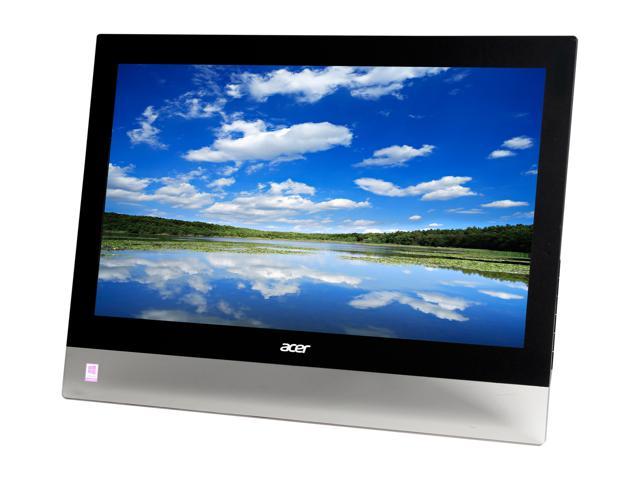 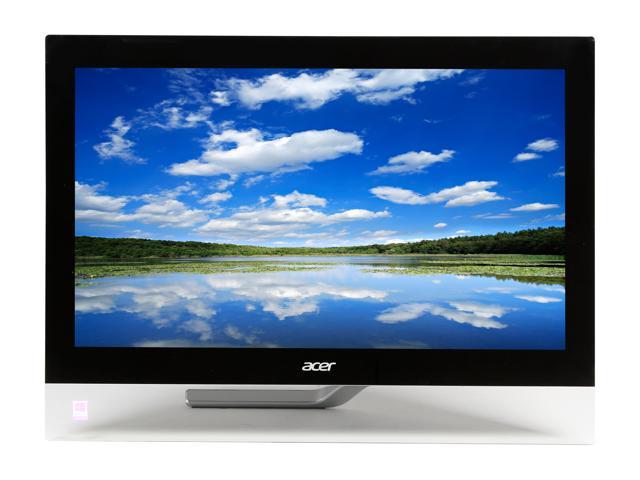 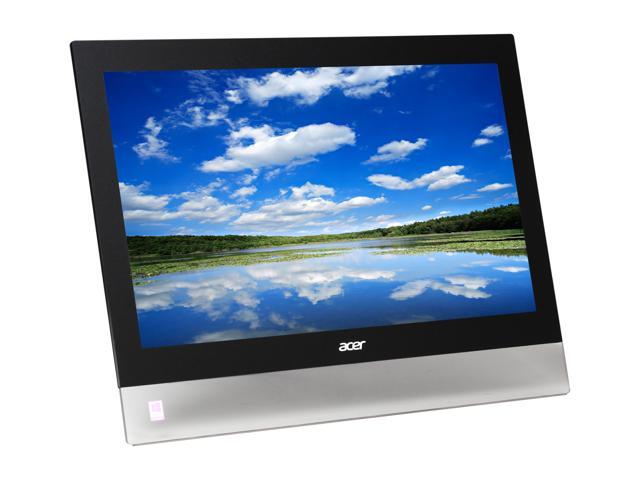 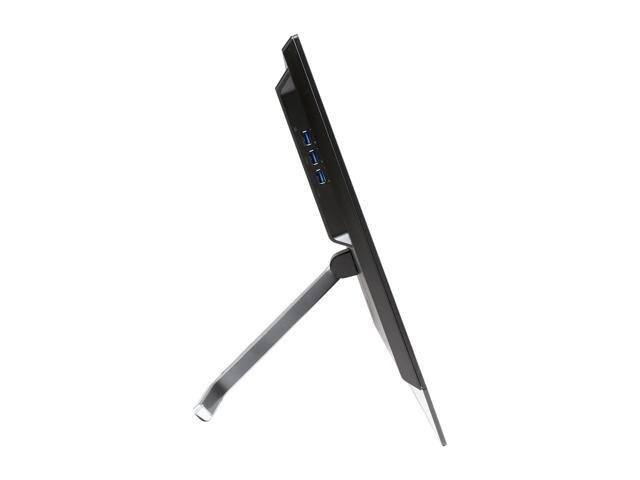 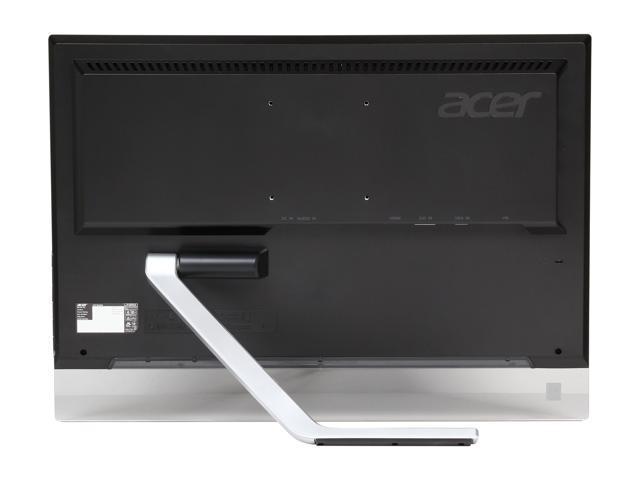 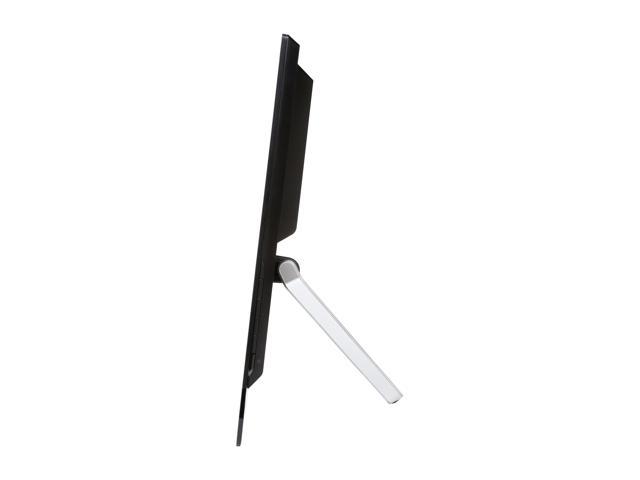 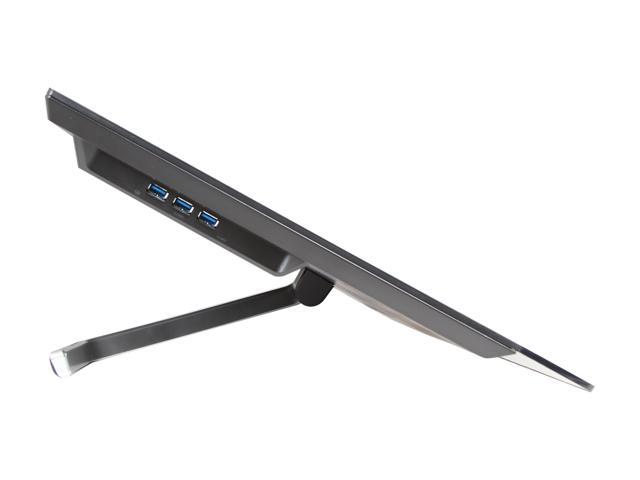 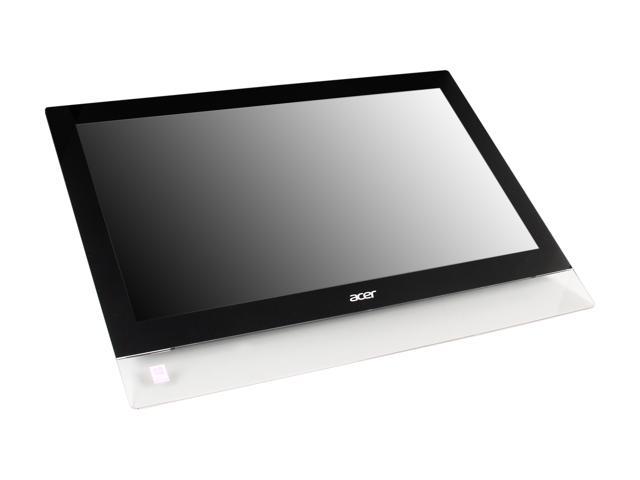 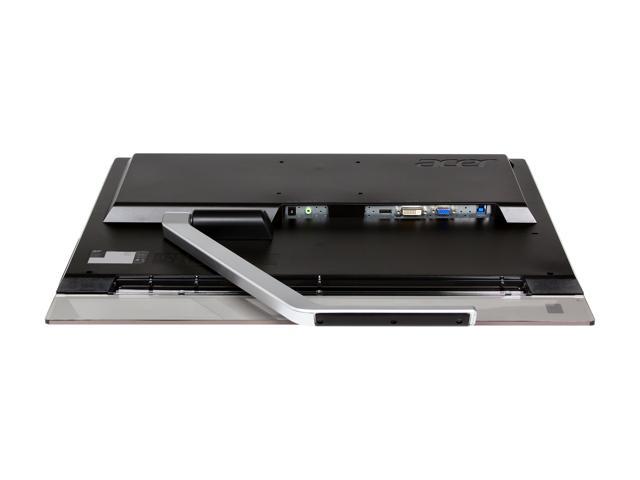 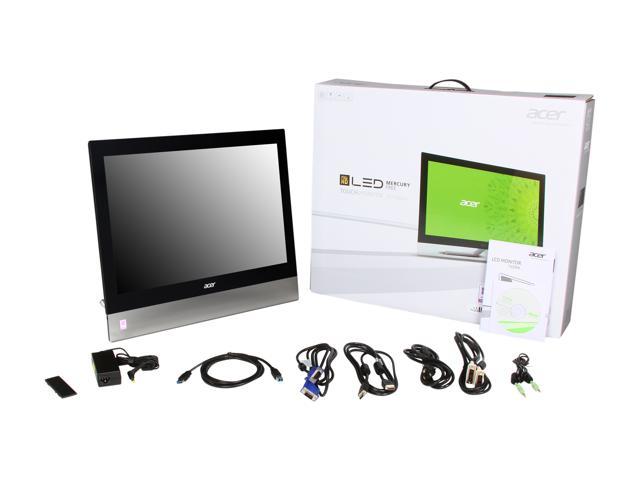 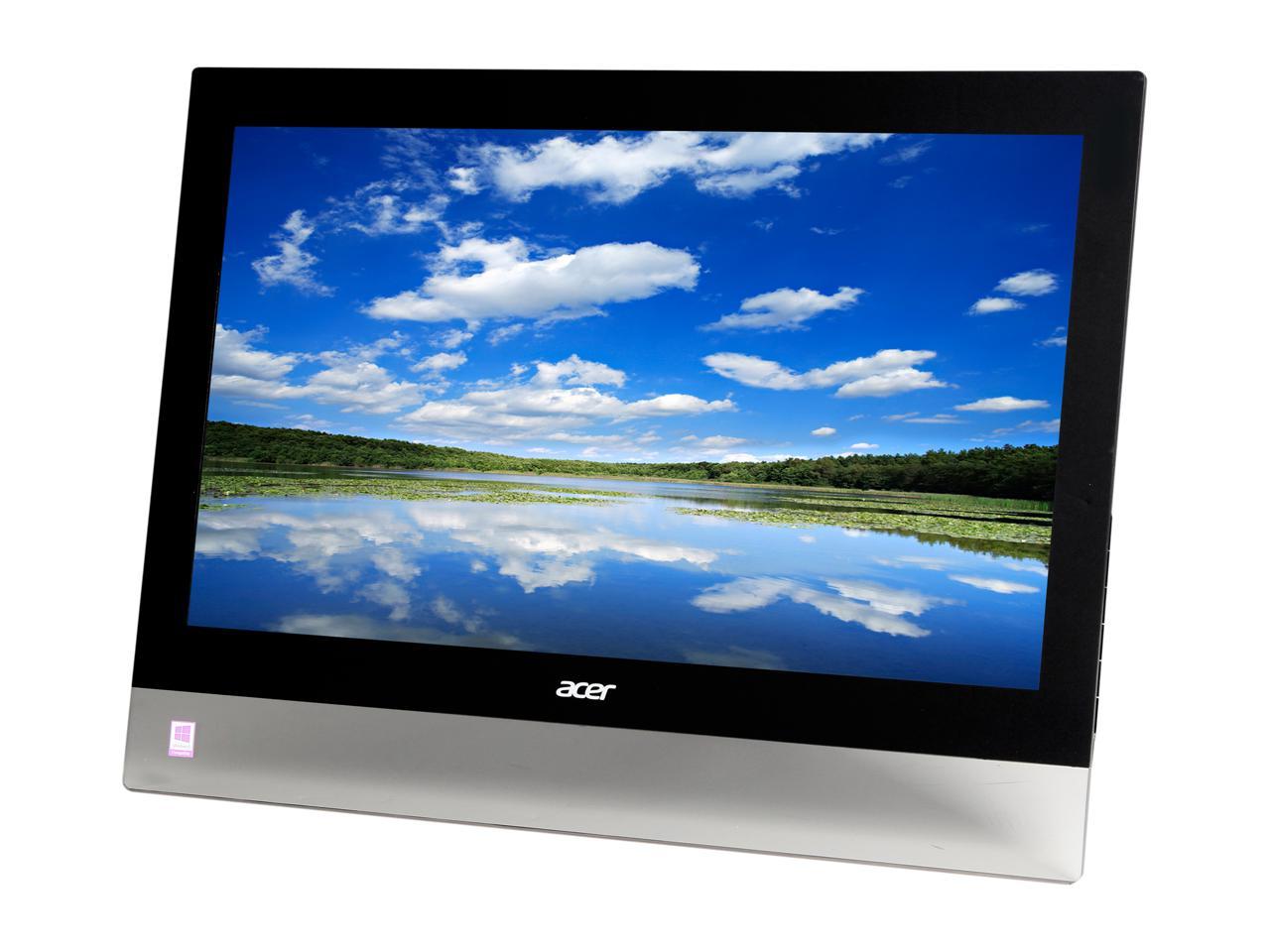 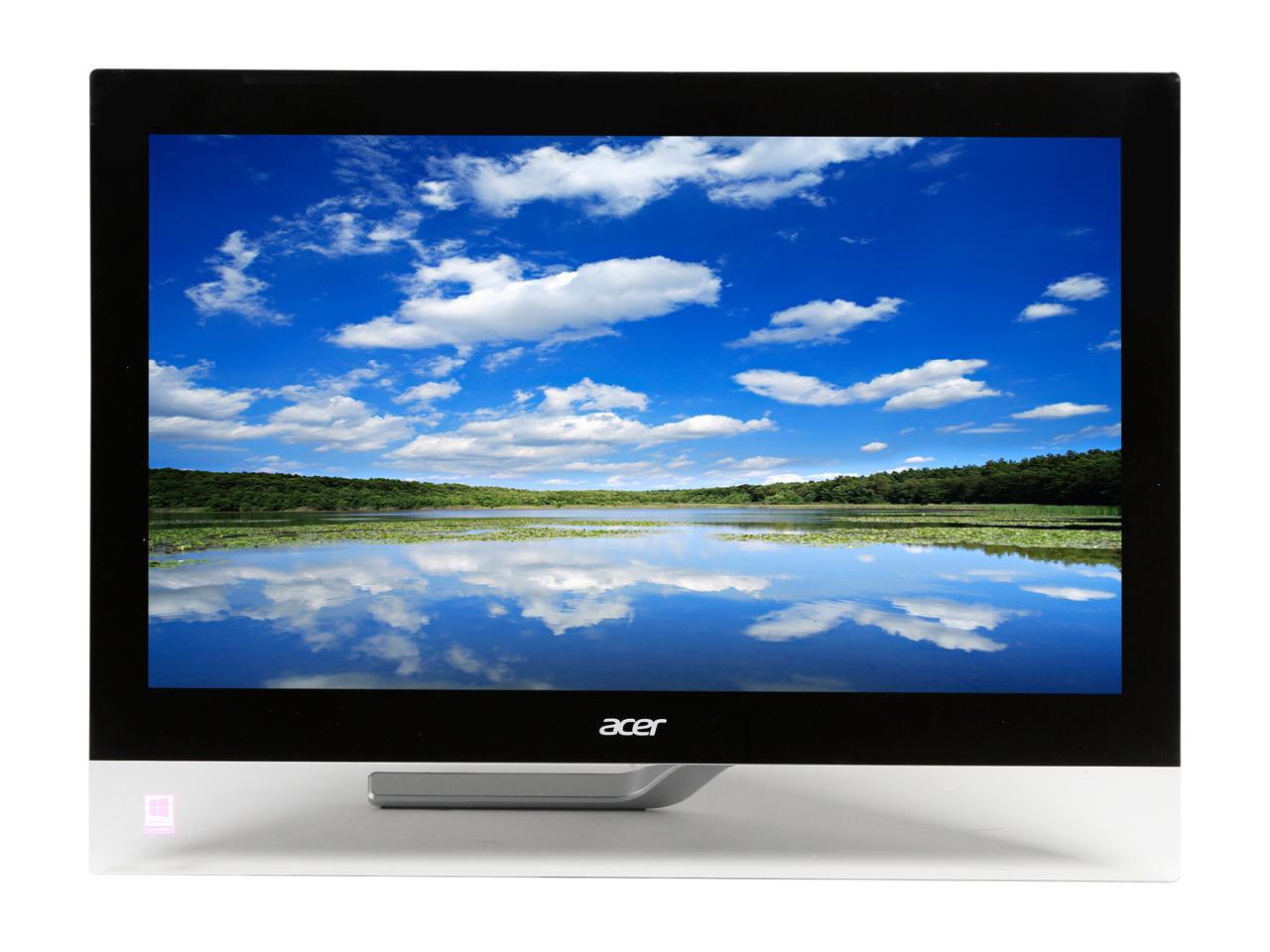 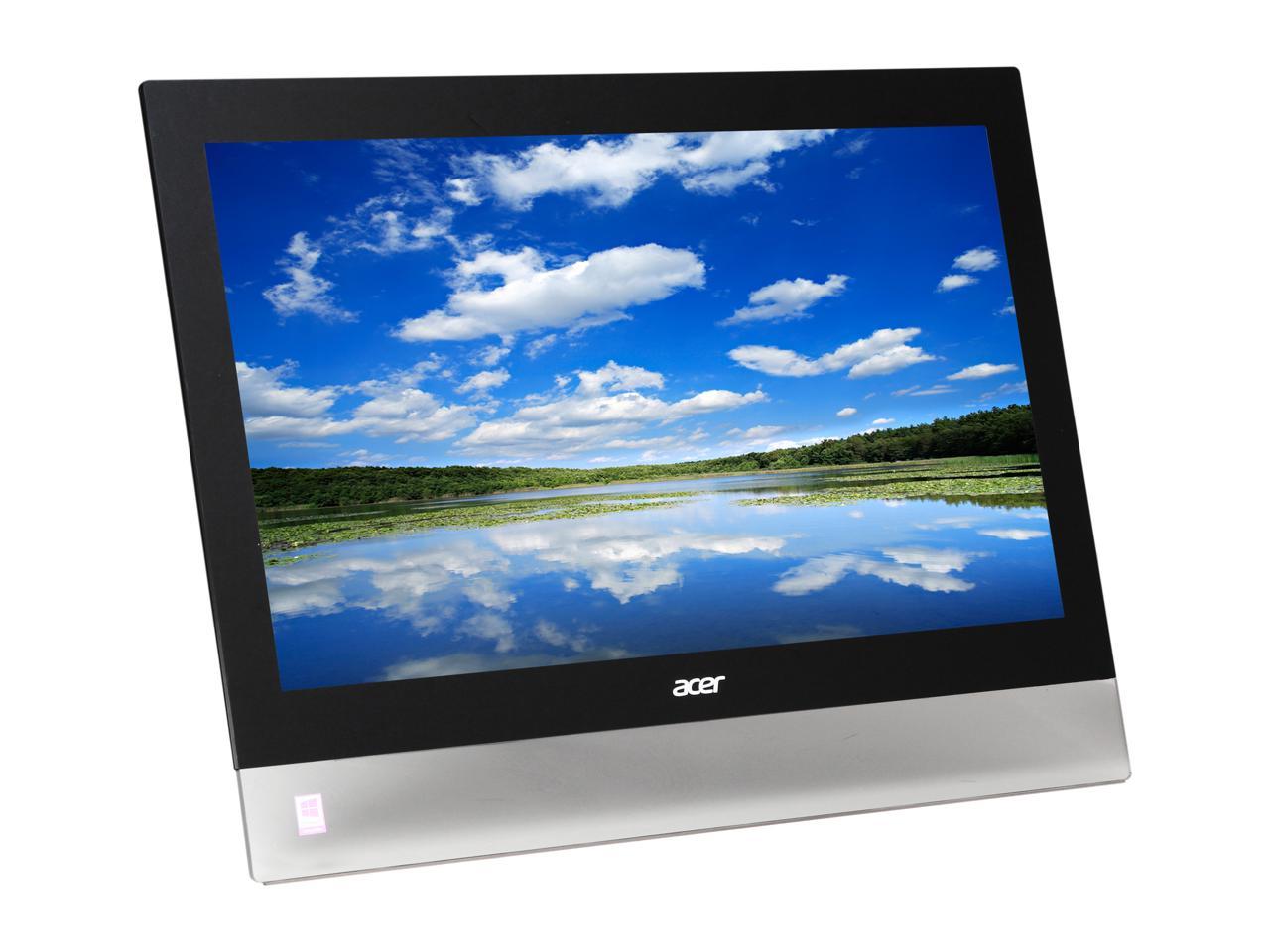 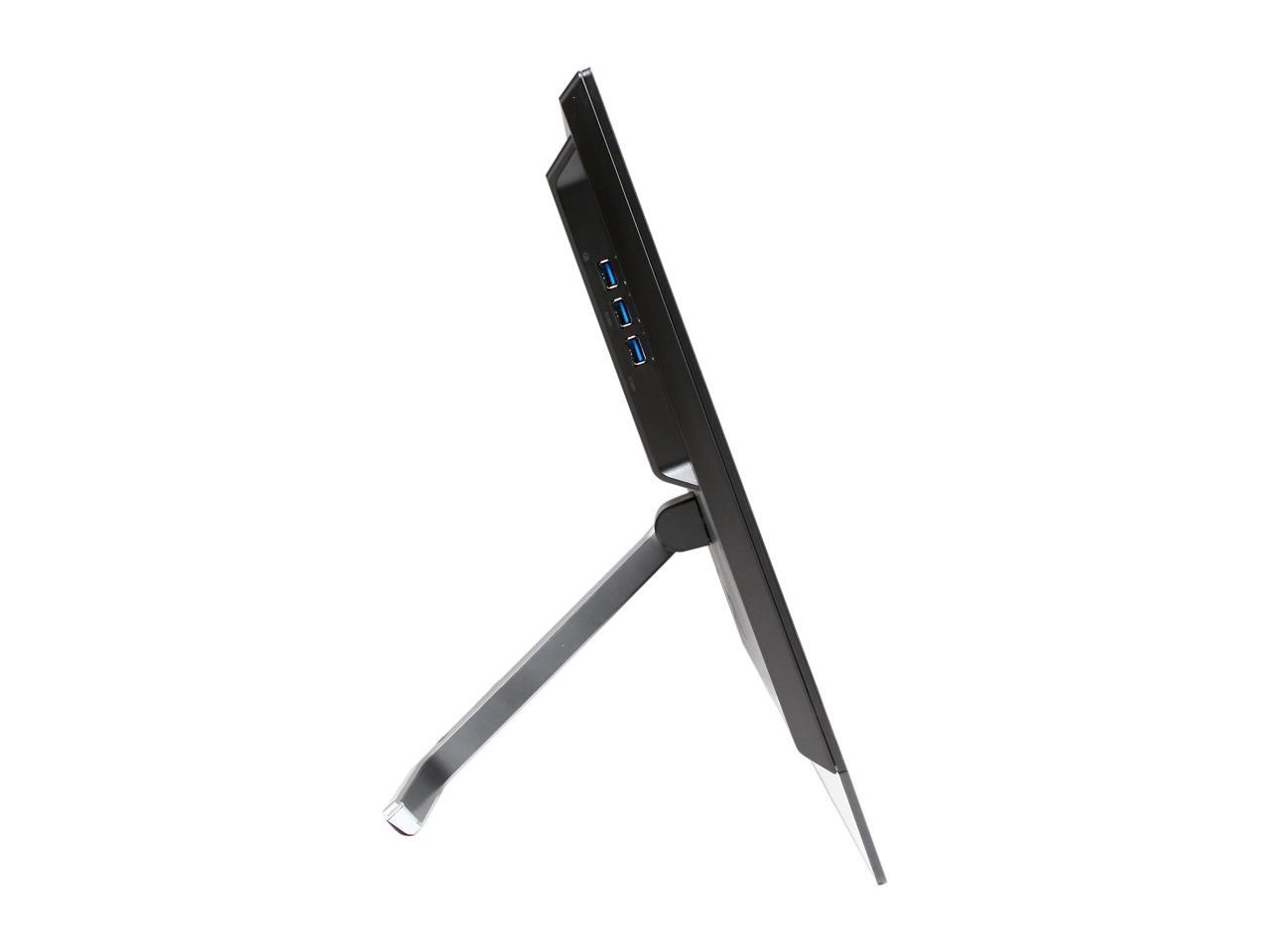 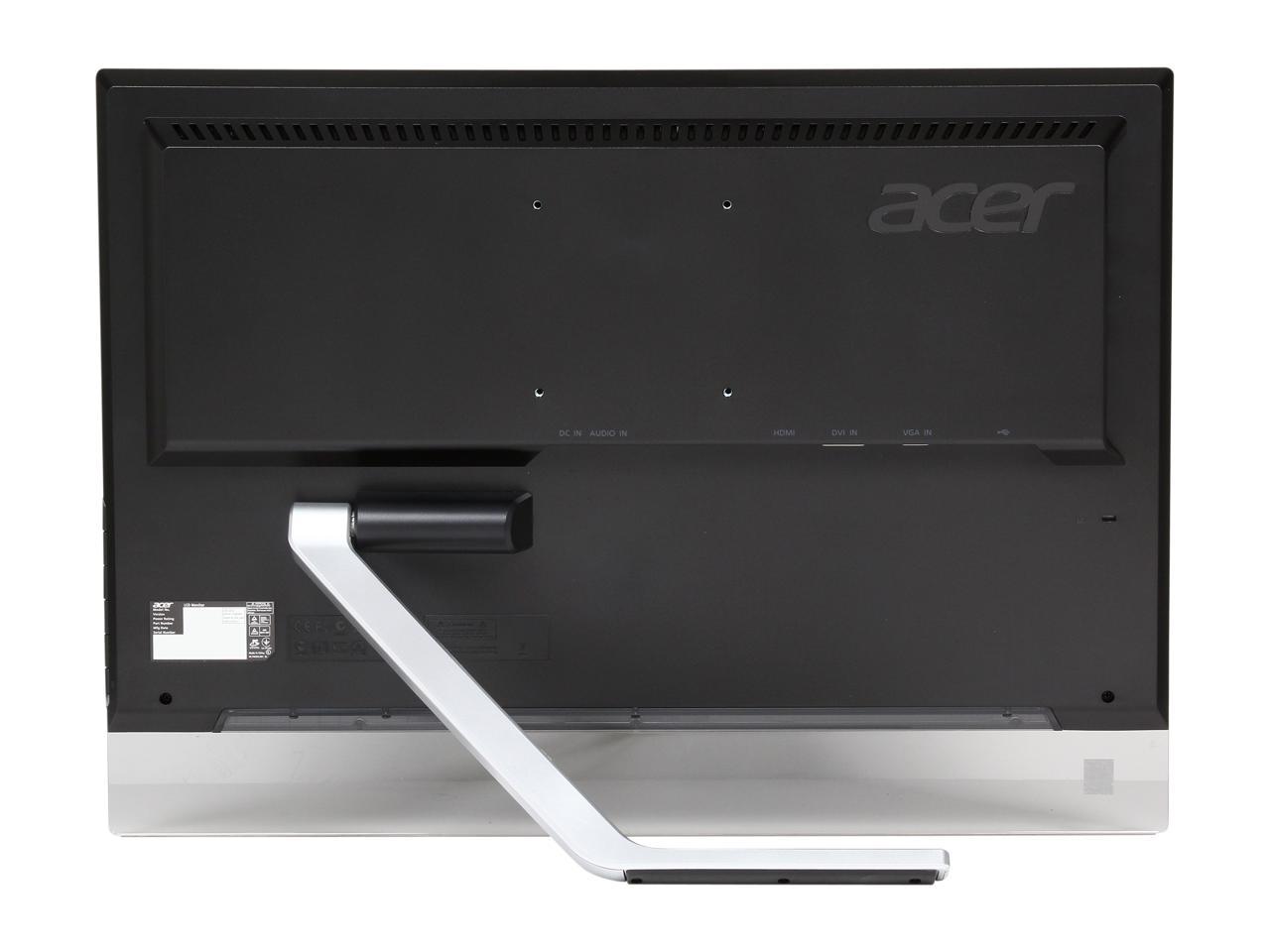 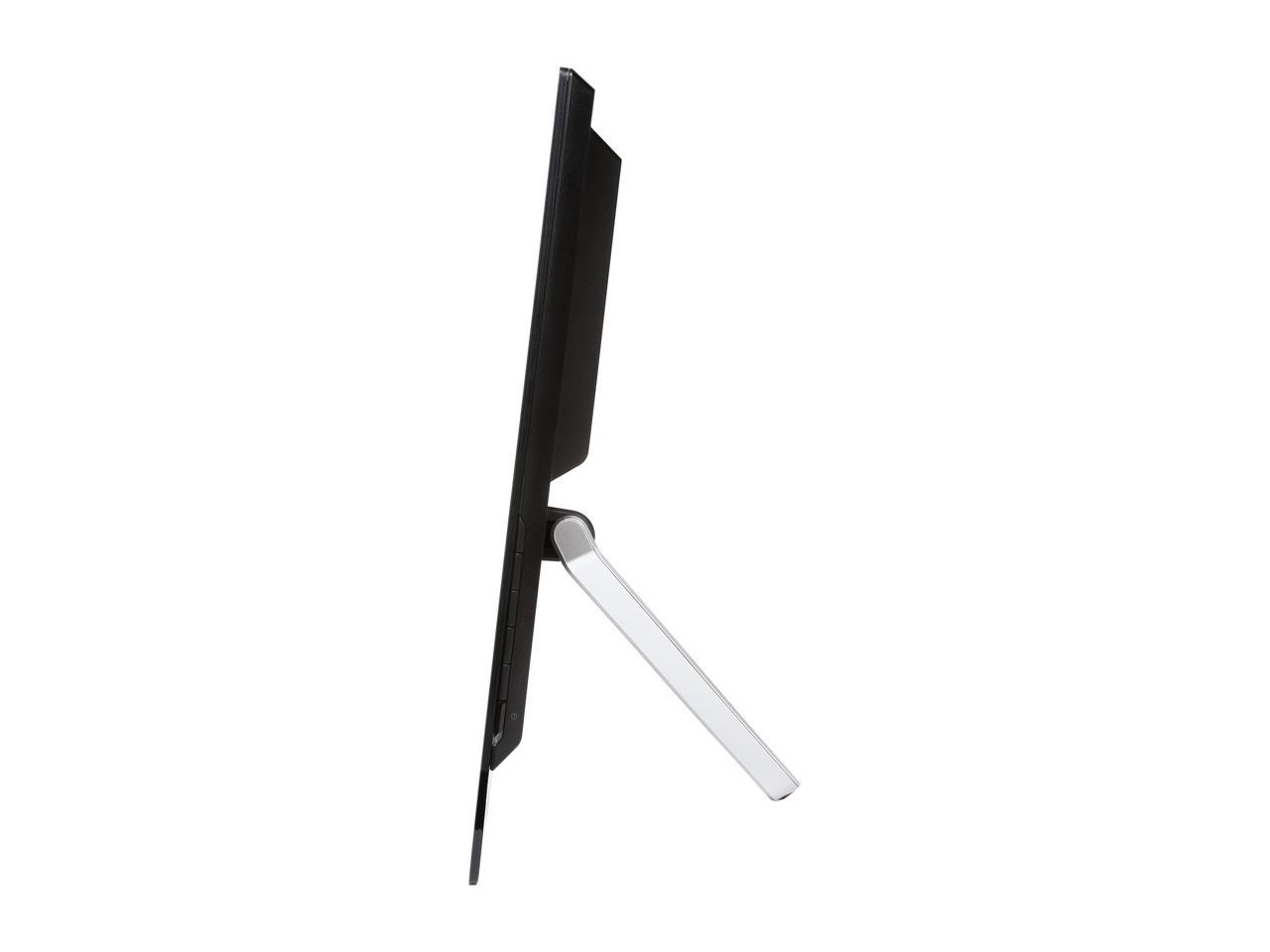 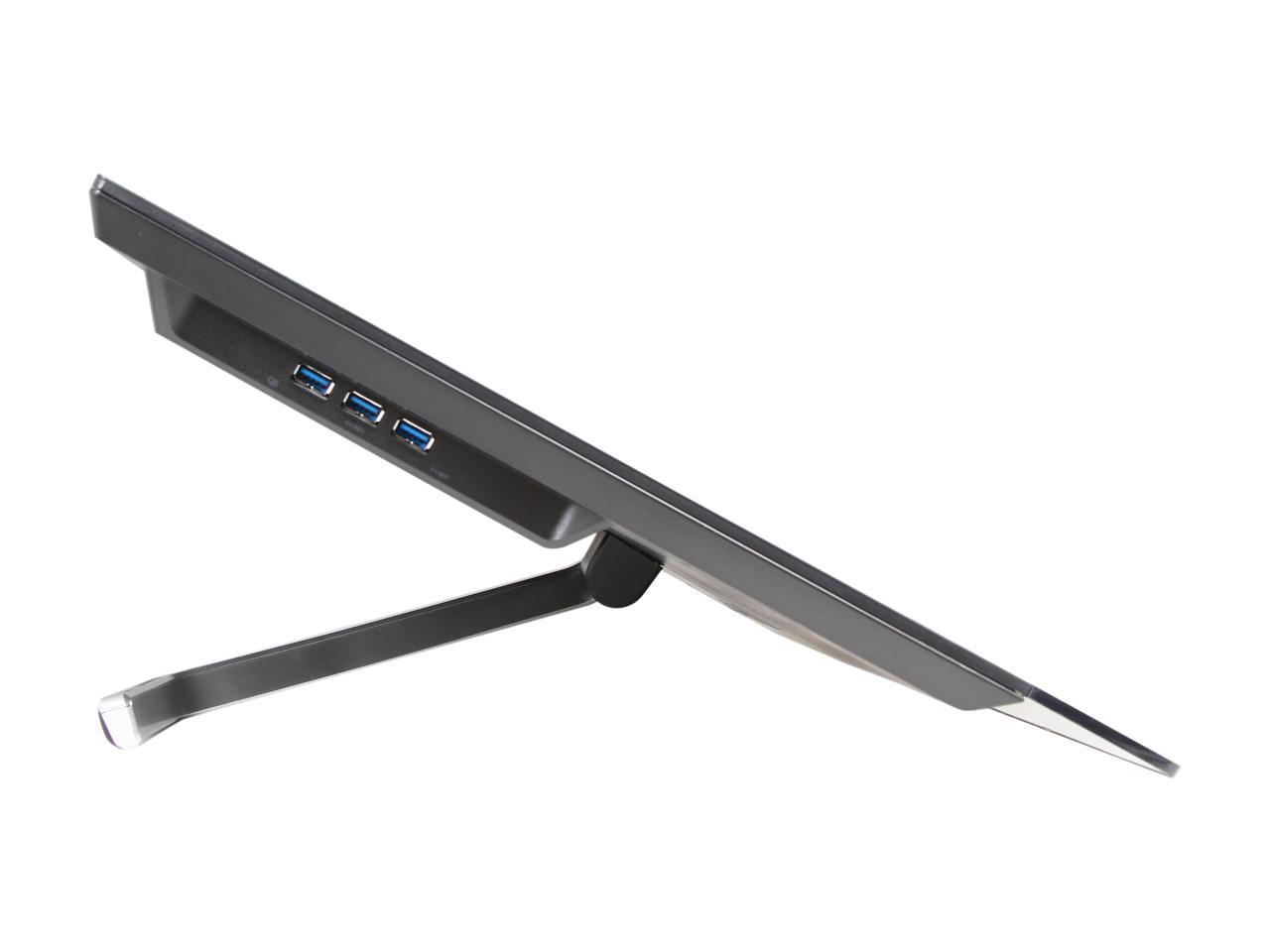 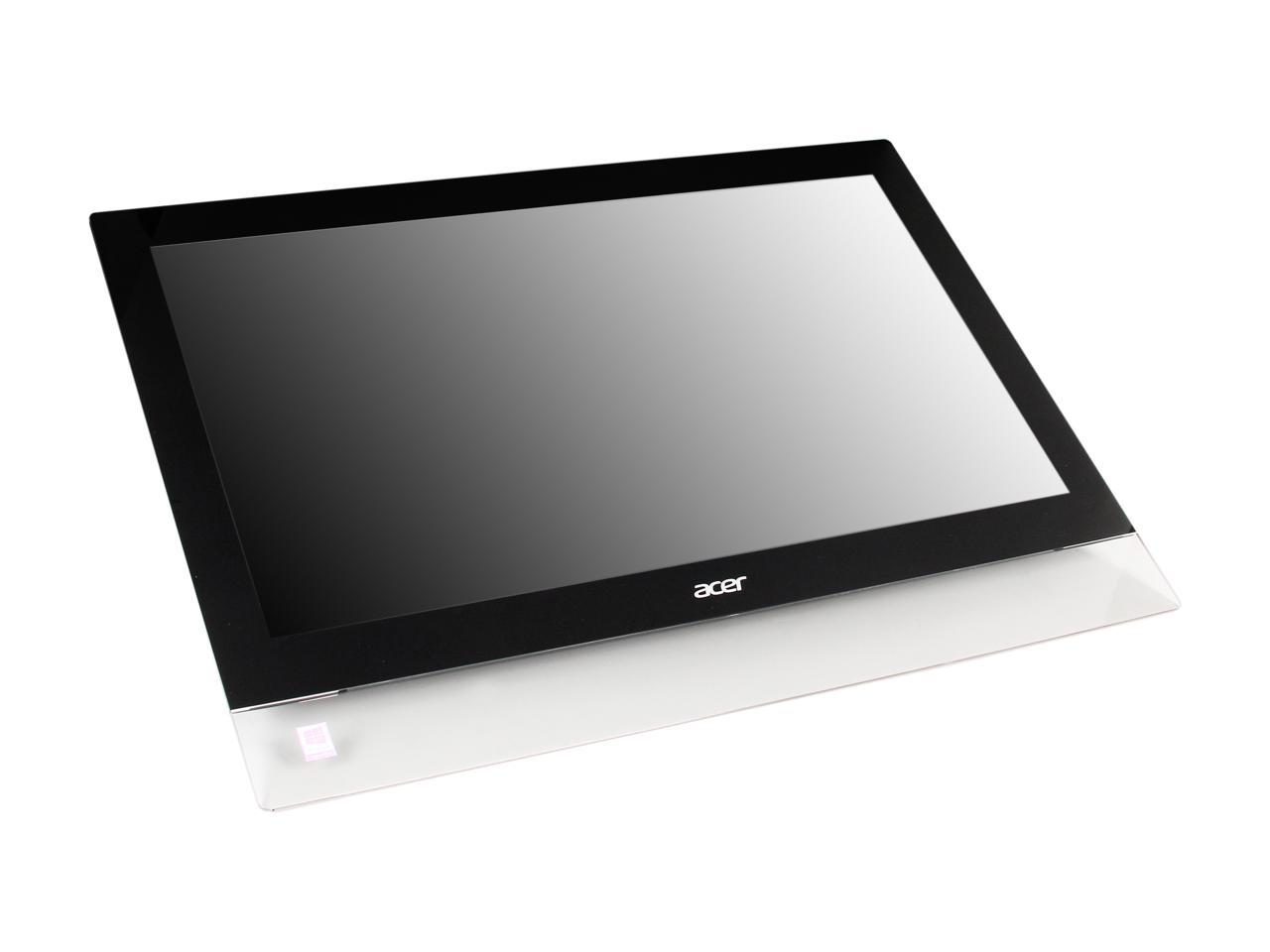 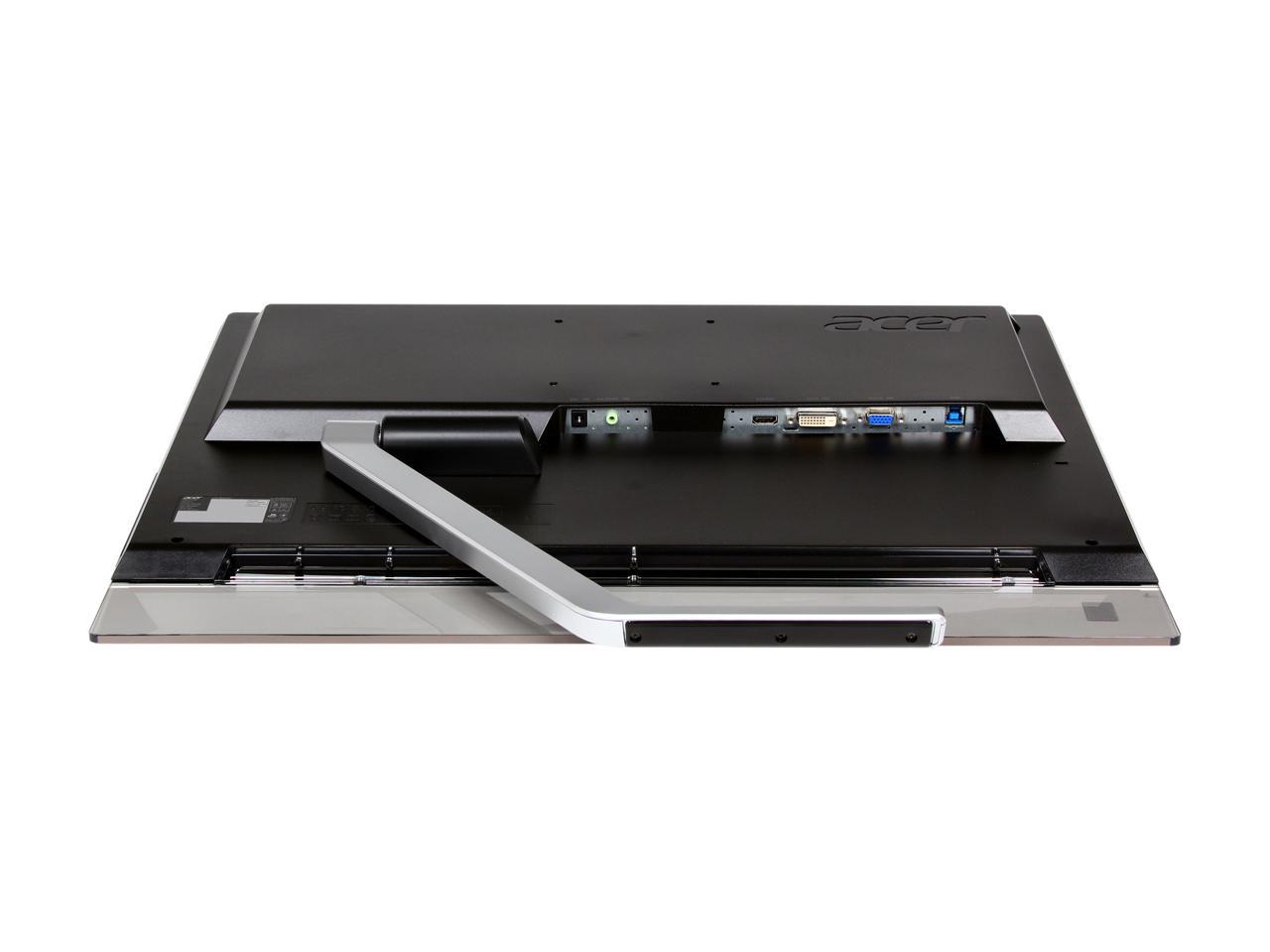 Pros: Clear, bright and responsive to touch. Love the ability to lay it nearly flat. Set up with zero fuss. Feels like the future.

Cons: Very minor: doesn't have a Start button like the Windows 8 tablets.

Overall Review: When I use this with the Maps app or viewing photos (with my fast computer) I feel like I'm in a Science Fiction movie, it is really frigging cool. To address some negatives I read in other reviews before buying: the bezel is wide to allow touch gestures that drag starting off-screen, something necessary for Windows 8. If there was custom gesture software from Acer I would not install it -- the point here is to have a Windows 8 experience, and the customization must come from that. Also Windows 8 did identify the monitor correctly. I don't write reviews much, and I don't particularly care for Acer, but they nailed the Windows 8 touchscreen experience.

Pros: Good size without being overwhelming on the desk (my desk is small) Bright (but not overly so) Sits low on desk (I'm short) Colors are nice and they pop because of the glossy screen and IPS tech. I did not have to color calibrate mine, it seems to be correct from the factory, as near as I can tell. Resolution is amazing compared to the 10 year old 19" 1440x900 ViewSonic that this has replaced. I gained so much screen real estate by going 1080p. Text is crisp and clear. Viewing angles are wide. Touch input was automatically recognized by Windows 7 Pro. I like that the Power light is on the side and can't be seen while you're at the computer. Some lights are just way too big/bright/distracting, but this one is invisible. Setup was easy, and it came with tons of different wires for all kinds of video hookup needs. No dead pixels.

Cons: Glare on the screen due to glossy surface. It's pretty bad. I gotta keep the extra lights off in this room, to keep it to a minimum. But I knew this would be an issue when I bought it. All glossy screens (monitors, tablets, phones) will reflect back at you, and the bigger they are, the more lights they'll catch and throw back at you. I just ordered an anti-glare screen protector to solve this minor issue. No big deal. Glare is not a flaw, just a byproduct of a glossy screen surface. No eggs docked for this. But be aware of this, as it could be a big problem for some people's environments. FYI and YMMV.

Overall Review: Some people reported having trouble figuring out the control buttons. They are on the right side of the monitor, and no they are not labled. The reason being is that depending on what part of the HUD menu you are in, will dictate what a particular button does. So each button isn't permanantly assigned a certain funtion; it varies. Just push the button that's level with the menu item you want, to access a certain feature. The bottom button is always your Power button, though. To access your HUD menu, push the button that's right above the Power button. Paper documentation is pretty lacking. The CD is just a users manual; I didn't bother checking it out. I probably should, though, just in case. Important notes: if you want to use the touch function, you need to hook up the USB 3.0 cable they give you in addition to the DVI or HDMI cable. Otherwise all you get is a regular monitor. And in order to get the touch funtion to work after you boot up, you must first turn on your monitor before you turn on the computer. In that exact order. FIRST monitor, THEN computer. I am quite pleased with this monitor. It's very nice. Would recommend to others.

Pros: Very high quality monitor and gorgeous picture. Honestly its the best monitor I have owned and for $300 its a steal.

Cons: Built is speakers are not great but good enough for me.

Overall Review: If you have Windows 8 this is the monitor you need.

Pros: Sleek, lightweight yet sturdy design. I like the fact it can be angled. The price seems good for such a clear and vibrant picture quality plus the fact this is a touchscreen. The responsiveness of the touchscreen is very good.

Cons: Wished they offered a 120Hz version and the menu interface is dated for such a modern design monitor. Other than those two minor nitpick issues I have no complaints or regrets.

Overall Review: Given the choice I would buy this again.

Pros: I purchased this monitor with my new ibuypower AMX-FX series NE641FX desktop. The monitor works great. Unlike other comments, I find the controls easy to use. This monitor was TOP Rated by PC magazine. The price is really a steal! Shop around and you will see that. This touchscreen in conjunction with the desktop is the way to go. It is far beyond the all in one's or laptops. It makes for an upgradeable system. Very impressed with Acer.

Pros: All cords and plugs included. Simple instructions. Win 8 didn't mess it up with this monitor and desktop. No bumps on border of monitor. Worked out of the box. Capacitive touch 10 fingers

Cons: Still leary of Win 8 but this install worked easily. It could be because the Acer Desktop running Win 8 had everything needed to run a Touchscreen monitor? USB 3.0 is needed. It may work with USB 2.0 but I don't know?? Not a con but older computers could have problems??? It is hard to have a con when everything works.

Overall Review: Desktops are old fashioned but they can work with Win 8 and Touchscreens. I wish Microsoft hadn't forced this issue but I guess their Apple stock wasn't making them enough money! It is too early to see how this mess will work with gamers? This Acer touchscreen helps ease the pain from Microsoft.

Pros: Touch screen for windows 8. with a great screen. has usb 3.0

Pros: This monitor is extremely bright and clear. Even compared to my other monitors with higher resolution (1920x1200 and 25.5" diagonal), it's beautiful to look at and touch. Including all the necessary cables is a nice touch, and the three USB 3.0 ports are handy. While the lower bezel is plastic, the rest is all glass, which is great for Windows 8 swipes. (The lower bezel can be removed as well, which is useful for wall mounting.) It's VESA (100x100) compatible, which means wall mounting is a cinch with any standard gear, and the multiple inputs (VGA, DVI, HDMI, as well as an extra audio input) are easily selectable.

Cons: Depending on your wall mount, you may need to plug in the connections before the wall mounting plate. Most of the inputs are in the center of the back of the monitor, and they may be covered up by the wall mounting plate. My mounts come about a foot off the wall, so it's not a matter of it being too close to the wall. The ports are just covered. Additionally, the USB connector is standard on the computer side, but proprietary on the monitor side. It's sort of a mix between the square USB connection and a micro USB connection, but all in one cable. It's not a big deal as the cable is included, but if that cable is lost or severed, it'll be a hunt to replace it.

Overall Review: I had some cons with this monitor, but it's fantastic for everyday use, both with touch and general use. It's very well suited for Windows 8, and the price, for the time being, is perfect for the size and resolution. With the 5ms response time, it's also well suited to gaming and HD video. For those curious, it's just a giant tablet screen for Windows 8. It'll take an hour or two to get used to the swipes and touched Windows 8 responds to, but once you know it, you'll want to touch every screen and expect a response.