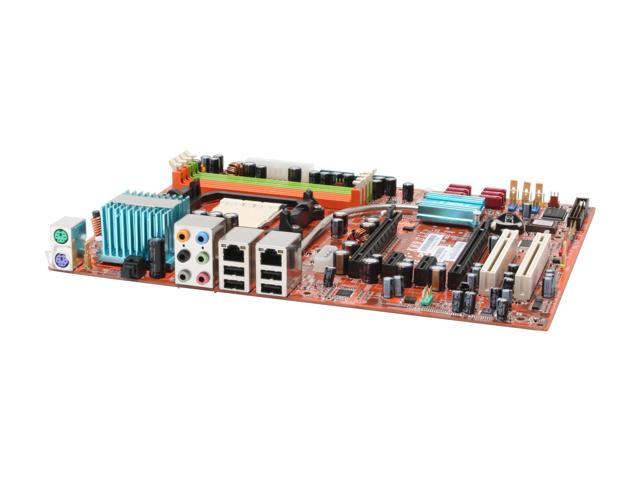 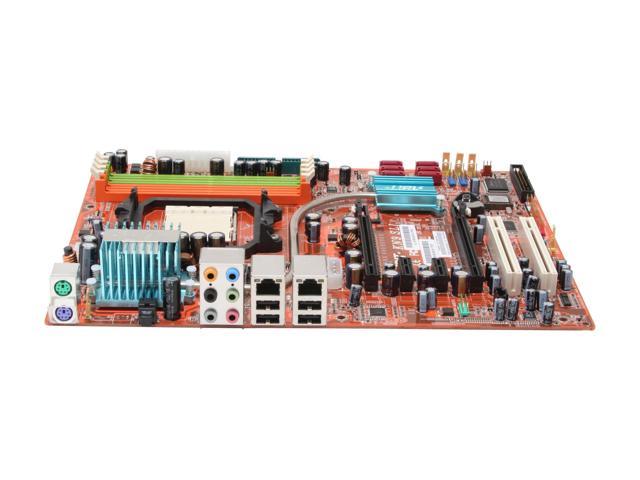 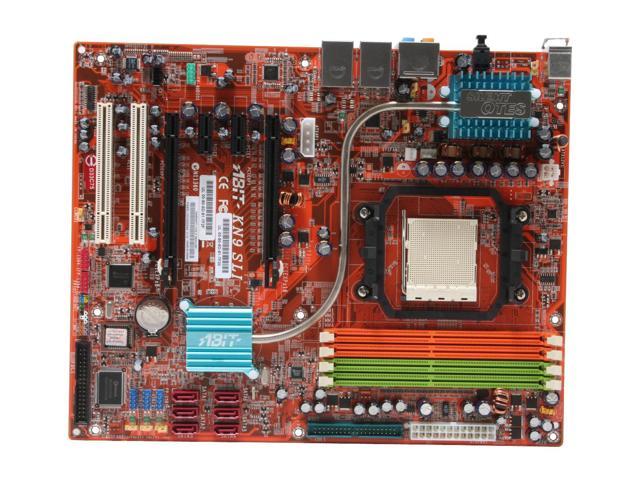 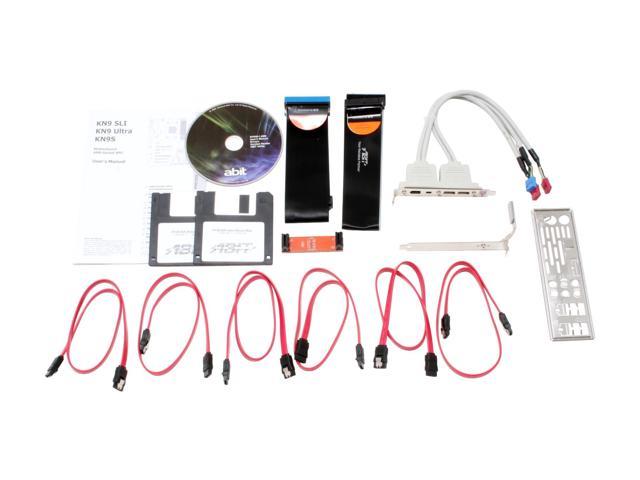 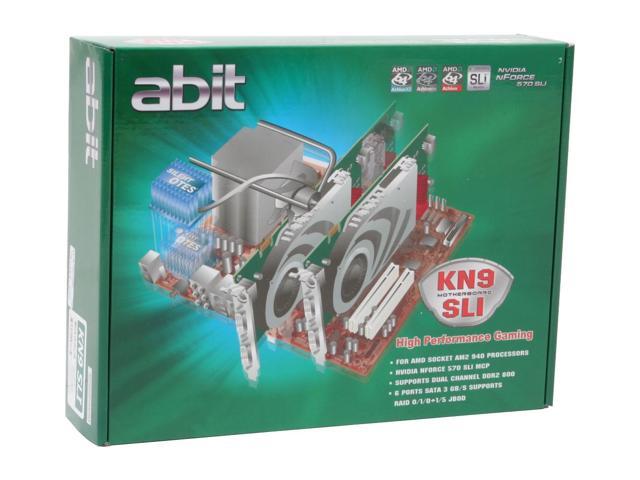 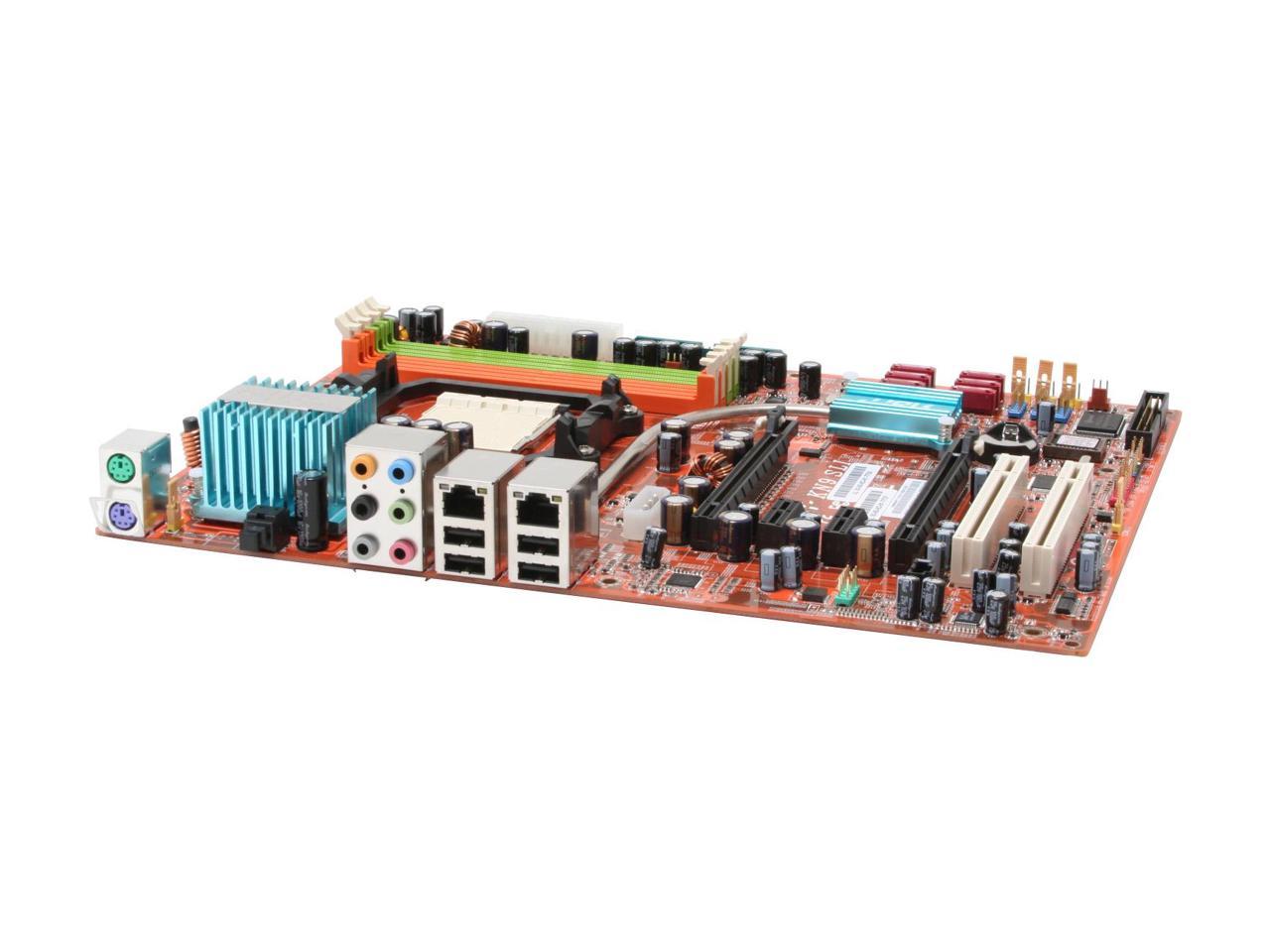 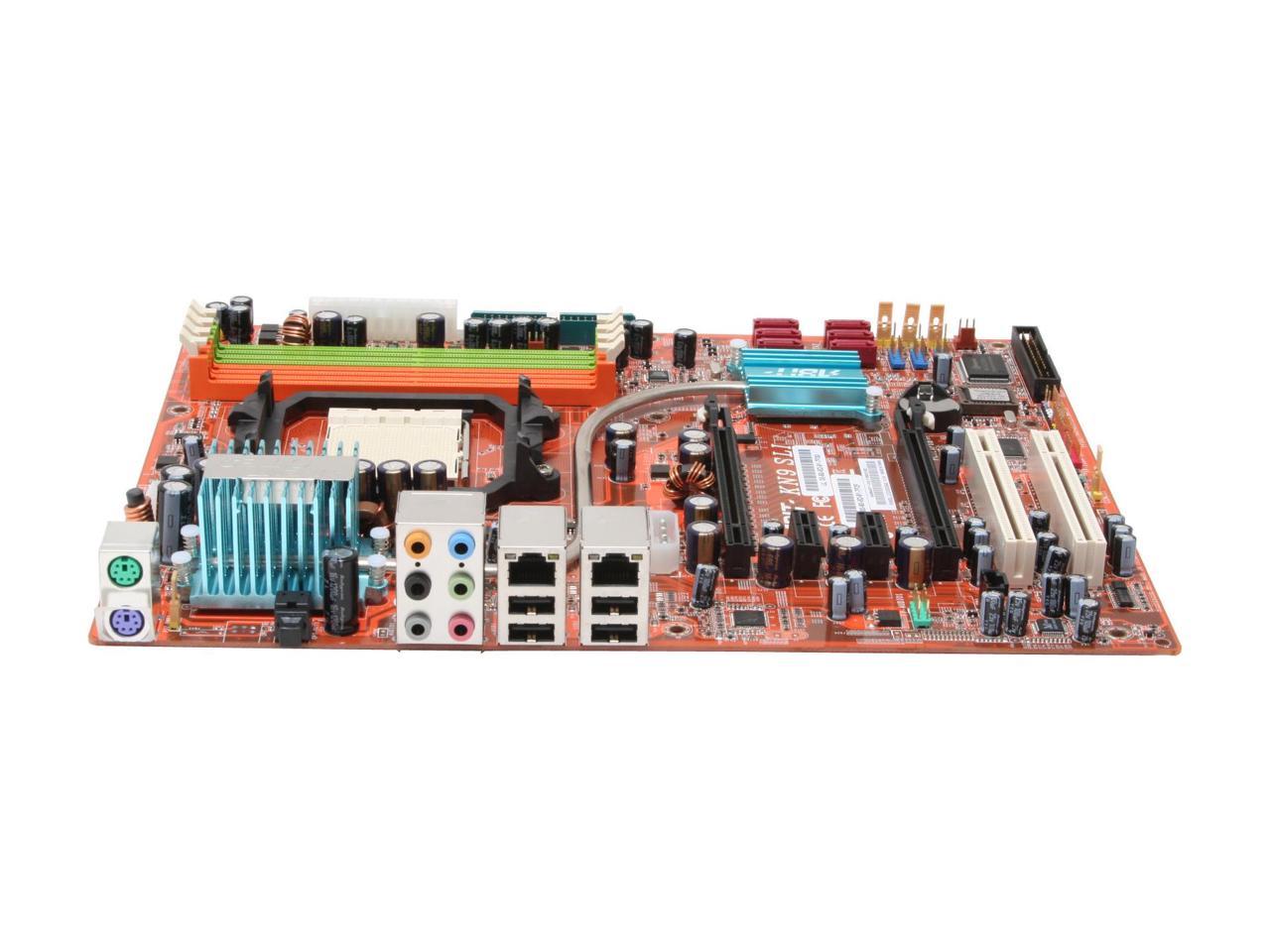 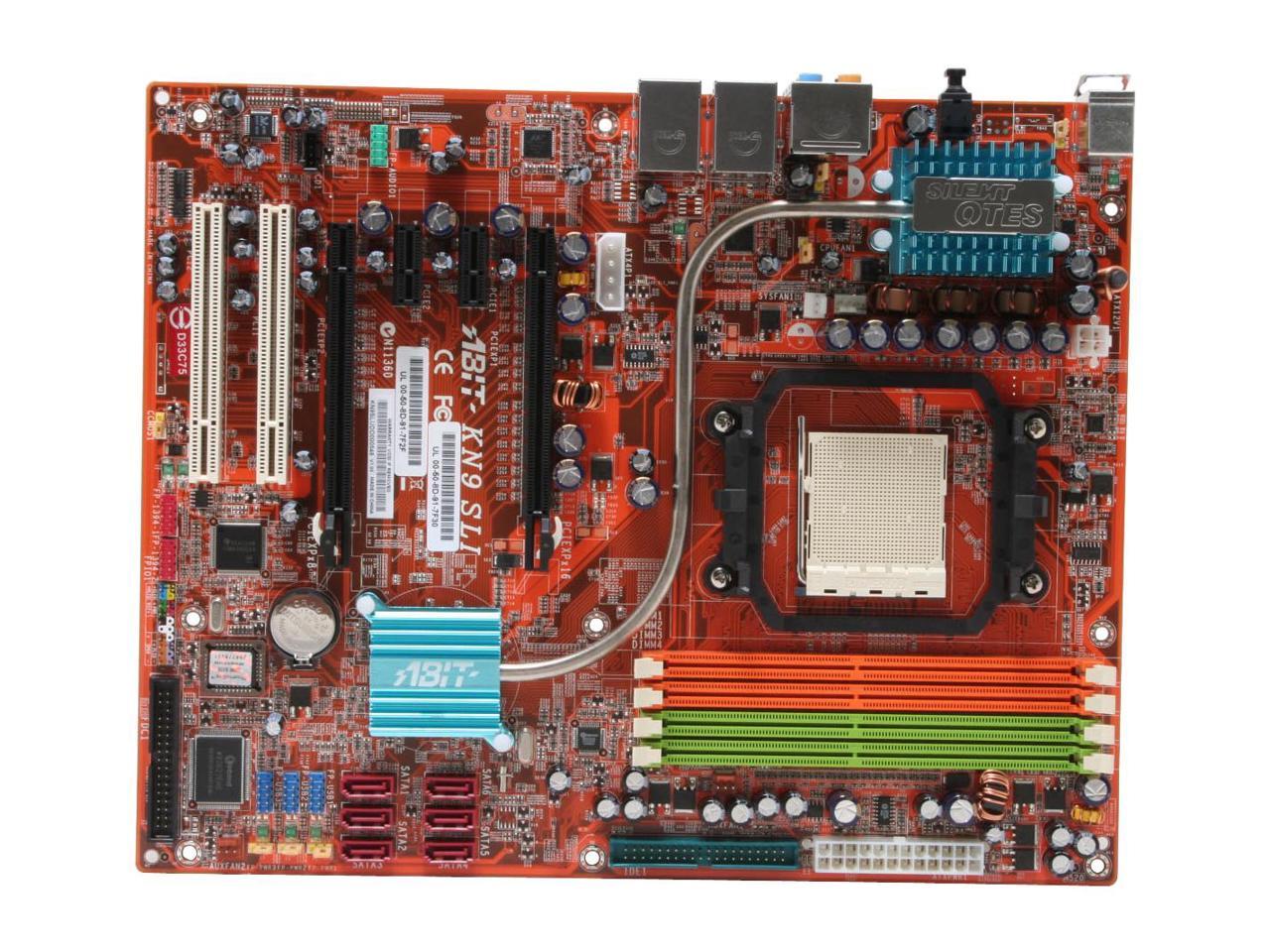 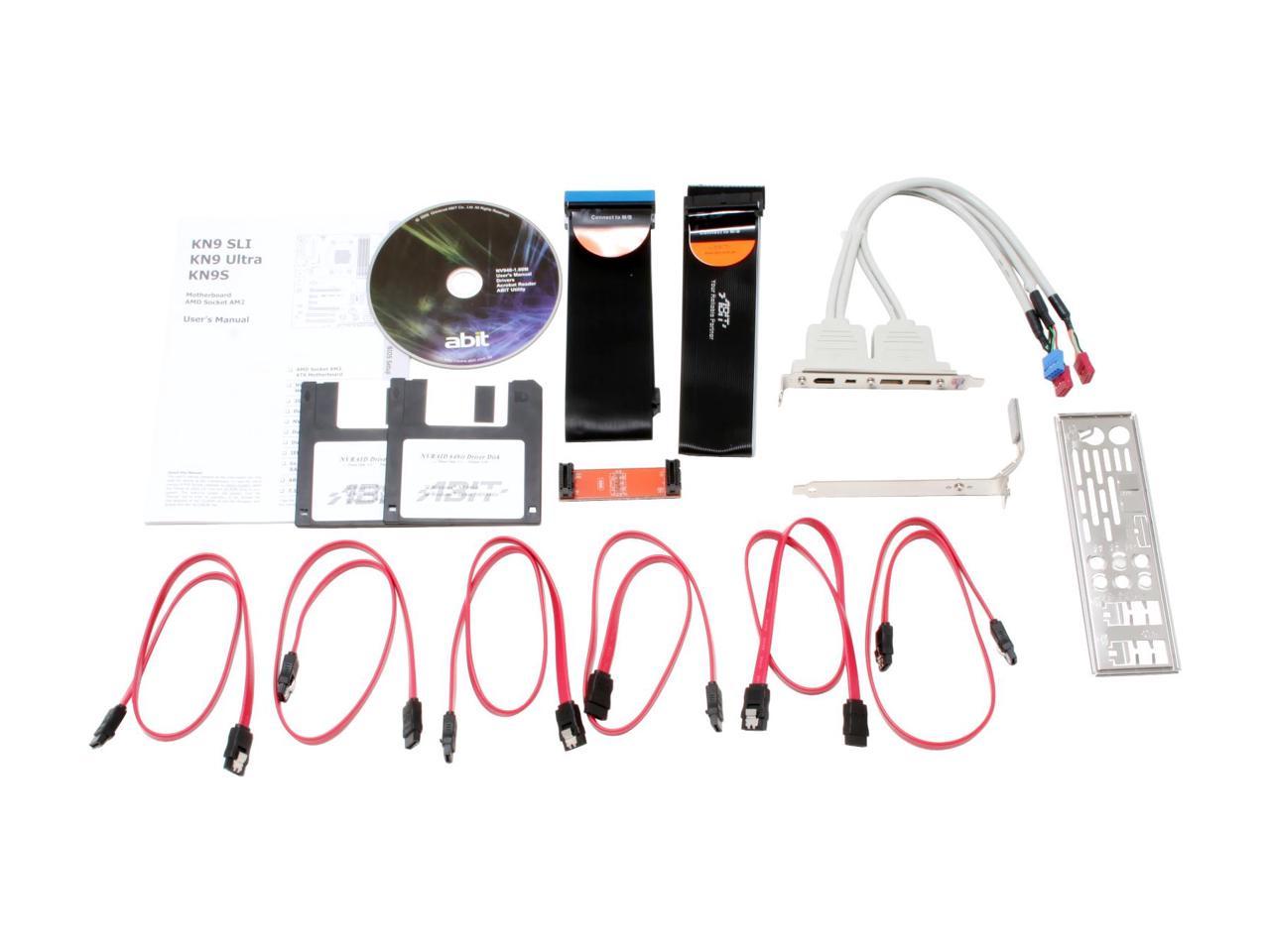 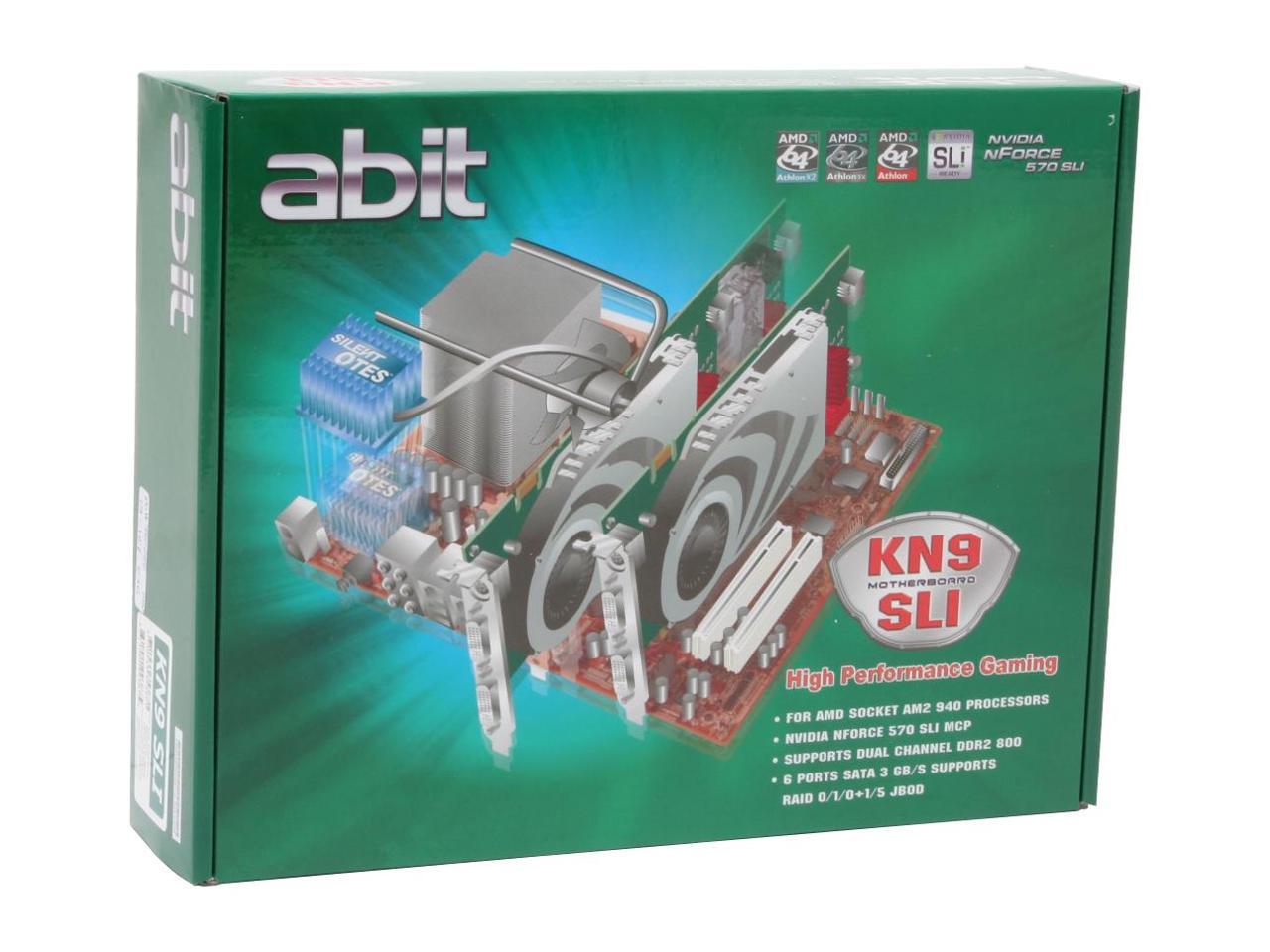 (107) Write a Review
OUT OF STOCK.
Overview
Specs
Reviews
A full-featured motherboard with plenty of power, the Abit KN9 SLI is great motherboard for anyone needing to replace or upgrade their system. Equipped with an AMD socket AM2, suitable for Athlon 64 processors, including the X2 and FX series, the KN9 SLI is more than capable of handling anything you may want to run. Using the Nvidia nForce 570 chipset the Abit KN9 SLI supports SLI which gives you the ability to use 2 graphics cards together for even more processing power.
It also includes dual gigabit Ethernet ports, 7.1 channel onboard sound, and 6 SATA ports. And because of those 6 ports, by adding multiple hard drives to the system the KN9 SLI supports RAID 0, 1, 0+1, 5, and JBOD. The KN9 SLI has multiple expansion slots to use including two x16, and two x1 PCIe slots, plus two additional PCI slots. Build a powerful system; the Abit KN9 SLI is a great foundation.

Overall Review: No moving parts on the motherboard. Sick and tired of other boards chipset fans failing.

Pros: I've built 4 PC's using AMD CPU's using ASUS, BIOSTAR, and now ABIT. The ABIT probably was the easiest yet. I never experienced any of the issues others have reported. The BIOS was the lastest, which leads me to believe I've got a later rev motherboard. SATA drivers worked out of the box, USB works correct, no heat issues.

Overall Review: I would say something about the other PCI slots below was a lil tight, but then again the graphic cards got huge, but i dont plan to add a new peripheral soooo... I had no issues that the other people state. I had a V1.0 board and all I did was power up, flash the new bios, restarted, fixed bios, and then I installed XP on a SATA HD .. *shrug* luck?

Pros: I like this board. Was nervous with the bad reviews but I got to tell ya that it works great. Only problem was a result of bad DDR2 stick causing crashes. Using other good stick of ram (till my new ram arrives) with no problems at all. Very stable. Makes me happy that I bought this board for this price. Very good chipset. Using 4000 single-core 2.6ghz cpu while I wait for the fast dual-core cpu's prices to drop. Don't let the bad reviews scare ya. I believe 90 percent of those bad reviews were probably solveable. Abit website is not up to date regarding supported cpu's. My 4000 2.6ghz was not listed but I called Abit to verify. This board is a very good deal. You'll be happy.

Cons: Only one IDE. Both my harddrives and both dvd drives are IDE. Good reason for me to final go with sata.

Overall Review: Wasn't impressed with support with my only conversation with Abit (not for problem but cpu support).

Pros: Lots of features, and my second board works great. BIOS update fixed most issues.

Cons: I had to RMA the board to fix an issue where the ePCI voltage would rise until the system crashed after a cold start.

Cons: ... I am having the same USB problem described by others. When playing a game (such as GRAW, Spellforce 2, the BF2142 demo, etc.) the USB mouse and keyboard will be disabled, leaving me with no choice but to do a hard reset. According to others, this has to do with the PCIe voltage going too high, i.e. above 1.65V. I have run the ABIT EQ tool to see this happen: as soon as a game is launched, the PCIe voltage goes too high, and eventually the USB failure occurs.

Overall Review: I am temporarily working around this by using the PS/2 ports instead, but having high voltage can't be good for the system long-term, so I will try to do an RMA with ABIT. (This board is now three months old, so I can't RMA with Newegg.)

Cons: I've had two of these boards and both have the same issue. Random static on the audio channels and high PCIE voltage (there are 11 pages in the abit forum about the high pcie voltage). This seems to be a known issue with some versions of this board.

Overall Review: I was able to return the first board to newegg as it was under 30 days. The second however I've had to deal with abit and their horrible RMA process. In order to cross ship you have to pay them upfront (via paypal :() and when they receive the old board they refund you most of what you paid. It ends up you having to pay abit $x for them to fix their board.

Pros: Better layout than previous Abit boards. Fan headers, power connectors, etc. The only exception is the CMOS jumper which is now underneath the bottom PCI slot. Very overclockable like all Abit boards.

Cons: If you currently use a VIA chipset mobo and use the VIA Raid utility, then you are going to hate this board. The NVidia RAID setup and utility is a pain to use -- very cumbersome. With the VIA utility, you could basically hook up a 2nd HD in RAID at any time and it would mirror it for you. If the NVidia RAID lets you do this, then I can't figure out how. Also, this board doesn't include the Post LED display, which is a nice feature on some of Abits other boards.

Overall Review: This board has had some mixed reviews, BIOS flashing, USB issues, memory issues, etc. I flashed to BIOS 13 with no problems. I didn not have any issues that others seemed to have. Running 2 GIG (2x1024) sticks of Corsair XMS2 675 Ram. OCd the ram to 777MHZ with no problem.