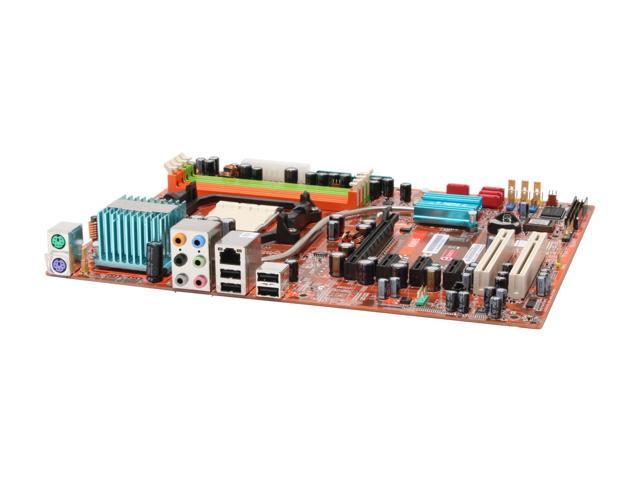 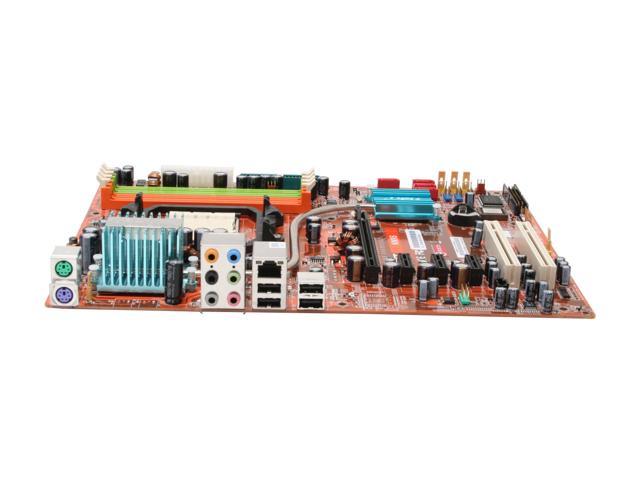 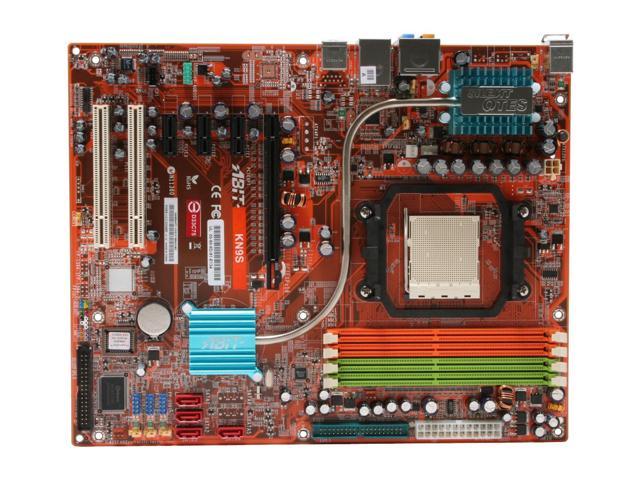 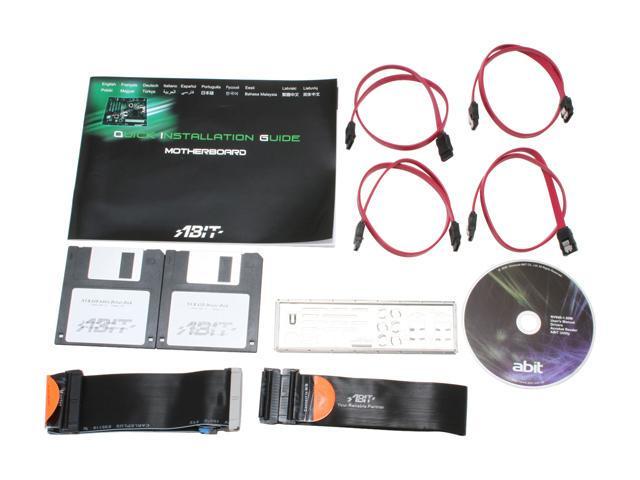 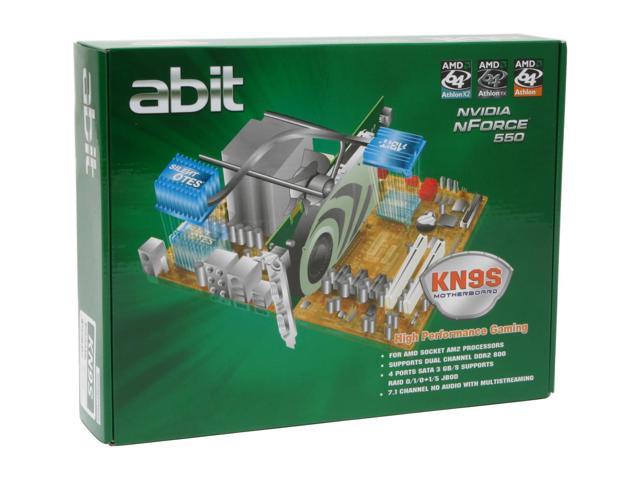 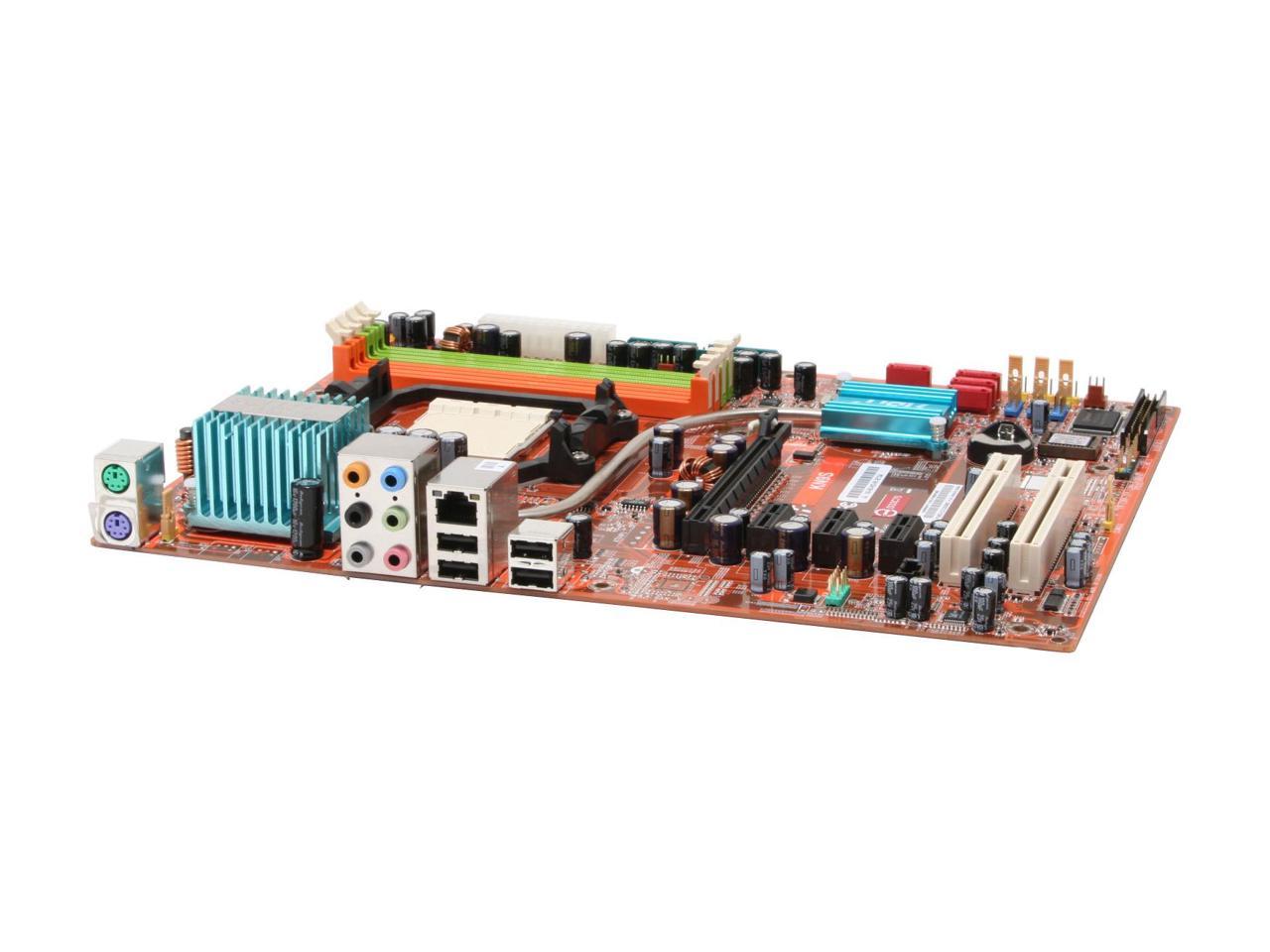 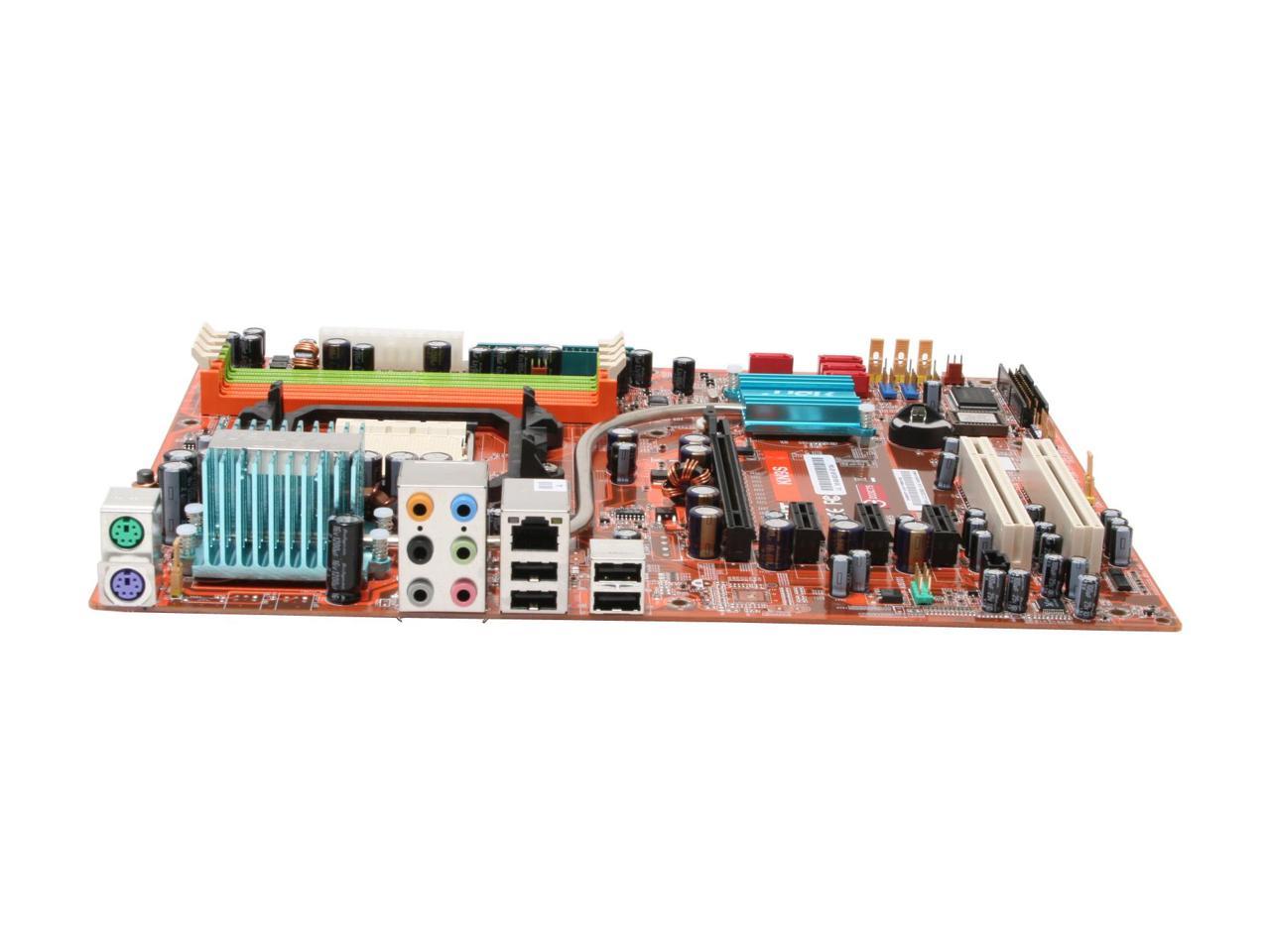 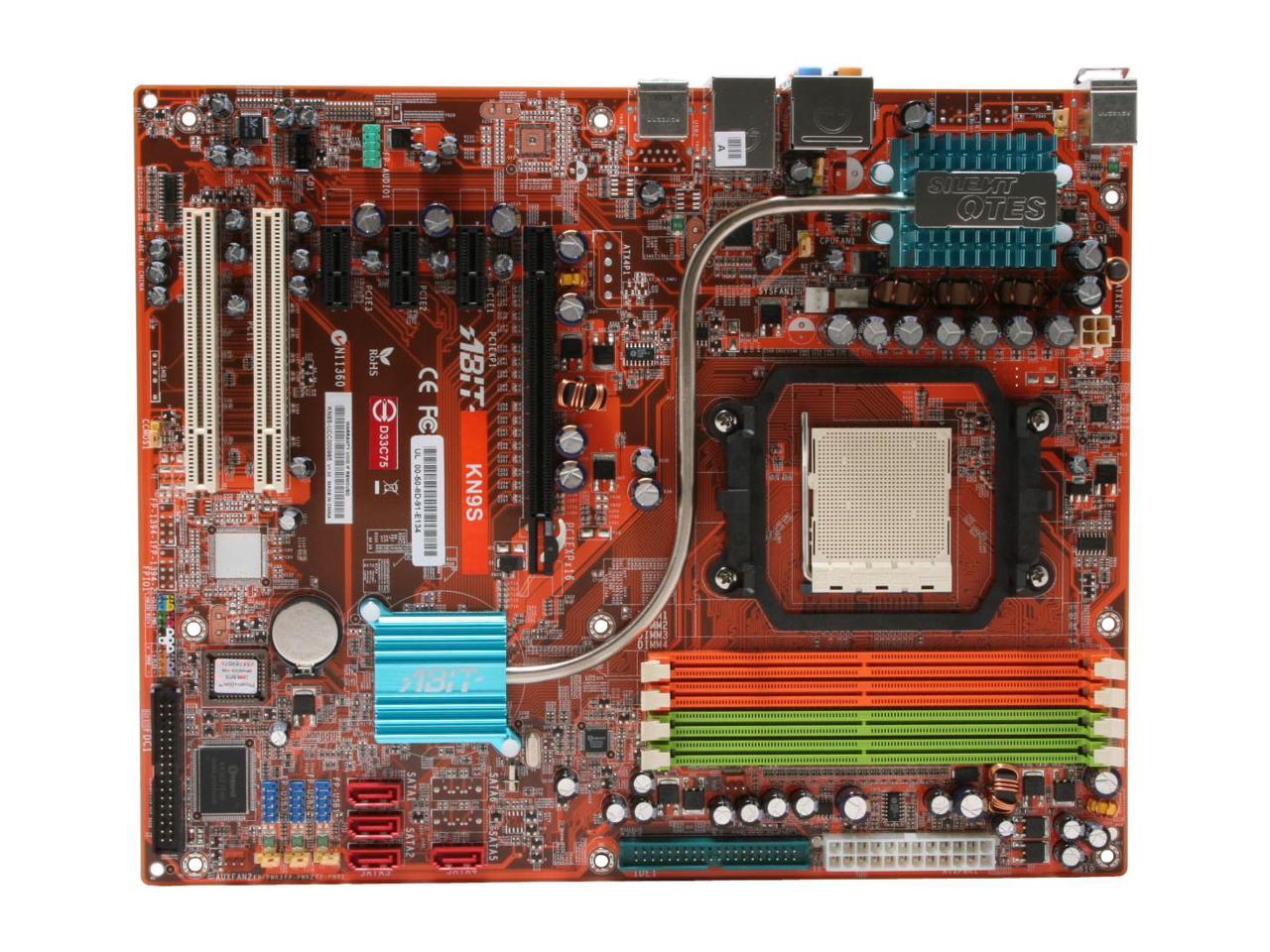 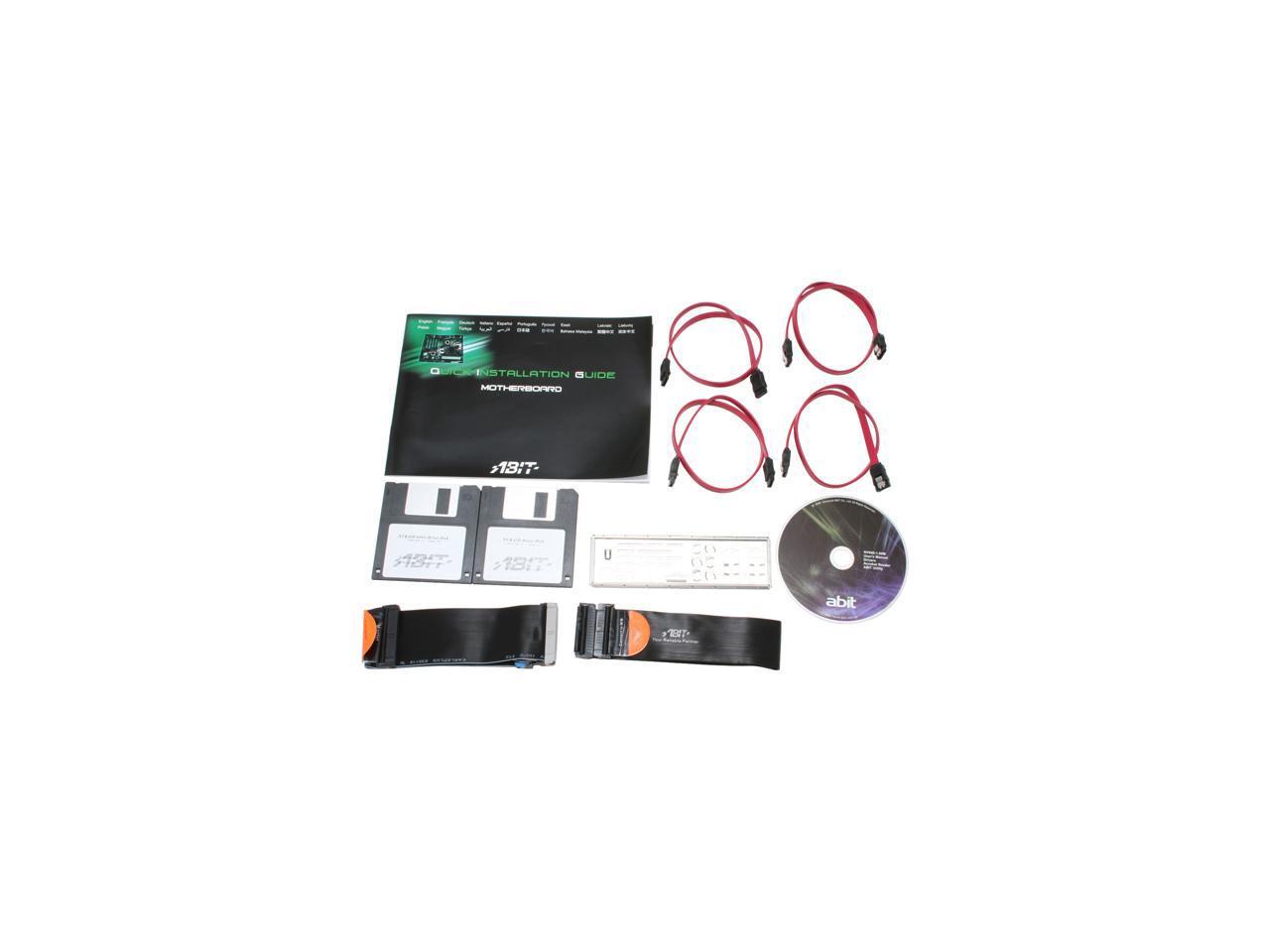 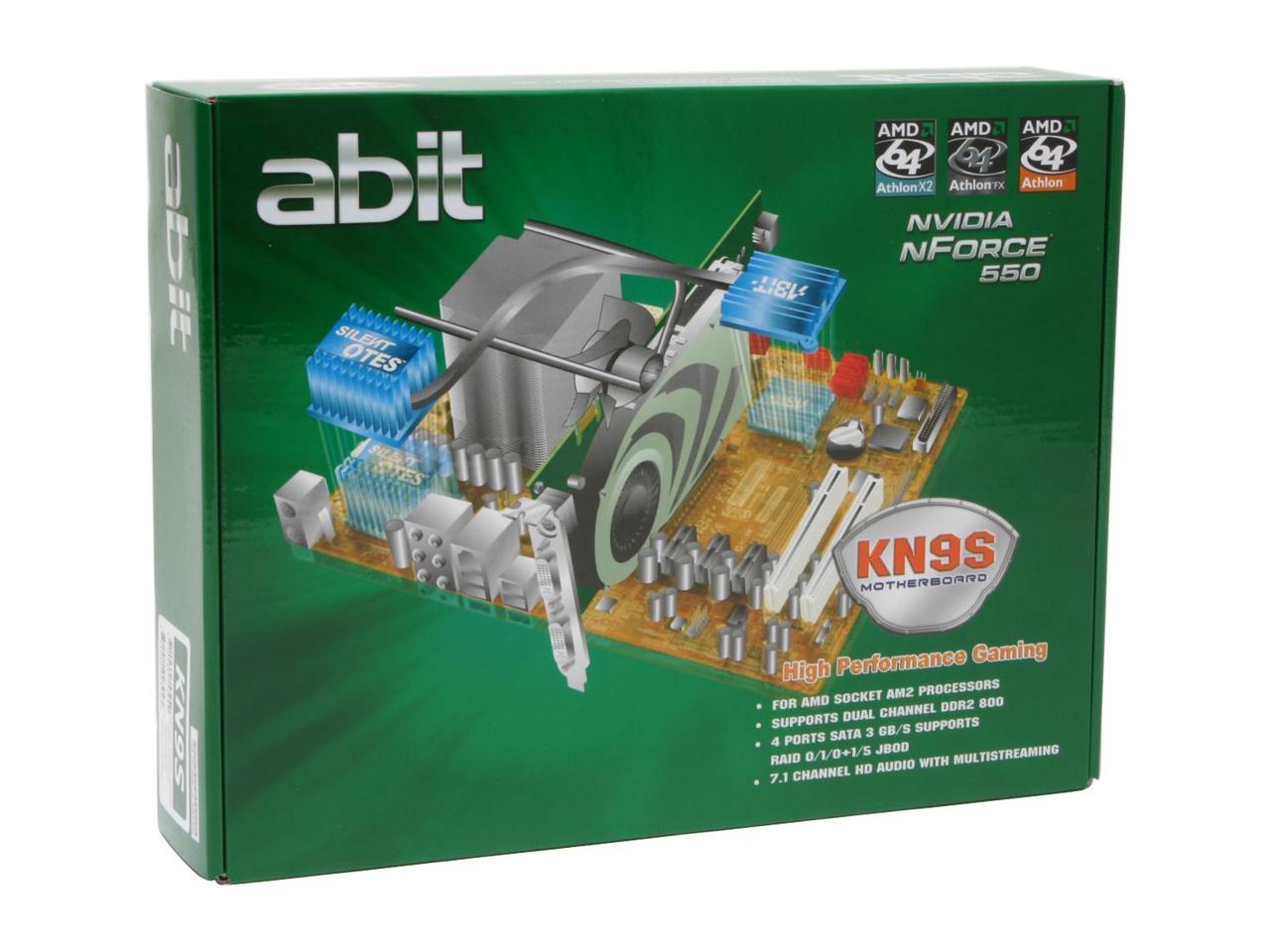 (37) Write a Review
OUT OF STOCK.
Overview
Specs
Reviews
A full featured motherboard with plenty of power, the Abit KN9S is great motherboard for anyone needing to replace or upgrade their system. Equipped with an AMD socket AM2, suitable for Athlon 64 processors, including the X2 and FX series, the KN9S is more than capable of handling anything you may want to run. Using the Nvidia nForce 550 chipset the KN9S supports up to 8GB of DDR2 memory for supreme power. It also includes a gigabit Ethernet port, 7.1 channel onboard sound, and 4 SATA ports.
Thanks to those 4 ports, you can add multiple hard drives to the system, and the KN9S supports RAID 0, 1, 0+1, 5, and JBOD. For your expansion needs the KN9S has multiple expansion slots to use including one x16, and three x1 PCIe slots, plus an additional 2 PCI slots. Build a powerful system; the Abit KN9S is a solid foundation.

Pros: Excellent and pleasing to navigate full featured bios.highly stable and responsive in the hands of a compitent builder.

Cons: newbie builders posing as hardware enthusiasts bashing this board in thier reviews because of what is clearly user errors.but then again that probably drove the boards price down making it a steal for someone compitent enough to use it,so maybe thats more of a pro than a con eh?

Overall Review: board gave no arguements towards a 65w 1.25v am2 x2 even with out of box bios(which is 1.3 btw).i have to say it makes me sick to read of people that would rather rma a motherboard and call it broke rather than at the most flashing the bios or setting the correct voltage for the ddr2 memory. if your ddr2 is default outside of 1.8v you need to set it to the correct value because no board will do it for you unless the board defaults at an incorrect jedec voltage value.because the truth is, this board is just awesome, and i even left my x-fi out of this build because i tried the onboard HD audio with the latest hd audio driver from realteks site, and was strangely impressed by it so i kept it.so if your looking for a non sli nforce5 for your 8800 and your am2 try this one out, itll give back more than you put into it for sure.

Pros: The cost of this mobo is great only $xx! And no it is not junk, don't listen to those other people who have written bad reviews. They don't know what they are talking about. First of all this motherboard is a single gfx card solution, which meens it only has one pci-ex 16x slot. The extra power connector that is not on this mobo is normal. Only dualcard mobos have this connector. Yes, it does have a spot in which it can be place along with other components. This is normal don't freak. Abit used one mobo layout for all their mobos in this series. They just remove features that aren't used and replace the chipsets. Also yes the manual does show everything that appears to be missing on this motherboard but thats because the manual is for all the mobos in this series. MCP,SLI,ULTRA,ETC...Cpu problems could be related to missing drivers(especially with dual core cpus). Dualcore cpus need drivers and optimizers to perform correctly. You can download them off of AMD's site for free.

Cons: None. If you are a budget builder get this!

Overall Review: I am still running bios v1.0. Mainly because I haven't had any problems and I don't have any cds. Cds? Yes you can use cd or any readable device to update bios'. If you have problems with abit flash utility o well. Never use any companys o/s(example: windows) flash utility. DANGEROUS.

Overall Review: Ive built 20+ gaming computers, and I'm very impressed with the performance of this AM2 system so far. I dont OC so I cant rate it for that. BIOS is simple and easy to naviage.

Pros: nice placement of PCI-E, good chipset passive cooling, drivers are stable from nVidia, its just a great board i cant see why anyone could give it less than 5 eggs

Cons: i think the layout of things is almost perfect for my mid-tower case, wish it had just ONE more PCI slot and IDE port instead of the PCI-e x1 ports (just added a PCI IDE controller)

Overall Review: the way this board is, you cant go wrong. it could be better, but for what it is it's almost perfect and deserves no less than a 5/5. are there really any PCI-e x1 devices yet that manufacturers need to include 3 of them on here?

Pros: Newegg took it back and refunded my money! Thank you!

Cons: This MB would POST 25% of the time. I flashed the BIOS and it would stay running for 3-4 mins then reboot. I talked to ABIT and they told me to get BIOS 1.6. 1.6 was made especially for the x2 3800+ proc and it still would never get thru the installation of XP.

Overall Review: a doorstop would work better. Replaced this with a ASUS M3N and all my other new parts, 1 hour up and running. Runs great...now!

Pros: This is only the second computer I've built, and this mobo isn't as difficult as others have said. The manual was decent and the board itself is laid out well. Plugging everything in was a snap. Has the slots & chipsets I wanted for a budget box -- esp lots of SATA slots. Nice passive cooling on the north bridge.

Cons: You must flash the BIOS for things to work right. Also, it set my DDR2 voltage to 1.8 volts rather than the 1.9 volts listed on the memory's specs, so I had to to raise it by hand in the Setup pages. Once I did this, all memory tests passed. I wonder if this was what caused some other reviewers' instability?

Overall Review: As of January 4, abit-usa.com's ftp site has BIOS version 1.7 available, but their web site still links to 1.6. Both of them fix the 1.5 typo mentioned in September.

Pros: Good BIOS program. Very good price for what you get.

Cons: The CMOS jumper is in a very bad position. The BIOS update is pretty much mandatory, else you are wasting hardware performance. I wouldn't mind this so much if their site provided a working version of the BIOS updater. I literally had to edit their program to make it work. The nVidia firewall is pretty bad, and has known issues with several different applications.

Overall Review: After flashing/updating the BIOS, and getting rid of the nvidia firewall, I've had no problems with this mobo.

Overall Review: You'll need to flash the BIOS. Make sure you have a floppy on hand.