OUT OF STOCK
Sold by: Newegg
Shipped by Newegg
Price Alert
Add To Wish ListFound on 14 wish lists 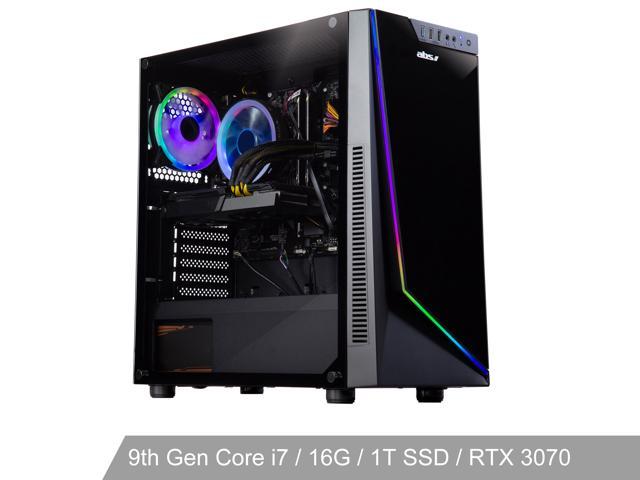 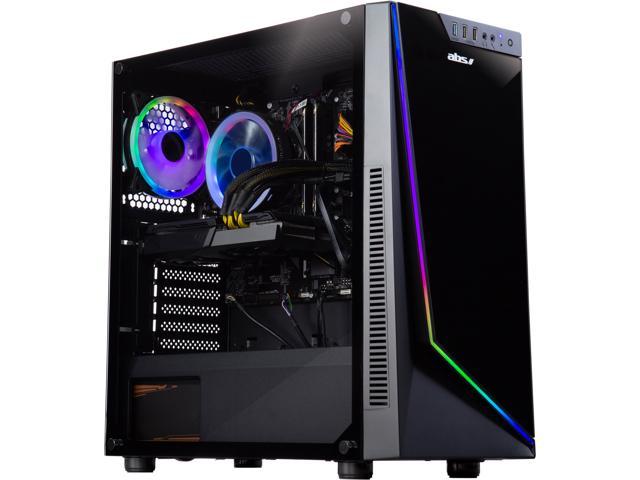 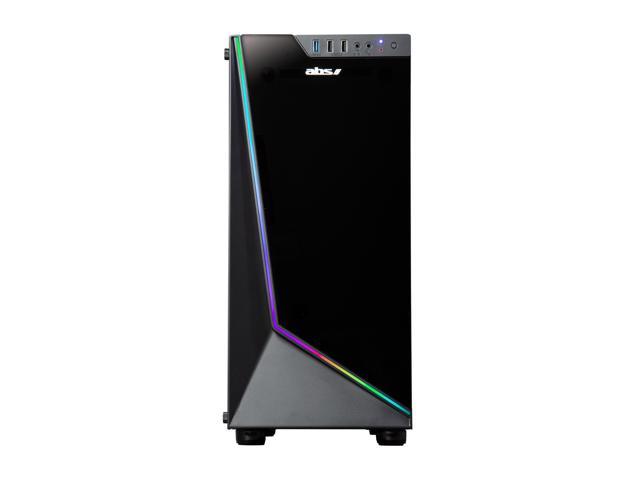 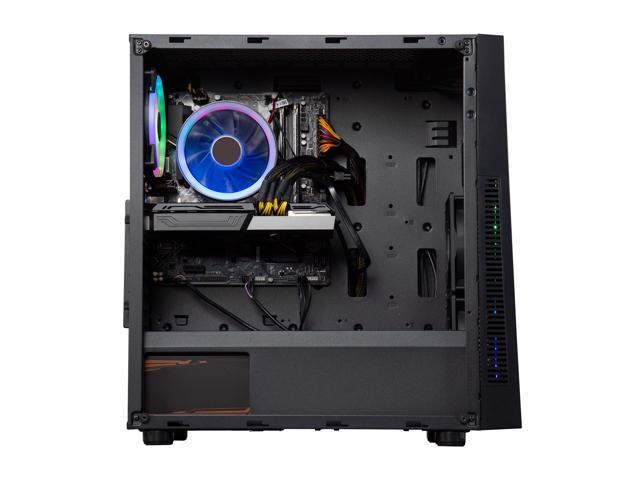 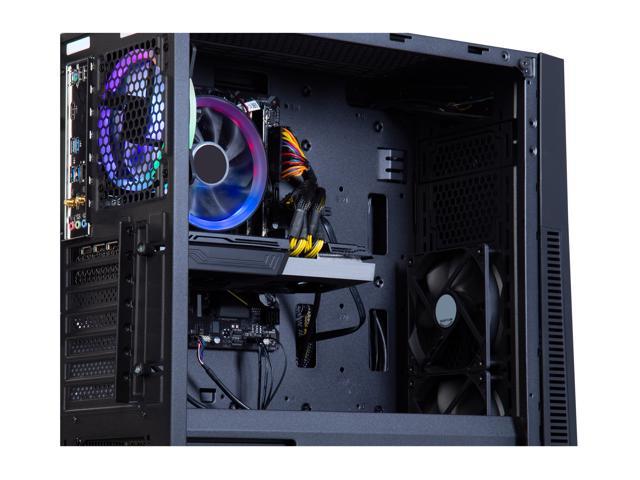 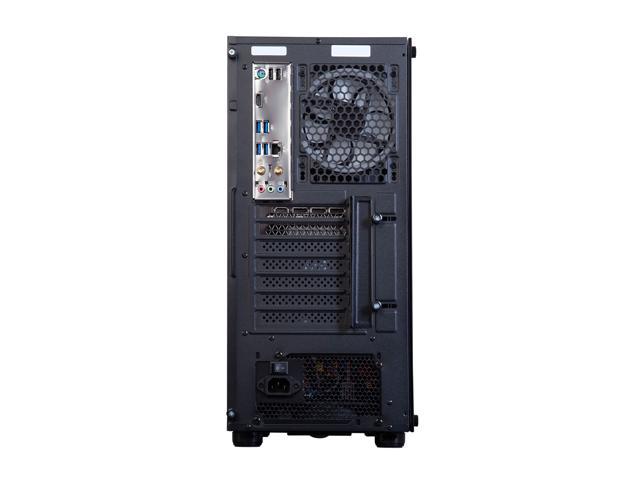 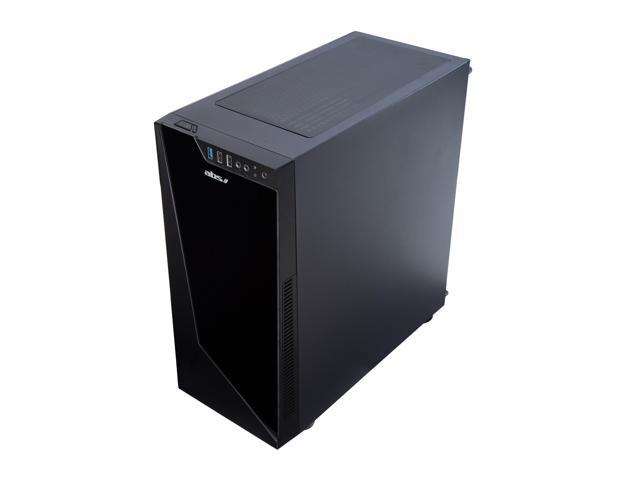 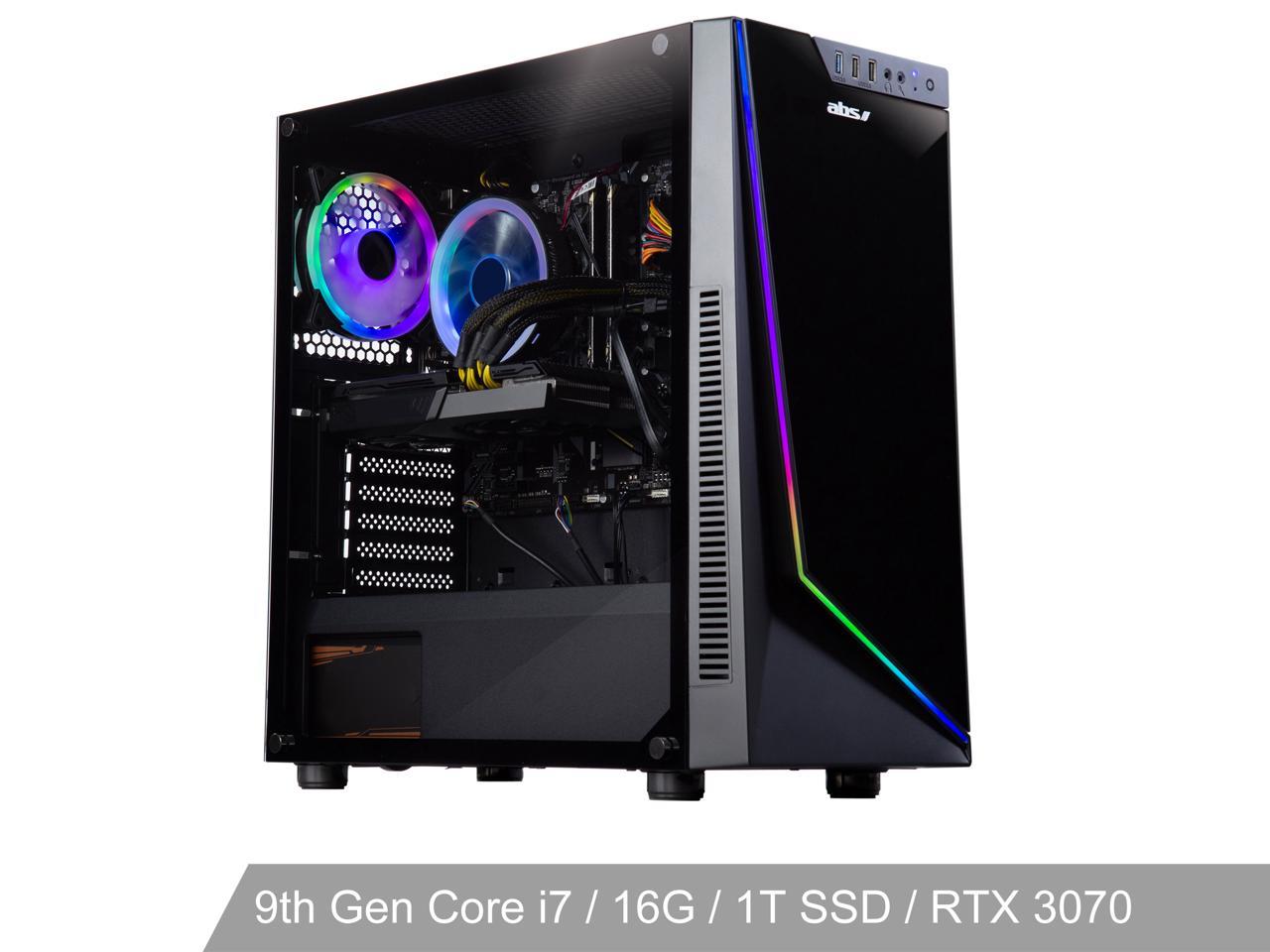 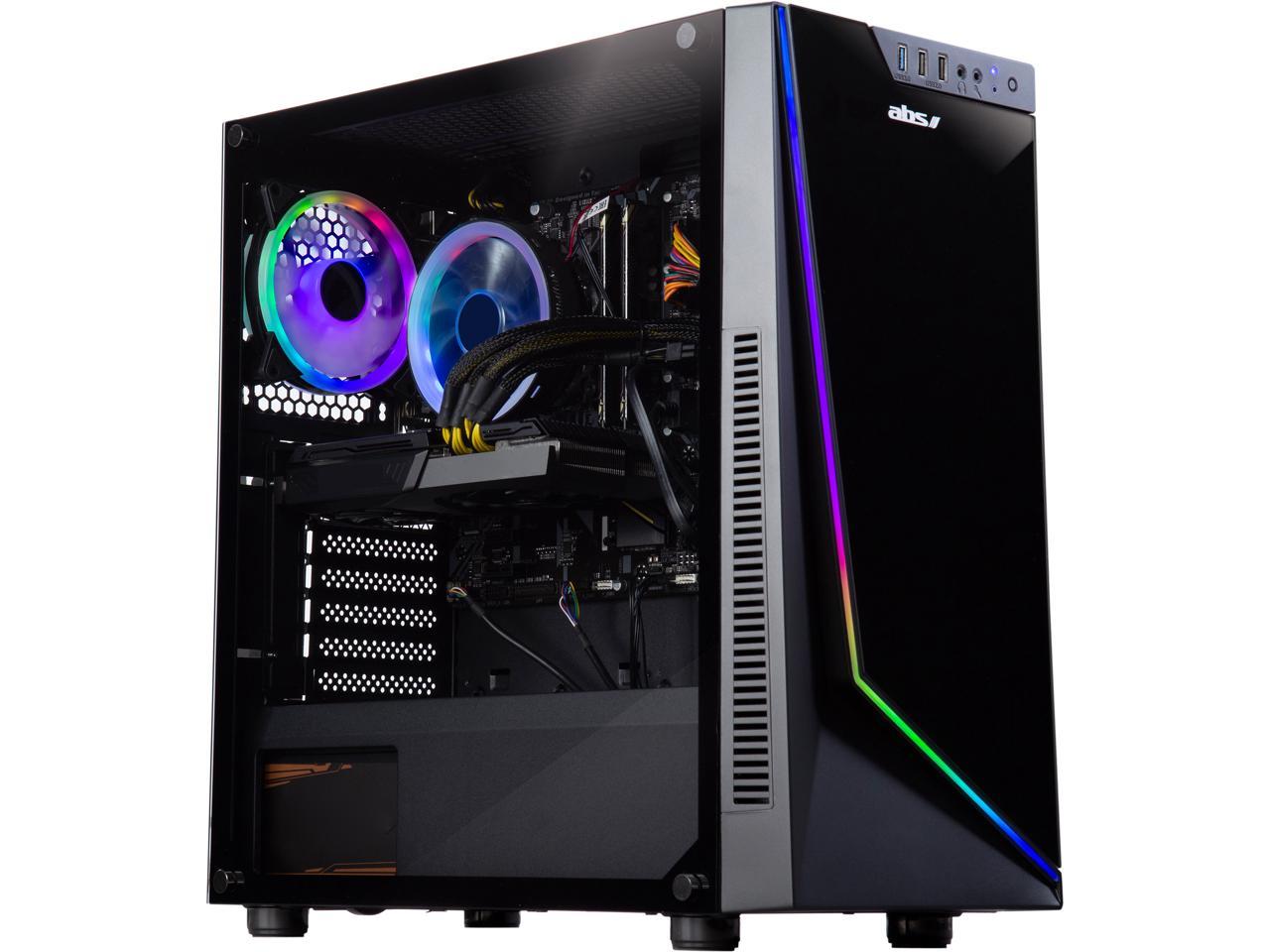 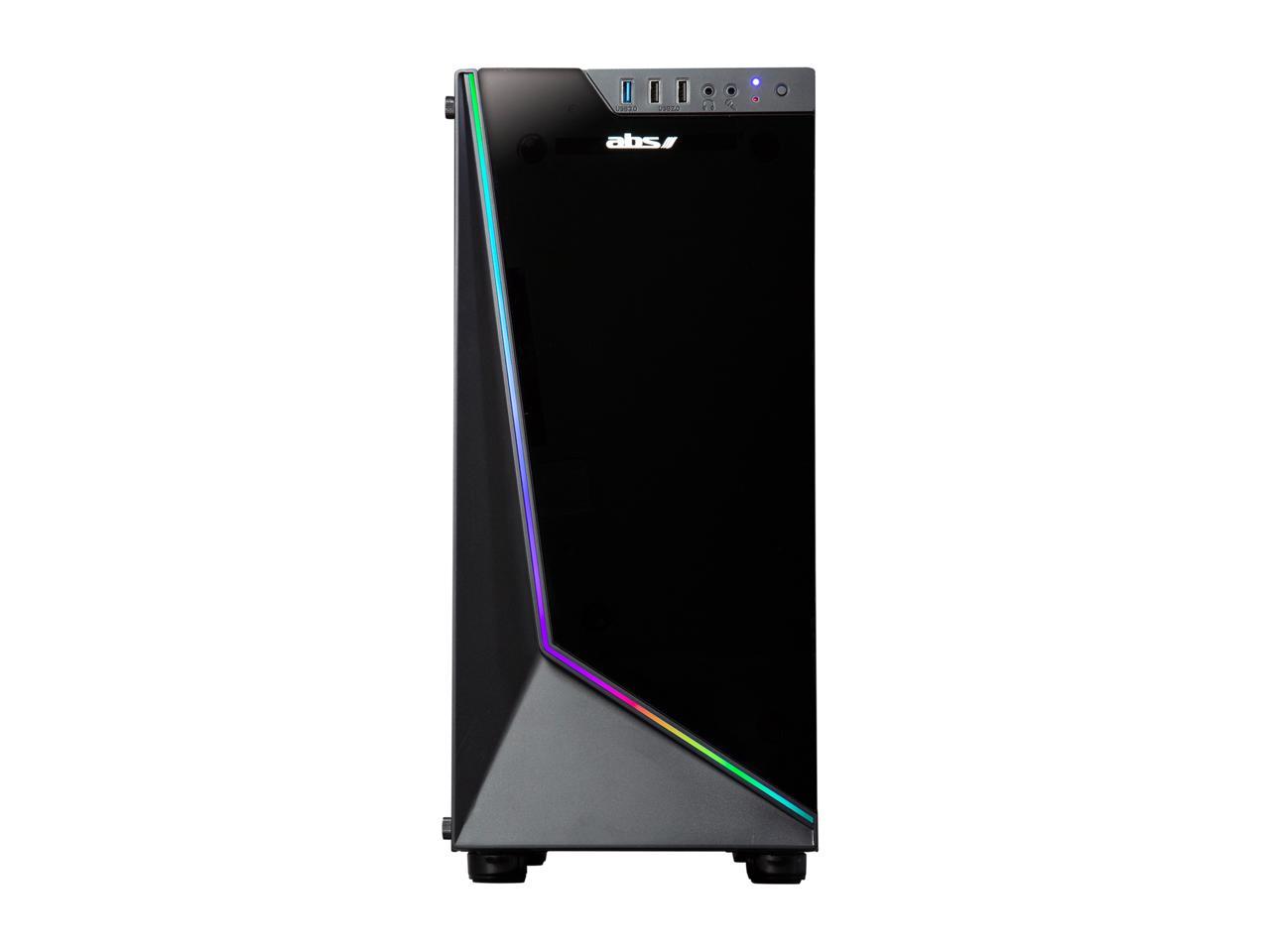 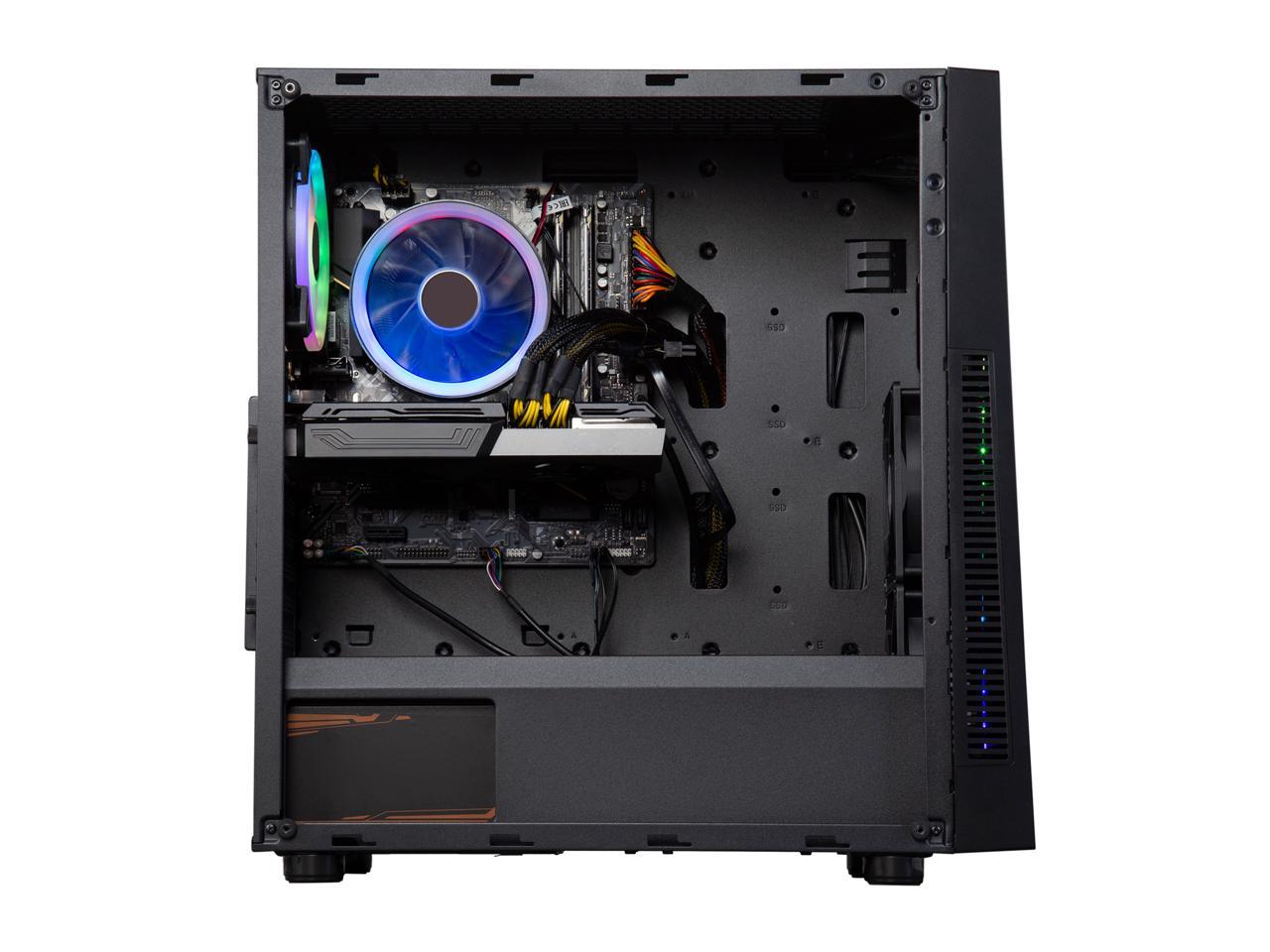 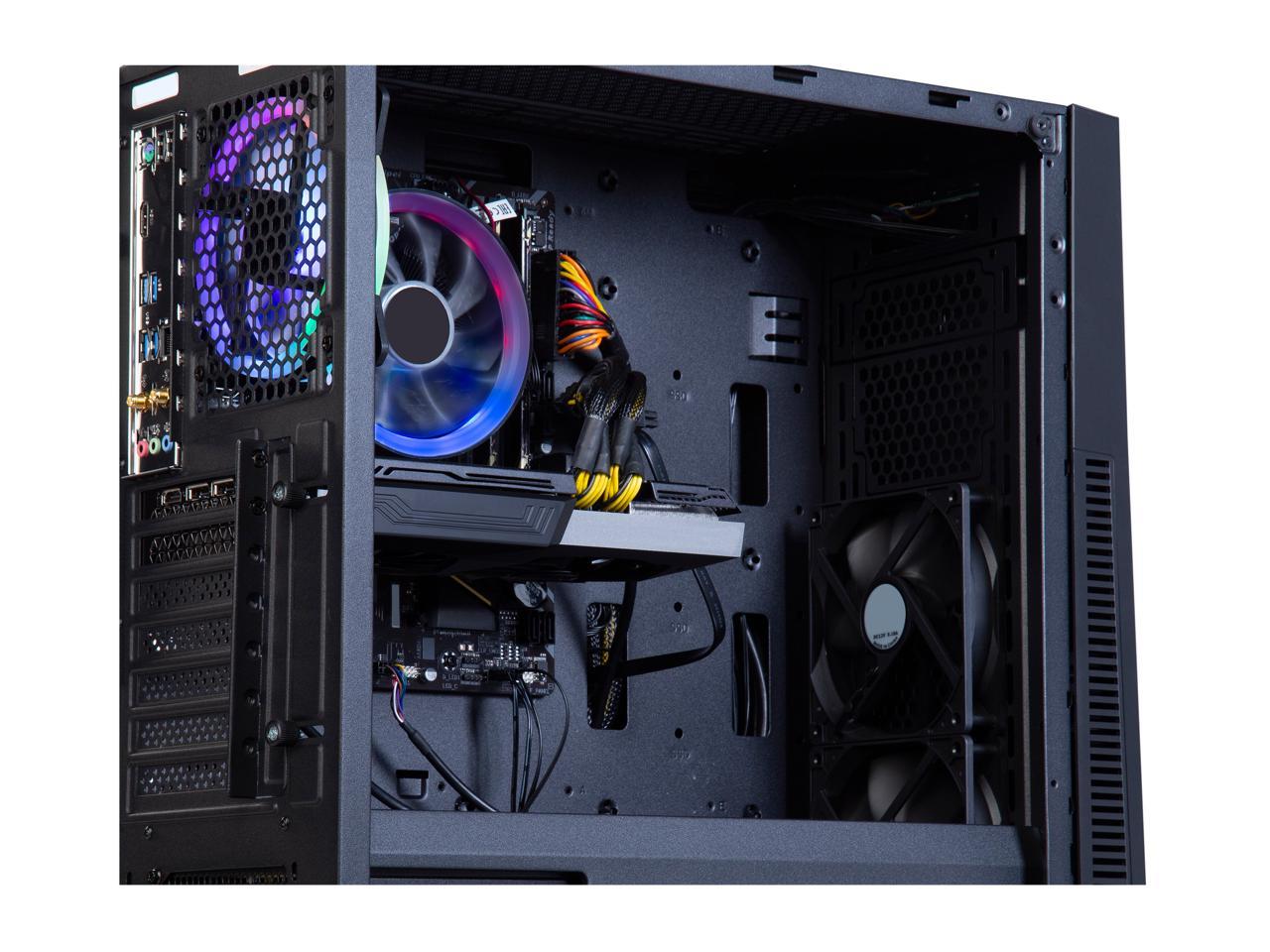 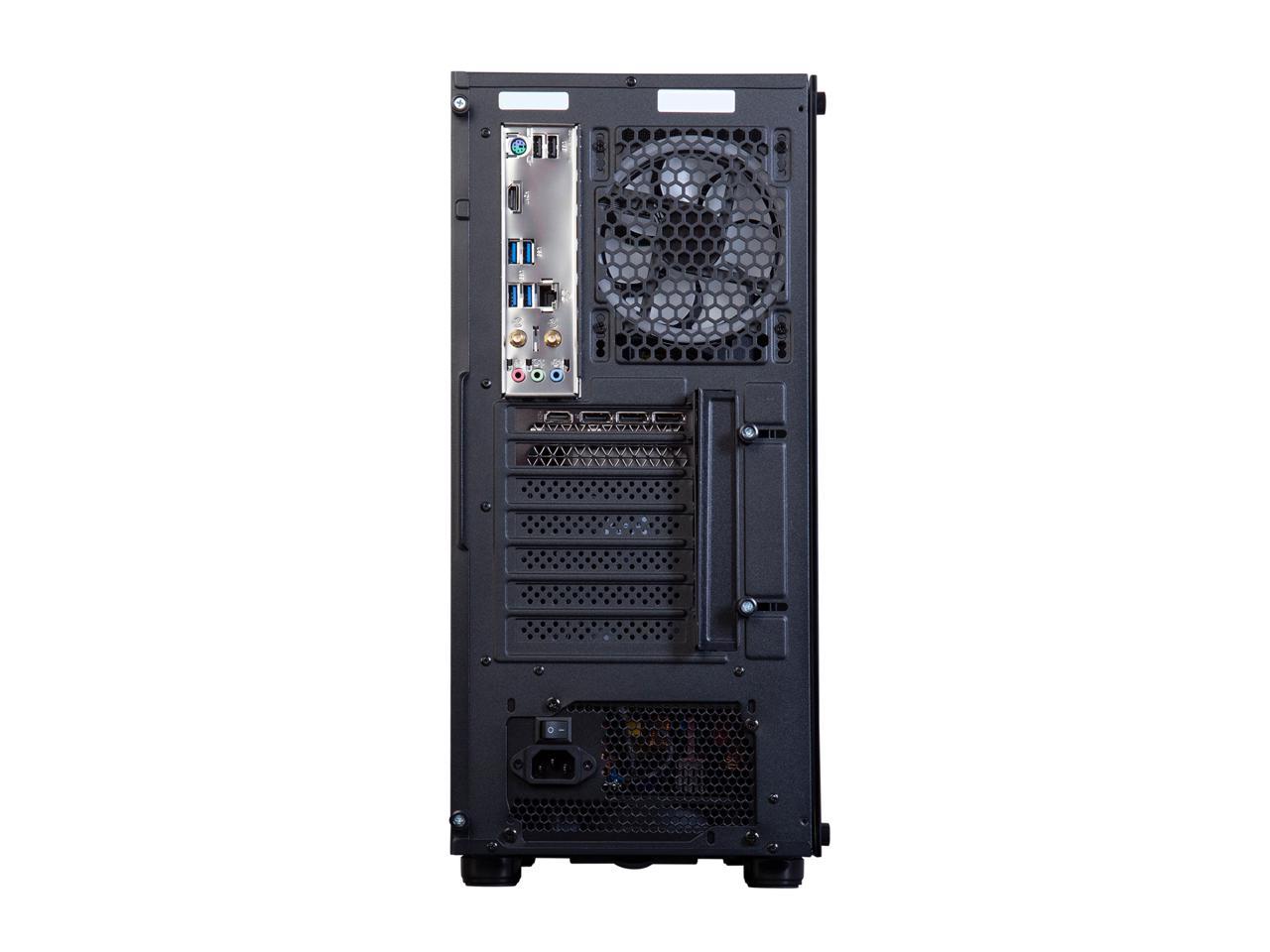 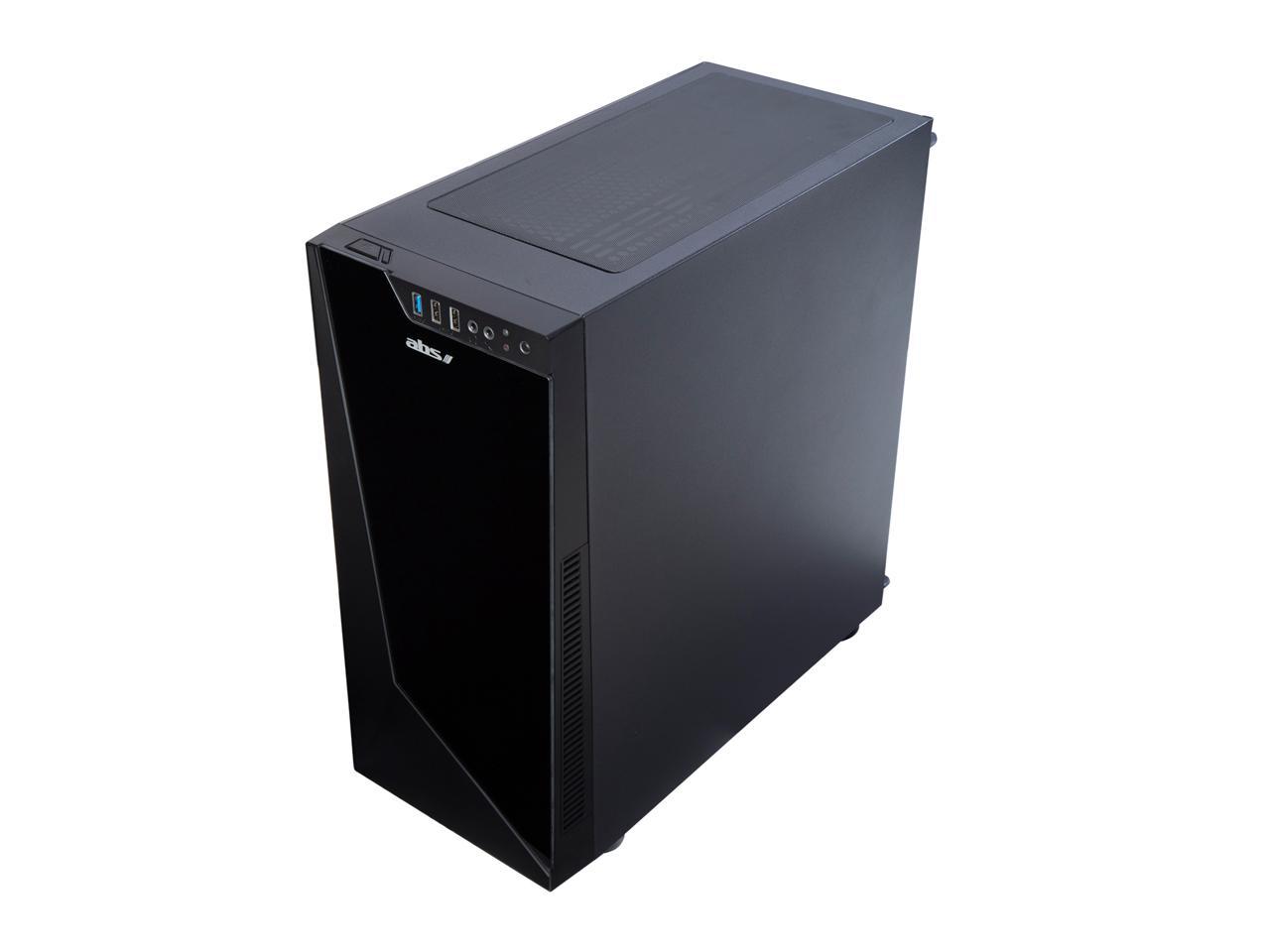 When it comes to gaming, entertainment and creation, the ABS Gladiator Gaming PC will never disappoint with quality components and impressive cooling. It is clean on the inside and elegant on the outside. When powered on, the gaming PC adds an ARGB lighting charm to the inside and out.

The desktop PC offers real muscles with quality components. It will respond fast whether it is gaming, streaming or creation.

The geometric front ARGB strip and inside two ARGB fans together offer an eye-appealing fun.

All cables are channeled and routed to ensure a tidy and clean look.

At the top of the front panel is an I/O panel which includes one USB 3.0 port, two USB 2.0 ports and audio in/out jacks.

Learn more about the ABS ALI462

Pros: - Runs great - saved me the hassle of putting it together - shipped securely and quickly - did not have to wait for 3070s to be in stock - name-brand 3070 partner card

Cons: - A little disappointing that some of the components listed don't include details so you don't know what you will get (probably because they are assembled to order with whatever Newegg has in stock at the time). - a bit strange to advertise 3k mhz RAM when the included motherboard (B365M) and CPU don't support it - even if I wanted to upgrade the processor to one that did, I would have to replace the whole motherboard too. - Benchmark software suggests the CPU is not performing to spec - may require some troubleshooting.

Overall Review: - It's a good deal for the price and runs the games that I want to play at 1440p max settings quite well, and was much more convenient than waiting for 3070 stock. - the 3000 mhz RAM isn't supported by the included motherboard. - If you are able to build your own and comfortable waiting for GPU stock, then do that. I wasn't, and this is a great deal if you're not.

Overall Review: This thing runs amazing, obviously love the 3070, great cord management, nice to look at, if you get it you’ll love it, just be sure to check your connections. The ram wasn’t fully seated so pc wouldn’t boot originally, once that was corrected I have 0 complaints.

Pros: Seems to be built well. The case and cord management on the inside are top-notch.

Overall Review: I've built several PCs of my own, but this time around I decided to trust a third party to do it. ABS does a great job and saved me a lot of hassle. I'd recommend this to friends. My only real complaint is that these days 1TB fills up pretty fast on a gaming PC.

Cons: - Takes up quite a bit of space - The back plate that the motherboard is connected to was put on slightly off center so most of the ports are inaccessible unless I redo it. - Loud. After trying different locations with good airflow and messing with fan speeds, the fans are always running unless I turn the threshold up quite a bit. CPU stays around 40-45 C while idle. - Lights. The face and fans light up but the only control is a button by the main power. It comes with RGBfusion which is supposed to control the motherboard lights but it doesn’t have any so it’s pointless and the CPU fan stays lit up with no control unless I’m missing something but it doesn’t show up in RGBfusion.

Overall Review: Overall I’d definitely recommend it for someone like myself that just wants a good computer and doesn’t care about the lights or whatever. It’s fast and powerful. Delivered way faster than projected.

Cons: Haven't invested a ton of time into it but can't figure out how to easily turn off the case lights.

Overall Review: Reasonably priced rig and one of the few ways to get a 3070 these days.

Pros: - Great looking, fast, high performing PC that plays most modern games at Ultra graphics and 4K or 1440 with 60 fps (except Cyberpunk which no one can run at full 4k/Ultra/60 right now) - The RTX 3070 is great, I received a Zotac one which is a quality brand and this is pretty much the only way to get this GPU right now. - Excellent quality pre-build ready to boot right out of the box (but check all the connections first)

Cons: - Runs hot, the included CPU cooler is fairly cheap and doesn't give you much more than stock cooler performance. I was getting close to 100°C on the CPU on a couple games so I'm considering upgrading the CPU cooler and adding a couple top case fans. But then again most people buy pre-builds so they don't have to mess with the inside of the PC. - The case seems to not have the best airflow and no dust filter on the front fans, so be prepared to have to clean dust from them. - Can't overclock due to the locked CPU but this isn't a big deal for most people who don't OC, myself included. - Cable management was decent but could be done a little better

Overall Review: If you're looking for a quality pre-build to get an RTX 3070 at a decent price I would recommend this PC. This is my second ABS pre-build that I've purchased from Newegg, and I plan to again in the future.

Overall Review: worked great until it wouldnt post after one day i hadn't even opened the case wasnt showing any display everything turned on all connections were secure ive almost given up on it

Pros: - PC comes with a 3070 which is almost always out of stock - Prebuilt - ABS support is excellent and kind.

Cons: - My PC came broken out of the box. I had to contact support as it wouldn't even turn on, turns out the motherboard was fried + the GPU latch was literally gone so the GPU couldn't even sit properly in the motherboard. ABS sent me a new motherboard, but I had to do the motherboard swap myself and hook everything back up. If I wanted to hook up a PC, I would have just bought the parts instead of paying extra for a pre-built. - RAM speed on the motherboard is capped at 2666 or 2600 (can't remember), so you won't get the full potential of the RAM in this motherboard. - The i7-9700f isn't bad at all, and performs very similarly to the i7-9700k, but it's weird that they put in the 9700f instead of the 9700k as it's BARELY more expensive. - Motherboard is really cheap. I know I already mentioned how mine came broken, but this thing isn't top notch or really anything to write home about, they really cheaped out on this component. - The RGB on the CPU fan isn't connected to the RGB on the other fans, meaning you have to control them separately, in fact, you can't control the RGB on the CPU fan AT ALL. There's no way to turn it off other than trying to figure out how to disconnect it on the motherboard level which I'm too lazy to try and figure out. The software that comes with the PC to control any of the RGB fans doesn't work at all either.

Overall Review: Overall the PC isn't a terrible purchase, but I'd highly recommend buying from ABS themselves as opposed to newegg as I feel you'll be less likely to run into the terrible situation that happened with me. I saw others saying "oh my RAM wasn't all the way in" or "I had to reconnect a loose cable", but none of that compares to having to get a new motherboard day 1 and do all the replacing and hooking up yourself. ABS has given me a warranty of 1 year as Newegg's is only 30 days, so that's nice, but I really think you should buy from ABS themselves if you want a pre-built as it'll likely be cheaper/you'll have less of a chance of your PC breaking during shipping.