OUT OF STOCK
Sold by: Newegg
Shipped by Newegg
Price Alert
Add To Wish ListFound on 2 wish lists 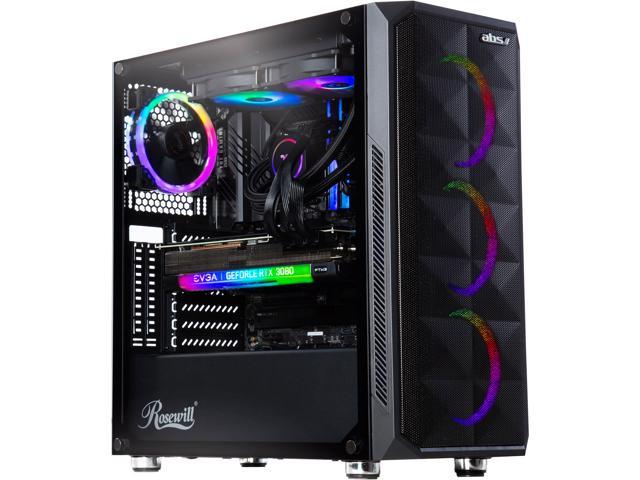 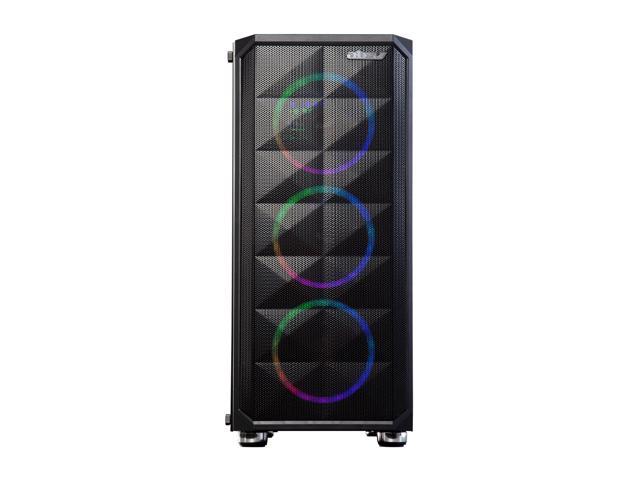 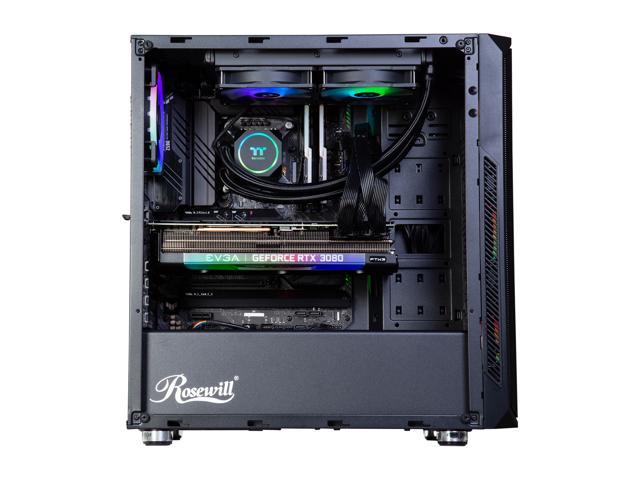 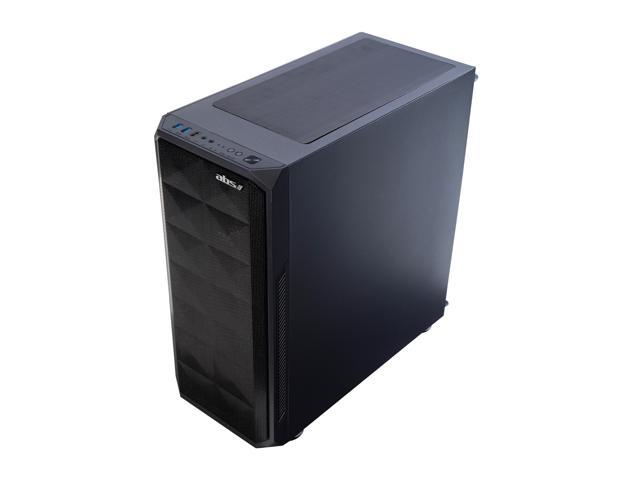 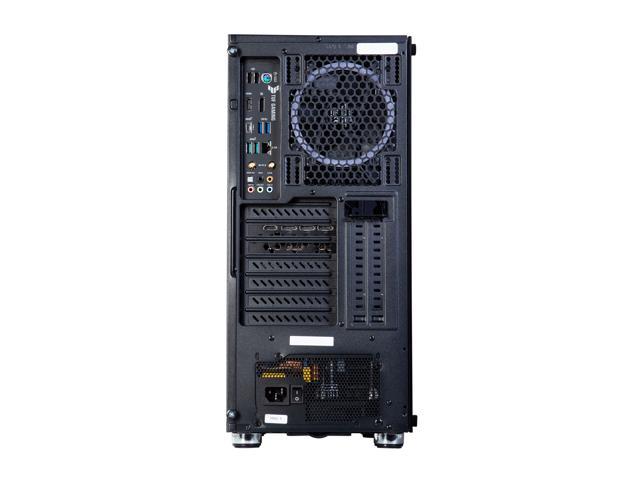 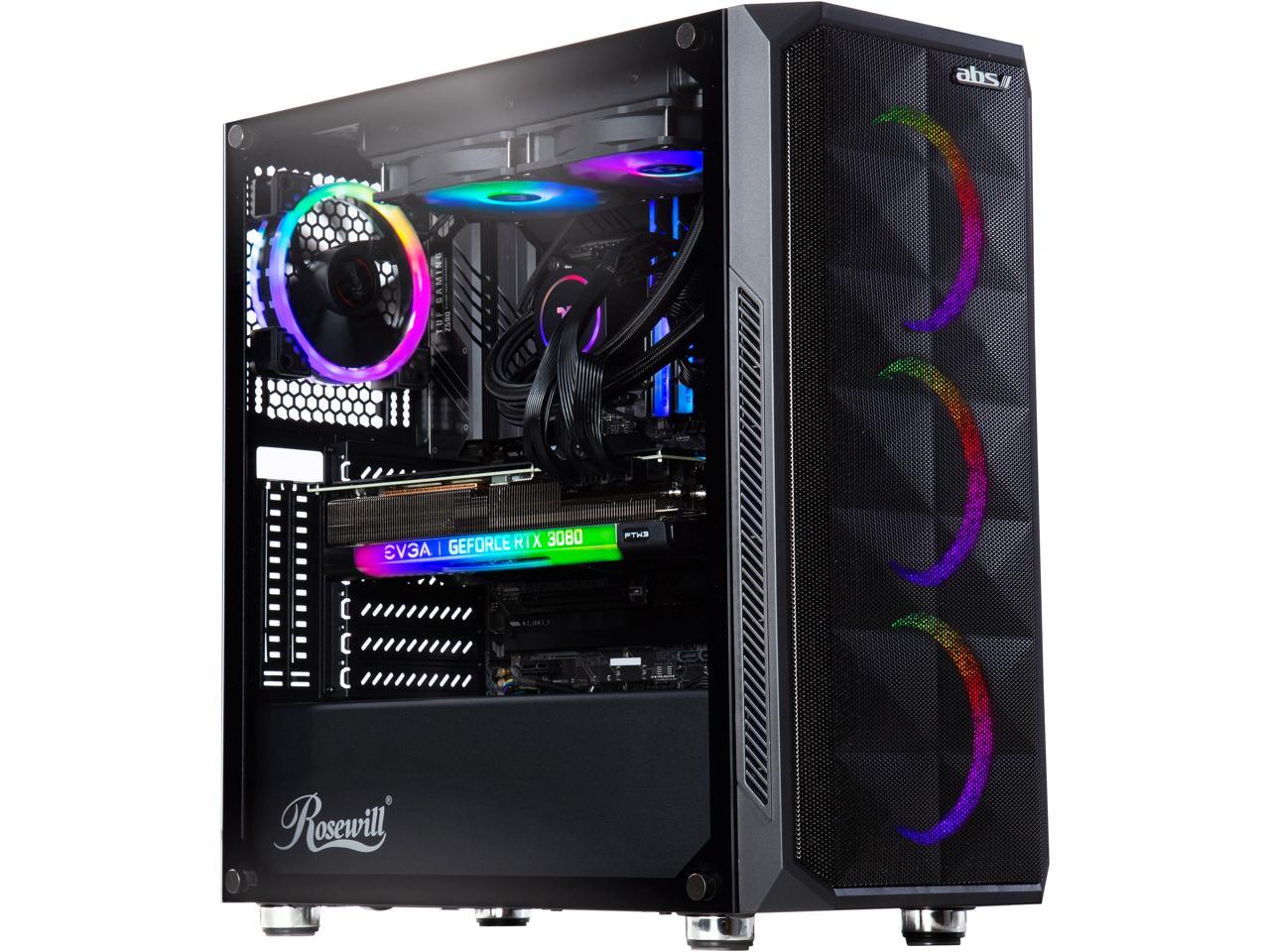 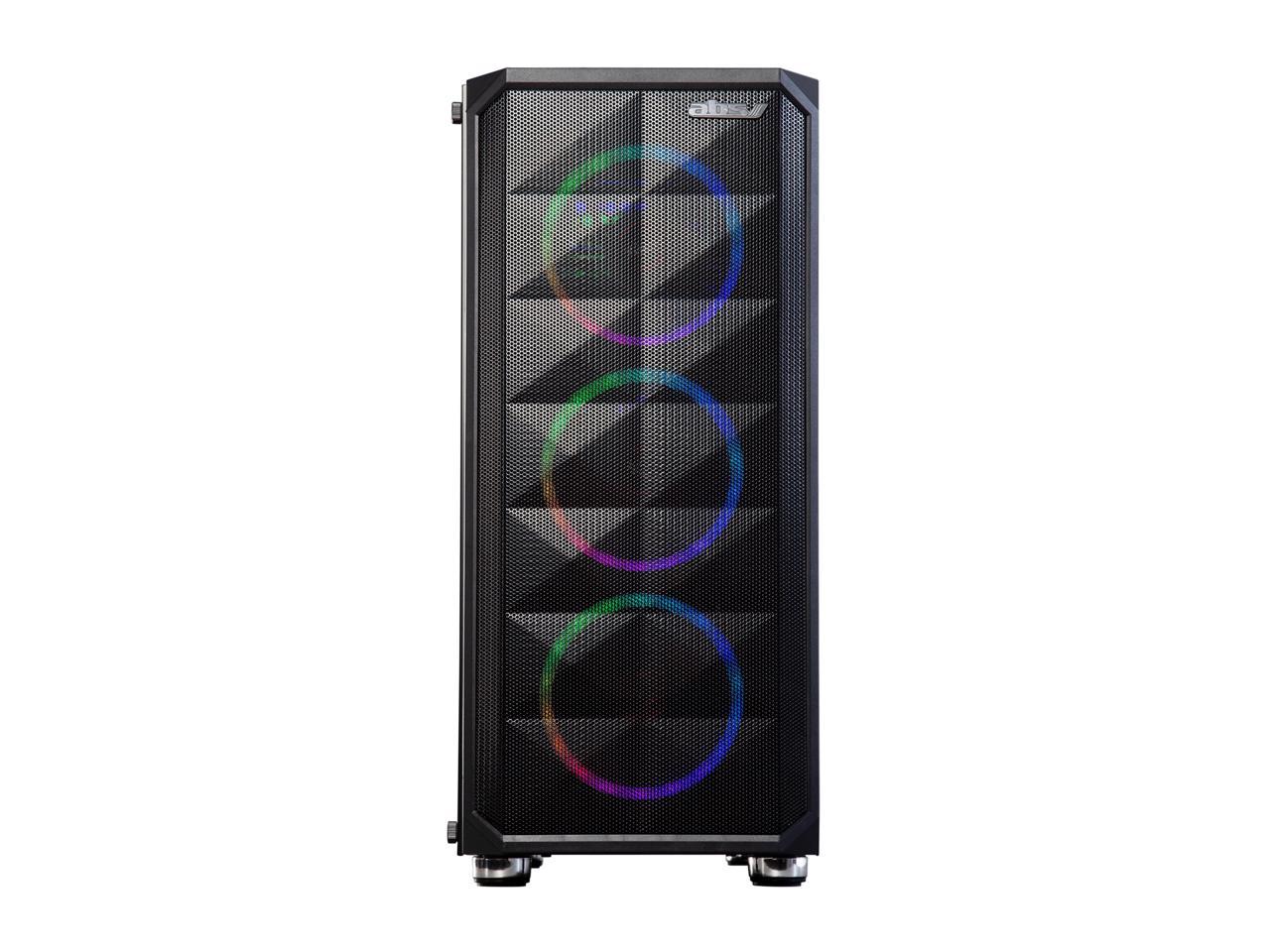 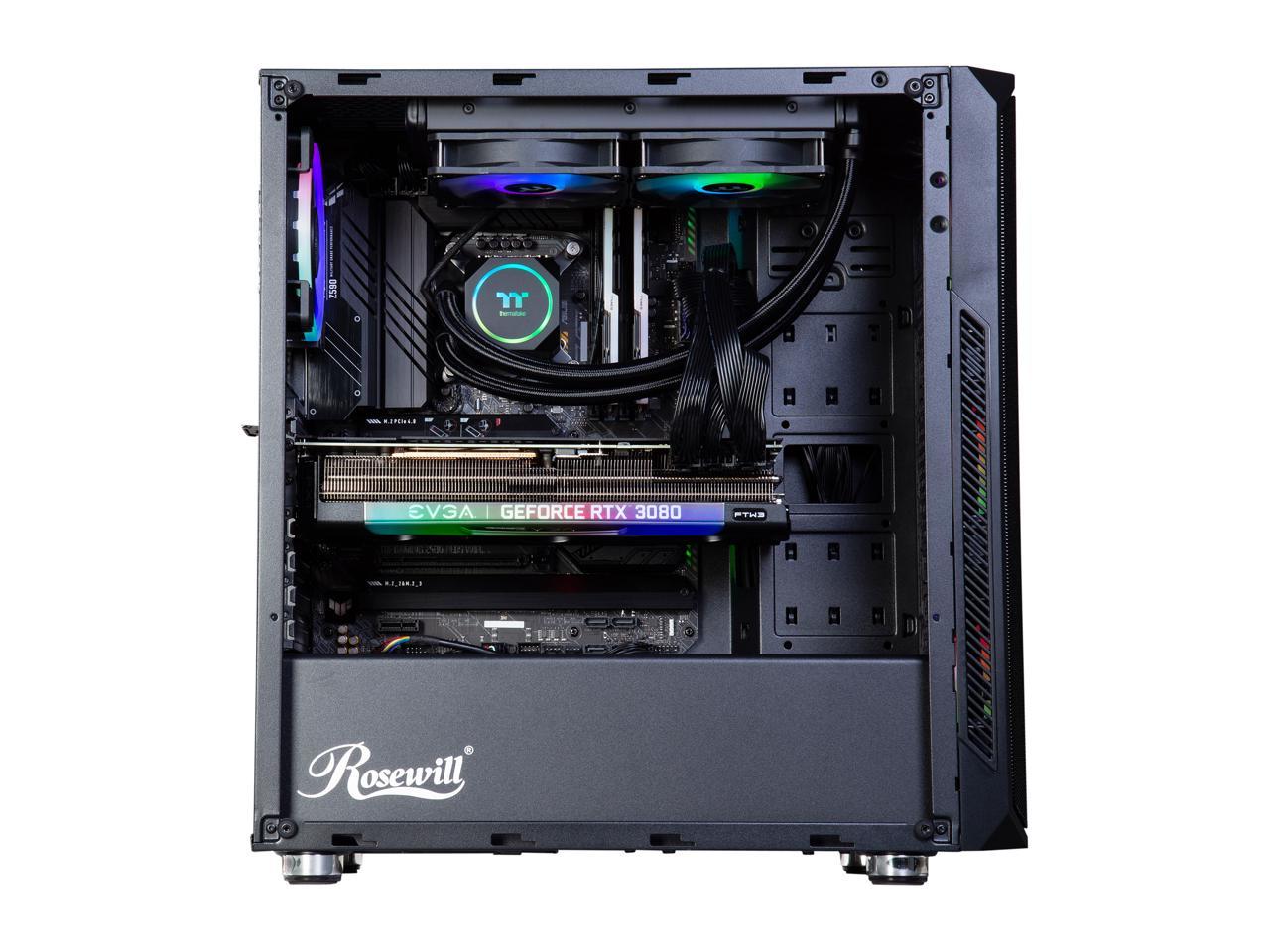 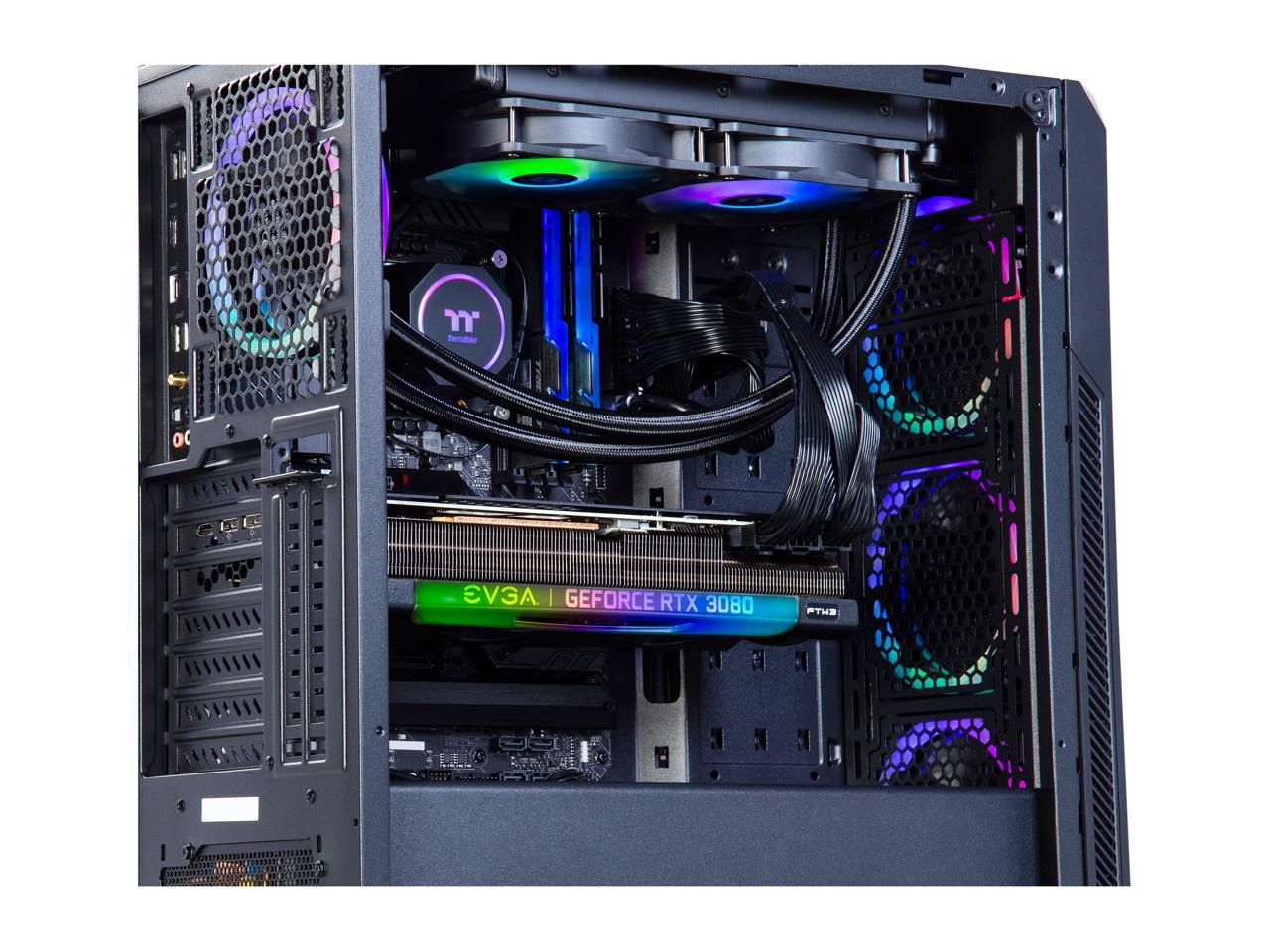 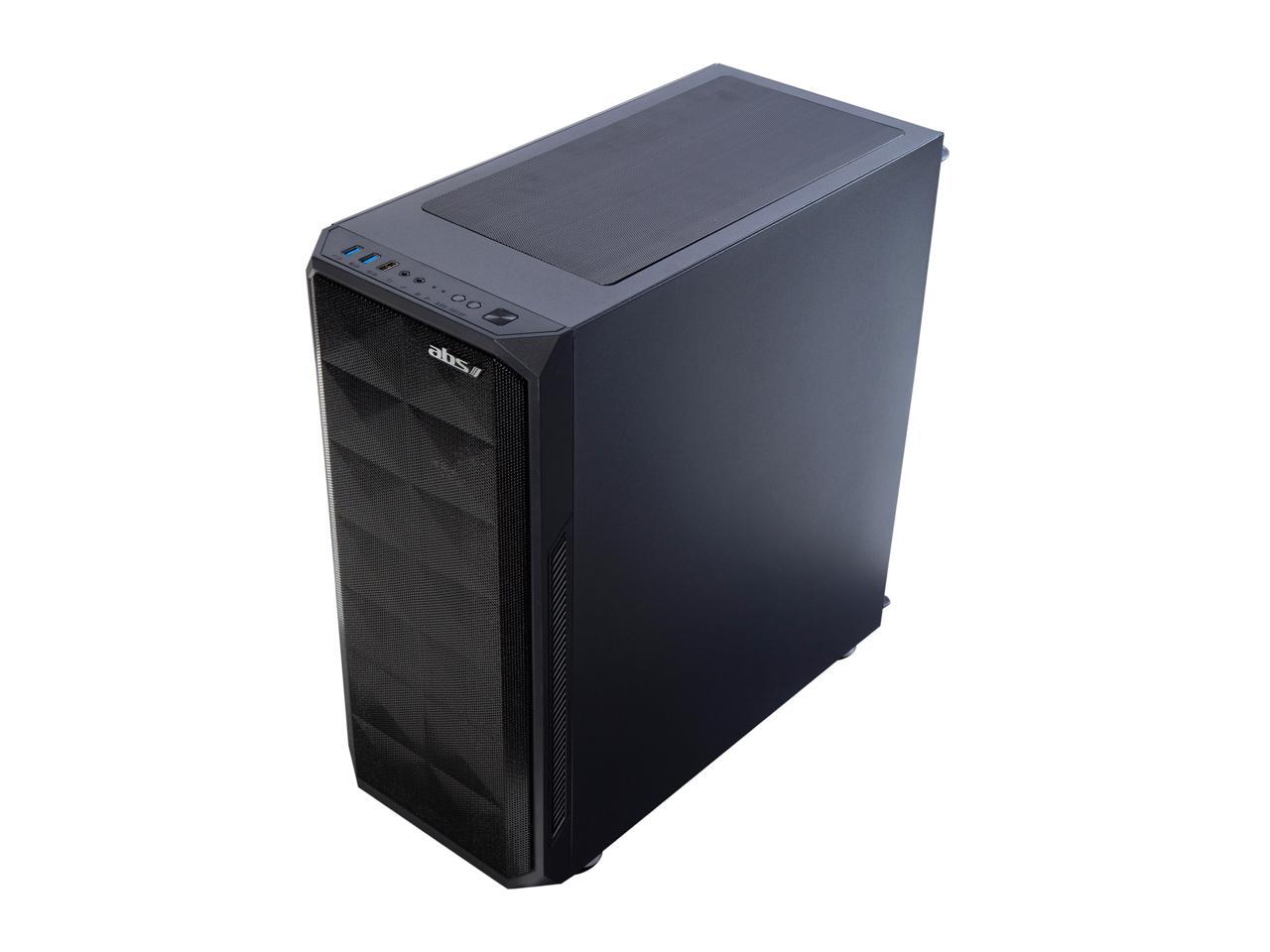 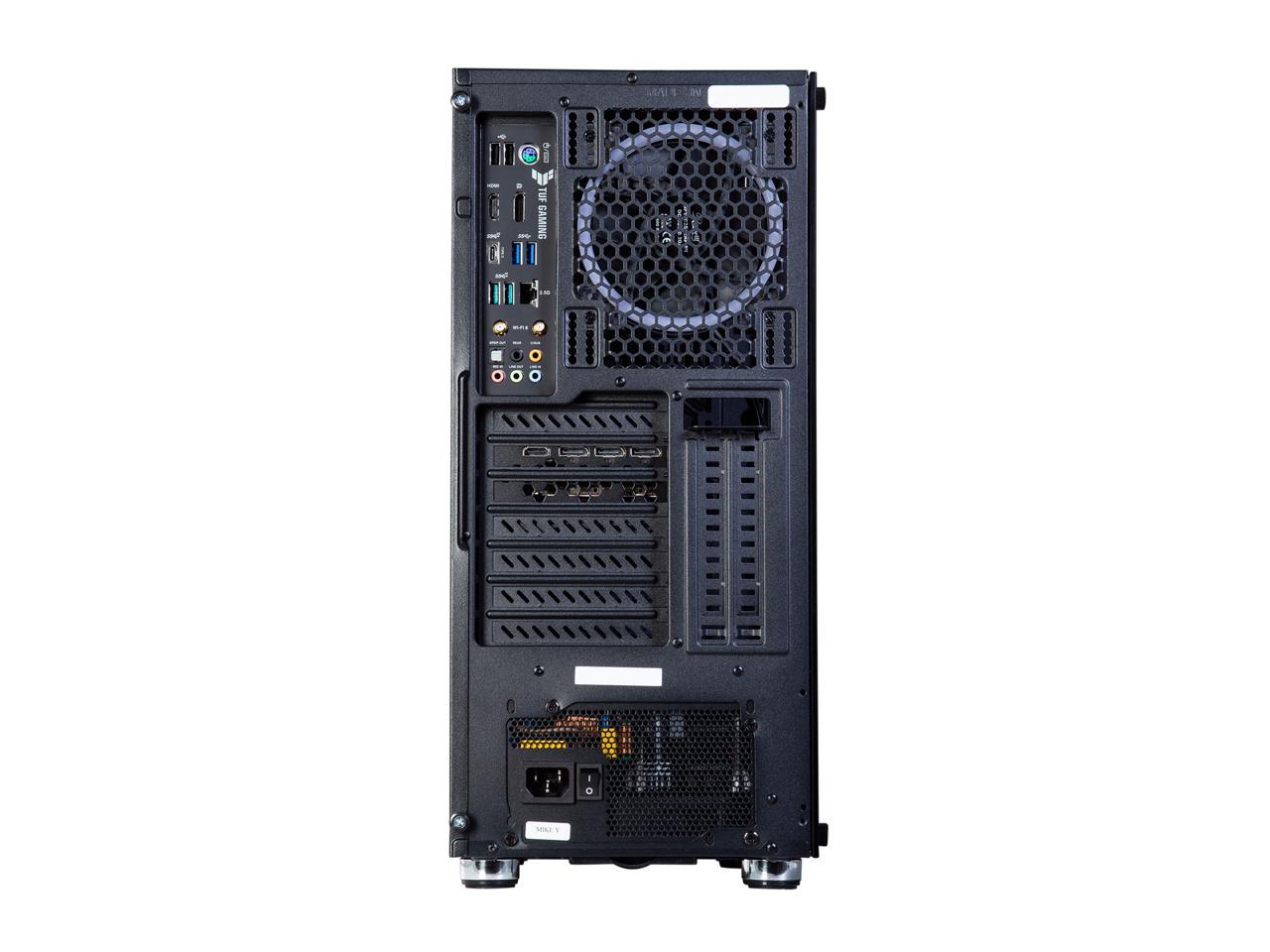 Learn more about the ABS ALI485

Pros: - Near-flagship CPU that is unlikely to create any bottlenecks for gaming. - Up-to-date and likely solid motherboard (will support PCIe 4.0 on M.2 for NVMe Gen4 SSDs with upgrade to next-gen CPU, has Intel 2.5G LAN chipset and Wifi 6). - 32 GB RAM also pretty futureproof. - Highly desirable GPU, from a top brand with good air cooling and good overclock (and aRGB). - Case seems to have good airflow, temps are great and it's quieter than I expected both idle and under load. - Case looks a bit better to me in person than in the photos (didn't like it at first but it's grown on me). - Good build quality and cable management. - Performance - maxes out pretty much any game I have at 4K60 (although it makes me wish I had a VRR/G-Sync display for those edge cases), non-gaming tasks feel the quickest I've experienced on a Windows 10 PC, feels like a noticeable step up from a high-budget gaming PC from a few years ago. - Perfectly stable so far, no crashes or errors, no issues with any games I've tried (I'm judging this based on usage AFTER swapping the PSU [see below]).

Cons: - Power supply it came with (which matched the listing photo) was the Gigabyte P750GM. This model has a 2-egg rating with over 250 reviews as of this time, and is also for sale here as open-box. A quick web search for 'P750GM review' brings up a review where this model PSU not only performed poorly but actually failed their overpower protection test and exploded. Customer reviews didn't seem any better. The latest PSU tier list on LTT (taken with a grain of salt) has this model listed as 'Tier E', "Potentially dangerous in multiple scenarios". - Windows did not come activated (resolved [see below]). - Tricky to get RGB controls working for motherboard, AIO cooler and RAM (case fan RGB is controlled by a top-panel button). - Corner of the metal side panel is slightly dented with bare metal exposed (minor).

Overall Review: Even with the difficulty getting this video card (with or without a pre-built PC around it), this isn't a bang-for-buck pick. It gets even worse if have to account for the 'potentially dangerous' power supply it shipped with. But I gave in, and when it arrived 4 days later I had a brand-new Corsair RM850x ready and waiting. It was well-packaged, but I did find damage to the metal side panel as if it were dropped corner-first on a hard surface (this side panel faces the wall for me, so not really an issue). Just like my previous order of an ABS pre-built (a different model that I returned due to DOA video card), I have no complaints about the build quality or cable management. I encountered some odd behavior the first couple of times I booted it--it booted into Windows fine, all hardware was detected properly and seemed to be working correctly, but there was no video output during POST or when trying to enter the BIOS/UEFI. I finally resolved this by having a 2nd monitor plugged into the motherboard DisplayPort during POST, after which everything worked properly using just the video card HDMI. Windows 10 was not activated, and attempting to activate it or run the troubleshooter would give errors or messages that made it sound like an invalid license key was used. I tried calling the ABS support number for 2 days and never got through, but the key was visiting the ABS website FAQ on the sheet they provide. It provides instructions for extracting the correct product key using command prompt, which activated for me on the first try. The only way I found to control the video card RGB was using EVGA Precision X1, which I don't care for, but it installed a firmware update for the video card and didn't need to be left running after customizing or disabling the RGB. The RAM, motherboard and AIO cooler were a different story, as I couldn't find a way to configure or disable the RGB for all of these at first. ASUS Aura Sync was pre-installed, but the only RGB device it detected was the RAM, with no way to control the motherboard or AIO RGB. Upgrading to ASUS Armoury Crate reversed the problem, as it detected the motherboard and AIO, but failed to detect or control the RAM RGB. Uninstalling Armoury Crate was also a huge hassle, as it installed multiple services and components that don't uninstall properly (even their own Armoury Crate Uninstall Tool failed the first few times I tried it). G.Skill's own RGB utility also failed to detect the RAM for me. I eventually got all three RGB device controls through the following steps: 1. Uninstalled every trace of ASUS software, Amoury Crate, Aura Sync, etc. A utility like Revo Uninstaller might be necessary if you have trouble with ASUS's uninstallers and don't want to remove leftovers manually. If you installed any other RGB control software intended for the RAM/motherboard/AIO eg. the G.Skill utility, completely uninstall these as well (it's fine to leave EVGA Precision X1 installed). 2. Enabled DRAM SPD write the BIOS/UEFI (it was through one of the DRAM configuration pages under AiTweaker, the option was actually something like 'Disable SPD write' that I had to change from True to False). 3. Download and install the latest version of Armoury Crate. It will still not allow control of the RAM RGB. 4. Shut down the computer completely and perform a RAM reset (press and hold power button for ~10 seconds while the PSU power switch is off). This step might not be necessary, but it's what I did. 5. Start the computer normally and download the latest G.Skill TridentZ RGB utility, but do NOT install it yet. 6. Open Task Manager, click More Details at the bottom, go to Services tab and sort by Name. Right-click -> Stop each of the ASUS services (including the one just called 'LightingService' and the ROG service). 7. Install G.Skill TridentZ RGB utility, but do NOT run it. 8. In Task Manager, go to the Startup tab and Disable the startup entry for the G.Skill utility. 9. Shut down the computer completely and perform a RAM reset (see step 4). 10. Start the computer and open Armoury Crate from the Start Menu. It should now (hopefully) detect motherboard, AIO and RAM allowing you to control/sync/disable all three. After putting in the RM850x, I feel confident in its stability and can enjoy what this pre-built has to offer: peak performance at max settings, no obvious bottlenecks, and a sense of down-the-line upgradability in a small but solid flagship-tier build.

Overall Review: I seriously do not have anything bad to say about this. I purchased this pre-built because I have been searching high and low for the EVGA FTW3 ULTRA 3080 and this computer offered that, and a solid upgrade on most other parts I already owned. Package arrived a day earlier than was initially projected, computer was double boxed, protected with foam inserts, and had a foam insert inside the case to keep things stable during shipping. Computer powered on first attempt and took me right to the windows set-up page. No issues at all! Cables are expertly managed, it’s very obvious just by looking inside the case (and in the back) that someone took the time to put this together. Overall I’m VERY pleased with this purchase and the overall experience!

Overall Review: Showed up dead on arrival. Would power on, RGB would light up, fans would spin, but would not go into the bios or boot into Windows 10. Had an error light on the Motherboard for boot issue. Looked that up in the owners manual and followed their instructions to try and fix it, which just involved making sure things were plugged in all the way and making sure boot drive was all the way installed, still nothing. My best guess is that the foam they used inside the PC broke some things as the foam was putting a lot of pressure on multiple parts inside the PC. I took the thumb screws off the side panel and the glass literally popped up and away from the case because of the pressure from the foam. Then I remove the foam to find the graphics card is also noticeably warped (picture included) from the foam pressure again. I think a better solution needs to be found for shipping. Waiting for an RMA update this review as far as everything else goes.

Cons: -for this price point a 850w psu with braided cables should have been included rather than a cheap 750w - the 750w only has two dedicated power cables for the gpu which requires 3 on the 3080 FTW3, so 1 is piggybacked -The thermaltake AIO cooler was wired up in a way that did not use the motherboard dedicated AIO output also cooler fans were piggybacked to cpu fan header. Personally I like to see what my fans and pump are doing so I wired them up to the correct headers so the mother can recognize them in the BIOS -Also included lighting controller for AIO cooler and fans was not hooked up. -The AIO cooler tubing was laying against the GPU, had to remount cooler more forward to take up tubing slack. So the two would not contact. -Case fans are not speed controllable and only do a very low speed, so low air flow.

Overall Review: Overall this is a nice build. I did pay inflated price on this due to market shortages. The wiring and cooler issues were easy for me to address but for less handy people may never notice. Only real disappoints were the price and the power supply.

Cons: Case feels a little meh, and the rgb a little over the top and uncontrollable (theres probably a way ) I have 1 little tick on 1 fan under load, thats it.

Overall Review: I cant recommend newegg highly enough. They surpassed my expectations enormously. I ordered this pc on the Saturday it was delivered to the UK from California on the Wednesday, unbelievable. Packaging was great, tracking was brilliant (I still didnt believe it would turn up) Every question I asked was answered promptly and eagerly. After being strung along by a few competitors I didnt expect to be able to buy what I wanted in a reasonable time frame, and this was my last shot before giving up until supply was returned to something resembling normal. I usually build my own but supply pushed me into buying pre-built , There is no way I could have put together a pc as well as this, cable management is great. As mentioned the only thing I would have changed is the case, but even that scores about 7/10 all the rest is 10/10 I cannot thank newegg and their staff enough.

Cons: Very large dent on rear of tower. Was probably before assembly because there are no loose components or visible internal damage.

Overall Review: Great product overall. Working out of the box. Needs updates and a bit of work to overclock as expected. Very happy with purchase.