OUT OF STOCK
Sold by: Newegg
Shipped by Newegg
Price Alert
Add To Wish List 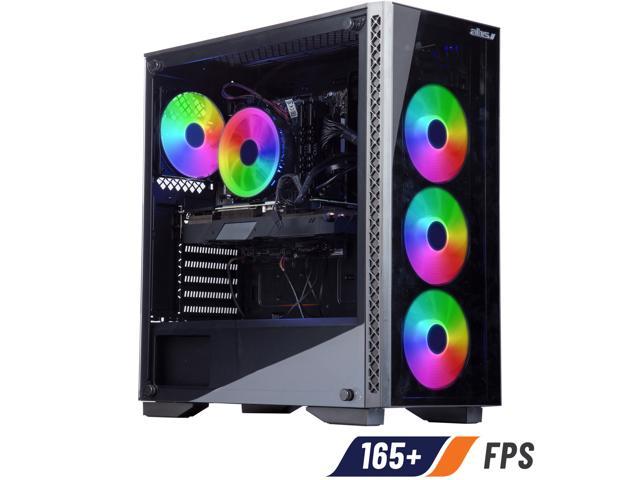 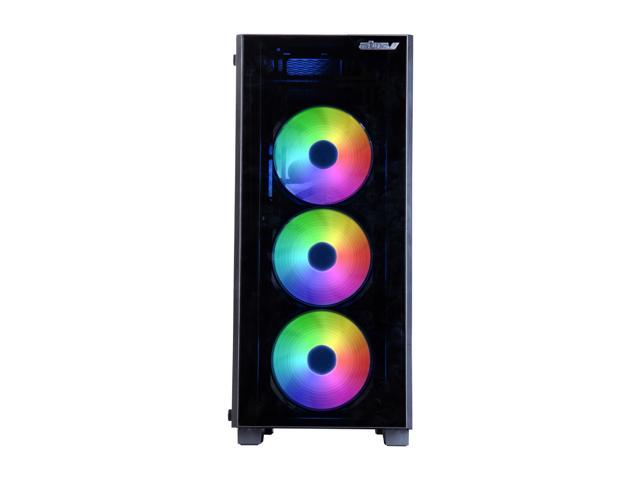 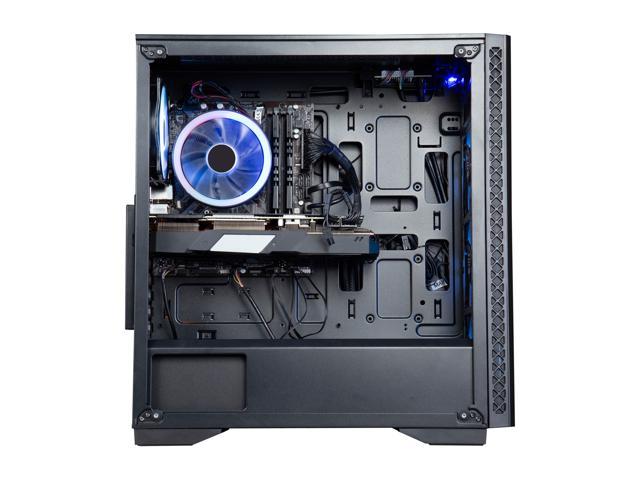 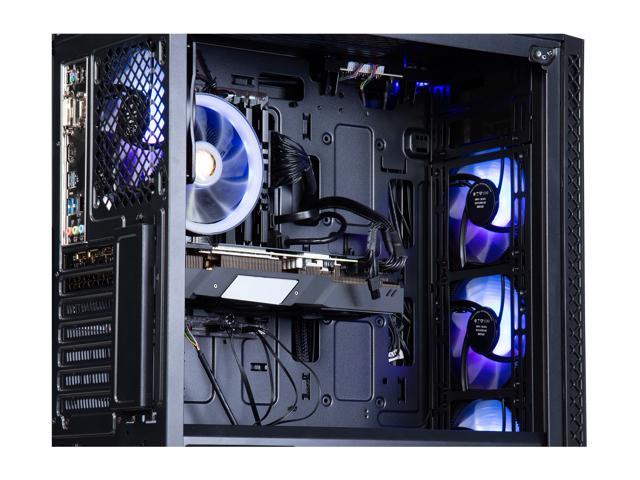 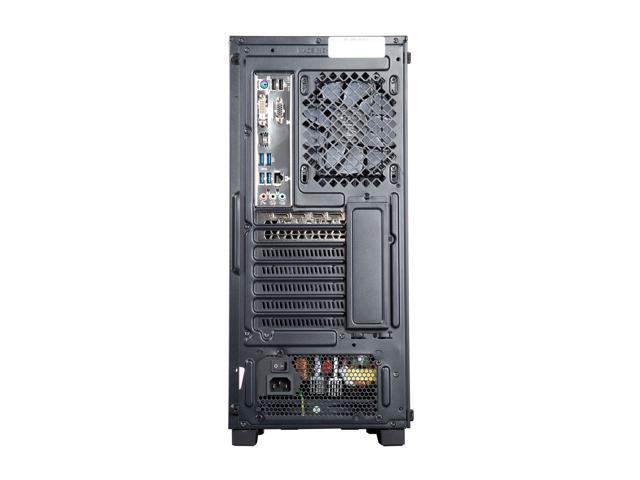 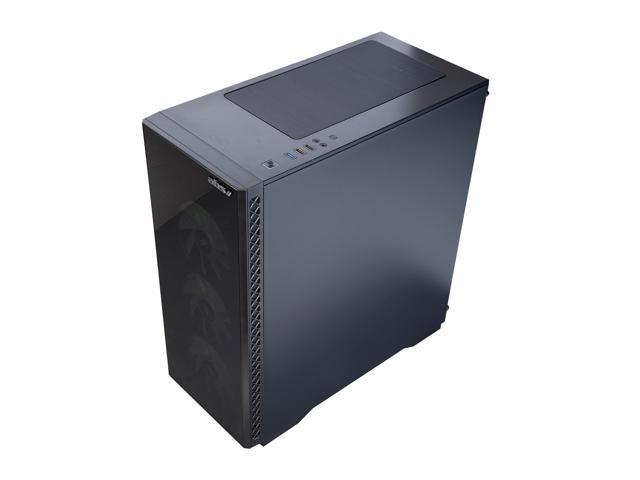 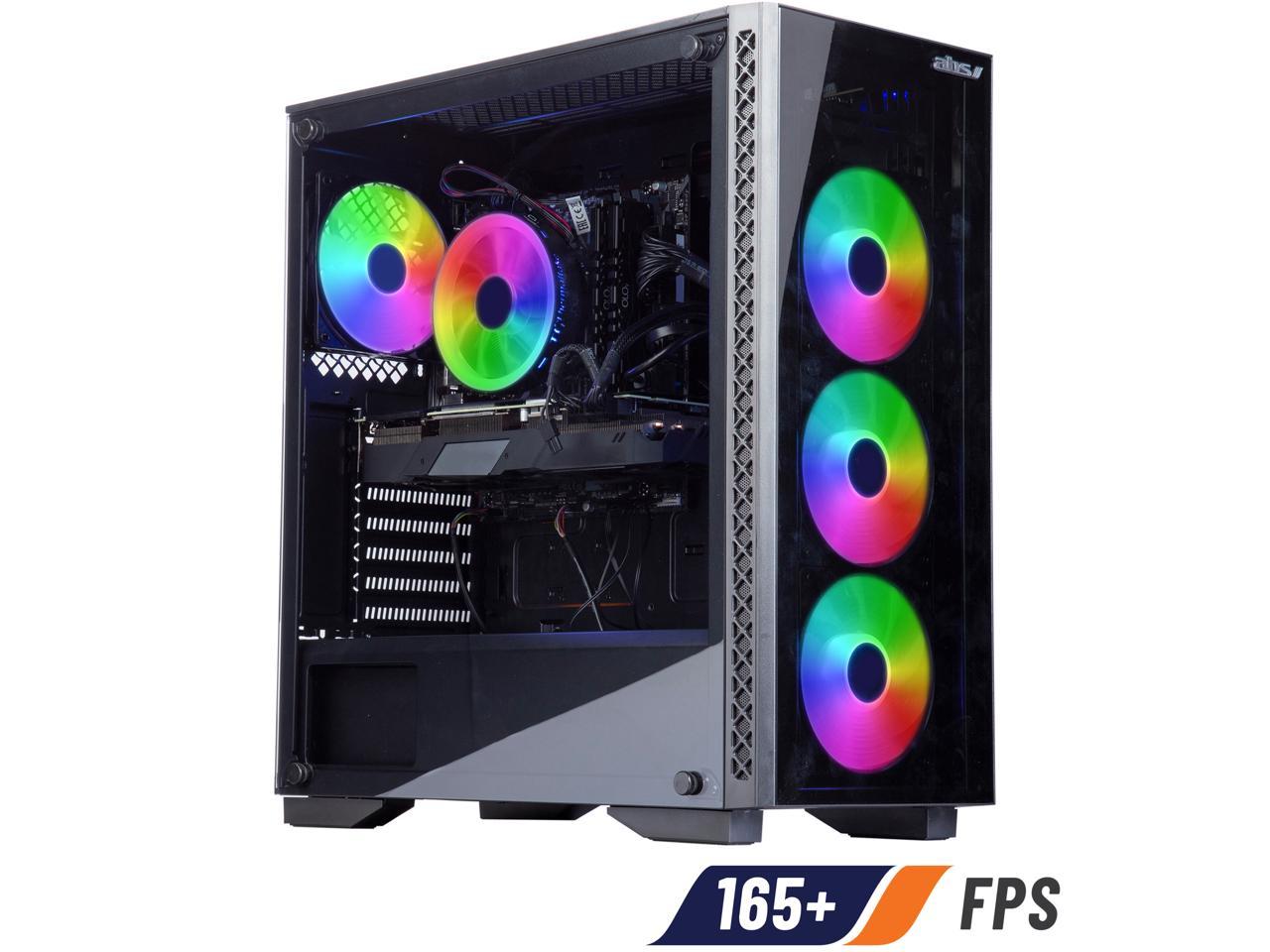 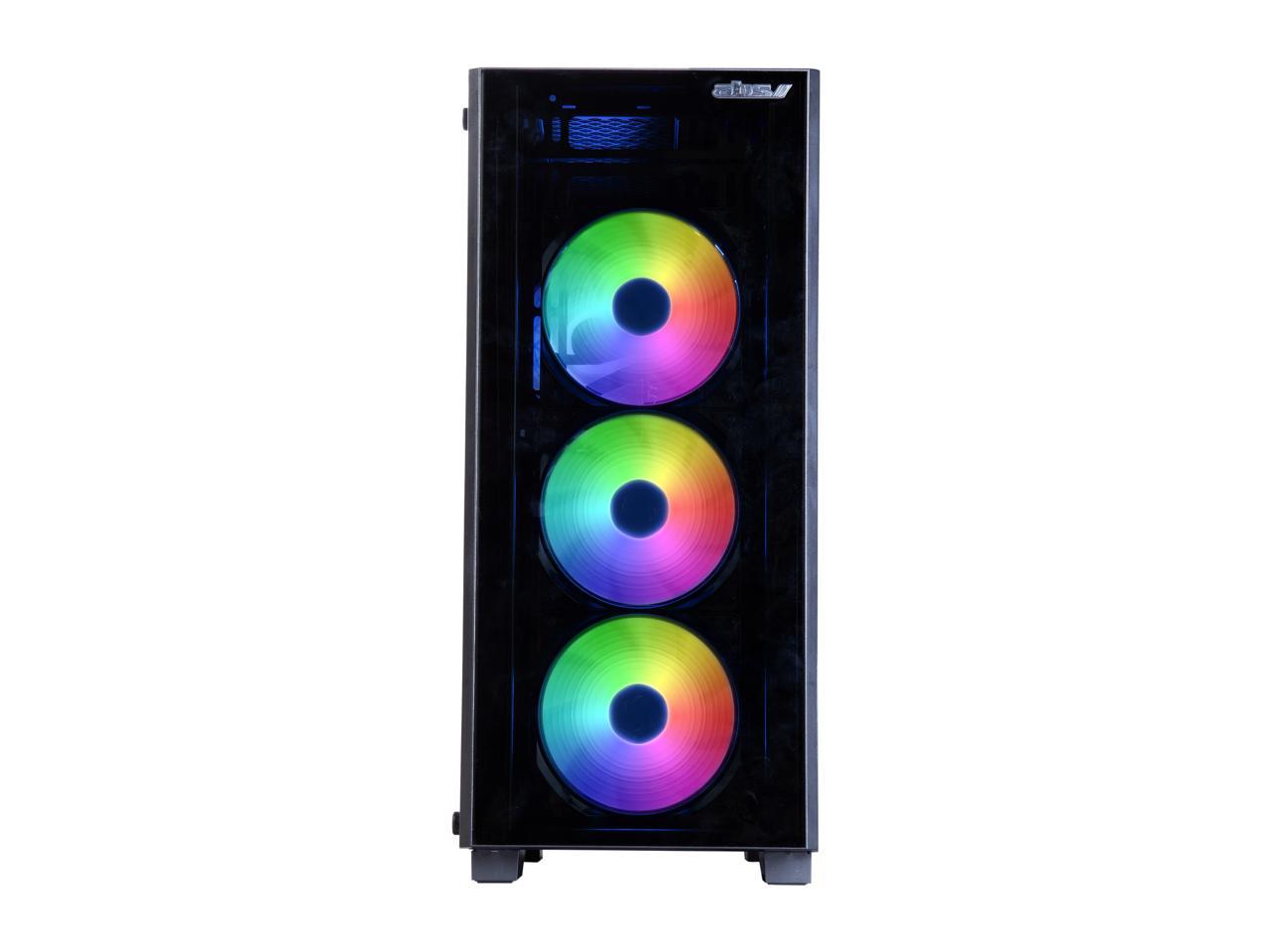 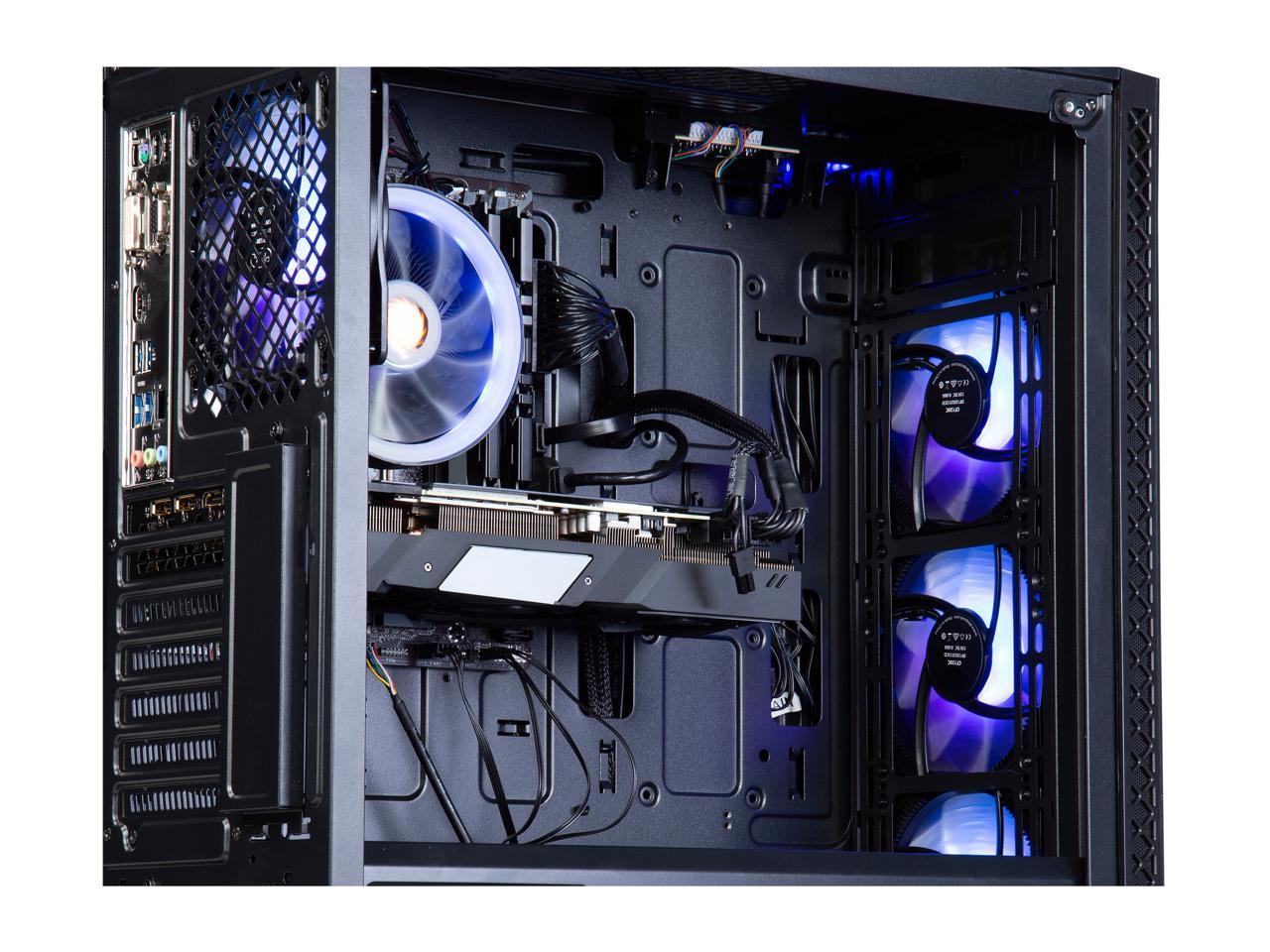 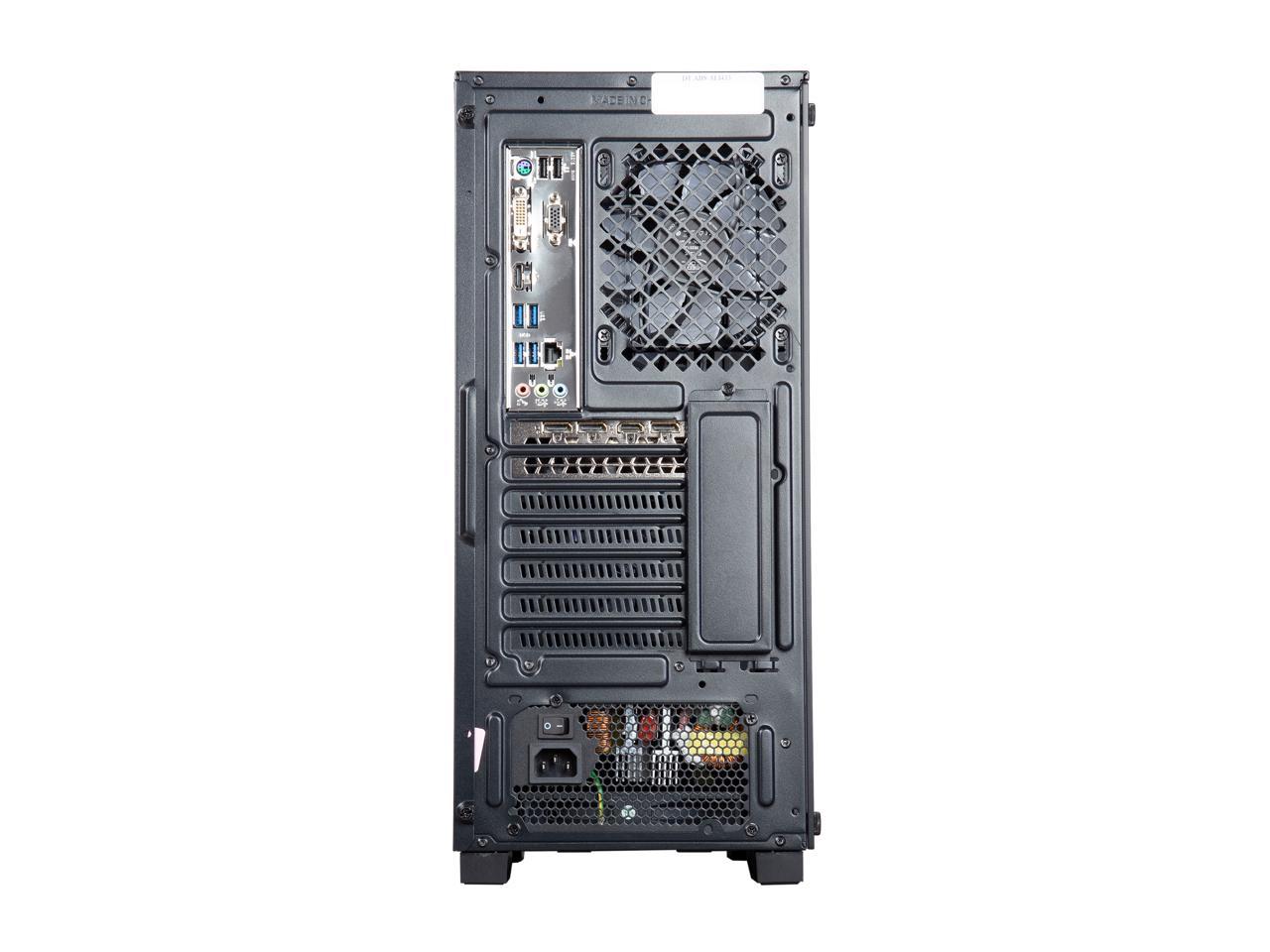 (27) Write a Review
OUT OF STOCK.
LOADING...
Overview
Specs
Reviews The GeForce RTX 2080 Super is based on the NVIDIA Turing architecture and the all-new RTX platform, bringing up to 6X the performance of previous-generation graphics cards and the power of real-time ray tracing and AI-powered DLSS 2.0 to every gamer. It's time to gear up and get super powers. Have both capacity and speed for RAM. No crashing or freezing will happen at times of heavy computing. Operating system, application and games load faster with SSD than with traditional HDD.

Four 120mm addressable RGB fans on the front panel offer endless colors and lighting effects, making your system shine from inside out.

Full-sized 4mm thickness, tempered glass side panel, and a front panel give the case a unique look to perfectly show off your inner structure.

Learn more about the ABS ALI433

Overall Review: First, the RAM wasn't even clicked into place. Not a huge issue, but could fluster some people -- and it shows that they never booted the machine to test it! There's about a 0.1% chance that RAM clicked into place somehow comes loose in shipping... Second, Edge kept giving errors related to a corrupted cache that prevented it from downloading ANY file. Either this was caused by the incomplete memory installation or an incorrect installation of Windows. The only way I found to fix this was to install Chrome over the network (if only wget worked in windows command line...). Otherwise, I'd have been stuck with a computer that could never download anything. IE and Edge still don't work because of this problem, and everything I've researched to fix it has failed. Very hard to give this a great rating when the memory wasn't even fully installed, but once fixed it runs fine! I wouldn't risk buying this system if you aren't comfortable with some of the issues I've brought up.

6 out of 6 people found this review helpful. Did you?
Manufacturer Response:
Hi Eric, We are very sorry for the inconvenience that you've experienced. This order does not meet our high quality standards and I will forward your experience to our assembly for further investigation. We would like to fix or replace your system for you. If you have any questions about your product please feel free to contact customercare@abs.com or call us at (800)685-3471. We will be glad to answer all your questions in a timely manner. Thank you again, ABS Customer Support
Cameron O.
Ownership: 1 week to 1 month
Verified Owner
Recommended, see extra device specification below.7/11/2020 9:28:12 AM

Pros: A very strong device with more power than most will need. I have had no issues with the hardware and the computer was well packaged with lots of foam to prevent damage before it’s arrival. I would gladly recommend this as a good enthusiast desktop with plenty of extra ports for expansion in the future, including two open spots for RAM, and 3 open SATA ports.

Cons: A forewarning for some, there are only two drive bays in the back compartment, and the graphics card overlaps the mounting spots slightly on the vertical front of the case. Thankfully I have three 2.5” drives so I was still able to mount them all without getting in the way of the graphics card, but it is a limitation of the device nonetheless. This should be a non-issue for most users I would imagine.

Cons: One memory card was not seated properly. Cheap keyboard and mouse, but I was intending to keep using my good ones anyways.

Overall Review: We've only purchased HP, Dell, Acer, Toshiba, and Sony in the past, but I thought I'd take a chance on ABS, given the good price for the specs I was looking for. After inspecting and setting up the computer I checked Settings -> About, etc. to make sure everything was there. The only thing I saw that didn't match the advertised specs was that it only showed 16 GB of RAM. So I called up the number on the quick start guide. I was very impressed by the tech support. The fellow guided me to make sure that the RAM cards were seated properly, which fixed the only problem.

Cons: -The back fan was disconnected but it was very easy to connect it back. -The second 16 gb RAM stick wasn't plugged in. It fell off when i opened the system. I had to plug it back, no big deal here again.

Overall Review: I absolutely recommend this product, the small issues mentioned in the cons are definitely not big enough to prevent you from buying this beast at this more than good price.

Cons: Bad Software, and i got the pc with some damages in the case .

1 out of 1 people found this review helpful. Did you?
Manufacturer Response:
Hello Valued Customer, We are sorry for the inconvenience that you experienced, it is possible that the unit may get damaged during shipment. I will forward your feedback and concerns to our package department and carrier. Please contact us at (800)685-3471 Monday - Friday between 8:00AM to 5:30PM PST or email your information to customercare@abs.com so we can begin to fix the issue for you. ABS Customer Support
Ryan K.
Ownership: 1 week to 1 month
Verified Owner
Wow. Amazing value. Some small issues.7/2/2020 6:03:11 PM

Pros: -FANTASTIC price. I bought on sale for $1600. Most computers with these components are north of $2000. -GeForece 2080 SUPER is not quite the 2080 Ti, but do you really want to spend an extra approx. $800 for something that's only a little bit better? -Very pretty lights. -No messy cables; looks very tidy inside. -Probably runs anything you want, on max settings (and if not, you'll still get good graphics settings no problem). -I really like that the main drive has 1 TB (and it's an SSD, so boot time is basically nothing). I have a laptop with a main SSD drive with only 100 GB, and it's such a pain to have to make sure most things go on the backup drive.

Cons: -If I had to say there was a weak point, it would be the CPU, which is sadly difficult to upgrade. -I had the same issues others reported of only recognizing 16 GB of RAM initially. Emailed tech support, they said to basically fiddle with it, which worked. -I also had the issue of not being able to download anything on Internet Explorer.

Overall Review: Regarding potential upgrading, RAM, hard drive, graphics cards are not generally too difficult to upgrade (provided there is space, and woo, there is space aplenty in this thing), but CPU can be tricky since it needs motherboard compatibility. So that is a legitimate concern, I think (although when your 3.0 GHZ, 8 core CPU is the weak point, you're probably doing ok). That being said, I'm not entirely sure how to upgrade things, since I can't even actually get at the hard drive. It's behind a thing that I'm too lazy to take the screws off of. And with the RAM problem people are having, the bottom side clips are somewhat obstructed by the top of the graphics card (or I think it's actually a partitioning metal panel directly above the graphics card that is blocking the clips), so it's not exactly easy to just push the RAM in with the way things are fitted. Which is kind of odd, in my opinion, given how much gosh dang space there is in it. Ok, let's talk about the RAM issue. Given that others have complained about this as well, let me tell you how I managed to fix this problem. My right RAM stick was not properly secured in place. There should be a thing plugged into the motherboard near the bottom right corner of the RAM stick (I think it's the top USB ports), so I unplugged it. Then I got my finger around the bottom RAM clip for that right RAM stick. It's kind of stuck behind the graphics card, so I pushed the RAM stick in with one hand while pulling the clip up with the other. If done right, it should resemble the other RAM stick in place. Make sure to plug the thing back into the motherboard if you do this to fix your RAM problem. I emailed them and told them they needed to fix this on the ones they ship out in the future and they said they would, so hopefully this problem doesn't happen as often in the future. Small note about RAM: There are four RAM slots, but with 2x16 GB sticks of RAM already in, it just kind of leaves me scratching my head and wondering who really is going to want to put in additional RAM. With the other specs, I imagine you're not going ultra top tier, you want something really good and can afford it, but you probably aren't doing any major video editing stuff. Are you really going to need 64 GB of RAM? Not to mention that you're getting diminishing returns because 32 GB of RAM is probably not the bottleneck here. But this is America, so I guess you're free to put your money to it with how much you're saving buying this. Let's talk about the other issue, with Internet Explorer not downloading anything. Yes, this was an inconvenience. However, it is easily solved. Presumably if you are purchasing this computer, you are doing it online somewhere. Great. Grab a USB and put a Google Chrome installer on it. Once you get the computer, install Google Chrome through the executable you downloaded (this has plenty of USB ports; 3 on the top and a couple on the back), and you're all set. Now you can download things without having to update everything like one of the other people reviewing this. And it's a pretty simple workaround that anyone should be able to do. I had a small issue of it not working with a DVI cable my old monitor came with. I doubt a VGA cable works either. It seems you have to plug directly into the graphics card, which I think only has HDMI ports (or things that look basically like HDMI ports). There are several, though, so I think you could dual-monitor if you wanted (possibly more). Probably not a problem for most people, since I'm pretty sure almost everyone just uses HDMI at this point anyways. All in all, even if it only did have 16 GB of RAM, the value would still be pretty good. Yes, the issues are minor, but they are there, which keeps this from a 5-star review in my book. If you are aware of these potential issues and prepared to deal with them, I would say it's well worth your money. Maybe have a computer savvy person handy if you don't feel comfortable fiddling with the RAM inside.

Pros: It's an excellent pc and the graphics are amazing. Bought it in part for gaming and it lives up to expectations especially on my big screen. The only complaint I have is when I set it up to use on the big screen on an hdmi connection, it wouldn't work and I couldn't figured it out. I had to call support and they told me that the connection was in a totally different place. A little note would have helped instead of wasting time calling support.

Cons: Already described the only issue.