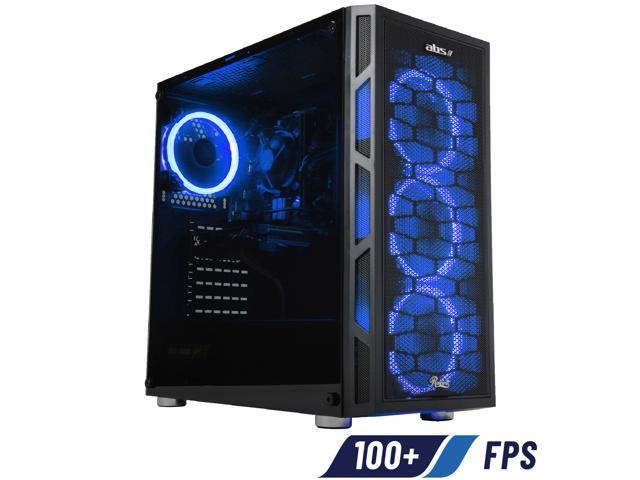 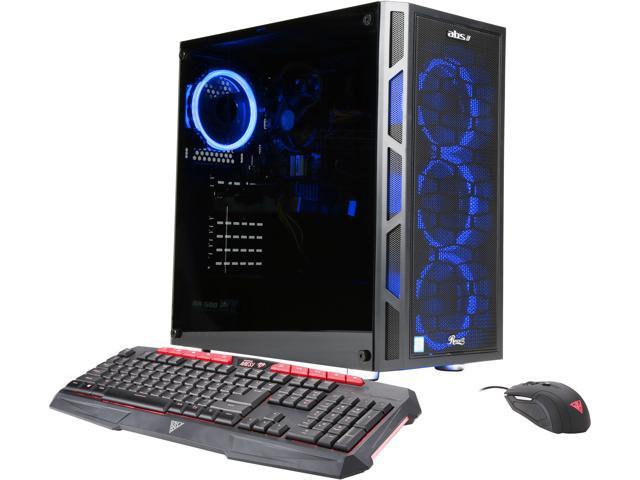 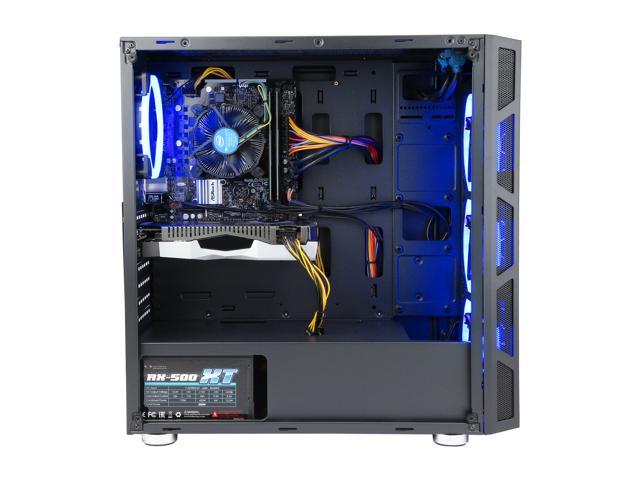 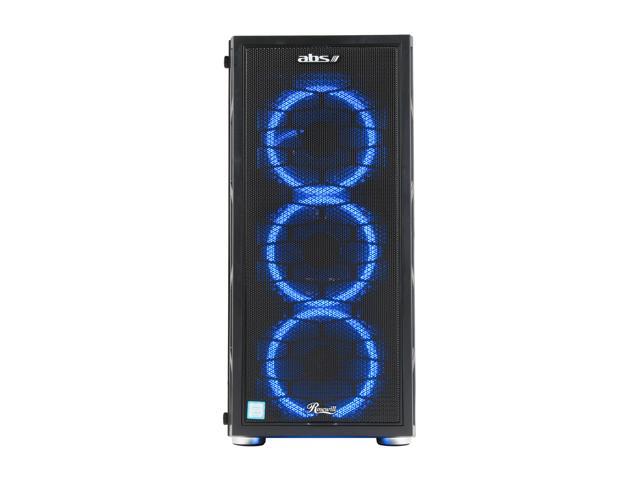 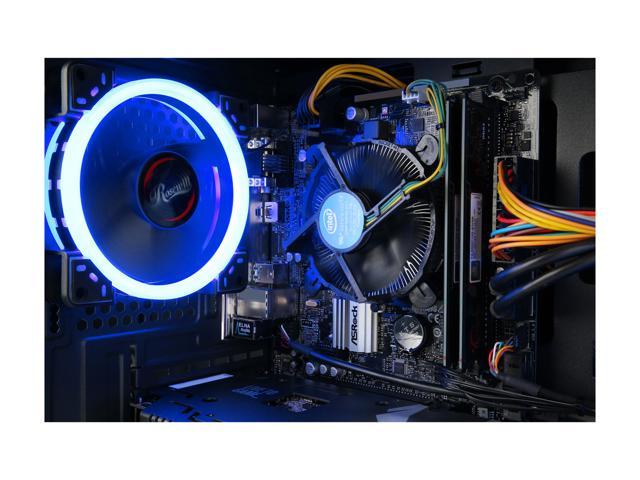 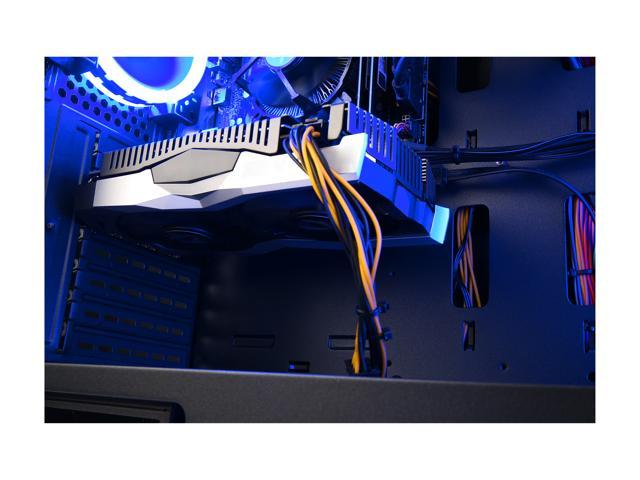 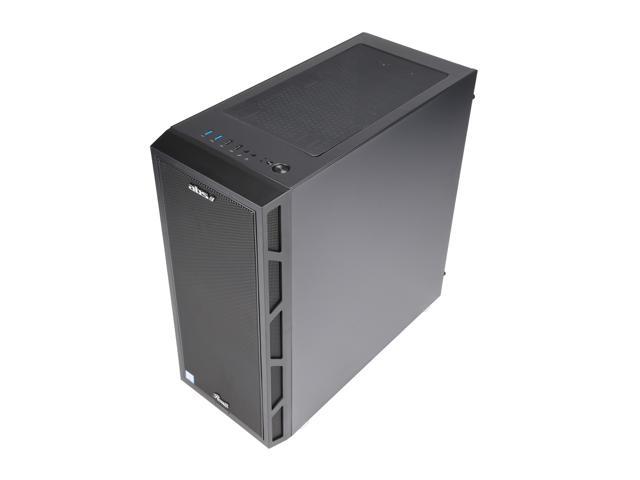 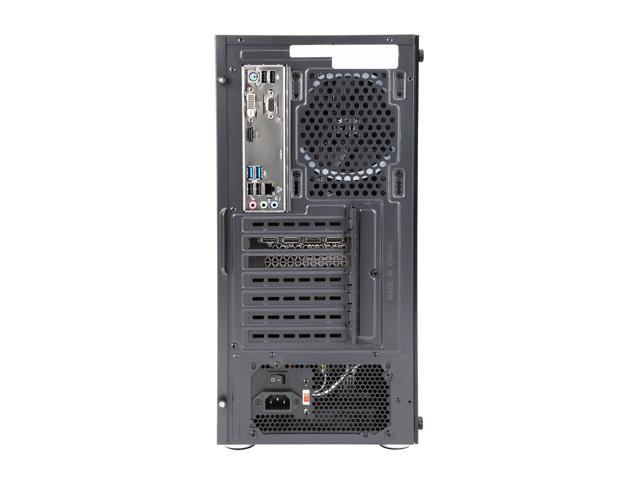 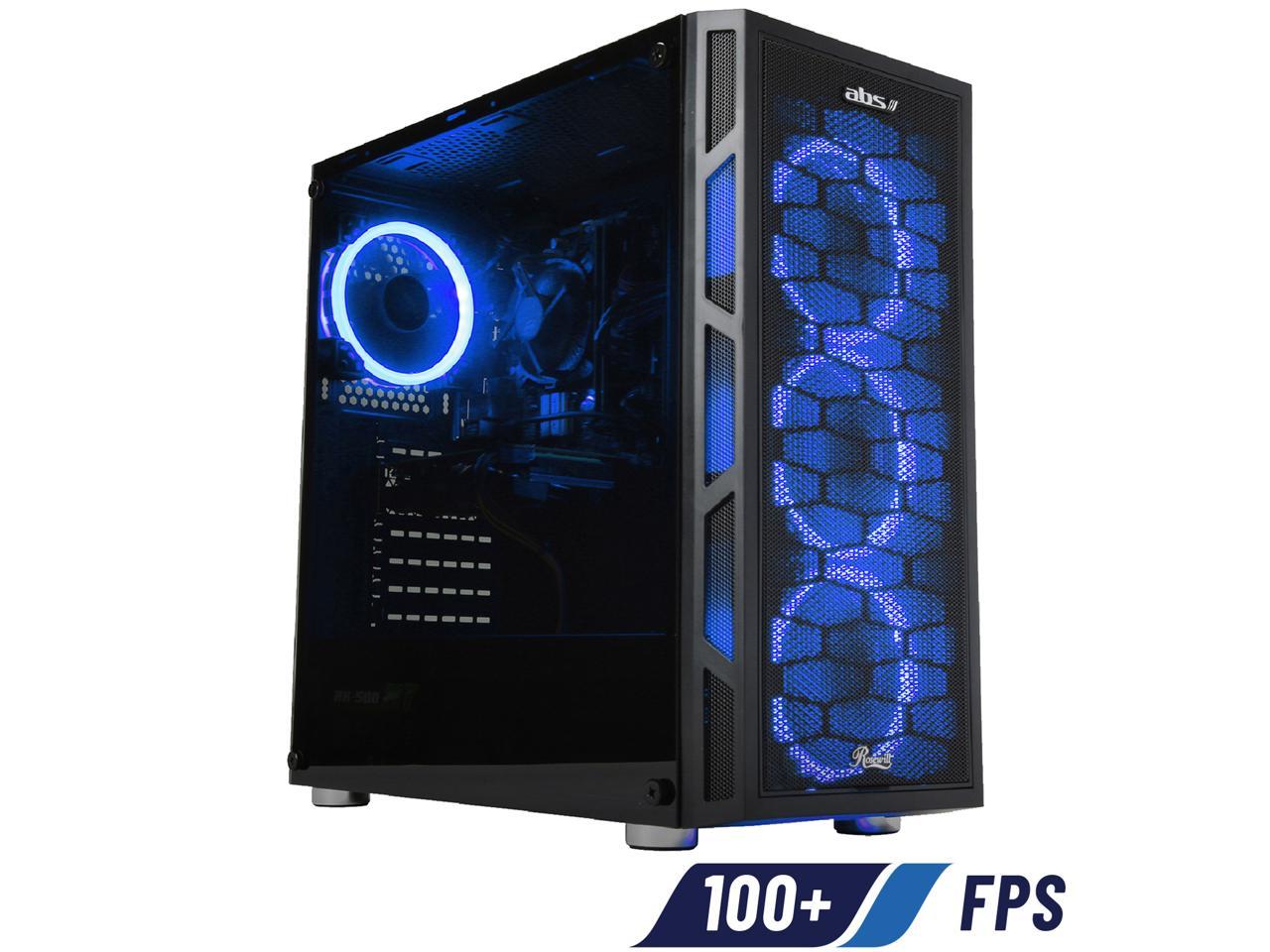 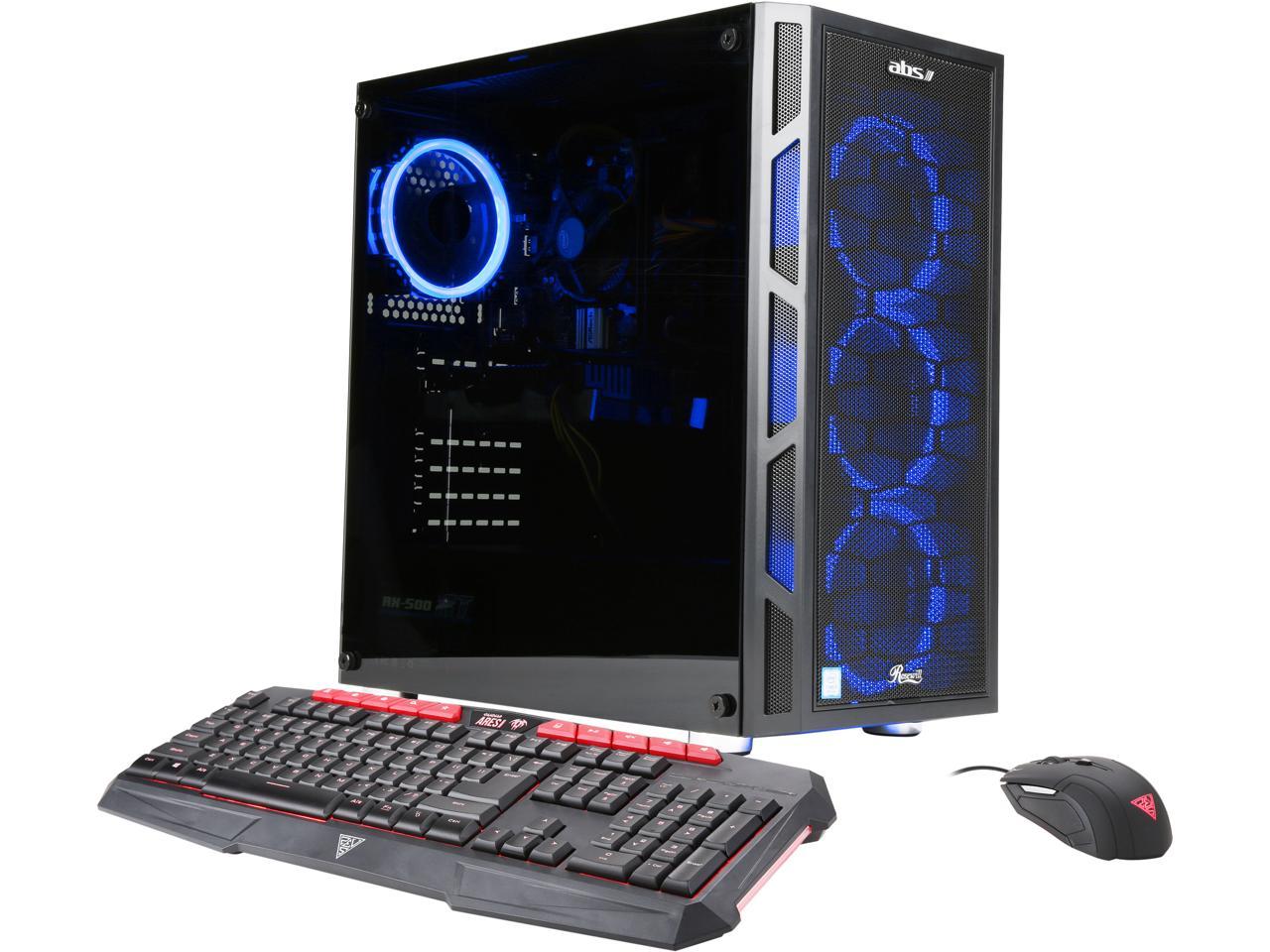 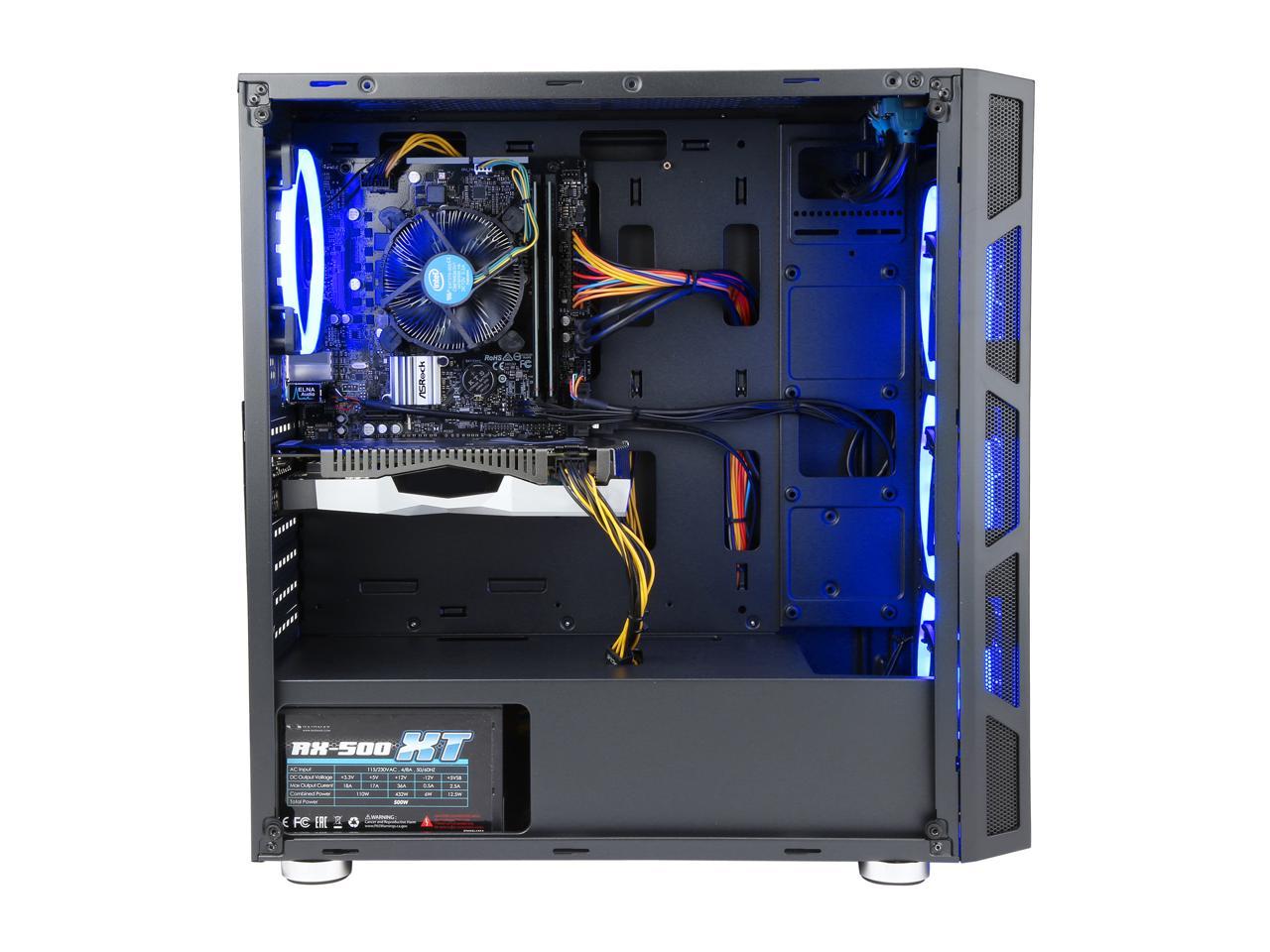 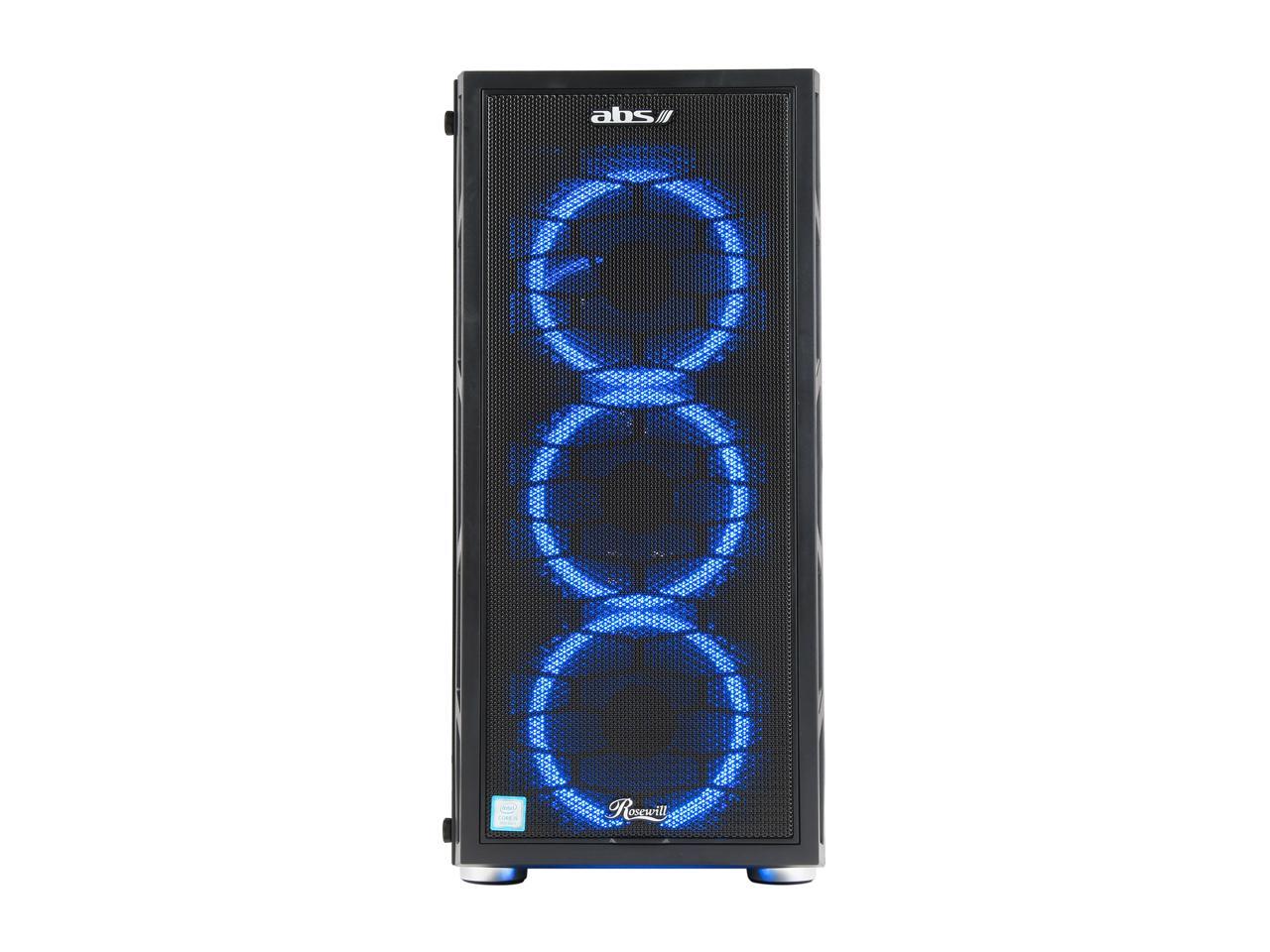 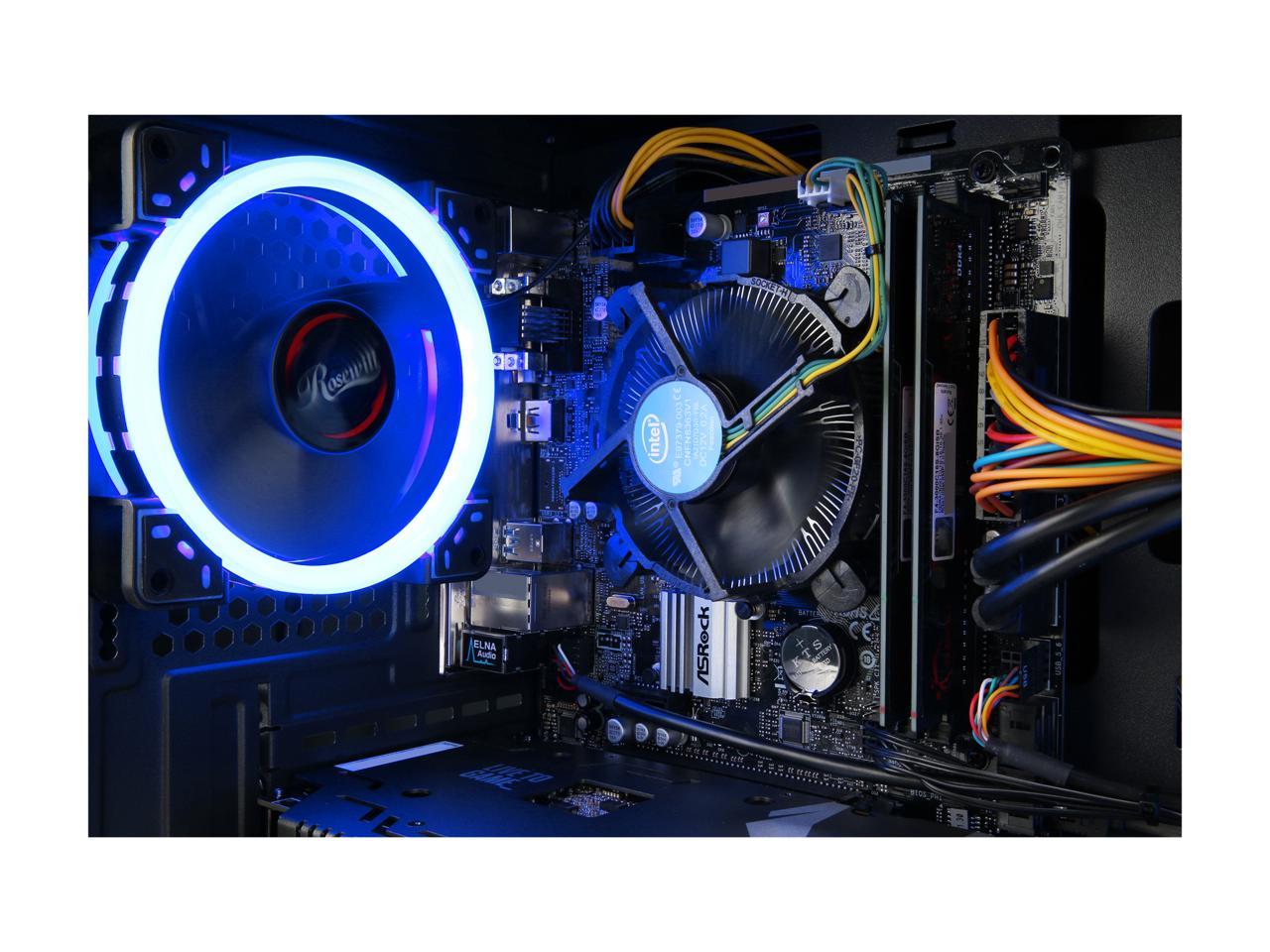 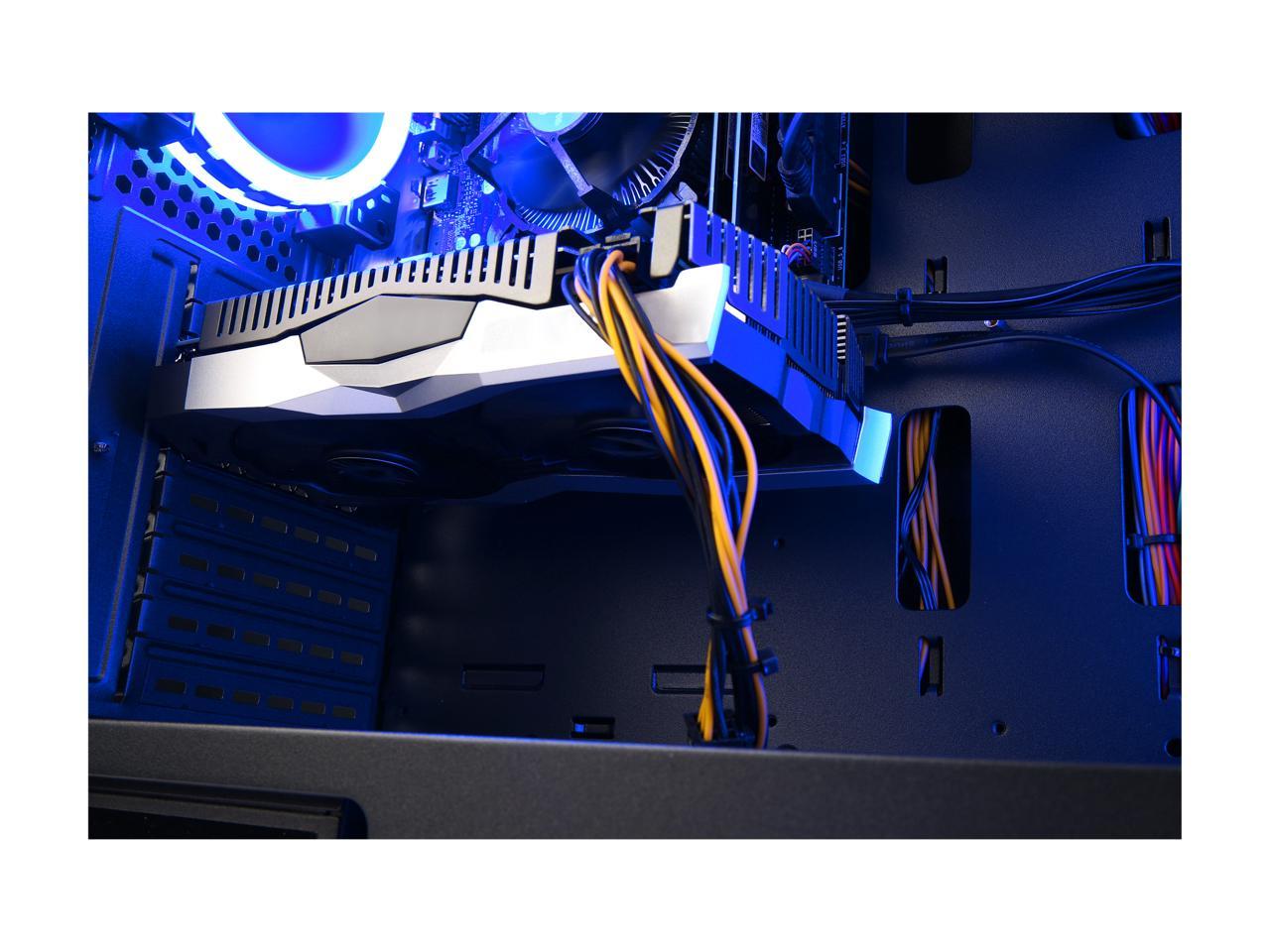 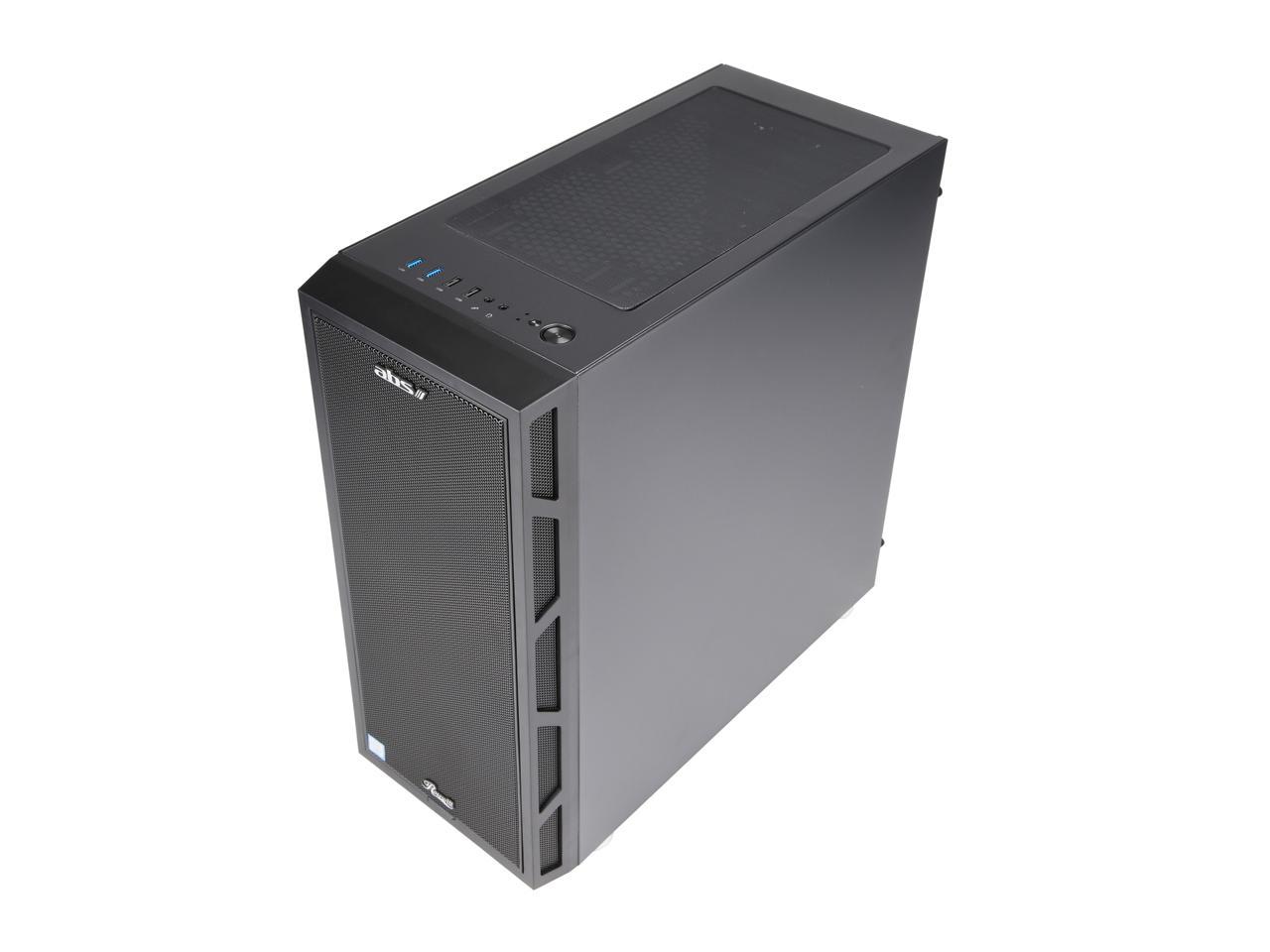 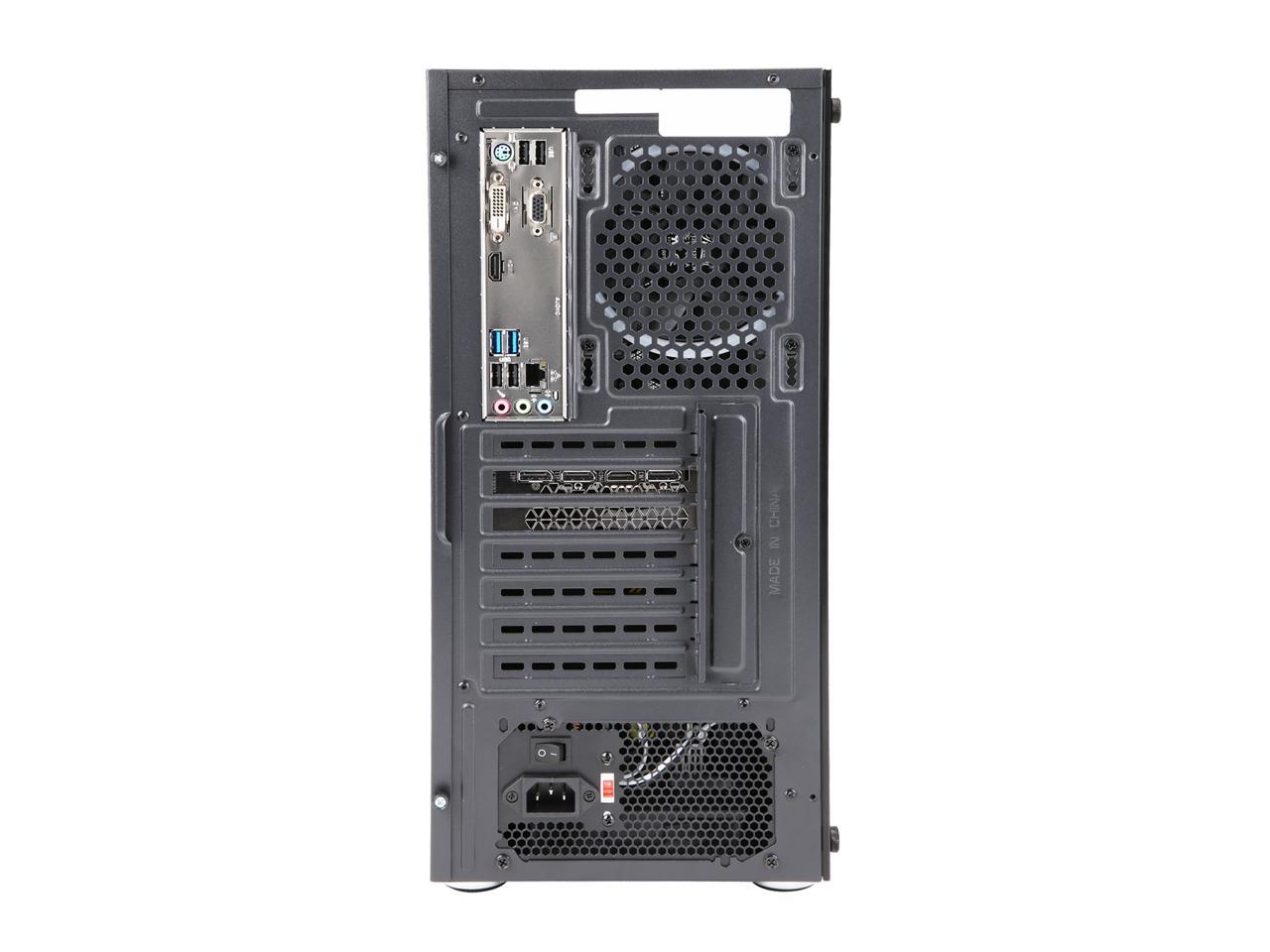 A great home PC for multimedia entertainment and gaming at Full HD and 2K, powerfully equipped with an Intel Core i5 hexa-core processor and performance-class GeForce RTX 2060 graphics card that supports real-time ray tracing. A clean-designed chassis is cooling-optimized with meshed front panel, and features an edge-to-edge tempered glass panel to showcase a clean build bathed in LED lighting. And a gaming-class keyboard and mouse are bundled for out-of-the-box fun.

The 9th Gen Intel Core desktop processors are the most powerful generation of Intel Core desktop processors. Whether you are a gamer looking for a fantastic in-game experience with the performance headroom for smooth live streaming and seamless highlights recording or you are a creator that is ready to do more creating and sharing, less time waiting, this new generation of processors is ready to take you to that new level.

The Core i5 9400F has six computing cores for amazing parallel computing performance. It has NO integrated graphics therefore a discrete graphics card is required.

The GeForce RTX 2060 GPU is powered by the NVIDIA Turing architecture, bringing incredible performance and the power of real-time ray tracing and AI to the latest games and to every gamer. RTX. It’s On. Learn more about the ABS ALI296

Pros: I liked the easy setup. Plays all my games with no problem. Installed new WWII first thing and ran great. Came with usb wireless network connection which works great. I was expecting to have to run Ethernet. Pleasant surprise.

Cons: I did have one of the side buttons broken out of the box. If that is essential for you make sure you check the mouse so you can send get another one. I don't use them anyway so no big deal for me.

Pros: Case looks amazing, blue LED's and all. Fairly quiet thus far. Entry level gaming PC that meets expected standard, has solidly performed well playing every modern game that I've tried at low to medium graphics settings, and with a little software tinkering, some even on high. Have been completely unable to overheat the machine, runs cool.

Cons: Cheap plastic, too much of it. The front plastic of the case has already sustained a pretty severe crack, which appeared mysteriously without any notable cause. The clear side panel is also made of plastic, but softer than the front of the case, attracts a lot of dust. Also, when received there was excess plastic from the front panel lock-in tabs which had broken off and were lying inside on the floor of the case, I fear to think of what might have happened had the PSU fan sucked them in. Cabling, not long after I received the product I needed to remove the cabling panel (right side) to install some hard drives. First of all, the cable management they used in assembling the product was too bunched up and was causing the side of the case to distend. I connected my necessary devices before employing my own cable management, re-zip tying it all. Secondly, the cabling from the PSU is a bit short, I had to rearrange my SATA cables and drop the DVD drive down to the bottom bay to get everything within the reach of the cables. The vent on the clear panel side really needs a dust filter. Cheap to upgrade though so not too bad.

Overall Review: TL:DR Great gaming computer for the price, but would definitely give a full visual inspection before running. Would and have recommended to a friend, with the exact words above. If I could change one thing? The case, and the PSU that I believe (from personal research) comes packaged with this case. Its a very solid build, in a very cheap box. Running 3+ months in and, other than the starting hiccups stated above, zero problems.

Overall Review: Do not buy, it will completely stop working in about a month

3 out of 3 people found this review helpful. Did you?
Manufacturer Response:
Dear Valued Customer, We are very sorry for the inconvenience that you experienced, we would like to fix or replace your system for you. Please contact us at (800)685-3471 Monday - Friday between 8:00AM to 5:30PM PST or email your information to customercare@abs.com so we can begin to fix the issue for you. Thank you again for considering ABS products, we look forwarding to resolving your concerns. ABS Customer Support
Brett L.
Ownership: 1 day to 1 week
Verified Owner
Bad!4/16/2020 9:30:12 PM

Overall Review: When I got it I didn’t receive the mouse, thought no big deal. When I turned on it worked for about a half hour before it just froze. I was able to install Steam with 2 games, zoom and ff14. When I tried to install oculus app it wouldn’t work then I got a black screen. Every time I try to turn on my computer it will not load and just goes to a black screen. I tried to restore to factory settings after having for 1 day and it can’t even do that.

2 out of 2 people found this review helpful. Did you?
Manufacturer Response:
Dear Brett, We are very sorry for the inconvenience that you experienced, we would like to fix or replace your system for you. Please contact us at (800)685-3471 Monday - Friday between 8:00AM to 5:30PM PST or email your information to customercare@abs.com so we can begin to fix the issue for you. Thank you again for considering ABS products, we look forwarding to resolving your concerns. ABS Customer Support
SALIM A.
Ownership: 1 week to 1 month
Verified Owner
PC is not working4/10/2020 8:51:12 AM

Overall Review: I was looking forward to playing with this PC. but sadly when I got it I didn't start at all :(

2 out of 2 people found this review helpful. Did you?
Manufacturer Response:
Dear Salim, We are very sorry for the inconvenience that you experienced, we would like to fix or replace your system for you. Please contact us at (800)685-3471 Monday - Friday between 8:00AM to 5:30PM PST or email your information to customercare@abs.com so we can begin to fix the issue for you. Thank you again for considering ABS products, we look forwarding to resolving your concerns. ABS Customer Support
Jude B.
Ownership: 1 day to 1 week
Verified Owner
Great for Gaming1/19/2020 9:07:10 AM

Cons: Bad packaging They don't give you the extra SATA cable that your mother board comes with Have to manually adjust ram speed Video card sags due to them only using one of the screws to secure it to the case Not enough storage for gaming

Overall Review: I would but it again Would be great if they include the extra SATA Cable as now I have to go buy one

Pros: Powerful, easy to set up, fast, excellent graphics. I've yet to run a game that couldn't be put on max graphics (granted I don't have any super new releases) but games like Skyrim and Sims 4 run like a breeze.

Cons: Microphone and Audio jacks on the front are acting up a tad. Not sure if they're loose or what, but it's frustrating. No wifi supported.

Overall Review: Would recommend, but be prepared to use ethernet or have an adapter handy for wifi.