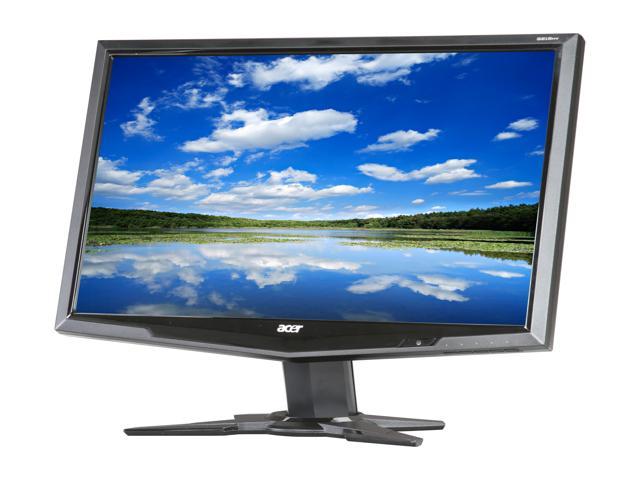 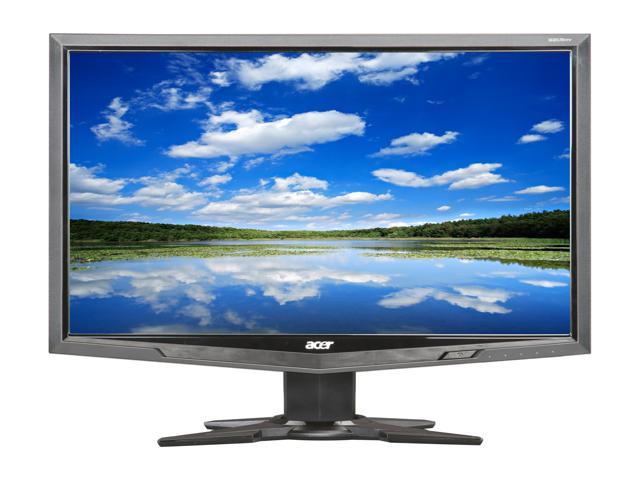 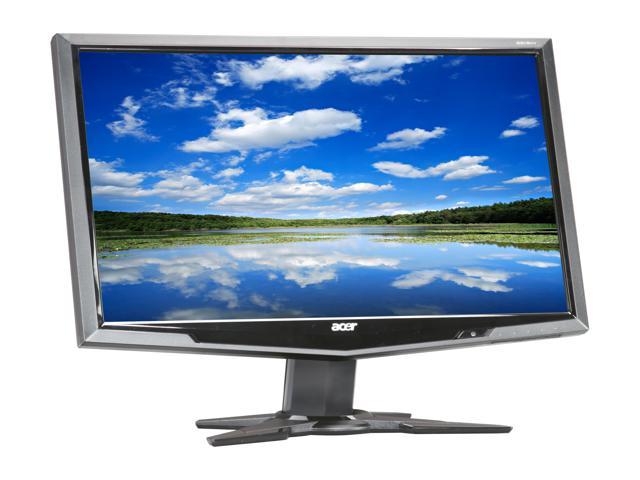 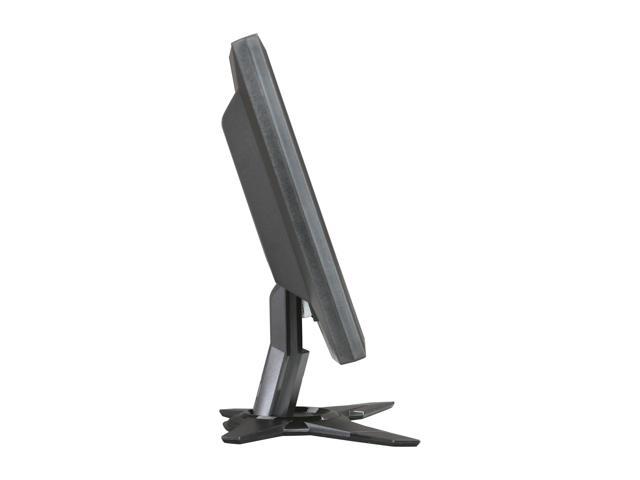 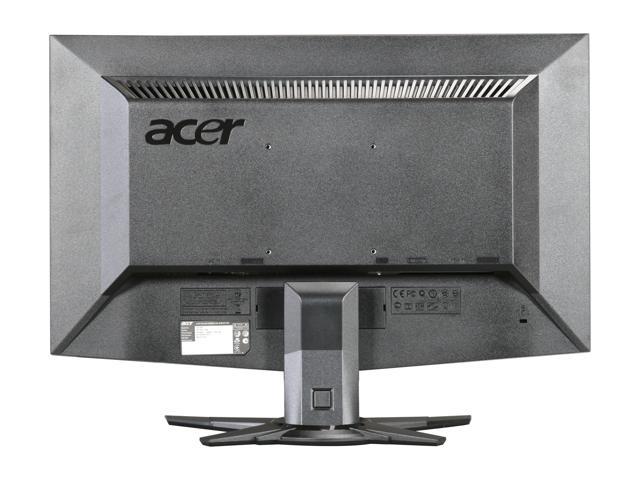 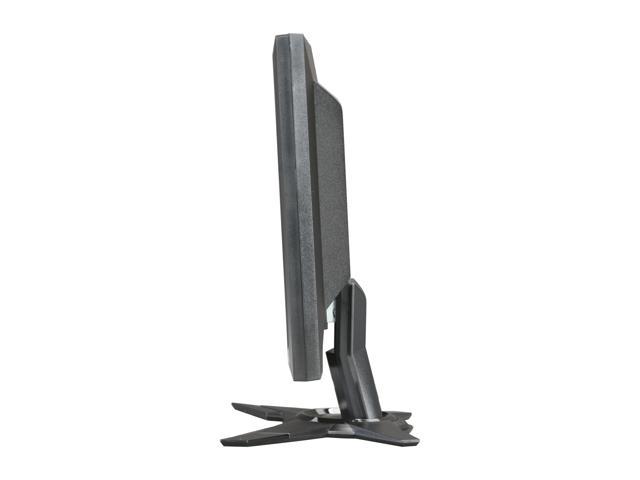 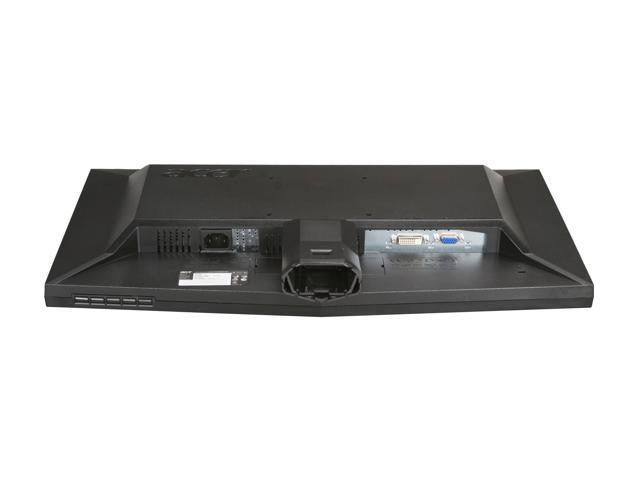 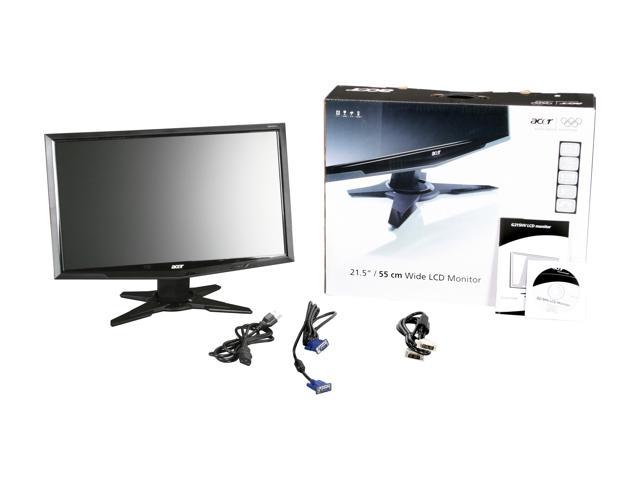 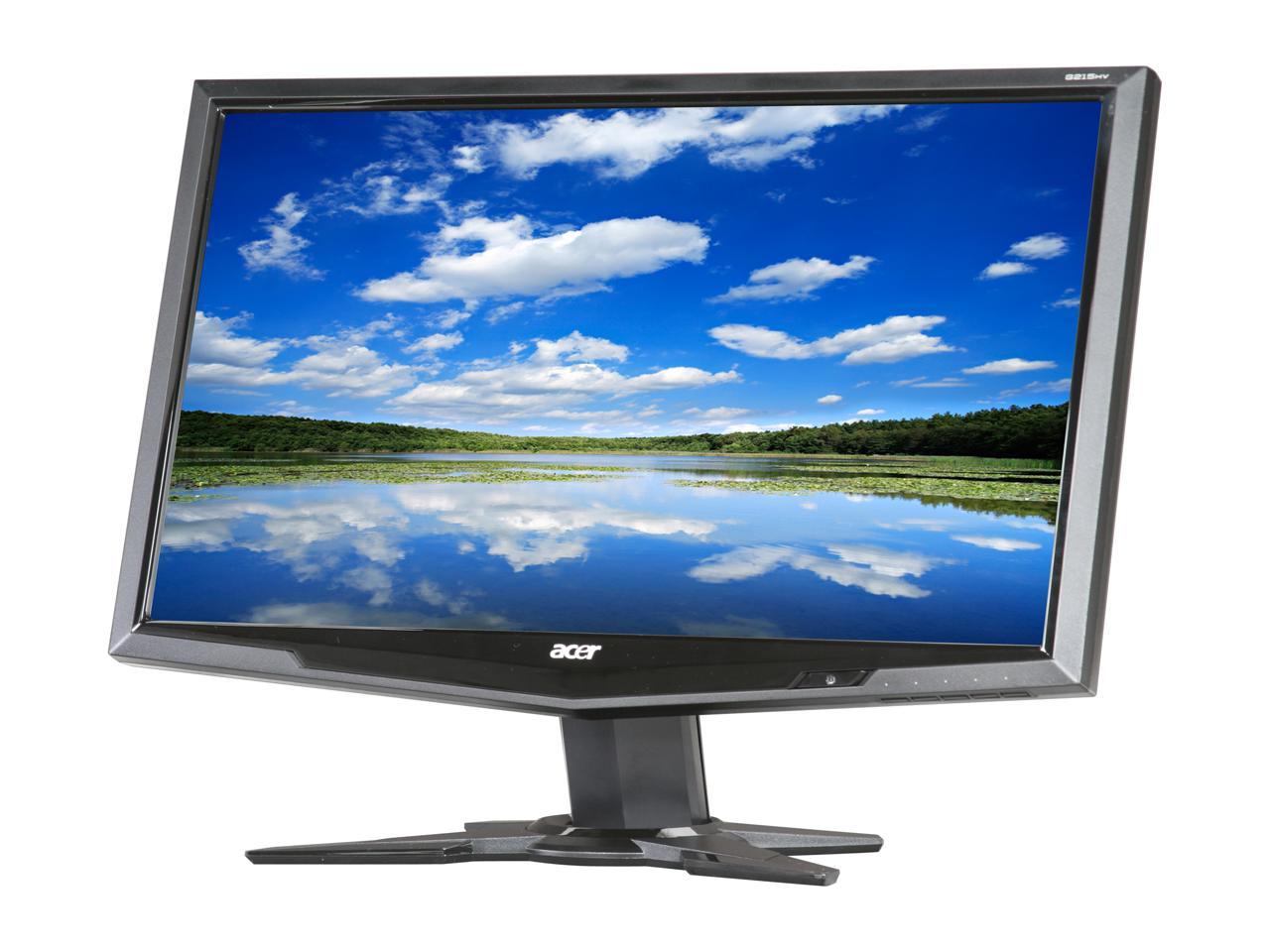 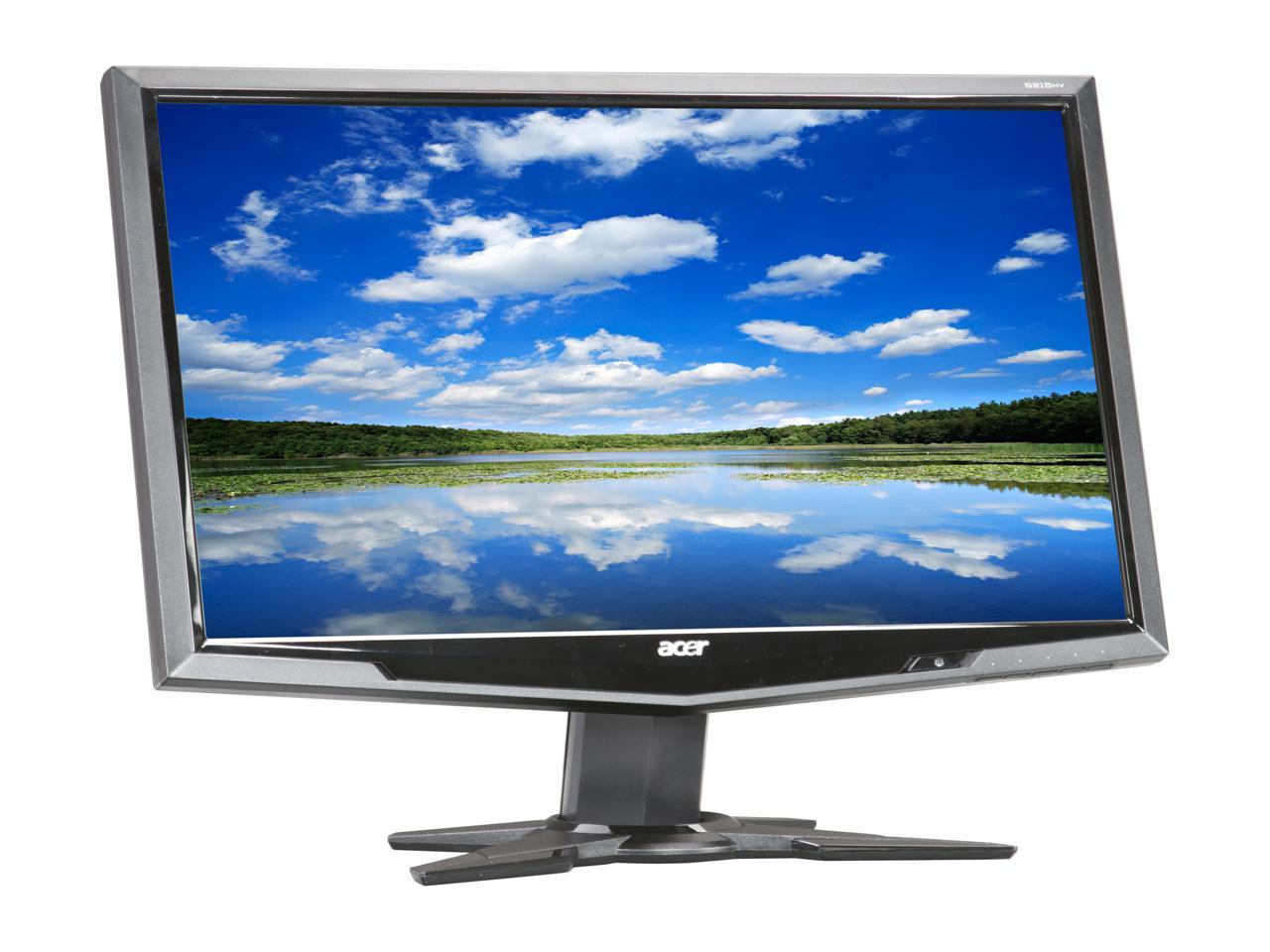 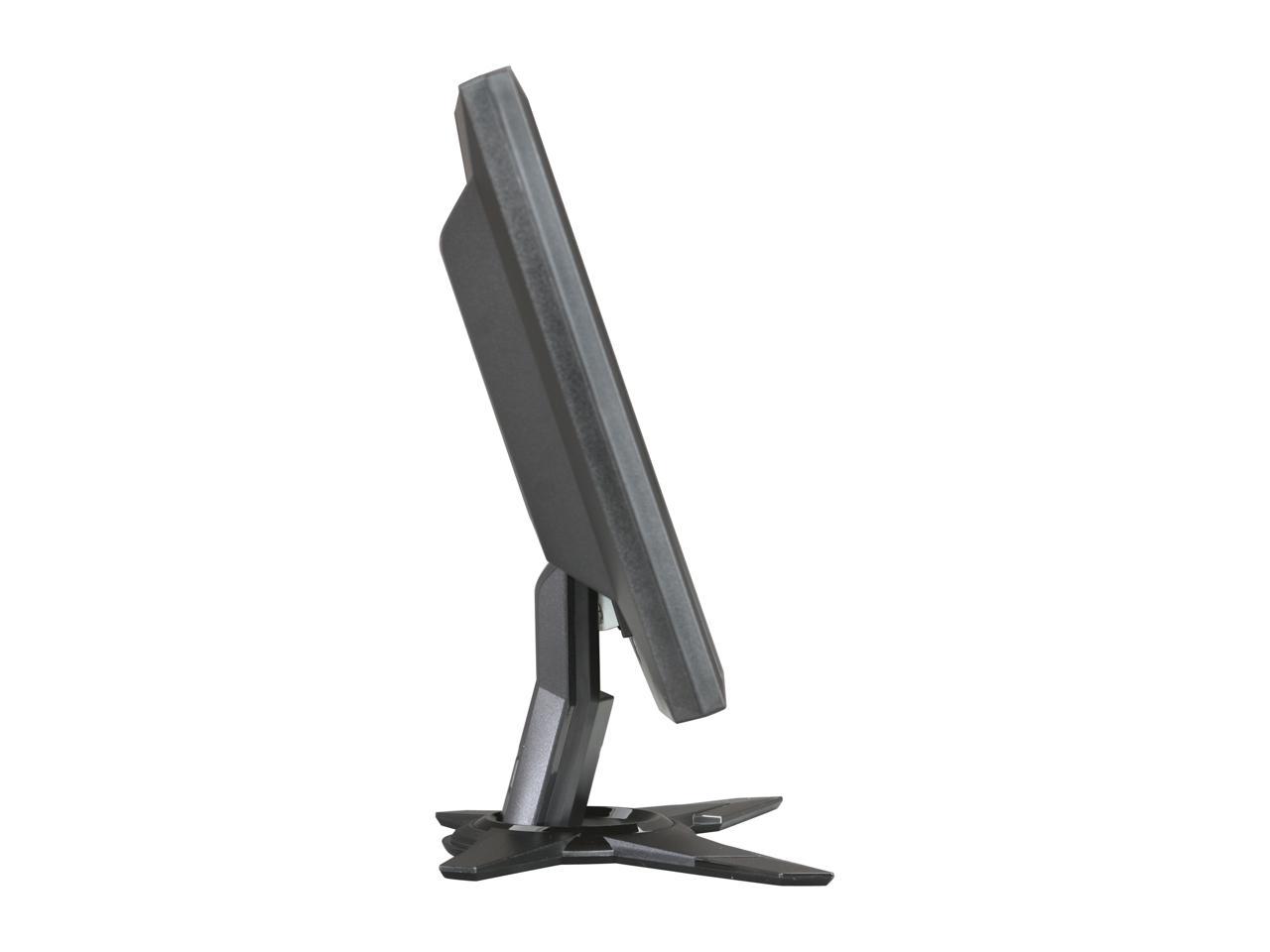 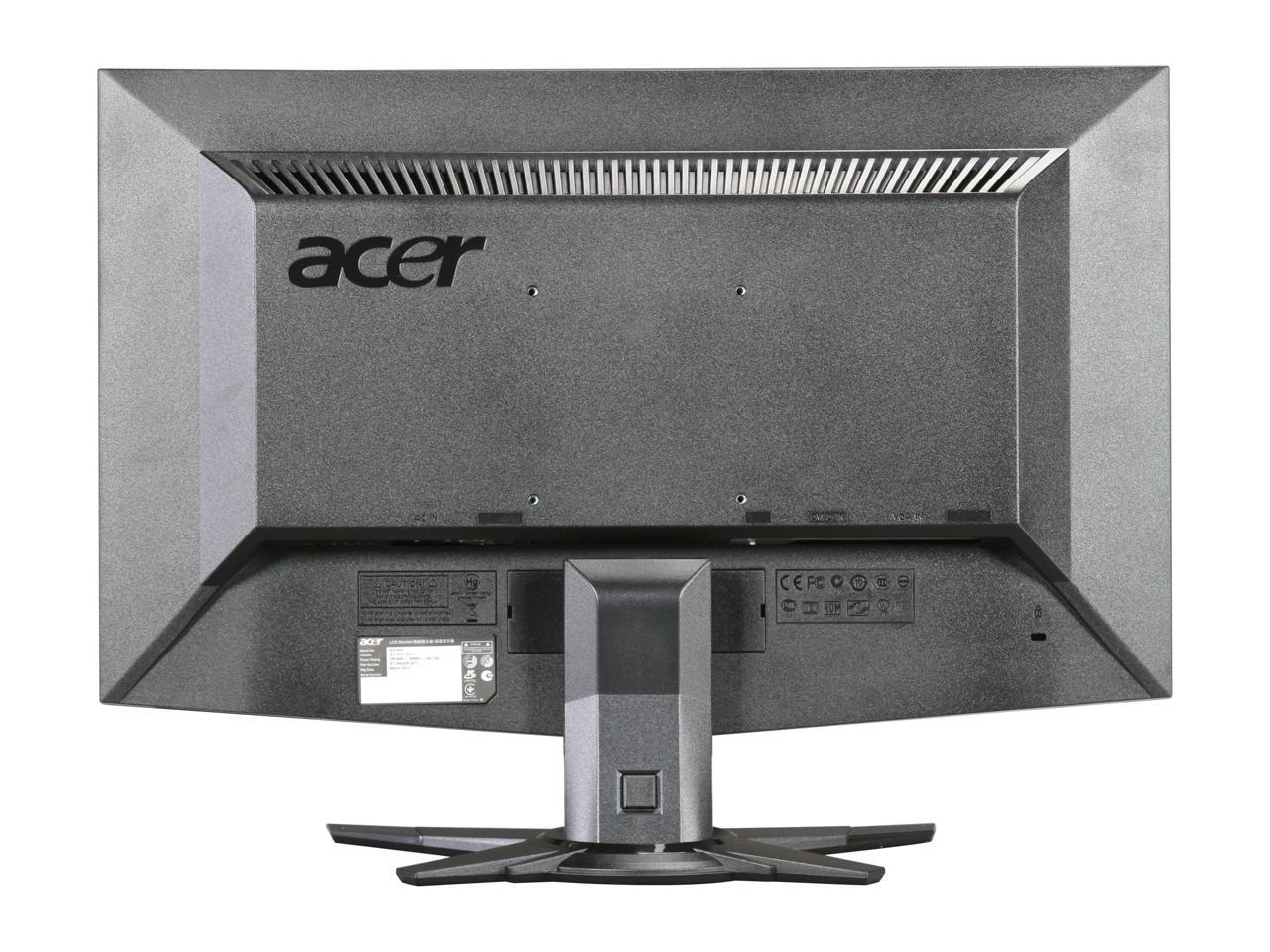 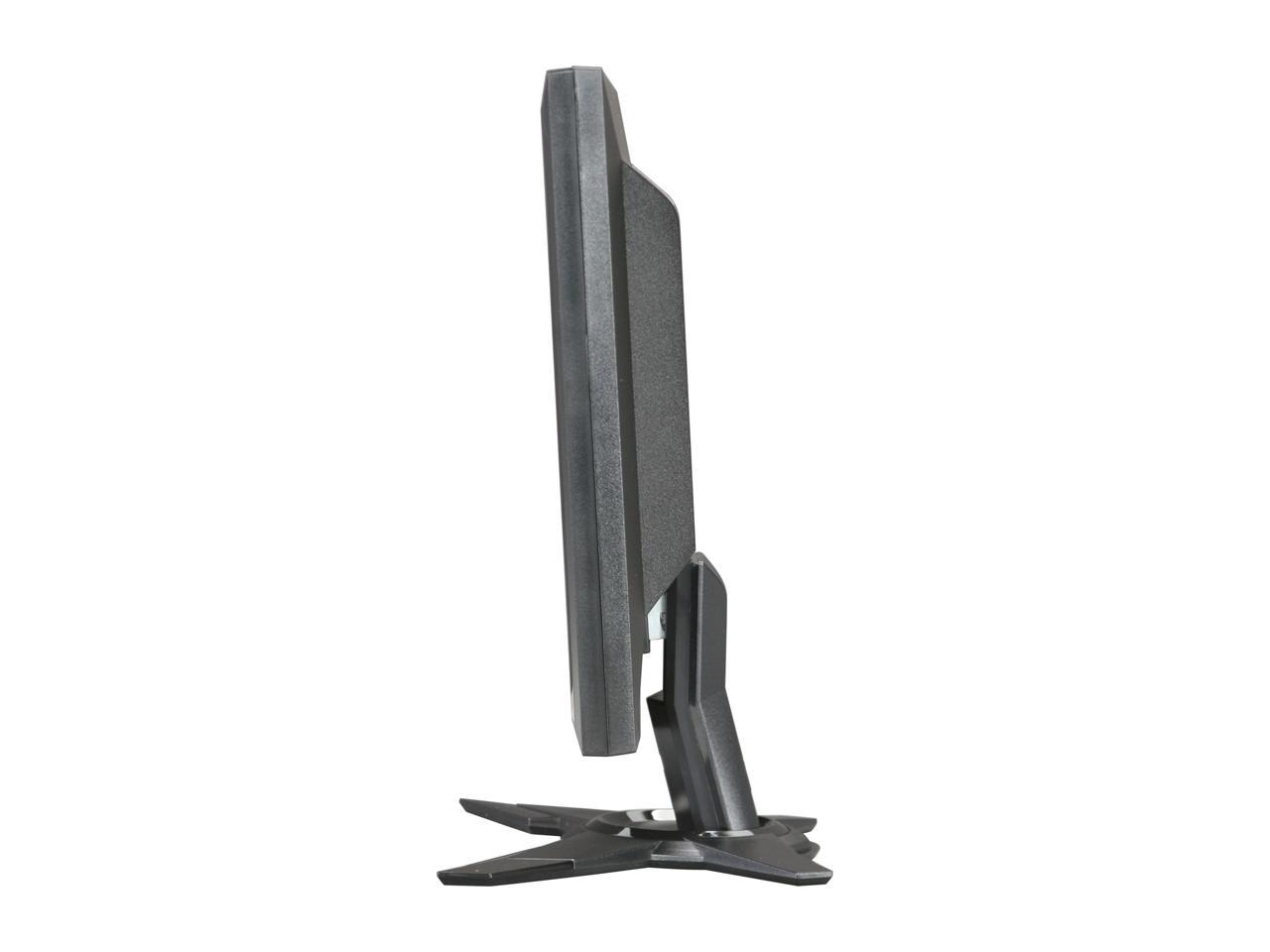 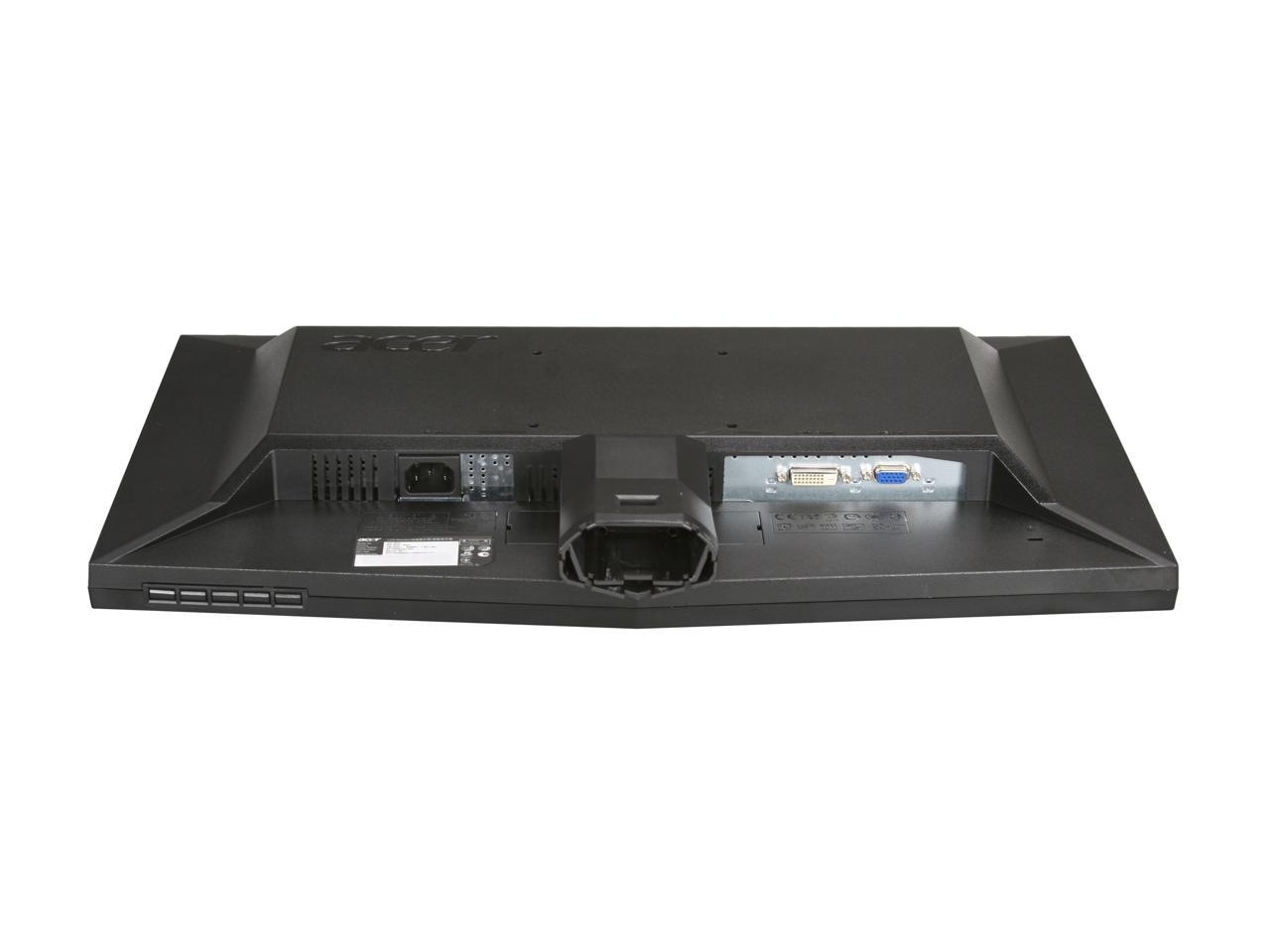 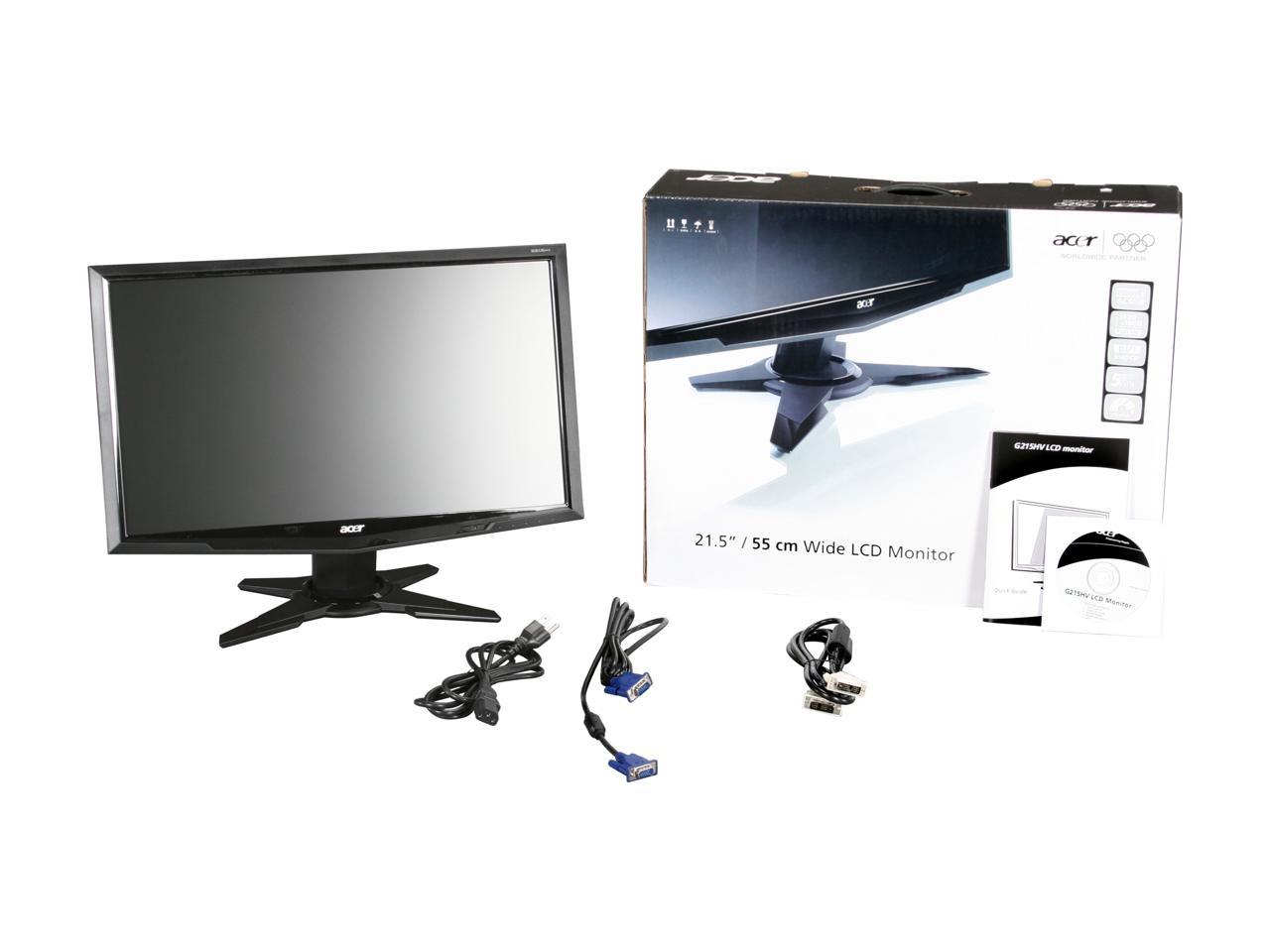 (98) Write a Review
OUT OF STOCK.
Overview
Specs
Reviews
The Acer G Series displays engaging high-definition visuals and crystal-clear text on its cinematic widescreen. The brilliant design and simplified functionality make the great value of this monitor easy to see!

Cons: Picture's just not very good VERY, very poor viewing angle Buttons (except for power) are on the bottom of the screen

Overall Review: Many reviews here posted a problem with the bottom of the screen being brighter than the top. I had a similar problem - to me, it just looks like this monitor just has an unusually small viewing angle, both horizontally and vertically. It really only looks good if your eyes are level with the top of the monitor, the monitor is perfectly vertical (or even tilted down a little), and you never move your head an inch. I wish Newegg had posted the viewing angle for this monitor. I finally found the specs on another site: 90 degrees horiz., 65 degrees vertical. That's not very good. In comparison, I just bought the Acer S220, which has been the same price on Newegg as the G215. Its viewing angle is 170 H & 160 V. Much better. And honestly, even after going through the same calibrations in Windows 7, this picture on this one just looks worse. Stay away from this one, even if it's cheap. It's just not worth it. If the S220 is the same price, or even close, buy that one instead.

Pros: Price - Bought it for $109 shipped. I love the overall design. Easy to switch inputs and is a nice sleek design.

Cons: Difficult to change the settings, two different monitors look the same but are completely different.

Overall Review: I bought this monitor for a dual monitor setup. The other monitor is a acer g215h abd that i bought a year ago on newegg. These are not even close to the same monitors. The g215h abd is a much better monitor. With a contrast ratio of 50,000:1 instead of the g215hv's pathetic 20,000:1. It's the same with the brightness, the g215h abd is rated 300cd/m² and the g215hv is rated at 200cd/m². Sitting fairly close to the monitor they look exactly the same. If you stand up or change the angle that they are calibrated for the g215hv looks really fuzzy. I will sell this monitor and get a g215h abd. I took off an egg because it's just not as good as the original is.

Pros: 1920 x 1080 Clear picture Comes with DVI. Another reviewer took an egg off for HDMI. Since it doesn't have speakers, there's no difference. Both are digital signals, so there's no difference. System recognized it right away and changed the resolution to 1080. Looks great playing games and watching movies. Got mine for $137. Wish I waited, now its cheaper.

Cons: Glossy finish attracts dust, but nothing a nice wipe will do. Stand is part plastic, rather have all metal. Nothing to take an egg off.

Overall Review: Acer is a great company for monitors. Laptops and PCs, that's a different story. But great product and I'm very happy with it.

Pros: We purchased 5 G215H's from another vendor (I hope that's the same as this NewEgg listed unit). All five were perfect and have the best picture I've seen in the 20"-23", 1080p class. All are used in an office environment, so I can't comment on gaming, but the picture is very good. Can't say it's super bright, or has exceptional contrast, but the overall above-average-ness just combines to give a great picture. No bright edges, no peculiar areas. Really good color. No dead pixels or DOA's over 5 units.

Cons: Just very minor niggles at this price point (<~$135). The stand does not adjust for height. And when changing screen resolutions, for instance when switching a KVM between two computers using different screen resolutions, the change takes about 3-4 seconds, which is slower than I've seen on some other monitors. Physical controls on the monitor are not labeled (not really enough bezel to print label text on), but I thought they were easy to figure out and use. I can't say if they're well documented in the manuals, since I never had the need to refer to them.

Overall Review: Just a terrific 1080p, 21.5" LCD monitor. If you want to use this or any other 1080p (or better) monitor in its native resolution (which is when LCD screens clearly look their sharpest), make sure your computer's video hardware supports the maximum resolution. Some older computers' stock video hardware may not.

Pros: -Inexpensive, for the size -Full 1620x1080 resolution -Looks nice before you turn it on

Overall Review: The colors just look so unbearably dull. The backlight is also horrendous, and very inconsistent in its illumination. Some areas of the screen, blacks look pretty decen't, others, they're an ugly washed out gray, thanks to the backlight, making it so that there is literally not a single good viewing angle, not just limited. No matter at what angle you're looking at it, part of the screen will look awful. This might be an acceptable office monitor, but for extended web-browsing/ entertainment, I wouldn't recommend it. If you want it for gaming, as I did, RUN AWAY from this monitor, avoid it like the plague. I'll be returning it, for a refund, and getting a higher end monitor.

Pros: Having full 1080p resolution at your disposal is nice, especially at the $119.00 price tag I picked it up for. The monitor came well-packaged and with no dead pixels. After installing the proper video card drivers, I was able to bump the resolution up to the full 1920x1080 and was very pleased with the picture.

Cons: The stand is cheesy and not very adjustable.

Overall Review: A great, large monitor for the price. I wish the stand was beefier, but it's a small qualm.

Pros: The price for one thing is very good for a 1080p screen.. the screen is a true measure... 21.5 inches from screen corner to corner instead of including the bezel in the measurement

Cons: it has a terrible viewing angle after a while it loses vibrance

Overall Review: i have 3 in eyefinity the middle screen i've had for about a year and my two other screens i got a week ago... you can totally see that the old one has lost some color and brightness

Cons: It has a hard time being a monitor Extremely washed out terrible viewing angle My coworker had to prop it up just so it was the at the right height to correctly see the screen. Even at correct height it is terribly washed out. no adjustable stand means you can't even tilt it to view correctly.

Overall Review: Pass on this monitor unless you are really stripped for cash and don't really care about viewing angle.