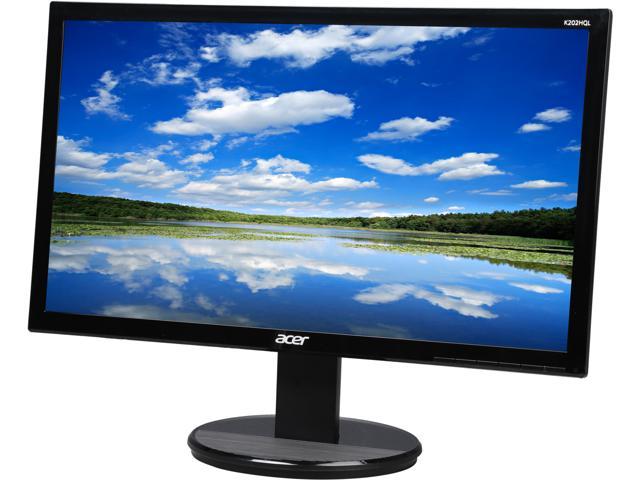 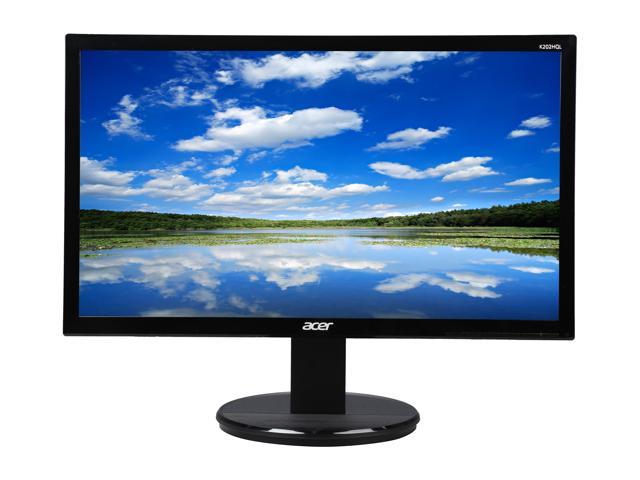 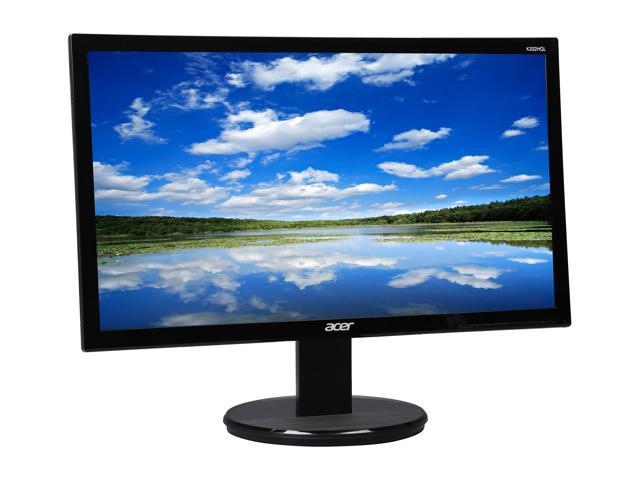 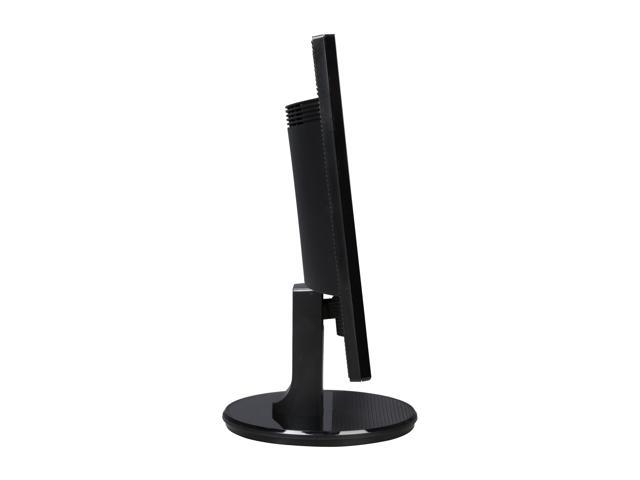 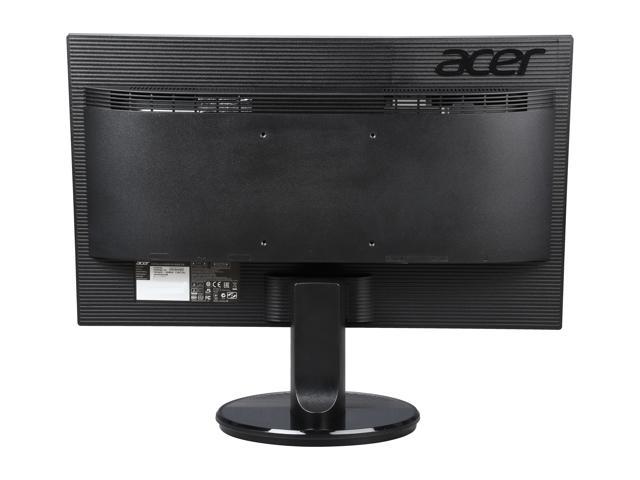 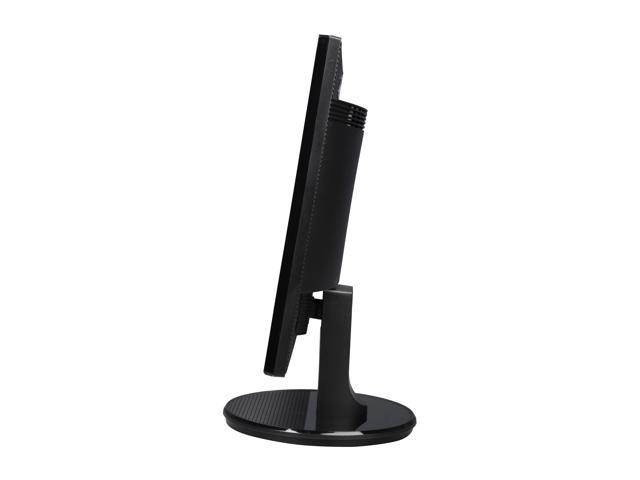 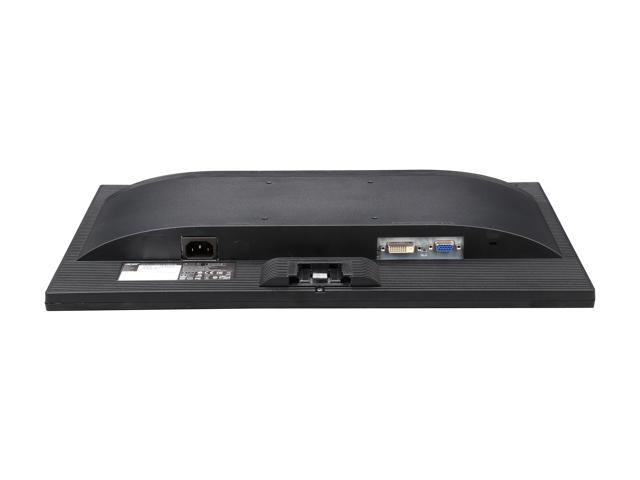 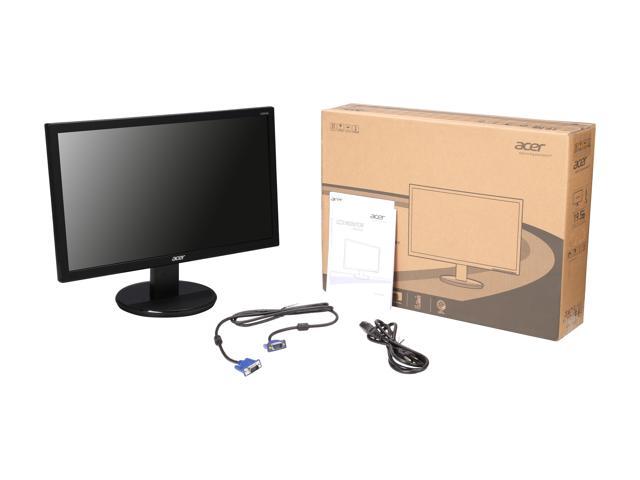 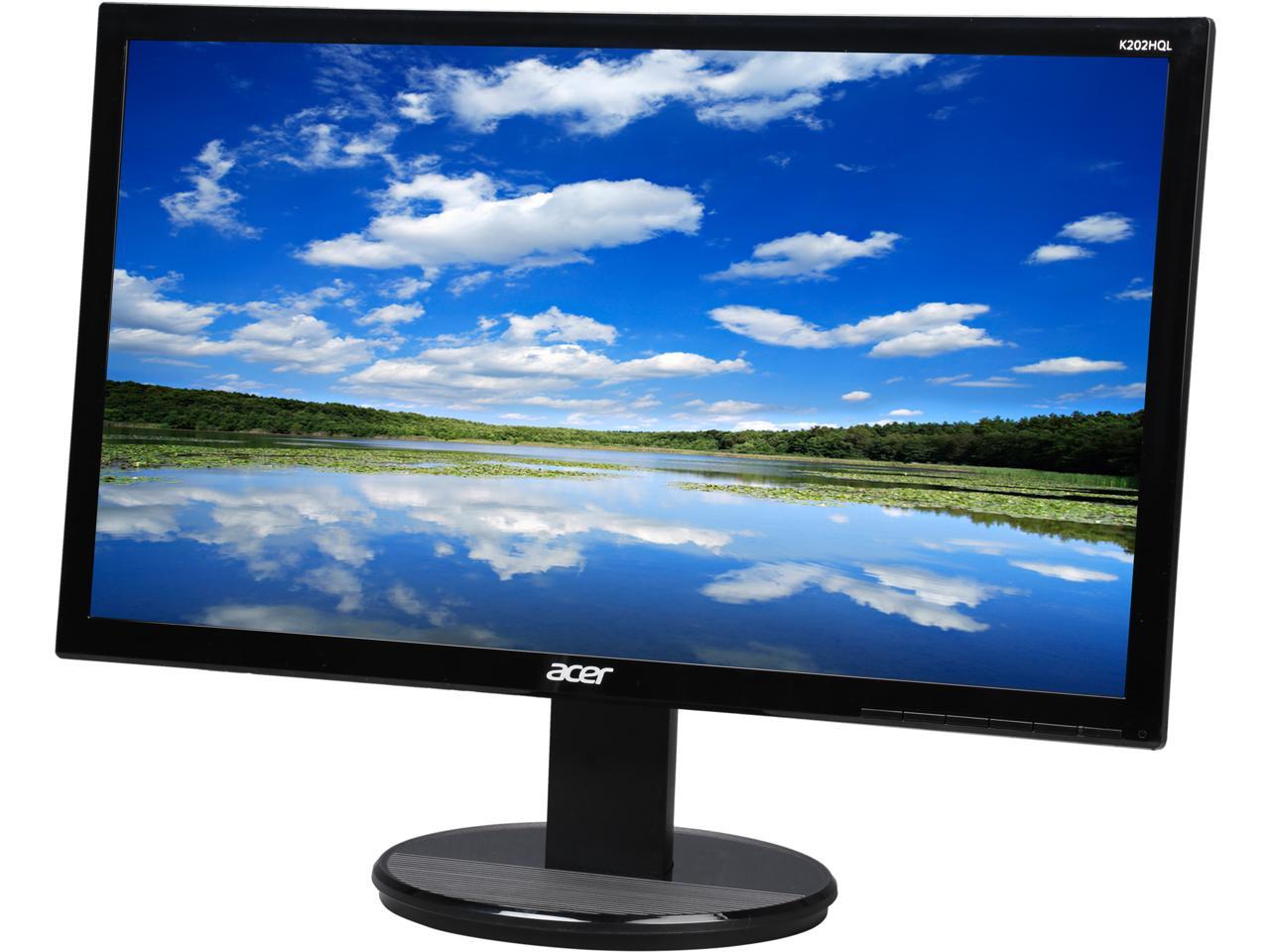 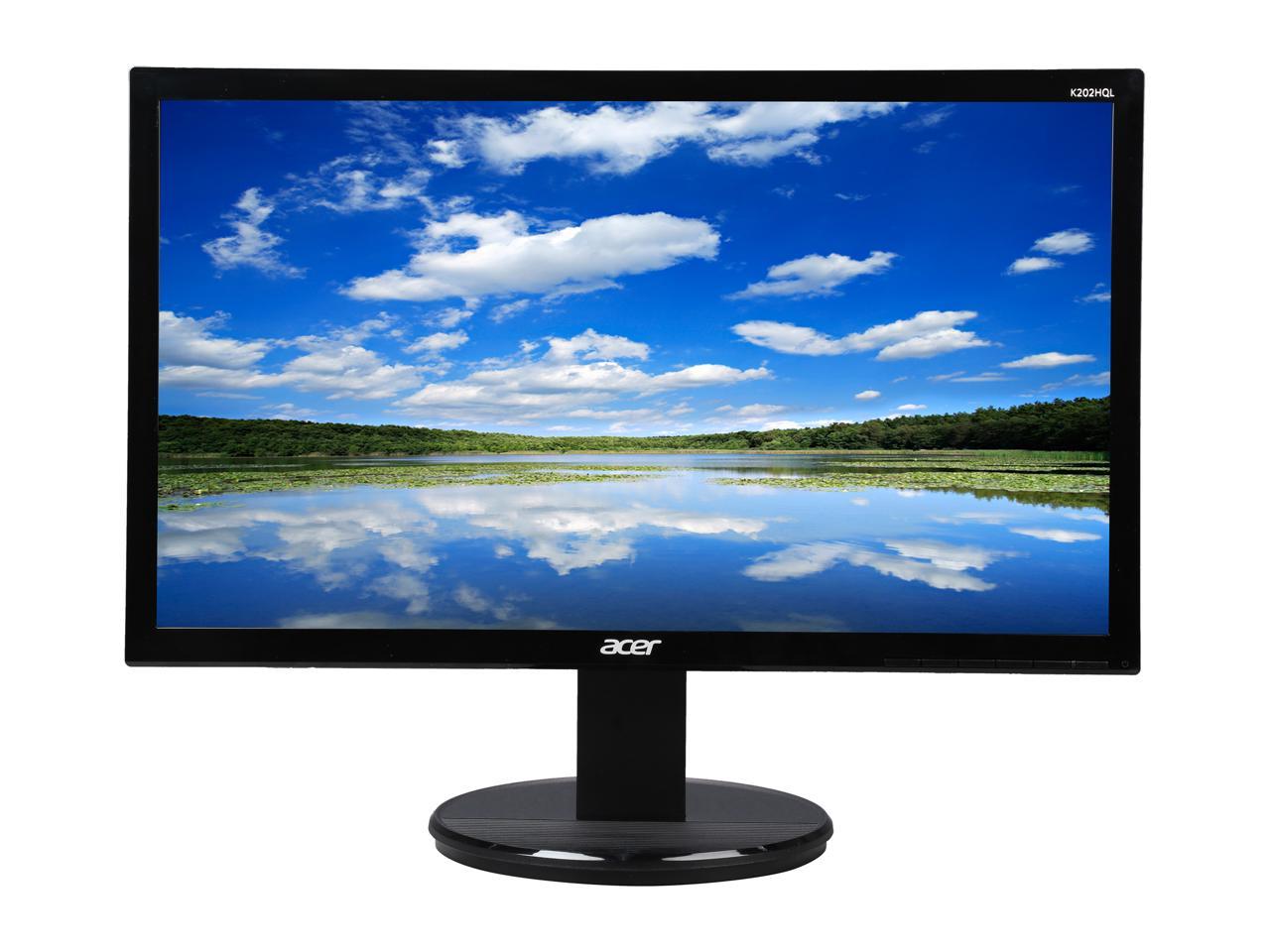 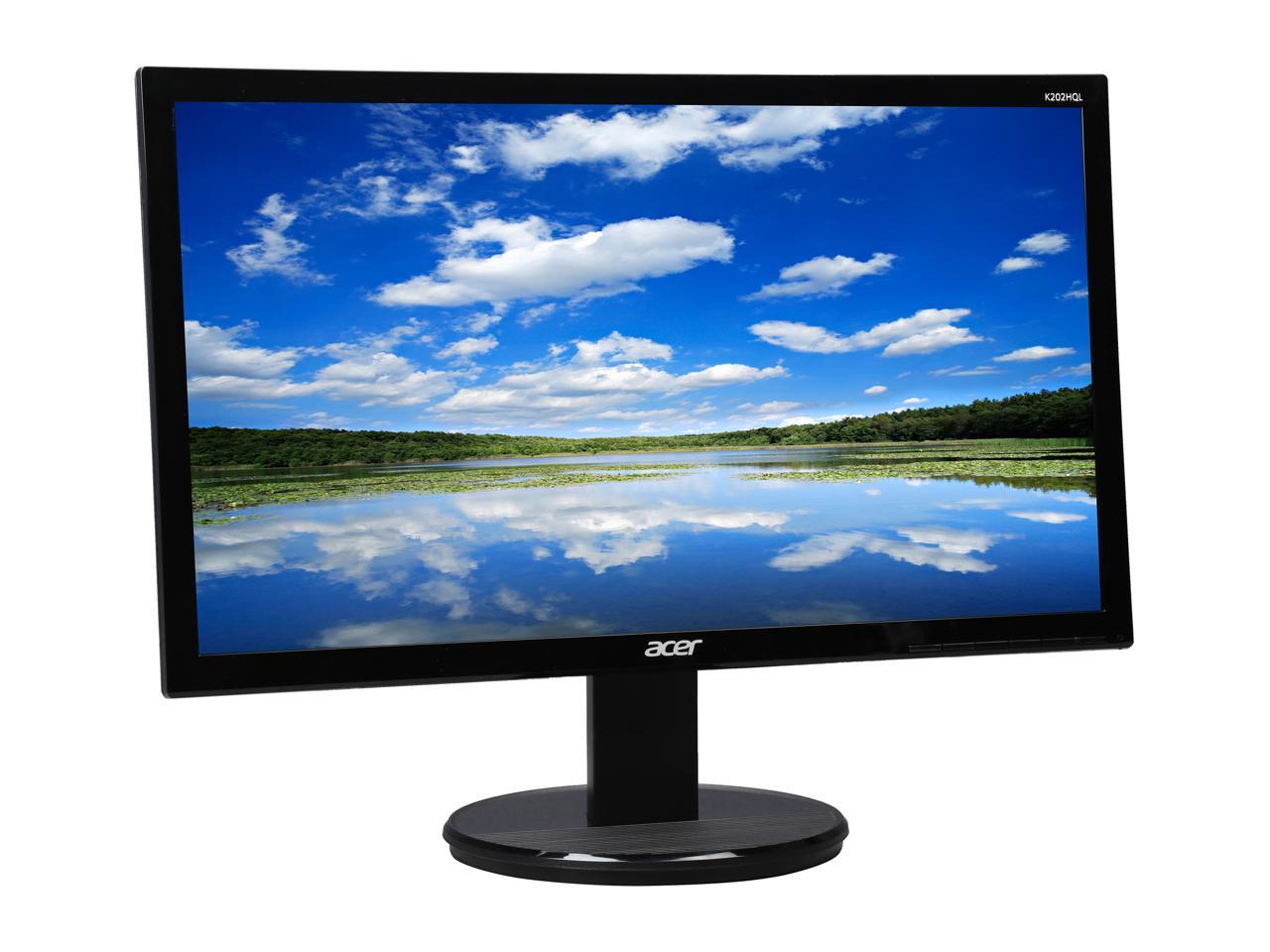 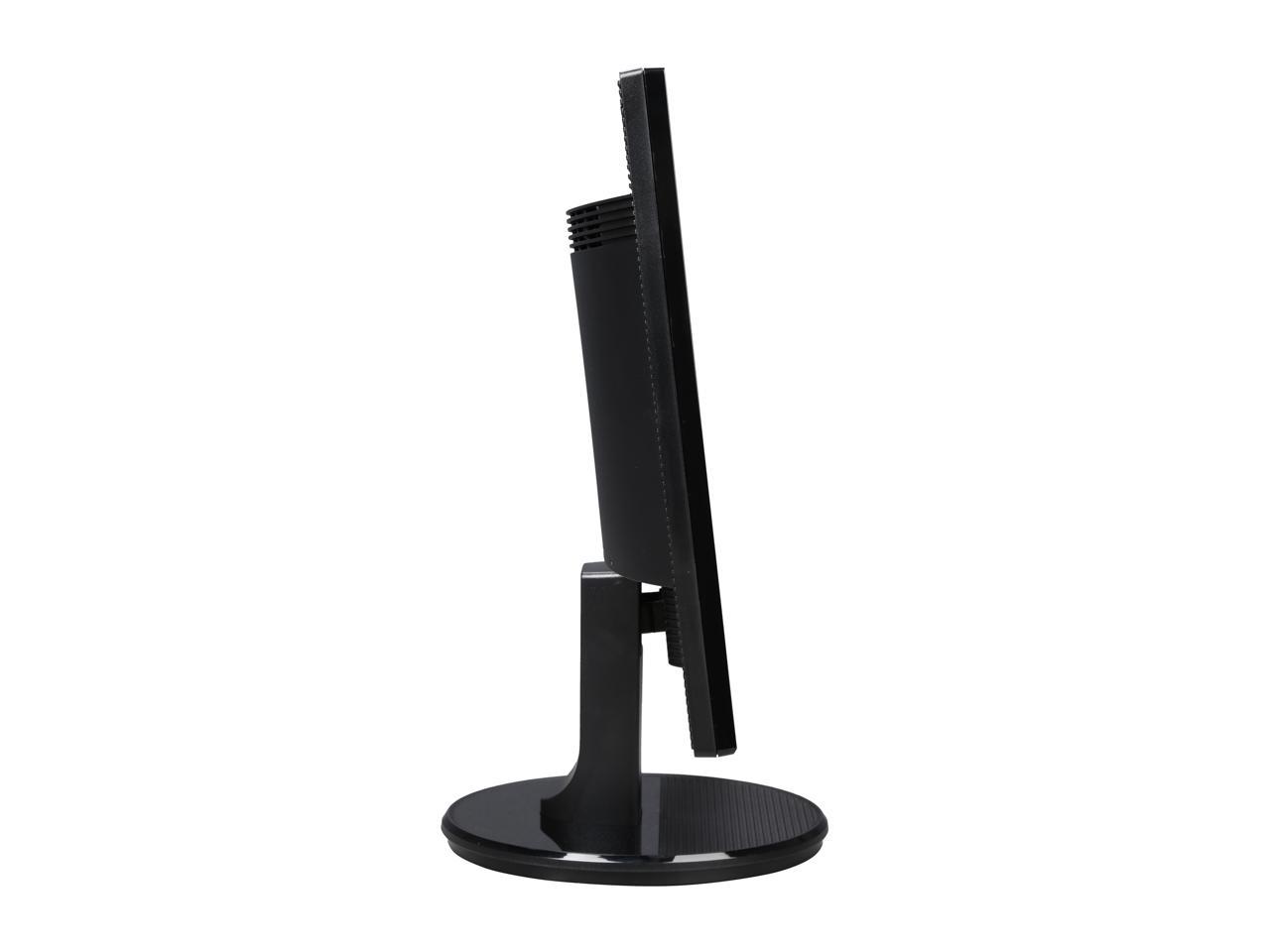 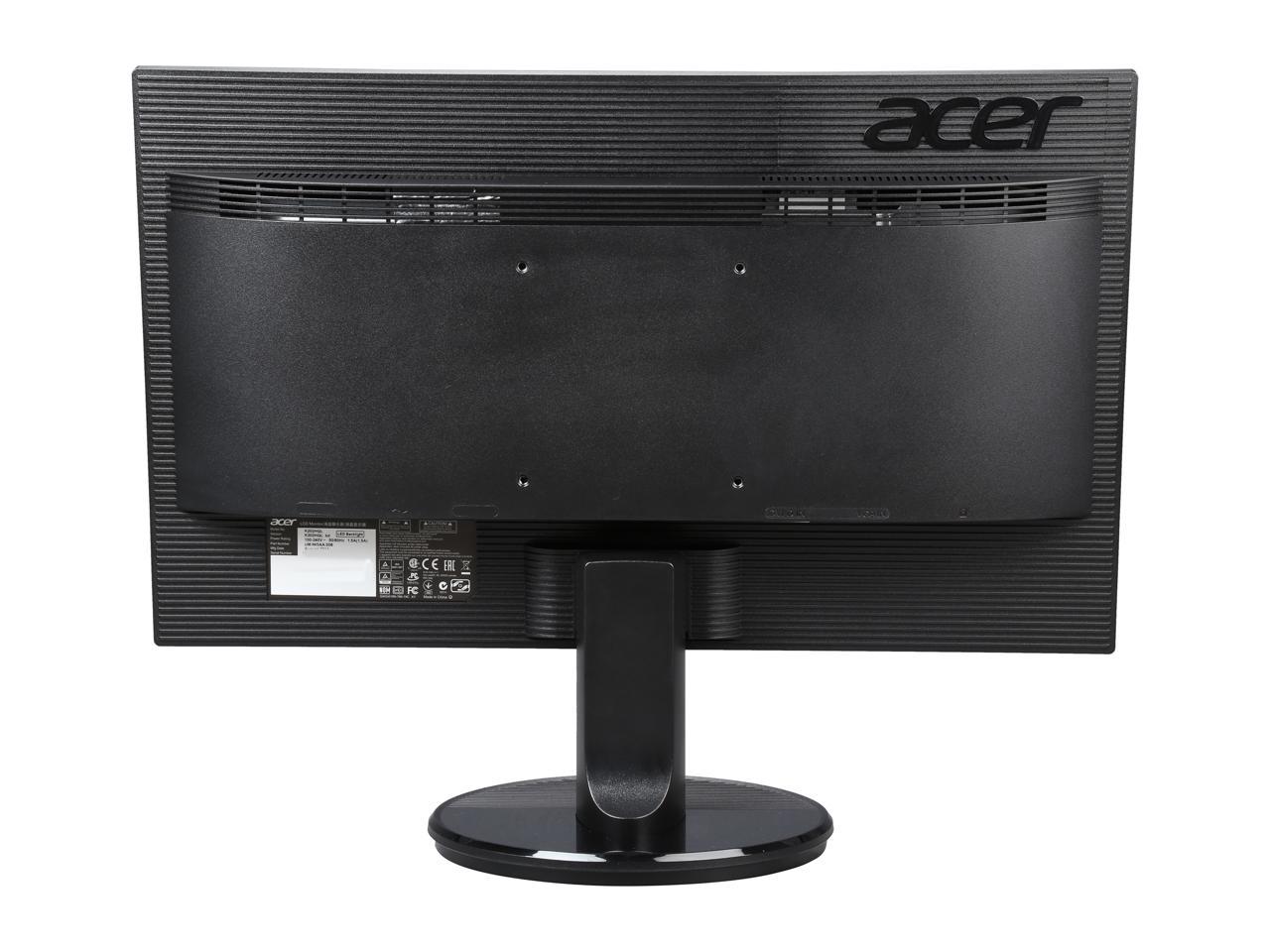 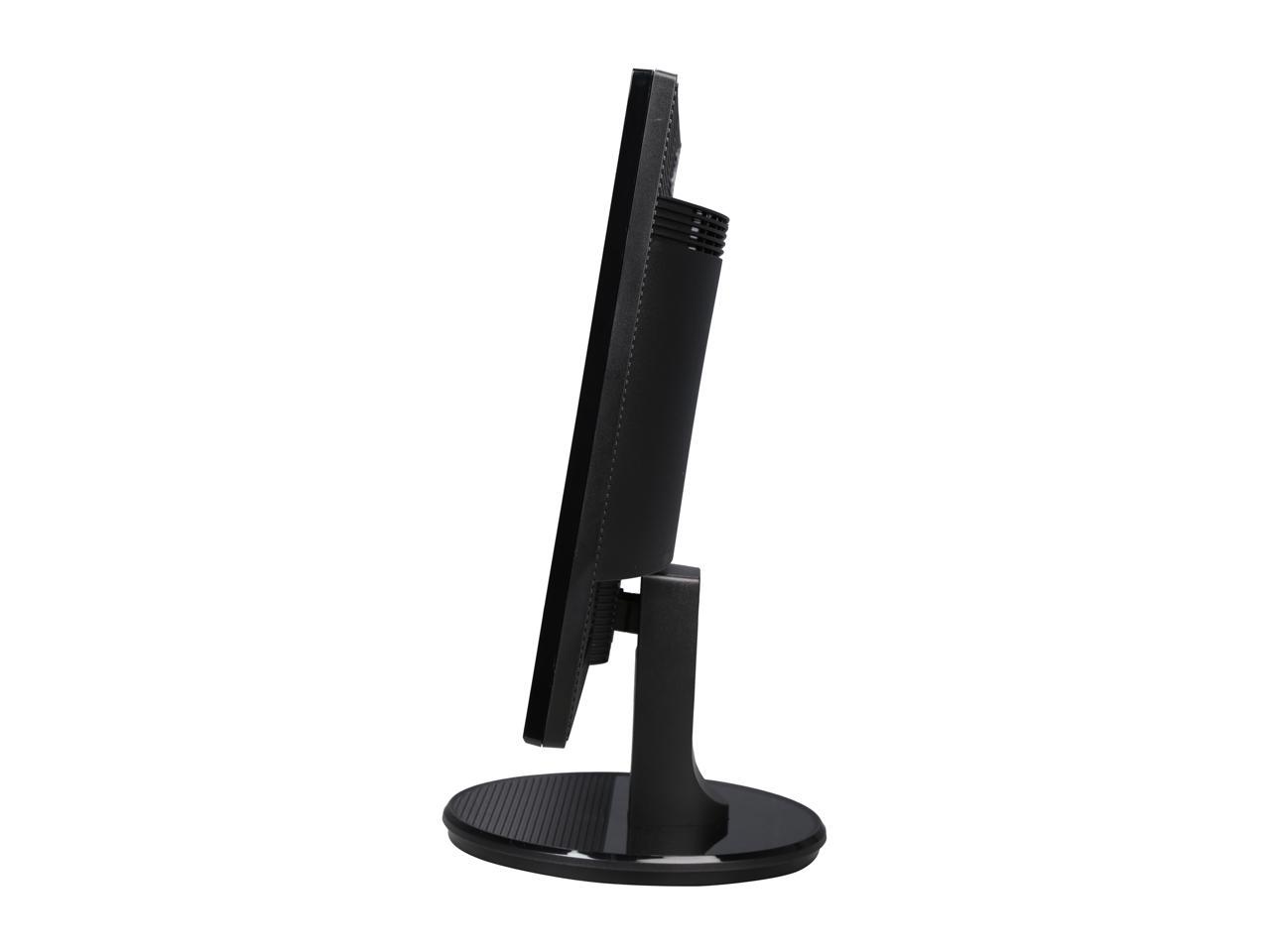 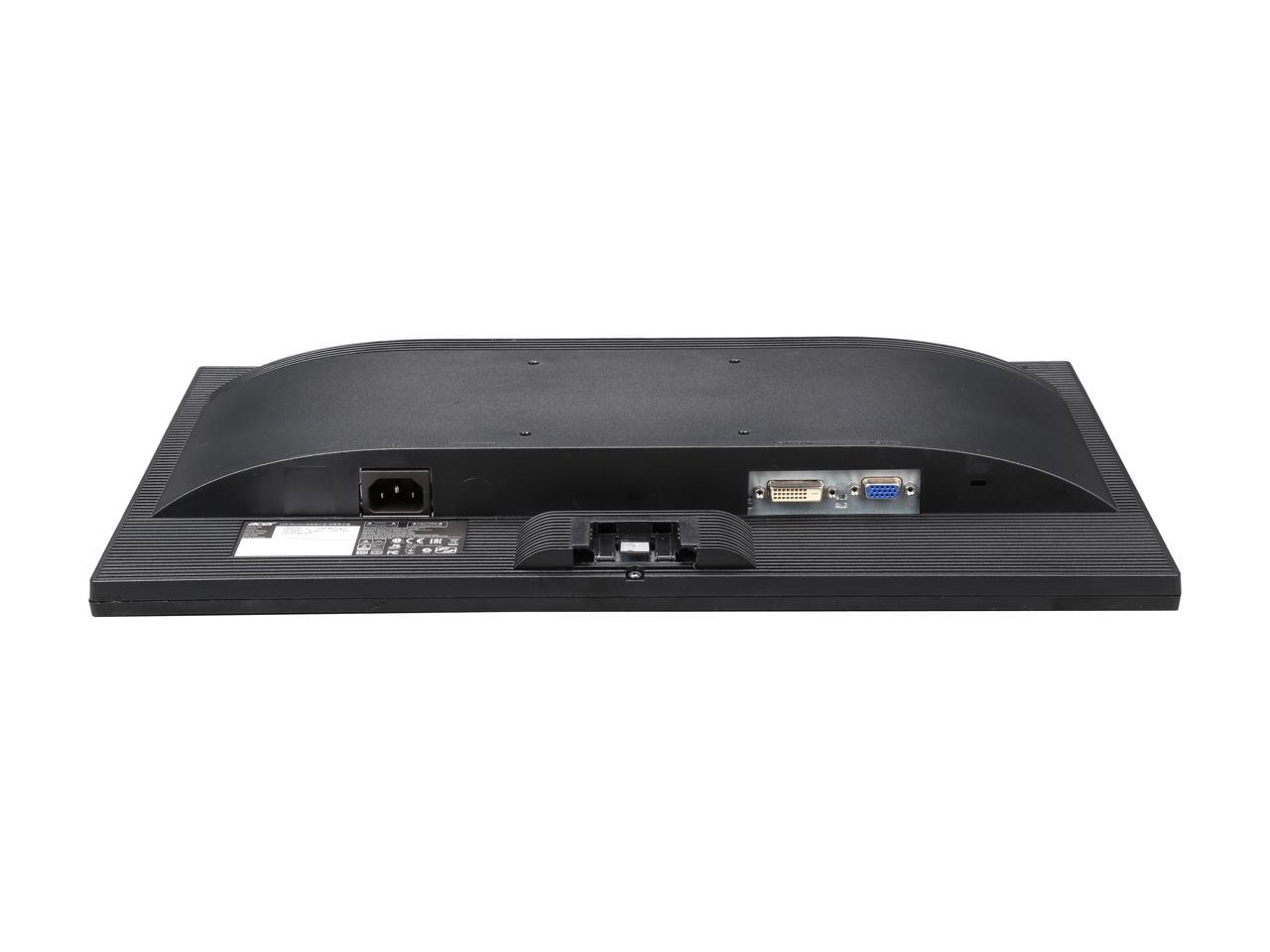 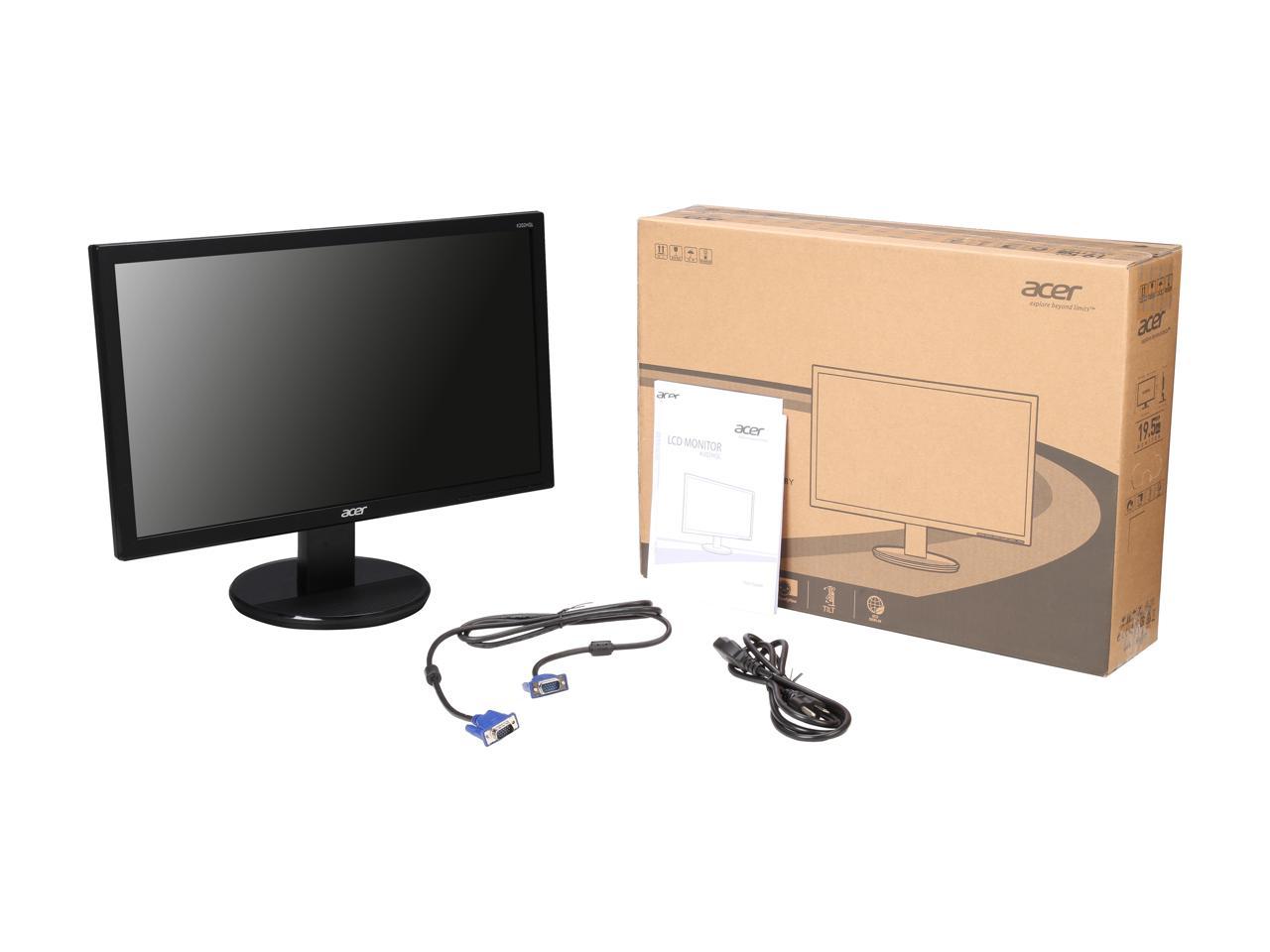 Impressive Visual Performance. Full-featured for Everyone. You'll enjoy tasks and entertainment more on the 19.5" LED-backlit display. It presents incredibly clear, rich-detailed images at a high resolution of 1600 x 900, and features an impressive dynamic contrast ratio of 100,000,000:1 to reveal darker image areas in greater depth. A super-fast 5-millisecond response time displays action sequences with the highest degree of clarity. The great sights are made even better by exceptional colors via Acer Adaptive Contrast Management. Set the display angle to optimize your view with its ergonomic stand that tilts from -5 to 25 degrees. The included VGA and DVI interfaces provide flexibility in connectivity. So whatever devices your employees need to connect today or in the future, this monitor keeps everyone's options open. Pros: - Inexpensive. - Modern-age standard resolution (1600x900). - Very slim for its class. - Very light. - Attractive design, functionality over form. - Basic, easy-to-use settings interface. - The viewing angle is above-par. Colors invert at a 45+ degree angle only from above. Most visibility is retained even from steep angles when viewing from the side, though the brightness diminishes there. - Generally consistent and dependable.

Cons: - Cheap stand. Although, as long as you can refrain from sitting on top of the thing, or swinging it over your head by the cable, it'll last as long as any other. Please don't bully this monitor. - It may be rated for 4k @60Hz, but in no way whatsoever will you ever get close to that. This isn't a 4k monitor. In terms of clarity, It's a 1080p-1440p monitor at best. - Blacks aren't very deep. - Components may run pretty warm during extended use, but it's to no extent that should worry you. You shouldn't expect heat failure. The video staggering is a possibility. - This is relatively few-and-far-between, but the refresh rate does seem a bit stunted at times. At times I've felt that it was chugging in the calculations to output high-res video to the display. You may get dropped frames from the monitor itself from time-to-time. - It only has two inputs - VGA and DVI. Expect to need adapters for modern devices. The DVI port they use is nice, though. It's dual-link spec, so single-link would work here as well.

Overall Review: It seems that other's here are somehow under the illusion that you could buy a modern monitor for ~75 bucks and reasonably expect something comparable to 8k @144+ Hz. This isn't a gaming monitor. It's a light office monitor. This is a very utilitarian product. Expect something on-par with what would arrive alongside a pre-built, home office system c. 2012 ("On-par" in terms of what it's designed for. This monitor is still substantially better than such things). That is to say, decent resolution and color production, but not the most robust nor of apex clarity. Individual pixels are apparent. Blacks aren't very deep. Color calibration/customization is minimal, yet still supplies standard options. Although, colors are life-like and visible clarity still is fairly high for a standard res of 1600x900. Luckily, and surprising even to myself (especially for something so cheap) there is no imposition of that sickly grey or beige overtone. Dark tones keep pretty dark and lights are pretty light. Also, colors really do pop. This thing is great at contrasts.

Pros: The screen size that I received was the exact size that I required for my setup. At the time of my purchase, it was at a lower price than any of the other monitors of the same or larger size.

Cons: There were no cons with the system

Overall Review: What I can recommend is to check on the connections you have in your desktop PC. In my case, I don't have a D-sub connection on my gpu. Fortunately, I have an HDMI/D-Sub adapter to overcome that problem. Problems did not come up during the operation of the monitor. However, I will make the updates on the issues when they appear.

Pros: THE PRICE. Very Bright and clear 1600x900 display. If you put it together correctly, the stand is very sturdy. I used my drill to secure the screws and this thing doesn't. Has auto config and a few different settings such as Movie, Graphics, Eco, etc. Have not had a single problem.

Cons: None really except that there is only DVI and VGA no HDMI.

Overall Review: I was looking for something under $100 and I am still happy with my purchase.

Pros: the price is the #1 seller for me, plus they are way bigger than you think. They are BRIGHT! which is great! all monitors dim after time so this is a huge plus for me. Fast shipping and a great product for the money.

Cons: I wish I could adjust the stand another couple inches in height

Overall Review: after some tweaking in the nvidia control panel i adjusted the contrast and colors and these are very nice to look at.

Pros: Cheap. I picked this up on sale for $80. Person I was buying for did not care about resolution so long as the monitor was inexpensive.

Pros: Cheaper monitors that do exactly as I expected. Just needed them to work and they do.

Cons: None really, definitely nothing fancy about them.

Overall Review: I got them at a good price on sale.

Pros: Monitor was SUPER-Cheap so that eases any dissatisfaction with the device. Displayed images are bright with good resolution when monitor is placed straight-ahead... or slightly below eye-level.

Cons: Viewing becomes difficult when monitor is more than 15 degrees above eye-level. This is exacerbated due to non-adjustability of the stand. Strangely, this off-angle poblem is less pronounced when the viewer is sideways-to or higher-than the monitor.

Overall Review: This monitor is intended for light-duty with my secondary-PC. I intended to place the monitor on a shelf slightly above eye-level and was surprised to see the quick reduction in brightness and clarity. That problem could have been avoided if the monitor-stand simply allowed a downward rotation of the screen. Regardless, the low price makes it difficult to be too critical of this unit.