Purchases from these Sellers are generally covered under our Newegg Marketplace Guarantee.
1,127 Ratings (87% Positive)
Sold and shipped by: 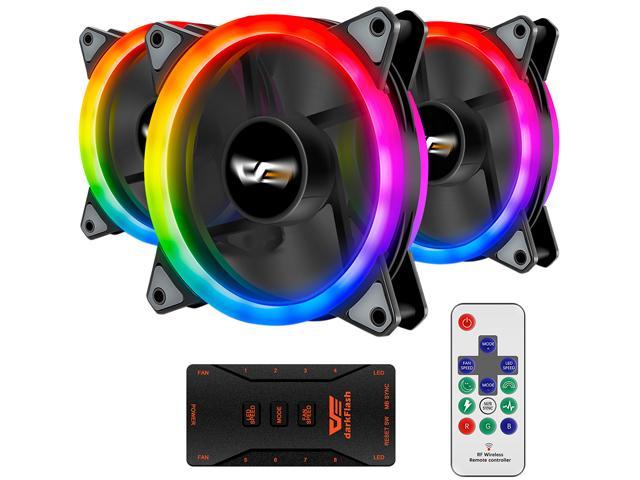 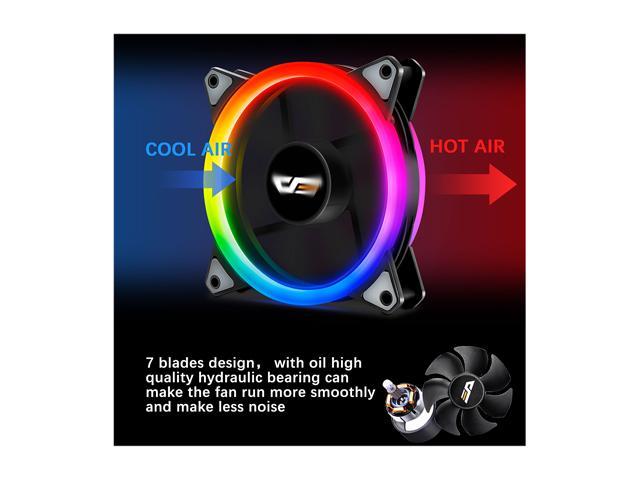 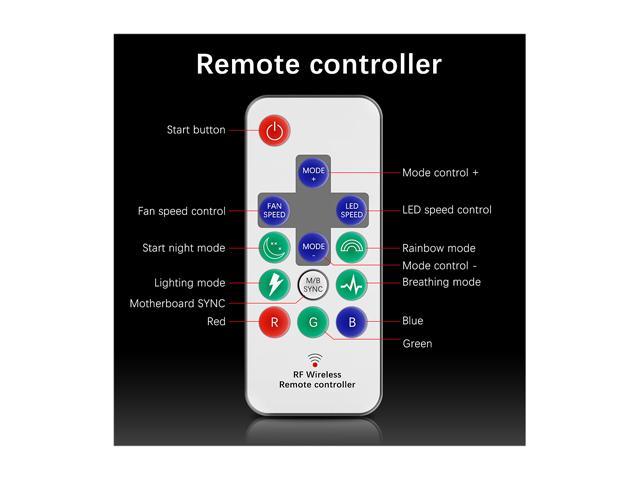 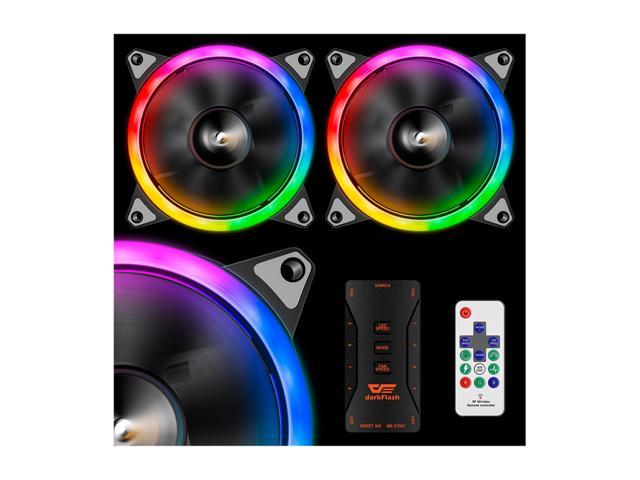 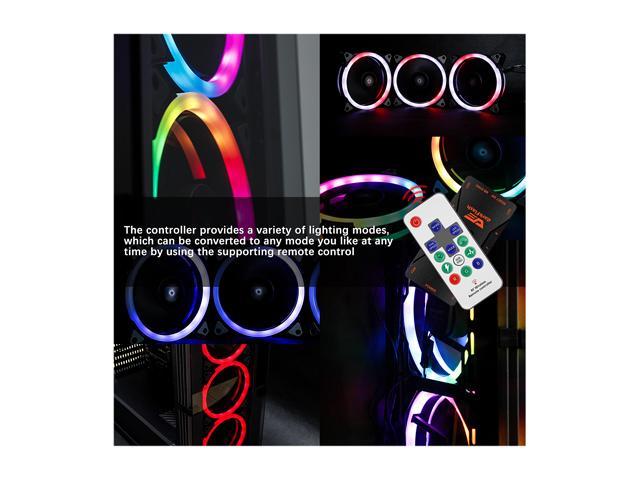 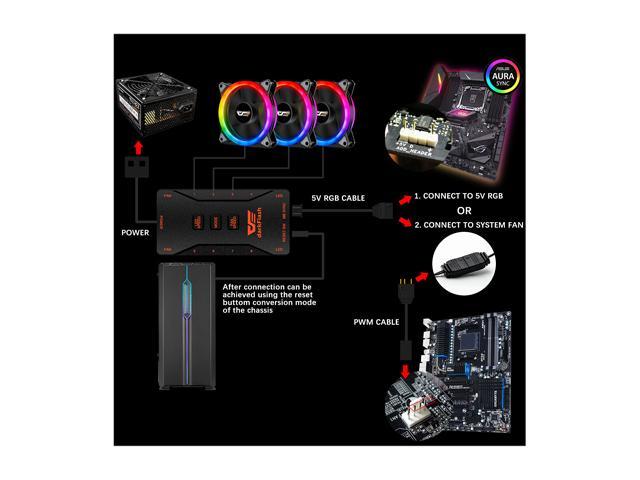 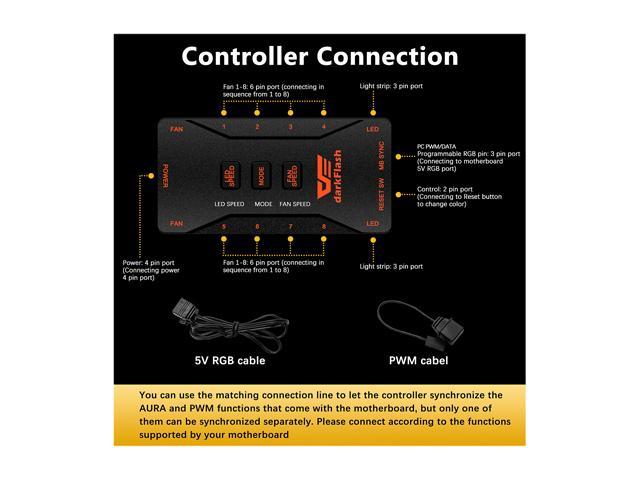 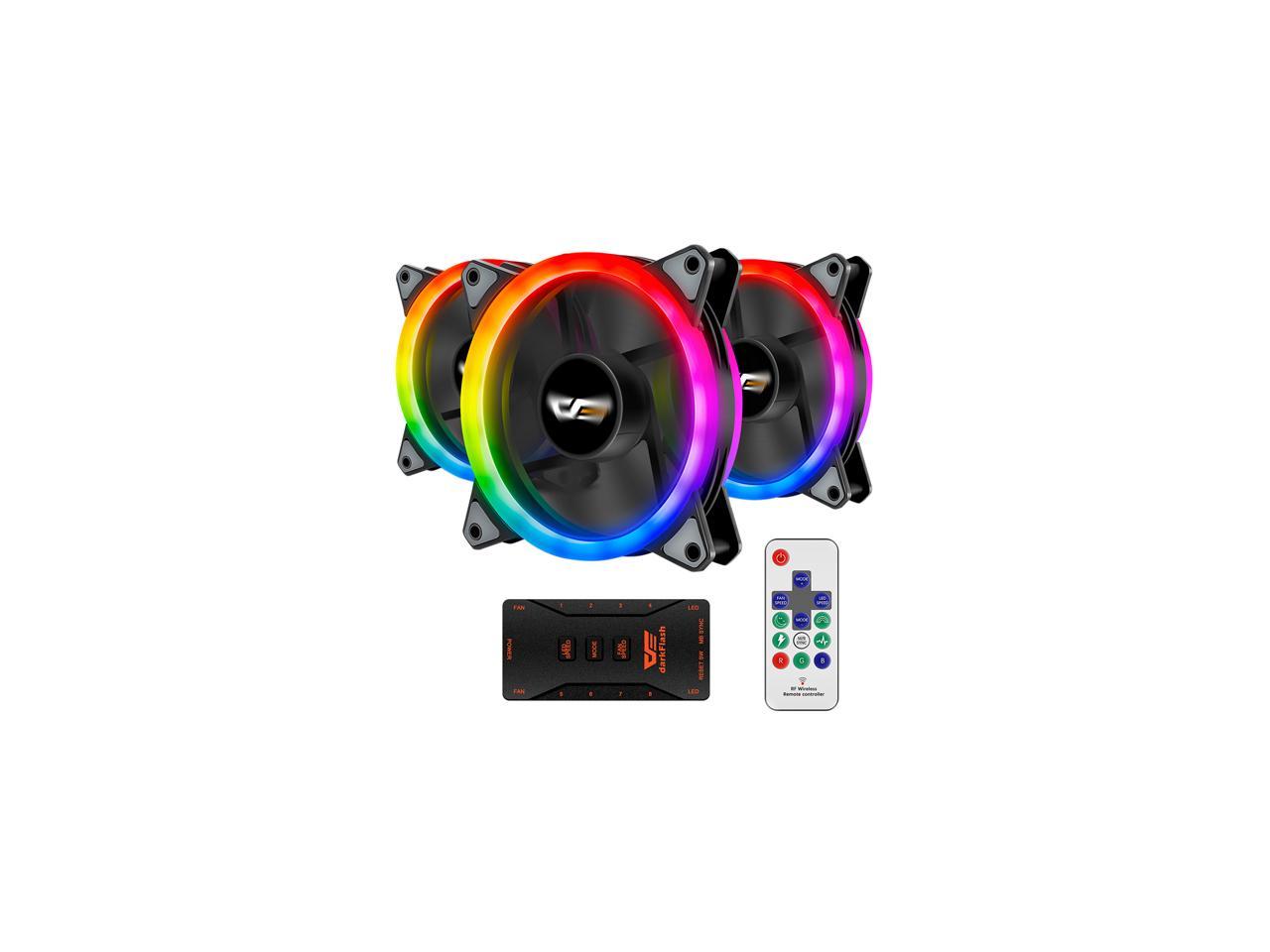 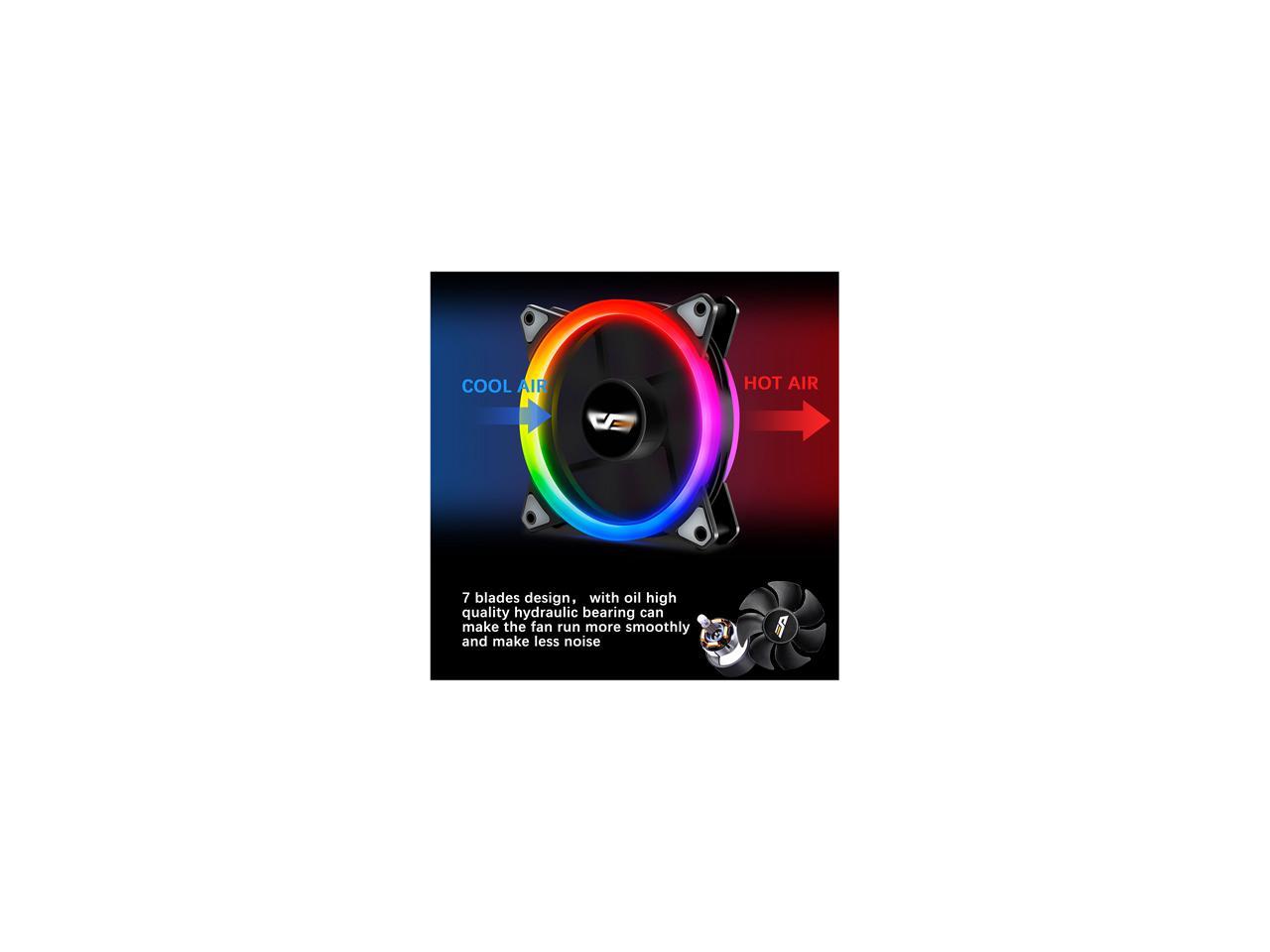 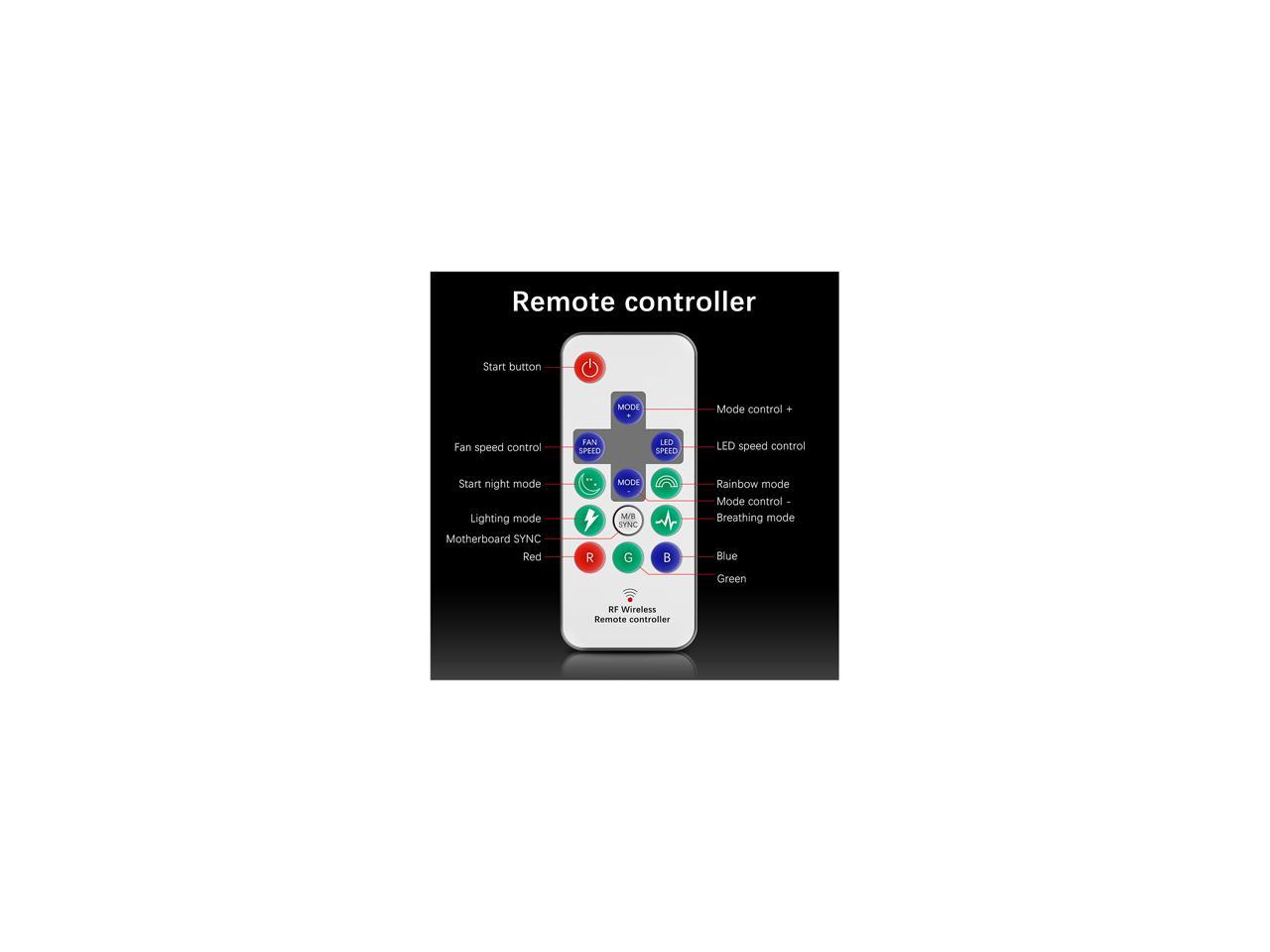 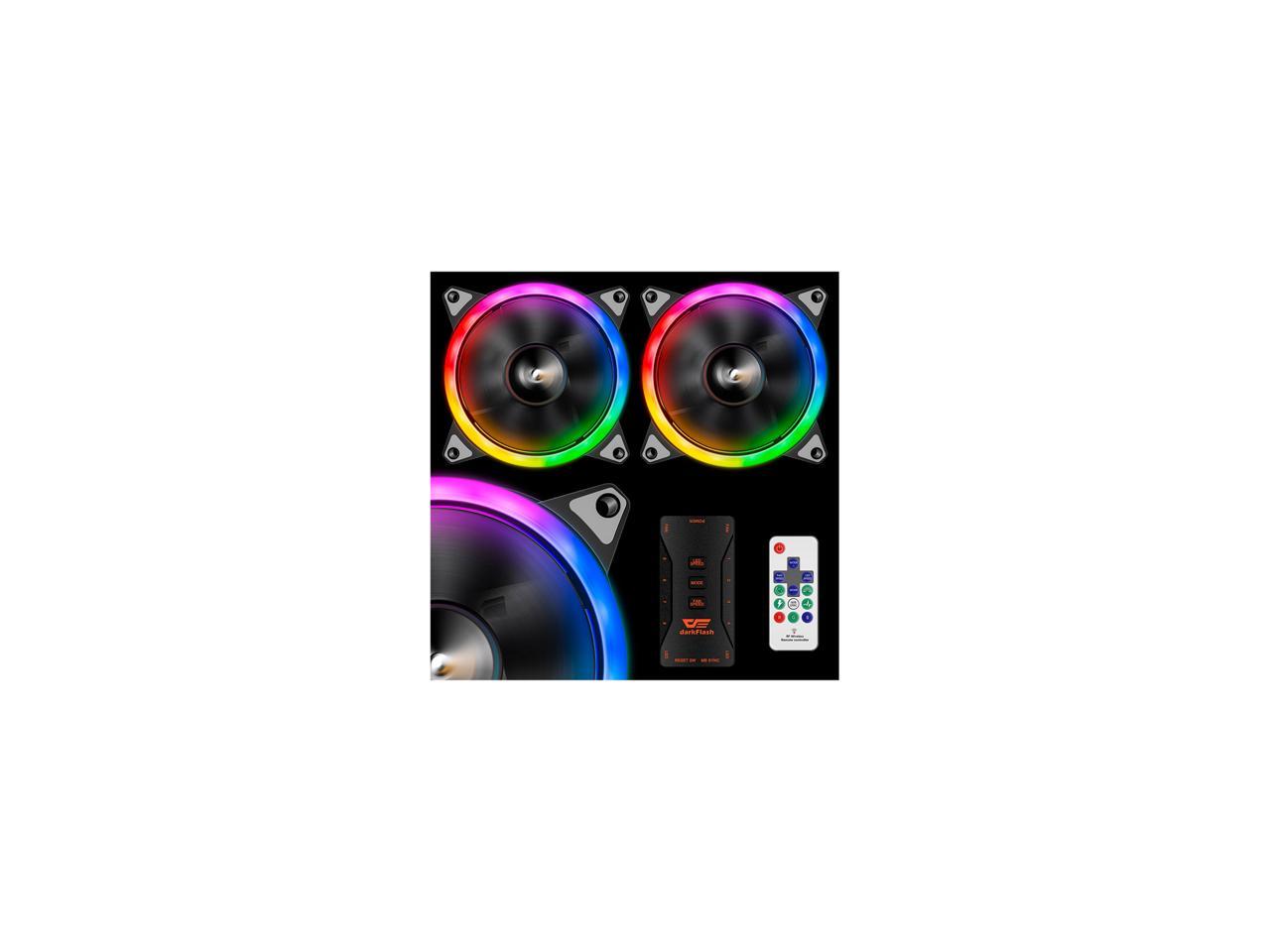 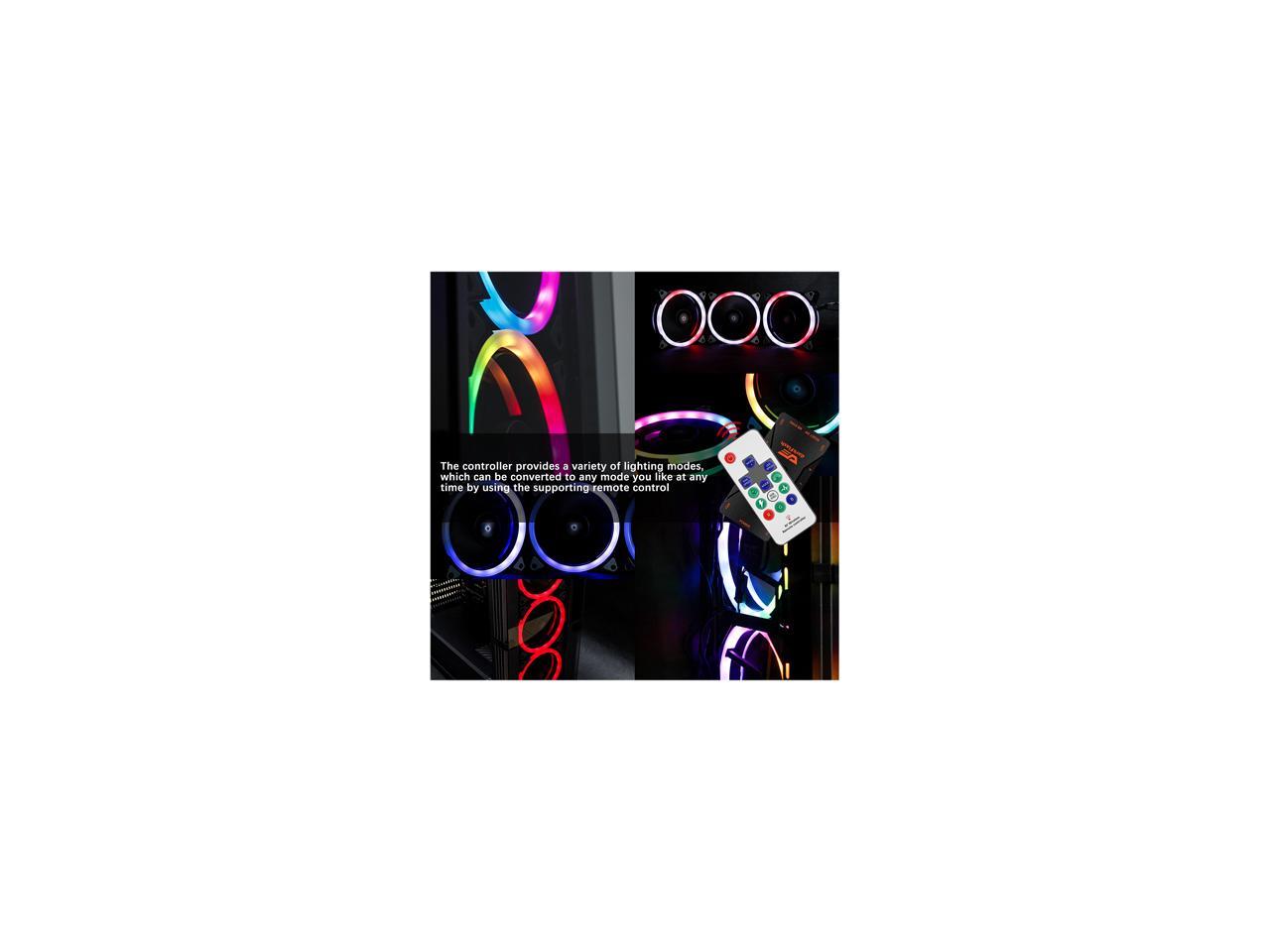 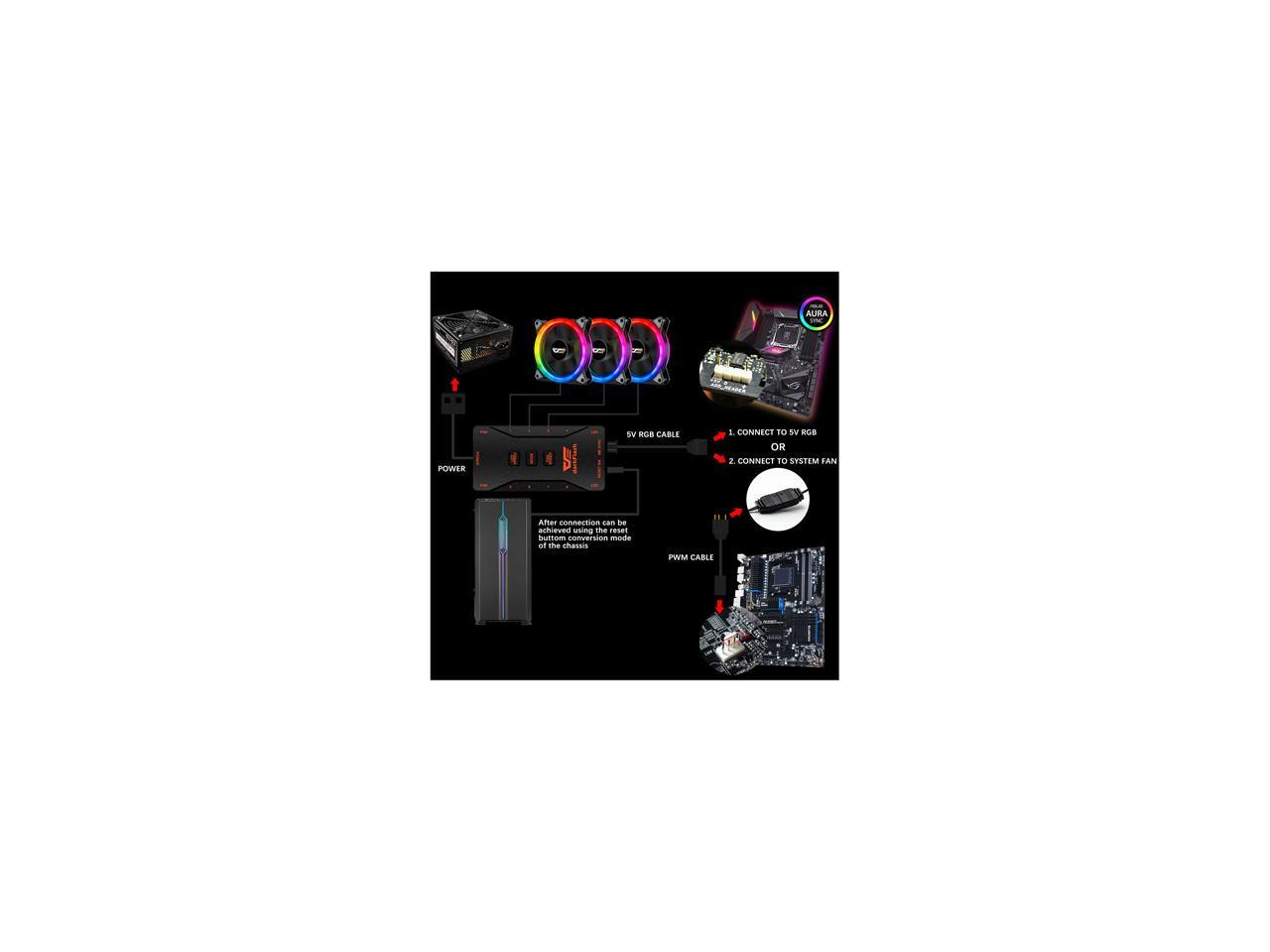 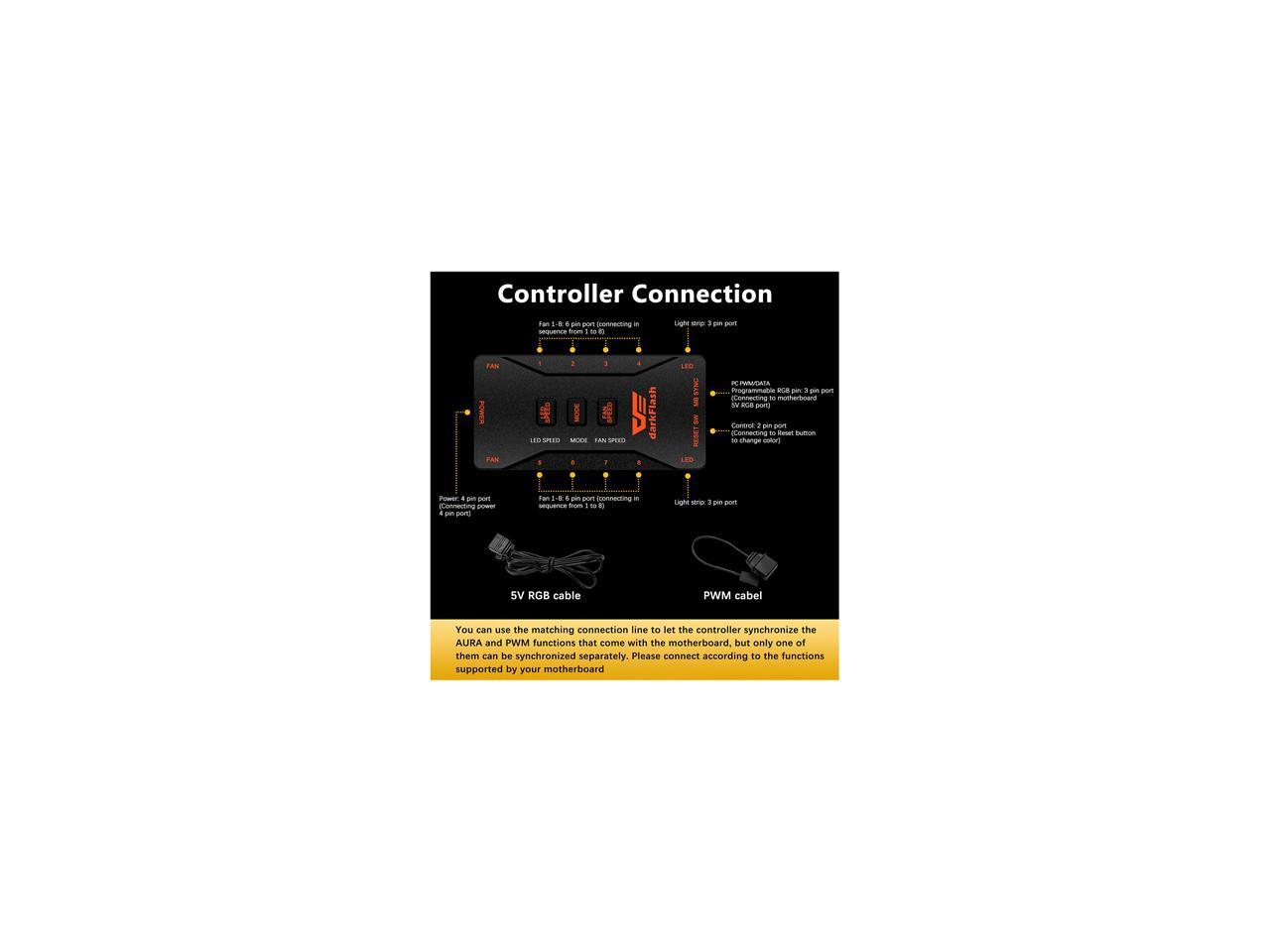 Overall Review: I really wanted to like these fans and as fans they work great. However, I am not able to get the LED's turned on no matter what I do. I've tried configuring the fan connectors in every which way, and I've tried using my cases reset switch and I've gotten no results. All of the videos online are either review demos or in a language I don't understand. And, AIGO customer service, or lack of customer service, is a complete joke. I know that none of this is on newegg, but I am frustrated beyond words with this product. *EDIT FOLLOWING RMA* After my experience detailed above I decided to return the product and exchange it for a new unit knowing full well that I may experience the same thing. However, When I received the replacement fans I was pleasantly surprised to see them light up nice and bright when I tested them out of the box. Installation of the fans themselves and the fan hub was a breeze with the included hardware and adhesive backing. The included remote allows you to cycle through 12 different color presets all of which look incredible for this price point. As listed above, these fans are not capable of individual fan curve settings but, again, at this price point you can't really complain. Expect to pay a premium for Corsair or Noctua units for those types of features. I use 5 of these in my case with 3 set as intake fans in the front and two additional fans on the top and rear set in exhaust and they do a great job of keeping things nice and cool. I can't stress enough how impressed I am with these fans at such an affordable price point. For just about $40 I outfitted my entire build with killer LED case fans! $40 may get you a single Corsair fan. If you are looking to upgrade or are in need of new case fans on a budget look no further. I highly recommend this product despite the bad first impression. Thanks to Newegg for making the RMA process smooth and fast.

Pros: PRICE: These were $27 when I bought them. Three addressable RGB fans and a molex powered controller (don't understand everyone's gripe with molex, personally) for $27 is an absolute steal. FAN QUALITY: I've been reading reviews for ALL the rgb fans in the weeks leading up to purchasing these, and a handful of reviews said these fans felt cheap. I disagree wholeheartedly. These fans have a good, solid feel to them--a heft that typically accompanies a quality product. The box says they are rated for 1200rpm, however the controller DOES have different fanspeed modes. If you're looking for the best air flow, obviously, you should buy a fan MEANT for high airflow. That being said, my Phanteks p350x case moves some considerable air out of it with these three fans all exhausting air. LED QUALITY: Here's where I think these Aigo darkFlash Aurora fans stand out. For $27, I got a beautiful light loop that is probably not too far below the corsair LL120's in quality. The LED's may not diffuse as well, but they show on both sides of the ring--intake and exhaust, and they're vibrant and there are a TON of different modes. COMPATIBILITY: There was a question of whether or not these would work on Gigabyte motherboards--but they DO. Included in the DR12 box is an adaptor for the 5v 3 pin rgb connector and the 3pin VDG end that connects to Gigabyte's motherboards. I have the Gigabyte x470 Aorus Ultra Gaming, and to connect these to RGB Fusion all you do is plug in the adapter, attach it to your motherboard and hit M/B SYNC on the controller. NOISE: In terms of raw numbers, I have a decibel meter app on my phone and sitting on my computer tower with the fans on LOW, the meter reads an average of 30db. On HIGH, the decibel meter reads an average of 44db. Take that for what you will. With the fans being the only thing in the room, they're putting out less white noise than an oscillating room fan running several feet away from you. Personally, I find them nice and quiet for fans running at a constant 1200rpm at HIGH. TEMPS: Don't expect these to be amazing temperature droppers. They're 1200rpm fans, and they're not meant for high volumes of air movement. That being said, they're keeping MY system nice and cool in tandem with two ARCTIC F12 fans in the front pulling air in and all three RGB fans on exhaust. I'm not gonna give any raw temp numbers, because temperatures at idle and load will depend entirely on your computer's component setup. What cpu you have, cpu cooler, the fans on your gpu, they all play a role in internal case temperatures.

Cons: In no particular order: After an hour or so running, one of my fans has developed the wee slightest clicking noise--it's almost imperceptible, but I was able to figure out which fan it was without needing to turn them off and test them individually, so it's definitely there. It's not loud or quite annoying enough to knock an egg off, because again, these fans were $27. If it gets worse, I may update my review and knock off an egg for it. I have no real other complaints. At the time of writing this review, I've had these fans running for maybe 2 hours, so if things change, expect a followup I guess!

Overall Review: I am absolutely recommending these fans. If you're new to building your own PC's as I am, or simply don't want to shell out the ridiculous cost for Corsair's LL120's or Thermaltakes Riing Plus/Triio (seriously Corsair/TT, rgb LED's aren't THAT expensive and the fans aren't even THAT great performing and your respective RGB software certainly isn't worth that money) then aigo's darkFlash DR12 fans are the way to go.

Pros: -Easy to install. If only I had the right power cables it wouldn't have taken me three days, but they survived being removed and reinstalled three times. Took me 10 minutes when I had the right cables -Looks great. Plenty of modes to choose from and the halos look cool -Low price. That's always nice

Cons: There was a pin that came bent in the box on one of the cables, and when I tried bending it back into place it snapped off. Partially my fault, but it still ended up working after I applied a dab of superglue and plugged it in. Still, I wish it wasn't bent to begin with.

Pros: The dual sided LED makes it look amazing in a case where both sides of the fan are visible. Pretty quiet and slightly above average airflow compared to other fans in this price point. Very very cheap for RGB fans. I paid 21 for a set of 3 so that is only 7 dollars per fan. Fans have rubber on the ends to reduce noise. I feel like you'd almost never see that on anything below like a 10 dollar fan.

Cons: Can not sync with things like Asus, Gigabyte, MSI light things, or I couldn't figure out how to do it. Must plug fans into the controller in sequential order for the RGB lights to work. Fans will spin regardless of what order they are plugged into. This is stated in the manual it comes with but I noticed a few reviews who had this problem. Cables are a little short on the fans so you have to pick a good location for the controller if you're trying to connect more than 3 fans.

Overall Review: Of course there are better looking RGB fans out there with better airflow, but all those fans would have cost like three, sometimes even four times the price. For what I paid, I really wasn't expecting much but I felt like I definitely got a good/decent product.

Cons: No AURA sync capabilities but I knew that at this price.

Overall Review: I have bought about 7 sets of these so far and only had one DOA. Aigo sent me a replacement and i'm good. QA could be a little bit better but for the price I can't find a better value.

Cons: -doesnt move a lot of air even at high rpms

Pros: Lowered my Temps of both my GPU and CPU substantially, I was getting around 60c idle on my 2070 after installing these it idles around 45c and under load only reaches about 60c. I've seen a bunch of reviews saying these weren't that great for cooling but they seems to be working just fine. They're also not nearly as loud as everyone made them out to be even at the highest fan speed I can hardly tell there on. They have a bunch of RGB options. the Rainbow setting is probably my favorite. My mobo doesn't have an RGB header so the included controller was great, Other than trying to find a place to hide it.

Cons: Hard to hide the controller in my case.

Pros: Excellent starter kit with fans that compare in power to most stock fan options. Reasonably priced and loaded with functionality. Compatible with not only ASUS Aura Sync but now confirmed to work well with Asrock's Polychrome RGB system. Not surprising but the more you know! Even without having an RGB enabled mobo with the addressable headers this system still does a great job for the cost. The added remote control and powered fan hub allow for a wide range of colored modes with good effect. Shock absorbing system on the fans is a nice added feature. Easy setup depending on the case and even easier to get running once installed. No dead lights or anything like that. Fan hub even came with the option to add on a couple light strips for added color.

Cons: One of the fans once powered up didn't want to spin until I gave it a manual kickstart by hand. Worked fine after that and instilled within me the feeling of starting a rainbow powered ancient aircraft. Goofy but it's still kicking. That could say something about the bearing system involved but at the cost it might as well not be an issue.

Overall Review: Got two of these for a twin machine setup because the price point and functionality. Good buy on sale for just under $30!