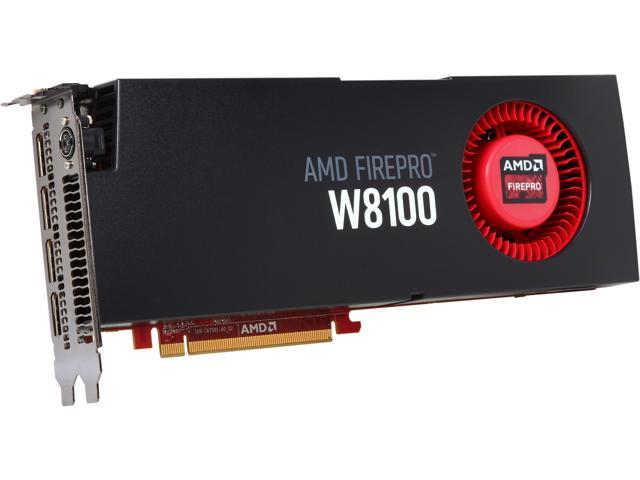 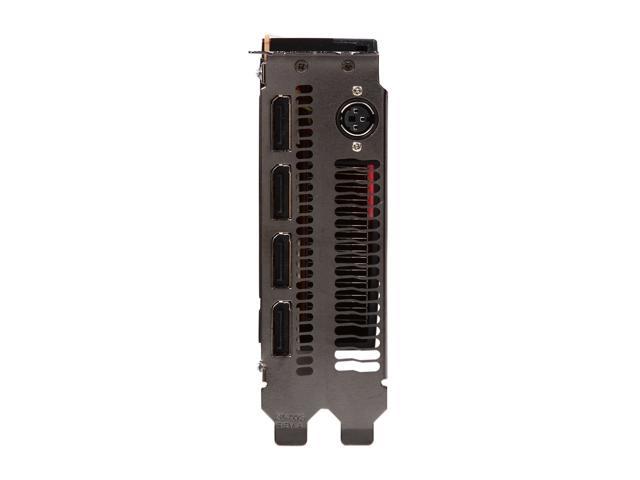 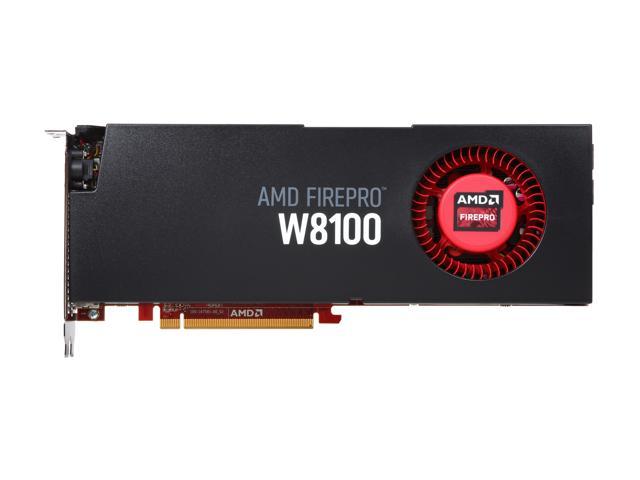 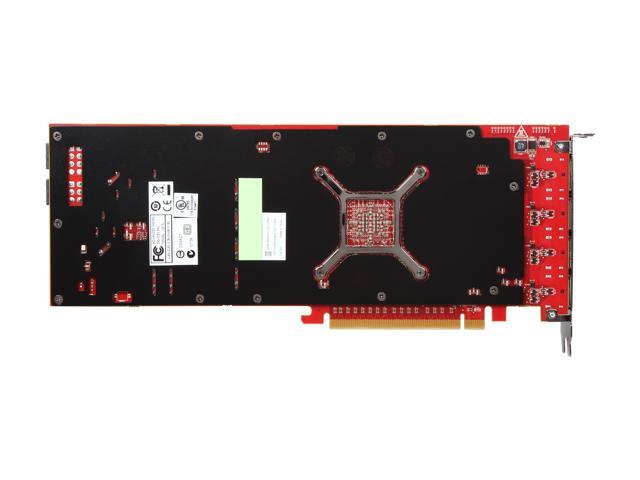 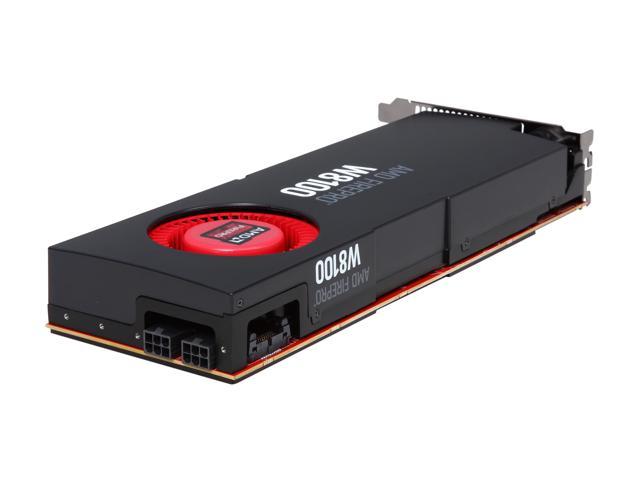 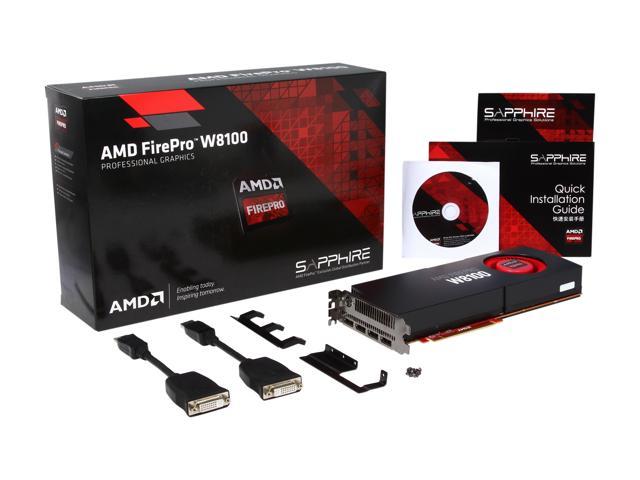 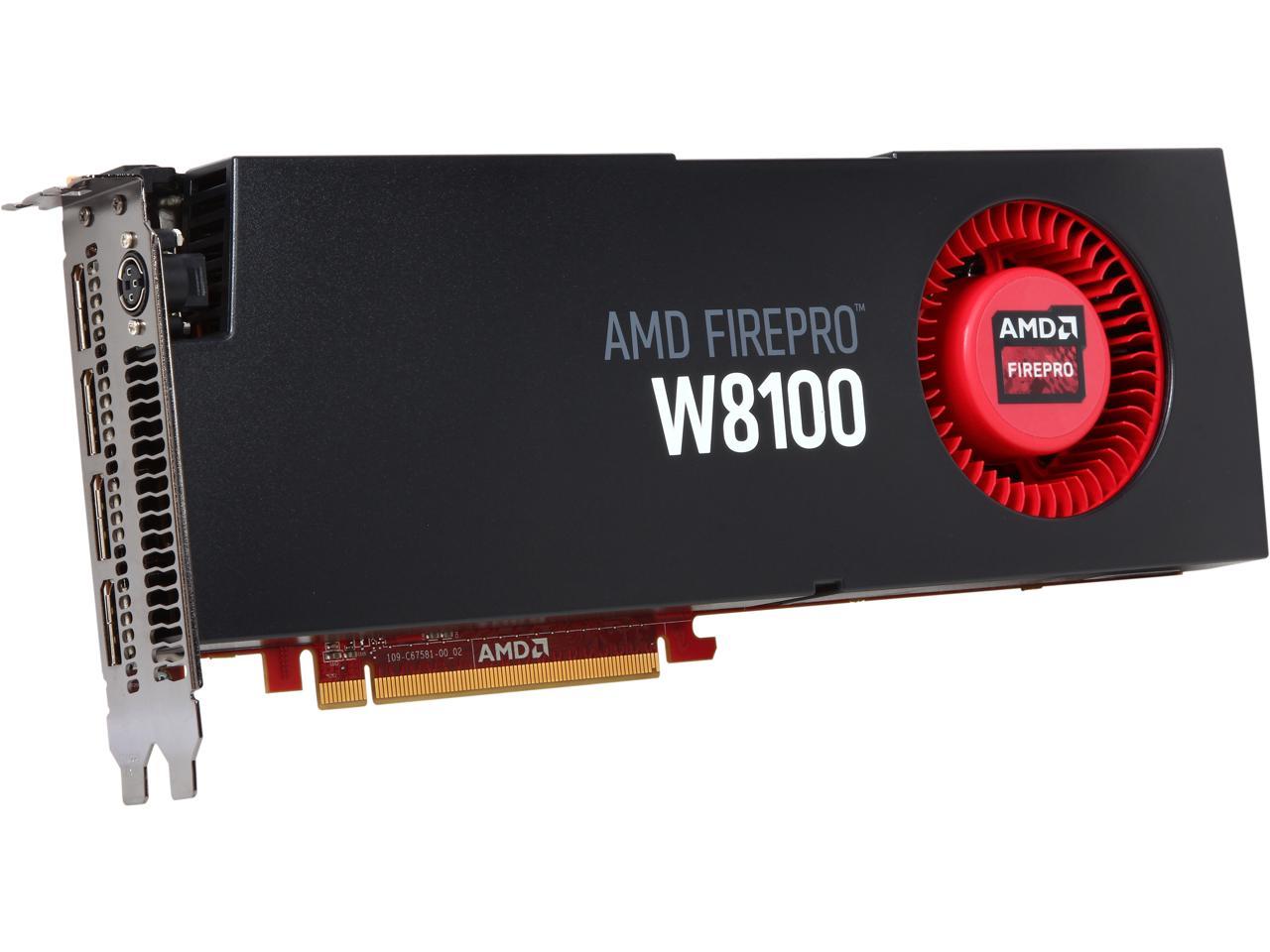 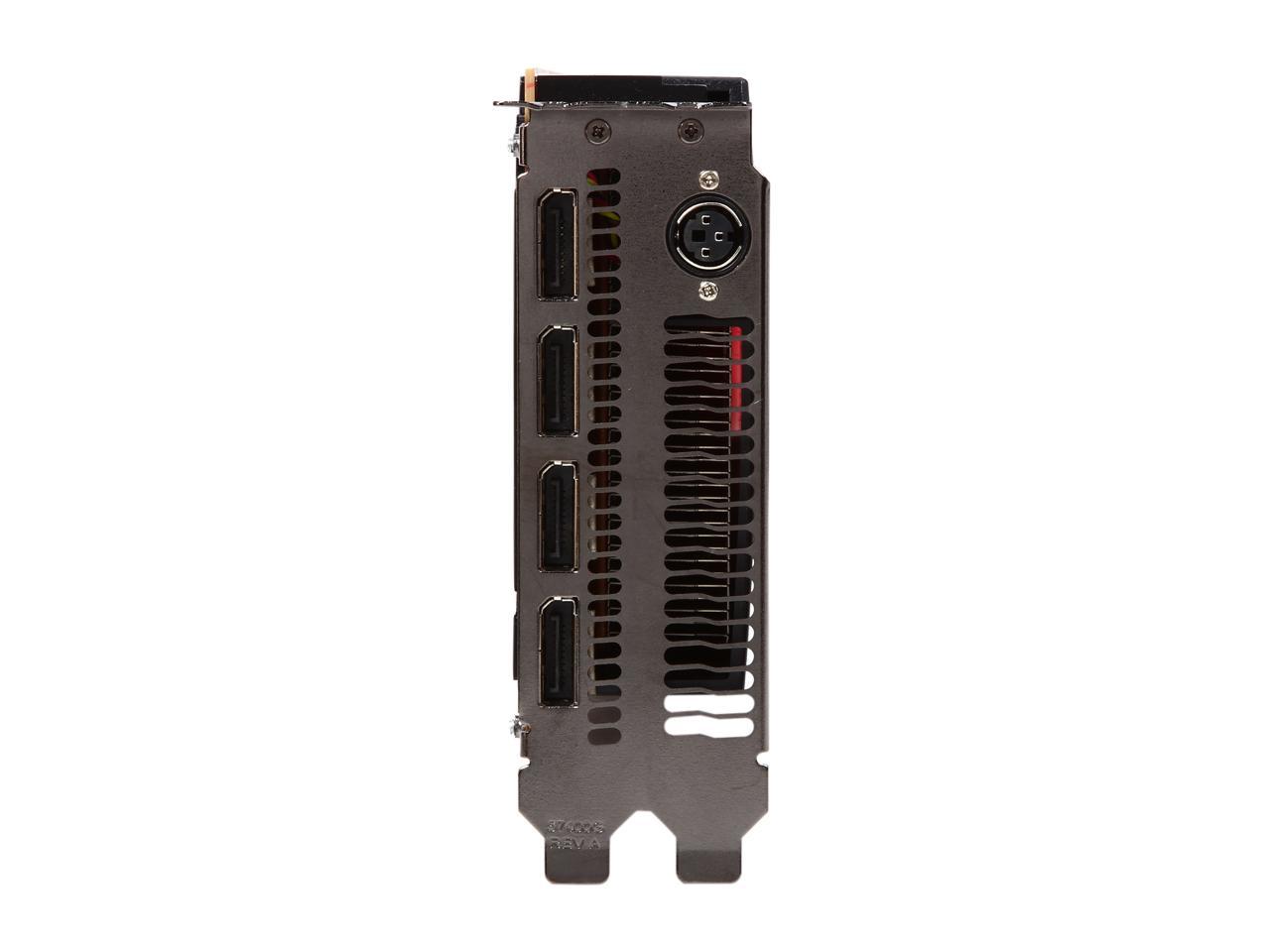 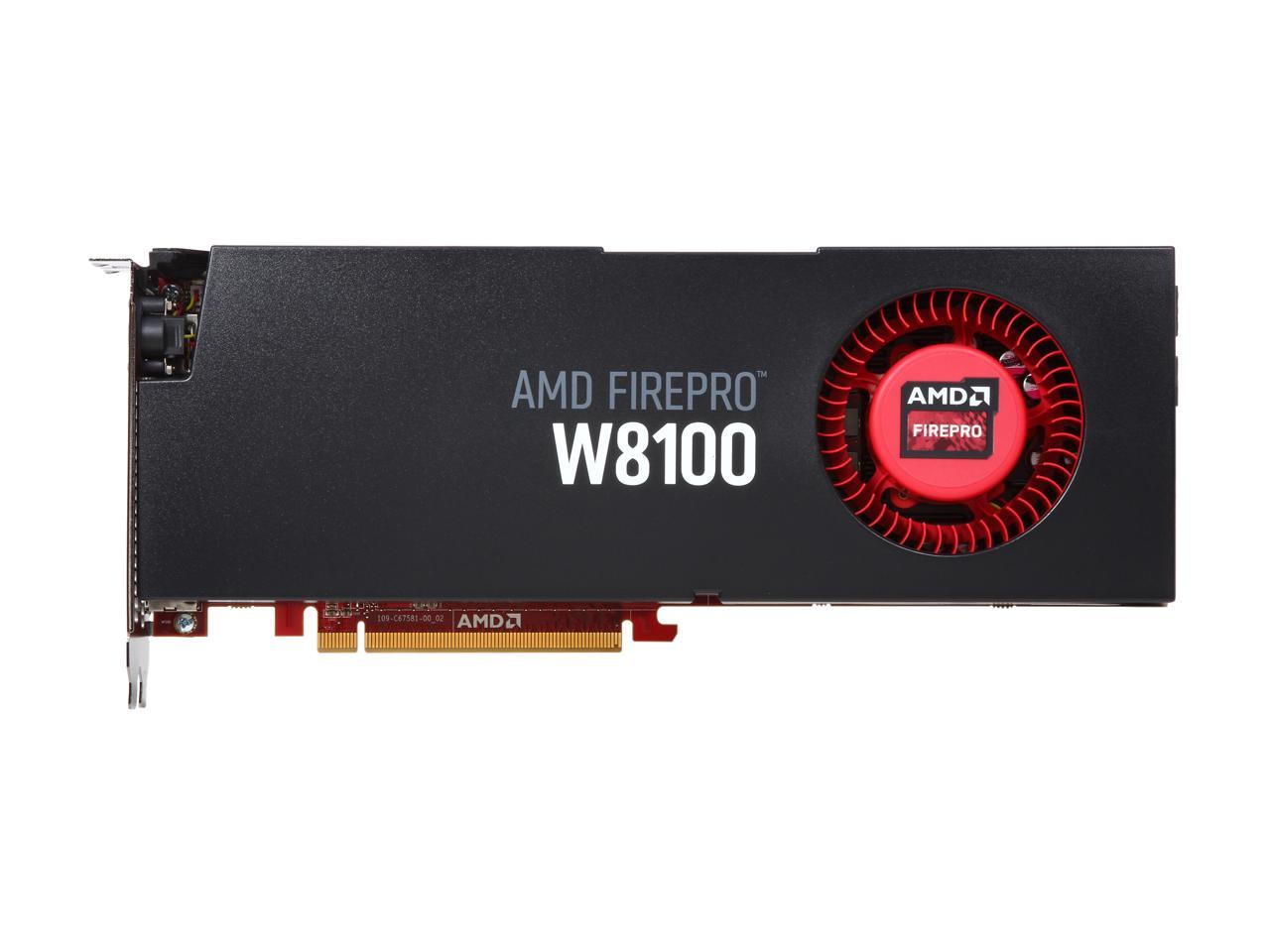 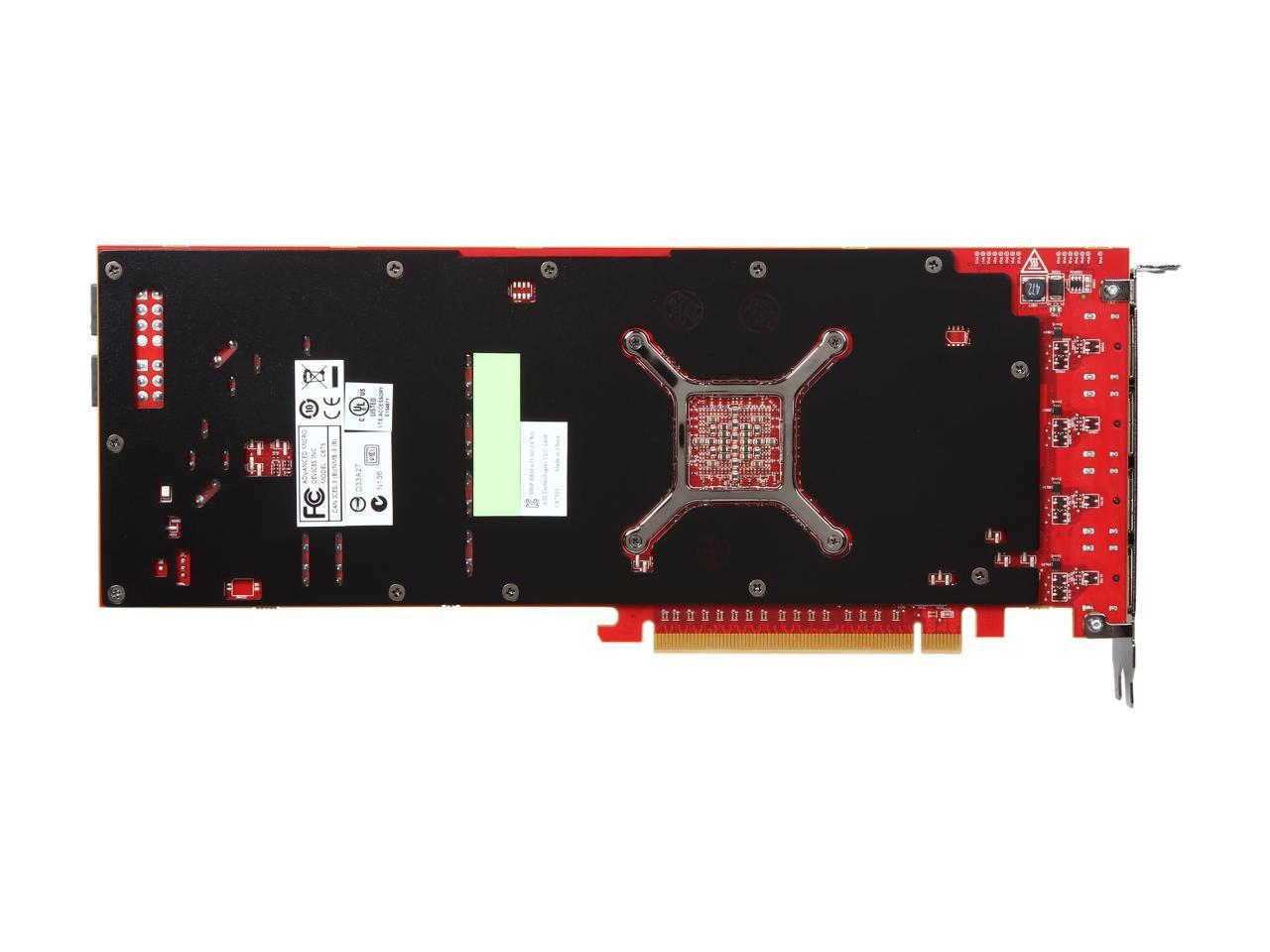 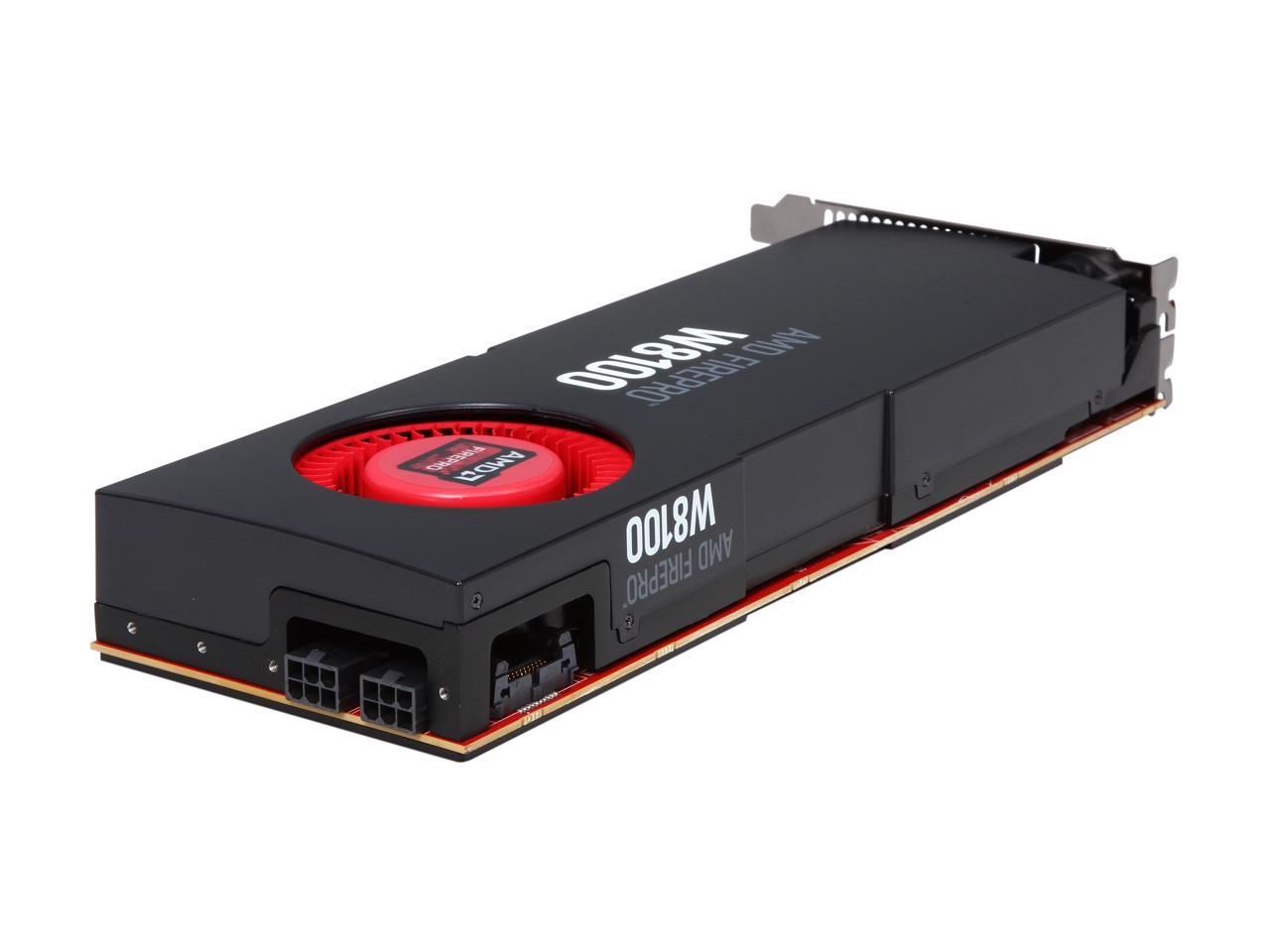 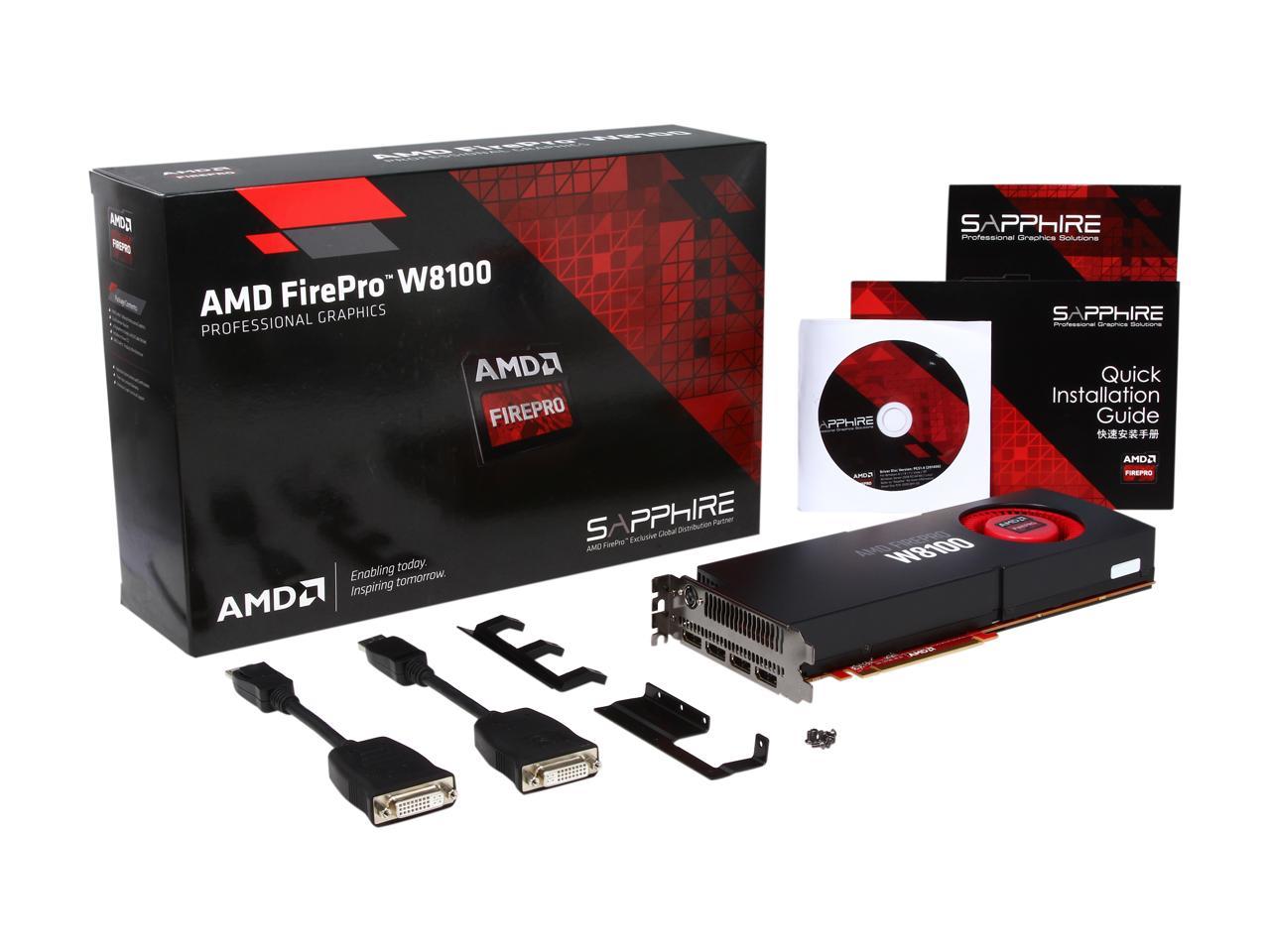 The AMD FirePro™ W8100 workstation graphics card adds up to 4.2TFLOPS of compute power to your graphics-centric workflow and comes equipped with 8 GB of ultrafast GDDR5 onboard memory.

The AMD FirePro™ W8100 workstation graphics is based on the second-generation of AMD Graphics Core Next (GCN) GPU architecture and, like its predecessor, can perform graphic and arithmetic instructions in parallel. Compared to the AMD FirePro W8000 GPU, it now features four times as many compute engines (eight instead of two ACEs), resulting in significantly more computational performance.

Combine up to four AMD FirePro W8100 workstation graphics cards in a single desktop system and leverage the combined processing power for personal supercomputing or to work with multiple 4K video streams in real time, layer in effects, make color corrections and edits on the fly.

Enables professionals to tap into the parallel computing power of modern GPUs and multi-core CPUs to accelerate compute-intensive tasks in leading CAD/CAM/CAE and Media and Entertainment applications that support OpenCL. The AMD FirePro W8100 graphics card is expected to support OpenCL 2.02, allowing developers to take advantage of new features that give GPUs more freedom to do the work they are designed to do.

Allow users to work at a whole new level of speed and responsiveness. With a 512-bit memory interface and 320GBps of memory bandwidth, users can edit 4K video, layer in multiple effects and color correct on the fly, or load massive assemblies and data sets and manipulate them in real time.

Helps ensure the accuracy of your computations by correcting any single or double bit error as a result of naturally occurring background radiation. ECC support enabled on the external GDDR5 memory only.

PRT can utilize absolutely enormous texture files, up to 32 terabytes large, with minimal performance impact. PRT accomplishes this by streaming small bits of these massive textures into the GPU as needed, giving compatible applications a virtually endless supply of unique texture data.

AMD ZeroCore Power technology leverages AMD's leadership in notebook power efficiency to grant our desktop GPUs the ability to power down when your monitor is off, also known as the "long idle state."

AMD PowerTune is an intelligent system that performs real-time analysis of applications that utilize a GPU. In the event that an application is not making the most of the power available to the GPU, AMD PowerTune can improve that application's performance by raising the GPU's clock speed automatically.

Cons: My system is using 3 x 24" LG246W HDMI monitors at 1920 x 1200. Two monitors are using the included DP 1.2 to active DVI dongles with active DVI to HDMI cables. Third monitor is using DP 1.2 to HDMI 1.4 dongle with high speed HDMI cable. 1. The card is unable to correctly display the desktop image on the monitor using the DP to HDMI dongle even with the other monitors disabled / unplugged. 2. The card is unable to recognize all three monitors all at once, usually not recognizing the two monitors with the DP > DVI dongle when the DP > HDMI dongle is plugged in. All three monitors work fine individually, or two at a time work fine using the DP > DVI and DVI > HDMI dongle - cable combination. I suspect there is a timing issue that prevents the two different adapter styles from working together. But there is also an issue that prevents the DP direct to HDMI adapter from working correctly with or without the other monitors plugged in. Result: If you have HDMI only monitors, don't try to adapt DP to HDMI directly - it won't work. Instead, with monitors that use an HDMI input, you will need to use a DP to DVI dongle and then use a DVI to HDMI cable downstream. Two DP to HDMI dongles are included with the card. If you have more monitors, you'll need to get more of the same. With DP capable monitors or HDMI capable monitors, this is probably not an issue.

Overall Review: I have ordered a third DP 1.2 to active DVI dongle. I'm fairly sure this will solve the above issues. Quite disappointed though at the hassle involved with adapting directly from DP to HDMI. Planning to upgrade to new DP capable monitors ASAP...!! Roughly 20% speed increase over prior twin Radeon HD 5750 cards using CAD benchmark software. My water cooled machine was totally silent prior to installing this card. Many reviews claim the card fan is loud, but even under full stress benchmarking load the fan is barely audible in a quiet setting - not silent, but quiet - definitely a PRO.

Pros: As previously given...

Cons: The saga continues... Success..!! At last it seems to be working with all three monitors. See comments below for the details.

Overall Review: With a new "AMD APPROVED" adapter from DisplayPort to DVI, the card is now correctly displaying three monitors, each of which are identical with a native resolution of 1920 x 1200 @ 60 Hz. The monitors have only an HDMI input option, so downstream from the adapters is a DVI to HDMI cable. All three monitors are now fully operational at their full resolution. After going through multiple adapters that did NOT work (time, money, hassle, etc.) finally the New Egg Item #12-200-949 does the job. Extra good, thank you Startech...! This has been a bizarre journey to get full functionality out of the card, but I'm glad it is now working properly. This would have been so much simpler if the "AMD APPROVED" card-specific DP to DVI adapters had been listed in a flyer with the card, or in the User Manual. You are left to find this info online at the AMD website. As said previously, I hope to eventually upgrade to DP high-res or 4k monitors at which time I fully expect to be able to rate this card at 5 eggs. Meanwhile I can't give it 5 eggs due to the nearly unbelievable adapter run-around just to get three semi-legacy monitors working on this card. With the above information, if you have legacy monitors you will probably be able to give 5 eggs right out of the box... HTH...

Pros: As in my prior review.

Cons: With new DP 1.2 to DVI adapter in place, it still does not work. See comments...

Overall Review: The two DP to DVI adapters that came with the w8100 card DO WORK, in this case adapted downstream from DVI to HDMI for the monitors that I have, which unfortunately only take HDMI. However, after trying out a new DP 1.2 to active DVI adapter, no dice... It still is not working with the new adapter even with the other two monitors off and unplugged from the card. Using that new adapter, the display is too large, off center, and partly off to the side so part of the screen is not visible. If I switch to the AMD supplied adapter, it works with each of the three monitors, ruling out the monitors, cables, and the card itself. I have now ordered an "AMD APPROVED" adapter to go from DP to DVI. A list of those approved adapters can be found on the AMD web site. I will post again if the new "APPROVED" adapter is successful. However on reading the fine print in the w8100 manual, it may turn out that it is not even possible to have three HDMI monitors attached to the card. This means the card is DEFINITELY NOT backward compatible. This is an extraordinary waste of time and money to deal with. This information should be made clearly available in the sales literature, not buried deep in the user manual. Temporary workaround is that I will have to re-install one of my Radeon 5750 cards to get the third monitor working. Unbelievable...

Pros: Various PRO's are as stated previously... see my prior reviews... But also... through the end of September 2014 there is a 50% rebate available from AMD (YES it is true...!) . Inquire with AMD for more information about this promotion. This is an incredible incentive, placing the card in the price range of the venerable TITAN and equivalent extreme graphics cards from AMD. This makes the card a definite BUY, despite the hassles I've had with various after-market display adapters in order to get this thing working...

Cons: Please be aware of the limitations of third-party legacy adapters that are not on the "AMD APPROVED" list...!! See prior reviews for more information.

Pros: This card does have defined edges and detail. EEC and 10 bit pixel support.

Cons: Hardware and software have shortcuts and glitches. Overheating, bad pixel issues and terrible support. Many of these cards are defective (according to many other users) and getting a good batch or card is luck of the draw. Bad card damaged my system so I had to RMA the motherboard and am still trying to get a working card after a year plus.

Overall Review: Didn't work for me, I have to wonder how they can stay in business making such lousy products. I will not gamble with another one of these or anything else from AMD. I would recommend upgrading your cooling setup and monitoring this GPU to make sure it doesn't fry your MB.