Shop Confidently with 30-Day Hassle-Free Returns
OUT OF STOCK
Sold by: Newegg
Shipped by Newegg
This item is currently out of stock and it may or may not be restocked.
Out of Stock
Add To ListFound on 2 wish lists 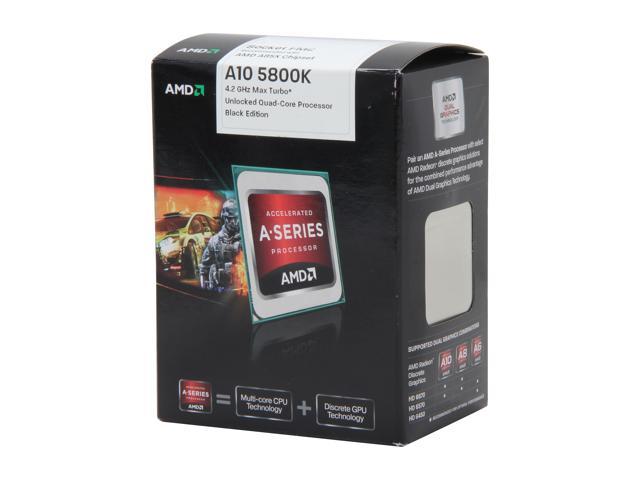 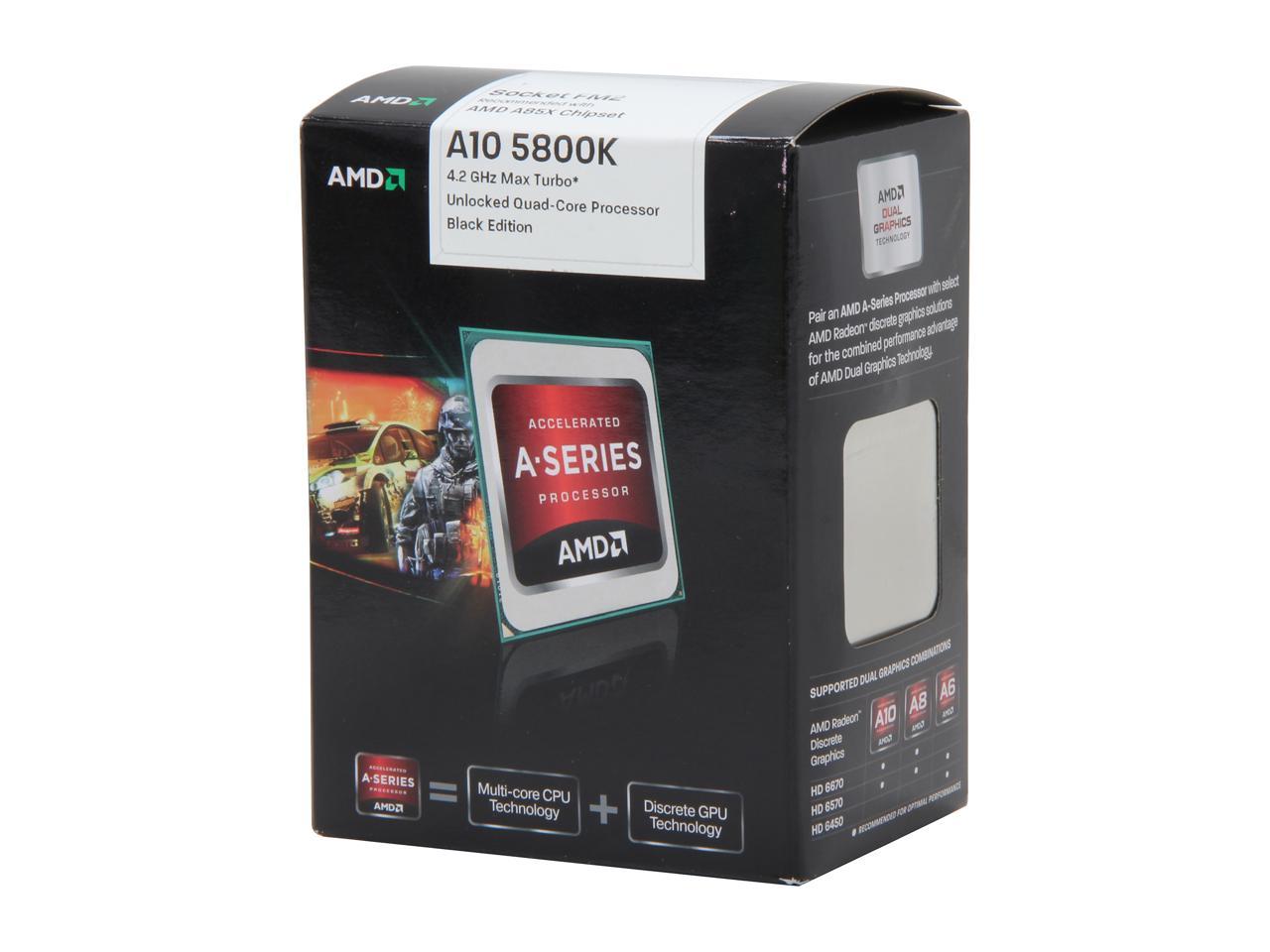 Continuing the excellence of high performance and low power consumption of the previous generation's APU, the AMD Trinity APU once again leads the way in the industry. This new generation APU, like its predecessor, combines a multi-core CPU and discrete-level GPU to provide both excellent computing power and premium graphic performance in a single chip.

It's got revamped internal architecture for both CPU and GPU parts, complete with an array of AMD exclusive technology such as AMD Accelerated Video Converter. AMD Eyefinity Technology and AMD HD Media Accelerator enable an evolved performance for your workload and entertainment, while compromising zero energy efficiency. AMD Turbo Core Technology 3.0 intelligently adjusts the working frequency of both CPU and GPU based on actual load levels to provide more performance when you need it most.

Now you can get the best of all worlds. The performance of multicore CPU technology and the brilliance of premium AMD Radeon graphics technology - all in a single chip, at a great price!

Pros: This chip is fantastic. It's very close in speed to the i5 sandy bridge line but for a lot less money. The graphical power is pretty nice too and runs stable at 866MHz (800 standard) in every build I've tried it in. That results in approx a 6.4 rating in WEI, give or take a bit depending on the RAM speed. I've seen it get up to a 6.8 with dual channel native 1866 RAM on a good board. Most A10s run at 4.0GHz without upping the voltage but a couple hops up results in stable operation at 4.2GHz. Despite being 100W TDP, this chip really doesn't get hot. At stock speeds, running Prime 95, it got up to 104 Fahrenheit. At 4.2GHz with 866Mhz GPU core and the voltage around 1.420, it only reached 117 degrees with stock cooling. On my new Xigmatek enormous cooler + arctic silver, it didn't cross 108 no matter what I did.

Cons: The fan is TERRIBLE. I've ordered two A10s and one A6 and all three had insanely loud fans. The heatsink isn't exactly structured for quiet airflow either. My last A10 had a fan that was damaged and sounded like a truck idling and I ended up having to replace the entire heatsink and fan because no 70mm fan was quiet enough blowing across their awful heatsink.

Overall Review: You almost have to assume you'll need a different cooling solution than the stock one which really adds to the cost.

Pros: Purchased this on sale from Newegg for less than a 100 bucks. Installed it on a MSI FM2 board for a new home server using my purchased copy of Windows Server 2012R2 Essentials. With 16GB G.Skill memory the server really has great throughput of data. No video card needed. Excellent CPU all around.

Cons: None. AMD always provides a great bang for your buck.

Overall Review: The server runs 24/7. No temperature issues with the CPU. Loving it.

karen b.
Ownership: 1 week to 1 month

Pros: As an update to an earlier 5 star review.my os unknowingly was forcing the cpu to run dual core only and performance took a healthy hit a 6.8 wei for a dual core pushed to a 7.3 running quad.im sure some ddr1866 or 2133 would make the cpu even faster my ram is running ddr1680 9-9-9-27

Cons: the packaged heatsink looks like a toy,i had an fx 8350 laying around and with some zalman paste it just runs cool

Overall Review: this cpu is all about speed and value oh my it is snappy!! fast cool quiet ..its like it doesnt even try and its blazing thru whatever i want...in fact its so fast i swear my sata2 hard drive is a ssd...yes it is that good a cpu!!

Pros: Great performance for the price. No need for a graphics card. Works great in a HTPC build. Very stable and reliable.

Cons: Like all the other reviews this thing runs hot. over 57c at idle sometimes. The fan and heatsink is very minimal. I can see a slowdown in performance while multitasking. Still need to add a graphics card to run some games at higher settings.

Overall Review: GIGABYTE GA-F2A85XM-D3H FM2 Motherboard. G.SKILL Sniper Series 8GB (2 x 4GB) RAM First thing I'd do is to upgrade the heatsink. Might be a must depending on how well your case flows. My case has very good airflow and I'm doing good with the stock cooler although it does get pretty warm sometimes. I do plan on an upgrade soon. I don't play much on my pc so I don't have much to say about it's gaming performance but I'd say on newer games you'd want to add a card because I tested this on a few older games and was able to get some slowdowns on max settings. Runs great with everything I do with it on my multimedia PC.

Pros: supposed to be good

Cons: mine was defective

Overall Review: called AMD and they said they had a bad batch but they should of all been returned. said mine was doing what the bad batch did.

Cons: I wish I could've bought an OEM version. The heatsink is so tiny and not silent (Last time I had such a small heatsink in 2000 for a celeron 600 with TDP 20W...). Definitely, will buy something like Scythe Ninja 3100 B or alike.

Pros: Still operating like a champ. I compiled a kernel, and the sucker was *fast*. Compiling the modules part of the kernel (for those not in the know, that includes all of the drivers one might need for one's hardware) usually takes over an hour on my HP Pavilion dv7-7227cl laptop, with its 2.3 GHz quad core processors (A10-4500). I put the 'time' command in front of the 'make modules' and after compiling had finished, it was a mere 20 minutes, a third of what it took previously, if not less. Amazing! I am very pleased with this purchase, and look forward to what else I can do with this extremely capable processor!

Cons: Of course, the price would drop $20 *after* I bought it. Thanks, Newegg. I could have used that $20 elsewhere. No dings here, though. That's the nature of technology; price drops are frequent. It doesn't help that it occurred when it did. That's Murphy's Law for you. :(

Overall Review: None other than what I stated above. I will state for the record, however, that you will read many reviews stating that the stock heatsink is junk. These people would have you believe that AMD is cheating you on the heatsink part; they should have gotten you a better part! The truth is that the heatsink does what is advertised; it keeps the processor cool. I can state this with perfect honesty, because I run this processor in an Antec ISK 300-150. I added a case fan (It has room for two, and only one came with it), Without the second fan, I felt a lot of heat coming off the case; now, it's barely above room temperature. IMO, that's the ideal of a properly-cooled processor and case. All I'm saying is that you should read the reviews with a grain of salt. Don't believe everything you read.

Pros: With a gentle overclock of the GPU to 950MHz and pairing of fast RAM, this thing is phenomenal for everyday gaming. My most played game is StarCraft II, which I run at 1600x1200 (nearly the same number of pixels as 1920x1080) and every conceivable graphics setting turned all the way up... beautiful. And the CPU cores are more than able to keep up with all of the destruction on screen. Most people buy this with the intention of overclocking, but upon finding out how horrible the stock HSF is I decided to actually go the other way; at stock 3.8/4.2-turbo, I found total stability in dropping the stock vcore all the way down to 1.275v from 1.425. Things run even cooler now, it's still solid as a rock and I still have more CPU power than I can figure out what to do with.

Cons: The HSF. It's loud and rinkydinky. But that's to be expected.

Overall Review: Paired with 2133MHz RAM to feed the bandwidth hungry APU, a gentle GPU overclock and a decrease in the CPU core voltage allows for an amazingly capable system with a very small thermal footprint.