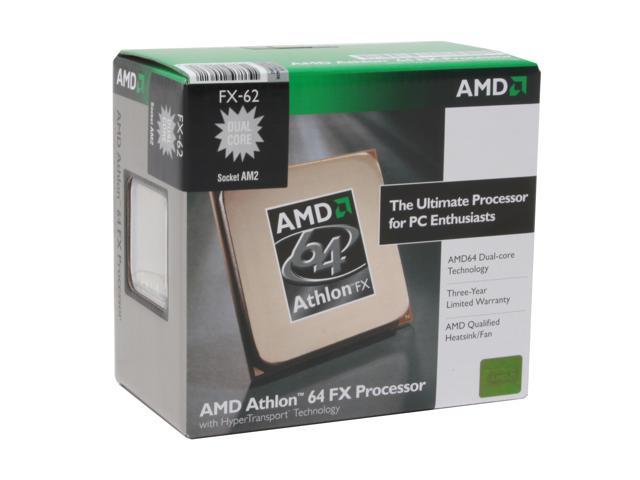 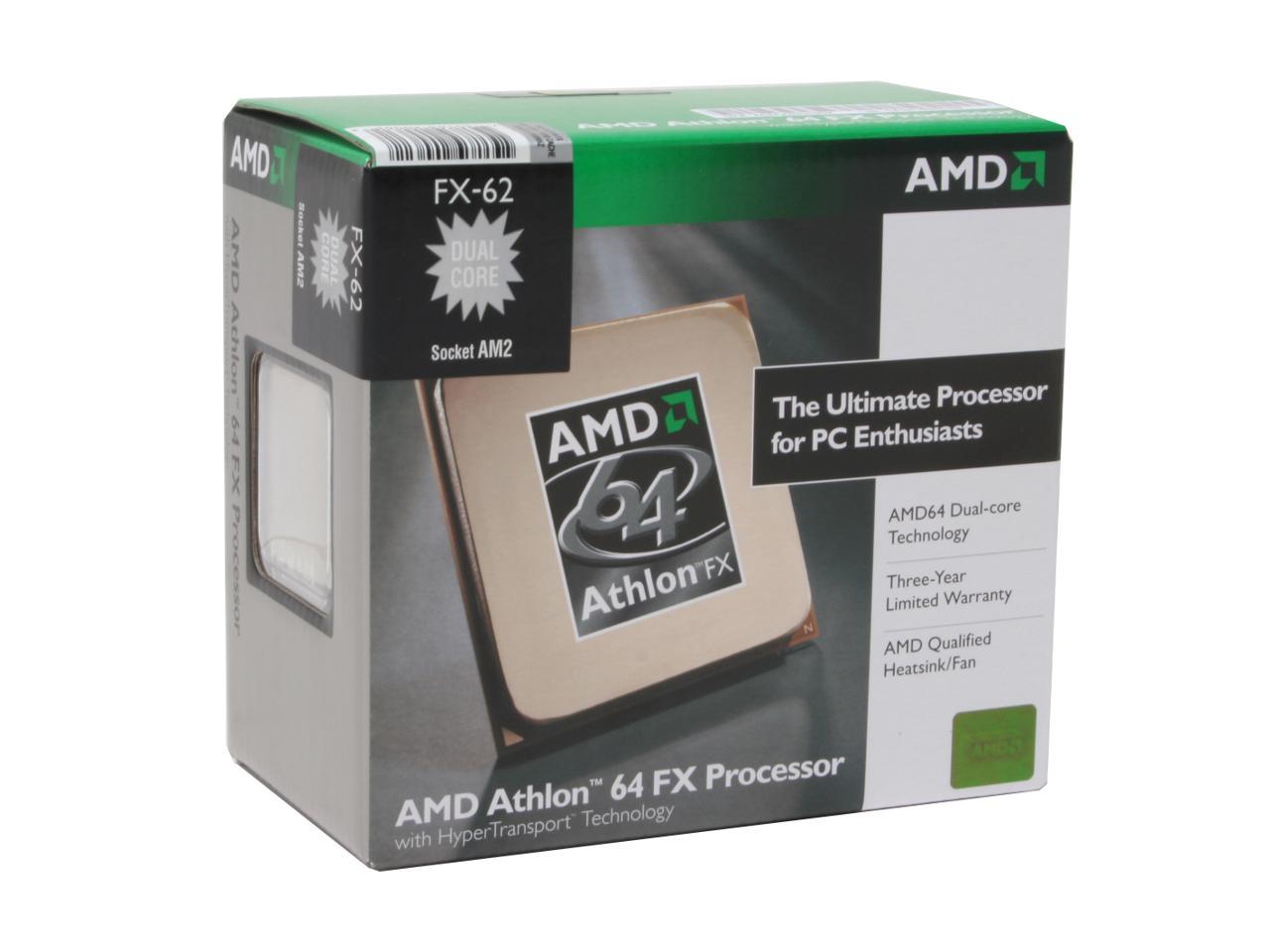 (126) Write a Review
OUT OF STOCK.
Overview
Specs
Reviews
The AMD Athlon 64 FX-62 processor is designed specifically for PC enthusiasts with the power of dual-core technology. The next generation of games will demand unprecedented performance to provide an extraordinary level of realism and awesome 3D graphics. Systems based on this powerful chip feature two processor cores operating at 2.8GHz with 2 x 1MB (2MB total) L2 Cache to deliver leading-edge performance for the most demanding entertainment or multiple applications.
The new Socket AM2 from AMD is designed to enable platform innovations such as AMD Virtualization and high-performance, unbuffered DDR2 memory (up to DDR2 800) to the award-winning AMD64 architecture. Other features include support for 3DNow! Professional technology and SSE3 to accelerate multimedia applications, enabling stellar performance when working with audio, video, and photography software. This advanced chip represents a leap forward in both speed and power for AMD, and is a stellar performer which can do anything you ask it to.

Overall Review: I don’t understand why some people here have difficulty overclocking this CPU. It is so easy that a baby can do it; all you have to do to reach 3000 MHz is to increase the multiplier to 15. I have been able to overclock it to 3400, and it is still very stable, even under heavy load.

Pros: This CPU is one of the best for the price. It may not be the fastest CPU available anymore but it still has plenty of life and is capable of handling pretty much any application. I have mine paired with an AMD 580x Crossfire Northbridge and 2 Radeon HD 2900XT 1 Gig GDDR4 cards. Fastest computer I have ever owned! Plus, socket AM2 will be compatible with the next generation of AMD chips so you have a steady upgrade path. Awesome stock heatsink.

Cons: its not the fastest anymore.

Overall Review: Its a good buy for what Newegg has it priced at right now. Get them while you can!

Pros: Awesome processor, incredibly fast. Coming from an AMD athlon 1900+ this is a dream. Of course newegg shipping is uberfast :) Can easily run multiple open programs without being hindered in any way. Things open quickly, no problems and installation was a breeze.

Overall Review: Well worth every penny. Some Core 2's are faster but I prefer this.

Cons: i bought it a few months ago when it was alot more! other then that nothing.

Pros: Been building Pc'sfor 20 yrs. and have used both Intel and Amd. Always seems like while Intel may have the fastest cpu AMD always has a comparable one that has more stability! This cpu is very fast and stable even overclocked. Amd has some of the best overall cpu's on the market.

Cons: NONE performs flawlessly just as expected from a AMD cpu. It did force me to buy a better Monitor.

Overall Review: I have this on a Asus Crosshair with 2gigs of ddr2 800mhz ram, 2 evga/gf 6800gs 256ram in sli and it screams threw all programs and games. I also work with video with Pinnacle 10 which really uses the processor and this system burns threw it with amazing speed.

Pros: Extremely fast and easy to bump up the speed even more thanks to the unlocked multiplier. Easy to install, and the stock heatsink looks great although I stuck with my Zalman 9700. Great price compared to 2 months ago.

Cons: Price dropped again after I just bought it. Requires alot of power to run it, especially if you plan on overclocking it. I ran it at 3.2GHz for a few days, and it took a VCore of 1.55 to keep it stable. Not to mention I had to run my CPU fan at full speed to keep the CPU temp in the 38-40C range when idling. While it ran Mark of Chaos and Jade Empire fine while overclocked, it couldn't handle BFME2 -- I'll tweak it some more and see if I can get it to run stable with it.

Pros: This is definatly one of the best processors I have ever owned. This thing handles eveything I have thrown at it so far and it isn't near maxed out. Some performance issues in a 32bit OS but not the processors fault, run this thing in a 64 bit environment and it'll take an aweful lot to stop it. Fast, Stable, and easily handles overclocking.

Cons: I have yet to find any that are the fault of the processor.

Overall Review: AMD needs to step up to Intel and take over like they did when they first started making a name for themselves.

Pros: Insanly fast, can decode - reincode, and burn a 4.7gb dvd in 7 minutes!!! I can do photoshop, indesign and illustrator, and bounce back and forth with no lag what so ever. Sometimes i do photoshop web design, with a game running in back. Guess what? No problems setting up. Drivers worked out of the box, then i just updated from web.

Overall Review: I have been using this for about 2 months and 100% love it. And to think before i was running an unstable, hot,single core intel chip. I have built 4 more systems for friends within the past 3 weeks all using AMD X2 chips, and they LOVE them :)