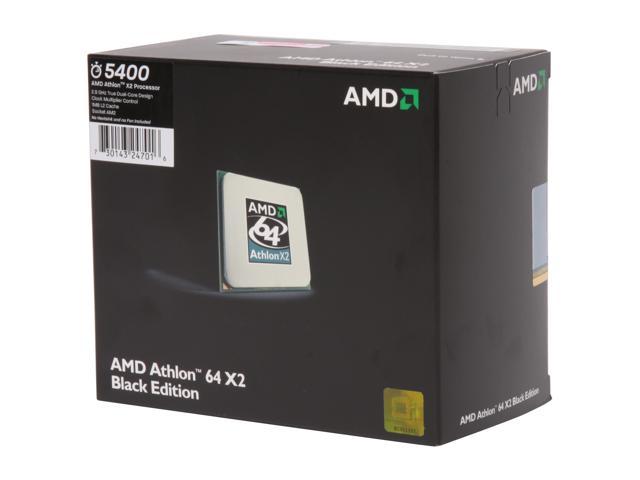 (351) Write a Review
OUT OF STOCK.
Overview
Specs
Reviews
Throw another day’s work on the "done" pile. The Athlon 64 X2 5400 Brisbane makes it easy. The dual cores run at a blistering pace of 2.8GHz and have 1MB of L2 cache each. This advanced processor is part of the AMD64 family and as such it is fully compatible with today's 32-bit software and is ready to handle the ever increasing number of 64-bit programs out there.
More oomph for less power, that's the promise of Cool'n'Quiet technology. This feature allows the OS to slow the processor down when full speed isn't necessary. That reduces your system's power demand and can save you money. The more immediate benefit is that less power means less heat, so your system runs cooler and that will let it last longer. It also means the fans will slow down and make less noise.

Overall Review: i'm not he greatest overclocker but i know the basics someone will probally be able to go higher maybe hit 3.5 or 3.6 or higher but 2.8ghz to a 3.4ghz isn't bad for me

Pros: I normally dont even write reviews cuz i think thier a waste of time a lot of times, but as a professional pc builder, i wanted to say that all these people are reviewing the 6400+ for 80 bucks..the Kuma 7750 black at 80+ bucks...well Im a serious overclocker with a lot of experiance, and im telling you, BUY THE 5400 BLACK...its cheaper, runs cool, and im running it now at 3.2 stable as a rock with a gigabyte 570 sli mobo and some generic ram...fsb at near 1200. this cpu is the deal for the money.

Overall Review: like I said..I've built hundreds of pcs..this 5400 black aint no joke in the right hands...and for 56 bucks? It rips.

Overall Review: Be aware that mine would appear to run fine all the way up 3.5GHz. Windows would load just fine with no BSOD. However testing would show the OC to be unstable. I ran VCORE all the way to 1.5375 one notch at a time and it still would not stabalize at 3.4. You may get one that will, but it may also just appear to be stable. I suggest using Prime95 on torture test as well as other benchmarks to confirm. Either way its still a great processor.

Pros: What a deal. I am not much of an overclocker. This is for a HTPC anyway. But I chose this over the non-black X2 5400+ or the 4850e because I didn't need the stock heatsink and bceause of the good deal Newegg was offering with the motherboard combo and discount code. I already have a Scythe Shiruken low profile HSF that I was planning to use anyway.

Overall Review: Stays pretty cool at stock speed with the Scythe heatsink, but I haven't really taxed it yet. I probably won't either. In fact I was originally planning for one the 45watt dual cores. I am more likely to underclock and undervolt this CPU to minimize noise and heat. But it is nice to have the headroom in case I need it later.

Pros: This is a great cpu,installed in my daughter PC,Replace an old 3800 cpu,made a big difference in programs and games,pair it with a 8800 GTS video card.

Overall Review: for the price is a great DEAL.

Pros: Exceptional processor for what you pay, and I even bought it back when it was still around $80. Fantastic value.

Overall Review: Overclocked it to 3.0ghz via the unlocked multiplier right out of the box and haven't looked back since. Rock solid.