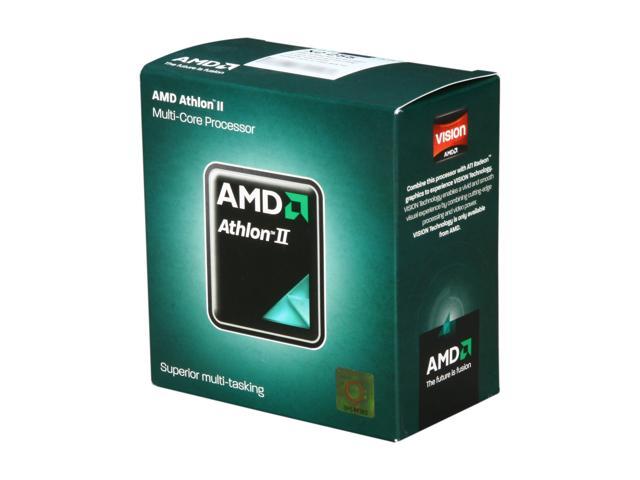 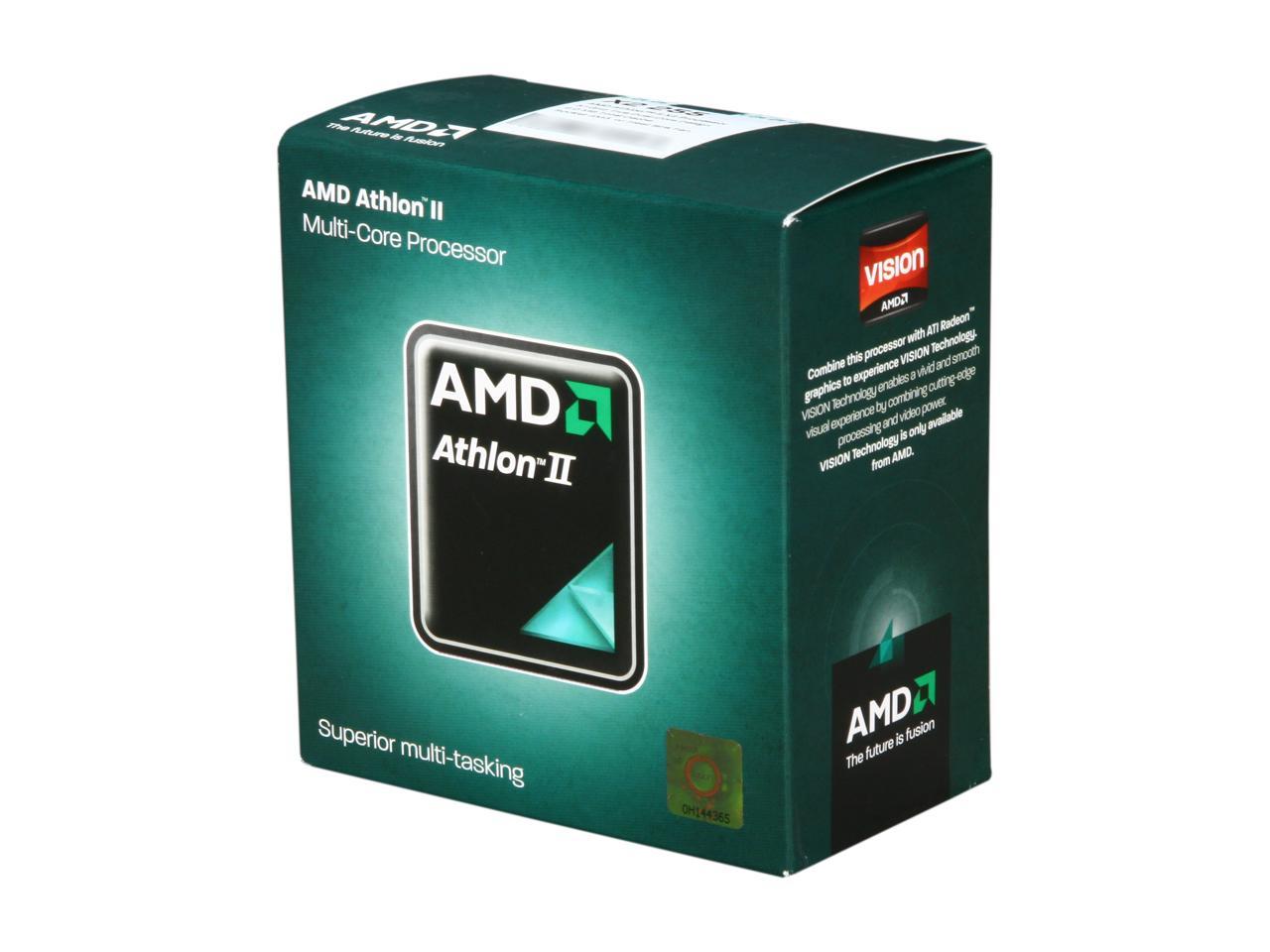 (82) Write a Review
OUT OF STOCK.
Overview
Specs
Reviews
Prepare yourself for a new personal computing experience with the Athlon II X2 255. Save time and accomplish more with multi-core processing that makes multitasking quick and simple. The Athlon II X2 features the next-generation AMD Direct Connect Architecture for a fast, responsive PC. This processor is also optimized to take advantage of the power management features in Windows 7 using AMD PowerNow! 3.0 Technology.
Energy efficiency is important to AMD, allowing you to enjoy a cool, quiet PC while saving energy and reducing heat, noise and the effect of your computer on the environment. Energy efficiency innovations include Cool’n’Quiet, AMD CoolCore and AMD Smart fetch. These technologies reduce power consumption and processor activity. You’ll experience up to 50% energy efficiency over previous AMD Athlon processors.
AMD Athlon II processors also offer support for Virtualization Technology. You can run virtual environments on one system with ease, allowing you to use legacy programs on a separate operating system. Also providing 64-bit support, this processor can handle the most demanding programs with ease. Add the convenience and power of multi-core processing and enjoy the benefits of energy efficiency with an AMD Athlon II X2 255 today!

Pros: * Fast, for its purpose * Inexpensive, compared to Intel options * Quiet stock fan * Cool core temps <40C under load [stock HS/Fan] I used this for an HTPC build. I wanted Dual-Core performance for handling Blu-ray playbacka nd audio decompression without video performance loss. I opted for AMD and paired it with a MoBo having on-board video instead of an Intel chip with on-chip video as a better performance choice for HTPC application. I am not disappointed with this choice at all, but I can't really compare it to the alternative to say "which is better". The price was cheap, considering it is dual core with 2MB cache at 3.1 GHz.

Cons: I'm not sure that Everest is reading the CPU temperature right as it never seems to exceed 22C.

Pros: Low cost, above average performance. I don't care if you're loyal to intel, you can't get a processor this good from them in this price range. It's definitely no Phenom, but it's great for entry level gamers and mild overclocking. The heat sink is small, but this processor doesn't get too hot, even after hours of gaming.

Cons: Not a single one

Pros: This processor performs amazingly well for only $62.99 (at the time of my purchase). For a first time system builder, the difference between this and the Athlon XP 2800+ I upgraded from is ridiculous (the 255 is 4x as fast as the 2800+). I use this for web browsing, music and watching DVD's so it handles all that without a problem whatsoever. Boot times to the Windows 7 desktop is just under 45 seconds which is good. Temperatures actually stay pretty low. They're about 29 to 30 degrees idle and maybe 33 to 35 degrees while on the Internet with many tabs and doing other tasks. The highest I've seen it is 40 degrees and that's while playing an Internet flash game. This scores a 6.5 in Windows Experience Index. I've had Firefox 4 with 15 tabs, IE9 with 6 tabs, CCleaner, OpenOffice, Windows Media Player, Visual Studio 2010, Avira and other programs open that didn't push this thing beyond 35% usage. It's truly a multi-tasking beast!

Cons: There are no cons.

Overall Review: The heatsink and fan look dinky when you first see them. But don't let that fool you because they cool this processor well. This processor is virtually the same as the AMD Athlon II X2 260 and 265 with the difference being a 100 and 200 Mhz difference. I'm sure you could overclock this to those speeds on the stock heatsink/fan and get a minor but noticeable difference in performance.

Pros: AMD bang for the buck. This a great little CPU, even for gaming. I'd recommend the Phenom for higher end performance, but the Athlon, at this speed, is sufficient. Definitely enough power for your run of the mill desktop.

Cons: Only 2MB cache. But that's the difference between the Athlon and Phenom. The cache doesn't seem to be a big factor for desktop applications, so if that's what you're doing then pull the trigger on this one. But if you're a gamer, you may want to consider the Phenom 550 instead of the the Athlon 255. They both run at the same clock speed but with the extra cache, the Phenom usually sees about a 10%+ performance increase in gaming.

Overall Review: Great chip. Used for many client builds. Excellent at multimedia applications. Runs cool. Idles at <30C w/ stock cooler. Overclock potential is there but I doubt you'd see much over 3.4Ghz or so since it's a matter of bumping the voltages and FSB.

Pros: Very quick cpu. It's main selling point is the low wattage usage. It's the lowest you'll find among AM3/3.0ghz+ cpus. I know it can be OC'd but I haven't tried it yet. Works flawlessly with Win7 64bit professional. Great stock heatsink+fan.

Overall Review: The stock heatsink and fan (I had no idea AMD provided both with each cpu, btw) are amazing. CPU idles at 33*C. The fan isn't even loud which is even more amazing. Good stuff.

Pros: Price/performance clocks to 3.64 stable on an 880G MoBo. I'm sure I could get it higher if I tweaked the RAM/Northbridge down a bit and changed the timings, but meh, the user is happy with 3.6. Nice cache size, but expected in the latest Regor. Price Clocks decently, though I didn't push the voltage or the processor too hard due to a non-stock heat sink. Performance Price No games to date take advantage of more than 2 cores, so no need for a tri or quad if you're not doing video editing or heavy multi-tasking. I use a quad and I don't notice much difference in most day-to-day activities.

Cons: Why is this section required as I would never rate an AMD product under 5 eggs? Wait, I've got one. Its not a Bulldozer AM3+ chip. Dang. Losing 3 eggs for that one (extreme sarcasm).

Overall Review: Didn't use the heat sink that comes with the processor because it is small (3/4" + fan = 1.5"). Its the same one that comes with a Sempron, so it concerns me a bit. I used the stock from an Athlon 64 x2 which is bigger. Both processors are 65W. Without an aftermarket heat sink and a good motherboard, I wouldn't push it past 3.5 if I were you. I'm not rating product for its O/C capability because that's not fair. Stock it is a great speed for its price and would never complain. Advanced Micro Devices user since the K6 and proud of it.

Overall Review: Bought this for a HTPC and works like a champ. I'm pretty sure it out-performs my 1st Gen Core2 Duo e7500.

Pros: Very pleased with this CPU. Bought with M4A87TD EVO MB and 4 GB RAM. It runs fast, cool, and was a breeze to install.

Overall Review: Easy to get up to 3.5 Ghz at stock voltages and HS and fan. Would have like to go to the 3 or 4 core but can't beat the price and had to stop somewhere.