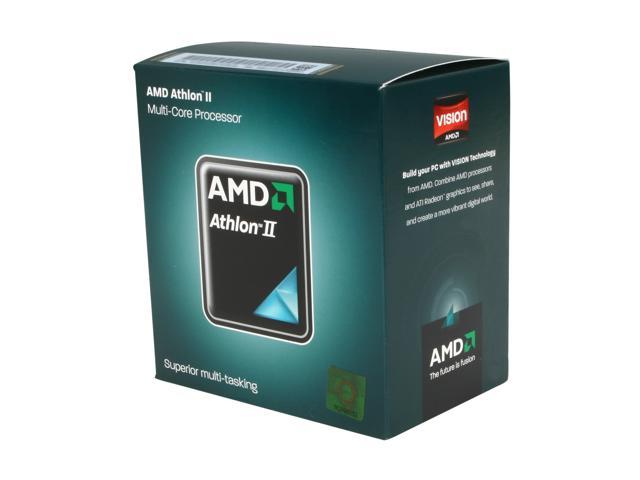 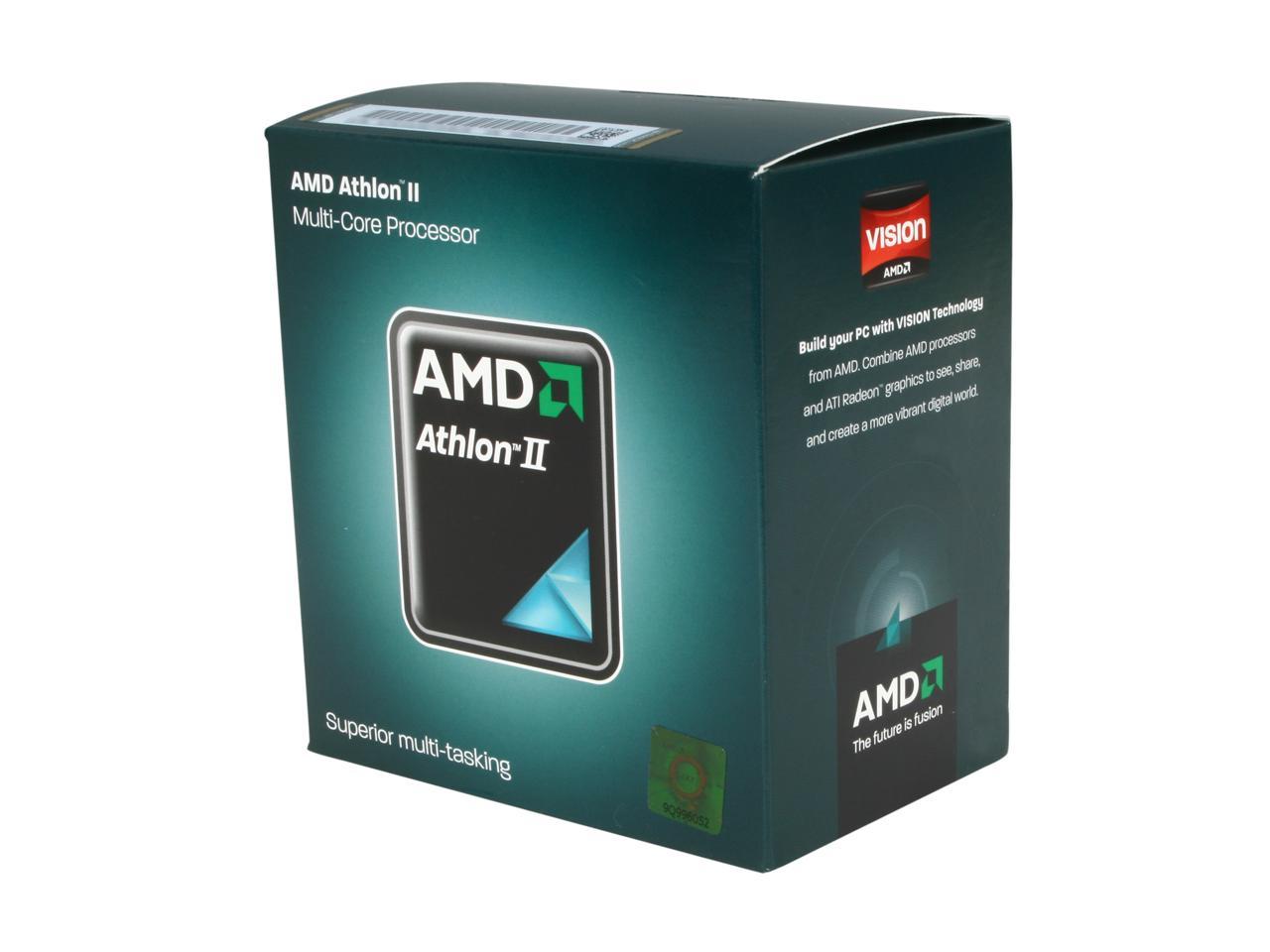 (194) Write a Review
OUT OF STOCK.
LOADING...
Overview
Specs
Reviews
Prepare yourself for a new personal computing experience with the Athlon II X3 440. Save time and accomplish more with multi-core processing that makes multitasking quick and simple. The Athlon II X3 features the next-generation AMD Direct Connect Architecture for a fast, responsive PC. This processor is also optimized to take advantage of the power management features in Windows 7 using AMD PowerNow! 3.0 Technology.
Energy efficiency is important to AMD, allowing you to enjoy a cool, quiet PC while saving energy and reducing heat, noise and the effect of your computer on the environment. Energy efficiency innovations include Cool’n’Quiet, AMD CoolCore and AMD Smart fetch. These technologies reduce power consumption and processor activity. You’ll experience up to 50% energy efficiency over previous AMD Athlon II processors.
AMD Athlon II processors also offer support for Virtualization Technology. You can run virtual environments on one system with ease, allowing you to use legacy programs on a separate operating system. Also providing 64-bit support, this processor can handle the most demanding programs with ease. Add the convenience and power of multi-core processing and enjoy the benefits of energy efficiency with an AMD Athlon II X3 440 today!

Pros: Tripple Core, 3.0 ghz, runs very cool with stock cooler, Idles at 19 C, can get up to 37 C while gamming most likely from the heat my gfx card produces. Fast for gamming at a moderate resolution of 1360x768. Way faster then my aging pentium D 820. This processor reminds me of why I bought AMD over Intel in the first place.

Cons: Fan is a little loud, but thats cause it runs at 3000 RPM to keep it cool.

Overall Review: Cheap replacement system I bought from New Egg. I bought a new motherboard, processor, ram, and video card to replace a motherboard that almost fried. For as cheap as it was, I wasn't expecting the performance I have now. I can play Bioshock2 at all highest settings, 1360x768, no af or aa, stays right at 60 fps with vsync on. Modern Warfare 2 at all extra high settings, 1360x768, no af or aa, constant 60 with vsync on, except when there are a lot of helicopters out in multiplayer, it can drop to around 40. My System: Athlon x3 440 Triple core 3.0ghz Biostar A770E mobo Biostar Radeon 4670 512 mb 2gb Kingston Hyper X DDR2 1066 320 WD Caviar Blue sata hd 500 Watt TRUEPOWER Thermaltake PSU

Pros: I upgraded from a C2D E6400 and the difference is just mesmerizing! Seriously folks, Toms Hardware had it right when they said this is all you really need for gaming/regular desktop application. This processor does it all and has plenty of potential for overclocking if that is your cup of tea. I do not think i have ever owned such a powerful processor for so low of a price. The performance in all of my games are flawless, the install was easy, the price was more than reasonable... what more could you want?

Overall Review: As i said above, Tom's Hardware was dead on in stating that this processor is all you really need and packs nearly the same performance as all the other processors until you hit the upper end Phenom II X4 Deneb range. You would be crazy to get anything else but this processor. While there are minor differences in synthetic benchmarks...the real world performance shows hardly any difference.

4 out of 4 people found this review helpful. Did you?
Charles S.
Ownership: 1 week to 1 month
Verified Owner
Great if you're looking for excellent price-performance ratio7/1/2010 10:32:00 PM

Cons: I can't get my son off the computer now that it runs all his graphics intensive games so well.

Overall Review: I don't really write that many reviews, although I've used Newegg for many years. I was so impressed with this purchase that I wanted to share my experience with those who may be shopping for a real value during these tough, economic times. I paired this with an MSI 870A-G54 motherboard I got for $85 and it had no problem unlocking the 4th core. I added a $150 video card (HD 5770) and 4GB of DDR 1600 RAM for about $100. For just over $400 my computer now can play the most demanding graphics games on high settings. Need for Speed II, Assassin's Creed II, Battlefield II, Prototype, CustomPlay Golf 2010 - all on highest settings and all running very smooth. I'm very pleased with this purchase.

Pros: Excellent stability when overclocked up to 3.8Ghz! I was fortunate to be one of the few able to unlock the 4th core and maintain a stable system. I paired this CPU with an MSI 870A-G54 Military Class Mainboard, which features an EZ Overclocking function, and immediately OC'd to 3.6Ghz. After pushing a little, with a good cpu cooler, I was able to OC to 3.8Ghz w/air cooling.

Cons: Absolutely none that I have found

Overall Review: After unlocking the 4th core, I ran a stability test for 6 hours using "AMD Overdrive", at 3.6Ghz, 3.4Ghz, and 3.2Ghz. My system remained stable at all 3 clock speeds. For the gamer on a budget, this is a GREAT chip, even if you are unable to unlock the 4th core.

Pros: I bought this to use in a budget gaming rig, not really knowing what to expect, though now that it is installed I am thoroughly impressed! I paired this with an MSI 870A-G54 Military Class motherboard w/4gb G.SKILL ddr3 1600, and the overclocking possibilities are tremendous - even on air cooling! I'm using a Zalman CNPS9900NT cooler, and have this chip overclocked to 3.8ghz stable, while maintaining a 40deg Celcius temp under load. I'm sure I could go higher than 3.8ghz, but with World of Warcraft running at an average of 85fps (compared to my old 45fps avg), I'm very happy. For routine office applications this chip also performs very well.

Cons: None whatsoever. For those saying that not having a fourth core to unlock is a con, you should have purchased a quad core chip for a few dollars more.

Overall Review: For the budget gamer, this chip is made of pure awesomeness! A true all around performer!

Pros: Overclocks very easily. Using AMD overdrive, I can get it to run stably at 3.6ghz, in bios it goes even higher, all using the stock heatsink! Great price/ performance Runs faster than my old core 2 quad. low temperatures with stock heatsink, idles at 30C, never goes over 45C under load.

Cons: I couldn't unlock mine (not really a con as I wasn't expecting to be able to in the first place).

Pros: Fast and overclockable. Pair it up with a good mobo & good ram and you've got a winner! Seems to run cool and with little power. Easy to setup.

Cons: It lacks some cache ram which could speed it up. But Hey! With the money I saved, I can get me a h00ker on toity toird street...know what I'm sayin'?

Pros: Speed and overclocking ability. This chip is impressive even when unclocked.

Overall Review: The price/performance ratio here is unbelievable. I was able to unlock the 4th core and have the chip running stable at 3.6mhz. I have it paired with a GIGABYTE GA-MA785GM-US2H mb.