OUT OF STOCK
Sold by: Newegg
Shipped by Newegg
This item is currently out of stock and it may or may not be restocked.
Out of Stock
Add To ListFound on 2 wish lists 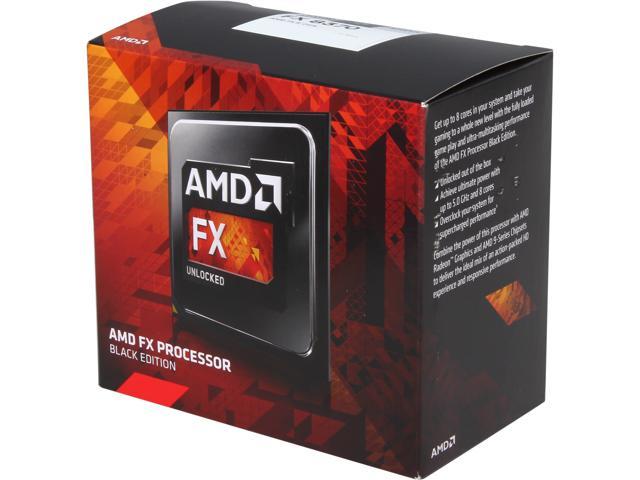 (57) Write a Review
See more "am3 cpu"
OUT OF STOCK.
Overview
Specs
Reviews

Pros: First off, I don't overclock. Don't want to learn, just want a fast CPU out of the box. This CPU is the fastest air-cooled CPU AMD makes. I could have chosen Intel, but pricing is important. CPU performs very well with games, multiple programs open,...really anything you can throw at it. Solid CPU without overclocking.

Overall Review: Paired with a GTX 970, 16GB RAM, 480GB SSD and 2TB spinner, and lots of low RPM fans, I have a nice, quiet gaming build that takes no "tweaking" to rock. An Intel CPU could have upped my raw scores in some areas, but when all was said and done, I have no regrets choosing this CPU. I choose to save money on the CPU and spend it on the GPU instead. A GTX 970 in a single monitor configuration is like buying a ferrari and driving it in the U.S. (it can go faster than the speed limit....a lot faster). So you don't really need a 980 (a bugatti).

Pros: FX-8370 requires a latest bioses for some AM3+ motherboads, in order to make it work. That is why some customers just assume that the CPU is dead on arrival.

Pros: Runs great, fast, cool and as advertised. Not too much money for the performance.

Overall Review: I upgraded from the Phenom II 1100T. I asked the question in the q&a but it never got posted. So i went for it anyways. It's a little better. About average of 12%. Nothing noticable on games, mostly see the increase on the smoothness of programs having mutiples open. All in all I would say that unless you plan on doing some serious overclocking, there really isn't much of a difference between the 2 as far as what I need anyway. I don't want to put it down though.

Pros: -Cheap -Fast even at stock -Encodes video in Sony Vegas twice as fast as my previous CPU *955BE @ 3.8GHz* -Relatively cool running, idles @ around 95F atm and 120F MAX load in Sony Vegas, How ever my Thermal paste still has about a week before its gone through its Burn in period. -Games seem much snappier, as well as all of my Apps -Seems to have decreased my load times a bit, especially noticeable in Planet Side 2.

Cons: None so far, works as intended.

Overall Review: To a Previous Reviewer. Patrick L.. Did you forget to update your Bios to the newest one ? That is most likely the reason your not getting any video with the new CPU :/.

Pros: WEI CPU score of 7.8 without overclocking, (I've found my particular CPU can be overclocked to 4400GHz without issue using AMD CCC, however I chose to run it at stock settings), included fan is quiet and manages to kees everything very cool (typically in the 20-30C range... into the 40C if pushed really hard).

Cons: Its a shame more software programs don't take advantage of the 8 cores, this really is a fast processor... especially when one considers the price/performance ratio.

Overall Review: Mated together with 16 GB HyperX 1866 memory, Gigabyte GA-970A-UD3P motherboard, and a Gigabyte GTX750, it make for a well-balance, performance-wise combo all for under $500. Together with a big SSD and its now my "go-to" video editing rig.

Pros: This processor is a beast and great for gaming. It does everything I need and way more. You can't beat this processor for the price.

Pros: upgraded from an FX-8150. Once setup I noticed a huge improvement. paired with an R9 280x it's a killer system. well worth the money.

Pros: On full performance mode at 4.3Ghz, the temperature stays around 45 degrees with a good liquid cooler (H75) for CPU, and several well laid out chasis fans. On idle, it goes down to as low as 27 degrees. There are no heat issues.