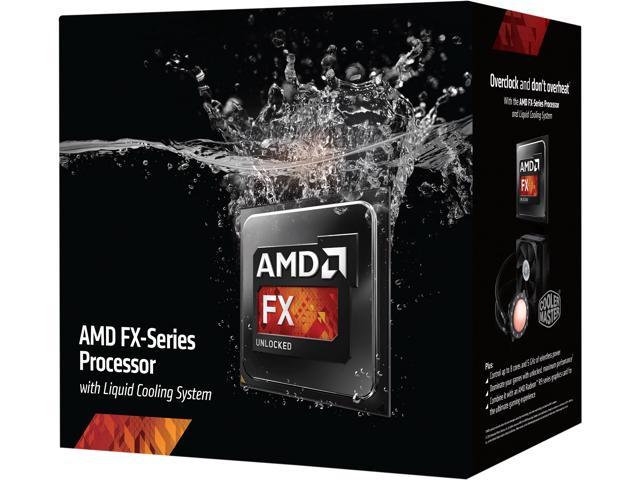 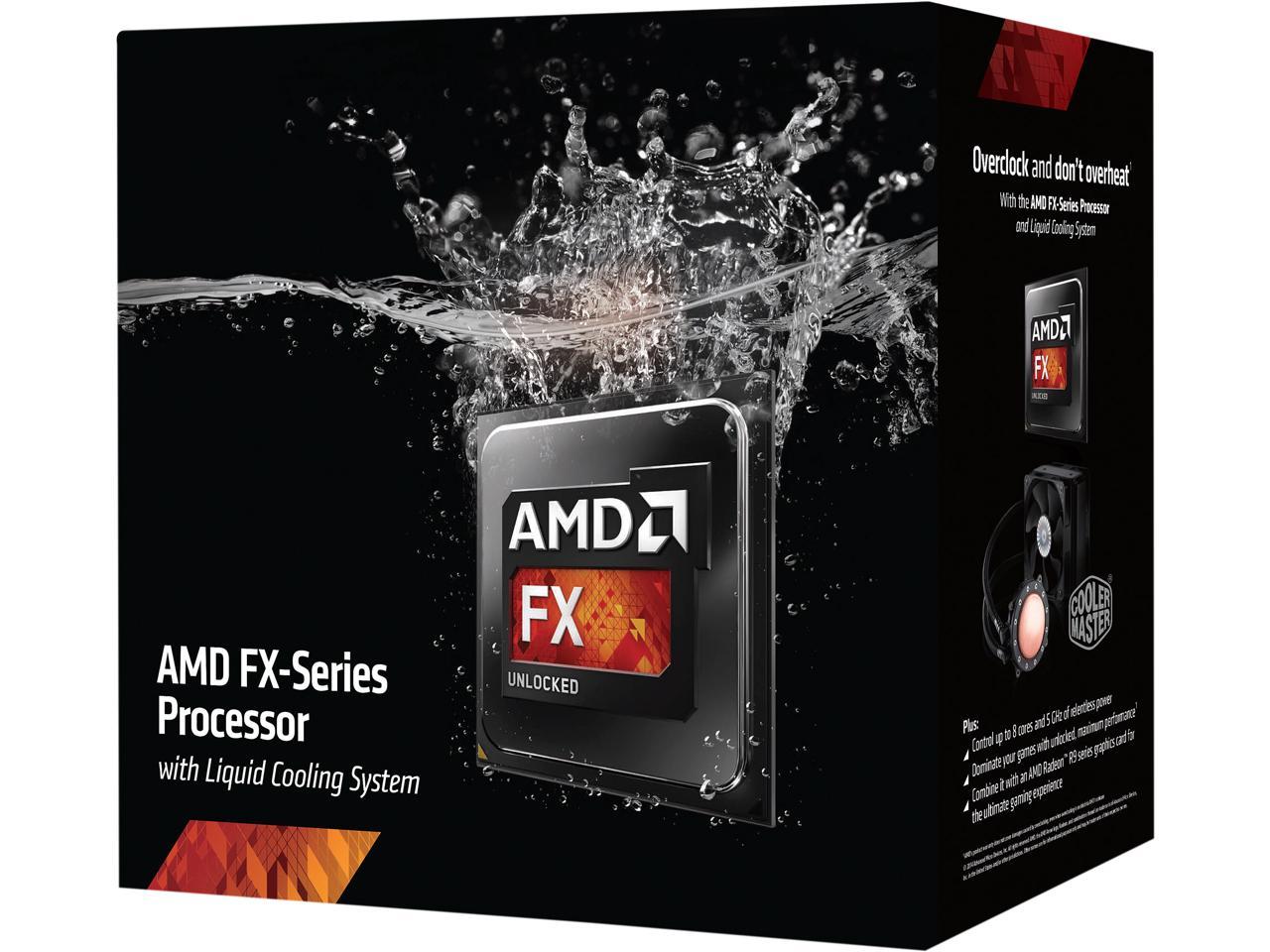 This CPU is only compatible with the selected 990FX motherboards.

*AMD’s product warranty does not cover damage caused by overclocking (even when overclocking is enabled via AMD OverDrive software).

Pros: Fast, this CPU will run anything you can throw at it and then some, it's not quite 4770k fast but it will keep up with one of those in many applications. . And considering this CPU is $50 less than a 4770k and it comes with a closed loop cooler that's conservatively a $50 value that's one helluva deal. You don't even need an overclock with this CPU but with a 5.0GHz overclock mine scores 793 pts in Cinebench CPU rendering, that's only 29 pts less than a 4770k at 4.4GHz. Unless you're really into overclocking or it's several years down the road and you're trying to extend the lifetime of the CPU before your next upgrade I see little need to overclock this CPU Relatively futureproof for gamers. The new consoles that have just been released use 8 core AMD CPUs, this means that games in the future will likely utilize 8 threads and may even be better optimized for AMD systems. I think in the coming months we'll see AMD starting to shine brighter than Intel in games. This is one of the reason I chose to put my eggs in the AMD basket this round. The liquid cooler this comes with is pretty good, the rad is very thick for a 120mm cooler and it seems to do an adequate job dissipating heat. The software it comes with isn't the best though if I'm honest, it feels clunky and unintuitive.

Cons: 220W TDP Hot Hot Hot. With a 5.0Ghz overclock using the stock liquid cooler mine gets up to 70C. But I knew this was a hot CPU when I decided to get it. In addition this CPU can take 70C no problem. I've read on other forums that an AMD engineer said these FX CPUs can withstand temperatures of upto 90C. At stock clocks this CPU isn't too bad though, full load it will get as hot as 55C but this is a non issue because unless you're benchmarking your CPU won't really go up to 100% load. You really need a high end motherboard to use this or the 9590. This isn't really an issue for me since the best 990fx motherboard you can buy is only $220 (Crosshair V Formula-Z) and it's a full featured ROG board. This is surprising to me because I've spent upwards of $400 for high end Intel boards back in the day. Requires liquid cooling. This again isn't that big of a deal since liquid cooling is such an easy thing to achieve nowadays with closed loop coolers. And the closed loop cooler than comes with this CPU is more than adequate, it's actually surprisingly good. This isn't really the CPUs fault but I've had to deal with more distraught Intel fanboys than I've ever had to after buying this CPU. Everytime I tell someone in the enthusiast hardware community that I'm running a 9370 they have to go into telling me how I made the wrong choice and how they think this isn't a very good CPU. I've had people go as far as to tell me that a Core i3 performs better than this CPU.

Overall Review: People say that this thing will end up costing you more in power than it's worth. They haven't done the math, A CPU like this will raise your power bills but by such an insignificant amount. At most this thing will cost you $30-$60 more per year in power than a 4770k. You won't even notice your power bill is more expensive. This is a baseless argument. In addition there are several power saving features that you can utilize. I have it set so when I'm just browsing or downloading the CPU clocks down to as low as 1.4 Ghz, during games like Chivarly or Skyrim the CPU will hangout around 3.4ghz to 4.4ghz. Specs: AMD 9370 AMD R9 270x x2 Asus Crosshair V Formula Z 16GB G.Skill Sniper at 2400Mhz 1TB Seagate SSHD 240GB Kingston SSD Corsair 1200 Watt PSU Windows 7 x64/Linux Mint 16 I had been running only Intel for my gaming PCs in the past, I've spent as much as $1000 for an extreme edition Intel CPU, I am no AMD fanboy, I buy what I think is best for me at the time and this time around I think AMD is just that for me. I think people need to stop letting their biases chose their hardware for them, we're all adults here we don't need to feel we're better than everyone else since we choose a certain piece of hardware over another. It's getting out of hand and ever since I bought this I've come to realize this, the relentless witch hunting done by other people who only use Intel is just ridiculous. Yes if you pay more you can get an Intel CPU that will out perform this, but that doesn't mean this is a bad CPU, it holds its own.

Pros: Now that AMD has apparently come to their senses with pricing this is a good choice if you want to go AMD. A ~$500 dollar price drop as well as the addition of what is essentially a Antec Kuhler H2O 920 closed loop cooler (~$80 value), makes this a solid selection.

Cons: The supplied cooler (Antec Kuhler H2O 920) has absurdly poor installation instructions. Its like trying to install something based on ancient cave drawings.

Overall Review: If you do buy this, do yourself a favor and just throw away the cooler installation instructions and webserach 'Antec Kuhler H2O 920 installs'. The cooler also requires the Chill V software to be pre loaded in order to control the fans- not really possible with a fresh build. Just connect the power to the unit but leave the USB header off until you've booted and are able to install the software. Don't worry, it defaults to 'extreme' cooling without any USB input.

Pros: It's essentially a higher clocked Fx8350 but is much more stable. Included liquid cooling. Price

Overall Review: If you're considering this and the fx8350, it's generally better to buy this one. In the end, it'll only cost you an extra ~$30 or so dollars because of the included liquid cooling, and the CPU heatsink on the fx8350 is nearly unusable, so you have to buy a new one anyway. Just save up a little more, and this one is a much better deal.

Cons: only con I can think of is the power consumption but for me its not really a con because my utilities are very cheap!

Overall Review: guys if the reason your on the fence about this processor is the cooler then go ahead and buy it because the cooler is great. I was going to get a 8350 with a h100i but I opted to go with this since its already overclocked and was a cheaper option.

Cons: Requires mid to high end liquid cooling to perform at it's highest potential (not truly a con, but you should just set aside money for a kit or EK Water Block it, bare minimum kit wise: Corsair H100i or better).

Overall Review: This processor is amazing in every way, crushes games, benchmarks, anything you toss it's way. 9 months later and I'm still happy with the FX 9370 as it has never underperformed or caused Thermal Shutdown in any instance over 9 months. My current CPU setup is : ASUS Sabertooth R2.0 AM3+ Mobo, Corsair RM1000 1000W PSU, & AMD FX 9370. This CPU hasn't seen over 62C (and that's while running the AMD OverDrive CPU Test).

Pros: Runs cool and without issue. Even under heavy prolonged gaming it has no heat issues. I have it paired with the ASRock 990FX Extreme9 under CF in Win 8.1 and the performance is extremely stable. Boot time is near non existent.

Cons: Nothing to report.

Overall Review: If you set up your system with the right hardware, heat is not a issue and performance is flawless. I built this system specifically as a gaming rig and have not been disappointed. Bought for $219 on sale, with $65 gift card ended up spending $155.98. I did change the push /pull fan setup with 2-CM Excalibur's. This added to the excellent temperatures and the overall quietness of this system. I am presently building a custom water cooling system that will cool the CPU and both video cards and will repurpose the water cooler that came with this CPU.

Pros: This is a solid CPU, with a proper set up temps never go above 50c. If you are doing an OC setup you probably will need to tune things a bit more and will probably see higher temps even with the stock water cool (i'd recommend getting the longer radiator water cool if you stick with closed loop as this water cooler is nice and looks neat with the lit FX symbol it doesn't really keep up with OC settings).

Cons: For the reports of loud fans, yes these fans are loud when you first install, that is because the fan control software (which is plugged into your onboard USB headers) does not kick in until you install the software. So on new builds its loud as all get out until you install the AMD chill software. After you do this you can set the liquid temperature that controls how much the fans spin up. I have mine set to spin up to full once the liquid temp gets to 45c which typically keeps my cpu under 50 on full load at stock speeds with turbo enabled. For those not getting boot ups or not getting full clock speeds it is probably because the MOBO does not support the 220watt power draw these pocessors use and most likely underclock the CPU to something it does support which is probably the equivalent of an 8150. I bought this CPU with a verfied to work with motherboard (the Asrock 990FX Extreme9). If you are just wanting to upgrade a CPU and not both CPU and MOBO then you might want to get the 8350 unless you have a motherboard that can actually support a CPU that has a 220watt power draw or can be verified to work with a bios update.

Overall Review: I personally ran into some Overclocking issues. Research suggests that the parts that are stock 4.7/5.0 turbo are top bin parts able to work at those frequencies and the 9370 are going to be the procesors that didn't quite cut it at those speeds. My computer is plenty fast without the added bump in speed so it doesn't break my heart any.