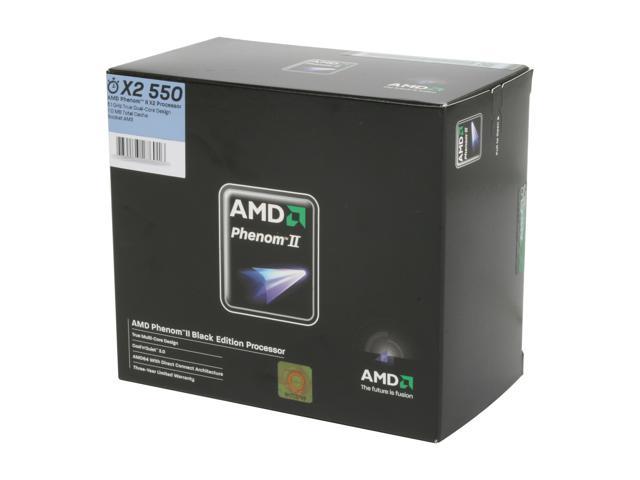 (868) Write a Review
See more "amd phenom"
OUT OF STOCK.
Overview
Specs
Reviews
Like the superheroes of old, the AMD Phenom II streaks out of the night to lay waste to your enemies with 3.1GHz dual cores, each of which has L1 and L2 caches. An additional 6MB of L3 cache is available to handle really heavy loads or large data sets.
Memory transfers get faster than ever. HyperTransport Generation 3.0 mode allows up to 16.0GB/s of bandwidth. Up to 17.1GB/s memory bandwidth for DDR2 delivers an amazing 37GB/s of processor-to-system bandwidth. This unprecedented bandwidth is needed to feed the data hungry AMD64 with Direct Connect Architecture cores.
You'd think that all of this power would be too hot to handle. Think again. AMD's Cool'n'Quiet 3.0 technology works with CoolCore Technology to minimize heat while keeping power and efficiency up. Now the cores can shut down unused parts of the processor when not in use. This saves power and helps to reduce the amount of heat generated. This function is built in so there's no need for drivers or BIOS updates.

Cons: No amount of extra voltage seems to help it get to 4.0ghz, but that's pretty normal for these cores. I'm still happy with 3.8ghz.

Overall Review: Because the setup is so flexible and I'm able to run my RAM faster, it actually beats out my Core 2 Duo E8400 at 3.6ghz in Cinebench rendering, among other things.

Pros: Just thought I'd update now that I've had this CPU for about a month. Still running rock solid 24/7 at 3.8ghz just by simply having the multiplier at 19. Vcore is at 1.40v.

Cons: Only thing I can say is it idles warm, about 42c. But then again with a 20% overclock what can you expect? On the stock cooler no less, not really much of a con...which is why is still gets 5 eggs! Not sure what it idles at stock speeds, don't care to find out either haha.

Pros: This processor runs cool and stable, and is a great canidate for overclocking. Even if you don't plan on overclocking, this is still a great processor. I really like the fact that AMD is willing to sell Black Editions of processors like this, instead of reserving it for just the top-end quad models. A great way to get into a new Socket AM3 system that should have plenty of future upgradability (as opposed to Socket AM2+ and LGA 775 which are in their twilight days). As with all other Socket AM3 chips, this one includes AMD's virtualization support. At the current price, it is an absolute steal.

Cons: You'll probably want a different heatsink and fan than the included one. The included one is adequate, but looks just like the one from my old Athlon XP.

Overall Review: AMD should release some more dual-core AM3 chips, as this one is a winner. Don't be scared by the lack of currently available Socket AM3 coolers, as any Socket AM2/AM2+ cooler is 100% compatible with Socket AM3.

Pros: Very nice upgrade to my system, plugged this in and up everything came and it's running an my AM2+ Motherboard with no issues. My CAD programs rung better and faster.

Cons: Though this is a great upgrade the deference between the Phenom II X2 550 and my older Athlon 64 X2 6000+ on regular tasks (Word Processor, email, spread sheet, etc.) is minimal but when you start doing some hefty gaming or CAD applications you really see the deference in speed and stability; so money well spent.

Pros: Cheap Speed, even running at default settings this is a good deal. This is a steal when you unlock all 4 cores and only have to raise voltage .05 to get a stable 4.1 ghz on air.

Overall Review: I purchased this with a GIGABYTE GA-MA790X-UD4P. Using Gigabyte's hybrid bios setting I set ACC on and rebooted. It was a big surprise to me that all 4 cores booted much less load tested. Then being able to over clock those 4 cores to 4.1 with just minor voltage adjustments was a shocker. Best deal of the year for me.

Pros: Screaming fast (3.1ghz out of the box and easily clocks to 3.8+ on air) Most unlock to a rock-solid quad core B50 (mine did) giving you a full-blown black edition 955 on the cheap. Fast enough even at stock speeds but still easily O/C'ed. Nice power usage, low heat. Plugs into tons of legacy boards for a cheap upgrade. Easily the best performance for your dollar even if it doesn't unlock to a quad. It's no I7, but considering building an AMD PC around the 550BE is less then half as expensive as the most cheaply built I7 machine for 90% of the performance on things that matter - I think I'll stick with AMD for now. Who cares if an I7 unzips a file in 2:28 vs a 550BE at 2:42? When you're getting above 60FPS in virtually any game at max settings it just plain doesn't matter that someone might be getting 5 fps more.

Overall Review: This is the absolute budget KING for building a top-notch computer or gaming rig. Snatch a good unlock-capable motherboard (under 100$), add 4 gigs of ram (50 bucks), toss in a good video card or two (100-220$) then re-use your existing computer's drives etc (add another 50$ for a power supply if yours can't handle crossfire). Poof, high-scoring framerate's at top quality settings across the board on every game known to man and you didn't even crack 500$. Sure, an I7 loaded to the gills will encode a DVD 30 seconds quicker - at roughly 500-1000$ more. It's a no brainer in an HTPC as well, buy it bundled with a 785G motherboard for on-board HD (pick up GIGABYTE|GA-MA785GM-US2H, it's micro atx, low profile, and unlocks cores). Full 1080P HD right ouf of the box fully blue-ray capable, plus it can cut through any moderate gaming like butter (WOW, anything source engine, sims 3, etc) on the 785G integrated graphics core. Did I mention a bundle like this runs in the 150$ range? Budget K

Pros: @ Aproximately $100 this processor is an absolute steal! I paired mine with a GigaByte-MA770T-UD3P Motherboard with the updated F2C Bios & was able to unlock the 2 extra cores without so much as a hiccup; however, even with the standard two cores, this little monster can eat anything thrown at it for breakfast, and will ask for seconds.. I would imagine that as production moves along with theses chips, processors from other manufacturing runs won't be as core-unlock-friendly (but this is only speculation). So grab one while they're hot.. With the unlocked multiplier I have been able to run mine @ 3800ghz (all four cores) @ 1.40v stable, with the manufactures HSF on my 1st attempt; however, overclocking the chips isn't really necessary. Pros: potential to unlock the 2 extra cores 2MB L2 & 6 MB L3 Cache Zero-buyers remorse Incredible price / Value ratio CPU is a processing power-house

Overall Review: New system: Phenom II X2 550 - 4gb DDR3-1600 CL7- Radeon 4830 Processor AMD Phenom(tm) II X4 B50 Processor 7.3 Memory (RAM) 4.00 GB 7.5 Graphics ATI Radeon HD 4800 Series 7.3 OS Windows 7 x64 build 7232 Noticeable improvements in all processor heavy operations Runs Windows 7 x64 like a champ Crysis / Crysis Warhead Runs like a champ on "Enthusiast" settings in DX10 Audio sequencing software (Cubase, VST, etc) it eats for breakfast.. AMD Cool and quiet technology works great. Please consider this: It is my understanding that the Phenom II memory controller will limit RAM bandwidth to DDR3-800 when using more than two DDR3 memory modules. Keep this in mind when purchasing RAM; however, 2 sticks will run @ any speed your motherboard allows. I read this on the OCZ forums and haven't confirmed this as fact yet. Look into this while planning your system.

Overall Review: Was able to unlock all 4 cores using a Gigabyte GA-MA790X-UD4P and Hybrid BIOS. Has passed testing with AMD Overdrive@ 6 hrs, Cinebench, KribiBench, 3DMArk06, and SuperPI 2 million. As would be expected, temps went up after unlocking all cores, so an aftermarket HSF should be used. Also, remember that not every chip may unlock and be stable. The cores are locked for different reasons. Some had bad caches, while others fail calculation tests, and some ran too hot with stock HSF. Keep this in mind. All in all, you really cant lose with this. You either get a high clocking dual core or a very good quad core.