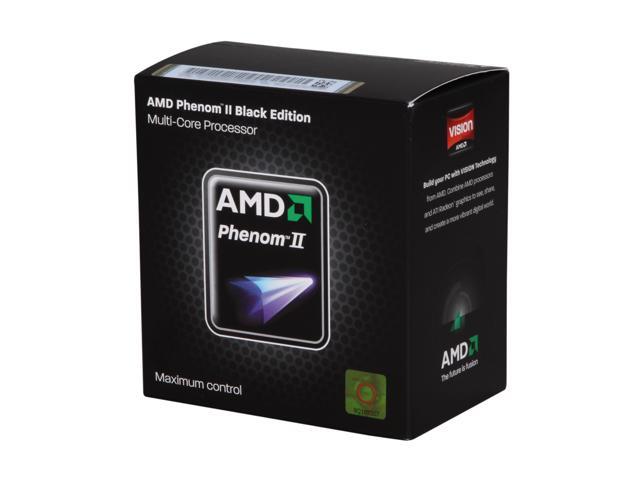 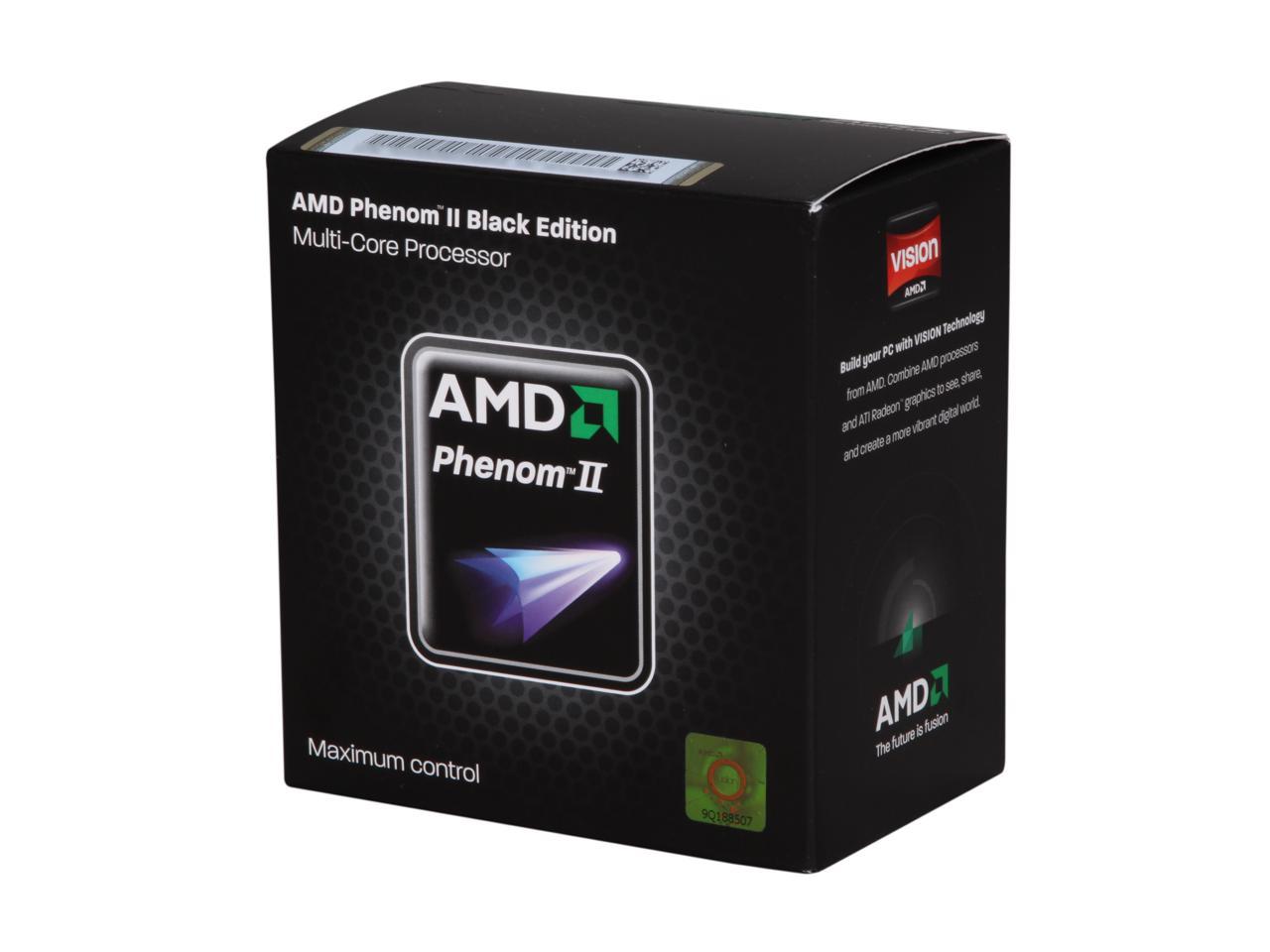 (1,261) Write a Review
See more "am3 processor"
OUT OF STOCK.
Overview
Specs
Reviews
Experience a new world of dual-core computing with the AMD Phenom II X2 555. Every aspect of this processor was designed with speed and energy efficiency in mind. AMD64 with Direct Connect Architecture and 45nm technology has created a tuned processing pipeline that helps keep your system performing at the highest levels. HyperTransport Technology provides up to 16.0GB/s bandwidth to reduce system bottlenecks and AMD Balanced Smart Cache ensures quick access times to highly used data.
Energy efficiency is important to AMD, allowing you to enjoy a cool, quiet PC while saving energy and reducing heat, noise and the effect of your computer on the environment. Energy efficiency innovations include Cool’n’Quiet and AMD CoolCore. These technologies reduce power consumption and processor activity.
AMD Phenom II processors also offer support for Virtualization Technology. You can run virtual environments on one system with ease, allowing you to use legacy programs on a separate operating system. Add the convenience and power of multi-core processing and enjoy the benefits of energy efficiency with an AMD Phenom II X2 555 today!

Carlos A.
Ownership: 1 month to 1 year

Pros: AMD just can't be beat for the price vs performance comparison. This CPU just gets it weather you use it stock or unlock it. You cant go wrong.

Cons: This is my second one of these, was lucky enough to unlock the first one but not this one. That being said I don't blame the CPU, I blame the low-mid range motherboard it went into. More of a disappointment than a con so no eggs taken away.

Overall Review: Even though I was not able to unlock this one its still blazing fast running at stock speeds. Have not tried overclocking it but then again I really never overclock my CPU's, never felt the need to but I will unlock them any chance I get. You will not go wrong buying this one.

Overall Review: I've been trying to overclock since I bought a Celeron 450Mhz in 1998, followed by a P3 750Mhz and a P4 2.8Ghz. No go. Too much heat for too little or no gain. The P4 was really getting long in the tooth (7 years old) and I really couldn't afford the couple of hundred $ extra a SB build would cost so I thought WTH, I'll get this cheap chip and an AM3+ MB and see how it goes. Given that I don't game (just multi-task like a fiend) I had nothing to lose. With an Asrock 890GX Pro3 MB this unlocked to 4 stable cores on the first try. Got to 3.7 on stock cooling and vcore easily and won't go farther, although I have a Xig s1283 cooler now. Possibly my generic Crucial 1333 RAM is holding it back but what's a couple of hundred Mhz between friends? ;) Highly recommended if you are more concerned with value than benchmarks. Love this chip. Love the 890GX chipset. Can't wait for Bulldozer. Bring it on!

Anthony B.
Ownership: more than 1 year

Cons: Not a hard con but the unlocked cores were unstable on mine. Such is life of the silicon lottery. Is not good for streaming on Twitch.

Overall Review: Has no problem with gaming in 2014. Even Heroes of the Storm runs great. Unfortunately it isn't a good cpu for streaming on Twitch. The stream is very choppy and fiddling with settings made no difference. Unlocking the cpu made my stream very smooth for about 10 minutes until my computer rebooted. This is still a great cpu.

Pros: I have used this processors predecessor, the 550, and now the 555 in multiple builds. In each and every case it has performed fantastically. Very easy and "almost" guaranteed overclock to 3.8GHz in most situations. Able to get it to 4.0GHz in some cases. Chance at an unlock to a triple or quad core, though not to be expected, and not nearly the success rates as the original 550's since they were binned 955's. However the chance is still there.

Pros: Black Edition as shown in product pic, but not specified in the product description on newegg. Latest and greatest RC-3 from AMD Potential to unlock multiplier for OC'ing. Potential to unlock 2 extra cores to 4 total cores on mobo with SB710/SB750. Best bang for the buck if you are a tweaker.

Overall Review: The stock heat sink has no copper/copper pipes. Seek aftermarket CPU cooler if you plan on OC'ing or unlocking the extra two cores.

Pros: Though I did not purchase through Newegg, I'm a Newegg fan and would like to give fellow techs a heads up on what they are buying. These are x4 955 Black Editions with 2 cores disabled and 2 core sensors removed. The newest batches that have came out within the last 4-5 months have have some very high unlock rates; Most being perfectly normal x4s with x2 stickers and cores that just need an unlocking motherboard (literally; AMD's way of making more money) - That being said, there is a chance you will not get these unlocked and through multiple reviews the odds are about 7:1, Meaning out of every 8 processors, 7 can be successfully unlocked with little to no hassle. That also being said, if you plan to extremely overclock these on all 4 cores, this is NOT the option. 2; certainly but not 4 as overclocking requires more voltage on the disabled cores which may or may not require more voltage at stock speeds. If you plan to overclock to the extreme (as in 4.2ghz+), invest in the 955.

Overall Review: Unlocked *easily* to x4 and running all 4 cores @ 4ghz; 1.52 vcore; 6 hours of prime95 stable. Yes, this is amazing being an x2 processor sold at nearly half the price of the 955s. Unfortunately I have a 955 to compare and it reaches this same overclock @ only 1.42 vcore. My friends 955 manages to reach 4.2 ghz stable at 1.55 volts; This processor cannot even boot at 4.2. This is why my overclocking comments were above; Running this thing between 3.6 and 3.8 is perfectly reasonable and an ease to do. 4ghz+ is where you start to lose it in terms of voltages and *especially* temps that follow, while on the other hand, the 955 can keep up, given more reasonable voltages. Overall, this processor is a *steal* for even the most hardcore gamers. If you are into extreme overclocking and/or benching, this it NOT the choice for you. I hope this review helped people and thanks again Newegg for just being here to share my experience.

Pros: - Fastest AMD Duel Core around! - Can overclock to 3.8Ghz without passing stock voltage! - Unlocked multiplier - AM3 = Backward compatibility + future upgradability - Can use ddr2 AND ddr3 on different MB - Price, although it's 10+ bucks more than it's brother Ph II X2 550, the unlocked multiplier and extra frequency does worth it!

Cons: None! P.S. Taking away eggs based on locked/Defected cores or comparatively low O.C ability is not fair and unethical. You bought it based on stock specs so anything beyond that line is just added bonus!

Overall Review: Stock heat sink is not powerful enough if you plan to overclock or unlock. It comes with a 70mm X 70mm X 25mm fan. - Seriously if you do not consider unlocking and Overclocking, Ph II x2 550 gives you a better price/performance - Unlocked on my ASUS M4A785TD-M EVO AUTOMATICALLY!! After first boot MB just auto restart and on the second time, on post screen it wrote ***** 4 Cores Successfully Unlocked ***** - Checked each individual cores and all worked fine. - Used an aftermarket heat sink + Arctic MX-3 to overclock the unlocked quad to 3.8Ghz and WEI gives it a 7.4!! - Didn't try to push it to 4ghz yet but I'm sure with some tweaking it should not be a problem, even on air. Even if it did not unlock other cores, and with stock frequency it's still a very powerful CPU and could do any task you throw at it.

Pros: Great processor, Cheap price. I was able to unlock all four cores on an Asrock AM3+ 970 Extreme 4. Great performance.

Cons: Bent pin. More than likely is was a human error rather than the manufacturer. So no eggs off for that.

Overall Review: When I started to build my computer my MB wouldn't post. So I assumed it was the mobo. I RMD's it. 2 weeks later got the replacement. Still same problem. My brother looked at the CPU come to find out there was a bent pin on it. He straightened it out. Now everything runs smoothly. So I lost money for RMA a possibly good Motherboard because a bent pin in the CPU that we over looked. So watch for that guys.