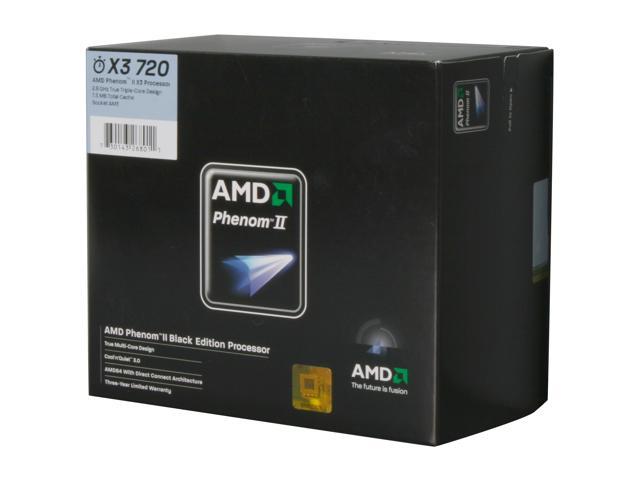 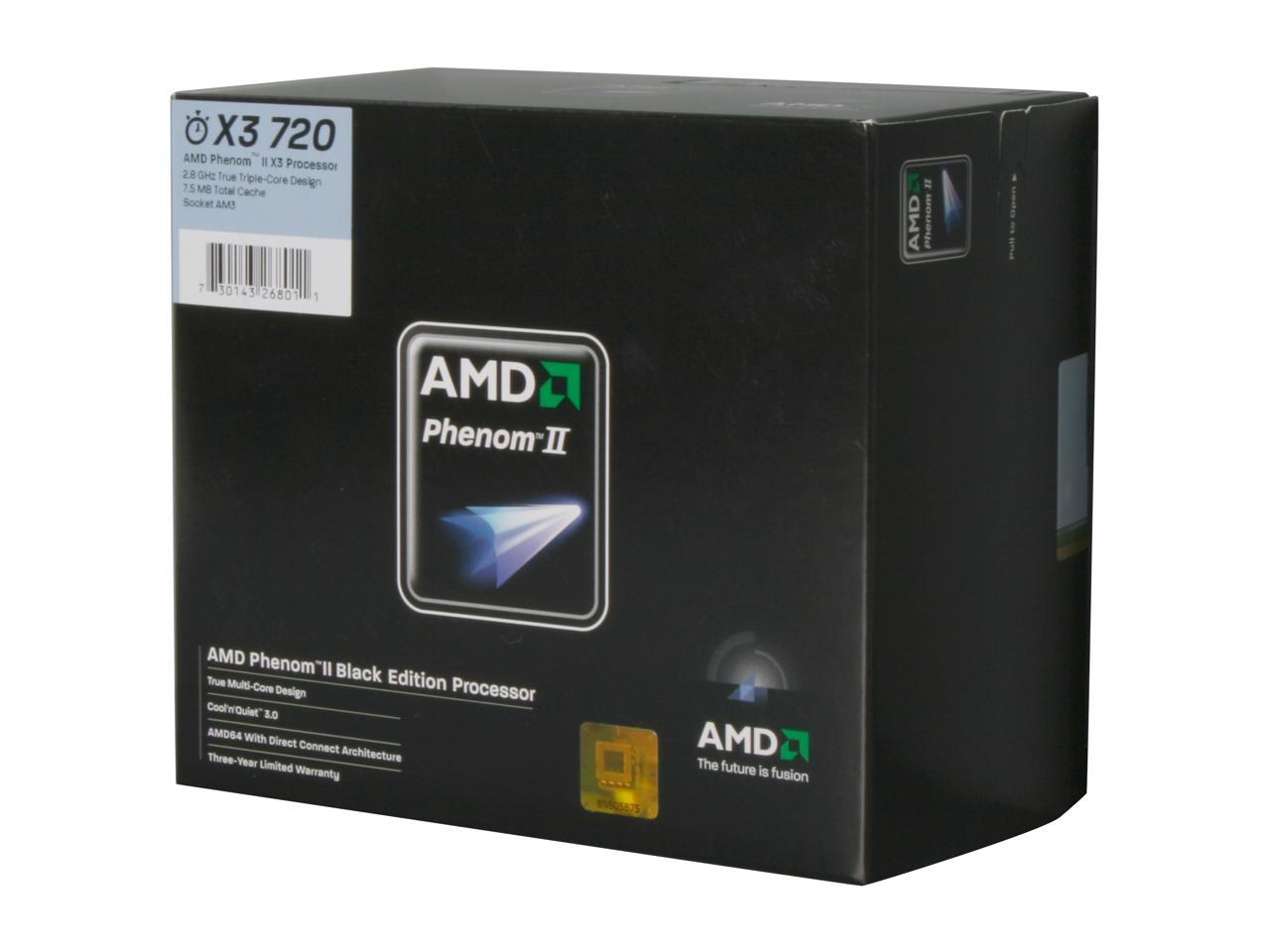 (969) Write a Review
See more "am3 cpu"
OUT OF STOCK.
Overview
Specs
Reviews
Like the superheroes of old, the AMD Phenom II streaks out of the night to lay waste to your enemies with three 2.8GHz cores having L1 and L2 caches for each core and 6MB of L3 cache to be shared to handle really heavy loads or large data sets.
Memory transfers get faster than ever. HyperTransport Generation 3.0 mode allows up to 16.0GB/s of bandwidth. Up to 17.1GB/s memory bandwidth for DDR2 and up to 21GB/s memory bandwidth for DDR3 memory controller delivers an amazing 37GB/s of processor-to-system bandwidth. This unprecedented bandwidth is needed to feed the data hungry AMD64 with Direct Connect Architecture cores.
You'd think that all of this power would be too hot to handle. Think again. AMD's Cool'n'Quiet 3.0 technology works with CoolCore Technology to minimize heat while keeping power and efficiency up. Now the cores can shut down unused parts of the processor when not in use. This saves power and helps to reduce the amount of heat generated. This function is built in so there's no need for drivers or BIOS updates.

Pros: Any fourth core can be unlocked if you have a bios that will allow it, simply setting ACC to on in your bios you can test it out. Yes the fourth core can be defective but there are people running theirs stable @ 4.0 Ghz unlocked on all four cores. And it does not matter what batch cpu you get, all that matters is if you get a functional core. So to all the "noobs" saying no amount of modding or hacking will allow it. AMD confirmed it and is making Mobo Manufactures update the bios so it can't be done. You can still downgrade your bios and unlock it though and who is to say no one is going to have modded bios to do so.

Cons: Nothing This chip, is amazing having 3 cores @ 4.0ghz if you luck out and get a good fourth core, you will save so much cash. Even though the fourth core/third core are useless in some games and you only gain a small FPS increase.

Pros: This is a cool running CPU. Overclocked its 40C at idle and 55C under load WITH THE Zalman 9700 NOT EVEN PUSHING 60% RPM! I guess I could probably lower the Smart Fan temperature down, but its running fine where it is! It also overclocks very nicely. I am @ 3.5 gHz & 1.475v on an Nforce MB! The IPC on these Phenom IIs are great. Excellent upgrade from X2 and Phenom with no MB cost if you have an AM2+ MB. VERY VERY VERY inexpensive for the performance it delivers. Unlocked multiplier for under $200 make for easy overclocking. You don't have to spend $1000 like on Intel for this feature. Haven't used it yet, but ACC program is awesome, from what I have read and makes overclocking a breeze! DDR2 and DDR3 memory controller give you upgrade options for all budgets!

Cons: Its not a quad core.

Overall Review: Hidden in this faulty core X4 is a BEAST! More cache per core than X4! It is a super value oriented enthusiast piece. I am getting an AMD 790GX/SB750 MB so I will probably get better overclocking. I truly feel that this is the best performance per dollar CPU out right now! It is unfortunate its not a AM3 quad core, but for the investment I am more than happy. BUY THIS NOW! Unless you can afford a Core i7! Competition is back and its reflecting the CPU pricing. So all you Intel fanboys thank the lord for AMDs return to competition cause your C2Q's are cheaper!

Pros: Drop in Upgrade for my X2 5000 DDR2 and DDR3 capable processor Allows me to do a little upgrade at a time

Cons: Included heat sink is small if you wish to overclock

Overall Review: This was a simple upgrade for my X2 5000+ and it worked in my old AM2 motherboard. I will upgrade to AM3 and DDR 3 in the future. CPU works with my old DDR2 800 and will run DDR3.

Pros: runs extremely cool, nothing ive trown at it slows it down all i can wtg AMD for the price this is a steal!!

Overall Review: I paired this up with the new gigabyte ddr3 motherboard MA790xt-ud4p and 2x2gb g-skill dual channel 1333 ram and 4870 512mb saphire and it rocks,

Cons: included cooler is even smaller than the old stock ones (about the same size as the old XP heatsinks), although it does run significantly cooler than any other AMD chip I have owned. The heatsink will be fine for normal use and minimal overclocking. I would just like to see the heatpiped version to come with the Black Edition.

Overall Review: I performed a comprehensive review between this 720 an my old brisbane (even downclocked the 720 to make an exact clock for clock comparison, so then others could see about how much better this is than their old dual core). The 720 BE was about 15% faster in most applications than the X2 (single threaded of course). The 720 also outperformed the overclocked dual core, while it was UNDERclocked at 2.4GHz in 3dMark06 (scored 11490). So if you're thinking about getting one of these, it seems to hit the sweet spot for price and performance. It has three cores for the times when you're multitasking, and does quite well in games, generally outperforming the intel dual cores. It makes a great upgrade for anyone with an older AM2 board (as long as the BIOS will support it).

Overall Review: This CPU is great. put it right in the Biostar. Also, enabled 4th core. OCed to 3.34GHz no problems. Great operation. AMD Overdrive Utility is spectacular. But: DO NOT BUY ONE THINKING YOU WILL GET A 4TH CORE GUARANTEED. AMD had to be failing some of them for a reason. I got lucky. You may not.

Pros: Using this in an HTPC (Overkill, I know...) But having the three cores allows me to multitask like crazy. I can watch one movie (with the processor upscaling the movie to 1080) while another program rips one of my dvds to a mkv or avi file in the background. And there's never a hint of stutter. Simple overclock to 3.4 with a couple button presses in the bios. Thought I'd come back later and tweak more to see how high it'd go, but truth is I haven't got around to it, cause I've never felt the need. Plug in a controller and get a good video card, and you can play most any game you want. All WHILE running tasks in the background. (Most games right now only utilize 2 cores at most, leaving the third wide open for whatever you want the pc to do while you're playing. Productivity!)

Cons: Defective fourth core on mine, so I couldn't unlock it. If you can call getting exactly what you were promised and paid for (triple core) a con. Not sure how much a fourth core would help my purposes anyway outside of benchmarking programs (I don't think I use anything that can utilize four cores, and even I don't ask my PC to multitask THAT much.) But I don't like leaving comment spaces empty.