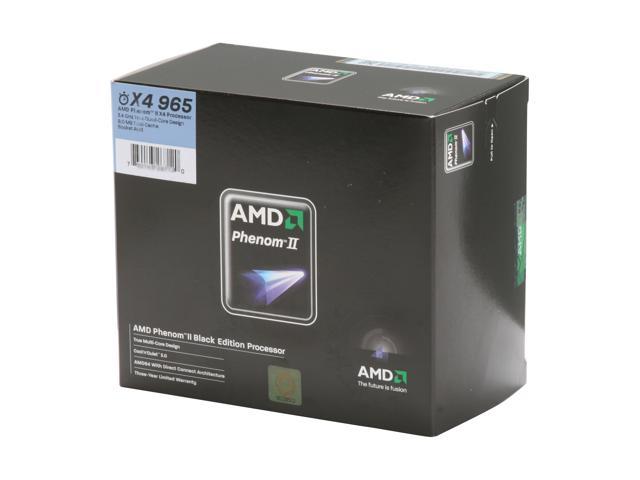 (298) Write a Review
OUT OF STOCK.
Overview
Specs
Reviews
Experience a new world of quad-core computing with the AMD Phenom II X4 965. Every aspect of this processor was designed with speed and energy efficiency in mind. Using the AMD64 Direct Connect Architecture, application performance is dramatically increased while reducing memory latency. The HyperTransport Technology can provide up to 16.0GB/s bandwidth to reduce system bottlenecks and the Balanced Smart Cache ensures quick access times to highly used data.
Energy efficiency is important to AMD, allowing you to enjoy a cool, quiet PC while saving energy and reducing heat, noise and the effect of your computer on the environment. Energy efficiency innovations include Cool’n’Quiet and AMD CoolCore. These technologies reduce power consumption and processor activity.
AMD Phenom II processors also offer support for Virtualization Technology. You can run virtual environments on one system with ease, allowing you to use legacy programs on a separate operating system. Add the convenience and power of multi-core processing and enjoy the benefits of energy efficiency with an AMD Phenom II X4 965 today!

Pros: Wow, I am totally blown away by the performance of this chip. I cannot seem to find ANYTHING that will slow it down. Run the Sims 2, Photoshop, Disk Defrag and surf the internet at the same time (don't ask) - no problem! Multi-tasking is very important to me and the processor handles multiple intense processes very well. I had high-hopes going into this and it has exceeded all my expectations. It is an EXCELLENT value too! Good job, AMD - I highly recommend this chip to anyone who wants high-performance.

Cons: Nothing, this chip has been fantastic.

Pros: Amazingly fast CPU. I don't do too many intensive CPU tasks, but I occasionally do video encoding and I love Flight Sim X, so I knew I wanted a CPU that came with high stock cores since I have no experience overclocking. This CPU does everything I want it to do. Flight Sim X runs at 30fps with all settings max and traffic on medium low. Sometimes drops below that in cities like NYC, but never below 20, which is still amazingly playable. Besides, no consumer CPU can run FSX with everything maxed.

Cons: Can't think of any.

Overall Review: I'm not sure why people see the 140w TDP as a con. That's what it takes to get 3.4ghz steady. If you don't want 140w TDP, settle for slower speeds!

Pros: Great chip. I have never been on a computer this fast before. I highly recomend it.

Cons: None so far other then it should have a higher speed ram compatibility. But I gues that's what Ocing is for on the 790fx

Pros: It's AMD and fast as ever, paired with lots of RAM and a WD Raptor drive it will go faster than you could ever imagine. Stock fan is fine as long as you're not OC'ing.

Overall Review: I have been very happy for many years with AMD. This is yet another reason I will remain a loyal customer.

Pros: Fast. VERY fast. I've plugged this into my new MSI 790FX-GD70 mobo with Patriot 2000 (PC3-16000) and OCed it to 3.75ghz. I could have gone more I'm sure, but I'm quite shy of OCing too much as I've shortend the life of my prior CPU by doing so. This CPU is so fast though that it just isn't necessary. I'm a gamer and in a game I was beta testing I was getting around 10fps in a badly optimized area. Without upgrading the video and only replacing the mobo, CPU and ram, my frames jumped to 35 in this same area. In open areas it went from 45fps to 162fps...no joke. And one additional tid-bit, although very important. I watched all four cores on this thing running 20-40% utilization in this game I was playing. (sorry I can't mention what it was as the NDA has not been lifted, but it is seriously graphics intensive). On my old Athlon chip, only one core was in use. I was very happy to see the distributed load that this "True Core" design provided.

Overall Review: I have this bad boy water-cooled because those 140 watts will generate some heat. It runs steady at 41c and 48c under heavy load. I can't tell you what it will run on air-cool. I also have two ATI 4890s on order so that should finish off this system for some high-end gaming.

Pros: Great value for the price. The 140 watt 965 Deneb @ 3.4 GHZ runs 64-bit Windows 7 Pro admirably (with 8 GB RAM). Noticable difference between this and the 95 watt 945 Deneb at 3.0 GHz, although both are fine processors for their class. If the CPU fan runs loud like another user stated, try enabling the motherboard fan control in the BIOS (ASUS M4A78T-E used). Mine initialized at around 5800 RPM and was loud. I set the fan control to the MB in the BIOS and speed dropped to around 2900 RPM, maintaining a temp of about 104 degrees F. (In a Antec 900 case w/ multiple fans), using the stock heatsink supplied.

Overall Review: In the processor wars, there are pros and cons to both Intel and AMD. I was a fan of Intel for many years, but side by side Real-World usage for servers and workstations has proven that there really isn't a performance difference. To notice that, you have to start getting into special-purpose applications. For the money, go AMD. For the name, go Intel.

Pros: Core Multiplier unlocked. Stock cooler is great compared to other stock coolers. Got it up to 3.7GHz with just altering the core frequency, not even touching the core multiplier. Never has gotten above 50C yet.

Overall Review: More than enough power if you are a gamer. Who really needs to pay that much more for an i7 that only gives an extra 10 fps. With a XFX 4890 this will run at 40min and average in the 40-50 range in Crysis. Once you hit 30fps or above there is barely any difference. Also Resident Evil 5 runs at 35min 50avg with same rig on DX10.

Pros: This thing is smoking fast and I did not notice any difference in temps coming from my Phenom II 940 BE. This things just pops stuff on my screen as soon as I click on it.

Overall Review: I know the rivalry of Intel vs AMD but I established myself as an AMD person many moons ago. You just cannot beat the performance vs price ratio here. This thing is fast. Vista doesnt even get a chance to load its little animation before the CPU just sweeps on by. Updated the BIOS on my Asus m3n-ht and I am off to the races. Came from a Phenom II 940 BE and there is a noticeable difference. No complaints here.