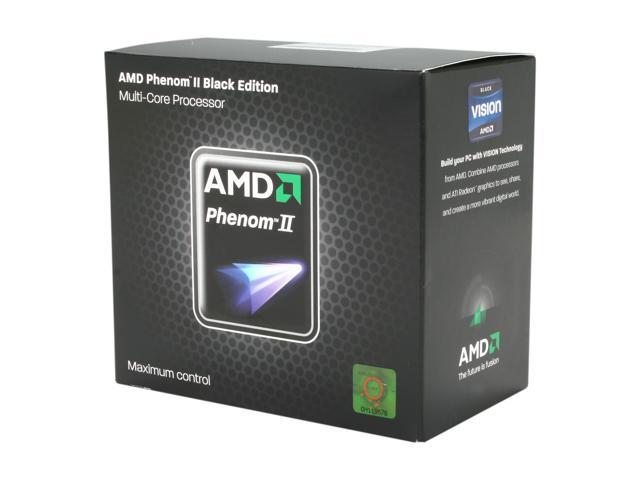 (294) Write a Review
OUT OF STOCK.
Overview
Specs
Reviews
Enjoy unbeatable multi-core value and ultimate high definition entertainment with the AMD Phenom II X4 970 Black Edition. Save time and accomplish more with true multi-core processing that makes multitasking quick and simple. AMD64 with Direct Connect Architecture and 45nm technology has created a tuned processing pipeline that helps keep your system performing at the highest levels. HyperTransport technology provides up to 16.0GB/s bandwidth to reduce system bottlenecks and AMD Balanced Smart Cache ensures quick access times to highly used data.
Energy efficiency is important to AMD, allowing you to enjoy a cool, quiet PC while saving energy and reducing heat, noise and the effect of your computer on the environment. Energy efficiency innovations include Cool’n’Quiet and AMD CoolCore, which reduce power consumption by balancing the processor activity, letting you enjoy environmentally friendly, energy-efficient performance.
AMD Phenom II processors also offer support for Virtualization Technology. You can run virtual environments on one system with ease, allowing you to use legacy programs on a separate operating system. Add the convenience and power of multi-core processing and enjoy the benefits of energy efficiency with an AMD Phenom II X4 970 Black Edition today!

Pros: AMD has always provided a lot of bang for the buck for us overclockers and this chip is no exception. If you already have a 950-965, I wouldn't bother upgrading anything at least until Bulldozer comes out next year. But for those putting together a new machine, go for this chip as it is worth the few extra dollars.

Overall Review: Unless you are mainly running apps that can take advantage of more than 4 cores, this is actually a better buy than AMD's X6 series. It is cheaper and will match if not outperform even the 1090. And don't let the Intel fanbois get to you; dollar for dollar Intel doesn't have anything that can compete with it. If you need more computing power, go with Intel and pay the extra money. But for the vast majority of us, this CPU is more than powerful enough.

Pros: Extremely easy to setup and configure. Ran AMD overdrive to test out maximum configuration speed. She is runnin like a champ at 3.9 ghz maintaining at full load around 48C.

Cons: Nothing, should of bought this one first!

Overall Review: If you want the fasted stock clocked Phenom II at the moment without having to overclock. Then this is it. You can get pretty much the same overclock with a lower 955 or so CPU, but you need a better heat sync to overclock that bad boy. This one it is not required, just runs solid at 3.5ghz. So for the same price of you buying the cheaper chip and a large heat sync, you can just have the speed without the worries.

Overall Review: I used the Crosshair iv Formula to oc this baby to 4.2GHz and surprisingly the stock cooler held its ground at 45 degrees celsius. Not bad if you ask me, but I'm not gonna push it further. I'm really glad I didn't go for the 1090T cause most games don't NEED 6 cores. And just when I was about to grab the 965..........TA-DA. The 970 appeared and dethroned him as the fastest AMD Quad core available.

Pros: best gaming cpu in terms of price/performance stable, no compatibity issues plays old and new games without a hitch

Cons: not as fast as some of the intel cpu (which are way more expensive)

Overall Review: not as fast as some of the intel cpu's but, considering its price, its the choice for the price conscious (or unemployed) gamer

Pros: Straight out of the box easily overclockable with no issues (outside of the standard fair). Never even ran it stock - currently running at 4.1Ghz on all 4 cores with no issues (20.5x multiplier, 2600mhz NB, 1.488v). Idling at around 28c and 38c full load thanks to the Hyper 212 Plus CPU cooler. Definitely recommend for a gaming PC on a budget.

Cons: I wouldn't recommend overclocking on the stock heatsink that comes with it. Might be ok for stock speeds, but other than that it looks almost useless.

Overall Review: Checked a ton of reviews and benchmarks on this CPU - I personally purchased and would recommend this over the 1090t (even the 1100t - i find no point in turbo boost on CPUs you're going to overclock anyway since most people will disable that function and max out the clock speeds to something stable) for gaming, especially if you plan on overclocking. It's marginally better and costs less. Thats a win. Last thing - CPU easily overclocks to 4.3Ghz, I just haven't checked the stability yet, it's on my to do list.

Pros: Rock solid dosen't get over 42 @ full load. A quieter fan would have gotten this thing it's 5th egg.

Overall Review: spend some $ on a quieter fan

Cons: -Stock heatsink fan is VERY loud, but you should be replacing this anyway.

Overall Review: This is an amazing CPU, one of the best bangs for your buck. When I bought it, I was deciding on this or one of the new 6 cores. However, I use it mostly for gaming, and since almost no games will take advantage of 6 cores, I decided I'd rather have a quad core with a higher clock speed than a 6 core with a lower one. Overclocking on this thing is a dream. It's merely a matter of increasing the multiplier, and then increasing the voltage. I was able to hit about 3.8 on stock cooling before it got too hot, and then with a Zalmann cooler I'm hitting 4.1 Idle temp is ~31 and under load it's ~49. Just an fyi, AMD says the 62 degrees is the max safe temperature on this CPU, and that you should be safe taking voltage up to 1.55. I'm sitting at 1.5 because I'm not sure if I want to risk it or not. System Specs: Antec 900 Case Asus M4A79XTD EVO AM3 Mobo MSI GTX 460 1GB Hawk (920/1840/2200 OC) AMD Phenom II 970 BE X4 (4.1 OC) 4gb G.SKill PC 1600 Raidmax 630w PSU Zalman CNPS9900M

Pros: I thought Id do another review on this processor now that I have some time in on it. I am going to do a review and post my findings with some games. I dont have exact numbers for frame rate but I want to explain what I experiance.

Cons: Really none so far.

Overall Review: I am able to get it to 4.3 Ghz using AMD Overdrive on air stable. I now have liquid on it but have not tried to OC again. Battlefield 3 plays flawlessly on this CPU with 1600x900 and all settings on Ultra. Crysis also plays flawless. I did however find that BF3 the cpu plays cooler than BF2. Werid. I havent had any issues with any game. I have this paired up with a ATI 6870 and a Gigabyte 970 chipset board. There is no good or bad chip. I like Intel and I like AMD. They both have a great product. AMD seems to have a chip that specializes in one area. This one loves games to death. I game 90 percent of the time and this was a great cheap alternative to Intel. I recommend this highly. Ive built alot of computers in my time. I have used AMD more than intel. I can say I was really impressed with Intels Core 2 Quad specially the one I had. I decided to try AMD again. This CPU is a great upgrade from my 9450 c2q.