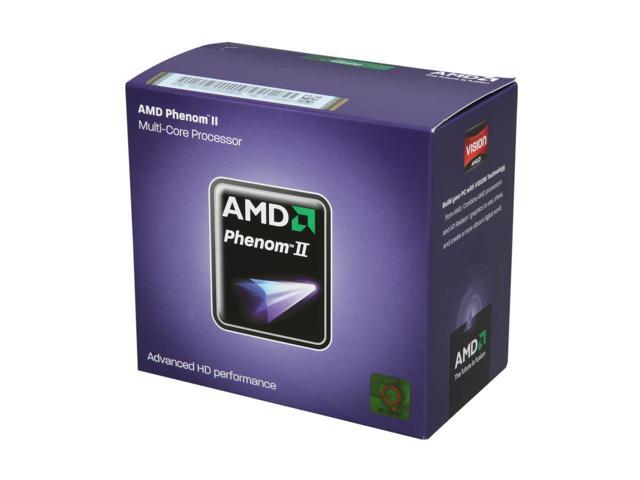 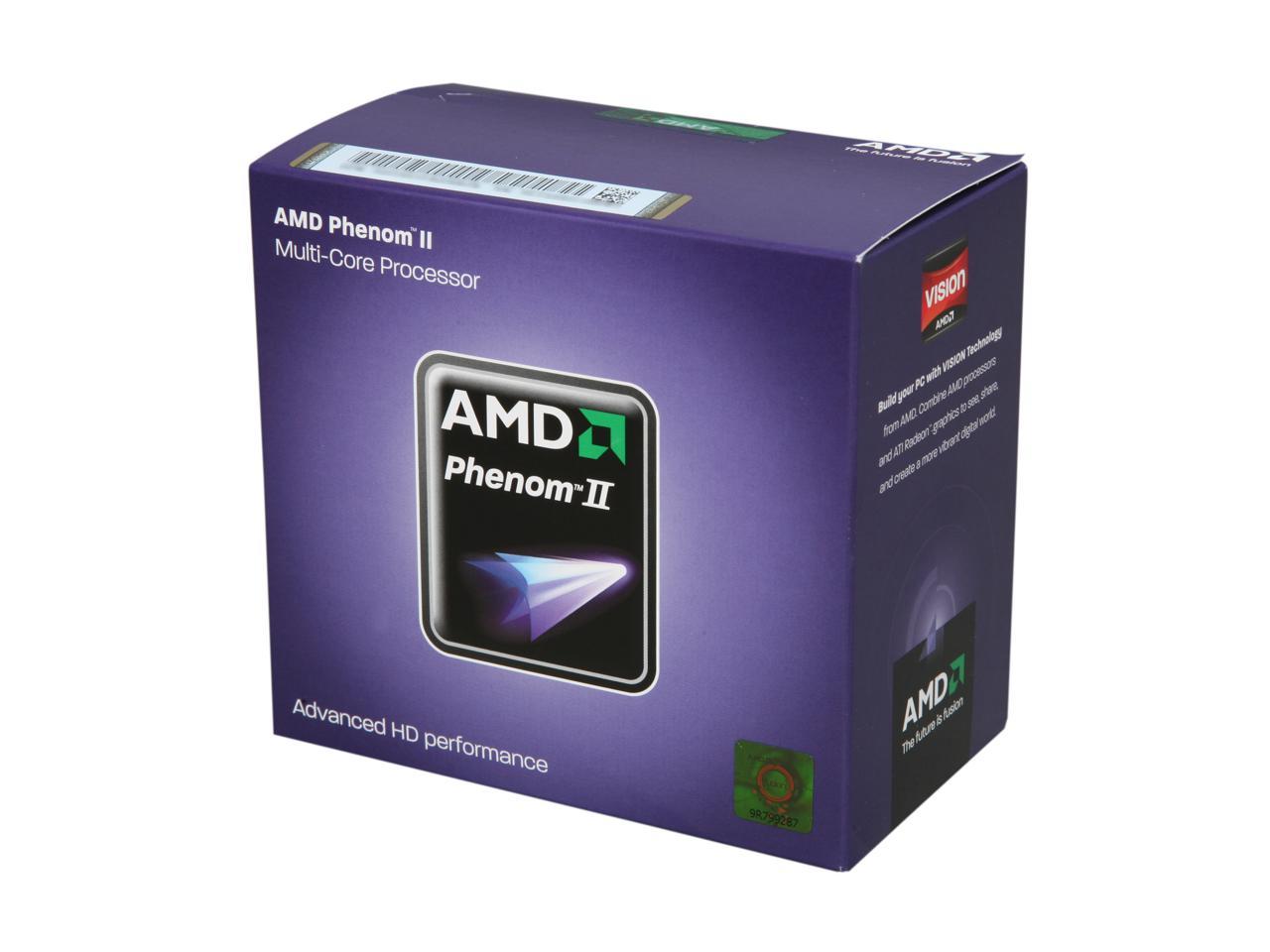 (754) Write a Review
See more "amd phenom ii x6"
OUT OF STOCK.
LOADING...
Overview
Specs
Reviews
Experience a new world of six-core computing with the affordable AMD Phenom II X6 1055T. Every aspect of this processor was designed with speed and energy efficiency in mind. Equipped with AMD's innovative Turbo CORE technology, the Phenom II X6 1055T adjusts to the dynamic needs of performance users. AMD64 with Direct Connect Architecture and 45nm technology has created a tuned processing pipeline that helps keep your system performing at the highest levels. HyperTransport technology provides up to 16.0GB/s bandwidth to reduce system bottlenecks and AMD Balanced Smart Cache ensures quick access times to highly used data.
Energy efficiency is important to AMD, allowing you to enjoy a cool, quiet PC while saving energy and reducing heat, noise and the effect of your computer on the environment. Energy efficiency innovations include Cool’n’Quiet and AMD CoolCore. These technologies reduce power consumption by balancing the processor activity.
AMD Phenom II processors also offer support for Virtualization Technology. You can run virtual environments on one system with ease, allowing you to use legacy programs on a separate operating system. Add the convenience and power of multi-core processing and enjoy the benefits of energy efficiency with an AMD Phenom II X6 1055T today!

Pros: It's a six core 64-bit CPU for less than $170. How can you possibly go wrong? You really cant. And unlike certain competitors I could name, AMD includes a pretty decent stock fan with the processor itself - you don't really need to buy another one because this one is easy to set and doesn't break easily when you remove it. It's also my first foray into AMD territory in a long time - the last AMD processor I had was the K62. It was really easy to setup and I'm impressed with the way it's running Windows 7.

Cons: AMD motherboards are very hit or miss. It took me three tries to get one that worked correctly - the Gigabyte and MSI boards I tried failed almost immediately, and after two or three returns to Newegg, I wound up going with the Asus M4A87TD Evo and it's worked perfectly fine ever since. It's certainly not the CPU's fault - but with motherboards I've learned that you get what you pay for, and it's certainly the case going with a processor as good as the Phenom II is.

Overall Review: I wish I had bought one of these for my home system!

1 out of 1 people found this review helpful. Did you?
Greg V.
Ownership: 1 week to 1 month

Pros: This thing is incredible. Used to using a turion x2 @ 1.7ghz so coming from that to a 6 core, the performance is phenomenal. Couldn't slow it down at stock speed. Overclocked it to 3.22ghz and ran prime95 for a few hours and its stable. Temps of 30C at idle and 50C at max load. Room to overclock more, especially if an aftermarket cooler and thermal paste is used.

Overall Review: Couldn't be happier. AMD>Intel based on price alone. Intel is way too expensive. 6 cores for less then $200... come on!

1 out of 1 people found this review helpful. Did you?
Robbin N.
Ownership: 1 month to 1 year

Pros: this thing kills at video compression. My old dual core machine would compress avis to rmvbs in 1.0 x real time, this thing will do the same files in less than 0.5 real time without maxing out. I can compress video and do multifarious other tasks at the same time. Eggcellent!

Pros: Unsurpassed quality for the price. Can't beat it for the price. Works great on our science stations in our lab. Can't comment about performance in gaming since we don't play games.

Overall Review: Ok. For those who are Intel fans or for those who are not sure about this CPU, let me say a few words. I am an Intel fan and I own all Intel CPUs. Now, that being stated here comes the facts. I am a scientist and I work in a lab with 9 more people including other scientists and research assistants. We have 6 computers in the lab, all with same amount of RAM and storage: 4 computers are using Intel Core i7 960 Bloomfield. The other 2 computers are using this processor (Phenom II X6 1055T). All of us randomly work on and switch around these 6 computers during our 10 hour work day. We use all sorts of scientific software from data analysis to databases to performing complex scientific calculations. Noone notices any difference in performance. Noone says "yes, I was on the AMD computer and it took a bit longer to finish." Noone says "It's taking a while because I am on the AMD." If there is a difference in performance, it is so small that it is not noticeable in these tasks.

Pros: General - It has done very well for stock performance. Haven't really found a reason to overclock it. Of course, I didn't really have a reason to upgrade from a quad core either. - Excellent cost - The stock fan does great for standard use. Gaming - TF2: after adjusting some things, I can hit 350 fps average. L4D2 pretty much goes the same way. - Crysis: 80 Fps is pretty good. - Metro 2033: People were right about this game being graphically demanding. CPU usage only hit about 15% though. The lowest I got was about 30 fps. This is probably has more to do with my card though.

Cons: Something witty that explains why I don't have a con.

Overall Review: Mobo: GIGABYTE GA-880GMA-UD2H AM3 Card: SAPPHIRE HD ATI Radeon 5750 Ram: 8 Gigs Money Spent on current rig: $800 I haven't used amd until now and I don't really care about the amd-intel rivalry thing either. I feel the i7 series and the phenom II are well ahead of themselves. The gulftown series too. You're definitely not going to see a difference in performance of these chips. This applies especially to heavy gamers like myself. The only thing I guess that made the hit or miss was the price.

Pros: Its more processor than I actually need, but since this build is suppose to last at least 4 years I'll take it. It's cool. I don't recall it going above 30deg C at idle. All out hamster-wheel spinning will get it up to maybe 68deg C.

Cons: No fireworks when I put it in. (That's what she said. Zing!)

Overall Review: I'm very impressed with this little chip. I was torn between this and the 1090T BE for the unlocked multi. I'm glad I saved $100 as I'm getting the same OC results as a lot of 1090T people are getting. I have this paired with MSI's 790FX-GD70 board with the 1A BIOS.