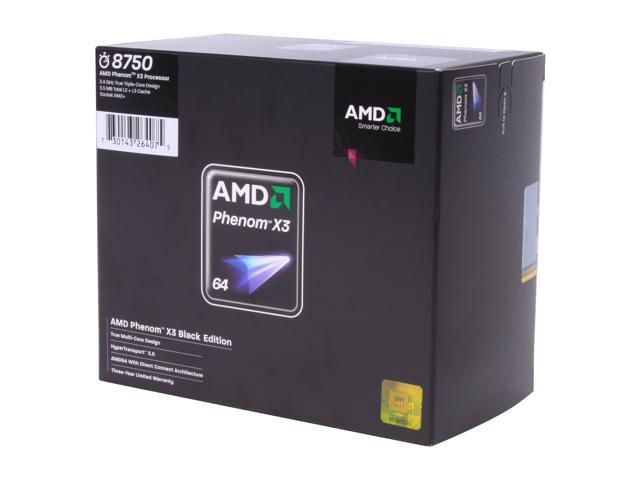 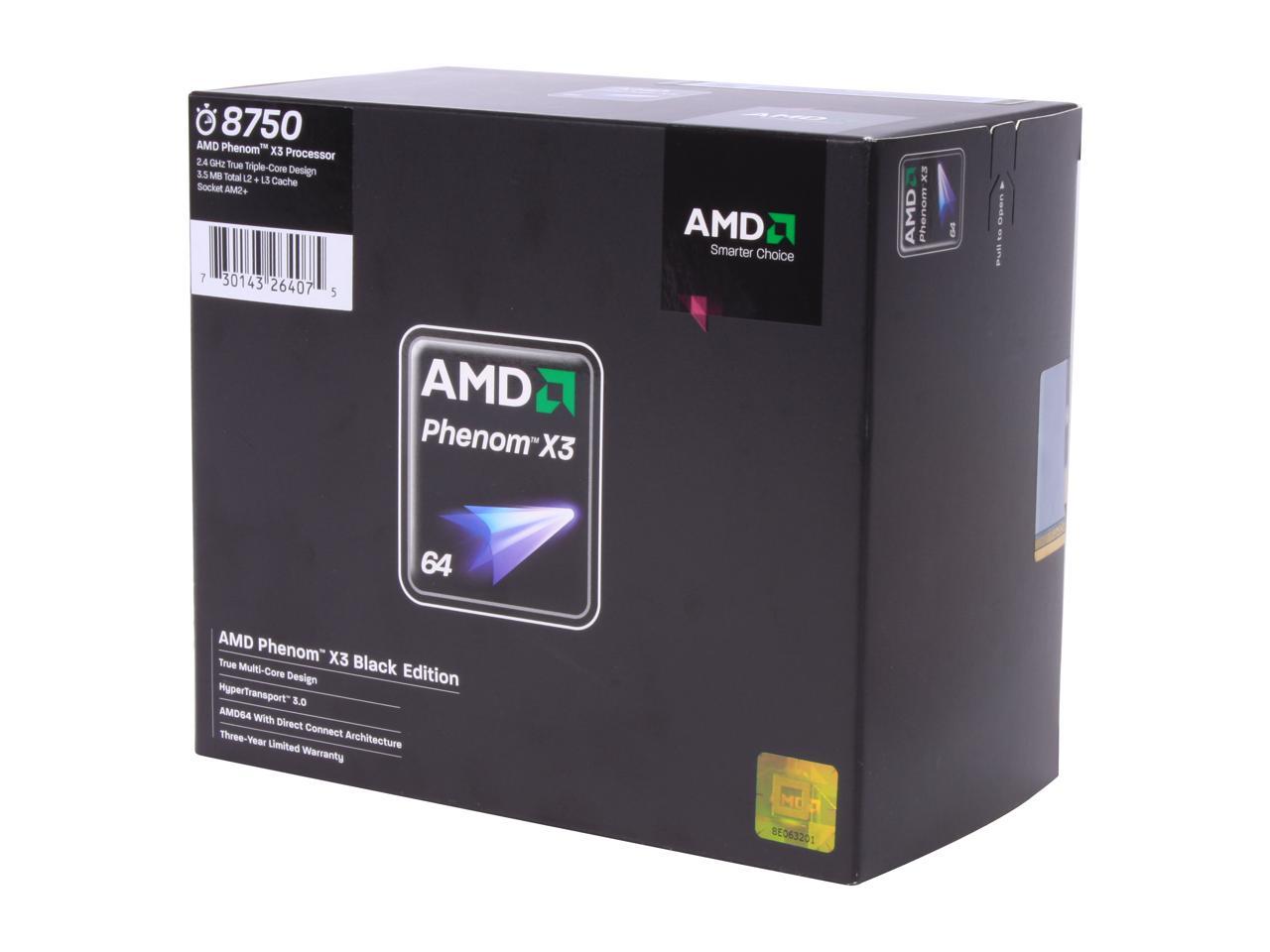 (123) Write a Review
OUT OF STOCK.
Overview
Specs
Reviews
Like the superheroes of old, the AMD Phenom streaks out of the night to lay waste to your enemies. The 8750 has 3 cores that run at 2.4GHz. The tri-core Phenom processor has 128KB L1 and 512KB L2 caches for each core and a total of 2MB L3 cache to buffer really heavy data flows.
Memory transfers get faster than ever. HyperTransport Generation 3.0 mode allows up to 16.0GB/s of bandwidth. Add that to the 17.1GB/s from the integrated memory controller for an amazing 33.1GB/s of memory bandwidth. This unprecedented bandwidth is needed to feed the data hungry AMD64 with Direct Connect Architecture cores.
You'd think that all of this power could get too hot to handle. Think again. AMD's Cool'n'Quiet 2.0 technology works with CoolCore Technology to minimize heat while keeping power and efficiency up. Now the cores can shut down unused parts of the processor when not in use. This saves power and helps to reduce the amount of heat generated. This function is built in so there's no need for drivers or BIOS updates.

Pros: Three cores seems to be a great compromise between two and four. There does seem to be an advantage over two, and I am not sure anyone uses four to much benefit. I OC'd it to 2.8 just using the multiplier and it runs very cool and stable (idles at 32C and after three or so hours at 100% on all cores it gets up to about 45C and seems to level off. All that on the stock cooler on a GIGABYTE GA-MA790GP-DS4H. Scores better than my E6850 which is still considerably more expensive.

Overall Review: I did get it over 2.8ghz, but it actually lost some performance on benchmarks. Probably need so more power at that point and I try not to mess with voltage. People complain about the stock cooler but do you ever really get a good one with the processor. The cooler is plenty for those that don't plan on a lot of tweeking.

Pros: Triple Cripple: Extremetech.com had a complementary review where a triple core at 2.3GHz surprisingly topped an E8400 at 3.0GHz in games. This Black Edition overclocks to 3.1GHz at 1.38V and good air cooling, giving you similar percent-overclocking potential to the afore-mentioned E8400. Phenom architecture actually does more calculations per core clock cycle than Athlon (I didn't know this before, though it's still behind Core2 on a per-core basis). Still, Vista Experience gives this proc at 3.1GHz a 5.9 rating. My E8500 at 3.8GHz nets a 5.8. Not exactly the end-all-be-all benchmark, but still a pretty good result for a $120 chip with an unlocked multiplier versus a $160-$180 chip. Does in fact feel superior to the E8500 at 3.8GHz in the games I care about, and this could have easily held me over until AMD's AM3 chips release.

Cons: Tripple cripple moniker seems unsexy at first. AMD finally has 45nm out, I purchased a 940BE and am already starting to miss this thing. Full potential of this chip may require a BIOS update, even for AM2+ boards. On my ASUS M3N32-MVP WIFI board, the cores wouldn't exceed 73% processor utilization on Unreal 3, and the game would flinch now and then running my 4870X2 with 4xAA/8xAF, max settings and Vsync. Since flashing to newer BIOS, it'll break over 80% utilization, and the flinching is almost non-existant. I discovered this by accident, because I have been trying to get Crysis to run DX10 without success. Never had issues with any of my dual cores. Wondering at this point if Crytek's DX10 coding is completely incompatible with triple-core? DX9 works fine...of course you can't access max settings which this system should handle fine. >:-( Besides that, this puppy is an excellent value, giving you most of the practical advantages of quad core at a killer price.

Overall Review: I wasn't going to buy this initially. I previously ran a 6400+ at 3.45GHz, and really I was just fine with it. But the novelty of owning a triple-core tugged at me, and I had resolved not to buy quad core until AMD released 45nm. Then I saw the Extremetech.com review. And then this Black Edition released. Well, I happen to also own an E8500 setup running at 3.8GHz, and while I don't waste much time benchmarking, this 8750BE running at 3.1GHz does in fact feel equivalent if not better than the Core2 at 3.8GHz. It depends on how the game is coded of course. Anything by Unreal is better on the 8750 due to better multi-core utilization. Crysis OTOH is mostly single-threaded, at least in DX-9 (watch the Core activity in task manager while running the game if you don't believe me), giving Intel as big an advantage as possible. Runs best on Intel indeed... Games coded for dual cores are generally a wash, since graphics drivers work multicore all the time.

Overall Review: I installed this as a replacement for a x2 5600 that was running a little warmer than I was happy with in a system that must be rock solid. It resides under a Zalman 9500 cooler. The 8750 was immediately stepped up to a x14 to essentially perform like the 5600 with an extra core. The motherboard is a Gigabyte GA-M750SLI-DS4. Ran SiSandra tests for about two weeks with no hiccups and temps idling at 30 and almost always staying under 40 under stress. Hit 44 once for a fleeting moment. It may well run at a faster multiplier, but I have no need to try in this system. This CPU is a very worthy option to anyone building a new system or upgrading an old one and not needing a x4. I was skeptical, but stress, stability and performance testing made me a convert.

Cons: None really. I was surprised to discover that this includes a HSF, although it`s the plain all-alluminum version. Just about anyone buying this CPU will likely get a better cooler anyway, and in fact it really needs a better one.

Overall Review: I don`t have any OC info to offer, but will say that at stock speeds this processor is noticeably faster than a 9550 Agena quad I once owned. The same is true for the non-BE 8650 X3; I bought one of those the day they first showed up on `egg. I love the tri-core AMDs. They are very unique, faster than you might expect, and multitask like freaks. This CPU on a Gigabyte 790GX board with 4GB of PC2 8500 G. Skill RAM, all inside an Antec 900 makes for a beautiful & hella fast PC. Something to consider: It`s been my experience that a 64 bit OS (Vista especially) brings out the best in AMD`s quads and triple core CPU`s. Just a thought.

Pros: I use to be the owner of a 9600 Black Ed but sold it because it wouldn't budge when it came to overclocking. I replaced it with this 8750 and this is what I'm use to; 3.0Ghz on air !! And like the other guys have stated, it is "scary fast".

Cons: It could be a little bit cheaper. :\

Overall Review: My motherboard bios didn't allow for the usage of the unlocked multiplier because it's still in the works. So make sure your motherboard bios allows for unlock multiplier use for the Black Ed. or else you'd have to do it the old fashion way; raise up the frequency.

Cons: Shipping took a little longer then what was advertised on Newegg.....I still love the Egg for providing free shipping eventhough the economy is in shambles.

Overall Review: Was running a phenom 9600 and the best overclock I could get out of it was from 2.3 Ghz to 2.5 Ghz, and that wasn't very stable to say the least. I was going to purchase the quad 9950 BE so that I could get a decent overlock; however, after some research, I found out that people were overclocking this triple core to 3Ghz and beyond with nothing more then a multi and voltage change. After recieivng this CPU, I threw it in my motherboard and changed the multi to 15x and adjusted the voltage to a modest 1.3v and it runs great on a cheap MSI 790x v1 motherboard. For some reason, I did not have the option to change my cpu voltages in the bios (go figure), so I was able to adjust it in AOD. I was able to change the multi to 16x and running at 3.2Ghz and able to boot into windows; however, no luck on running AOD stability test or on prime95. I play MMOs (Warhammer-AOR) and my frames per sec jumped from 25-35 to 50-70s on highest settings, running at 3 Ghz. Saved $50 not getting the X4 9950.