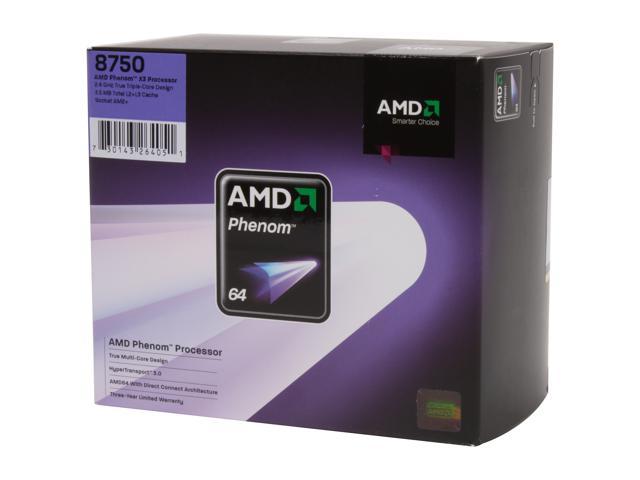 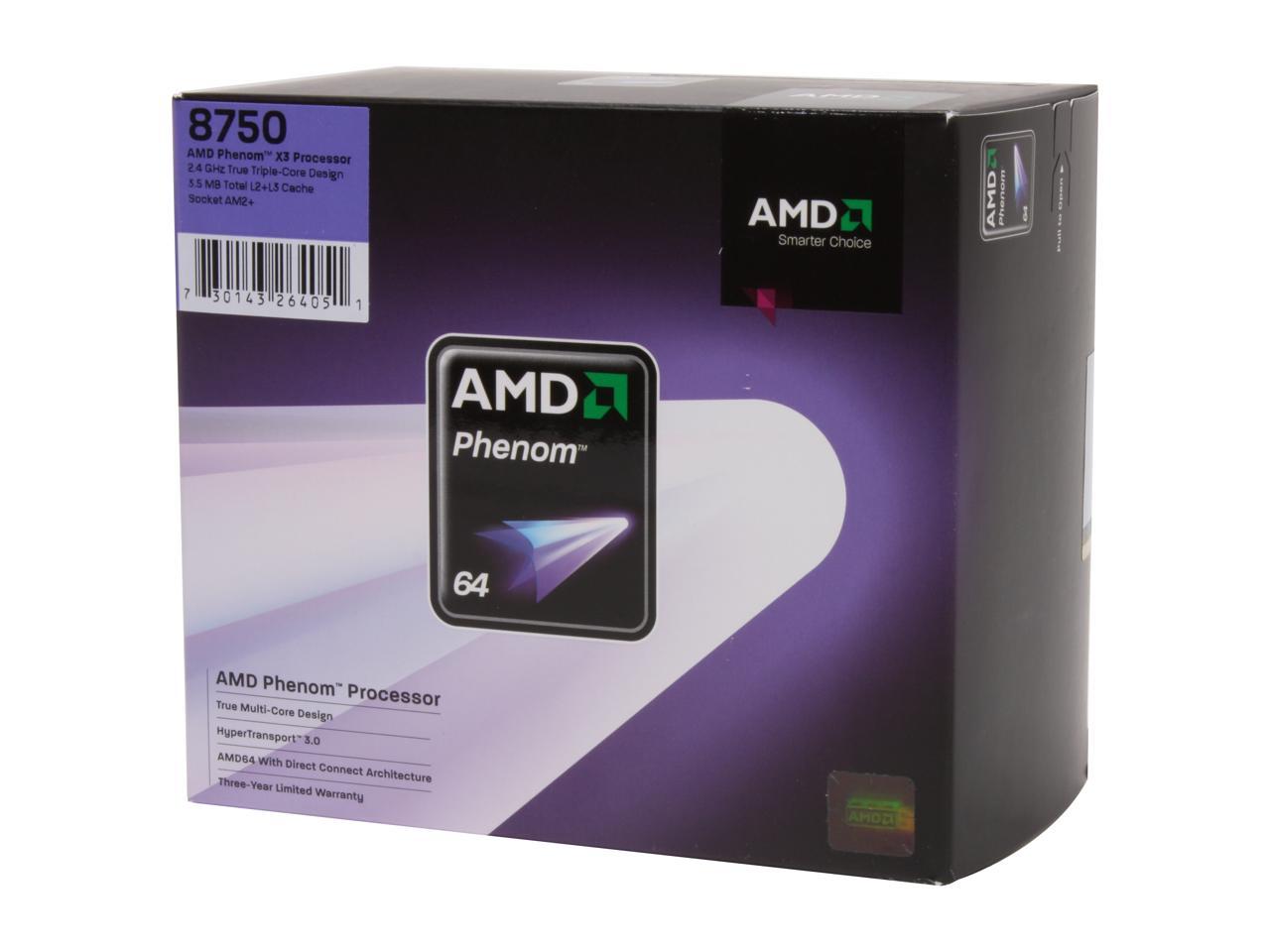 (46) Write a Review
See more "amd phenom"
OUT OF STOCK.
Overview
Specs
Reviews
Like the superheroes of old, the AMD Phenom streaks out of the night to lay waste to your enemies with three 2.4GHz cores. The triple-core Phenom processor has L1 and L2 caches for each core and 2MB of L3 cache is available to handle really heavy loads or large data sets.
Memory transfers get faster than ever. HyperTransport Generation 3.0 mode allows up to 16.0GB/s of bandwidth. Add that to the 17.1GB/s from the integrated memory controller for an amazing 33.1GB/s of memory bandwidth. This unprecedented bandwidth is needed to feed the data hungry AMD64 with Direct Connect Architecture cores.
You'd think that all of this power would be too hot to handle. Think again. AMD's Cool'n'Quiet 2.0 technology works with CoolCore Technology to minimize heat while keeping power and efficiency up. Now the cores can shut down unused parts of the processor when not in use. This saves power and helps to reduce the amount of heat generated. This function is built in so there's no need for drivers or BIOS updates.

Pros: Used this processor in my first build, which was replacing a seven year old Dell with a 2ghz Pentium 4 (Northwood). Paired this with a Gigabyte GA-MA78GM-S2H motherboard and I am extremely happy with my new machine. I am pleased with the performance I get with this processor: it is great to be able to enable active scanning for viruses or adware and not see a massive performance hit, I also don't notice when the scheduled AVG scan starts, something which would bring my old machine to its knees. Highly recommended.

Overall Review: First ever AMD based machine that I have owned and I really like it. I am using this processor in my critical "get work done" general use machine -- web, writing, photos, e-mail, casual games, skype. Fantastic!

Pros: It's a decent replacement for my older dual core.

Cons: It's a little hotter and the new heatsink fan runs more loudly.

Overall Review: I tried to find the quad core version that was compatible with my Asus M2N mb, but I think they're been out of production for too long.

Pros: Very good CPU for the Price. Dont be stupid and buy a very expensive CPU like a Corei7 When a HD movie or Videogame is played on a computer, the GPU handles the majority of the work, not the CPU. all that is needed in order for the game or movie to run smoothly is a good GPU and an above average CPU This CPU really did make a difference in lag times on crysis and Napoleon Total War, and was a great upgrade from my dual core. Havent tried over clocking it yet because i see no need too. i can run Crysis on ultra with this and a GTX Ultra 260 just fine, so there is no need to. All in all this is a very good CPU. someday soon however, GPU will become so powerful that a massive CPU like the icore 7 will not be needed, and a good CPU like this will be able to run everything perfectly( which it already does).

Cons: Hard to unlock the 4th core, but i was able to do so after some hard work.

Pros: Very good Budget Gaming CPU in my opinion, i stepped up from an x2 5000+ and there is certainly a difference here. I can multi task very easily play a game (Dragon Age Origins) in witch is a game that benefits with multi core, watch a movie, browse the internet, listen to music all at once, it takes it all in very easily like it's nothing. I was surprised I could play such a game that is so heavy on the CPU and do all these other task at the same time. It also has some nice L3 cache compared to my old CPU in witch it did not have. If you can catch it in a good combo deal then go for it! Other wise just get the Black Edition it's cheaper than this one now. I'm not really a total freak when it comes to alway's wanting to upgrade when really it's unnecessary to for my needs. I think it should hold off for the next couple years or so and then I'll do another upgrade to a nice Quad or something depending on what's out at the time if needed. Oh know!!! Running out of room here...see cons

Cons: Really nothing is a con with this CPU except it's not the Black Edition with an unlocked multiplier. You can still over clock it from the Bios. The price has gone up for it to $87.00 where as the BE is only $73.00 at the time of this review. If your like me and on a tight budget then it's a good route to go for a Triple core over Dual, yeah they may be faster in speed sometimes but there are more and more games on there way... Hungry for more cores. Dual core is fading out don't be a fool just at least future proof yourself with a nice AMD X3 it doesn't matter Phenom or Phenom II they're around the same price as a Dual core! If your lucky enough you may be able to unlock the fourth core on some of these chips and get a nice Quad :p

Overall Review: AMD = More bang for buck, good performance :) Intel = Overpriced!!! You know what I mean MF's... yes they may have a little better performance sometimes but also realize you will pay $$$ for it too. I got this in a combo deal with an ASUS M4A785-M Motherboard for $126.00 at the time of purchase and the board is normally $80.00 so the CPU ended up being under 60 bones! Not bad for a triple core :) I haven't messed with it much when it comes to over clocking it but I have managed to get it up to 2.7, 2.8 GHz stable from the Bios. I did get it to 2.9 but it started blue screening on me but that's understandable since the ram I have isn't really that great. It still can be over clocked higher 3.0 GHz and a little above that, just do some research on Google and you will see. FEARMeekMeek out!

Overall Review: Installed on a AM2+ that had a 5600 brisbane. Gave up some clock speed but the extra core made up the difference and then some!! Ordered on a Monday and was waiting for me on Tuesday...TX Newegg for another smooth transaction !!

Pros: I used this processer in my first ground up build and I am impressed!! Everything went smoothly and The triple core works flawlessly. Even without being overclocked this processor barely gets over 30% duty cycle. Great buy for the money and even comes with fan and heatsink (which must be used to keep the 3 year warranty valid) Voted for newegg product best buy.

Pros: - easy to install - accompanying fan and heatsink seem fine to me (and you have to use them with this processor in order for the 3-year warranty to remain valid)... the heatsink comes with a pre-applied thermal insulation substance (and it's as big as any I've seen before)... can install this thing in about a minute (with little to no experience)... - seems fast enough, though I haven't tried to overclock it etc, as I don't really have to... temp stays well below 50 degrees C... - works perfectly with my new ASUS M4A785-M 785G Mobo, and I expect them to keep trucking for years

Overall Review: - the fan has a 4-pin connector (fyi) - it says this is a "true triple-core" processor, whatever that means... I was unsure about the odd number of cores, but it seems to work great... with only 2GB of 667 MHz RAM, it seems I can run a multitude of programs simultaneously, smoothly and quickly (I'm not a gamer though)... - I bought it and my mobo as a combo (for about $150), along with other components, all of which work well... This was my first Newegg experience, and they've got themselves a loyal customer for life. - I live in Canada (and it's winter), and was worried that a long, cold day in the back of a UPS truck might wreak a bit of havoc on my processor and mobo (though this concern was totally uninformed/uncredible, it was just a vague, minor worry)... The component boxes were very cold when delivered, but everything works perfectly.

Pros: I installed this in my HTPC build, using the windows xp OS, and it runs circles around my quad core 2.2 Ghz AM2+ 9600 processor. I am very pleased with this processor for it's speed and durability.

Cons: Runs incredibly hot. Make sure that that you have circulation and that you have more than just the stock processor fan cooling down the processor.