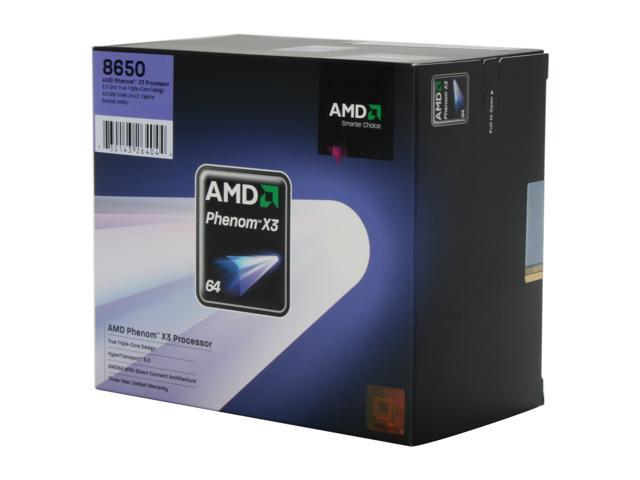 (115) Write a Review
OUT OF STOCK.
Overview
Specs
Reviews
Like the superheroes of old, the AMD Phenom streaks out of the night to lay waste to your enemies with 3 2.3GHz cores. The triple-core Phenom processor has L1 and L2 caches for each core and 2MB of L3 cache is available to handle really heavy loads or large data sets.
Memory transfers get faster than ever. HyperTransport Generation 3.0 mode allows up to 16.0GB/s of bandwidth. Add that to the 17.1GB/s from the integrated memory controller for an amazing 33.1GB/s of memory bandwidth. This unprecedented bandwidth is needed to feed the data hungry AMD64 with Direct Connect Architecture cores.
You'd think that all of this power would be too hot to handle. Think again. AMD's Cool'n'Quiet 2.0 technology works with CoolCore Technology to minimize heat while keeping power and efficiency up. Now the cores can shut down unused parts of the processor when not in use. This saves power and helps to reduce the amount of heat generated. This function is built in so there's no need for drivers or BIOS updates.

Learn more about the Phenom 8650

Pros: Actually runs very well, I can`t tell a difference between this and my 9550 quad. Vista x64 gives this a 5.4 rating, as opposed to a 5.8 for the 9550. The AM2 Brisbane I once had installed in my system got a 5.0. It turns out that the BSOD`s I had been getting WERE NOT related to the CPU. Whether or not anyone really needs a 3-core CPU is debatable, but you can`t deny the uniqueness of it. I had looked forward to buying one these when they were first announced, I now have one, and I LOVE IT.

Cons: Knowing what I know now, NONE. I wrote the "JUNK!!!" review, which has since gone up in flames...as well it should. OK, once I cooled down and collected my wits, I found out that the BSOD`s and error codes were different from the ones I got with that 9500 I owned; it was the "IRQ not less or equal" code, which is far different than the infamous "Clock interrupt" code which plagues many (including the one I had) B2-stepped Phenoms. What a relief! The IRQ errors are quite fixable. I simply did a repair install, installed all updates & SP1, and the machine ran for more than 8 hours straight with NO PROBLEMS WHATSOEVER last night. I`ve run the box about two hours so far today, and it`s run flawlessly.

Overall Review: Yes, I ripped AMD in my last review, but it`s like arguing with your mom...you may say things you regret, but once it`s all said & done, you still love her, right? Same deal here. I know I should`ve waited before writing the other review, but I was livid and not thinking straight. The bad experience I had with that @#$%^&* 9500 still has me on edge. As I said in the title, I was wrong about this CPU, it`s great. In this case I`m GLAD I was wrong. Oh, and thank you to the one dude who voted "helpful" in my other review. =} One last thing: As always, the N-tel sheep are out in full force around the web on this CPU...they`re spreading FUD about the "faulty" disabled fourth core. I strongly urge you to do research on this, it doesn`t mean jack . Personally, I`ve never cared WHAT`S under the heatspreader...1 or 100 disabled cores, a bag of chips, Jimmy Hoffa, or whatever. Do the research and discern for yourself.

Pros: Perfect funtion out of box, realistic price, excellent performance. Power, beyond need for 90% of us. Strapped to a t-Power n750 with 8gb 800mhz ddr2 (2x a-data dual channel kit 2x2g) pushing 2xAsus EN9600gt with raid 0 swap and raid 0 application drives, this proc pushed bioshock @ 1280x1024 with all settings maxxed in game AND in nvidia control panel. I wasn't surprised until the framerates stayed +100fps with 2 people remotely playing FFVII in a win95 virtual machine, and QFG4 in a dos virtual machine. I defragmented the OS partition with all this going on and finally saw a drop in frames, but then, direct x is on the OS drive, so I'm sure we could point the finger at slowed file access causing the minor jumpiness. With 2 virtual machines and the defrag it outperformed my friends 8600gt SLI althon x2 6000 just pushing bioshock.

Overall Review: Pay attention to your PSU. on the T-Power n750, with this proccessor, I can only power 1 en9600gt and 2 of my SATAII drives. I also had to unplug a case fan or I would have minor fluxes in power. If I add the 2nd card and go sli, or put in the crom, or either/both ide drives, I usually can't even boot. 3 web calculators recommended a 550, and I've got a 650. Stepping it up to a 850 should do the trick, will know soon, thanks to newegg and ups and the IRS.

Pros: Stable, fast, efficient. Amazing for multitasking. Runs Ubuntu (Hardy) 64bit great! Compiz Fusion works seamlessly even while VMWare 6.5 loads an OS. Not even a sign of a slowdown. I get great FPS with this and my HD 3870 on any of the games I play. Oh and I have a smooth scroll Vx Revolution mouse... It's smooth man...

Cons: OEM Heat Sync is really not built to handle this processor... Well I've been using an M3A and in all honesty it could just be the board. This thing idles at 55C in the BIOS. I haven't had any trouble and the MB temp still said it was low. I'm RMAing the M3A and my GIGABYTE GA-MA78GM-S2H is on the way. Should be able to get the ram working at 1066mhz as it should be.

Overall Review: Really look into the Mobos these days. This is a VERY new processor and for you to really see its true colors you're gonna need the right board. I've heard lots of people saying the M3A makes their CPU run hot... Well the Northbridge was FREAKIN HOT!!! Hotter than the CPU. I don't doubt the board was a big part of the temperature issue. However I'm installing a Zalmann 9500 on it this time around. Another review shows how little a difference there is between this and a quad core. This thing was AFFORDABLE and let me just say it's more than just that. It PERFORMS.

Pros: Runs fast, and handles the games I throw at it well. I'm not a hardcore gamer, but it handles EQ2 and the Half-Life series like a dream.

Overall Review: I easily overclocked the cpu to 2.8ghz with no hassle. Because of other reviews I purchased a Cooler Master Hyper TX2 cpu cooler to go with it, and I have never seen it break 40c. It does what I want it to do at a price I'm a willing to pay.

Pros: Third core for almost nothing! Power consumption Heat Feature set when coupled with the new chipsets. It does come with an OEM heat sink (didn't realize this)

Cons: The MHz is a bit low per core but third core makes up for it IMO.

Overall Review: While most games only use the first two cores, you can see an actual performance gain by putting your background processes on the third core. I also like being able to put ITunes on the third core and see 0% hit in my games.

Cons: The k10 archtecture wasn't as impressive as i thought it would be, was hoping for higher clock speed.

Overall Review: the b3 stepping is very odd, f3 stepping on th 6400+ had no delay on start but did not load instantly. b3 stepping had instant load but slower start, takes a sec or two to hit full speed.

Pros: This is a upgrade from my BE 5000 and it is very noticable improvement. Easy install and my M/B read it on 1 st start up.

Cons: Wish for a BE

Cons: Not the best over-clockability

Overall Review: I purchased another one of these for a customer after bieng really impressed by the performance of this chip a month ago when I built a computer for a customer. It's extremely fast and cool with the factory cooler. Really cool, actually. I had a Q6600 hit 65+ degrees celsius with the factory intel cooler in PRIME95; the AMD tops out at 48 to 50 degrees in the same NZXT apollo case. If you're considering buying this chip, I would go with the Gigabyte GA-MA78G-DS3HP over any other board. Just my opinion. Its compatible with AM3 as well.