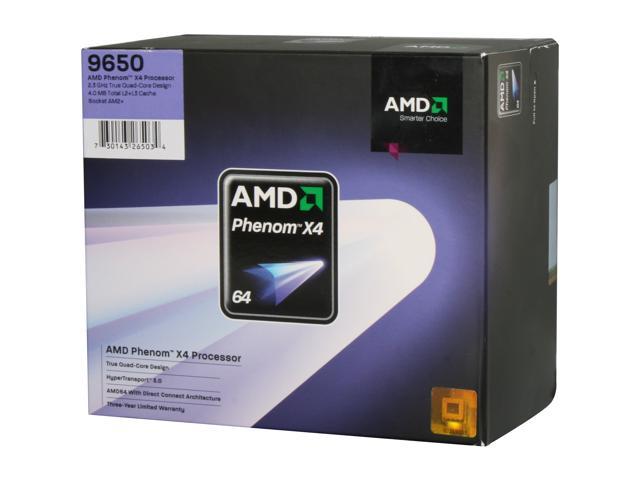 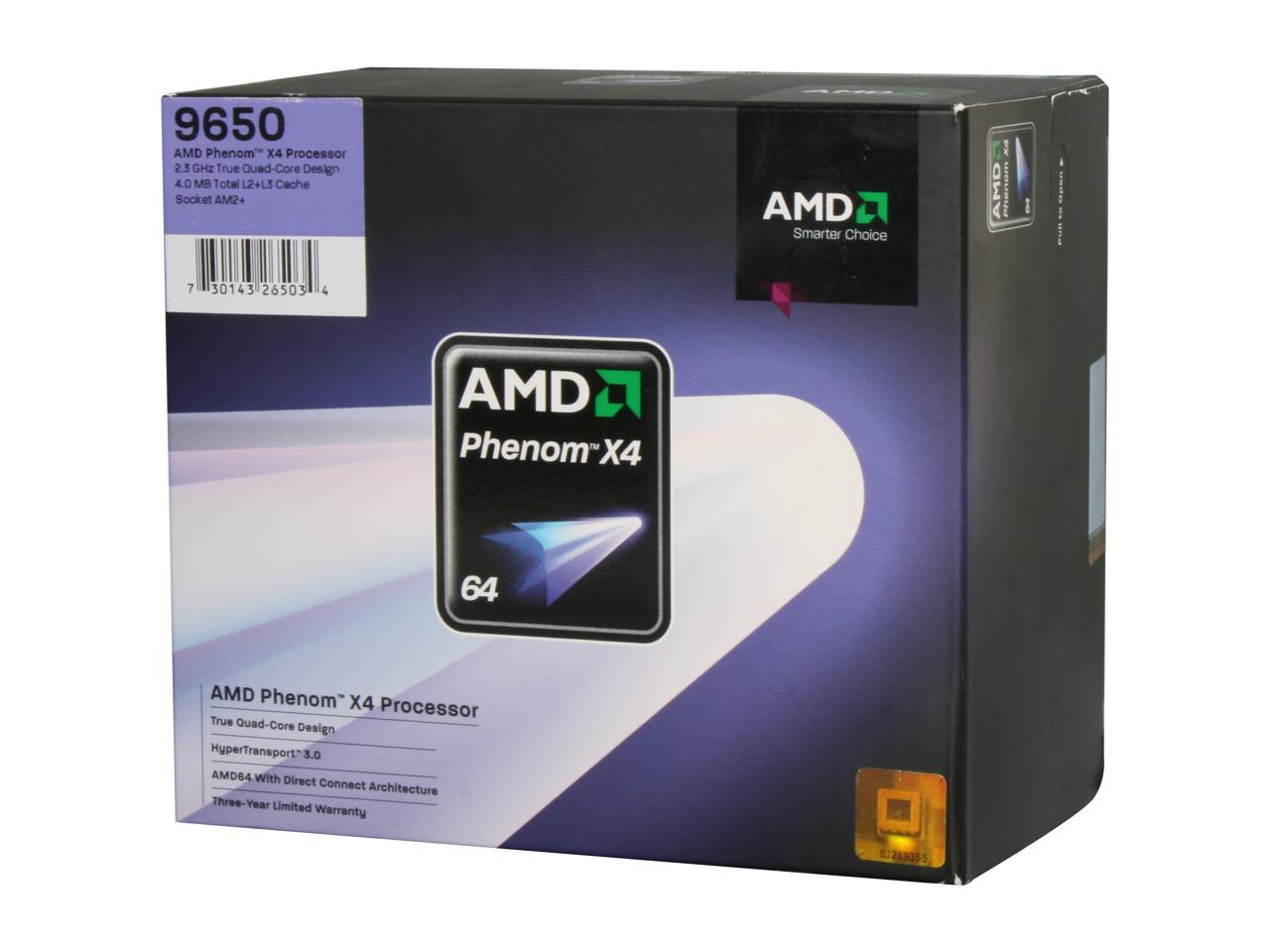 (64) Write a Review
OUT OF STOCK.
Overview
Specs
Reviews
Experience a new world of quad-core computing with the AMD Phenom 9650. Every aspect of this processor was designed with speed and energy efficiency in mind. Using the AMD64 Direct Connect Architecture, application performance is dramatically increased while reducing memory latency. The HyperTransport Technology can provide up to 16.0GB/s bandwidth to reduce system bottlenecks and the Balanced Smart Cache ensures quick access times to highly used data.
Energy efficiency is important to AMD, allowing you to enjoy a cool, quiet PC while saving energy and reducing heat, noise and the effect of your computer on the environment. Energy efficiency innovations include Cool’n’Quiet and AMD CoolCore. These technologies reduce power consumption and processor activity.
AMD Phenom processors also offer support for Virtualization Technology. You can run virtual environments on one system with ease, allowing you to use legacy programs on a separate operating system. Add the convenience and power of multi-core processing and enjoy the benefits of energy efficiency with an AMD Phenom 9650 today!

Overall Review: haven't oc'd it yet

Cons: I really wanted one of the Phenom x4 65W CPUs but they aren't stocked at NE.

Overall Review: Core 2 Quads still win out on the raw number battle, but the Phenom x4 has a bit more water under the bridge. Meaning that Linux support for the processor and surrounding chipsets is more mature, which is a key factor for those of us avoiding Vista like the plague. I'm using this one in an HTPC build and expect to run two virtual machines almost constantly, hence wanted a quad.

Pros: amazing processor for a great price. got here alot faster than i anticipated. stays fairly cool. the stock cpu cooler is small but very effective.

Overall Review: gotta remember that the thermal grease comes on the heatsink *wipes off fingers*

Pros: Easy install, posted 1st boot....I did look up the bios upgrade and pre installed it. Runs at 92.3 F with my cooler running in silent mode (ZALMAN 9500A with Arctic Silver 5) giving me a windows vista performance score of 5.9. This replaced a dual core 5200+... boot times are faster and programs pop right up

Overall Review: I use Zalman coolers on my 2 video cards running sli and the cpu, I highly recomend theyre products...my system is barely audible if I turn off my ceiling fan.... when gaming and using it as a PVR to watch TV its very quiet...my old PC's sounded like vacuum cleaners running just to remain below melt down point

Cons: So far nothing here

Overall Review: For the price its a great upgrade

Overall Review: I placed my order at 4:30ish in the evening on tuesday with rush processing and UPS Next Day Air Saver. My package was in UPS hands at three hours later at 7:30, AMAZING, And was at my house at noon the following day. APRX. 20 hours total from California to KC, Missouri. I'd give six eggs if I could .+++A experience all around..THANKS NEWEGG Planning to overclock in a few months possibly I've heard this chip handles it well...

Pros: Processor runs at about 45 degrees Celsius after playing good quality games for hours with stock cooling. When playing older games(just finished Resident Evil 4) I've checked it at as low as 25 degrees Celsius! Haven't had any problems with it running anything so far.

Overall Review: System Build: -Raidmax Smilodon Case with one 120mm fan removed(touched my video card, should be able to modify it to fit) -This CPU -4GB 1066Mhz Gskill RAM -Gigabyte 1GB Radeon 4850 Graphics Card -Western Digital Caviar 500GB SATA 3.0 HD -Sigma Monster 650W Power Supply Get some skipping at times when there is a lot of objects on the screen(only seen this in Saints Row 2 on full settings and Warhammer Online in a situation with more than 40 or 50 people on screen) but I think when I upgrade to 8GB of RAM it will probably reduce this.

Pros: GOOD CPU. Easy to install (AMD 2+ Socket) Not too expensive. Increased my VISTA Score from 5.2 to 5.9 under Calculations per sec. I have run a couple of "Stress Tests." The AMD X4 handled them easily. *Discount and free shipping from New Egg.*