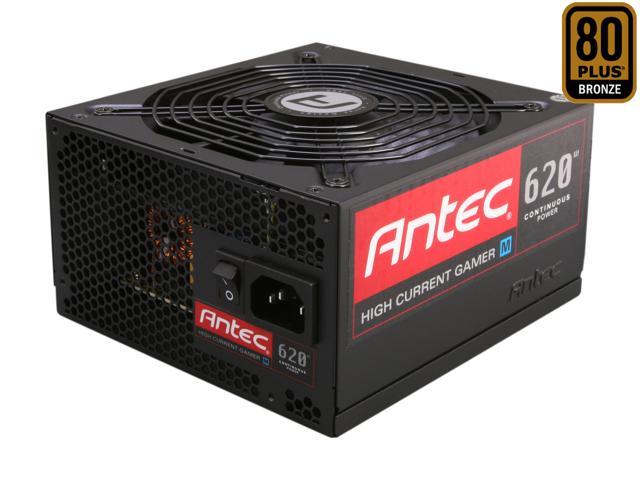 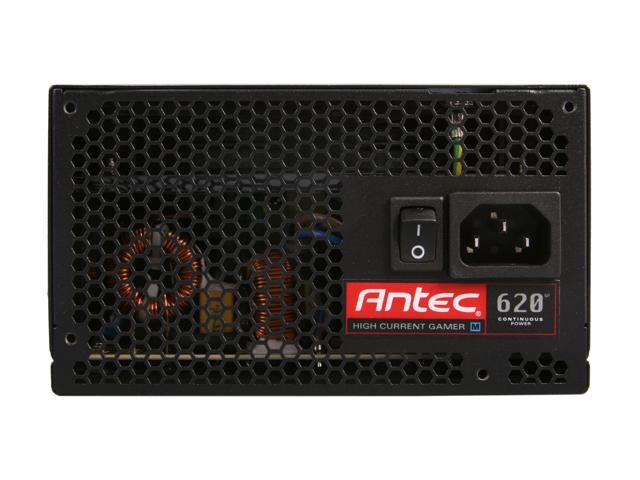 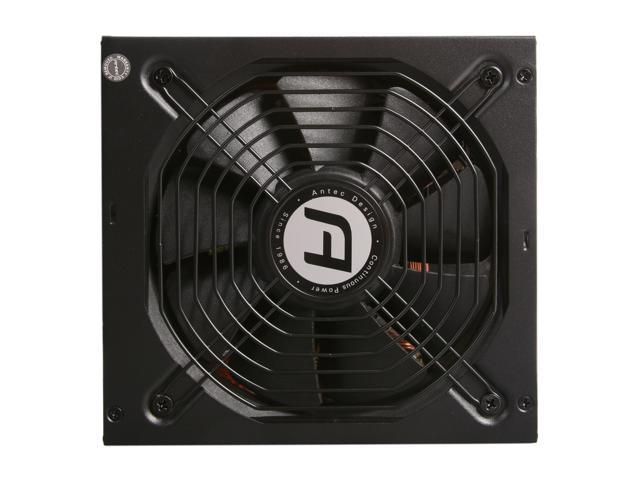 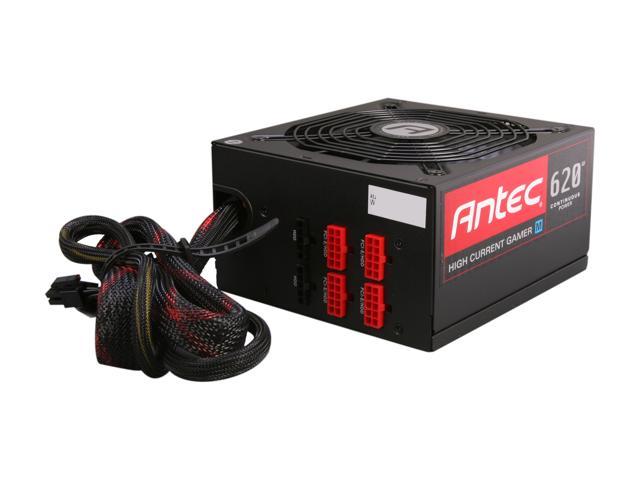 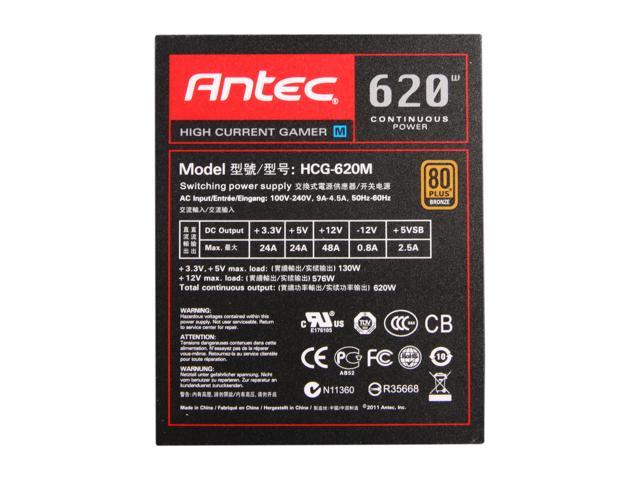 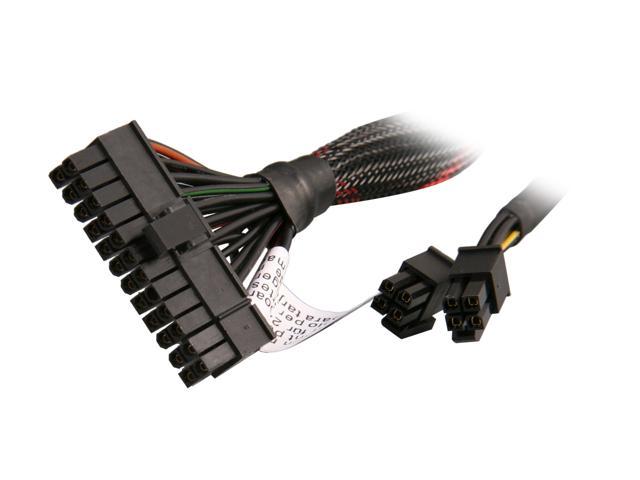 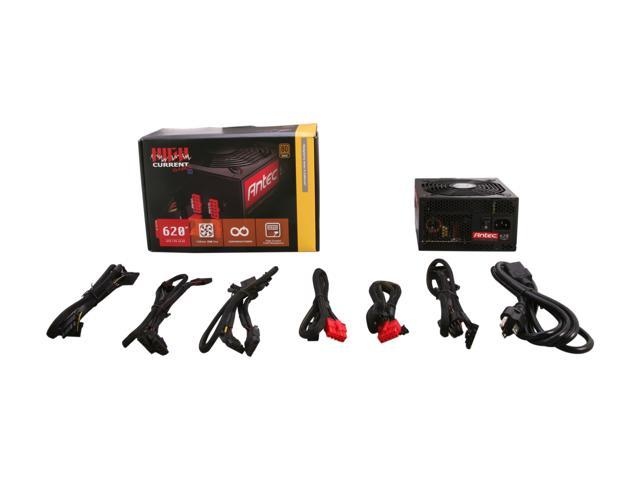 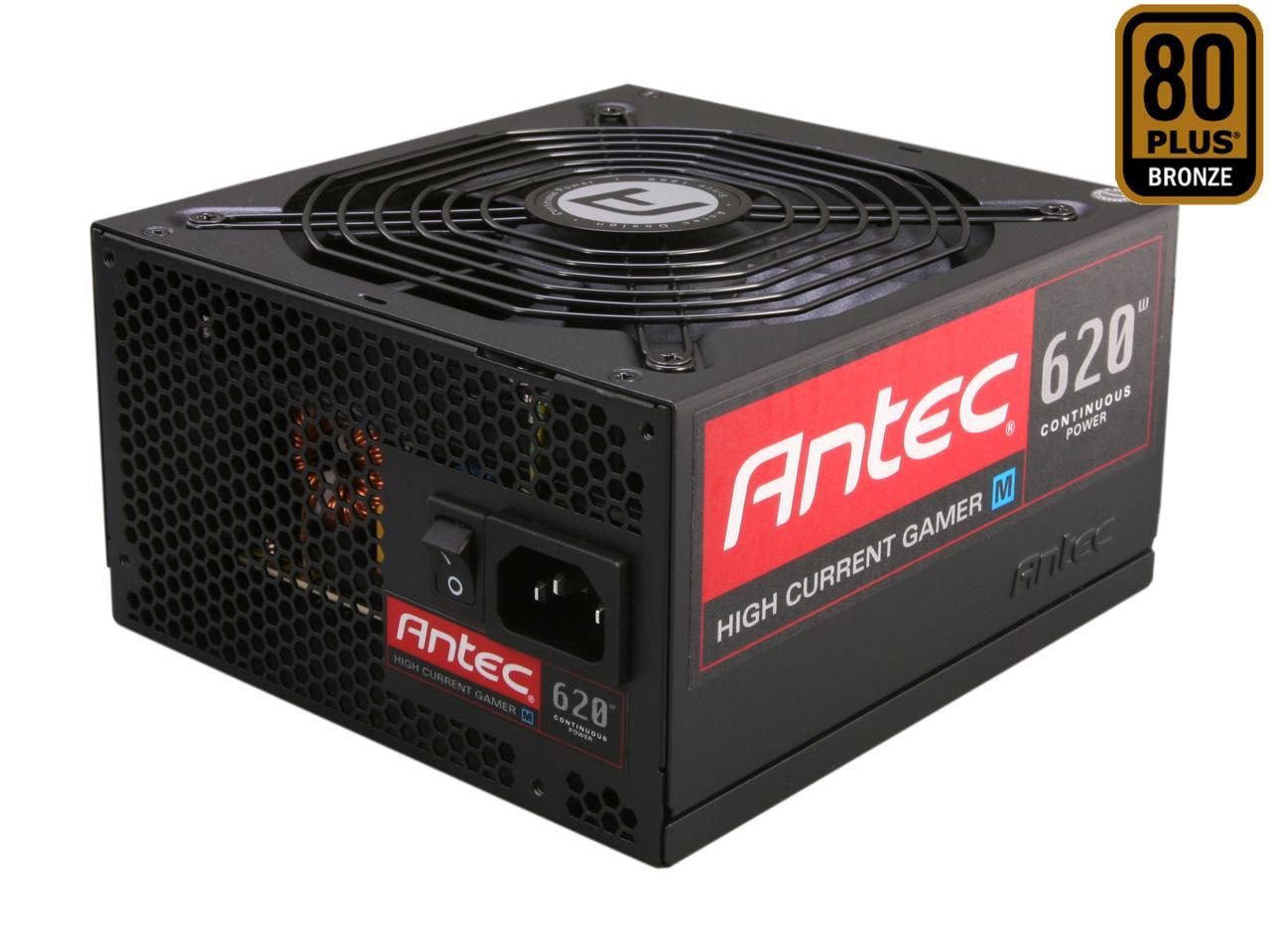 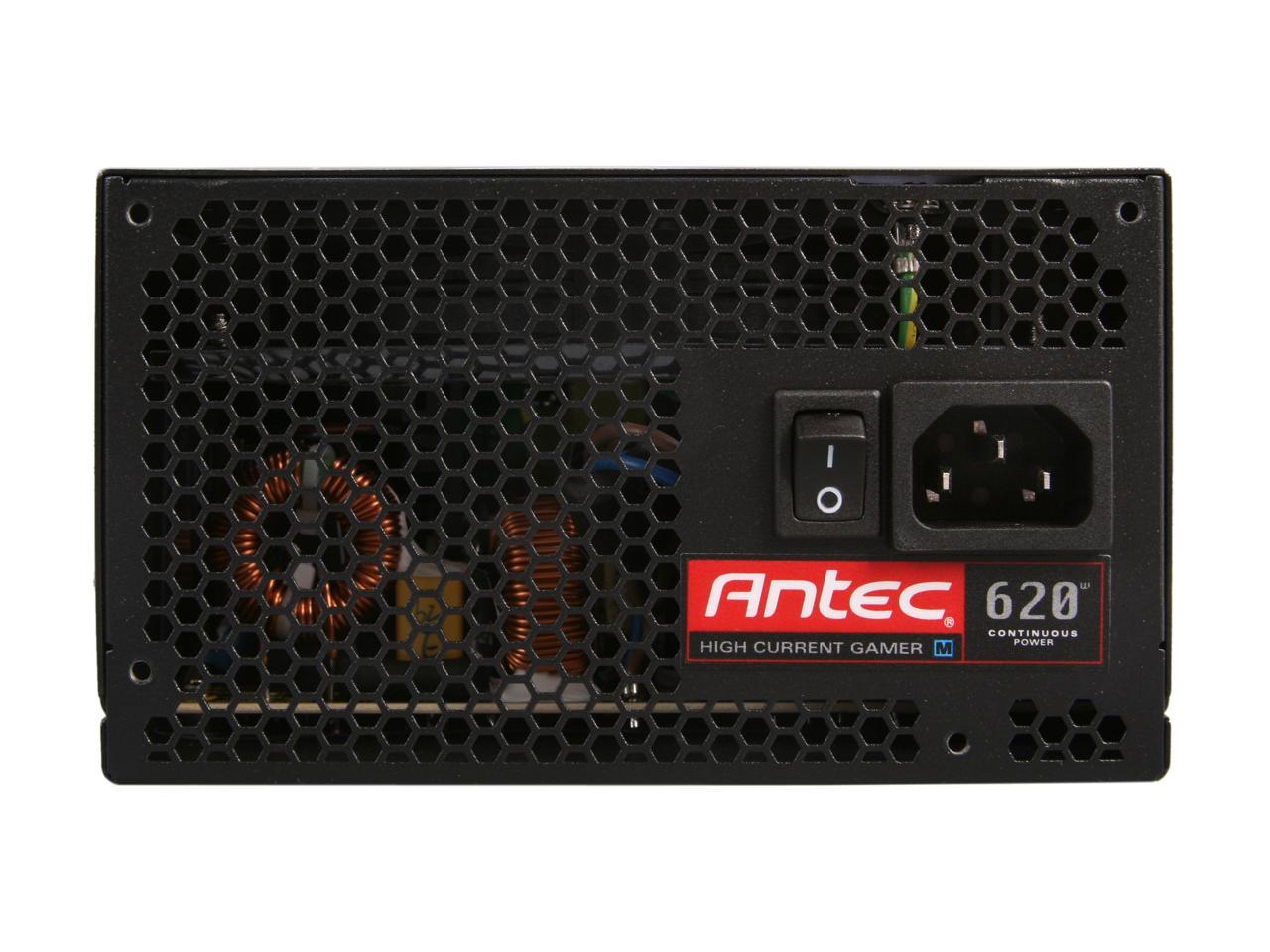 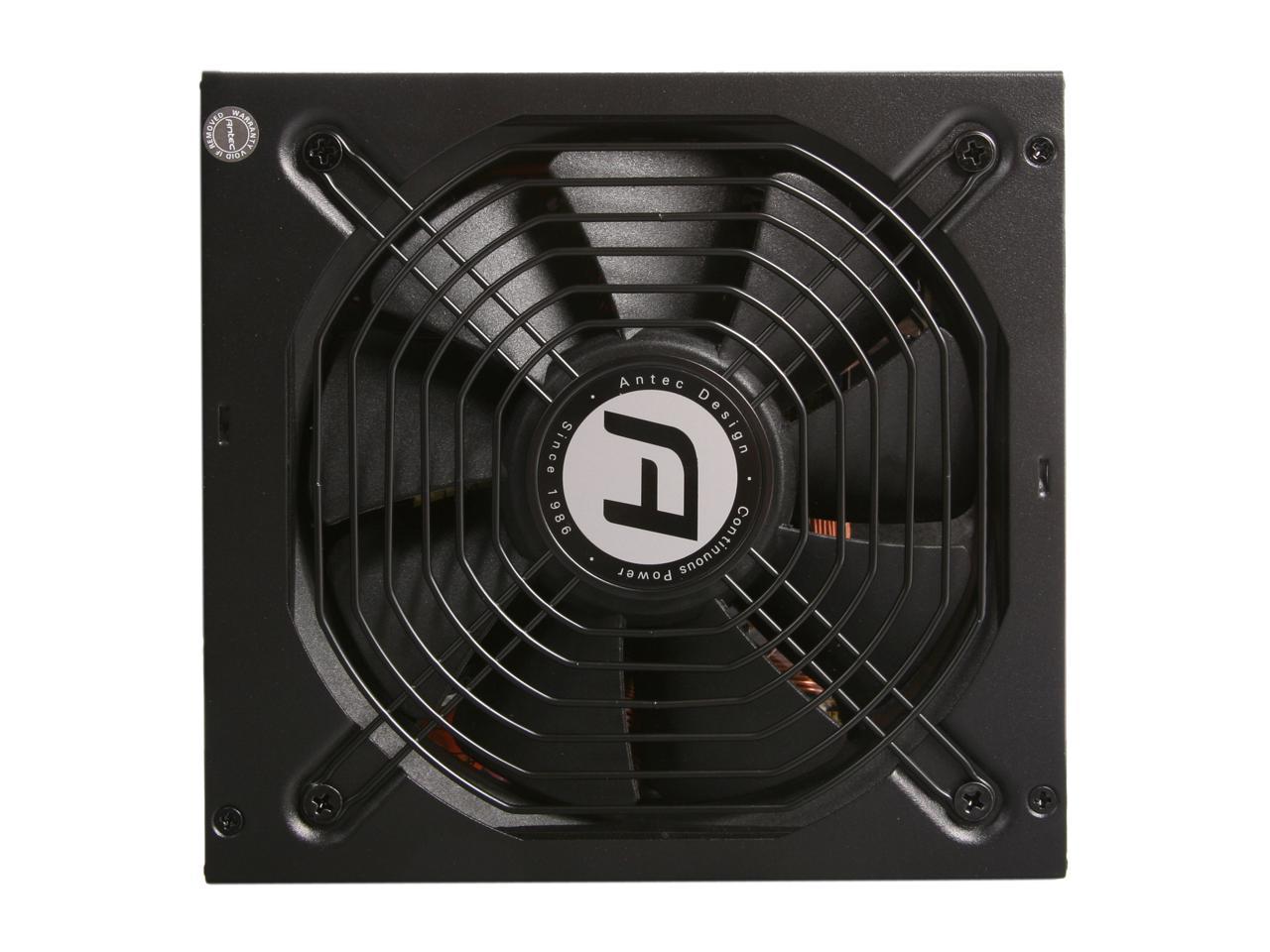 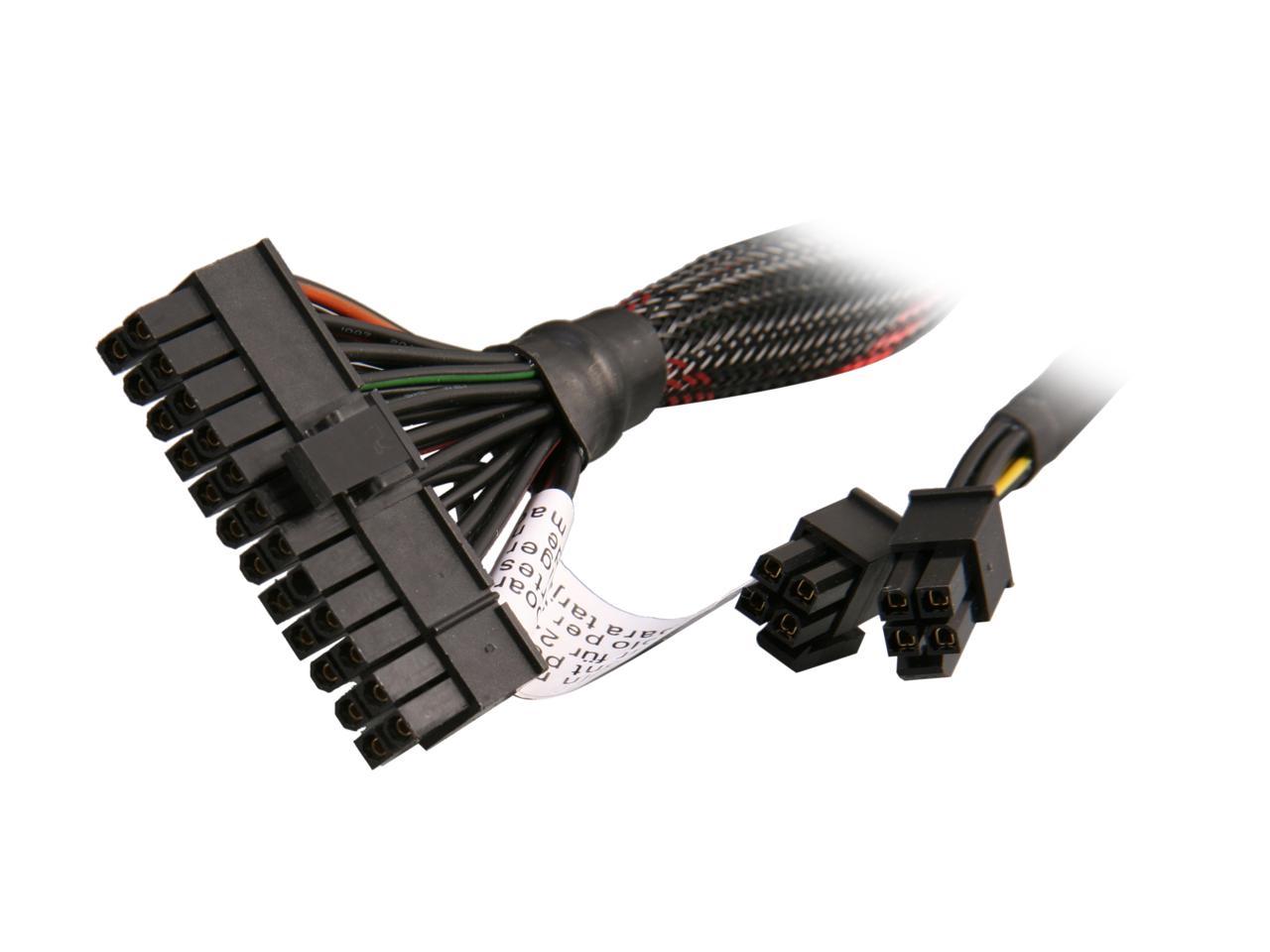 Antec's HCG M power supplies are the perfect combination of power and efficiency. The HCG M features special heavy-duty High Current connectors and cabling that supply extreme levels of power, and superb efficiency thanks to 80 PLUS® Bronze certification and Active PFC. Highest-quality connectors, Japanese-brand capacitors, and a quiet 135mm double ball bearing fan complete the package. The HCG-620M features High Current Cable Management and 10-pin modular connectors. If loads of power, High Current engineering, and extreme efficiency are what you're after, the HCG M is the PSU for you. Learn more about the Antec HCG-620M

Pros: This is a great power supply. It's Antec branded but the OEM is SeaSonic, the most respected power supply builder out there. It's nice to see a quality modular power supply in this price range. The fan is very quiet on my unit. I cannot hear it over any of the other fans in my case and none of them are loud either. Also, there are no squeals or other odd sounds when stressed. It works just as intended and does it quietly.

Cons: It only comes with two PCIe cables, even though it has the capability of plugging in four. This is a non-issue for most people, but you may want to watch for this if you have cards that require two plugs each and you want to do SLI or CrossFire. The cables are stiff. Although this is a mark of the quality of the wires and the cable sleeves, it can cause some problems because there is very little flex. For example, I was swapping out my video card and the cable supplying power to one of my hard drives was so stiff, that the plastic SATA power connector actually broke on one side as I was gently applying pressure on the cable while maneuvering parts. I had to dock an egg for this. A perfect score requires perfection. It was my fault, but I've never had this happen before. If there was more flex in the cables this would never have happened. Otherwise, this power supply is a top notch unit.

Pros: The power supply itself receives 4 stars; the one star rating is for my RMA experience with Antec, see below for details. The PSU falls just short of 80+ Silver status, and ran a Tri-Crossfire array wonderfully for almost 8 months. While it functioned, and before it fried my 3 R9-270's, I had almost no complaints about the PSU.

Cons: PSU is not the quietest, and does get loud/expells heat under load. PSU also employs more than one rail, so in heavy load applications, you have to carefully plan out what the PSU will power via which connector. My PSU died after 8 months of running a Tri-Crossfire, then died and took out my three R9-270's with it.

Overall Review: Arrived home one day to find my system shut down; it runs 24/7, so highly unusual for it to be shut off. System protected by APC SMC1500 UPS. Inspection inside the case revealed an oily substance under where the PSU had been installed, and my 3 HIS R9-270's were no longer functional when placed into a back-up rig and tested extensively. Began testing PSU, which failed to power on different bench rigs, failed multiple "paper-clip" tests, so qualified as toasted to me. Opened RMA for PSU three months ago, along with asking renumeration for the 3 destroyed GPU's. After much arguing, Antec declined request for GPU's, but accepted PSU back. Ended up getting replacements from HIS directly for GPU's; nice way to avoid any responsibility, Antec. Antec RMA department has now had my PSU in their possesion for more than a month, and have thus far ignored my repeated pleas to send a new replacement unit to me. The RMA "supervisor" I have had the misfortune of dealing with, Patrick Solamo, takes upwards of 8, 9, 10 days to respond to my communications, blaming the frequent LANFests he attends. I am now forced to obtain legal counsel in order to secure my rightful replacement for this product. I have been a faithful and frequent Antec customer since the late 1990's, but this ridiculous ordeal has lost them a customer for life, and I will go out of my way to advise my clients to avoid Antec as well. Had never had a problem with any Antec products until this PSU, and if the RMA process was in any way reasonable, I would still consider them in the future, but this experience has eliminated that possibility forever.

Cons: It might be higher gauge wiring but the cables are pretty stiff compared to my OCZ unit. Not a bib con but if you have a tight fit where your Video Card is the 6+2 connectors are hard to move and bend.

Overall Review: It Works, Replaced an OCZ Modxstream 700w that finally died after 5 years. Seems like a quality unit. ** It is recommended in a couple of review sites that you connect all video cards on the 12v1 line as the MB ATX connectors are running from 12V2

Pros: Love the Modular design with only the 24 pin and 8 pin connector leads. All the rest of the connectors are modular and sleeved in black. Runs very quiet and cool. Installed in an Antec Nine Hundred Two gaming case and the only cables you see are the SATA and Graphics card connector. 48amp rail is nice as well. This power supply will last me for years to come and handle anything that I may upgrade to. Cables are very heavy duty for amperage and best of all, comes with a 5 YEAR Warranty from Antec. I've built computers for the past 15 years and always used Antec power supplies. I am still using my 9 year old Truepower Blue 450watt in my daughters case.

Overall Review: I've had very good luck with Antec and unlike some, I've never had a DOA or one go bad after a month or so. I always let the power supply burn in for at least 4 days steady running. Will only buy Antec power supplies.

Pros: Runs my gaming rig with no issues at all! Very silent as well. Specs below

Pros: This thing is quiet, durable and the semi-modular thing is really nice. I have 2 7850s, 2 HDDs and a SSD and this baby powers it all with room to spare.

Cons: None with the PSU itself. My mid size case is still crammed as hell even with the modular cables. I knew that when buying this PSU.

Pros: Worked as it should for approximately 60 days.

Cons: Initially, my PC failed to power up. After troubleshooting my connections nothing happened. 1 day later it started up but now will randomly drop power. I have checked everything out and this PSU is my problem. Reliability is a serious issue here, I will be disappointed if I have to spend another 100$ on a new PSU.