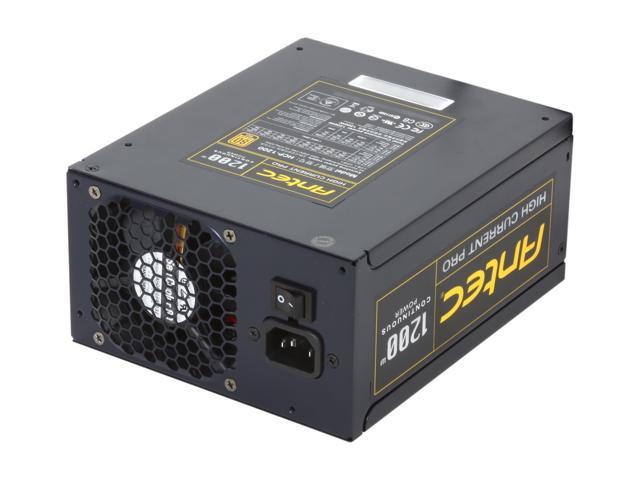 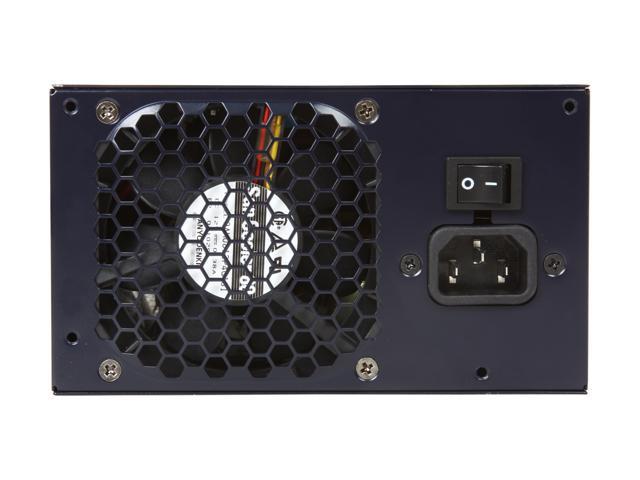 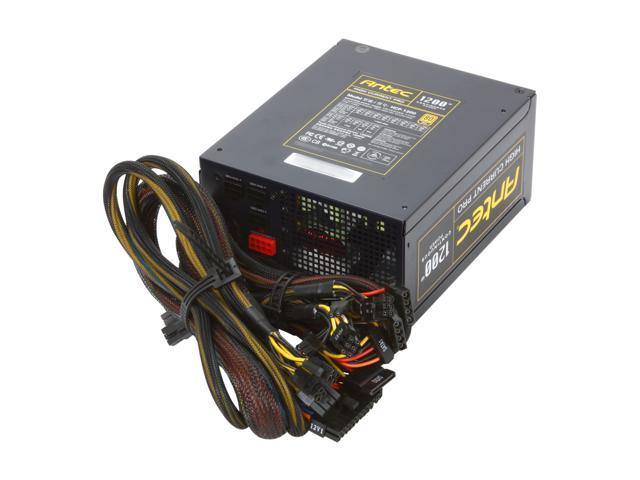 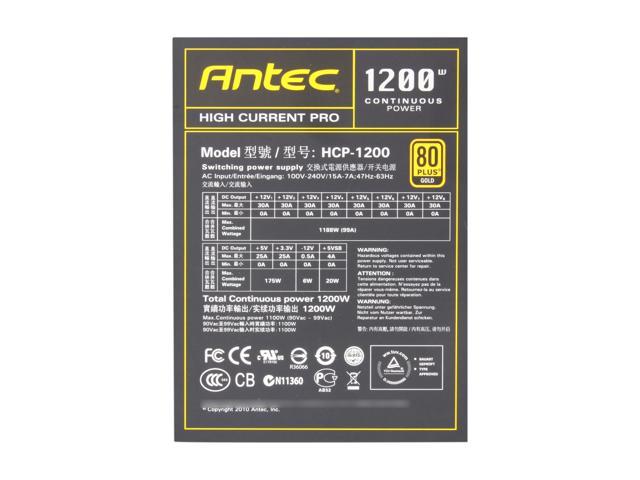 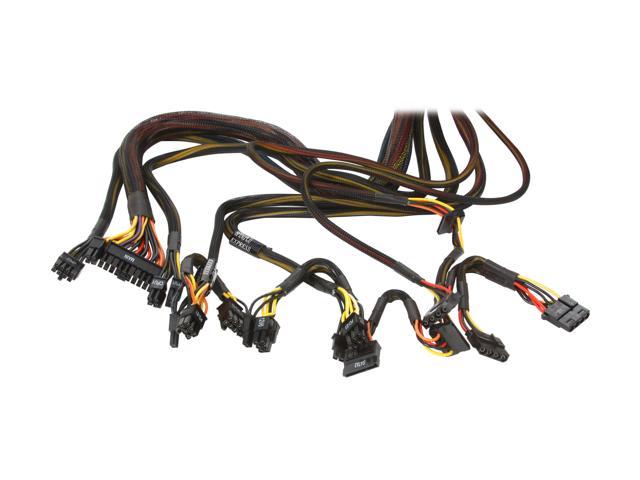 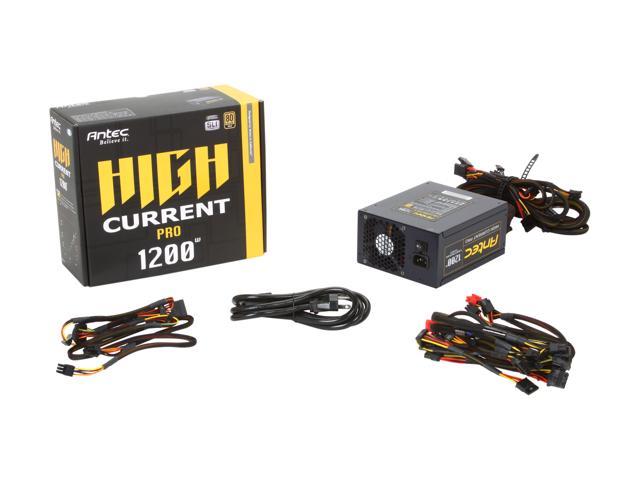 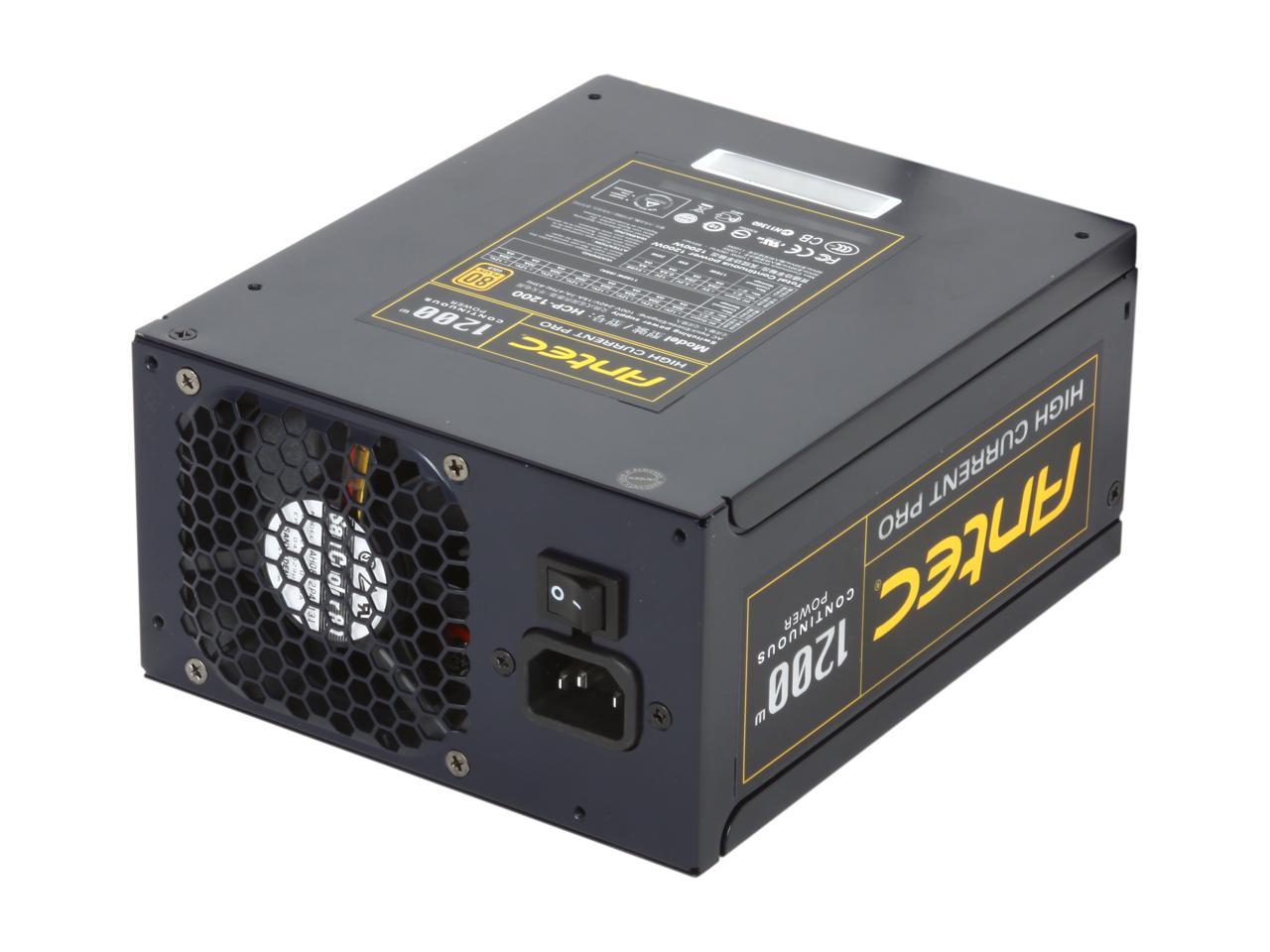 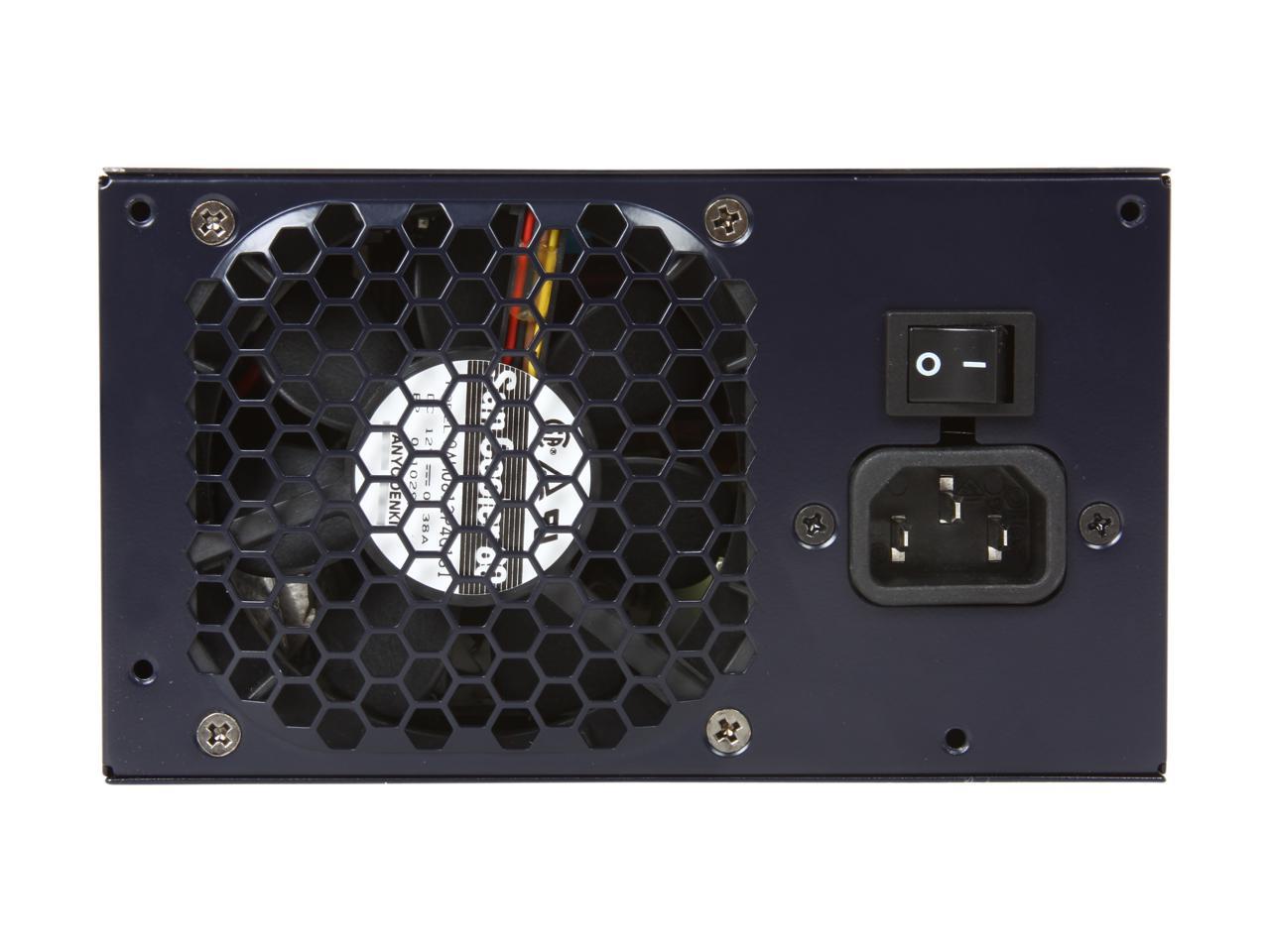 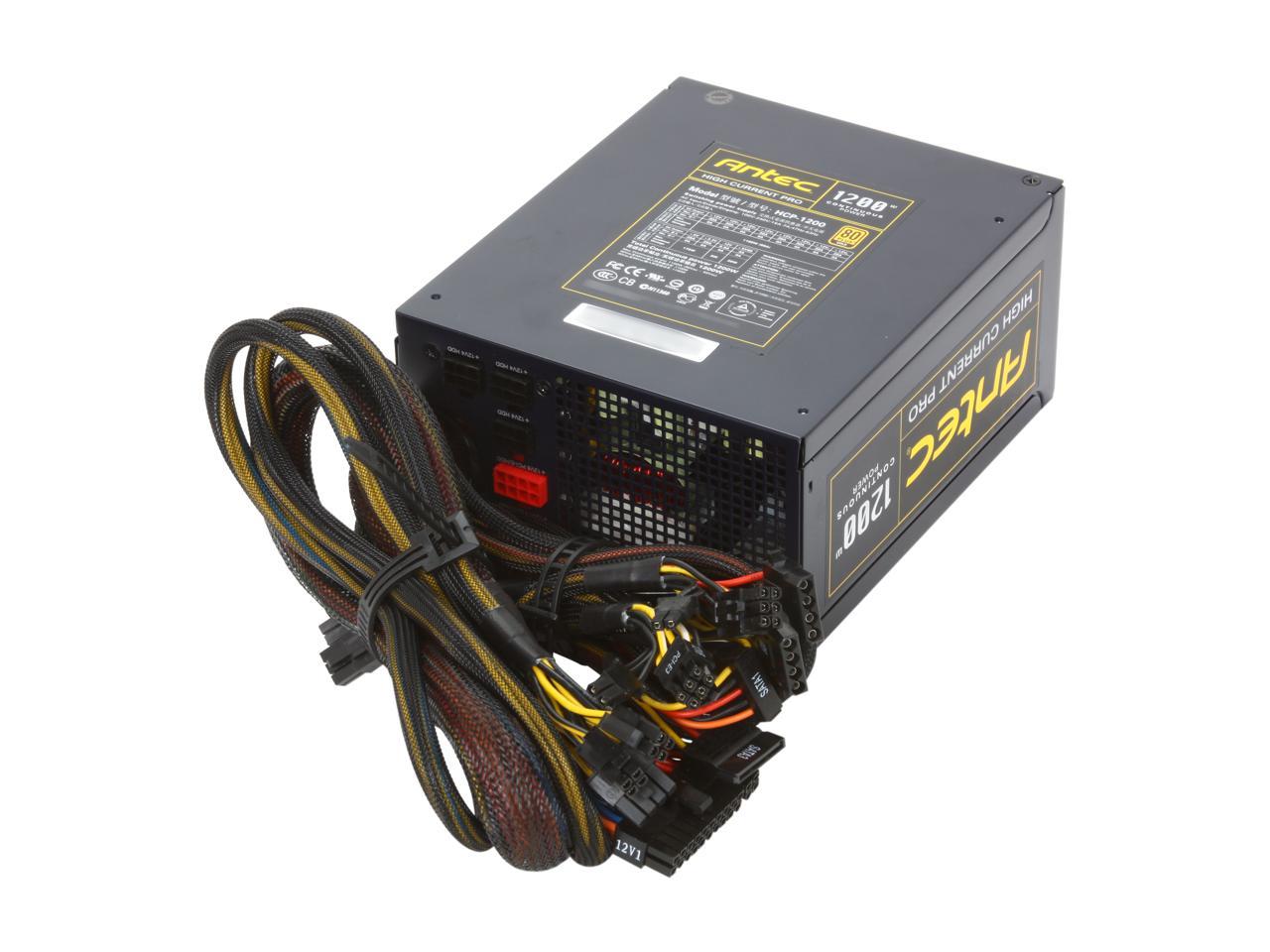 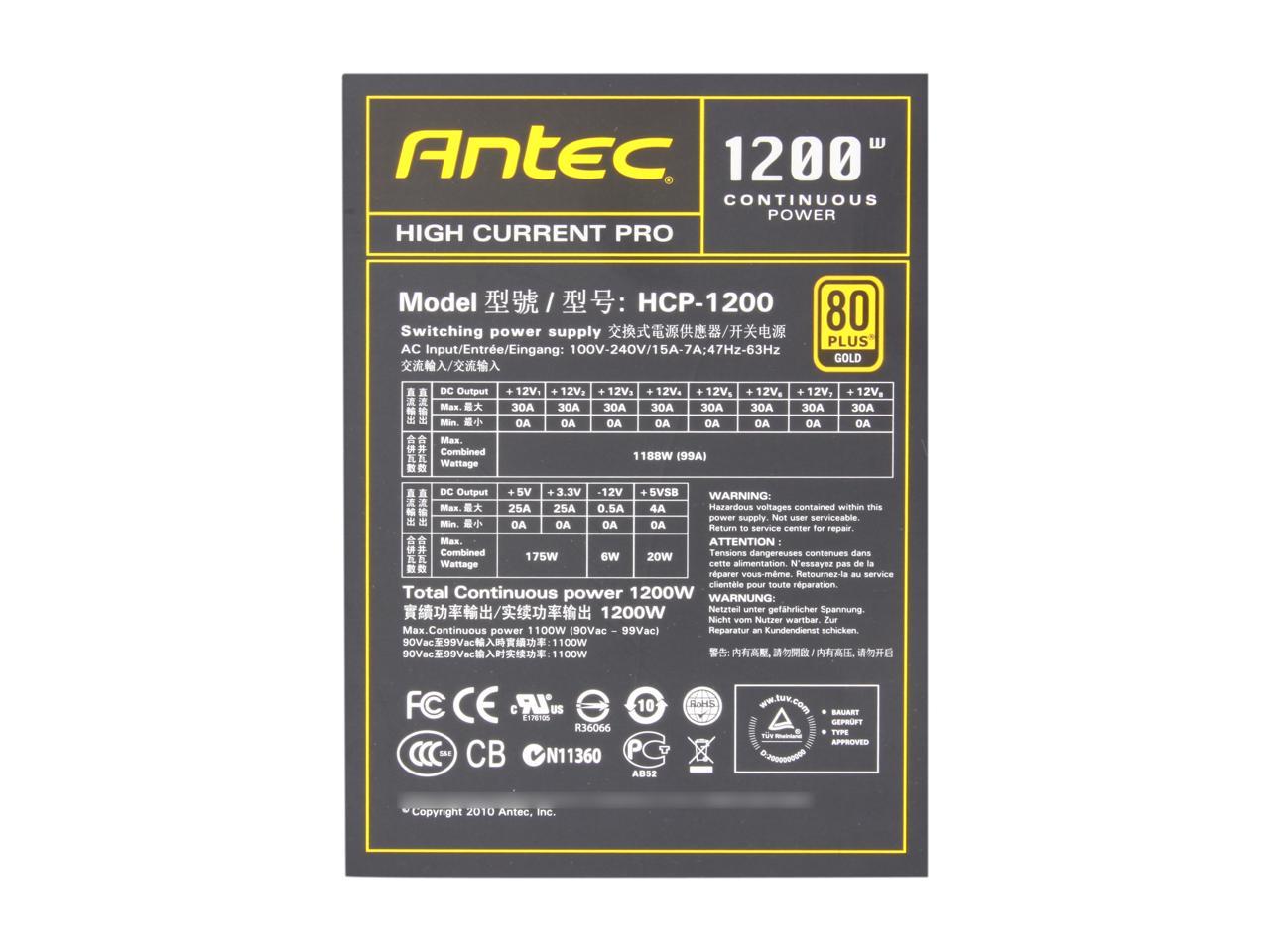 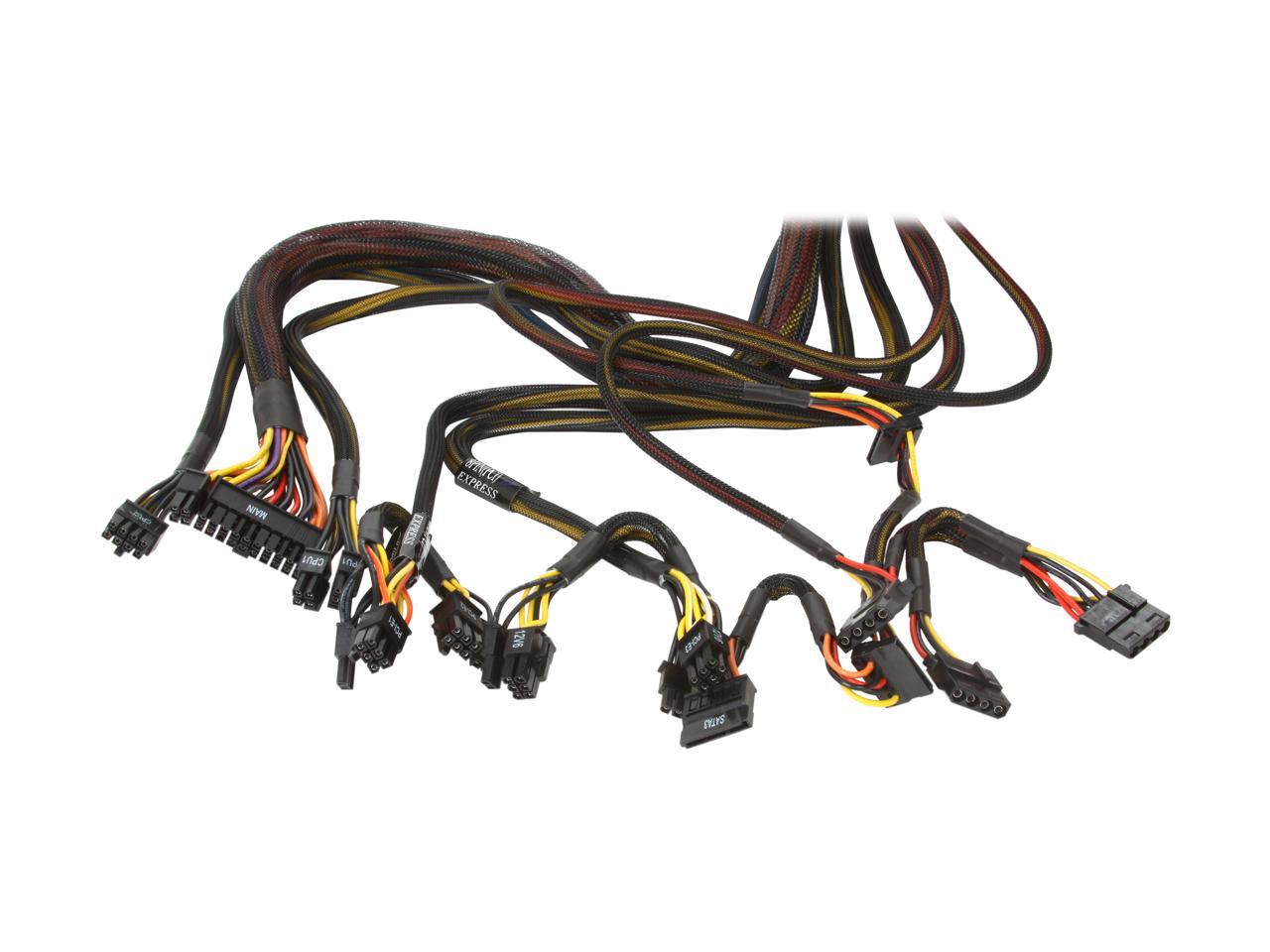 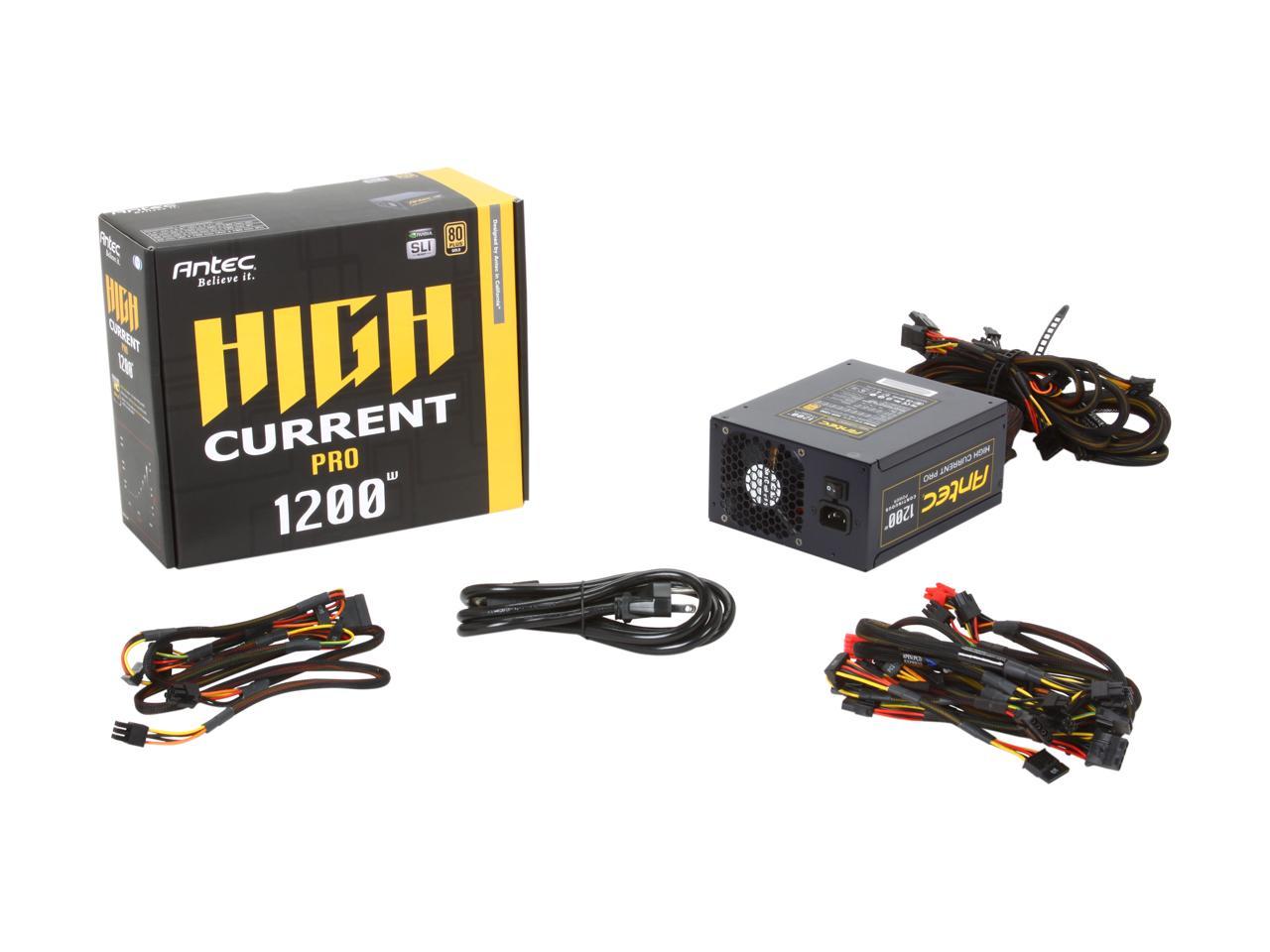 (56) Write a Review
OUT OF STOCK.
Overview
Specs
Reviews
Aiming for the high-end enthusiast market and for everyone seeking the best power supply out there, Antec's HCP-1200 unifies raw power with advanced PSU engineering to meet the demands of high performing PCs. A full-featured, 80 PLUS Gold-certified unit, the HCP-1200 is capable of outputting 99 percent of its rated power on its eight +12V rails, which contain high maximum loads to ensure graphics card compatibility.
Exclusive to the High Current series, the HCP-1200 boasts High Current heavy-gauge 16 AWG wiring that reduces conducted resistance, increasing efficiency and improving power delivery. In addition, a cool-running dual double-layer PCB and onboard DC to DC converters provide substantial voltage stability. To experience kilowatt-class power in an unmatched design, pick up Antec's HCP-1200. ion and mission-critical server applications.

Learn more about the Antec HCP-1200

Cons: Not fully modular. The string of molex plugs, for example, can't come off. Who uses molex these days? You just gotta tuck that one away somewhere. Also, even tho it's very quite, there doesn't seem to be any airflow coming out the back. Perhaps it the fan is an intake? I can't tell... but the metal doesn't get hot at all.

Overall Review: It may be coincidence, but a couple minutes after powering this baby up, the breaker switch on only MY office flipped at the same time my entire city block lost power for about 30 minutes. Haven't had any problems before or after this happened. O_O

Overall Review: This has nothing to do with this proudct,but I have a B#@$h,What is the IQ of the people who package these high dollar items they put the item on the bottom of the box with all the packing materal on top. This is the same with every purchase shiped to me. So far even with package damage no item has been DOA. Lets get with it New Egg and have some quality control within the shipping departments.

Pros: Ok. I guess I'll be the first to review this wonderful product. Not only is this power supply really quiet, it's tiny compared to the 850watt p/s that it replaced. I have now been able to improve both my cpu and SLI gpus overclocks. No "coil whine" like that AX model from C--s--r.

Cons: The 1 page instruction sheet that comes with the HCP-1200 tells you not to install it until you have downloaded and read the complete manual from Antec's website. I only problem is that the manual was not available when I looked 2 days ago. Normally, this wouldn't be significant, however I heard that this p/s has been in development for more than a year.

Overall Review: Well worth the price! This is definitely the best 1200watt p/s available at the moment. - definitely a must buy!

Manufacturer Response:
We apologize for not having the manual online at the time you purchased your HCP-1200. It's now available at the link below!

Pros: Powerful but small. Amazingly quiet for its small Fan.

Overall Review: I agree very much with what another reviewer here said, when I opened the packaging I thought "this thing is only partially modular" but then I ended up using all of the non-modular cables anyway. Also the extra pcie power 6+2 pin cables were a bit stiff. I was using a thermaltake toughpower 875 and it was MUCH louder. I haven't even had the fan running past idle using an i7950(3.8Ghz) and GTX580 + watercooling + 3 hard drives playing Crysis. I would buy this power supply again and recommend it to others.

Cons: None that I have found as of yet.

Overall Review: non modular cables include 2 x 8 pin cpu power cables but I used both of them in my rampage 3, if you have a lesser motherboard the extra 8 pin cable will have to be tucked away

Pros: Lots of cabling, more PCIE cable connections than I will ever hope to need, quiet operation.

Cons: Not 100% modular, but anyone buying this sort of power supply will use any cables that are hardwired to the unit, and then some. PCIE cable extra pin connectors to make a 6 pin into a 8 pin were pretty stiff and hard to connect.

Overall Review: This power supply is being used in a i7-920 system overclocked to 3.8 GHZ, 2 GTX 580's in SLI, and multiple hard drives and fans. It has, so far, run everything flawlessly. It is MUCH quieter than the 1000 W PSU it is replacing, especially no (very annoying) high pitched whine noise when stressing the GPU's. Actually, every previous high wattage PSU I've used has had that noise, so I thought it was normal, until I started using this one.

Pros: Got my new HCP-1200 and first thing I noticed was the quality packing. The PSU itself comes in a fabric bag and all the extra modular cables in one too. Installation was a snap, with all the cables labeled, and wrapped in a mesh covering. I run some IDE and some SATA, so all the different cable choices were key. I was very pleased that some of the cables I was definitely going to need were hard wired into the PSU. This kept me from having to pull the supply after install to readjust which cables I needed to have connected. The great thing is, I didn't have to stuff a bunch of extra cables into my drive bays, because any "extra" cables I needed I would choose to add using the modular ports. After firing up the PC, I immediately noticed it was significantly more quiet than my previous 650W. This is huge as it is in my living room, and I haven't noticed any variations in its noise output either, quiet all the time. I've added some energy efficiency to my family with a lower TV vol

Cons: So far I haven't run into anything I don't like about this Power Supply.

Overall Review: All in all, this is a fantastic choice for a power supply, especially if you run any sort of SLI configuration or have multiple hard drives. I debated long and hard on whether to invest in the HCP-1200, and I am so happy I did, because now I can plan system expansions without having to worry about my power supply again. I would recommend it, and look forward to expanding to an SLI config now that I have it.