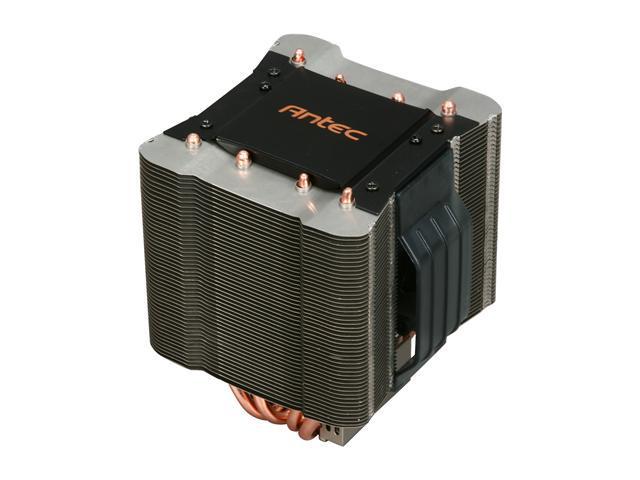 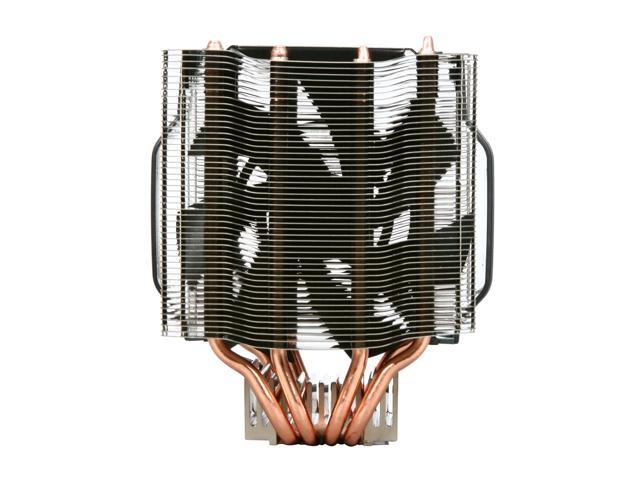 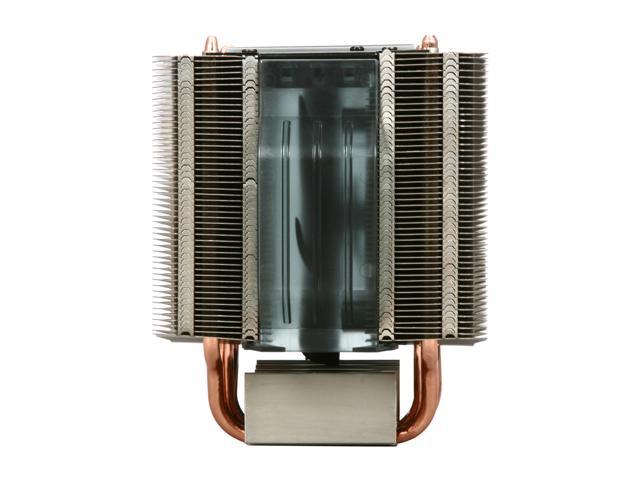 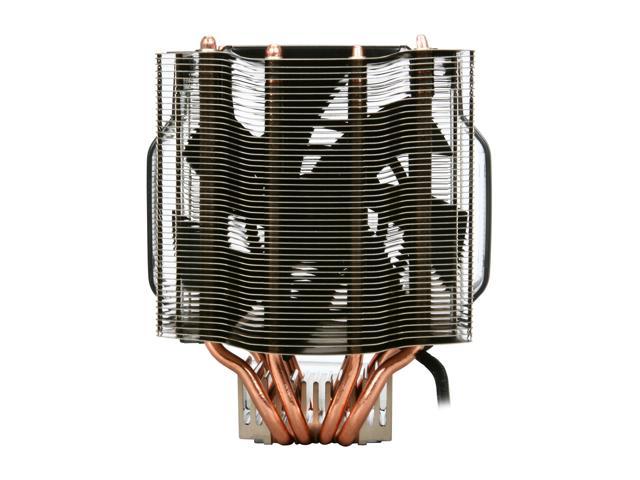 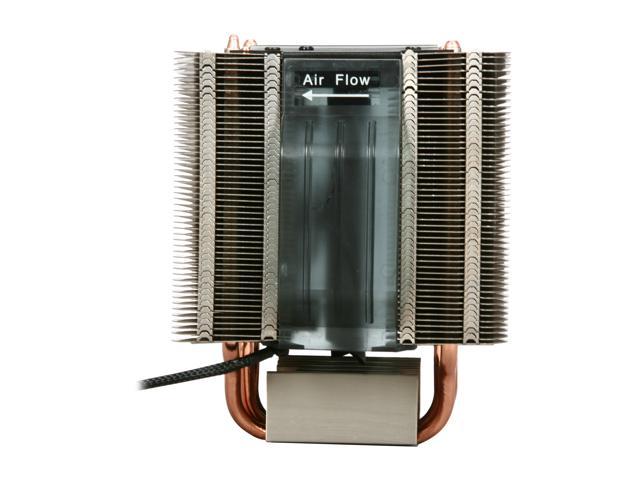 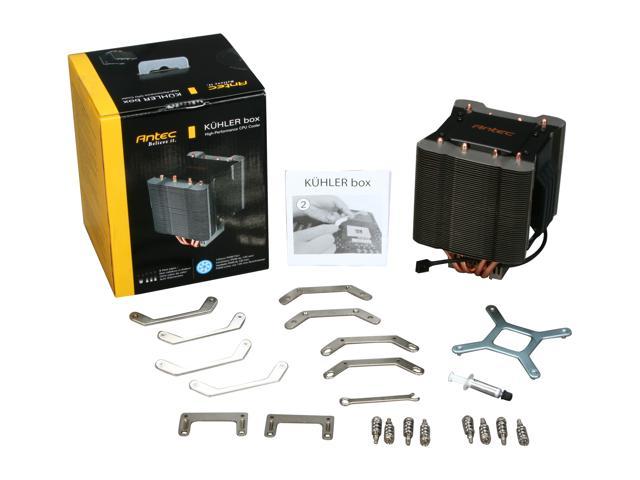 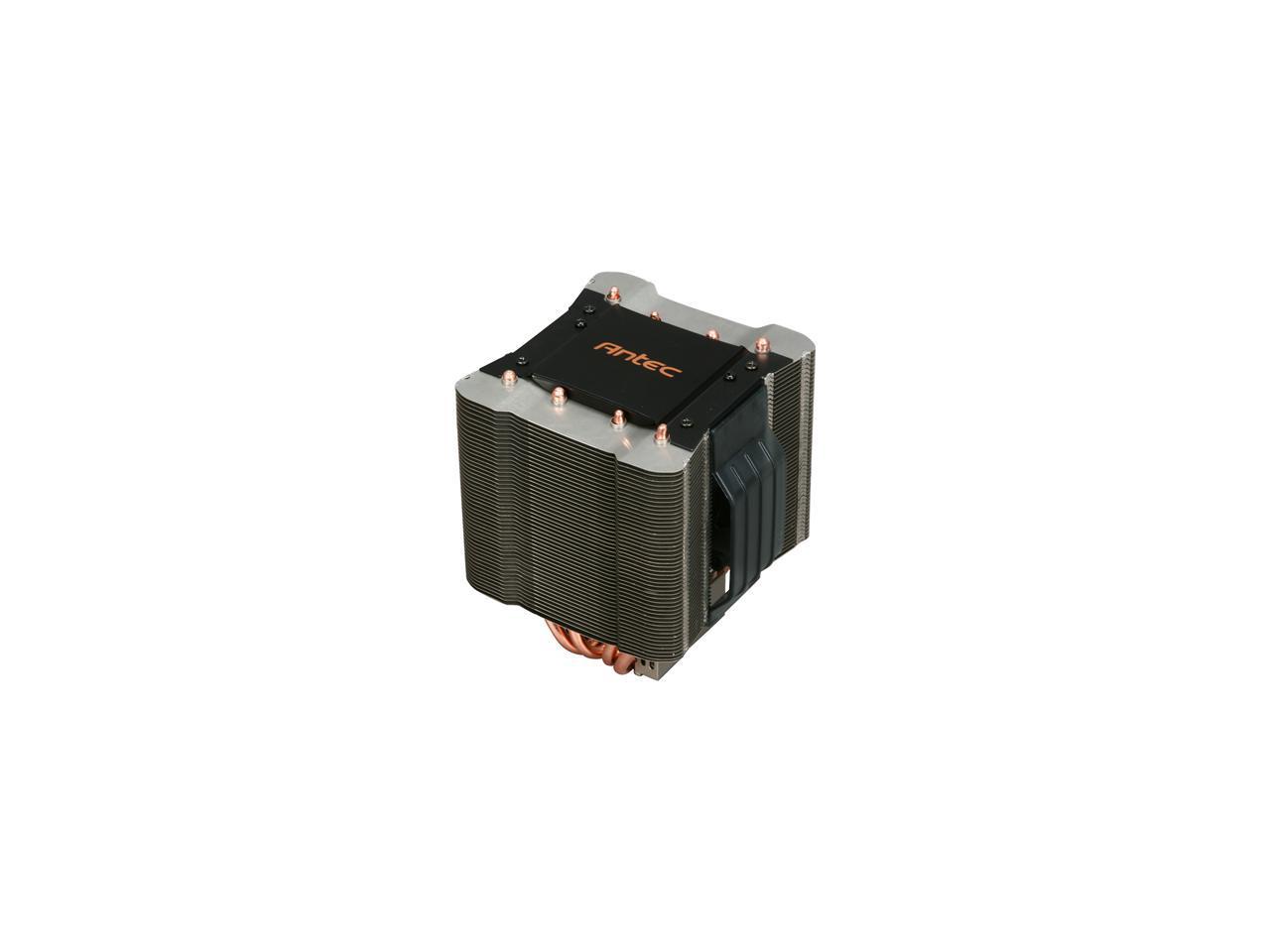 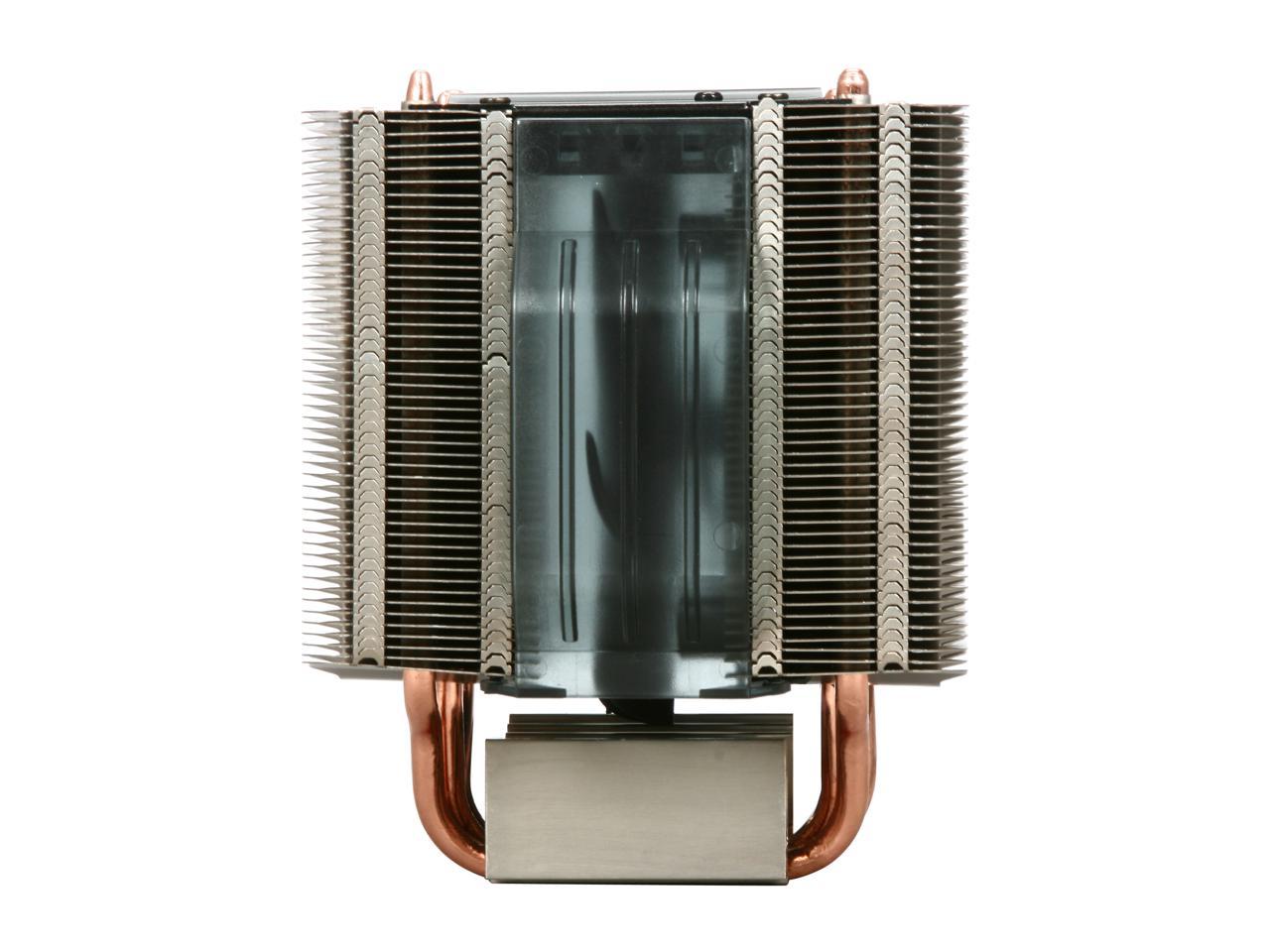 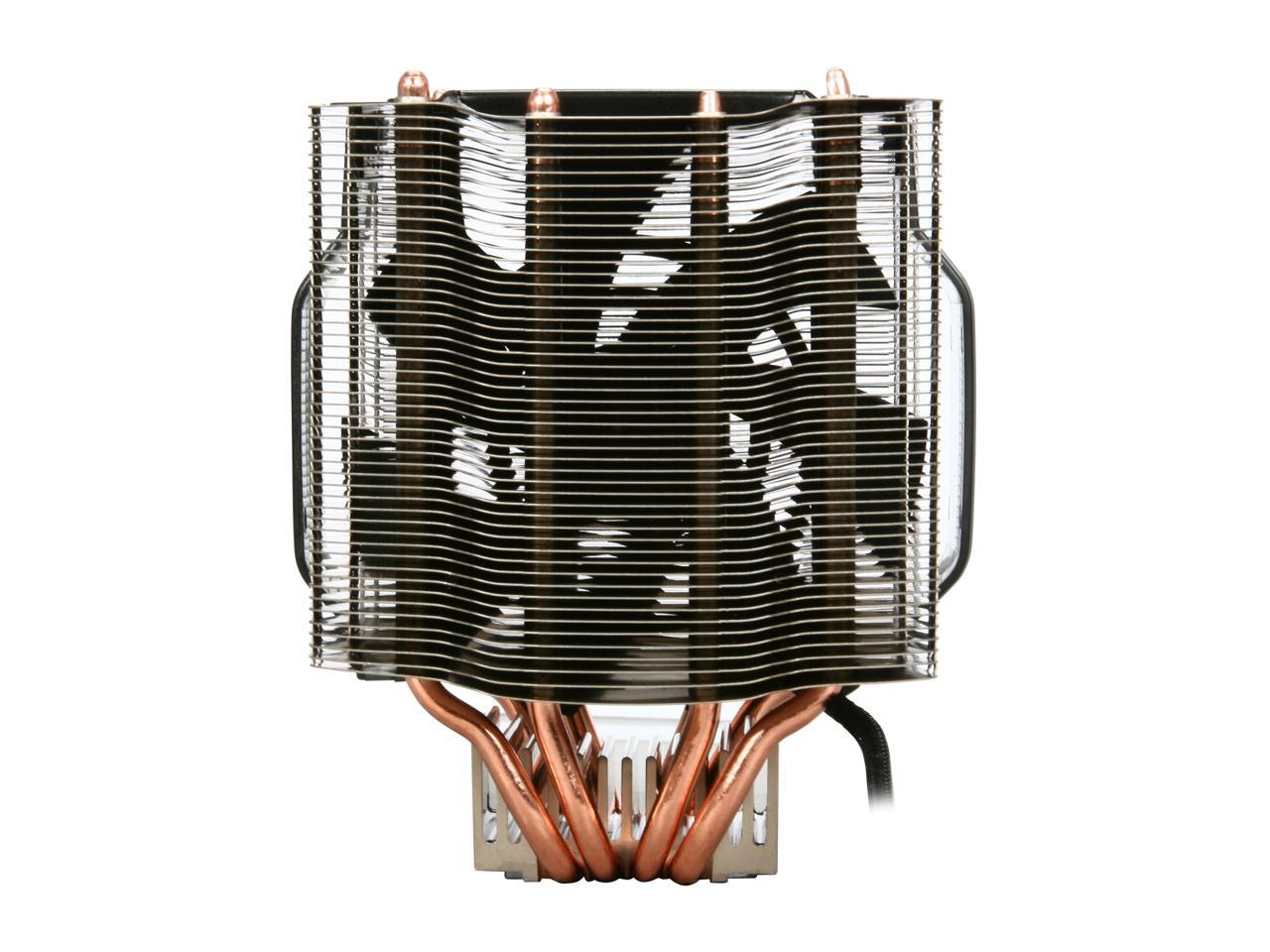 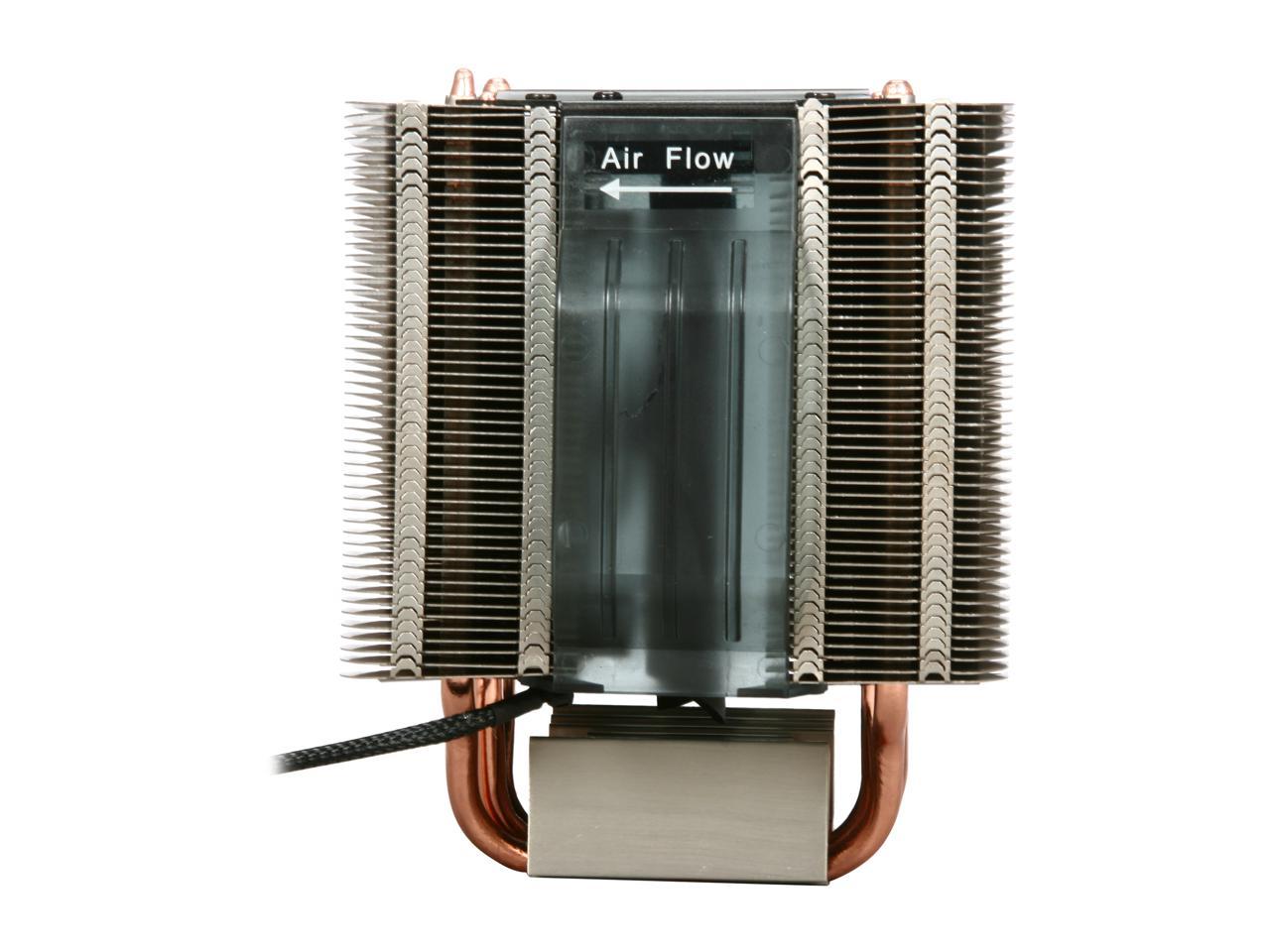 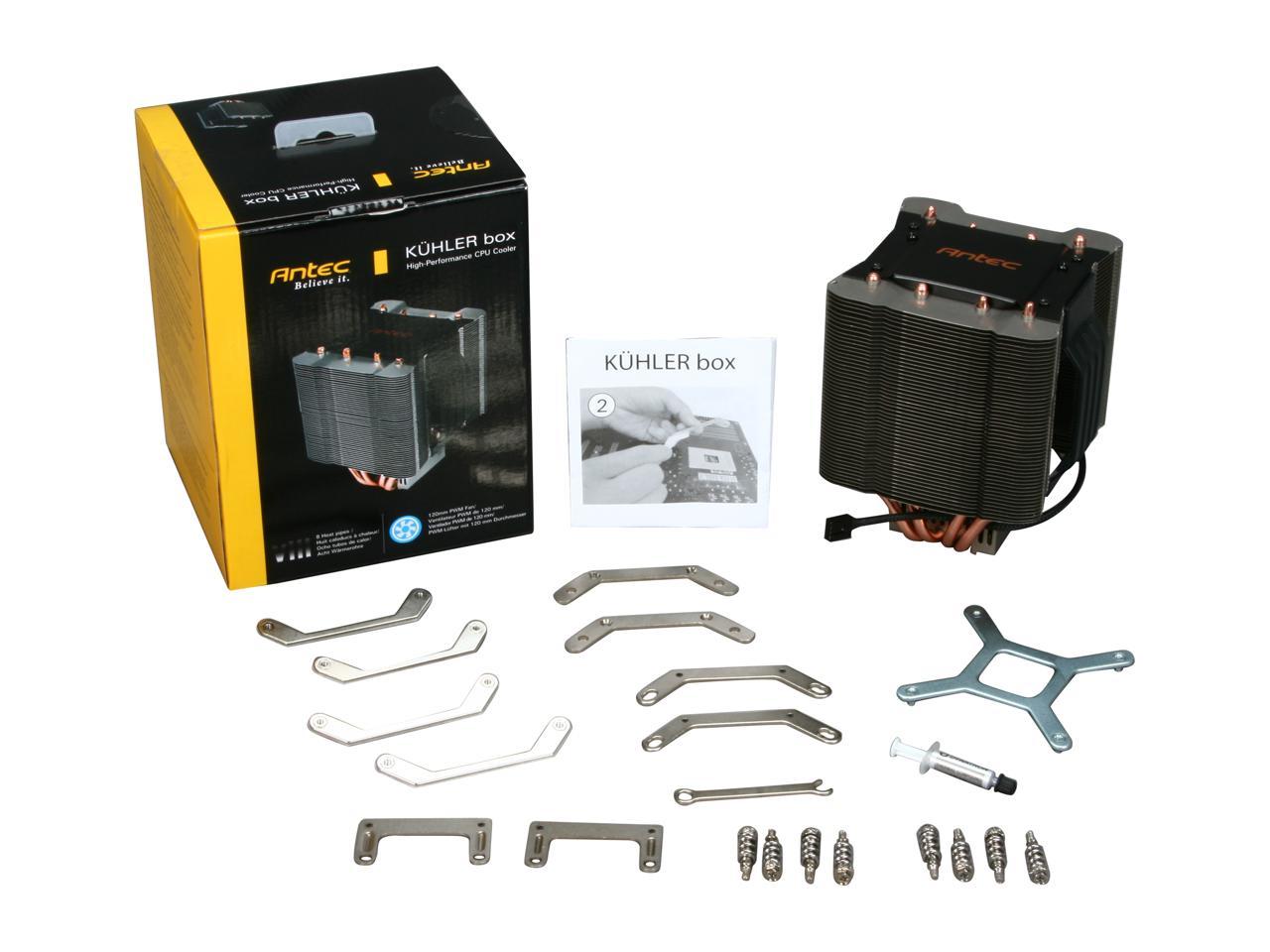 (18) Write a Review
OUT OF STOCK.
Overview
Specs
Reviews
Defeat heat created by your processor and allow for improved operation with Antec's KÜHLER box. Designed for compatibility with leading desktop processor sockets, the KÜHLER box supports Intel Core i7, Core i5 and AMD Phenom II, among others. This high-performance CPU cooler features a whisper-quiet 120 mm PWM fan positioned between two massive heatsinks with eight embedded heat pipes, achieving maximum heat transference. And, it's never been easier to mount your CPU cooler; Antec's KÜHLER box comes with an easy-installation kit with included mini-wrench for simple, fast and frustration-free set-up.

Pros: Keeps my CPU from overheating... it really is an awesome cooler.

Cons: Poor instructions and difficult to figure out how to install for the AM3 motherboards.

Overall Review: To install on an AM3 mobo- 1. Remove mobo from computer 2. Remove stock cooler bracket from mobo 3. Flip backplate that was conected to bracket over so the threaded holes are closer to the top side of motherboard 4. Compress the springs on the Kuhler Box AM2 screws with a pair of pliers 5. Attach the AM2 braces to the botom of the Kuhler Box 6. Apply thermal grease to CPU that should already be inserted on mobo. 7. Place Kuhler Box on CPU and line up with the holes on the mobo where the original bracket was and make sure the back plate is also lined up so you can see the threaded holes 8. Screw in the AM2 screws starting with one in the front and one in the back- tighten slightly and then screw in the other two screws 9. Tighten all of the screws until they won't turn with normal pressure 10. Insert mobo with Kuhler Box in case I hope this helps those who want this awesome cooler for their AM3 board. Don't be discouraged, it's easier than it sounds to install.

Cons: After the manufacturer response stated that I should contact them using the "special" VIP@antec.com address, I did just that. In a very proffesional and civil email I told them that I had already replaced the heatsink with a different design (PWM fan clip-to-front) and would not be using their replacement policy, since that would just leave me with a superfluous, homeless heatsink. I invited them to make another arrangements, suggesting that if they paid for the shipping (UPS call-tag, not difficult to arrange at all), I would send it back for a refund in the form of a check or pre-paid debit card. I also stated that I fully understand that, sometimes, a faulty product will make it past QC and that I've bought other Antec products in the past with success and didn't hold any grudges with the company. They could have responded and told me if those terms were acceptable or if they would refund it as long as I paid the shipping costs, but they didn't respond at all.

Overall Review: Basicly the "Manufacturers Response" is a sham. They only post it to look good to the people reading the reviews, but have no intention of actually following through with the correspondence. I would have understood if they had responded and told me that they could only do this or that in accordance with their return policies. After all, they're a business and their goal is to make profit and minimize loss as much as possible, but it's been 3 weeks and I still haven't got a response. Clearly, they just don't care. The "Manufacturers Response" was just a tool to maintain an *image* of service, nothing more, and with no intent to actually improve service or relations.

Pros: This cooler does an excellent job of keeping my AMD Phenom X6 1090T processor running nice and cool. With 8 heat pipes and a 120mm fan at the core, heat has not been an issue. Even with the processor overclocked at 3.5Ghz, the processor under full load stays below 40c.

Cons: The cooler itself is massive. With it installed, I'm unable to install a memory stick in the first memory bank. It would be a challenge to install in most cases. When installed, motherboard to the end of the cooler measures about 6.5". As others have mentioned, the mount kit is a bit lacking for AM3 processors. In the end I had to utilize my existing backplate (came with the mobo) as none of the provided brackets seemed to line up.

Pros: This heatsink is absolutely amazing. As soon as I got it out of the box, I realized, "I may not have a big enough casing to house this badboy." Sure enough I did, as soon as I noticed that the aluminum and copper barring that is fused together, I knew it was an Antec work of Art. Using 8 copper pipes strung in an interlaced pattern throughout a strata of thin aluminum plates surrounding a high RPM fan which sucks air in from the HDD and blows it not only OUT the back of the case. But it also blows the majority of air throughout the case from the four corners. Silent, extremely silent and my CPU refuses to hit higher than 33DegC. Incredible, even overclocked at 3.4Ghz running my system at full specs. Absolutely irreplaceable.

Cons: The only problem I had, and it's most likely either 1: I tightened the screws just a tad too tight on initial use. or 2: Wrong motherboard for this heatsink. The heatsink is actually so wide that it covers to of my DIMM slots on my MSI 790FX-GD70 AM3 AMD 790FX ATX AMD Motherboard. Which is not necessarily a problem depending on the size of your memory. However, in my own personal case, I'm using Corsair Dominator ram, with the struts, the memory wouldn't fit underneath the heatsink if I tried my hardest. Definitely not a con however, I would not downrate at all because not everything fits everything. Be careful, make sure you have the correct CPU/motherboard combination, made the mistake on my last heatsink, there were not mounting for my specific model, wasted quite a bit of money.

Overall Review: Adds quite a bit of extra weight, also, Antec could work on making the installation card with words and pictures instead of just pictures. Since the picture they used was for an Intel board, I was slightly confused when configuring attaching the mountings for an AMD board.

Cons: The directions are absolutely horrid. Its a photocopied piece of paper, with just pictures on it. It's easy enough to figure out how to install after looking at it for a bit, but the mounting brackets in my kit don't fit an AMD board.

Overall Review: Antec support has been non-existant, I held off on the review after opening a ticket for clarification on an AM3 install, which this is supposed to be compatiable with. After 2 weeks of no replies, I have to assume I'm not getting an answer.

Pros: Never got to use it.

Cons: No intel installation kit. I couldn't get it in because there were two AMD install kits, but no intel and no mini wrench and nothing besides the thermal glue and AMD hook-ups. I dont want an RMA bc I just need the intel install kit.

Pros: The heat sink is what it expected it to be, cooler.

Cons: Have an ASUS Maximus IV Gene-Z/GEN3 LGA 1155 Intel Z68 HDMI SATA 6Gb/s USB 3.0 Micro ATX Intel Motherboard. Can't just place kuhler brackets at bottom of motherboard as instructed. One bracket I had to modify in order to fit properly. Was easy with the right tools, but would be impossible without. Not sure if any non stock heat sink would be compatible with this particular motherboard so I can't give it a minus eggs for that.

Overall Review: If you are using an lga 1155 motherboard, 1156 is same for no stock heat sink. My asus mini lga 1155 z68 was just not expecting bracket area to be occupied. If you own any asus z68 lga 1155 mobos check the back make sure area is not occupied.