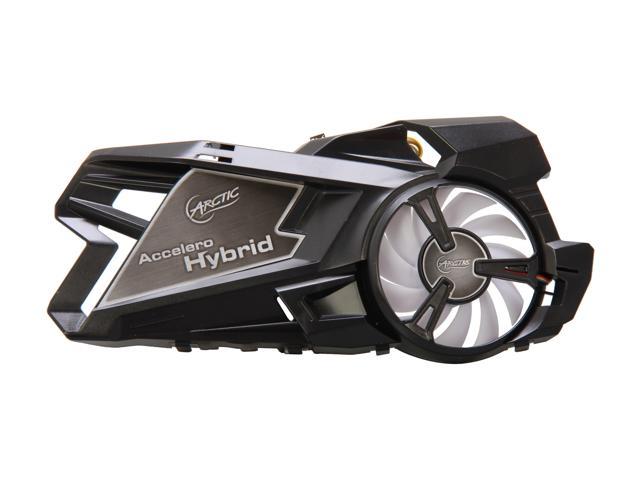 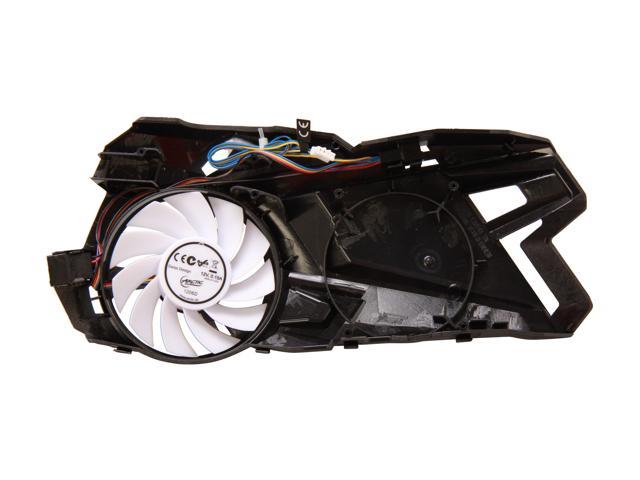 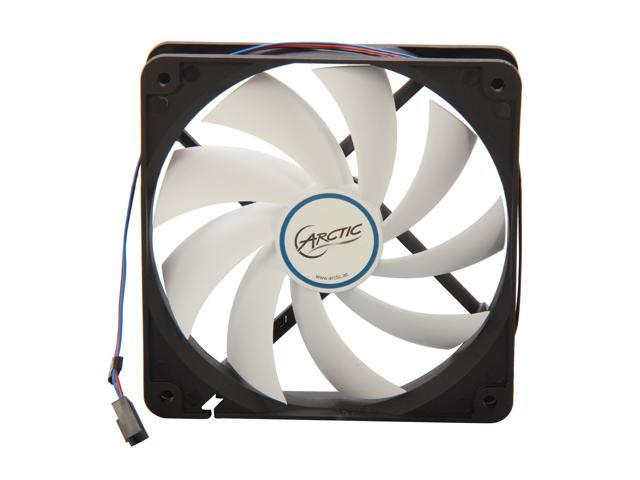 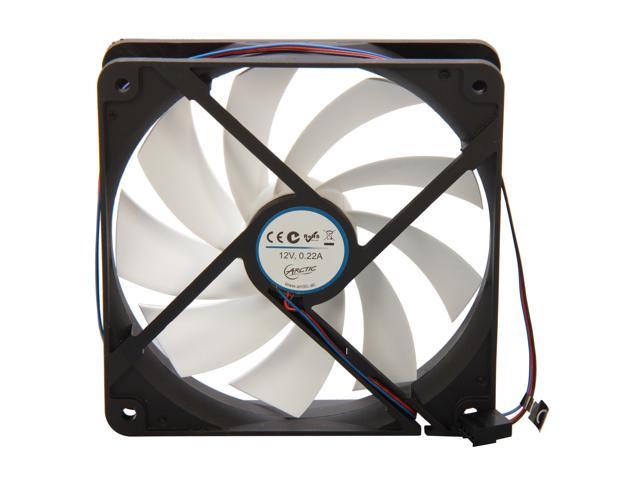 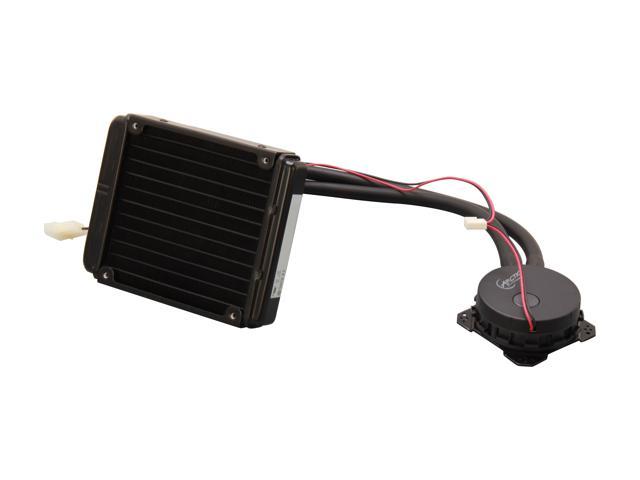 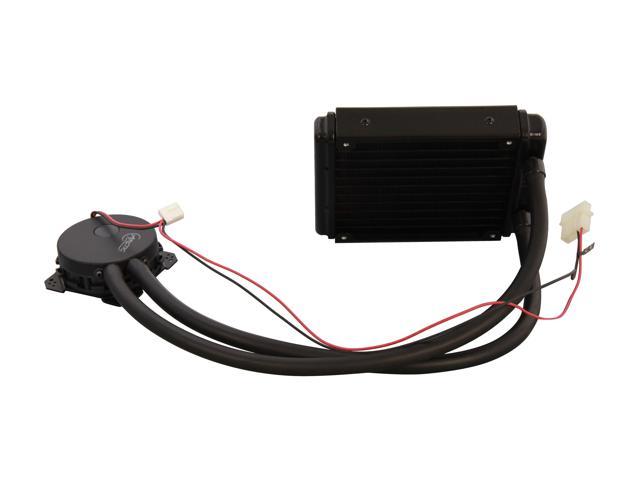 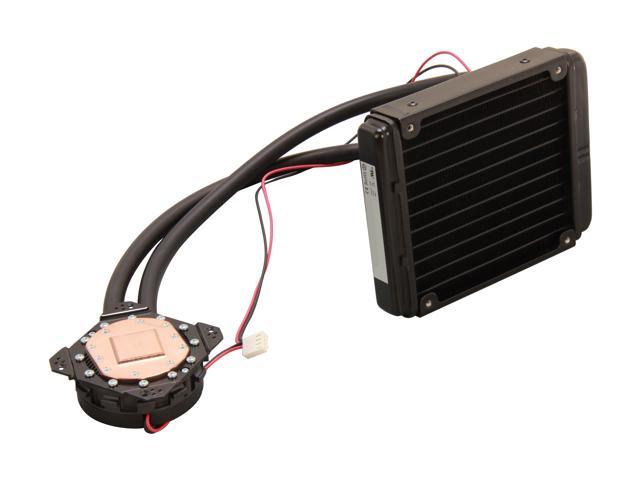 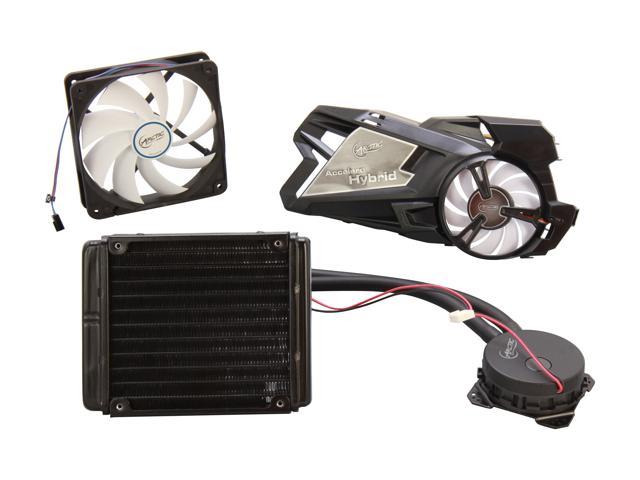 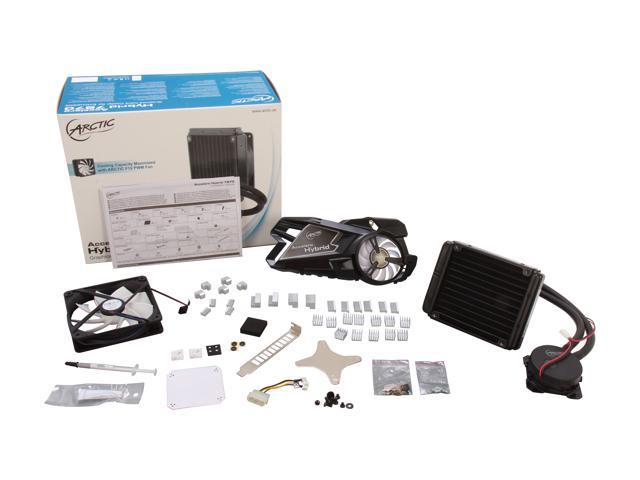 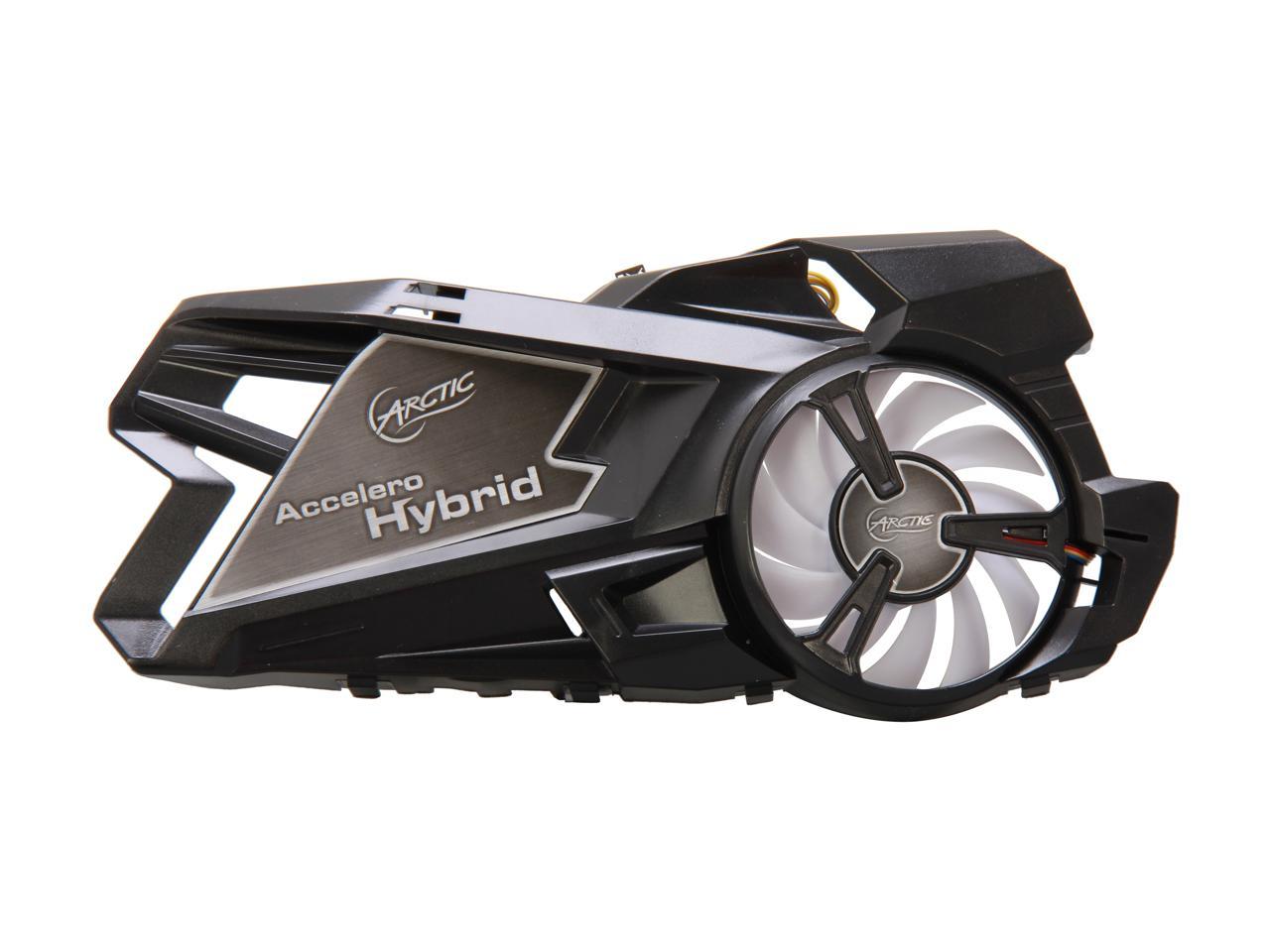 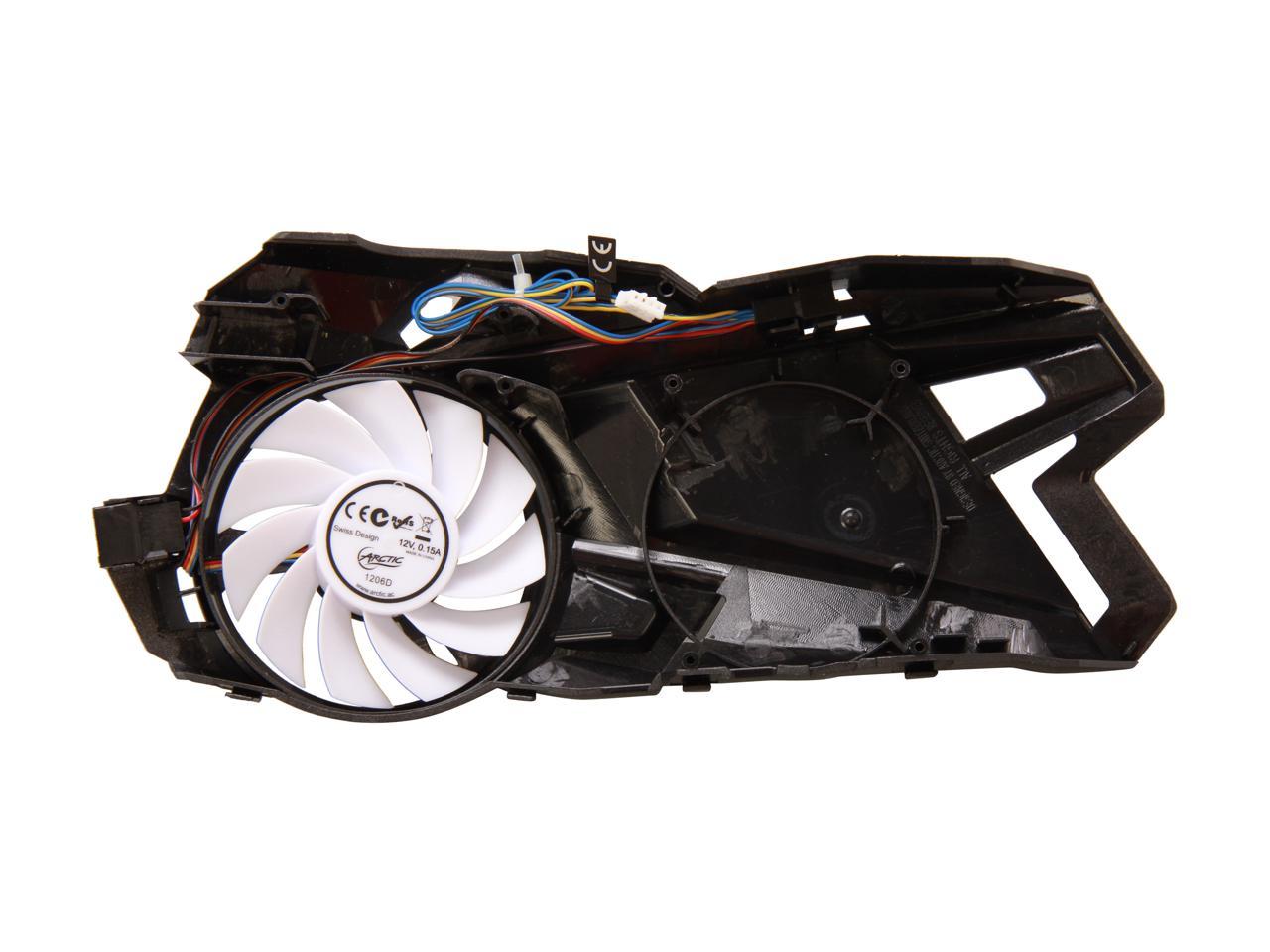 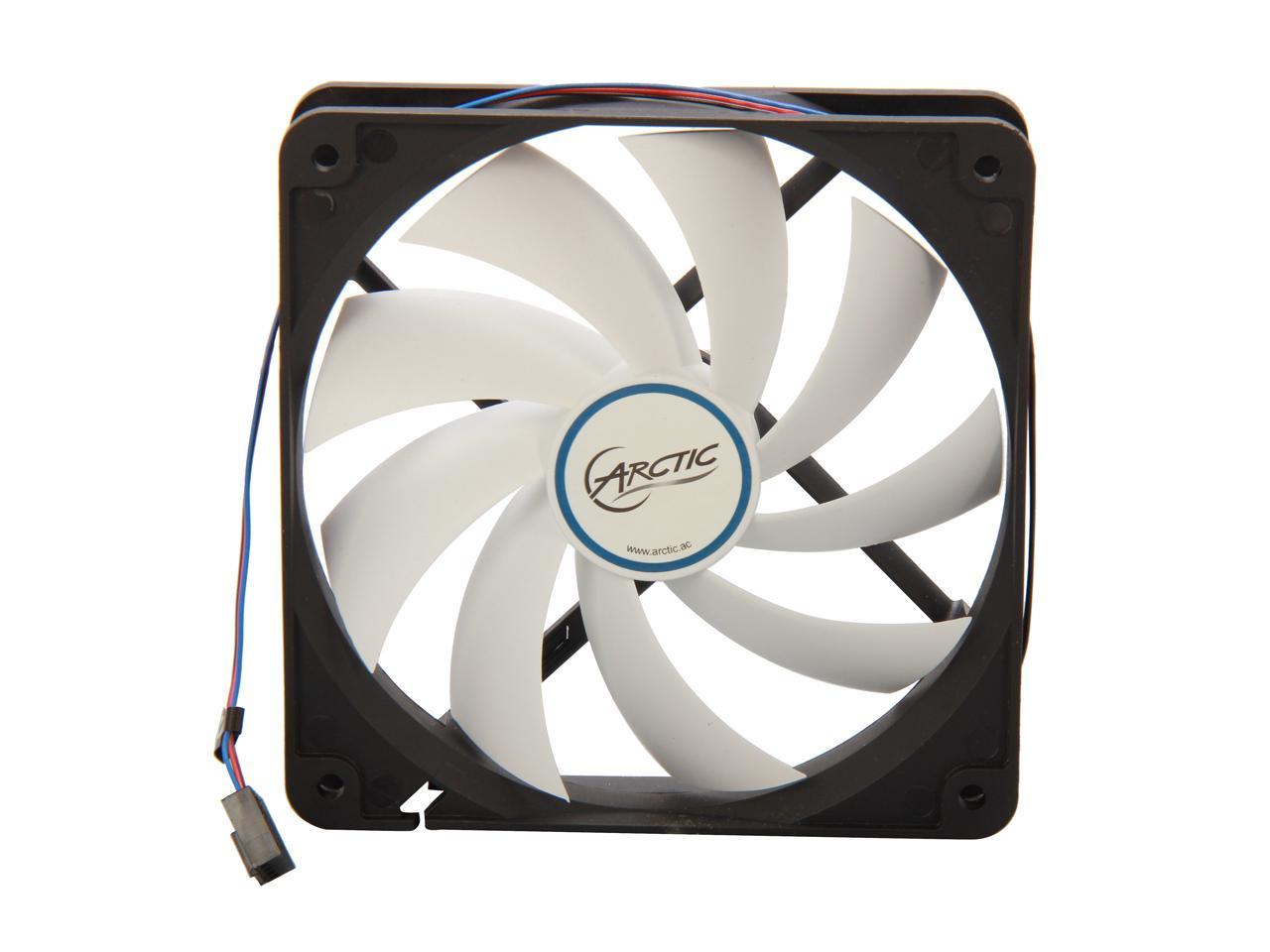 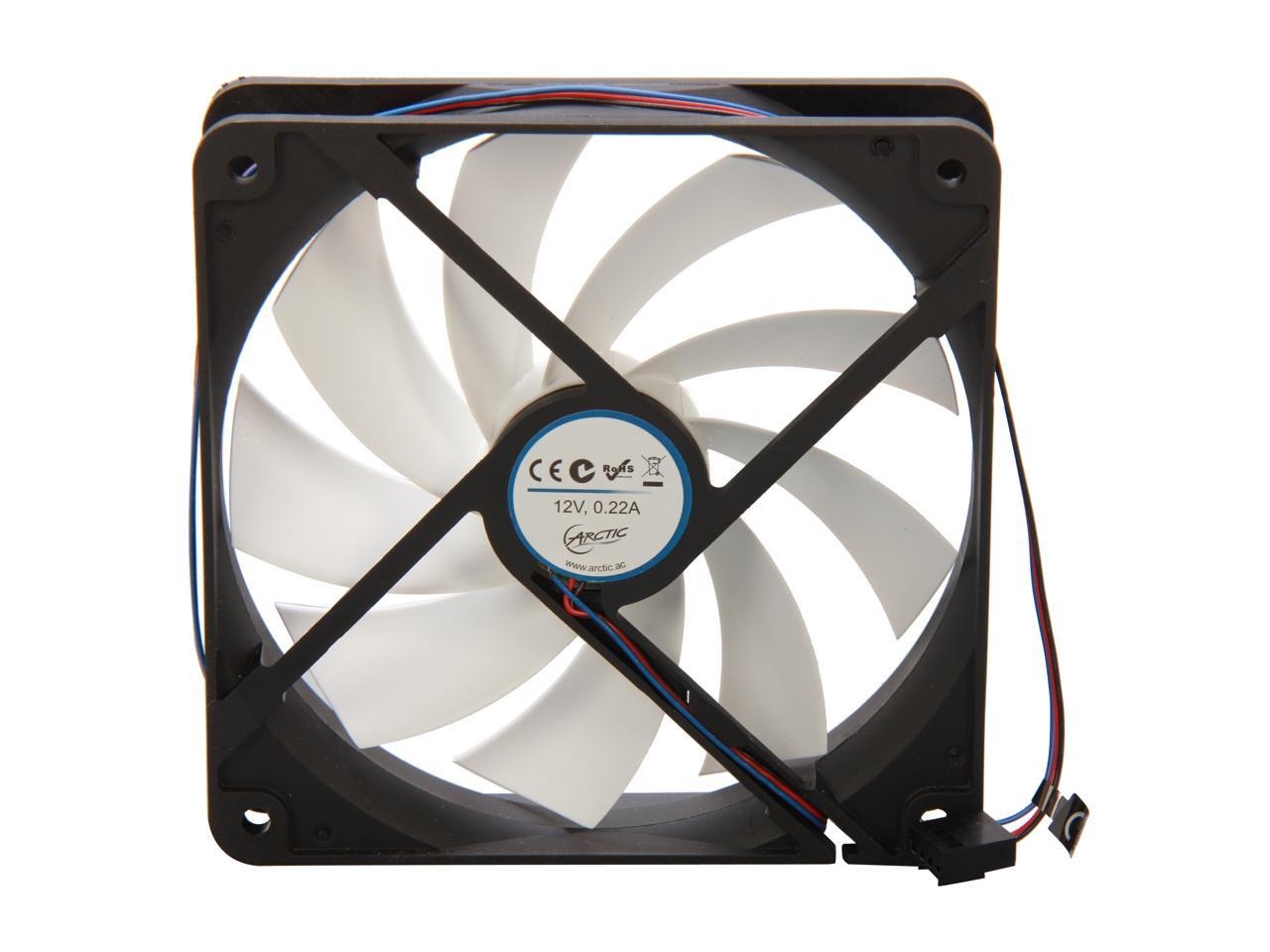 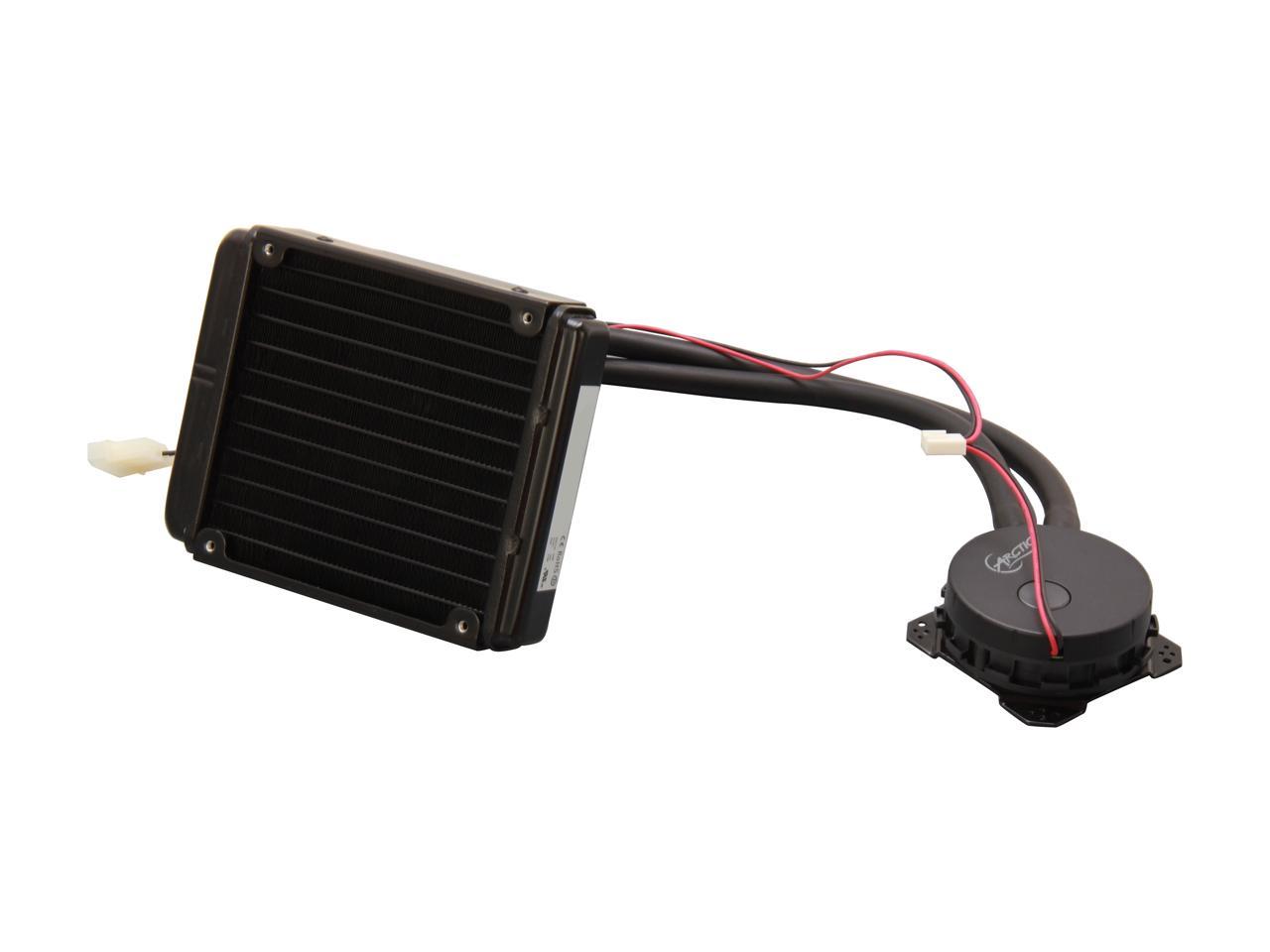 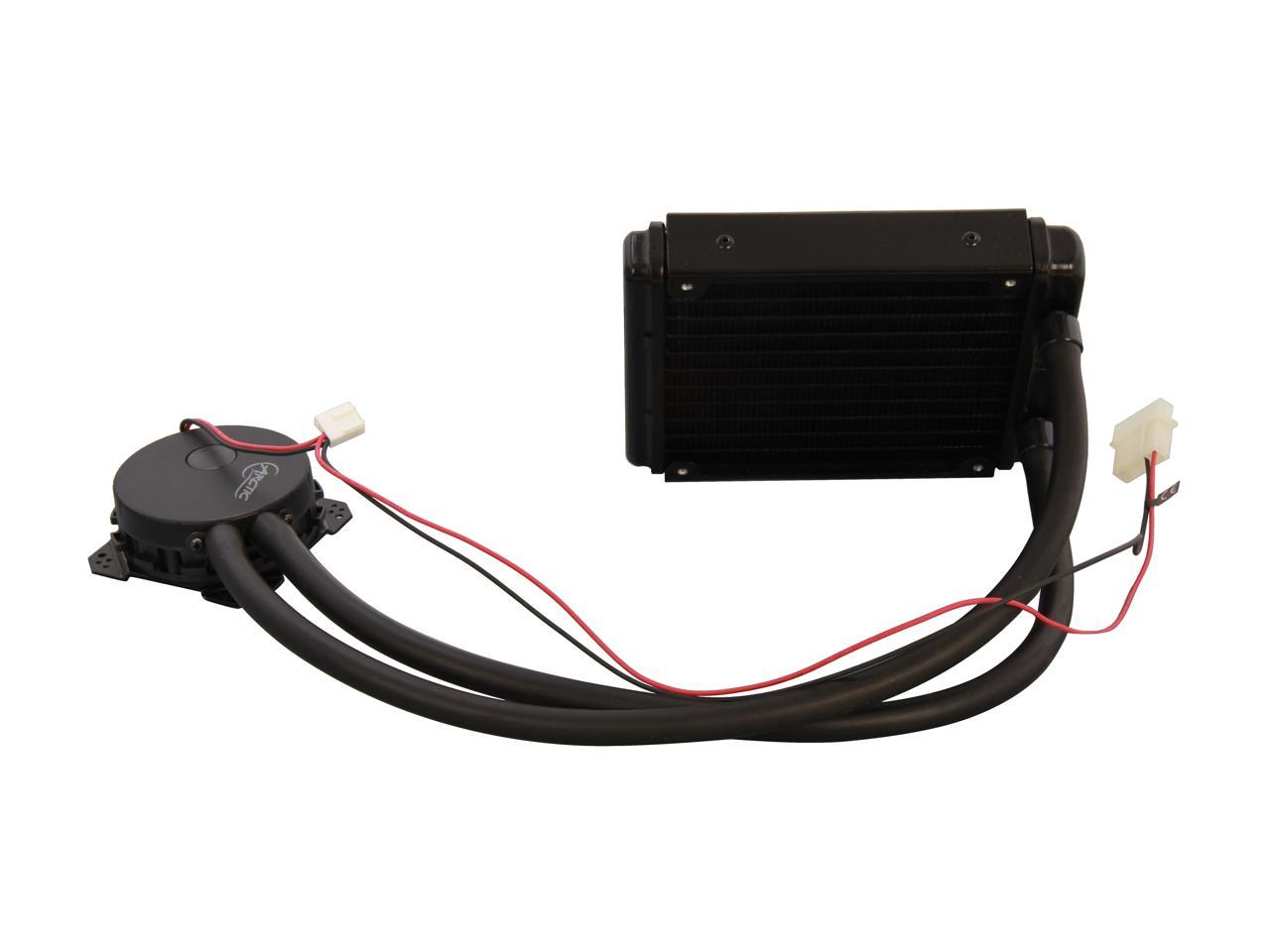 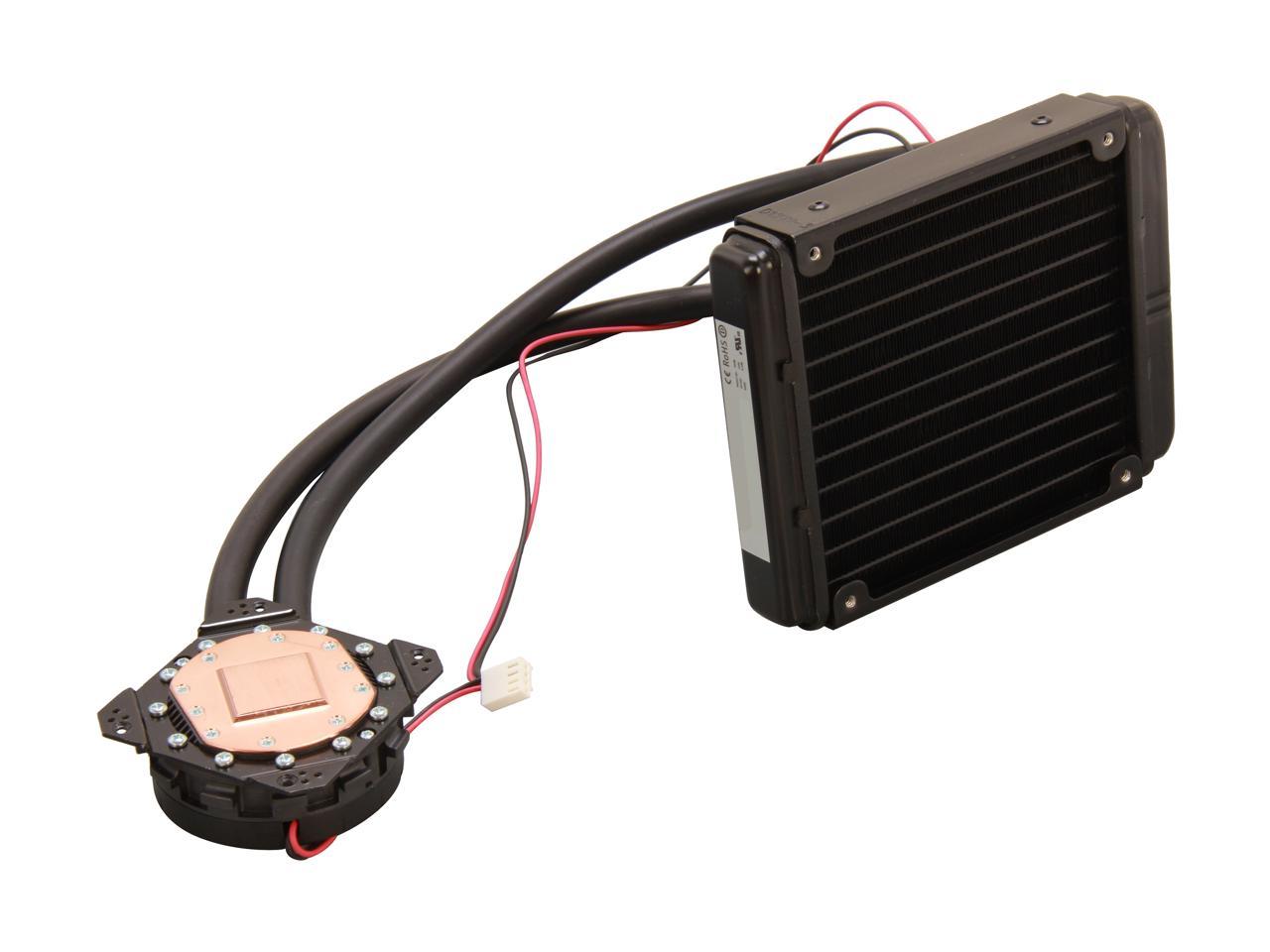 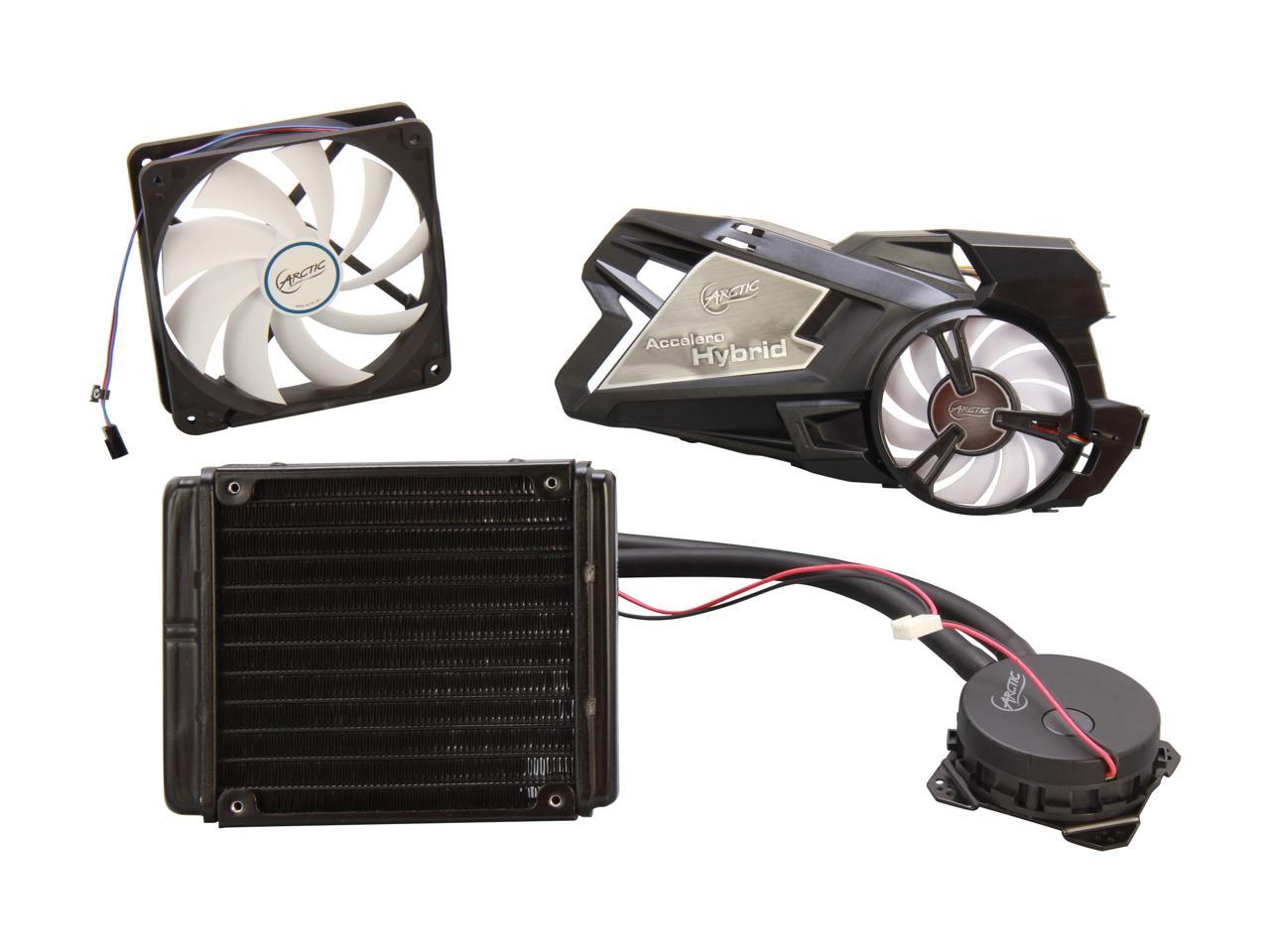 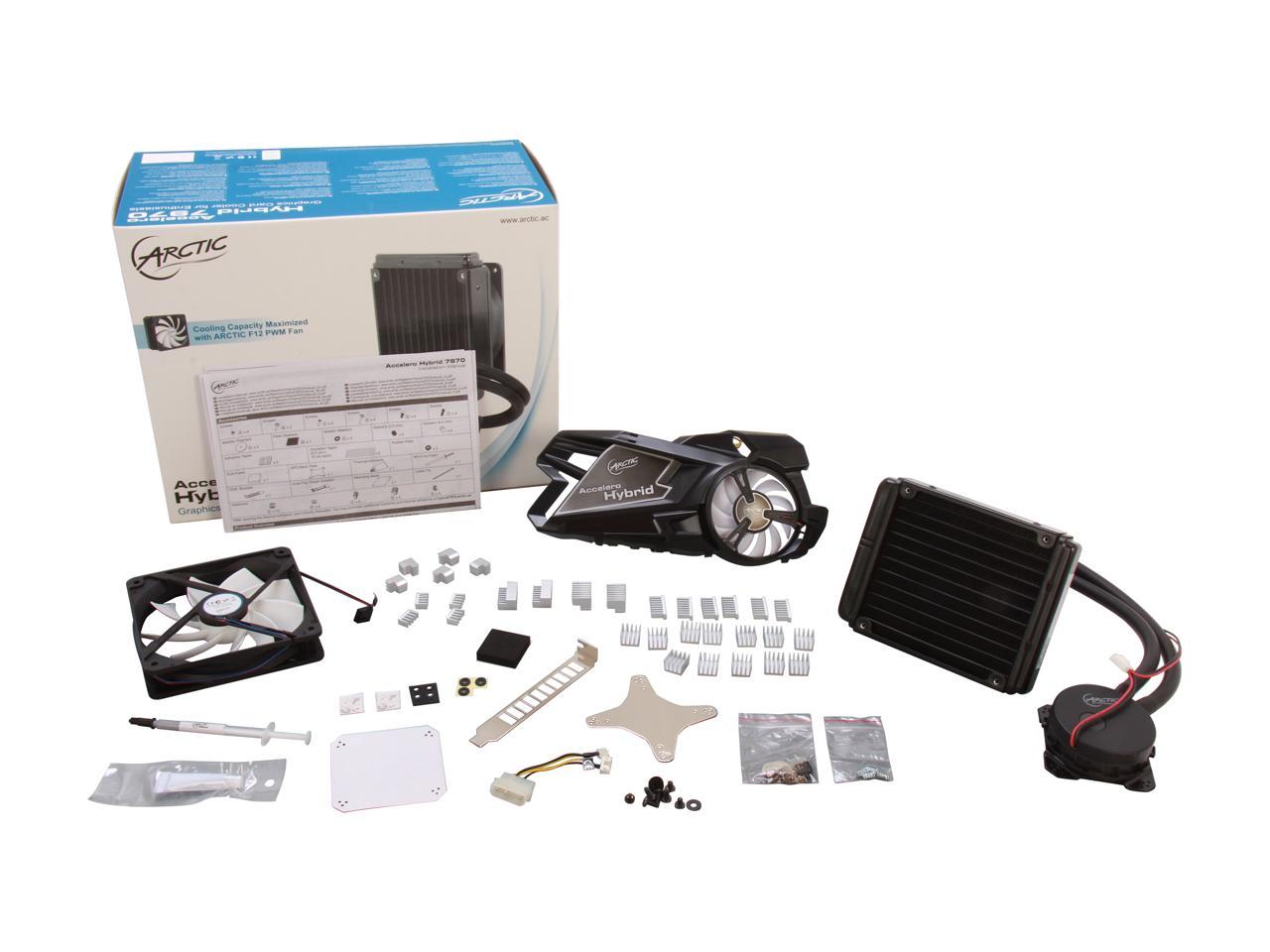 
The Accelero Hybrid 7970 is an air and liquid combined solution for the world's first 28nm GPUs, especially compatible with AMD 7900/7800 series. It is compatible to a vast range of AMD graphics cards, different from the traditional VGA Liquid Cooling Solutions (LCS). Its quiet operation and superior cooling performance on graphics card are loved by computer enthusiasts or gamers.

Cons: PRICE, AMD Version is $50 more, why?, because of the shape of the waterblock (the raised surface).

Overall Review: Just buy the cheaper Version, a $4 copper shim and a SwifTeck Full Cover heatsink. Use the Water Loop and throw the Artic Shroud and heatsinks in a box.

Cons: Does not have cooling (airflow) on the #1 VRM, temperatures shot up to 90-100C before I pulled the plug. 7900 cards have VRM #1 near the crossfire port and VRM #2 near the power connectors. The 7970 arctic cooler does not blow air over the #1 VRM at all, even though they tell you to put a heatsink on it. If you are going to pay $160 for a cooler, it better sure as hell cool the ENTIRE card. This may be ok for medium gaming, but high VRM temps can heat up other components and wear down the life of the card (although they can handle up to 120C). You cannot overclock with this cooler and keep the card safe. It is a design flaw in the product, because the previous version (non-7970 arctic hybrid) did not have to take this into consideration. This version of the cooler is pretty much identical to its predecessor. 7900 cards VRMs run a lot hotter also because of the greater electricity requirement, but Accelero did not take this into consideration. I took an 80mm fan and placed it blowing over VRM #1 position and cooled it by nearly 7C, something they should have considered in the design. The install can be difficult (although I've done 5 at this point) for the new guy.

Overall Review: If you are only concerned about GPU temperatures and not the rest of the PCB, this cooler will keep your GPU @ 60-70C max full load. However, the 7900 cards VRMs heat up a TON and should not be ignored. These can be checked in GPU-Z.

Pros: The fan cools the ram and VR The liquid cooler which is optimized for the graphics board 7970

Cons: The mounting kit is not coustomer friendly. Complicated installation

Overall Review: This cooler did a Brilliant job. I do a lot of research to choose a cooling fan to replace the stock cooler come with sapphire AMD HD 7970. Finally, I order this one. I am not sure how does it work. But I just am curious the water block with a cooling fan. Its instruction is clear. However, it take me around 6 hours to mount it on my board. Regardless of the installation issue i still give this card 5 stars especially. As for temps this cooler went far beyond my expectations. My idle temps didn’t not change much since they were already low (35-40C) on stock, I am getting about 32-35*C on this cooler. My old cooler would also get some high temps of 70-80*C now that I have this cooler my temps have not succeeded 60C i usually sit around 50-55C with my gpu at full load. This is an incredible difference. As for noise levels this card is no disappointment, While the fans are at 85%, you cannot hear much noise at all from the cooler. I’m sure most of you have coolers that make a high pitched annoying sound once the RPM go up but not this one. I would highly recommend this cooler to anybody looking to improve idle and load temps on their GPU and eliminate almost all of the noise coming from the card.

Pros: cools the GPU greatly keeps it at 52 under full load was 75 before over clocked the card i had was a 7970 from Sapphire

Cons: hard to install takes a good hour if not more..... spliced the cooler into the radiator i already had installed in my computer (voids warranty) but all is good now

Cons: None for me, the install wasn't as hard, like some people said it would be. The price is a little high but the gratification of no sound and cooling is we worth it.

Overall Review: The install probably took me about 1 hour 45 mins, wasn't complicated just took a hour for glue to dry. It's all there I didn't need any of those micro washers but still doesn't seem tough. If your at all handy this is cake. Works great minimal sound, cools like a champ

Pros: its not too bad to install just take it step by step...before idle aprox 50c and load was like 85c with jet fan going at like 75%..now idle low 30s and i ran 3dmark vantage didnt go past 46c....vram temps seem the same like 35 idle 65 load ..the instructions say put all the thermal paste on the gpu i didnt but even using just half still seems like alot of paste...i kinda wish i just painted on a thin layer like i usually do and i think prob temps be a lil bit better...also since was not room to do push pull fan system inside my case i mounted the pull fan outside the back of the case...

Pros: I've had mine for just over a month, installed on a Gigabyte GV-R797TO-3GD Gigahertz edition. I run bfgminer when I'm not gaming, so the 7970 runs pretty much 24x7 at 1250MHz, 100% utilization (approx 720 Mhash/s). I went from a sustained 72C@1150MHz on the stock cooler (3 fan style) to 62C@1250MHz (75F ambient). The fan is perfectly positioned to cool the VRM on my Gigabyte and push the air out the rear of the case, which is significantly superior to the stock cooler arrangement which just circulated the extremely hot exhaust from the VRM. The little cardboard cutout that helps keep the secondary heatsinks from blocking the primary heatsink/pump is really great - without that, I probably would have blown the installation. The fan on the card is dead quiet at 100% (which is fortunate, see Cons) and the fan on the radiator is also virtually silent.

Cons: The installation is a beast, and not for the faint of heart. If you've never installed a custom heatsink before, I do not recommend getting this - it's possible to mess up the installation and ruin your 7970. Also if your card is not a reference implementation, as my Gigabyte was not, be prepared for some customizations by hand. For example, my Gigabyte had a 3-pin fan header instead of a 4-pin, which meant that I had strip a connector from one of the old fans, remove the 4-pin header, and wire the 3-pin so it at least got power to the fan. Unfortunately, doing so means that the fan runs at 100% all the time and cannot be controlled by software. For $150, it'd be nice for ARCTIC to deal with both 3-pin and 4-pin fan controls. Given the difficulty of the installation, it would be good to include some extra screws, particularly the ones that secure the heatsink/pump to the backplate - they are cheap, small, and easily stripped given how secure they need to be. Also, an extra set or two of the two-sided sticky washers would be very helpful, since they are so hard to use. It's very easy to fail to properly secure the heatsink/pump unit to the backplate. The spacers are plastic and not very strong, and mine moved around because I was largely unsuccessful in getting the two-sided sticky washers off their backings and applied to the spacers. I was very hesitant initially about applying significant pressure to the backplate screws, which turned out to be a problem; about two weeks after I had installed the cooler, I had to re-install it because the heatsink/pump unit worked itself loose and broke the seal against the GPU die. I used Arctic Silver on the GPU die, so I don't know how good their thermal paste was. When I first installed it, the pump made a soft burbling ticking noise like a fish tank aerator pump. After a couple of weeks, that mostly went away, so I presume it was air bubbles inside the closed loop that eventually settled. I put my radiator in the top rear of my case with the fan pushing out to the rear. This configuration is decent, but if your case is negative pressure, the stock radiator fan is not powerful enough to keep pushing air through at the same rate, which reduces the effectiveness of the cooler. A second ("puller") fan helped with this. The radiator MUST stay clean. I was running an open case while testing, and some dust eventually built up on the inside of the radiator. This eventually caused the card to heat up to 72C@1250MHz, and bfgminer to throttle back to avoid overheating. Cleaning the radiator restored the card to 62C@1250MHz. Between this and the pusher/puller fan experience, it's clear that the amount of air moving through the radiator is absolutely critical to the effectiveness of the cooler. Finally, the weight of the heatsink/pump unit causes the card to sag. My Gigabyte had a metal stiffener, which I had initially removed but had to go back on.

Overall Review: So not cheap and hard to install, but very effective when properly configured. A little extra help with the install and a few spare parts would go a long way to making the cooler a much better purchase.

Cons: *Very time consuming to set up and install *Didn't notice massive temp drops after installation (<5 deg C) *Over time, the card temperature increased more and more...eventually the card failed and had to replace

Overall Review: Good idea, but for such complexity it's probably much more effective just to water cool