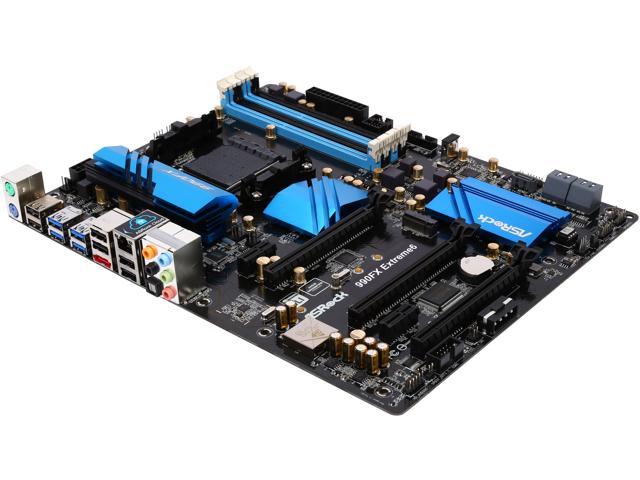 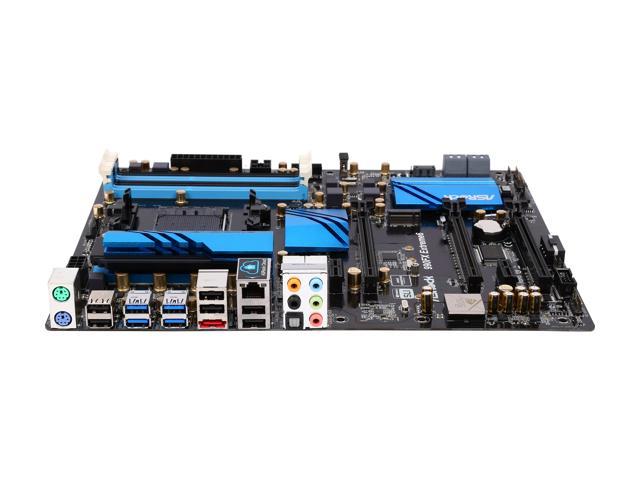 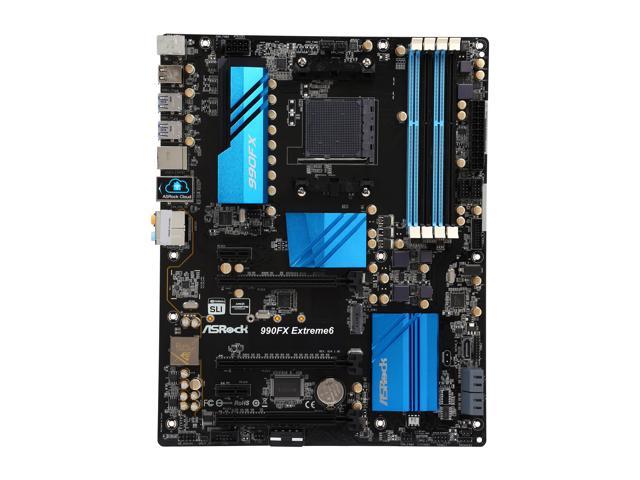 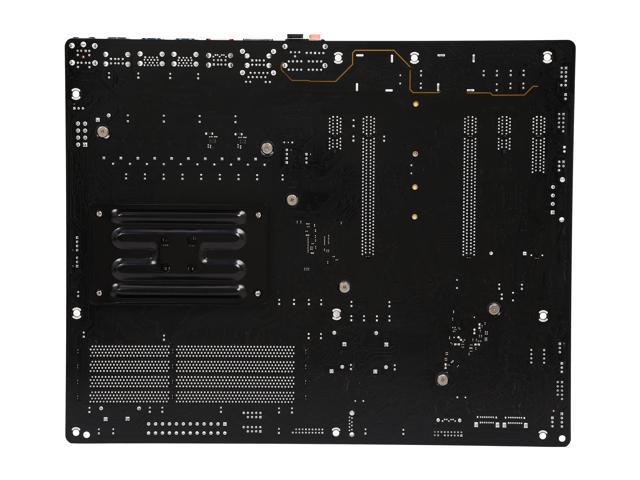 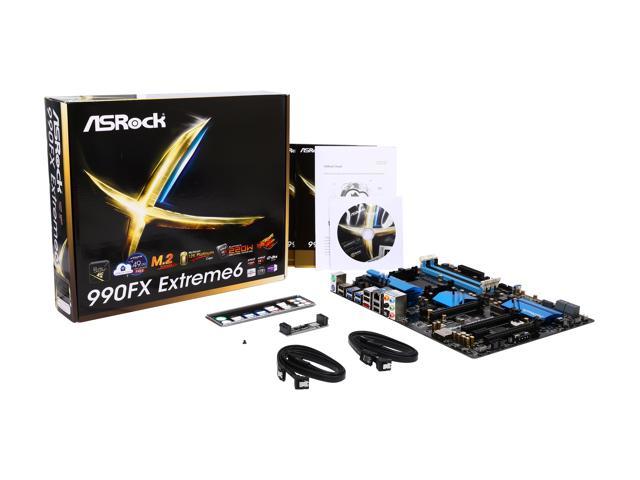 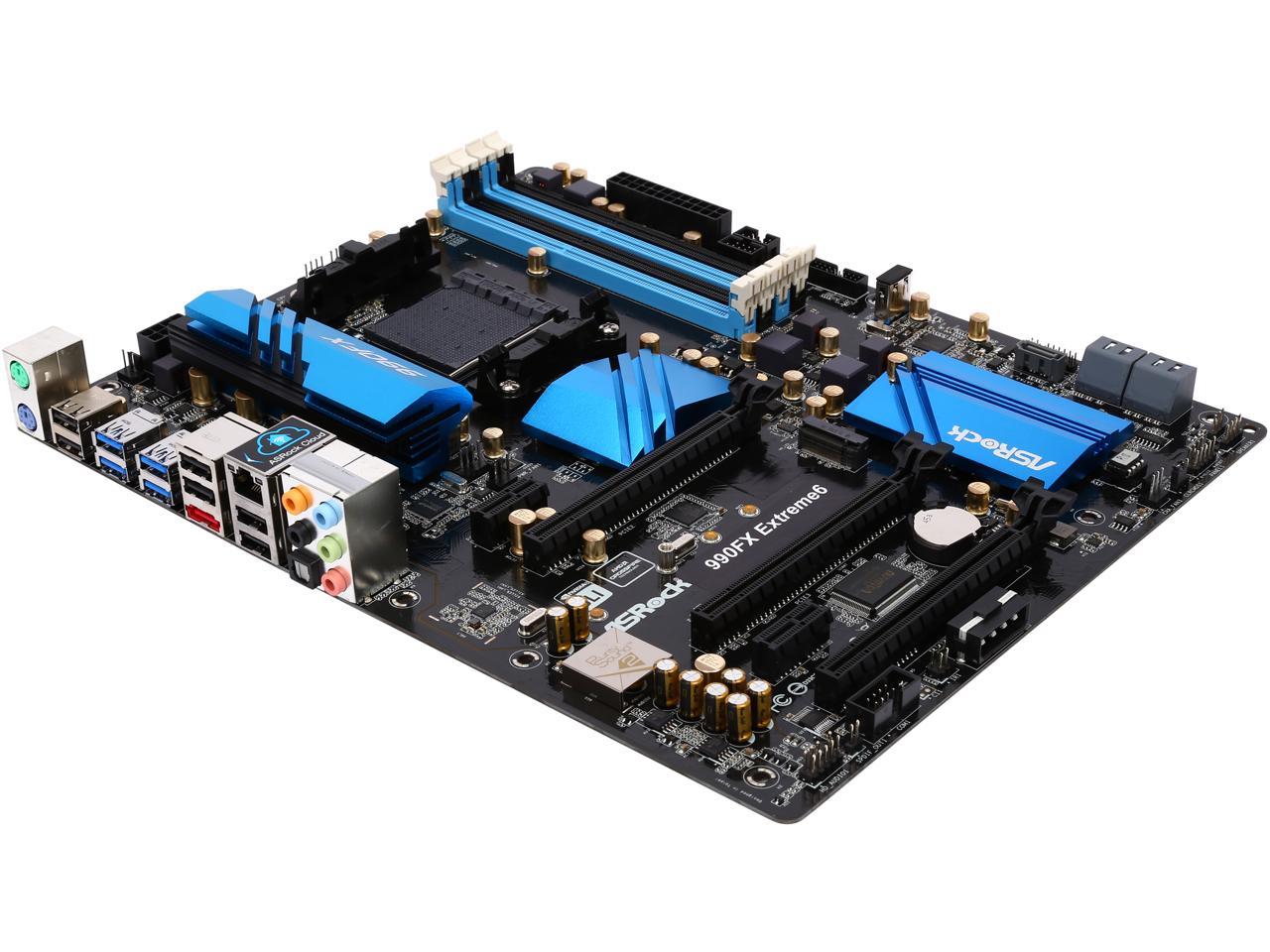 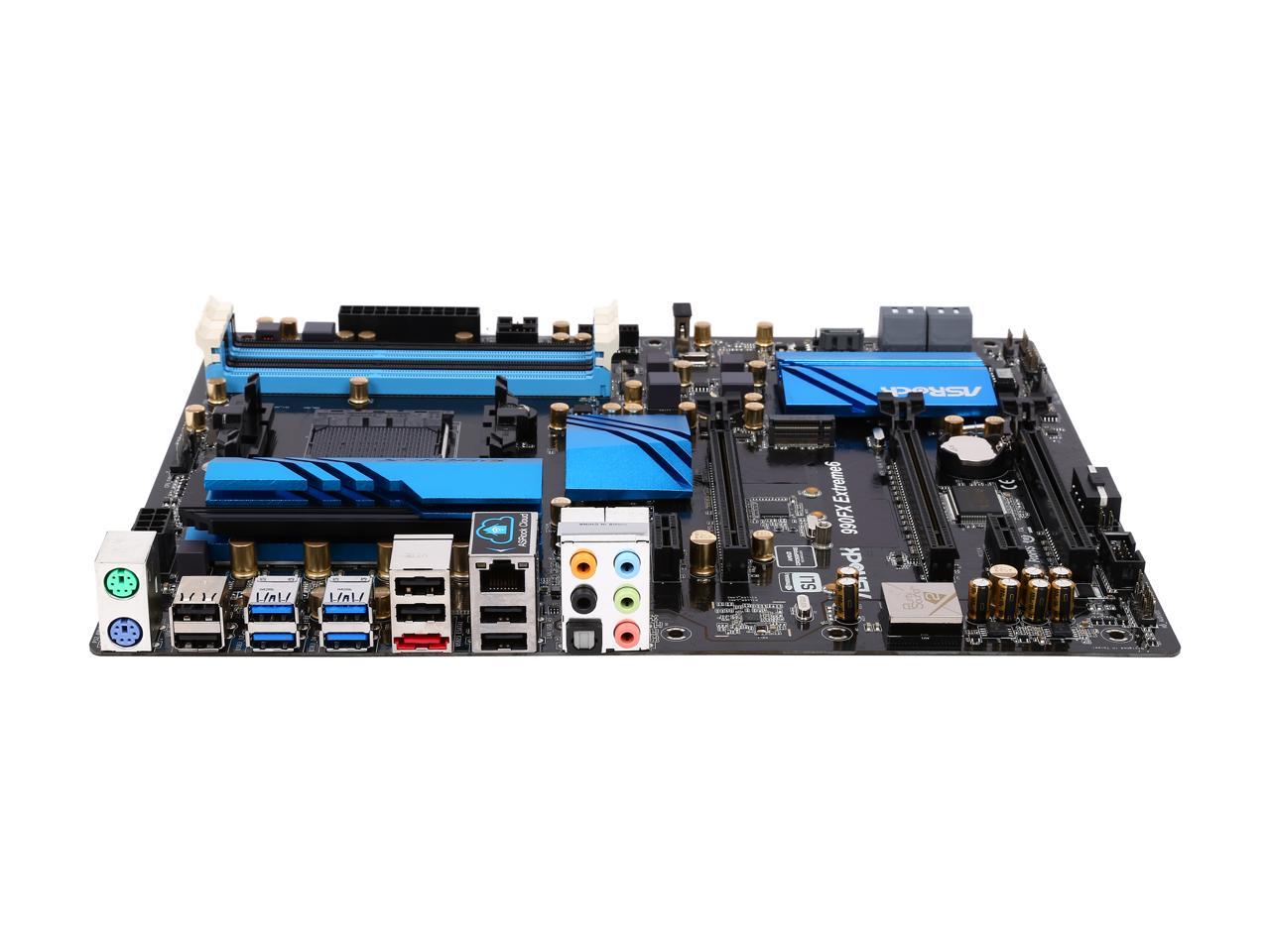 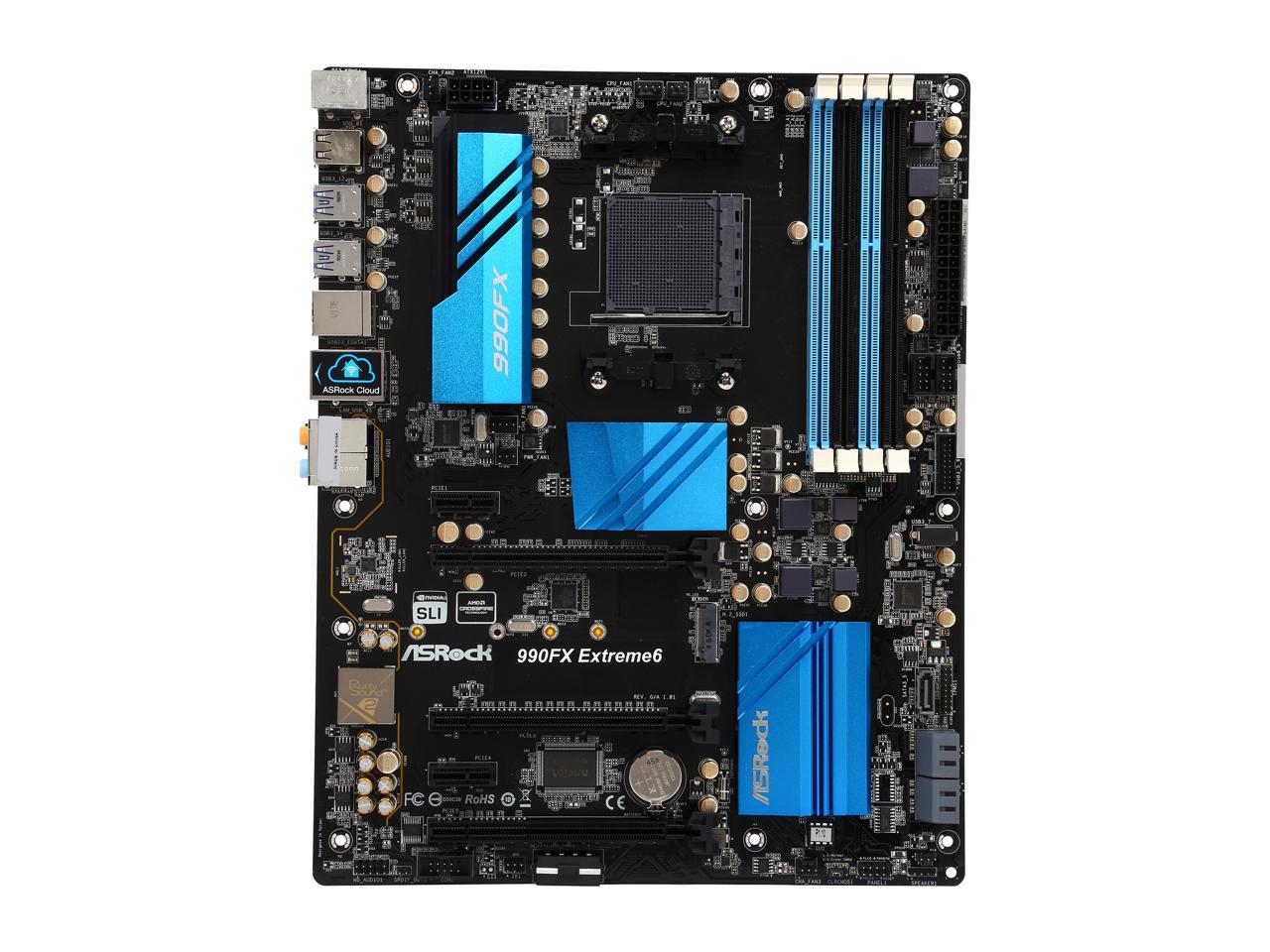 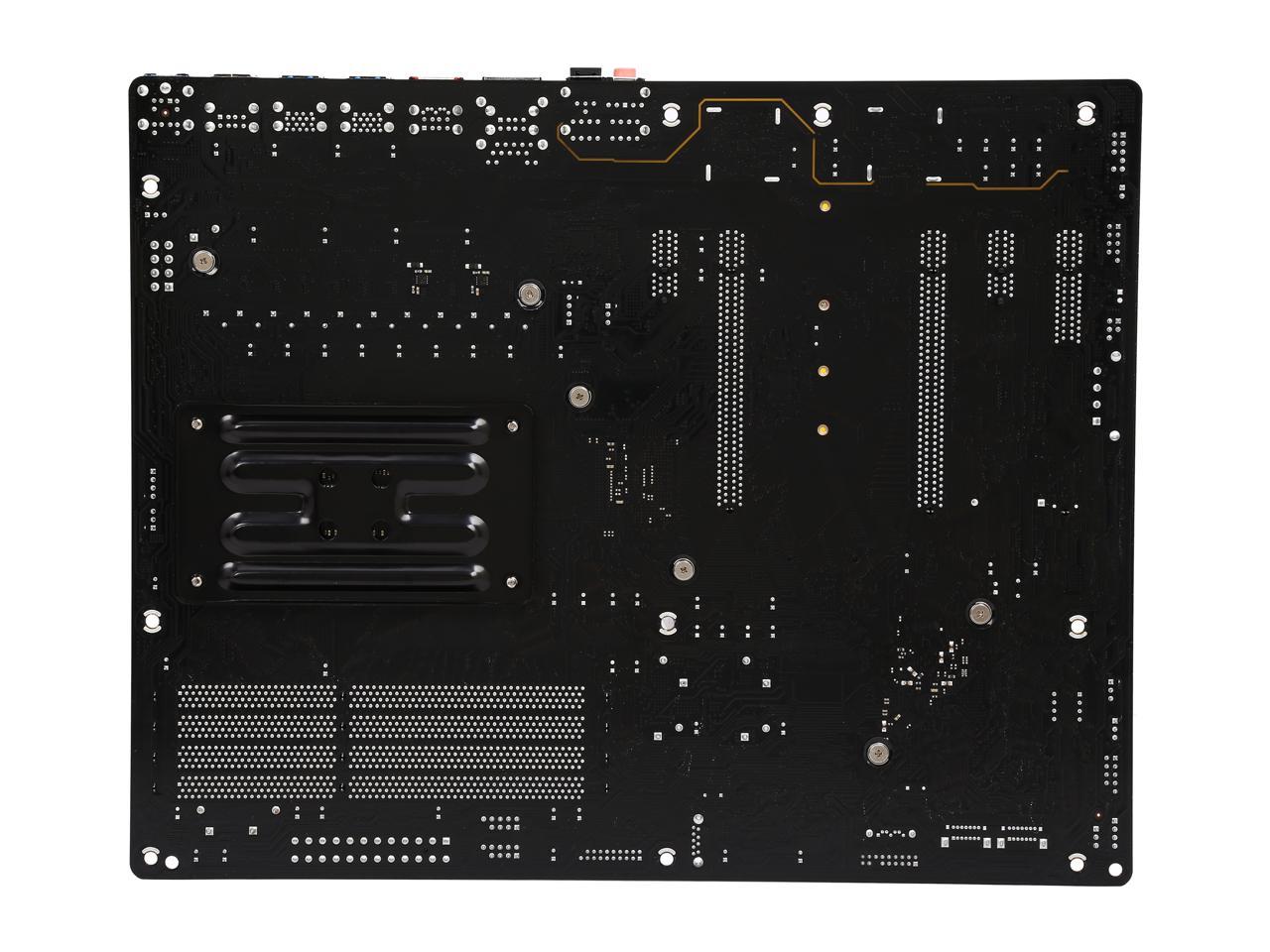 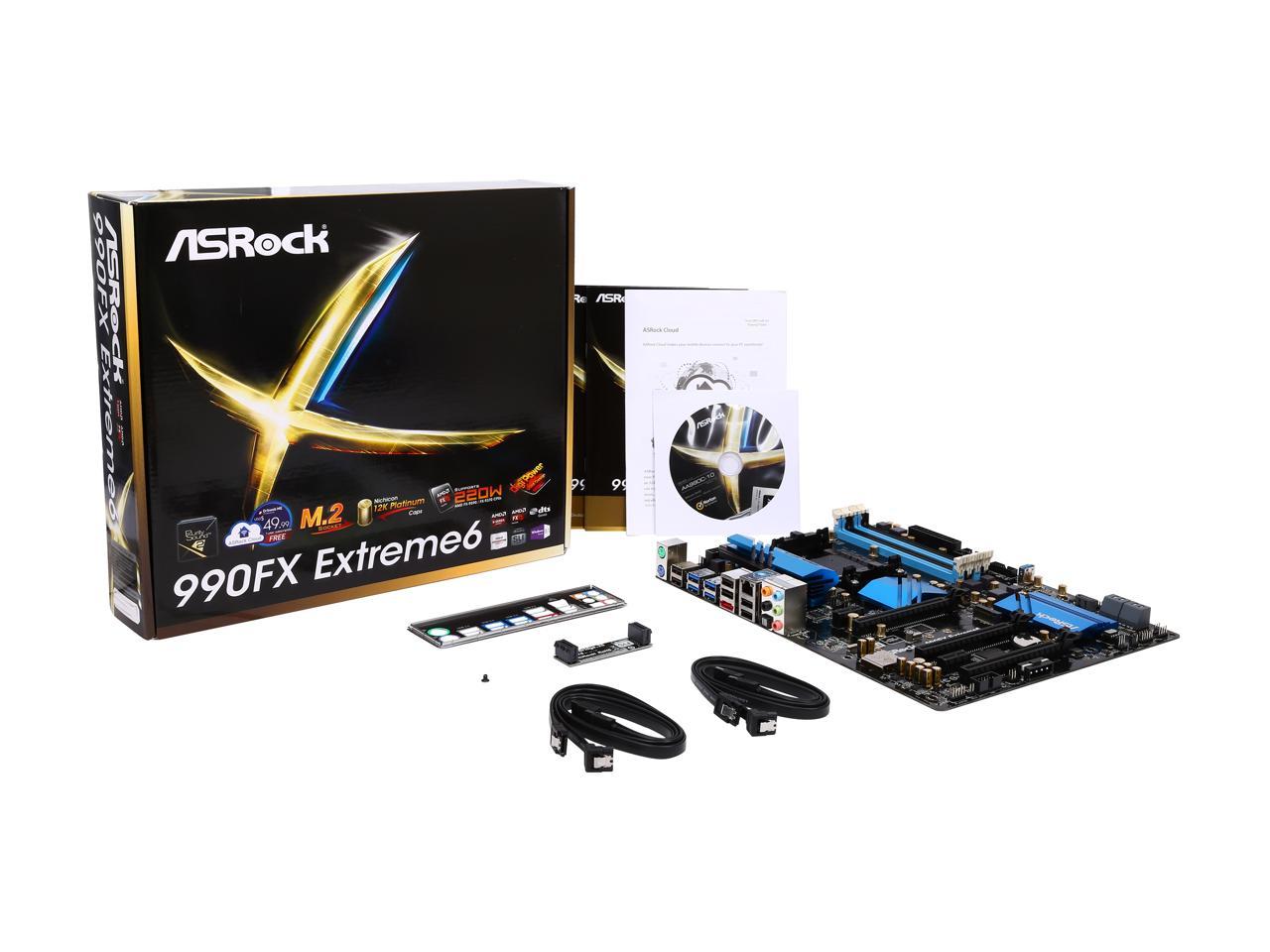 With its performance, features, and quality, the ASRock 990FX Extreme6 is a great motherboard for you to build an AM3+/AM3 processor-based system. It's armed with an AMD 990FX chip and 8 + 2 Power Phase with Digi Power, capable of accommodating up to an eight-core CPU with up to 220W TDP (AMD FX 9590 and 9370). The newly introduced M.2 socket offers you the option to integrate the ultra-compact Next Generation Form Factor (NGFF) SSD. The Full Spike Protection safeguards sensitive components against surges, lightning, and ESD. Enjoy better, audiophile-class sound with the Purity Sound 2 solution. Build a gaming monster with three PCIe 2.0 x16 slots with AMD 3-Way CrossFireX/NVIDIA Quad SLI support. The acclaimed ASRock XFast RAM and XFast LAN are also included for a fast, smooth experience in both local operations and on the Internet.

Cons: - It suffers the same limitations as most (if not all) AMD motherboards.

Overall Review: It seems some people are complaining in their reviews about the board's features, when those features are listed clearly in detail on the product page. It's your fault if you choose to be ignorant and don't do your research. M.2: Yes, this board has an M.2 slot. No, you don't need an M.2 slot to use an M.2 drive. Go get a M.2-to-PCIE adapter, plug it in to a PCIE slot. This will let you get faster speeds than you would with the M.2 slot that is on the motherboard. RAM: Many AMD motherboards (this one included) are listed as supporting 64gb max memory but have 4 slots of DDR3. At the moment there are no DDR3 DIMMs that come in 16 gb (as far as consumer-grade stuff goes), only up to 8 gb. So unless the board has more than 4 slots you're still at 32 gb max.

Pros: So i have been running this board all day every day for around 10 months straight and no issues at all. It over clocks fine and have a decently workable UEFI bios. I just bought a FX 9590 and will update how well it handles it after it arrives. I got to use the M.2 drive for a little while but it was only a Sata 3 and not a x2 so it dose work but I cannot tell you how well it could if you bought a better m.2 drive.

Cons: One of the X's on the Heart spreader was just slightly peeled up on a corner and cut me one good, but what the fun of building a computer if it doesn't draw blood?

Overall Review: Guys this is just the Killer 990FX board, and you can prove it by peeling off the black electric tape over the killer name just under the PCIE slot. But it is made with slightly better parts and it comes in blue if you need a build theme done. Also the killer Ethernet Nic on the board does go up to 11! (1-Gigabit speeds). Sound off board was pretty nice as well and lots of I/O on the back and USB 3.0 support. Sadly i had some trouble with getting my 1866 ram speeds locked in some times, but that could be my CPU (FX 8150).

Pros: One of the very few 990FX chipset motherboards with an M.2 slot. Not a huge performance increase because of limited bandwidth, but exceeded the typical SATA 3 channel on the motherboard. Works well with a AMD 8350

Cons: Not stable with the AMD FX 9590. Could have been heat related, but I am running with liquid cooling. When I downgraded to 8350, performance was so much more reliable with a relatively small hit. Old and tired 990FX chipset needs a real refresh. Looking forward to Zen and supported motherboards in the next 6 months to a year.

Overall Review: Recommend this to others with a limited budget and want to try out M.2 SSD in a non-Intel motherboard.

Pros: Not really much to say here, works perfectly as it should. Won't run hot if you have ample cooling for it.

Cons: Once in awhile when booting into the BIOS for some reason it does not recognize the mouse or keyboard (Mine light up and when it fails to recognize them they do not light up), never been able to figure out why. Upon resetting though it fixes itself, so it's not a huge deal to me anyway. Just thought I'd put it here.

Overall Review: There is mysterious tape or something covering what appears to be the word "Killer" on the keyboard down near the PCI slots. I know Asrock makes a keyboard with that name. Just seemed weird to see this.

Cons: fan plugs need 2 be all 4pin.. though the FSB & DDR3 speeds are mentioned in the UEFI.. AsRock doesn't explain this very good... would like 2 see NB & SB fans with heat sinks..

Overall Review: it's ok.. better than the MB's in OTC generics..

Pros: Nice board,Worked right of the box.Nice sli setup on it.Most everthing is placed well on board.It's a ASRock board works great!!

Cons: U need a molex plug if ur going to use the third sli.Bad place on facing down.If u want to use it, ur going need a full tower or mod ur case.Power supply blocks plug.Needs more usb headers.No llc in bios if ur going to o/c ur cpu

Overall Review: Very nice mid range board.Supports 220watt AMD cpu.Overclocking is mid-lvl with board.Have to use off-set voltage because of no llc to keep voltage stable.Board only been out a little while now maybe the next bios update they will put it in.But i happy with the board

Pros: -220W AM3+ support -M.2 V2 support -DDR3 2450 OC support -2 PCIe x16 and 1 PCIe x4 -Solid BIOS -Excellent layout Bought this board for my brothers second PC build, couldn't be happier! Case he purchased had a USB 3.0 port on the front panel with a standard USB B internal connector which I thought we would have to run out the back to the IO ports, NOPE; this board has an internal USB B connector by the SATA ports (as well as the header for the internal USB 3 connector). Overclocking the CPU was a breeze; I was able to get the CPU to 4.6 Ghz on an Corsair H60 AIO and will allow him to test stability (was able to push it to 5.2 Ghz without breaching 45c in BIOS, but want to allow the cooler paste to work in). Ram was the only thing that was annoying to configure; board has alternating Dimm slots (by color) but of course the PCB is labeled A1/A2/B1/B2 and thanks to some foolish engineer the A1 and B1 slots are on the same channel. Once that was clear I was able to easily overclock the slots to the appropriate 2400 rating for the selected ram. M.2 SSDs are a bit pricy at the moment, but the fact the port is included for future upgrade is quite awesome! Only wish it came in micro-ATX/mini-ITX format :(

Cons: -RAM slot layout (not really a con, just annoying that it they are in the order they are)

Overall Review: Once M.2 PCIe SSDs become more reasonably priced, this board is going to probably be the best AMD-based board on the market IMO.

Cons: none, keep up the good work.