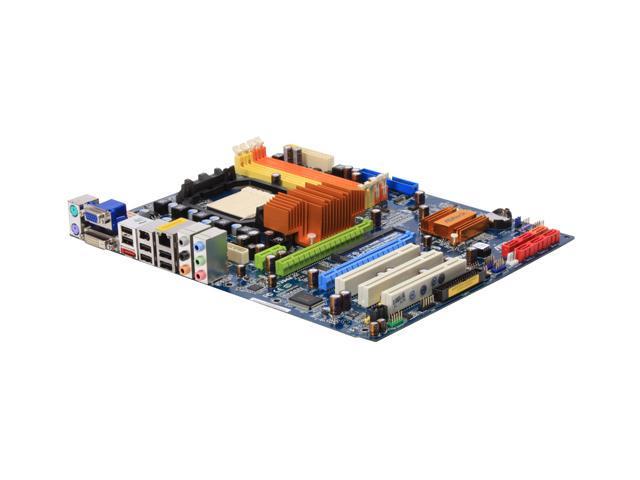 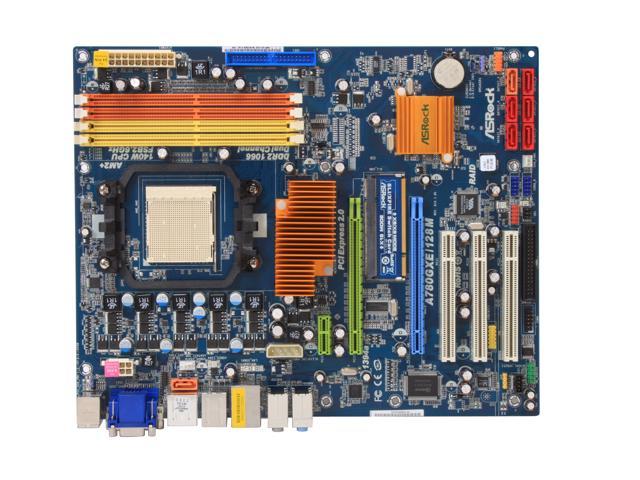 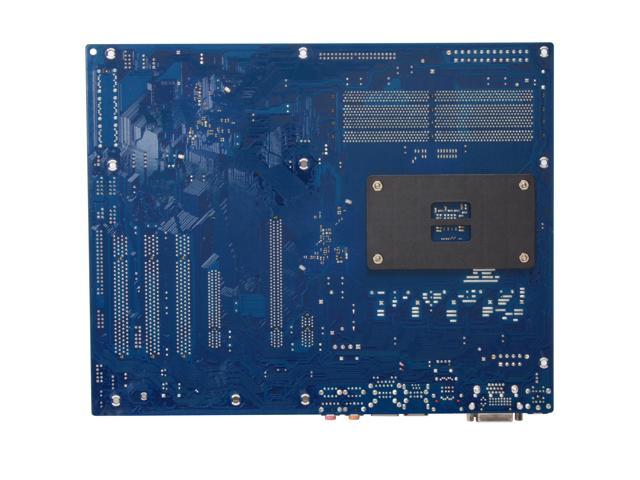 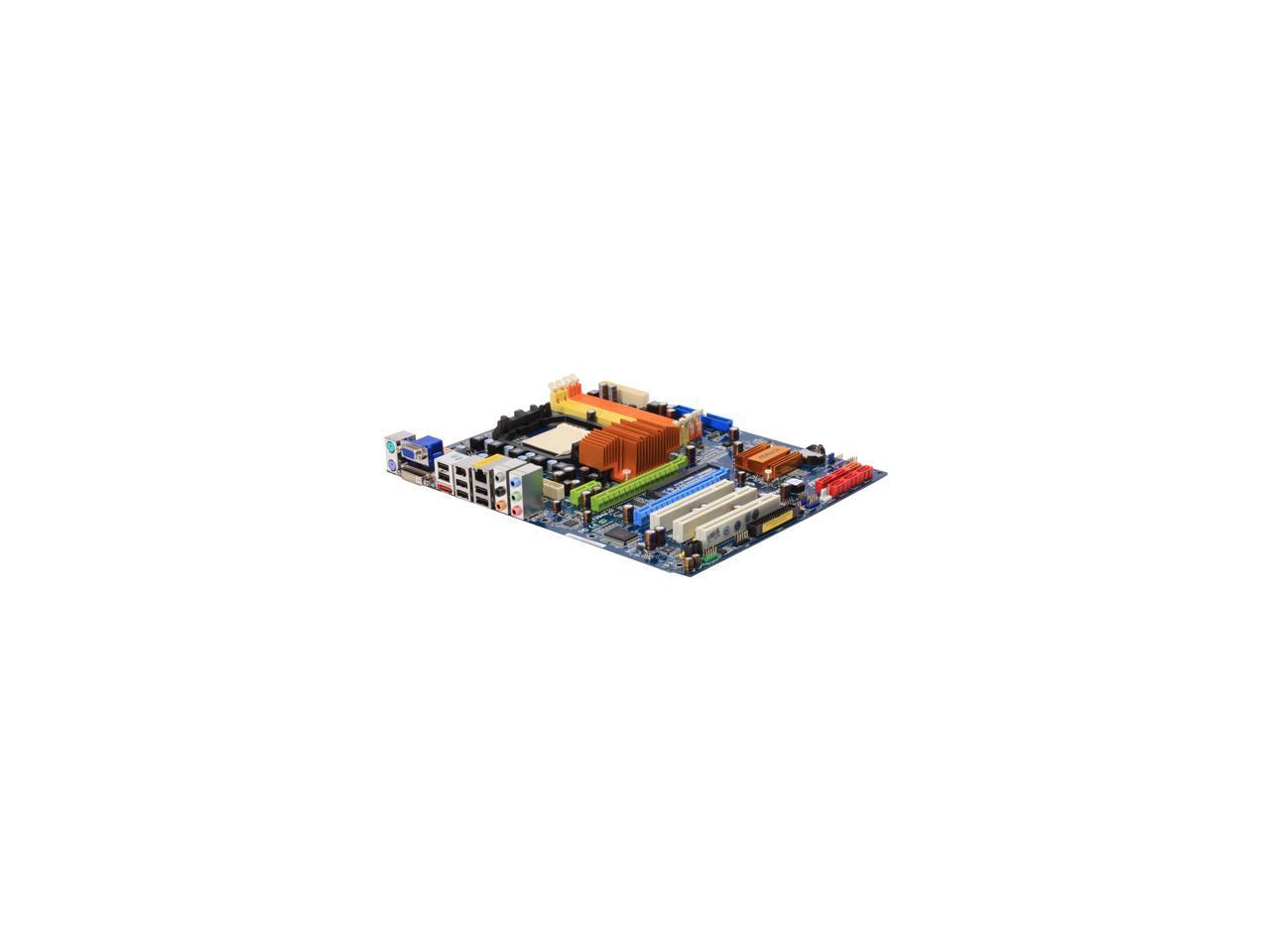 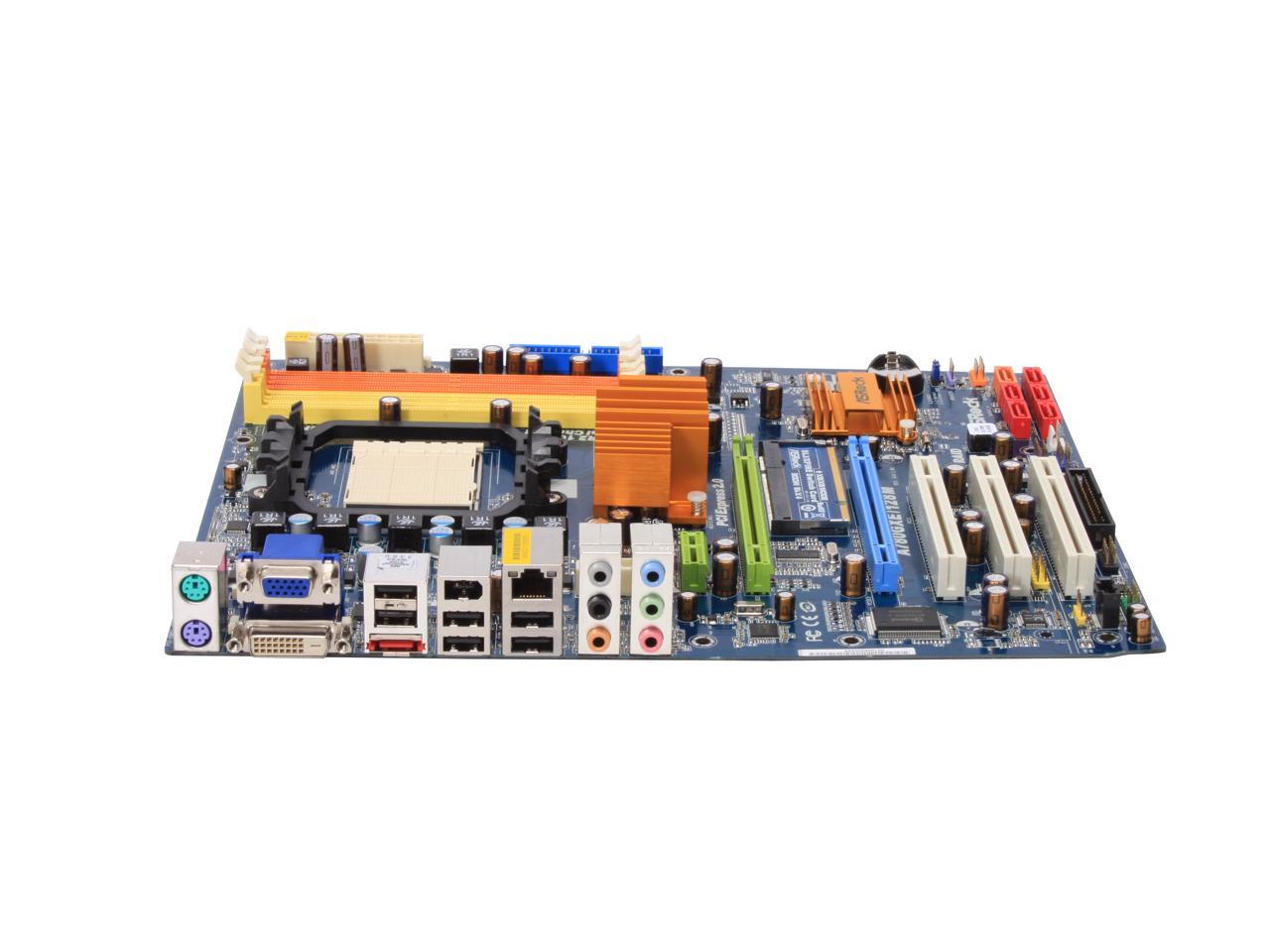 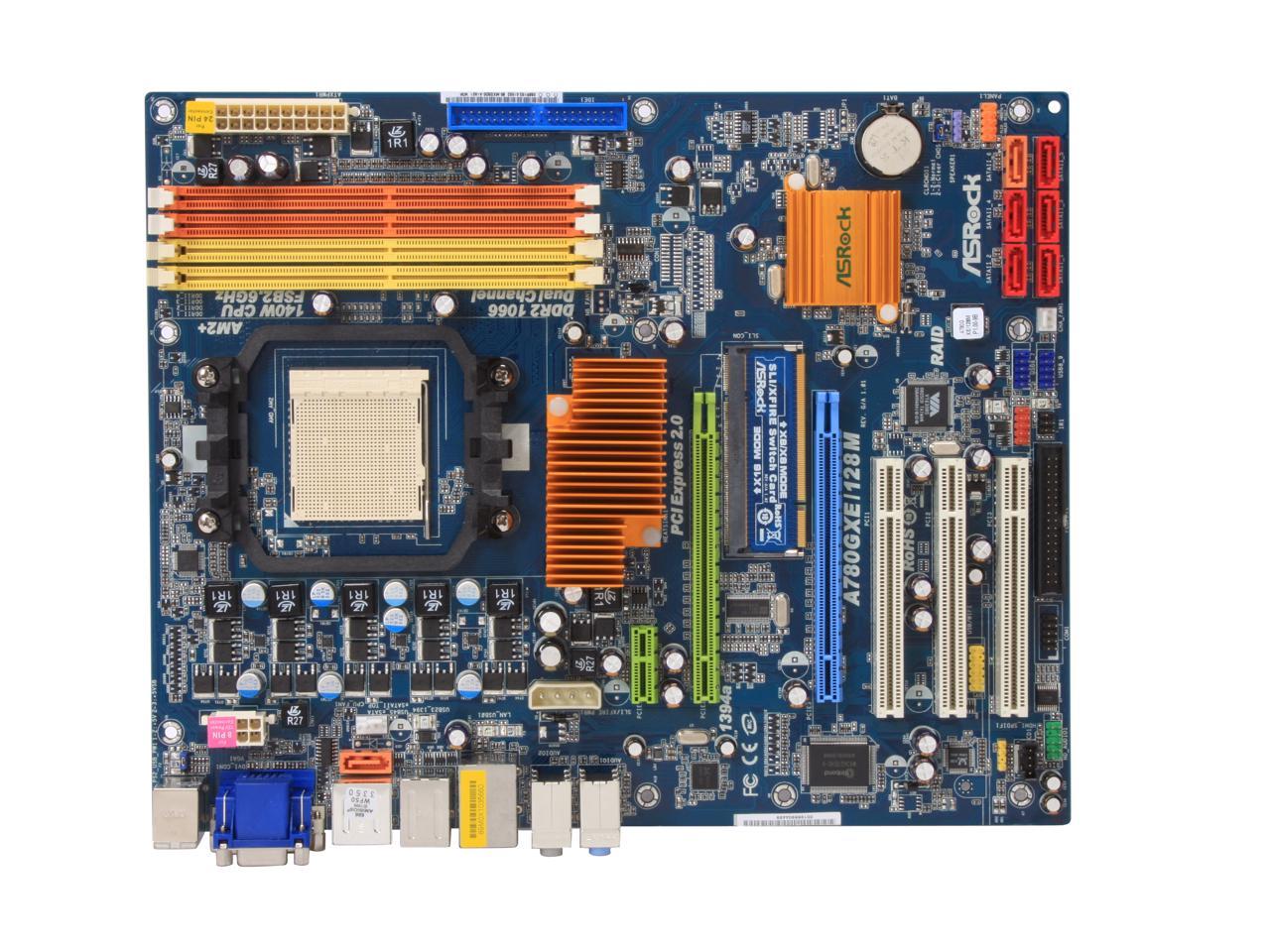 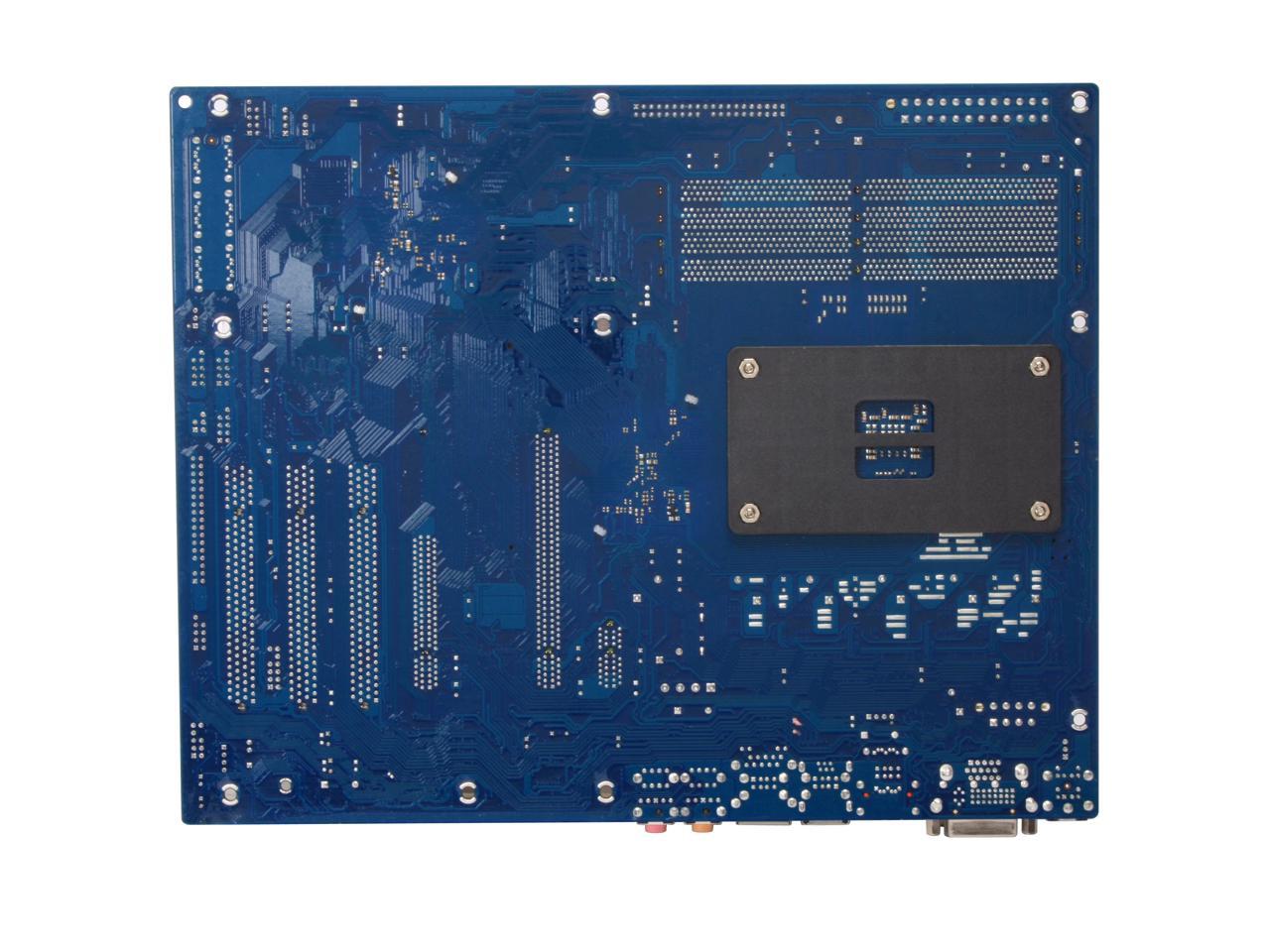 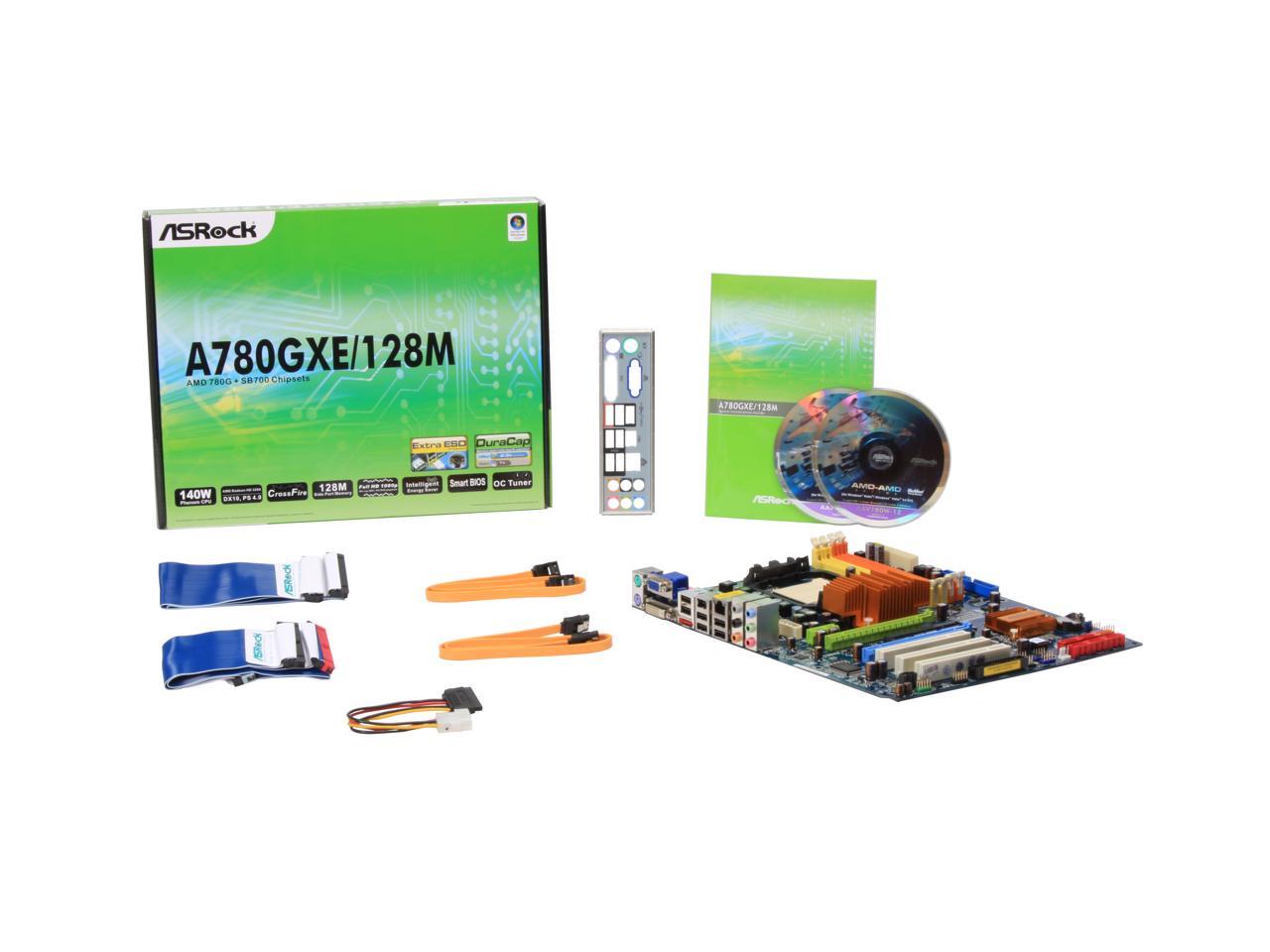 (336) Write a Review
OUT OF STOCK.
Overview
Specs
Reviews
Get the power you crave with ASRock's A780GXE ATX motherboard. Ready to support the latest AMD AM2 and AM2+ socket multi-core Phenom processors up to 140W, it features onboard AMD 780G and SB700 chipsets and utilizes Hyper-Transport 3.0 technology to increase data flow. Its ASRock DuraCap feature more than doubles the life expectancy of the board and you won't have to worry about obsolescence as it's AM3 CPU-ready. Pack in the power with 16GB of Dual Channel DDR2 1066 memory.
The integrated AMD Radeon HD3200 graphics supports DirectX 10 and Pixel Shader 4.0 and the graphic capabilities can be expanded with two PCI Express 2.0 x16 cards using ATI CrossFire or Hybrid CrossFireX. The Realtek ALC888 audio chipset delivers 8 channels of HD audio through six audio ports. Connect up to six SATA devices at 3Gb/s for high-speed data transfers as well as the option for multiple RAID configurations.
The external SATA connection allows the same throughput for external devices. Integrated Gigabit Ethernet LAN allows bottleneck-free connections to other network devices at broadband speeds and a half-dozen USB 2.0 ports along with a FireWire connection allow for nearly unlimited possibilities in connecting peripheral devices.

Learn more about the ASRock A780GXE/128M

Pros: Much faster booting than my previous board, good BIOS features, great on-board video chipset (though I am using a dedicated video card anyways).

Cons: External eSATA connector requires you to run an extra SATA cable across the motherboard to an internal SATA connector next to the eSATA port on back. Not too much of an issue for me since I don't use eSATA yet, but could be really annoying if you use a lot of SATA ports, as hooking this up requires using 1 of the 6 SATA connectors on the motherboard (see pictures of board to see what I mean). Also, using RAID adds 5-10 seconds to the boot time because it scans the disks every time. Not sure if that's normal since this is my first RAID setup, but it's a little annoying.

Overall Review: I was unsure about this board at first because ASRock is a relatively new brand for me, but so far the board is great. 1066Mhz DDR2 runs at 800Mhz because I'm an idiot and paired it with an Athlon X2 (max. 800Mhz DDR2 support) instead of an Phenom with full 1066Mhz DDR2 support. Not the board's fault at all, but just thought I'd share in case others are about to do the same thing (This board WILL support 1066Mhz ram with a processor that supports it).

Pros: Very complete board. Runs Linux well (Alsa 1.0.19 supports the sound; be sure to select AHCI for SATA or disk performance suffers). For this price, this board has everything you could want. Keys for me were the 3 PCI + 6 SATA and 4 memory slots. LOTS of OC options and handles overclocking beautifully. Nice build quality.

Cons: I'm a hardware developer and this board (along with most others) don't have LPT port anymore. The com port is on the MB but no backplate is provided. Solution: Get a cheap moschip 2 serial + 1 lpt PCI board. Board is big -- put the drives all in while the board is out! Chipset heat sink is in the way of my giant cooler's locking knob. Solution: take out the power supply and put the latch on the other side then reinstall power supply. BIOS interface took a little getting used to, but probably just because I'm used to different. The CPU speed math was off on Bios 1.3 but fixed in 1.4. No retention clip on PCIe slots. USB keyboard through a KVM switch will not initialize during POST which means I needed a PS/2 keyboard to do setup. Worked fine on the old mobo, and works ok once Linux boots. However, its the KVM -- plugging the keyboard straight into a hub works. Still should work and does on other BIOS's. None of these are major problems.

Overall Review: Good board. Will probably buy some more after I replace the 5600+ X2 with a Phenom II 3GHz x4! ;-) I suppose I could have put the CPU on outside the case instead to save pulling the power supply, but I hate to bump the huge heat sink once its on. Not using the onboard video, but it seems OK. I use NVidia and the onboard video won't help my card out, and appears to be anemic compared to my NVidia card. Not interest in SLI/XFire anyway, but note that XFire cuts the PCIe to 8x.

Pros: 780 AMD Chipset is better than anything NVidia has at this time. Layout is good for cable routing. External SATA is kind of useless when you think about it. Overclocking utility is easy to use. Windows based BIOS updater. Phenom 9950, 4 Gigs OZC 1066, OCZ 750 PSU, 3 X WD 500 Gig Sata HD, 2 x SATA DVD Writers, 2 x IDE DVD Writers and a EVGA 9600 GT video card.

Overall Review: Asrock manual states that when using DDR2 1066 Memory to place the modules in the orange slots. All this will get you if you are using two modules is a no boot situation. If you only install one module if 1066 in the orange slots the board will boot but the memory will be seen as DDR2 800. If you install both modules in the yellow slots the board will boot and recognize the RAM as 1066.

Pros: setup was easy. installed a pair of corsair ram (4GB) and a pair of patriot ram (4GB) and the board recognized all 4 modules without any problems. northbridge stays cool with stock heatsink. 6 sata ports, decent onboard video, 2 PCIE16 slots (8x, 8x).

Cons: pcie 1x slot is practically useless because it's located right next to the northbridge heatsink. my Intel gigabit pcie adapter won't fit. Installing it on the second pcie16 slot won't work either. Also the chasis fan header is located at the bottom of the board, making it really difficult to use because I have a full tower case.

Pros: Low cost, quality, and features like Quick Boot and the OCing control panel make this a board well worth the little money it sells for. Plenty of on board stuff, SATA, fire wire and all sorts of USB's. HD sound, two PCIe2.0 slots, crossfire, pretty good on board graphics, supports all sorts of CPU's and 16G of 1066 memory with 64bit and quad of course. It even has a header for WiFi!

Cons: No led to show PSU is working?

Overall Review: I should add that this board is running at or below 27c while working under normal load. A bigger video card running crossfire with the onboard is a nice feature.

Pros: Full ATX, Easy setup, Easy BIOS, Good Company. This board will also allow to to use a 2 slot video card w/o blocking a PCI slot, like so many others do. This is a very good board.

Cons: I've had this board for two weeks and have no "cons" to speak of.

Overall Review: I've read a few reviews that helped me out and opened my eyes on some issues. I want to share a few things I ran into because it may help some out there like I was helped. I have built machines since the 486. I know what I'm doing. My last build was a speedster, and lasted me three years. So I've been out of the build business for that long. Let me warn those of you who were like me and are building a machine for the first time in a long time. No longer can you pick a form factor (AM2), and drop in a CPU that fits. You MUST now go to the board web site and see what CPU's it accepts. Thank goodness someone mentioned it off hand, and I looked in to it. Save yourself a RMA and look it up! Second issue was the power supply. I looked on the board and the socket was larger than what the power supply offered. I got upset but then realized you had to pair that plug together with a 4 pin plug to make the larger plug. My bad, but I hadn't seen that before. Things change!

Pros: Great board to work with. I've installed many motherboards over the years and the memory and PCI cards popped in smoother and easier than any board I've worked with previously. More SATA spots on the motherboard than I could possibly think of using right now including one on the Rear Panel (but it will use one of the 6 on the board) Has 3 PCI slots, which is great for me. Can run duel monitors with the VGA and DVI connectors. Has 2 onboard USB connectors, but the Wi-Fi doubles as a 3rd if your not using with a Wi-Fi adapter (which this board does not come with anyway). Has 6 USB ports on the Rear Panel along with a firewire connection. The on-board graphics actually tested better in Vista than the separate graphics card I was using previously. It's worth using if you aren't doing high-end gaming. I'm not doing any high-end gaming and this fits my needs perfectly. But even if I was, the duel graphics card capabilities is an excellent feature to have.

Cons: The manual that came with the motherboard doesn't contain any indept information on the BIOS (at least not that I have found yet). But ASRock provides an excellent manual from their website that contains detailed information on the BIOS settings plus more that was left out of the included manual. No Optical or Serial on the Rear Panel, but I'm not in need of that right now so I'm not lowering its rating.

Overall Review: For those looking for a solid motherboard, this will fit your needs perfectly.

Pros: Recognized all of my devices. Didn't have to setup Dual-Channel or anything. Booted up fast. Drivers easy to setup, and comes with overclocking utility that's easy to use.

Cons: Southbridge chipset gets a bit hot in my opinion, but I may be paranoid. Other than that, no cons.

Overall Review: Great motherboard for a budget build. Crossfire ready and supports alot of memory. Also, it's AM3 ready.