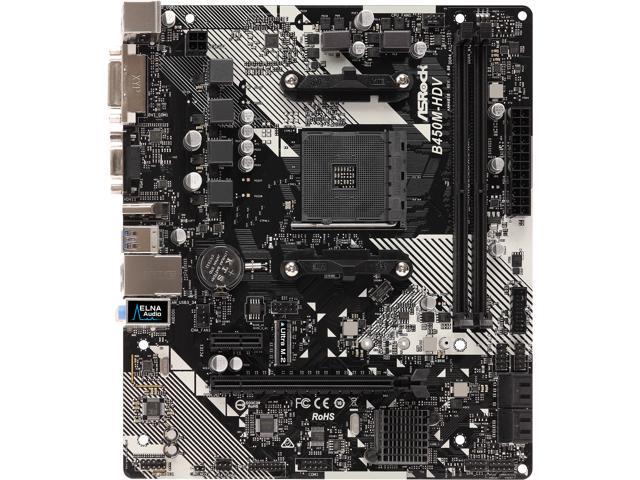 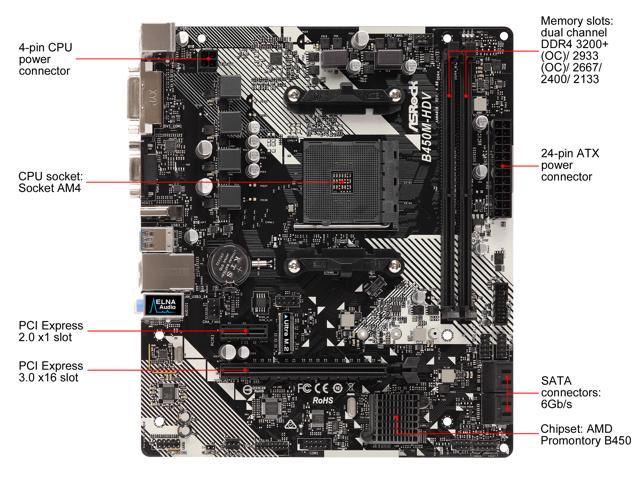 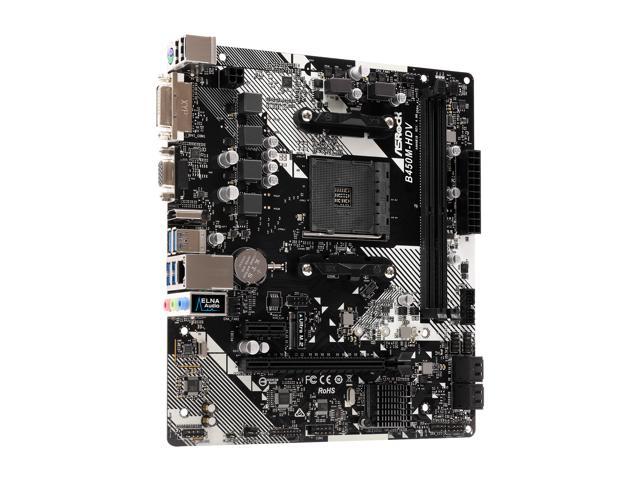 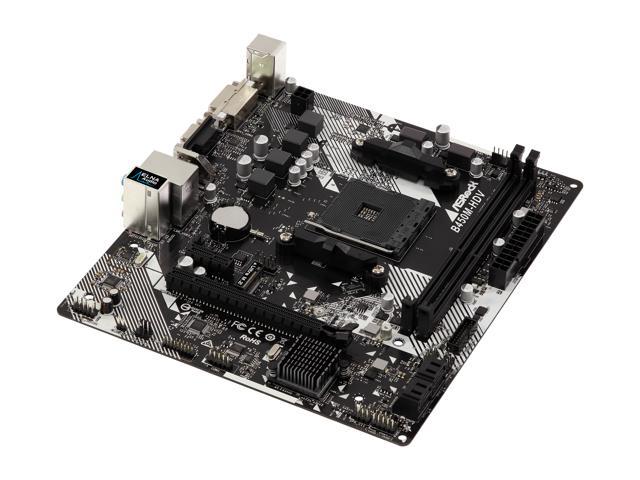 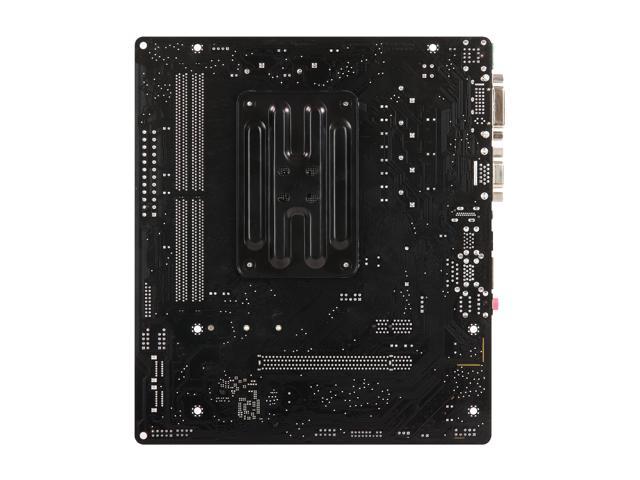 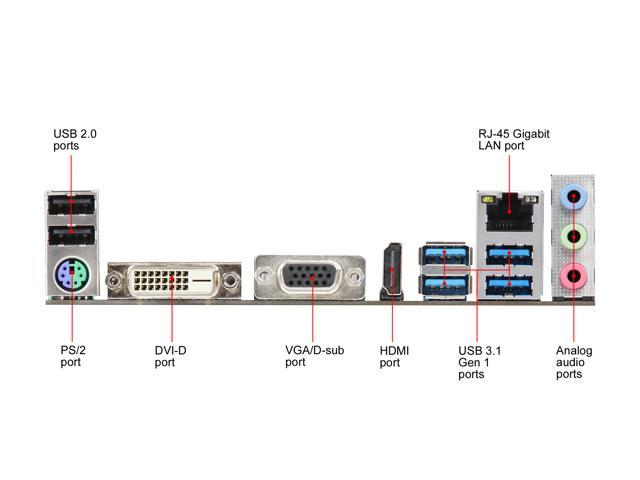 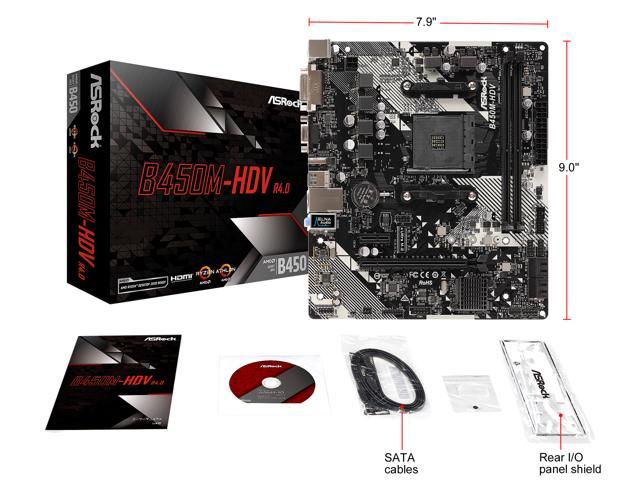 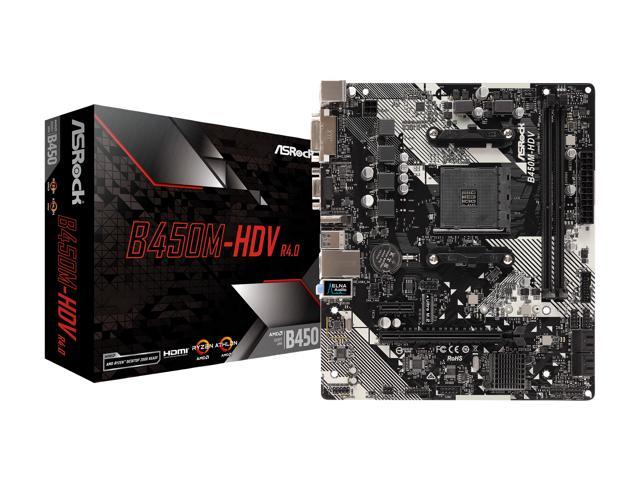 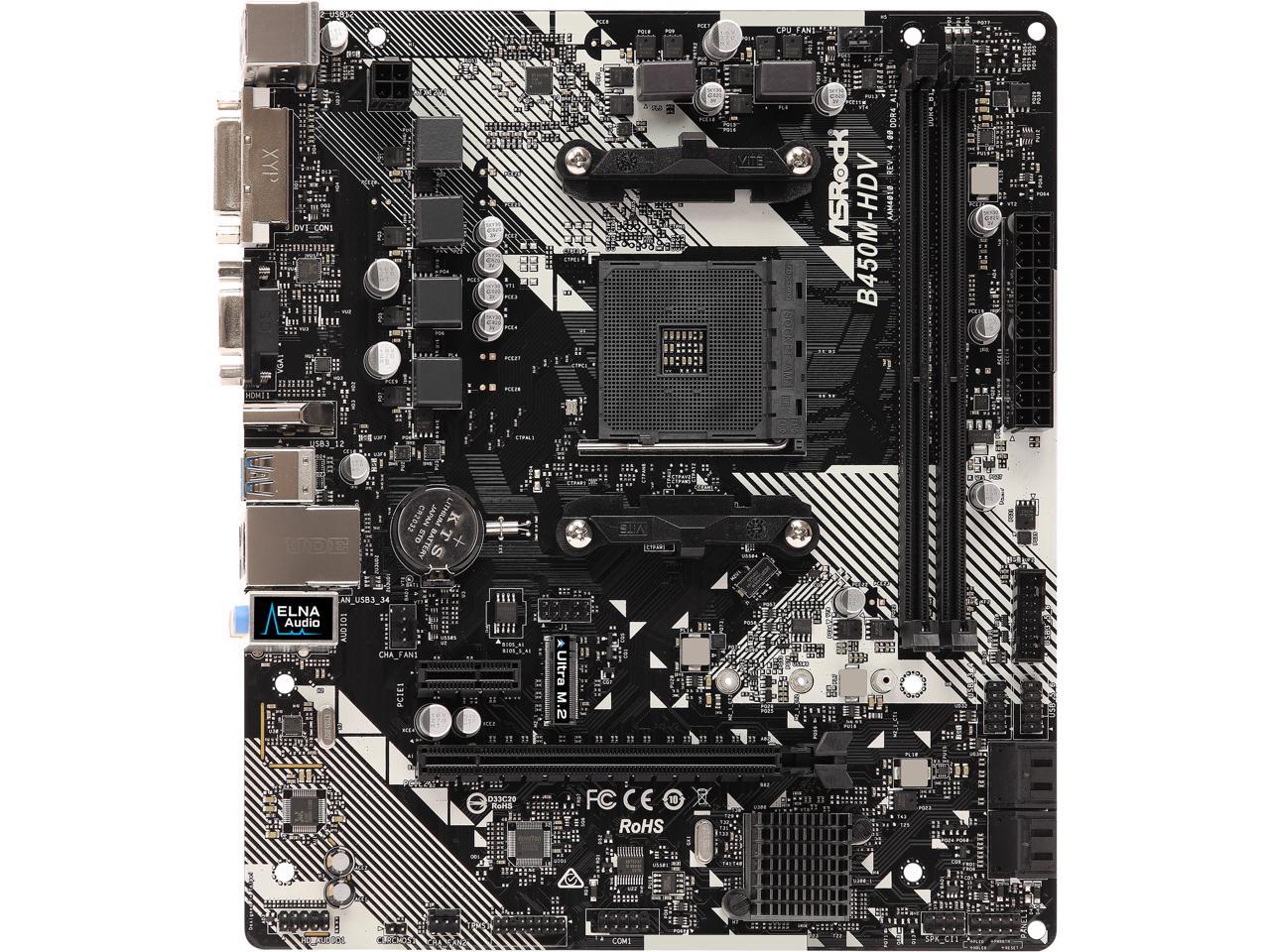 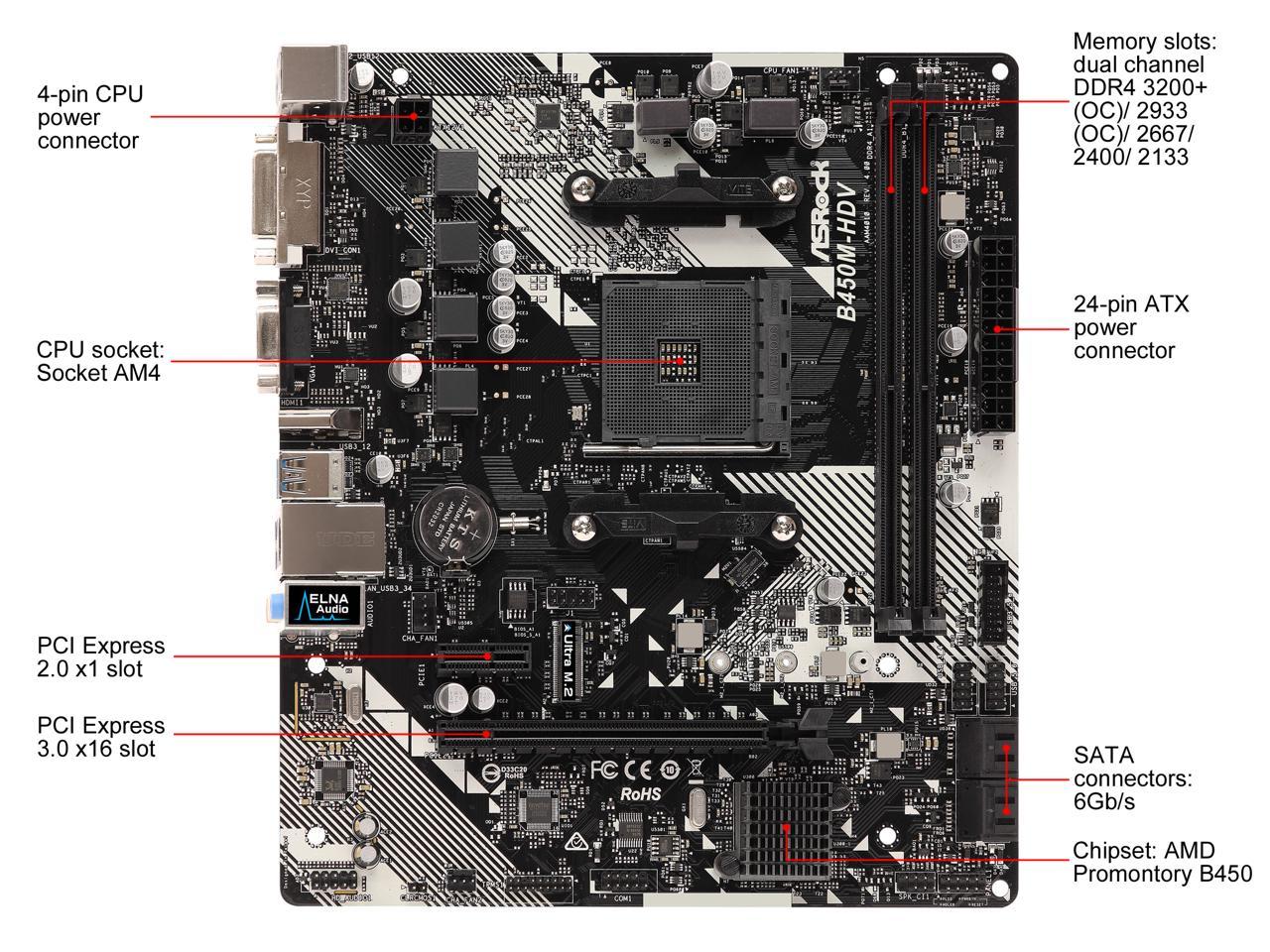 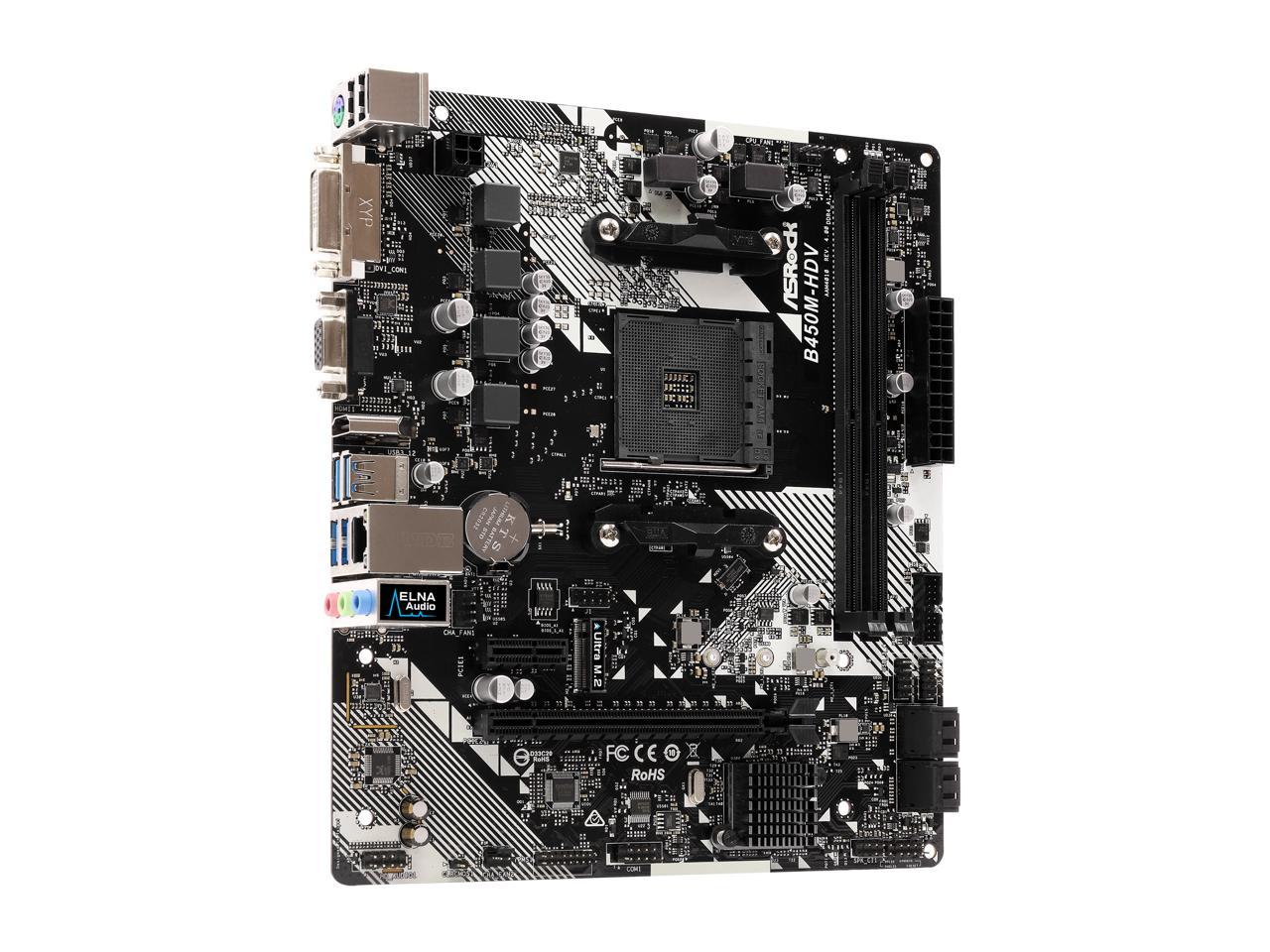 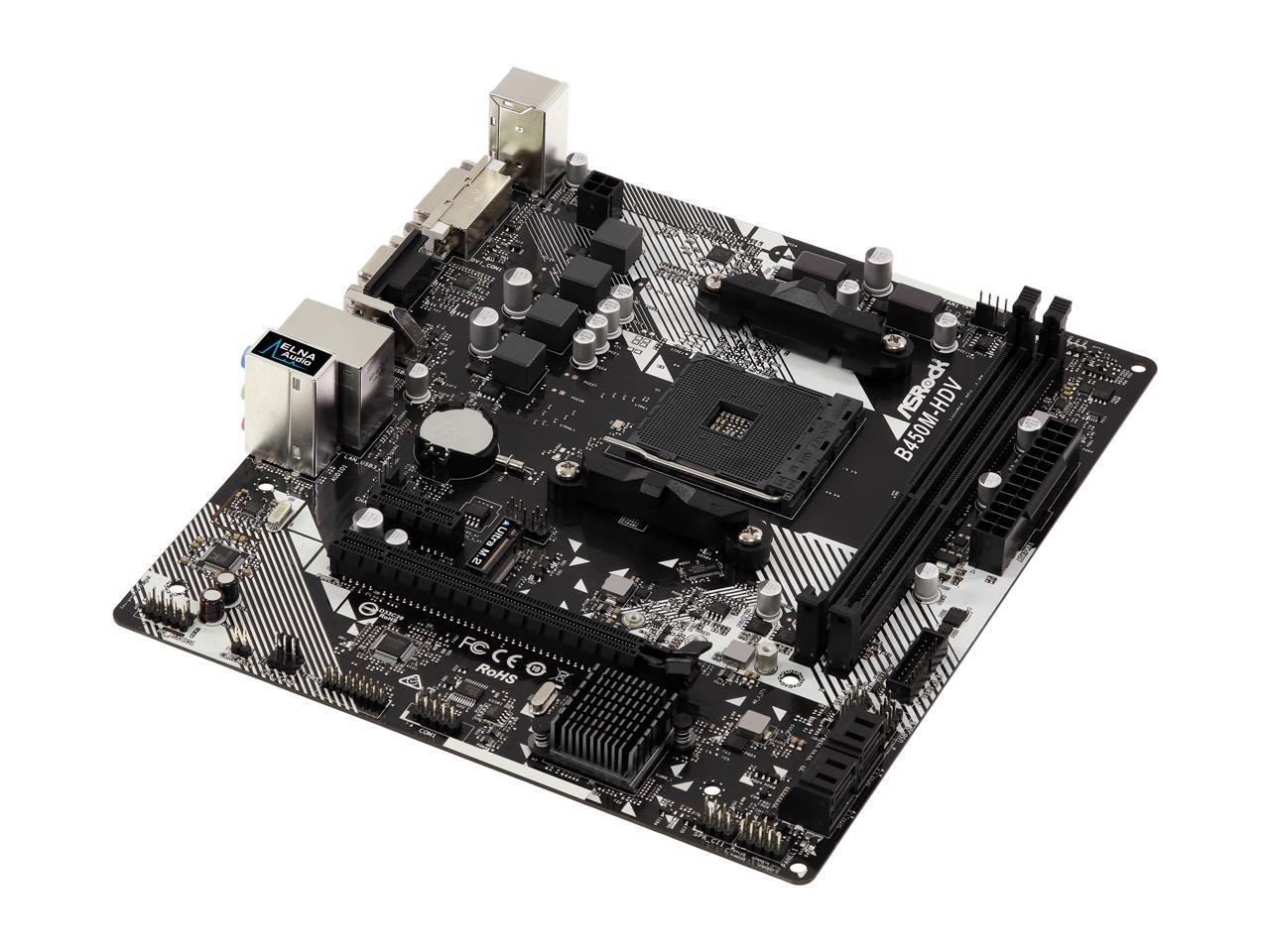 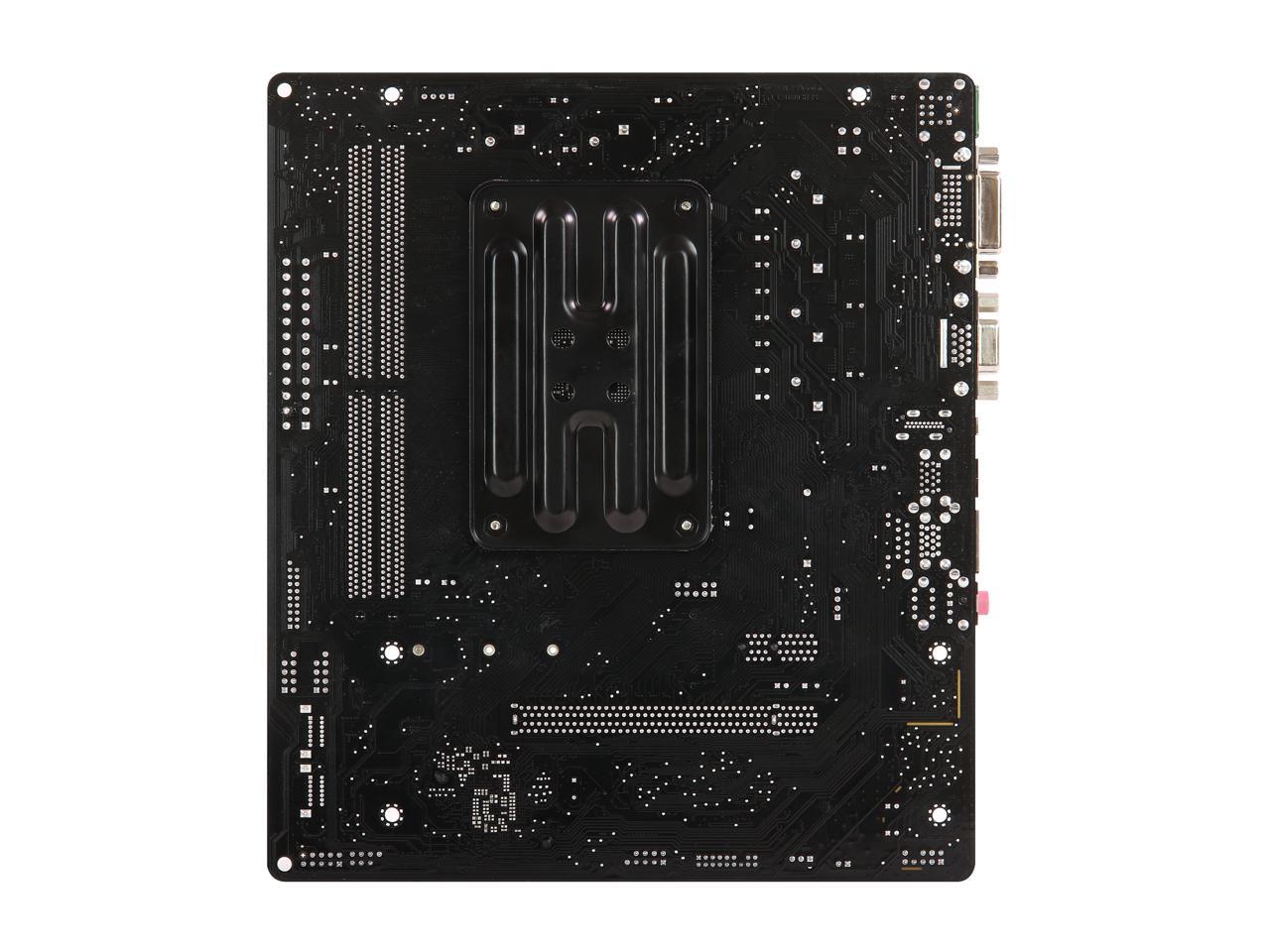 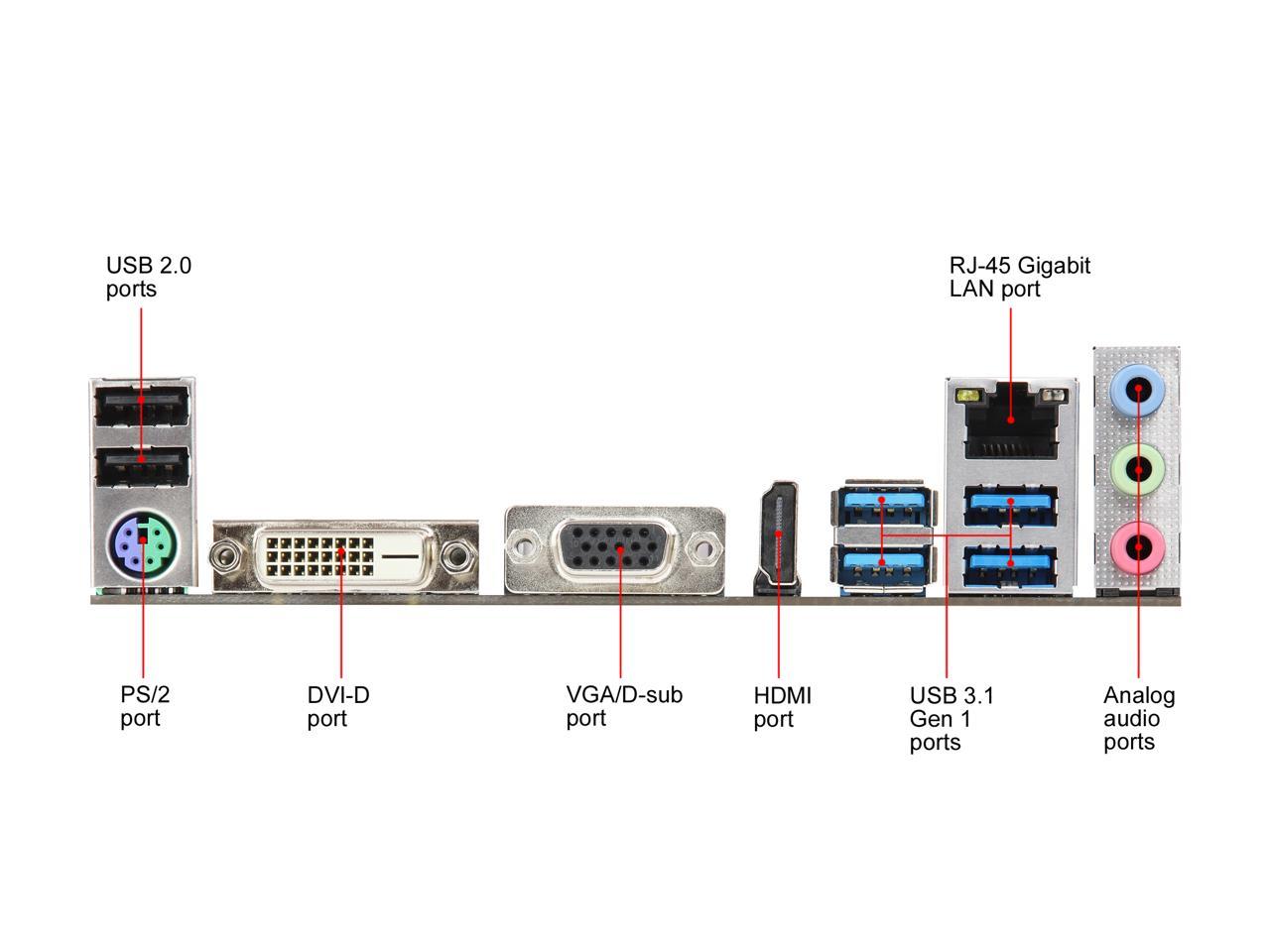 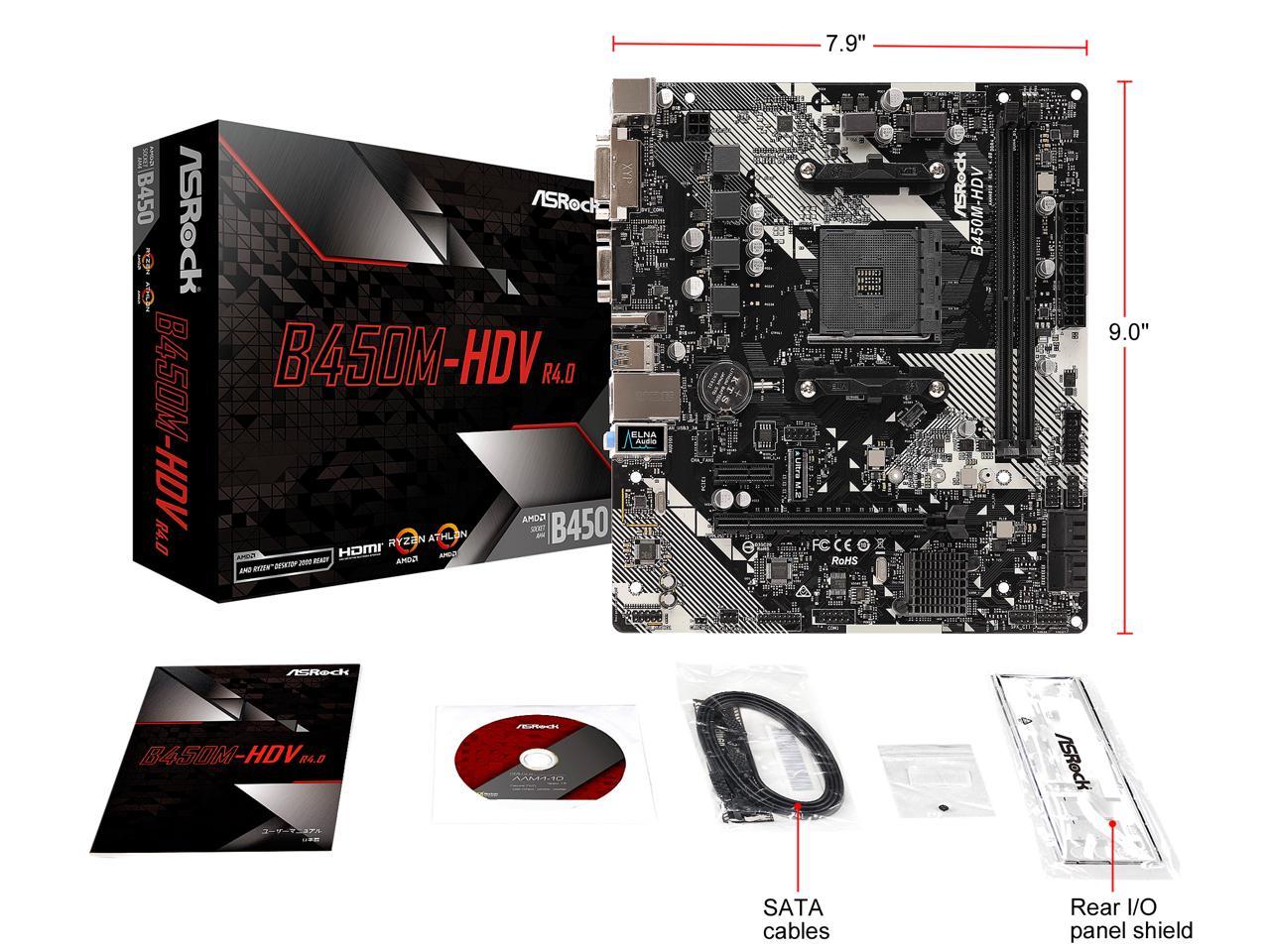 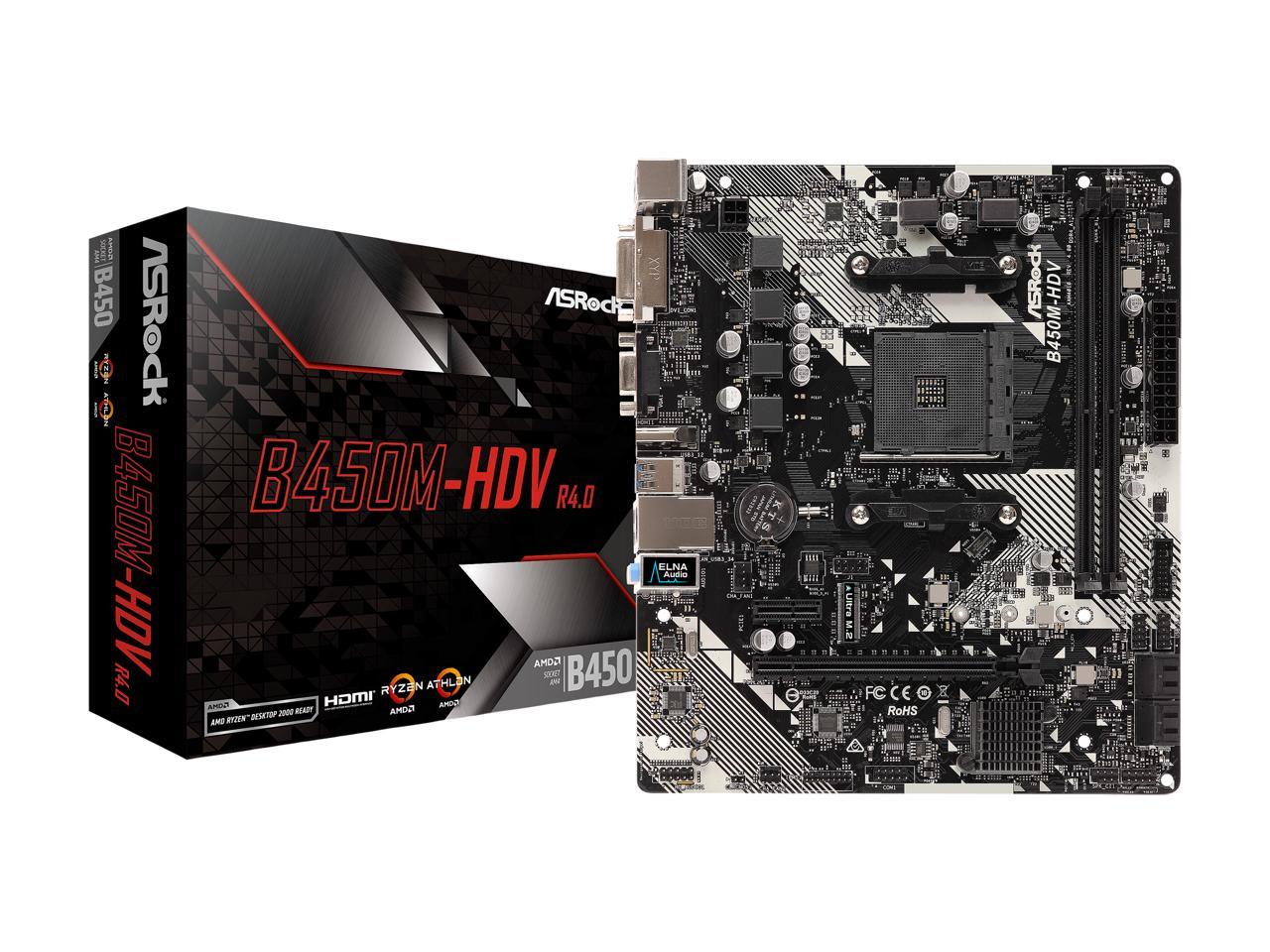 Experience a new level of performance and reliability with the ASRock B450M-HDV R4.0 motherboard. It works flawlessly with AMD Ryzen-series AM4 processors and supports up to DDR4 3200+ (OC)* memories. Oriented towards DIY enthusiasts, this board comes with one PCIe 3.0 x16 slots, four SATA 3 slots, one Ultra M.2 slot (PCIe Gen3 x4 & SATA 3)* and six USB 3.1 Gen1 ports to meet diverse connectivity needs. It even supports 4K ultra HD and triple-monitor setups. AMD StoreMI Technology unites the speed of SSD and the capacity of HDD perfectly. Quality components installed on the Sapphire black PCB ensure amazing quality and durability.

A powerful tool that combines the speed of your SSD with the capacity of your hard disk into a single, fast, easy-to-manage drive. SSDs are fast, but expensive, and offer minimal capacity. Mechanical hard drives boast large capacity for a low price, but are much slower than an SSD. AMD StoreMI technology “combines” these two types of storage into a single drive and automatically moves the data you access the most to the SSD, so you get the best of both worlds: SSD responsiveness, and mechanical hard disk capacity. You can also use up to 2GB of RAM as a last-level cache for ultra-fast data.

* AMD StoreMI software is only free with 400-series chipset based motherboards.

The PCIe Gen3 x4 Ultra M.2 interface pushes data transfer speeds up to 32Gb/s. In addition, it also supports SATA3 6Gb/s M.2 modules, and is compatible with ASRock’s U.2 Kit for installing some of the world’s fastest U.2 PCIe Gen3 x4 SSDs. The high-density glass-fabric PCB design reduces the gaps between the PCB layers to protect the motherboard against electrical shorts caused by humidity. Graphics, graphics and even more graphics! You've demanded more eye candy, so this motherboard supports triple-monitor setups. You may choose up to three display interfaces from the rear I/O to connect monitors and use them simultaneously without installing another graphics card.

* Only supports processors with integrated graphics.

These monitors are composed of a minimum of 3840x2160 pixels, which is twice the horizontal and vertical resolution of the 1080p format.

* Supported with A-Series APUs only.

Who says high-quality audio is only available on high-end motherboards? ASRock applied ELNA audio capacitors on mainstream and entry-level motherboards! Compared with traditional solid caps, the leakage current of ELNA audio caps is merely 3uA. This is the key to reduce noise level significantly and satisfy even the pickiest of audiophiles. This motherboard uses a next-generation Hybrid Digi Power design to bring precise control and smooth power. With the ensured efficient and clean power delivery to the CPU, the stability and lifespan of this motherboard is also greatly enhanced. Some sensitive digital components on the motherboard are vulnerable to power surges. The excessive current may cause your system to malfunction immediately. ASRock Full Spike Protection includes various technologies to prevent your motherboard’s components from being damaged by these unexpected voltage spikes. Pros: Boots up fast, recognized my Team T-FORCE VULCAN Z DDR4 PC3200 RAM #TLZGD416G3200HC16CDC01 and the correct timing and voltage. (You have to set it to 3200 in the BIOS) Saw my Ryzen 5 2600 at the proper 3.4GHz stock on first boot. The BIOS is rather impressive for an entry level motherboard. Lots of options available! This motherboard is also very sturdy as sometimes you'll need to use some force to push some pins and plugs into place, this motherboard can take it. Multiple USB 3.0 options available with the motherboard and case.

Cons: None that I can think of. I am totally satisfied for what its worth.

Overall Review: Its unfortunate that alot of reviewers are saying that their motherboard does not work. However I thought I was going to be one of those clients as well. I have not done a DIY PC build in about 7 years and had to get used to all the new connections that motherboards now have. At first attempt I got fan's but no video signal. I thought oh great now I have to try memory, and CMOS reset, etc... Well turns out I did not firmly seat the ATX 20+4 pin in correctly. After I did that......... no POST again!!! I again started checking connections and started to come to the conclusion that I got a DOA motherboard.... Then I noticed the ATX12V power was empty. After a bit of research I realized that I was not powering the CPU. After I got that connected, it all posted successfully and I was able to go into BIOS set my RAM speed and then Install Windows 10. Moral of the story is? Alot of times user-error is the reason for motherboards not working. Thanks Newegg and ASRock for a great product!

Overall Review: BUILD EXPERIENCE: First build in 20 years, so there was a bit of a learning curve, though not too bad. Issues: AMD drivers locked up on the first install though, which was either due to me not having installed the latest bios ( I had version P1.00, the very first one ) OR my RAM speed was set too high ( 3000 MHz based on my RAM sticks, but without XMP, initially ). Here is an install procedure which I hope will minimize frustration : 1. If this is not a fresh Windows 10 install, and you are using non-generic display drivers ( ex: AMD, NVIDIA ), uninstall them first. If you are not able to boot normally, boot in safe mode and either: a) use a proper display driver uninstaller, or b) uninstall the display driver manually via the Device Manager > Display adapters ( select and pick "uninstall" ). 2. Go to to ASRock's website for the "B450M-HDV R4.0" ( https://www.asrock.com/MB/AMD/B450M-HDV%20R4.0 ) and download the latest BIOS--aka. "firmware"--to a USB flash drive ( note: "Instant Flash" versions worked fine for me ). WARNING: this mobo is the "R4.0" sku; do not go to the mere "B450M-HDV" site like I did by mistake, initially: that's a complete different mobo ( though ASRock's site looks nearly identical )! Note to ASRock: please give motherboards distinctive names to avoid needless confusion. 3. In the UEFI, install the latest firmware. 4. In the UEFI: Activate XMP so that the firmware will automatically adjust to your particular RAM speed, latency, etc. Do NOT merely specify the RAM speed you got without XMP and expect it to work: that crashed for me. Note: I have a pair of G.SKILL F4-3000C16D-16GTZR. Setting the speed to 3000 in the bios manually ( without XMP ) was not enough and caused crashes I believe. Alternatively, if you don't choose the XMP option, set the RAM to a low speed initially, like 2133 MHz, and gradually increase it. Note: The motherboard's website contains several Qualified Vendor Lists for RAM and SSDs ( https://www.asrock.com/MB/AMD/B450M-HDV%20R4.0/index.asp#Support ). 5. Install the latest AMD drivers ( AMD Adrenalin 2019 v.19.4.1, as of this writing ). The latest driver is available on AMD's site ( note: the link on ASRock's site was a couple versions behind ). 6. Install Realtek Audio drivers from ASRock, Realtek LAN drivers, and Motherboard Utility ( <- this last one is optional, I believe ) from ASRock's site. Note: The SM Bus controller and another missing driver in the Device Manager will be downloaded automatically via Windows Update. STATUS: All drivers are presently installed, and the system is stable and running on 3 screens, simultaneously.

Cons: its light and the usb port is on the right side

Pros: No problems encountered when building this new system with Win10 Pro. Quality is good and price was great. Replaced an 8 year old HP. I like it!

Cons: No heat sink for vrm's. But down facing cpu cooler cools it and motherboard just fine and good case ventilation of course. BIOS is fluid, ever changing. Upgraded from 1.0 to 1.4 to 2.2 with no problem. Board is Revision #4? Hopefully got the bugs worked out. Memory clips a little fiddley. Best to install CPU+cooler, SSD and memory before putting MB in case.

Pros: This is a good budget board, it has all the basic features such as m.2 usb.3, etc. Also has a good amount of I/O in the back for the money.

Cons: It only has 2 DIMM Slots, the Gigabyte B450M DS3H is not a huge step up but that board has 4 DIMM Slots.

Overall Review: Good budget board for anyone looking to game or buy a cheap computer that can play games.

Cons: Didn't want to work with a Mushkin Pilot M.2 SSD, MKNSSDPL250GB-D8. NewEgg even RMA'd both this mobo and the Mushkin part but the mobo never detects the SSD. Swapped with a TeamGroup SSD and it works fine. The default BIOS settings for the CORSAIR 8G 2400 DRAM generated errors during a Memtest86 run. Tried XMP settings and still failed. Simply changing the DRAM speed either lower or higher than 2400 passes this test. Left this setting at 2800 and the system works fine. Memory is CORSAIR CMK8GX4M1A2400C16R, CPU is Ryzen 5 1600.

Overall Review: Works ok but it wasn't plug'n'play. Required some tweaking to get working with the parts I used. As such I wouldn't recommend to an inexperienced system builder. Tech support is prompt and responsive, as is NewEgg's service.

Pros: Not a top end, high dollar MOBO, but has the basic functions that I want

Cons: Only drawback was my mistake for not checking clearance of cooler with RAM. AMD (supplied 2600 processor cooler) logo must face away from sticks of RAM. Quite the challenge to separate thermal paste stickiness and spin 180 degrees.

Overall Review: Probably the third board purchase with no complaints. Recommend to the misers out there. Bang for the buck is to be had for the savvy shopper.

Pros: It runs well, no issues, even OCs the RAM to a decent degree.

Cons: BIOS is really hard to find things in, have to go through back menus to get to most of it, seems odd.

Overall Review: Buy it, if you can be sure you don't need a BIOS flash. Last ASRock board I had to flash tanked, because they sent me a board that was "2000 ready" (it was not), and they were absolutely no help.