This item is currently placed on backorder status and will not be shipped until inventory is confirmed. You will not be charged until this order is processed. Newegg cannot guarantee inventory for backordered items.
Price Alert
Add To ListFound on 83 wish lists 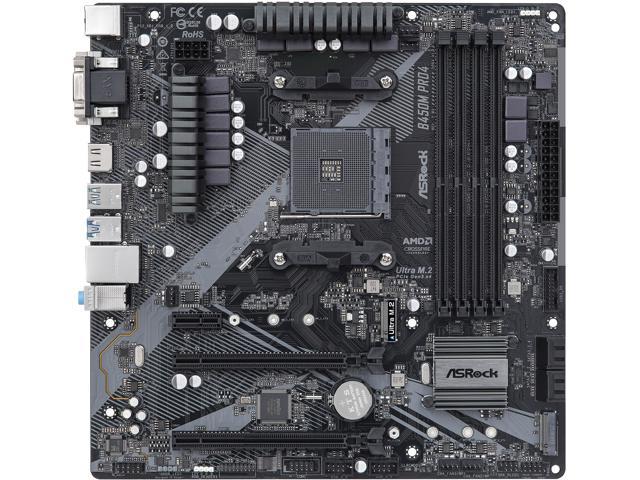 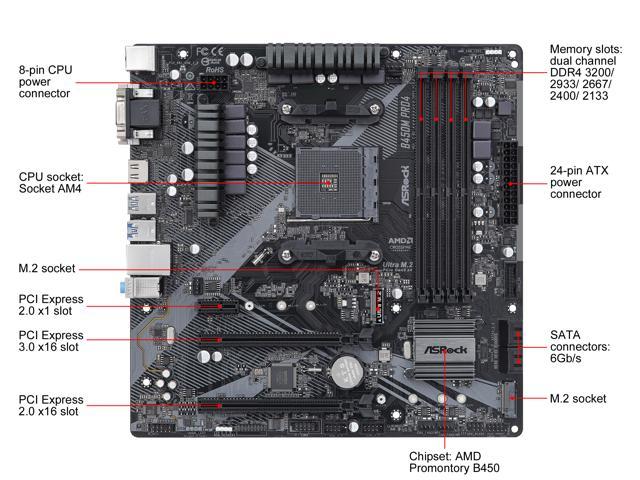 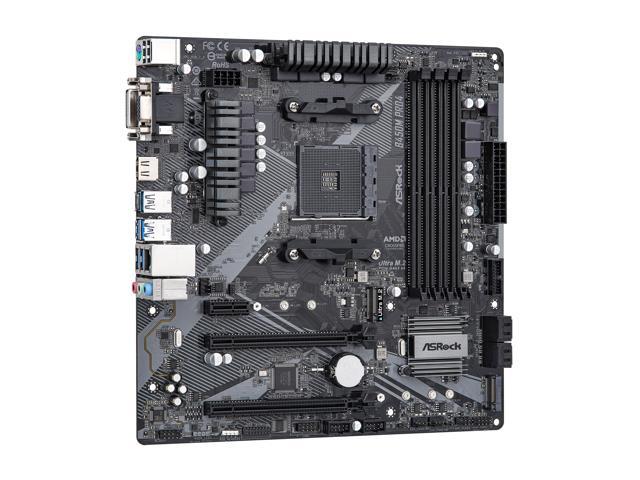 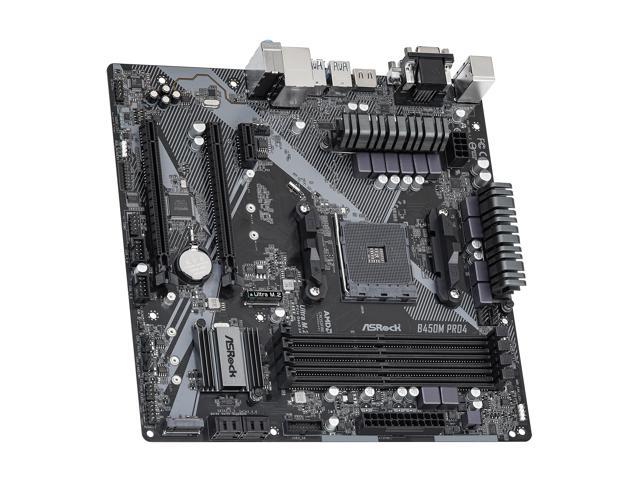 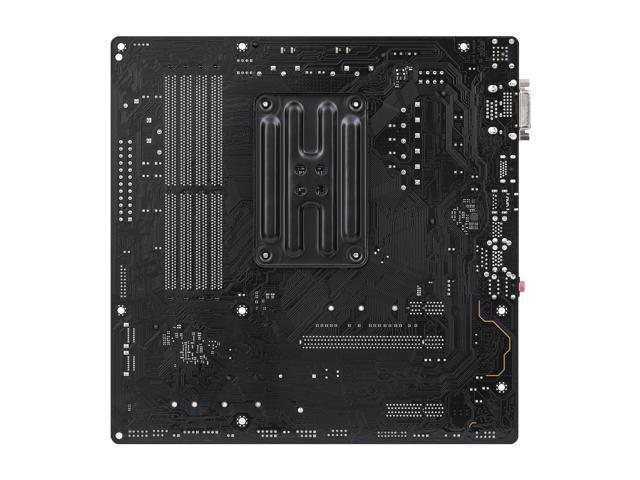 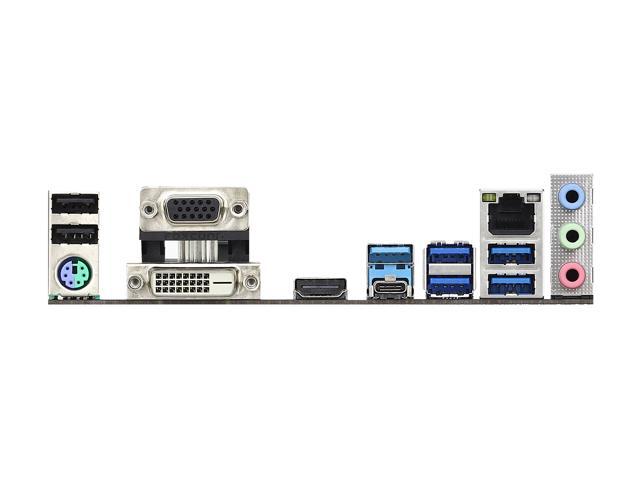 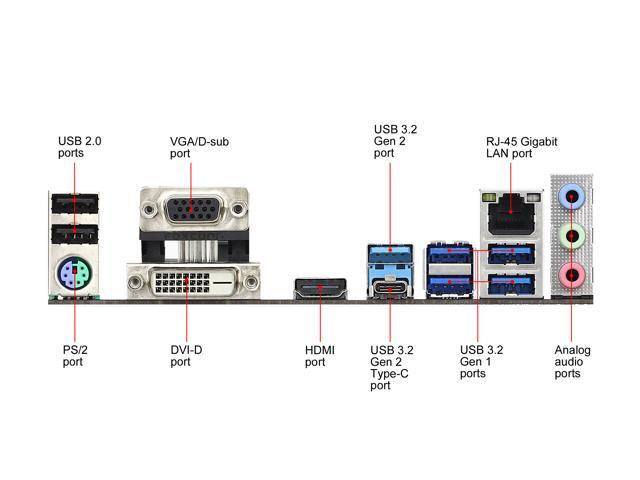 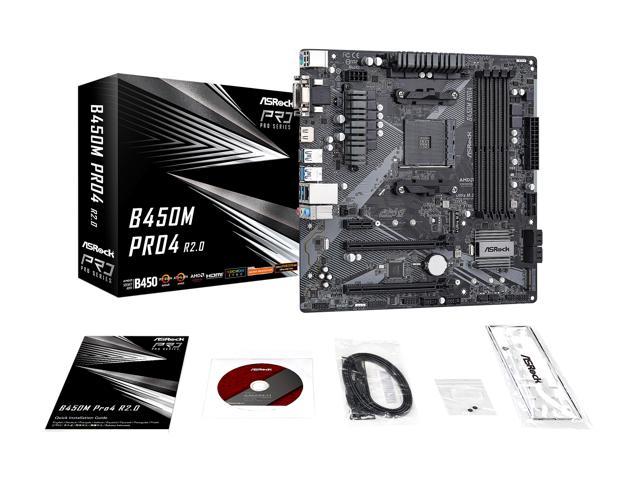 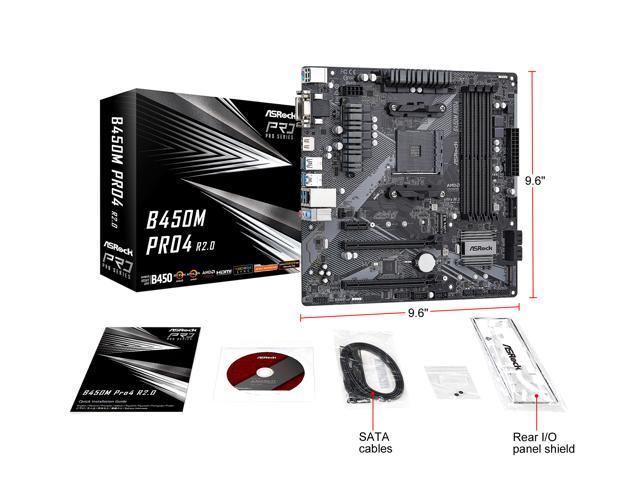 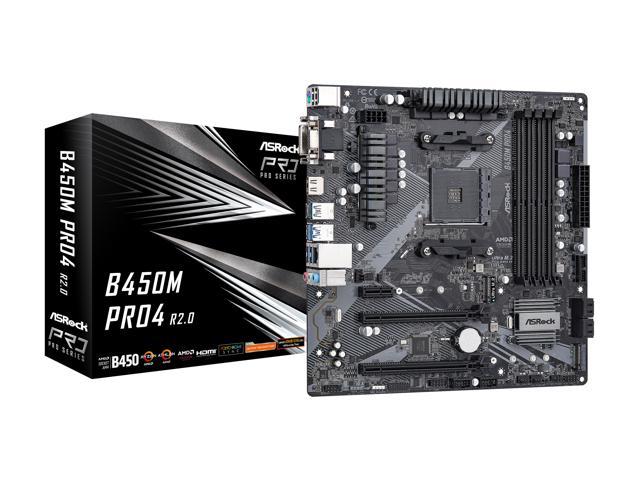 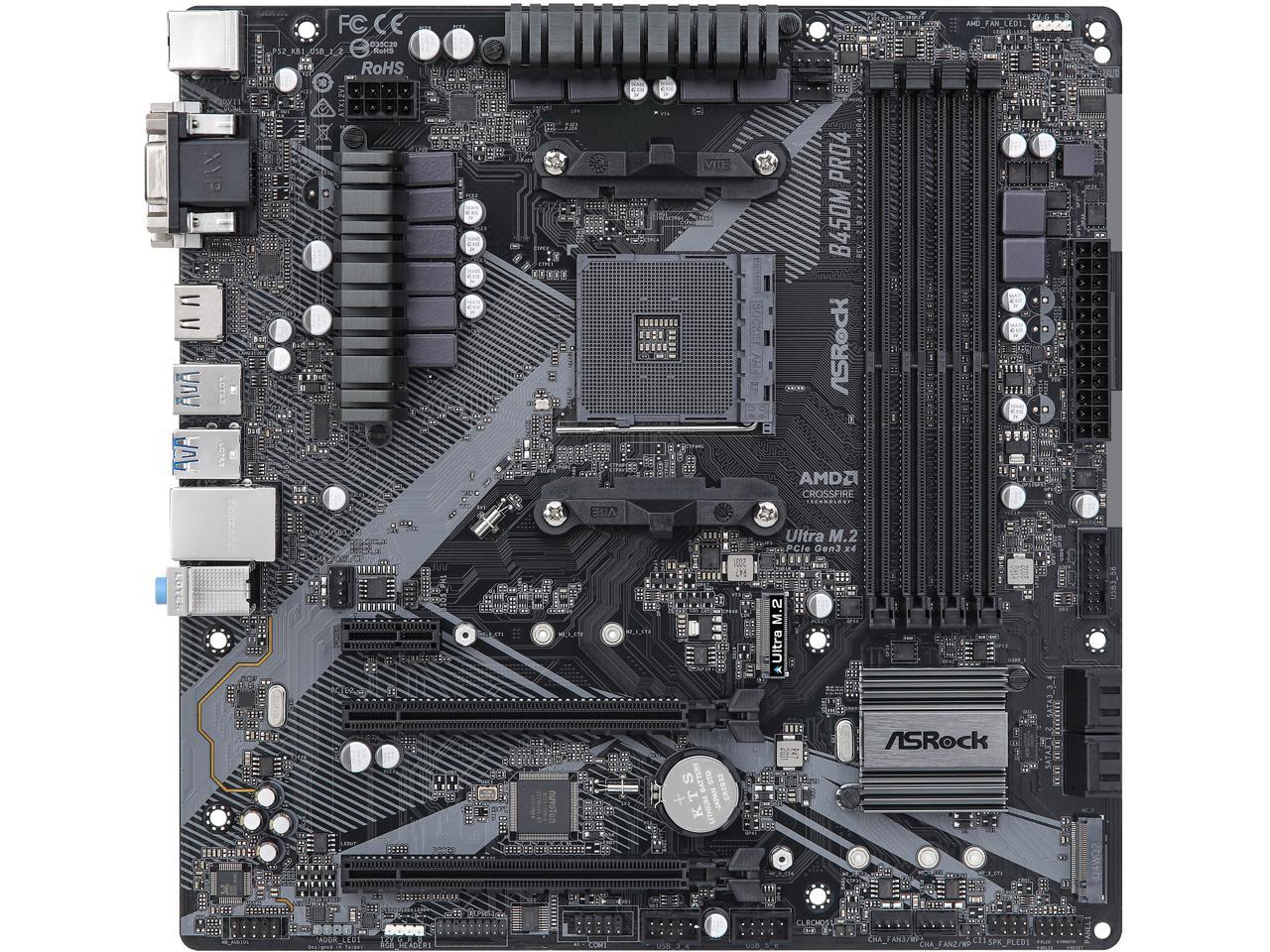 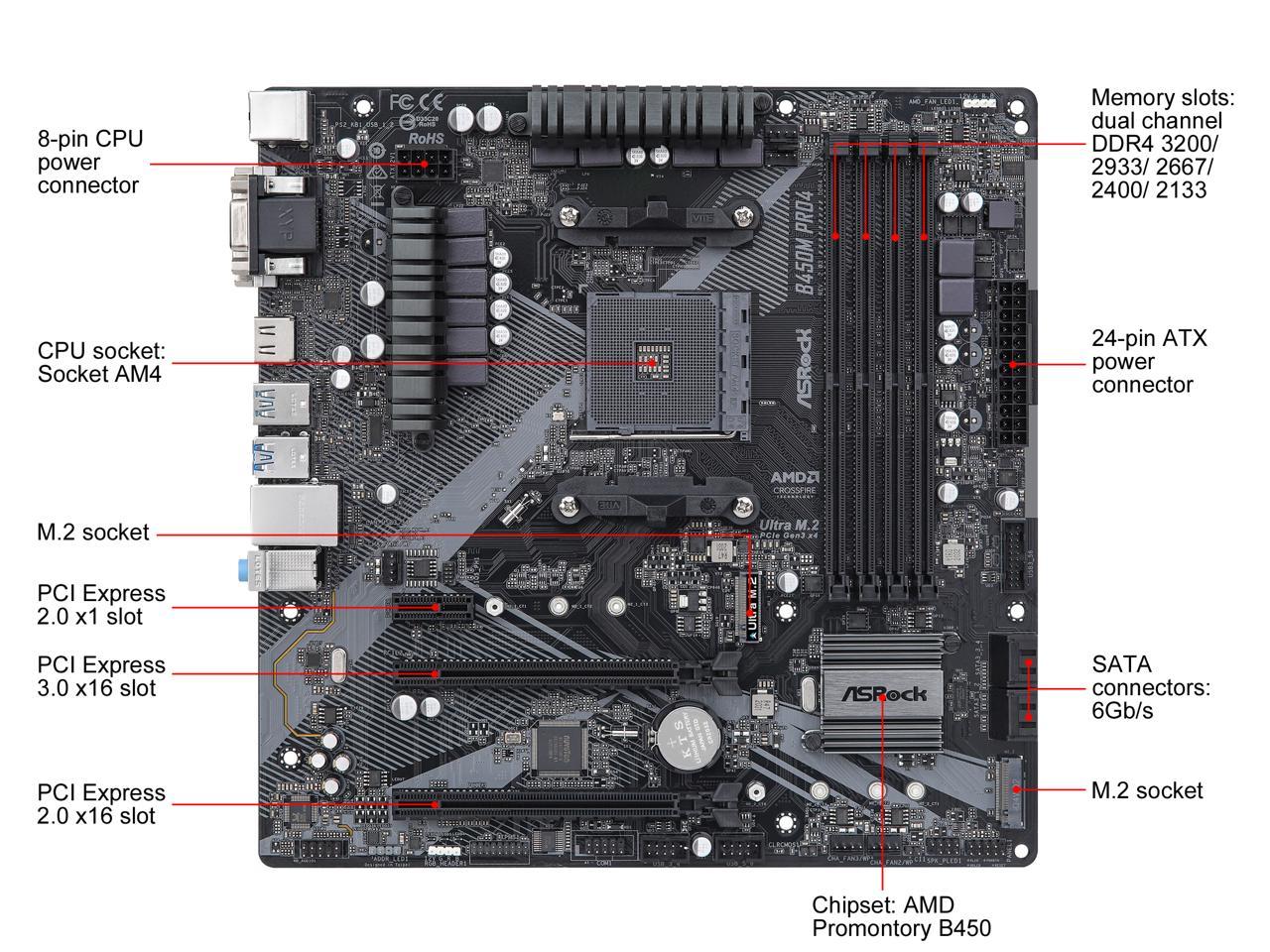 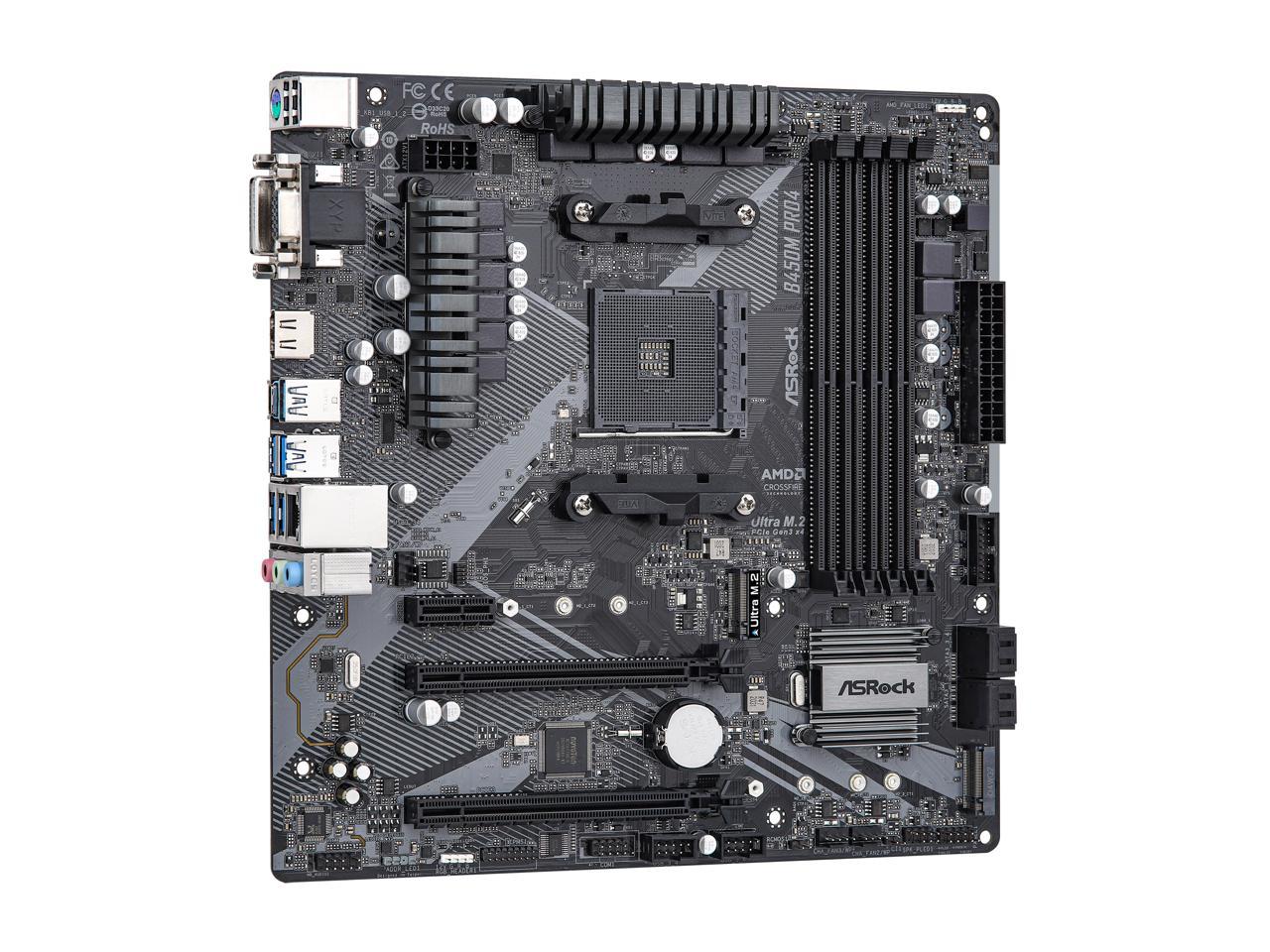 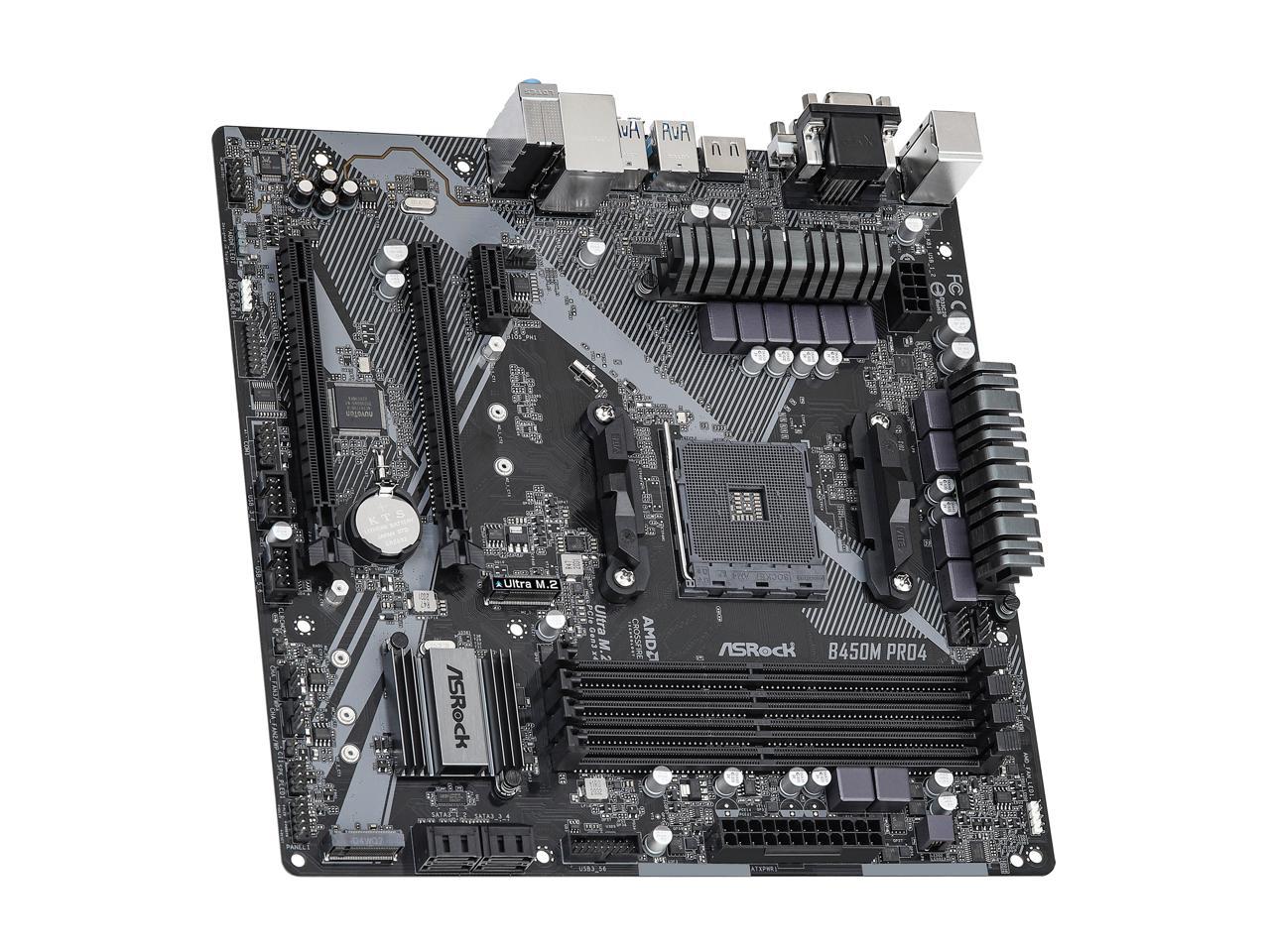 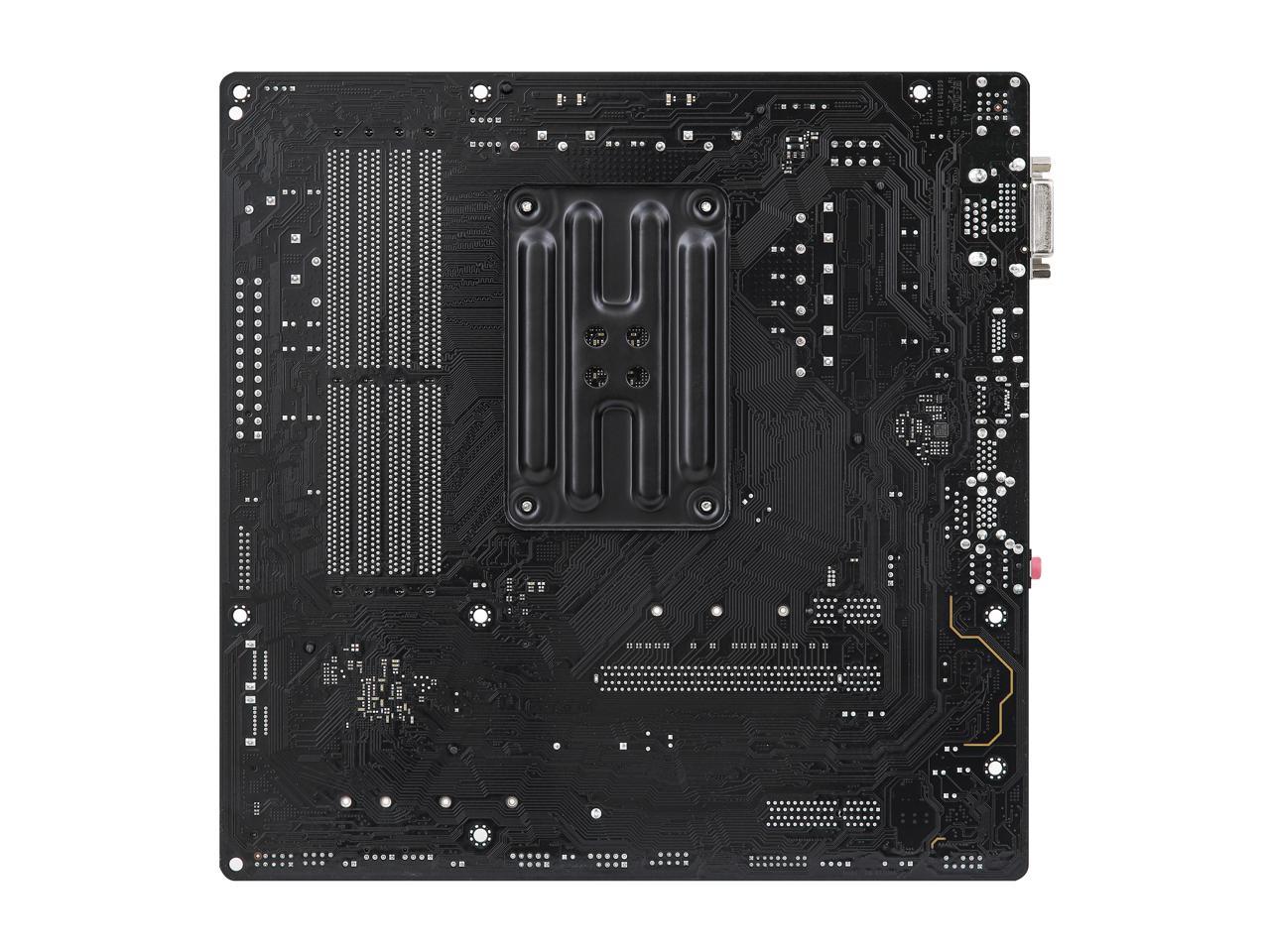 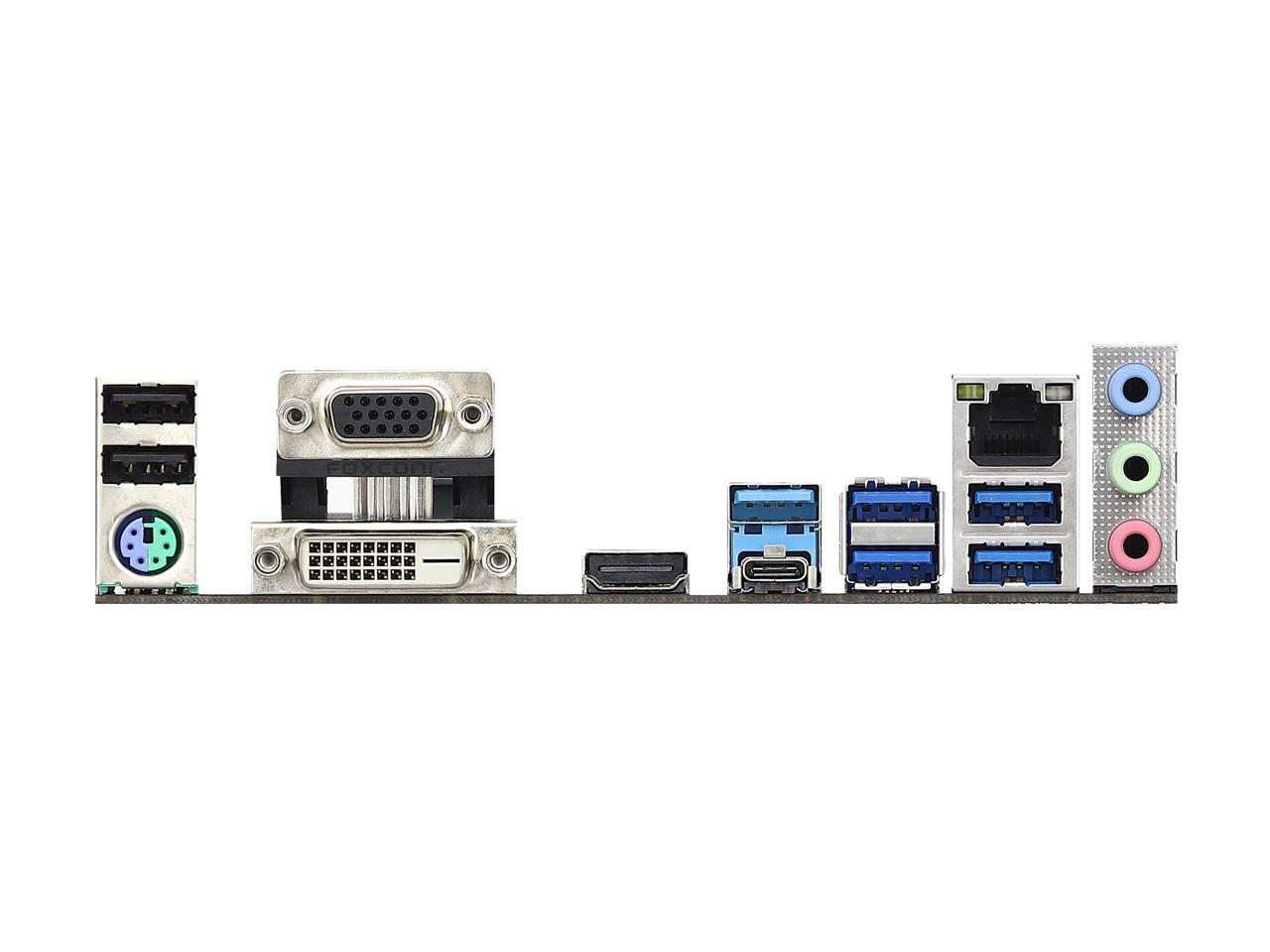 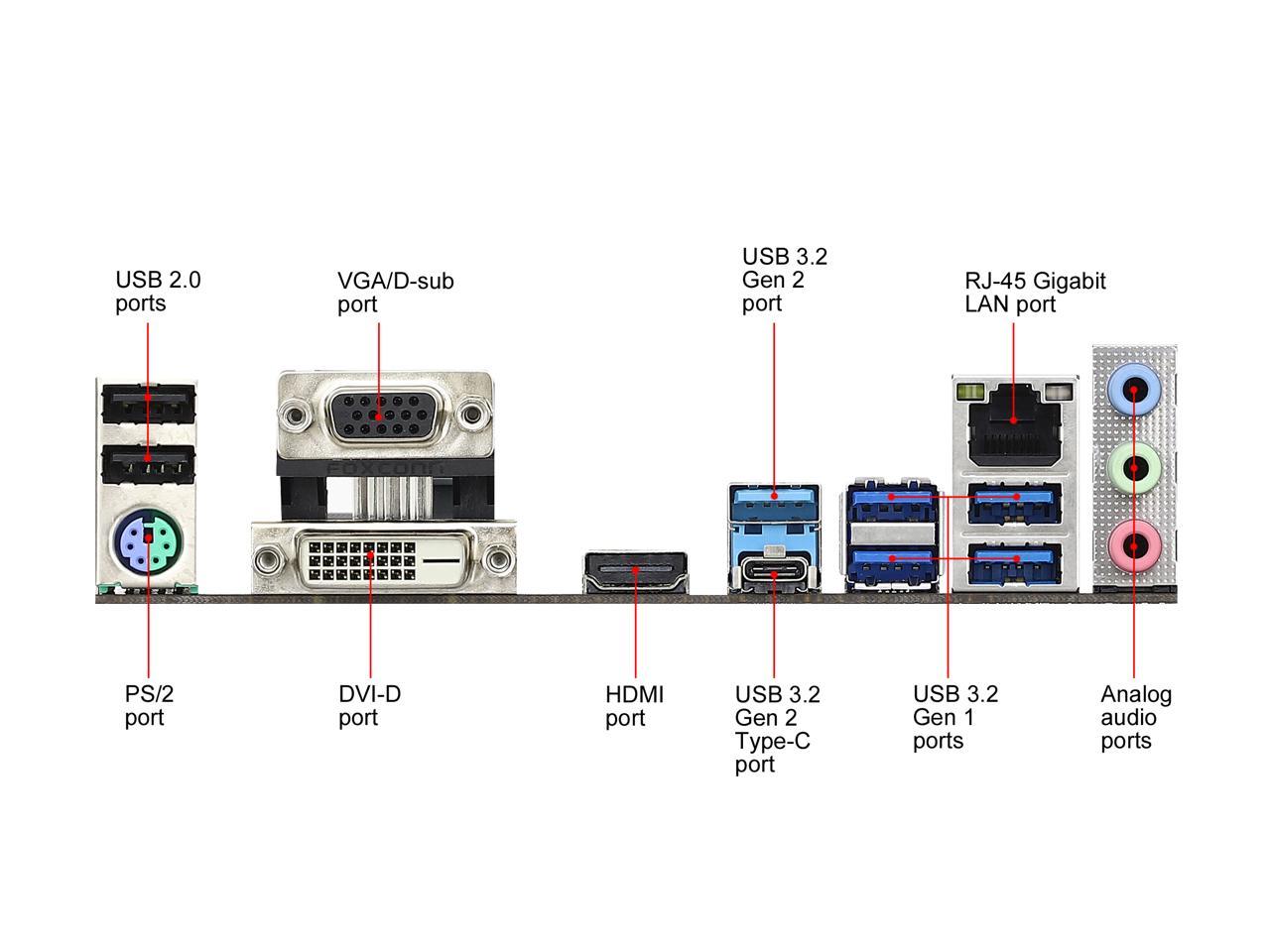 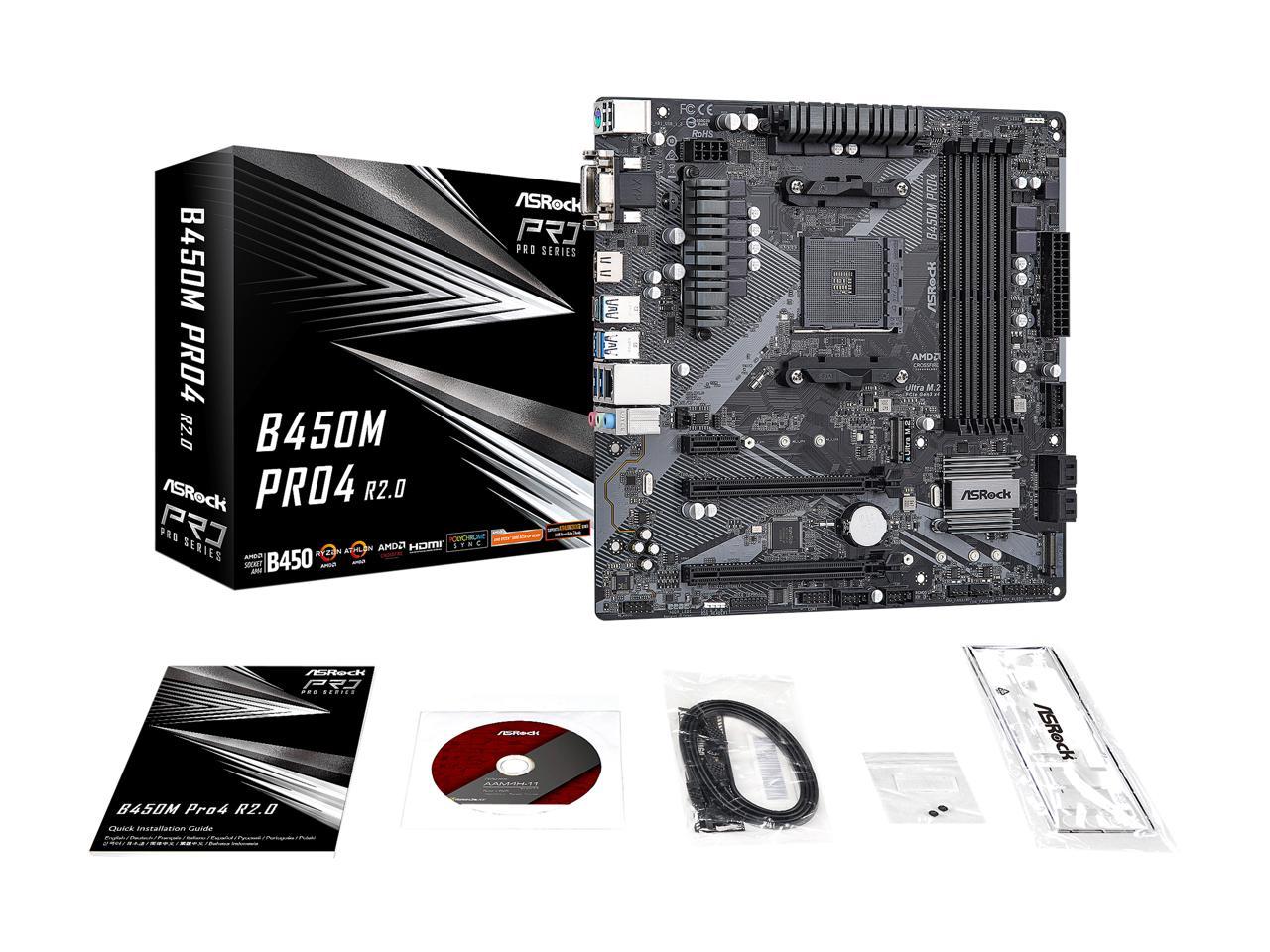 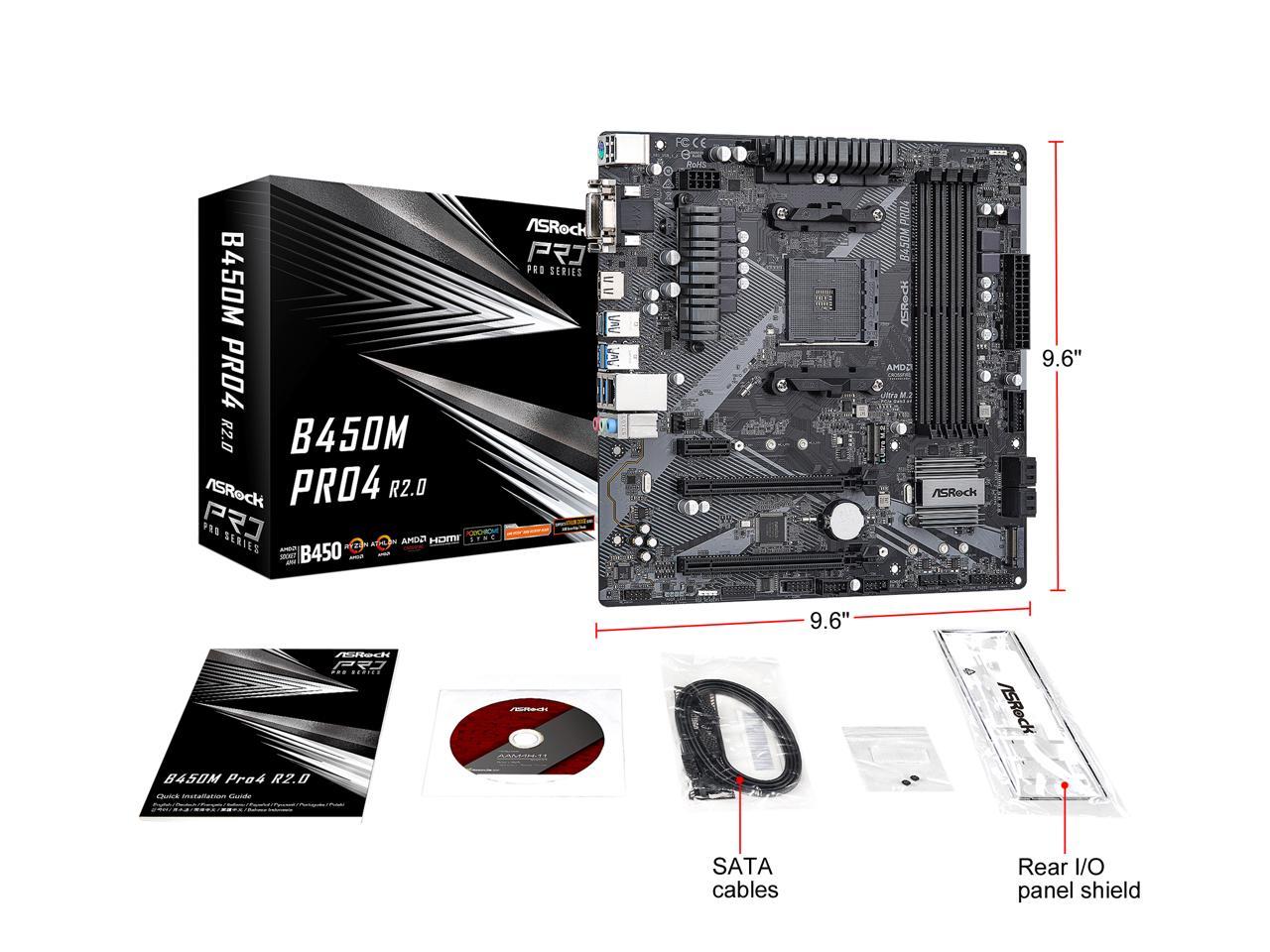 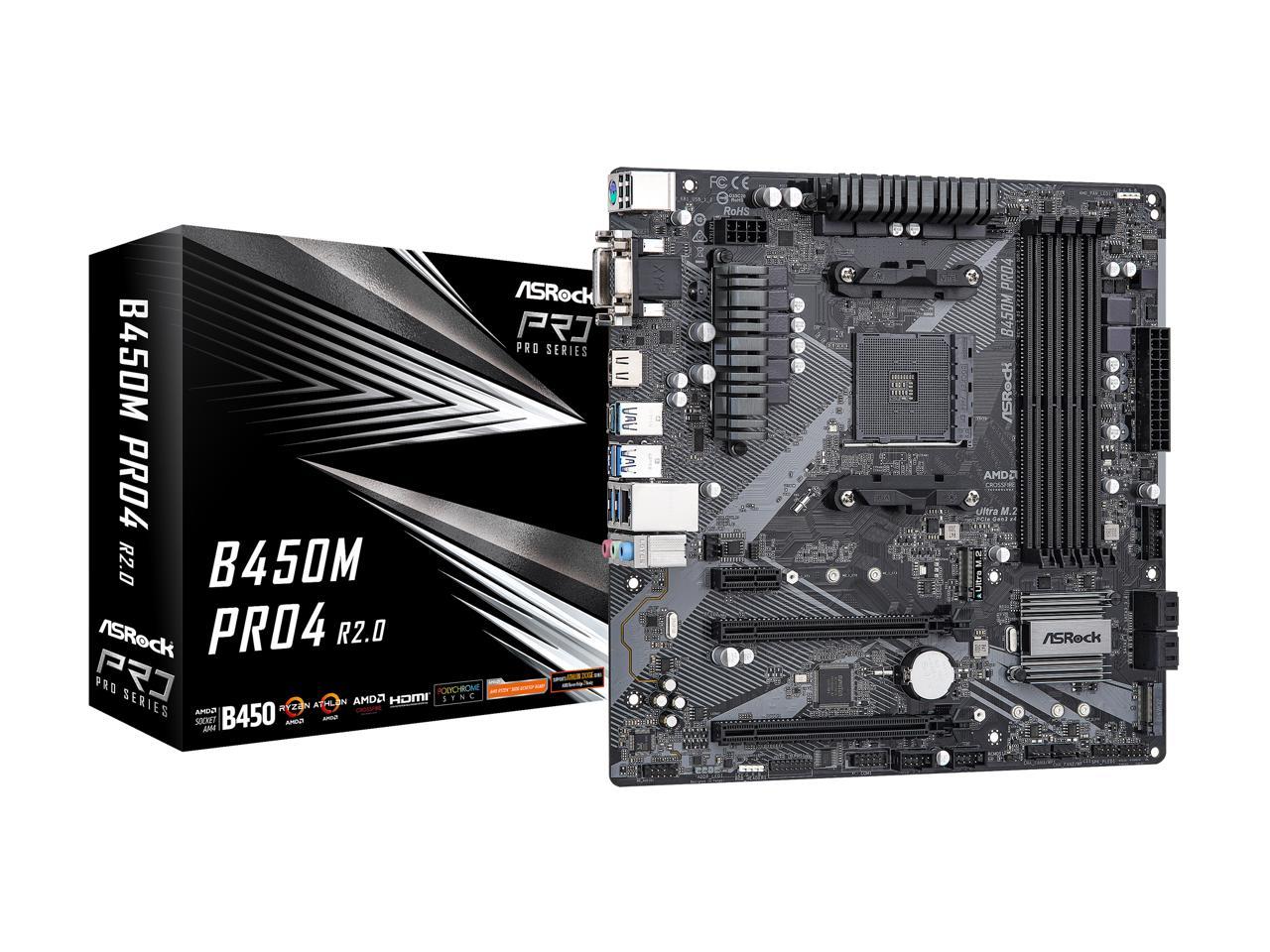 * Processors with integrated graphics are required to use onboard video outputs.

This motherboard features onboard RGB headers and an addressable RGB header that allow motherboard to be connected to compatible LED devices such as strip, CPU fans, coolers, and chassis. Users may also synchronize RGB LED devices across the Polychrome RGB Sync-certified accessories to create their own unique lighting effects.

Two of the world’s fastest M.2 slots. One delivers up to PCIe Gen3 x4 32Gb/s transfer speed, while the other one supports SATA3 6Gb/s mode.

This motherboard has a pair of onboard Type-A and Type-C USB 3.2 Gen2 ports built on the rear i/o for supporting next generation USB 3.2 Gen2 devices and to deliver up to 10 Gbps data transfer rates.

A powerful tool that combines the speed of your SSD with the capacity of your hard disk into a single, fast, easy-to-manage drive, AMD StoreMI technology “combines” these two types of storage into a single drive and automatically moves the data you access the most to the SSD, so you get the best of both worlds.

Complete with all three types of most used connectors! Packed with a D-Sub + DVI-D + HDMI combo. Plus, the HDMI port supports 4K resolution.

* Supported only with processors with integrated graphics. Please check CPU support list from each motherboard webpage.

Graphics, graphics and even more graphics! You've demanded for more eye candy, so this motherboard supports Triple Monitor. You may choose up to three display interfaces from the rear i/o to connect monitors and use them simultaneously without installing another graphics card.

* Supported with processors with integrated graphics only.

This motherboard uses a next generation Hybrid Digi Power design to bring precise control and smooth power. With the ensured efficient and clean power delivery to the CPU, the stability and lifespan of motherboard is also greatly enhanced.

Pros: Has practically all of the features you would want. All in all a solid contender at this price point.

Cons: Wish it had indicator LED's to let you know what might be erroring when there are boot issues. I also wish there were better utilities for it for fan management and overclocking.

Overall Review: I would definitely recommend this to others. In fact this is my third one.

Cons: The i-o shield on the back panel could be slightly nicer looking. Just plain stainless steel look. But for the price, I can't really complain.

Overall Review: I used this motherboard to house an Amd Ryzen 5 3600X, 16gb of 3000mhz ddr4, with a GTX 1070 & a couple storage drives inside a mid-tower chassis. So far it's working out great. The added heatsinks on the power delivery phases is a welcome advantage over other value priced boards. And this board has a bunch of i-o. 2 M.2 slots, 2 Pcie 16X slots & 4 ram slots. So that's pretty good for an MATX board in this price range.

Pros: It works, its cheap (relatively), and it's widely compatible

Cons: Non for the mother board itself

Overall Review: I had a stock hp envy 750-116. It was an ight PC at best. Along with my gtx 1050. Not ti. I was literally pushing bare minimum. It played red dead 2 with crashes (not very often Ill admit) and modded settings go go extra low. I purchased this, 16 gb of 3200 ddr4 ram, and a ryzen 5 1600 and the hp envy case and power supply and power buttons etc were all compatible! First time hooking up my own mother board and it booted perfectly first try. Just switched the Mobo ram and cpu. Best budget build ever

Pros: It took me an hour to get it set up and running and it came exactly as detailed on the listing. Greatly reccomended for micro atx builds probably one of the best for the money. Also cones with 2 nvme slots which is nice

Cons: My fan rgb isnt working and theres no clear directions how to set it up for me being more of a beginner theres probably an easy fix but it wasnt clear enough for me

Overall Review: 10/10 for anyone looking for a micro atx board at a good price

Pros: Supports all the Zen-based AM4 CPUs Value priced micro-ATX with 4 fan connectors

Overall Review: I built a lot of AsRock mini-ITX based PCs. Two X470 Gaming-ITX/ac Three B450 Gaming-ITX/ac One B550 Phantom Gaming-ITX/ax One A520M-ITX/ac I had almost enough left over parts to build another computer, and I wanted another B450 Gaming-ITX/ac, but they disappeared from the market some time ago. They have Intel-based network chip and I like mini-ITX. Problem with B550 & A520 is that they don't support older AM4 CPUs, and A520 also doesn't let you overclock or even underclock properly. I don't understand this arbitrary decision by AMD. X570 supports all of them, but I don't want to spend that kind of money. This was the cheapest reasonable option that would work with my older AM4 CPU (R7-2700), so I went for it. I had to buy another case because the extra one I had was for mini-ITX only. All in all, I can't complain about the motherboard, especially given the low price. It came loaded with the latest BIOS (5.40 / AGESA 1.2.0.6b as of today), and even though AsRock site warns you about using older CPU with newer BIOS, I never had a problem with that, even on other boards I have. I threw in all my old parts (R7-2700, 1050Ti, two sticks of 2133MT ECC UDIMMs), old M2.SATA SSD, and lots of old 3-pin fans. Quick testing with Prime95 showed no issues. I like how the board supports speed control for older 3-pin (non-PWM) fans through voltage control. One thing I noticed is that it's a bit picky with memory speeds/timings. The same DIMMs that would run at faster speed on mini-ITX board would be unstable on this board. It's probably because all my other boards have just 2 DIMM slots, whereas this one has 4, so more traces, more noise. This is entirely as expected. On a slightly unrelated note, I had an issue at first which turned out to be dirty PCIe pins on my old 1050Ti. Wiping it with alcohol cleared that problem up. One needs to be careful of blaming innocent parts, especially when dealing with old parts-bin parts.

Pros: After a CPU upgrade, I was left with a Ryzen 3 1200. I was looking for a basic motherboard so I could reuse the CPU. It's currently working just fine as a HTPC for the living room. Also, I should mention that, even though the description does not mention compatibility with Ryzen 1000. And even though the board was flashed with the latest BIOS (5.30) from Asrock, the Ryzen 3 1200 was recognized right away.

Cons: The Micro-ATX Antec case this board went in was extremely tight. So tight that I had to use 90 degrees SATA cables as the ports are horizontal instead of vertical. And because of that, I can only access the two top ports... If I ever want to use the lower ports, I'll have to "dremel" a small portion of the case... I wonder if this Micro-ATX board is a standard one or one that is slightly larger. I suggest you measure twice !

Overall Review: This B450M Pro4 is working fine for me. Of course, it's being used as a HTPC, so not a lot is being asked of it. I should mention that final price was supposed to be only 50$ (CDN) + shipping and taxes. That would be after a mail-in rebate of 30$ Unfortunately, I did not read the small print. You are to ship the required documentation within 10 days of purchase. It's been 15 days... Please READ THE SMALL PRINT !