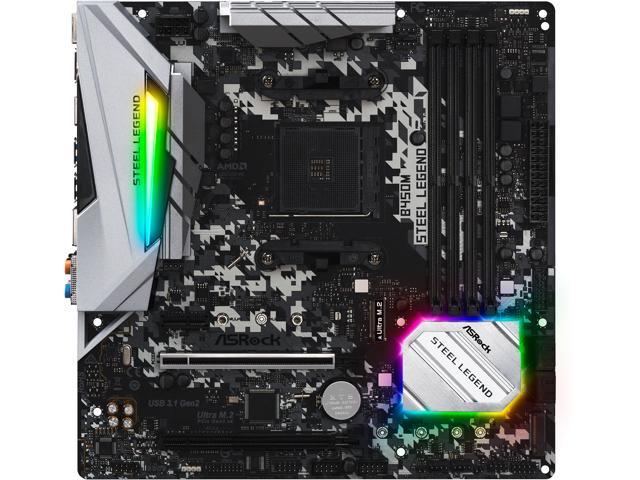 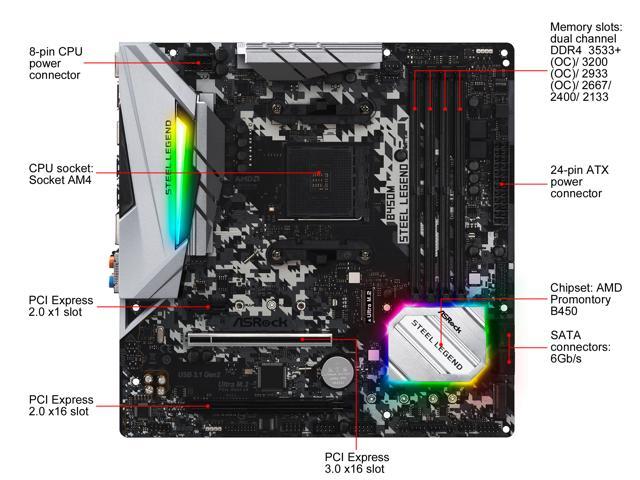 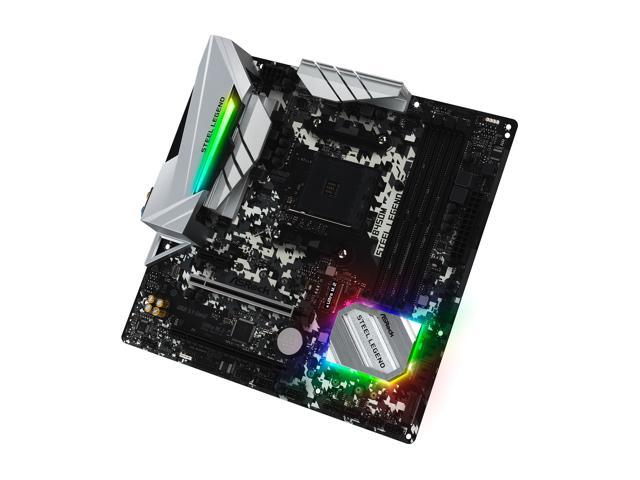 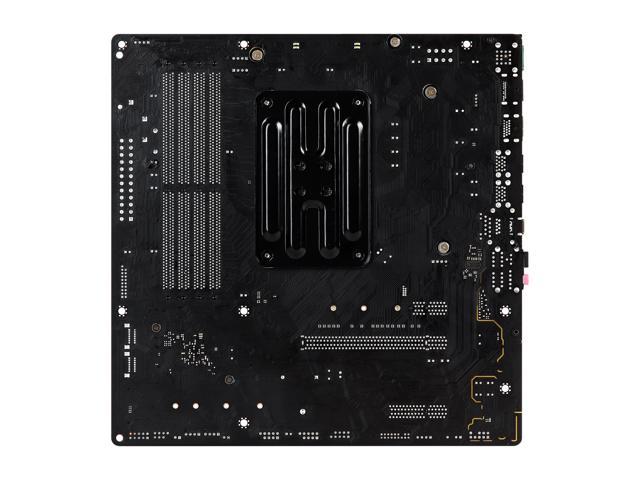 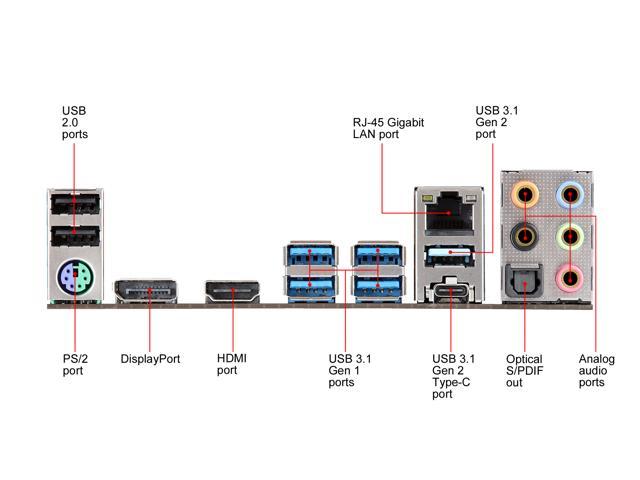 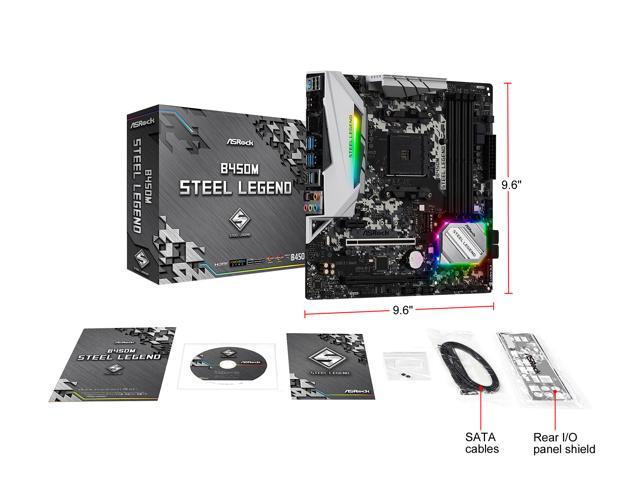 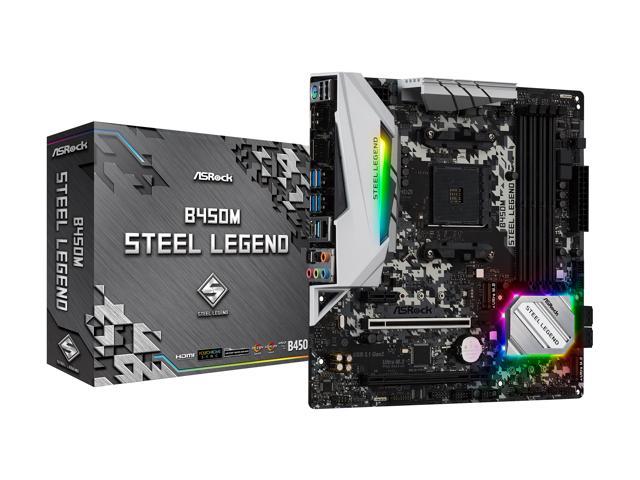 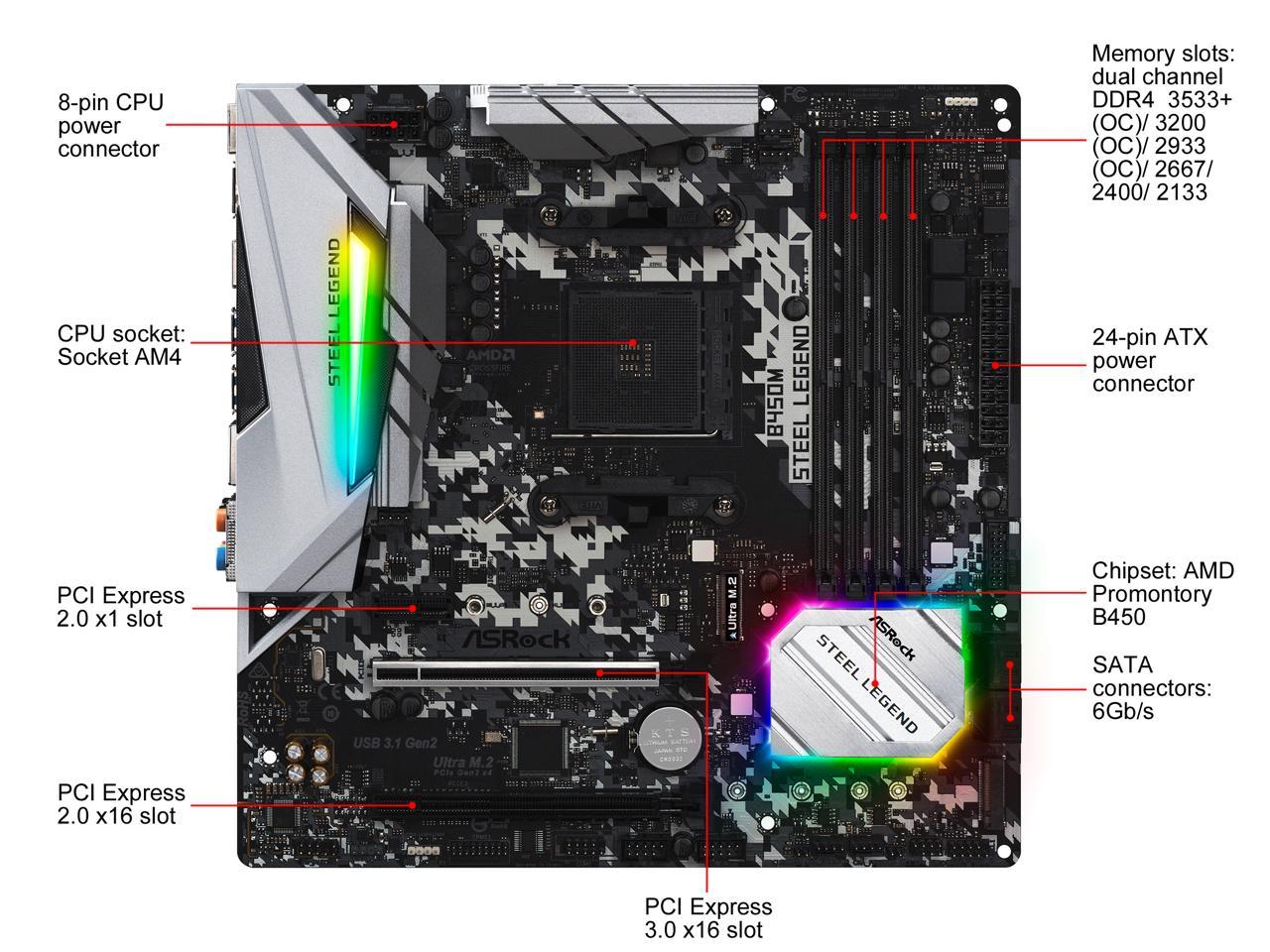 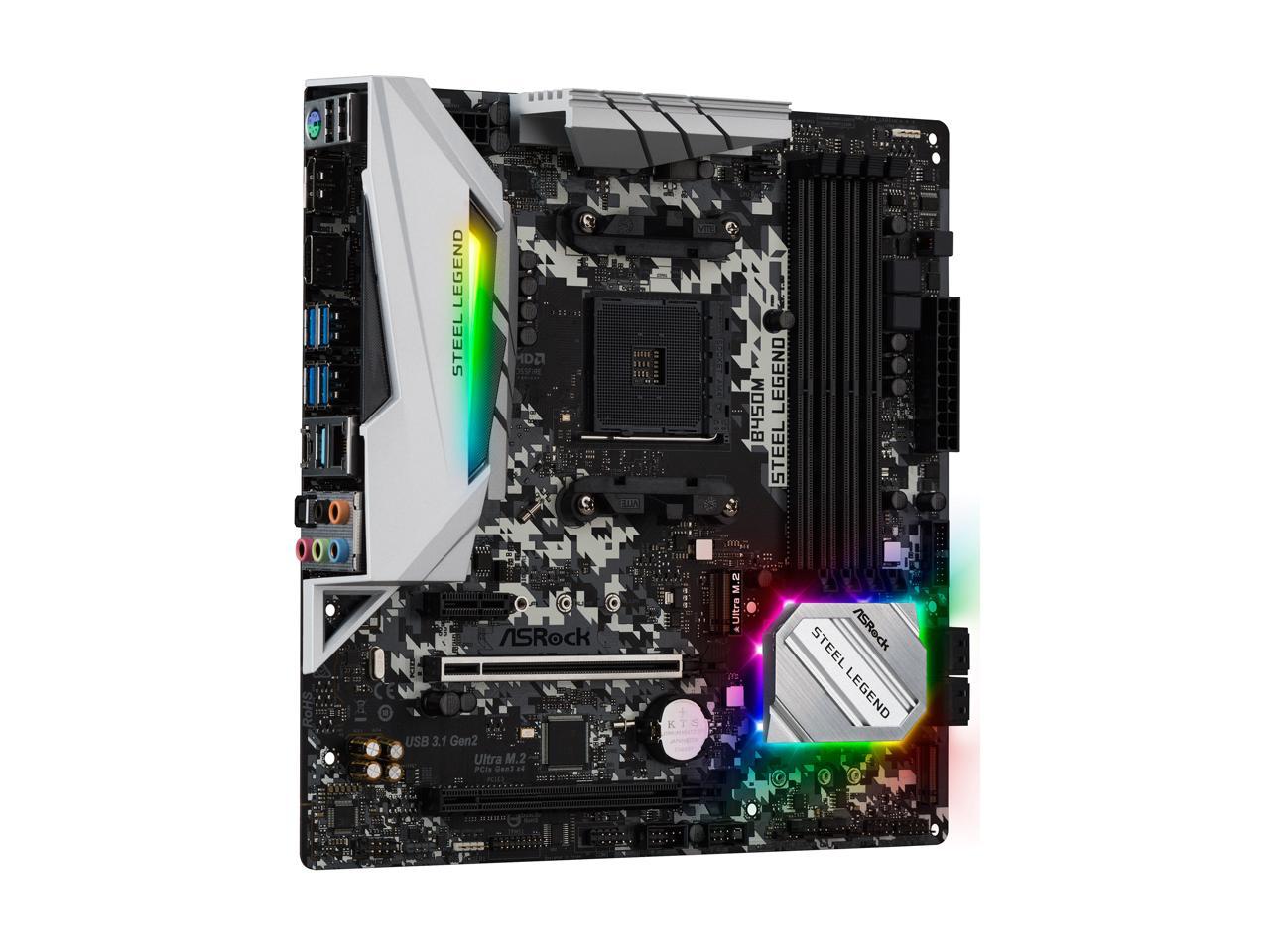 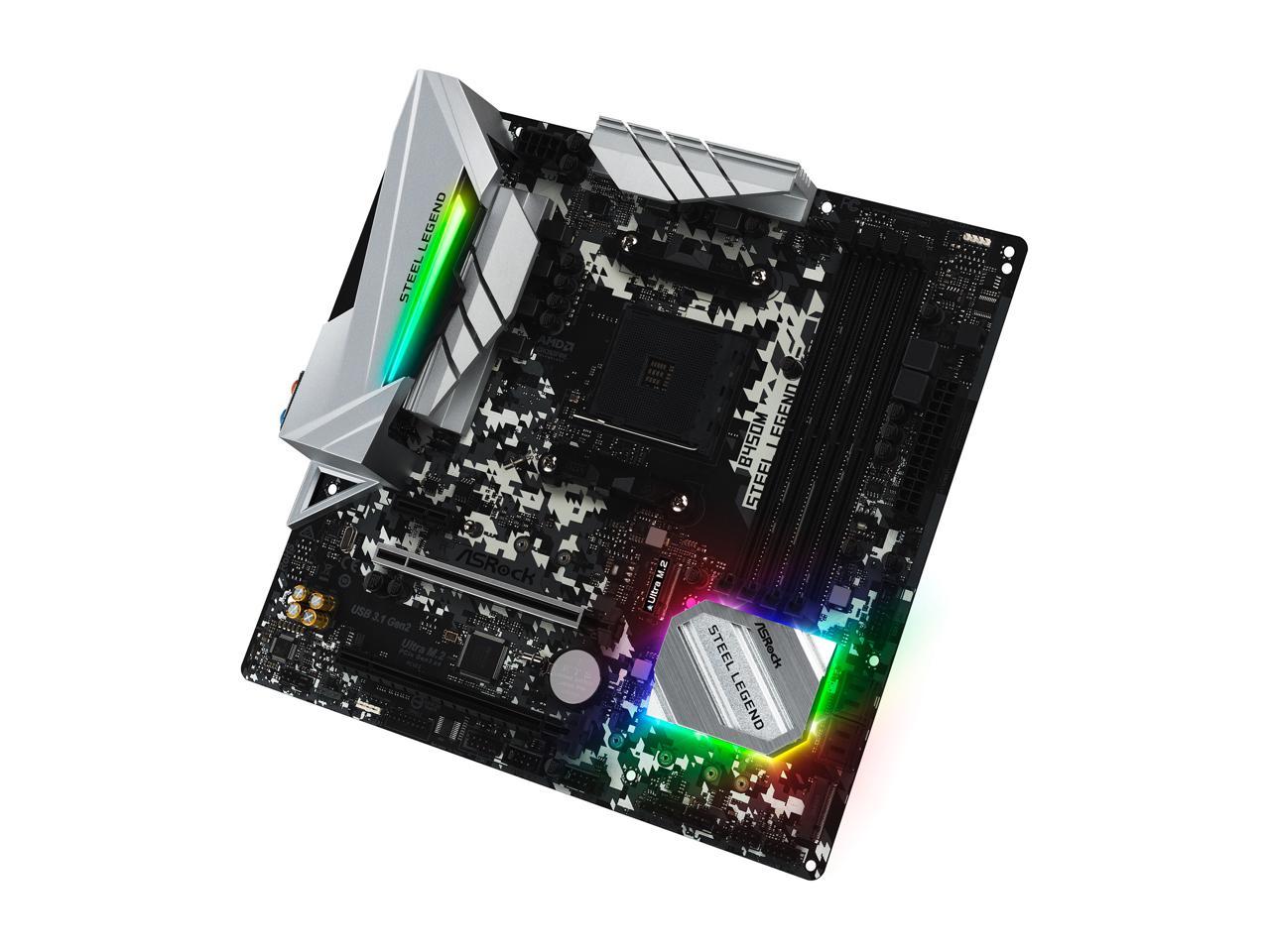 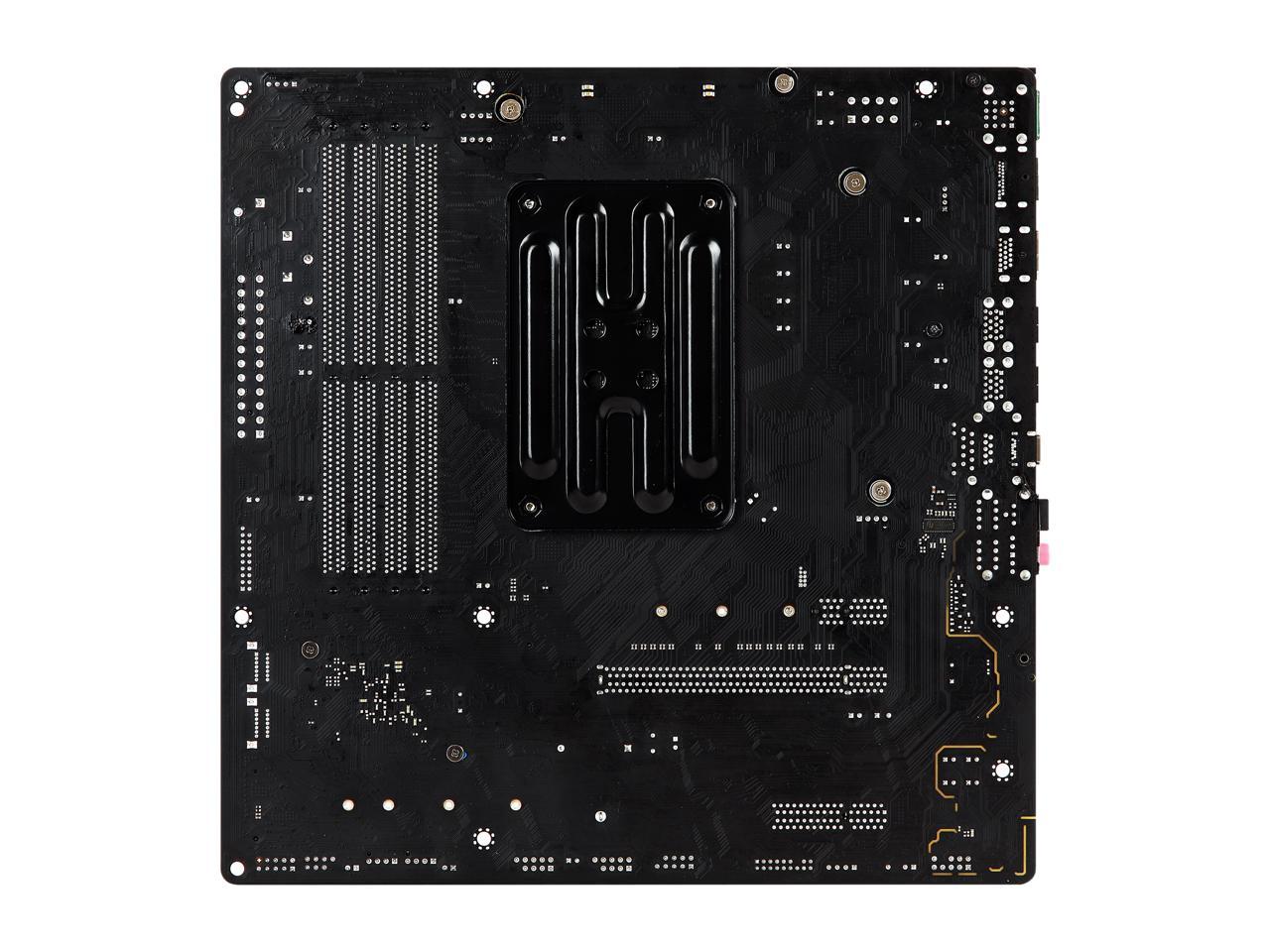 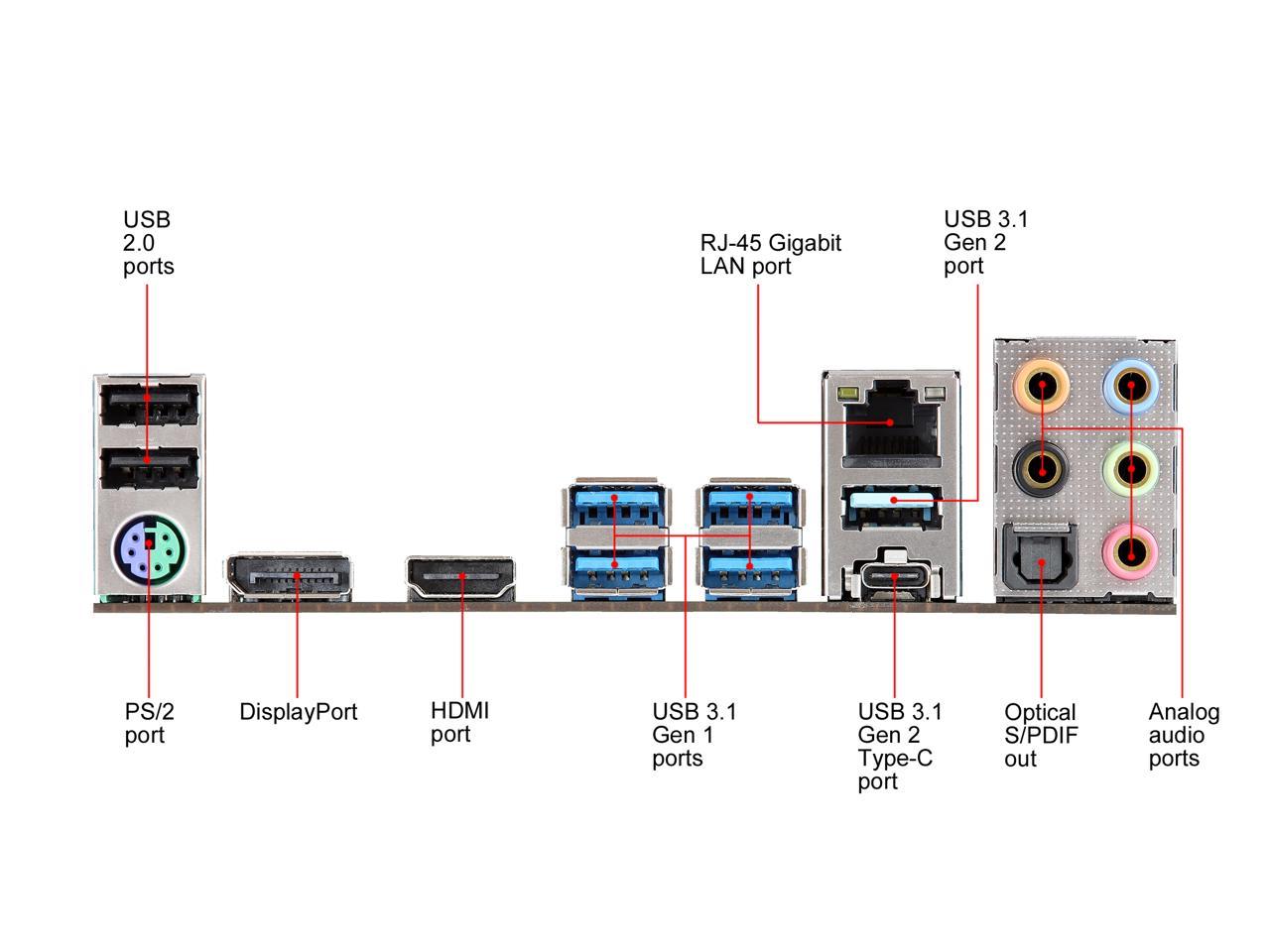 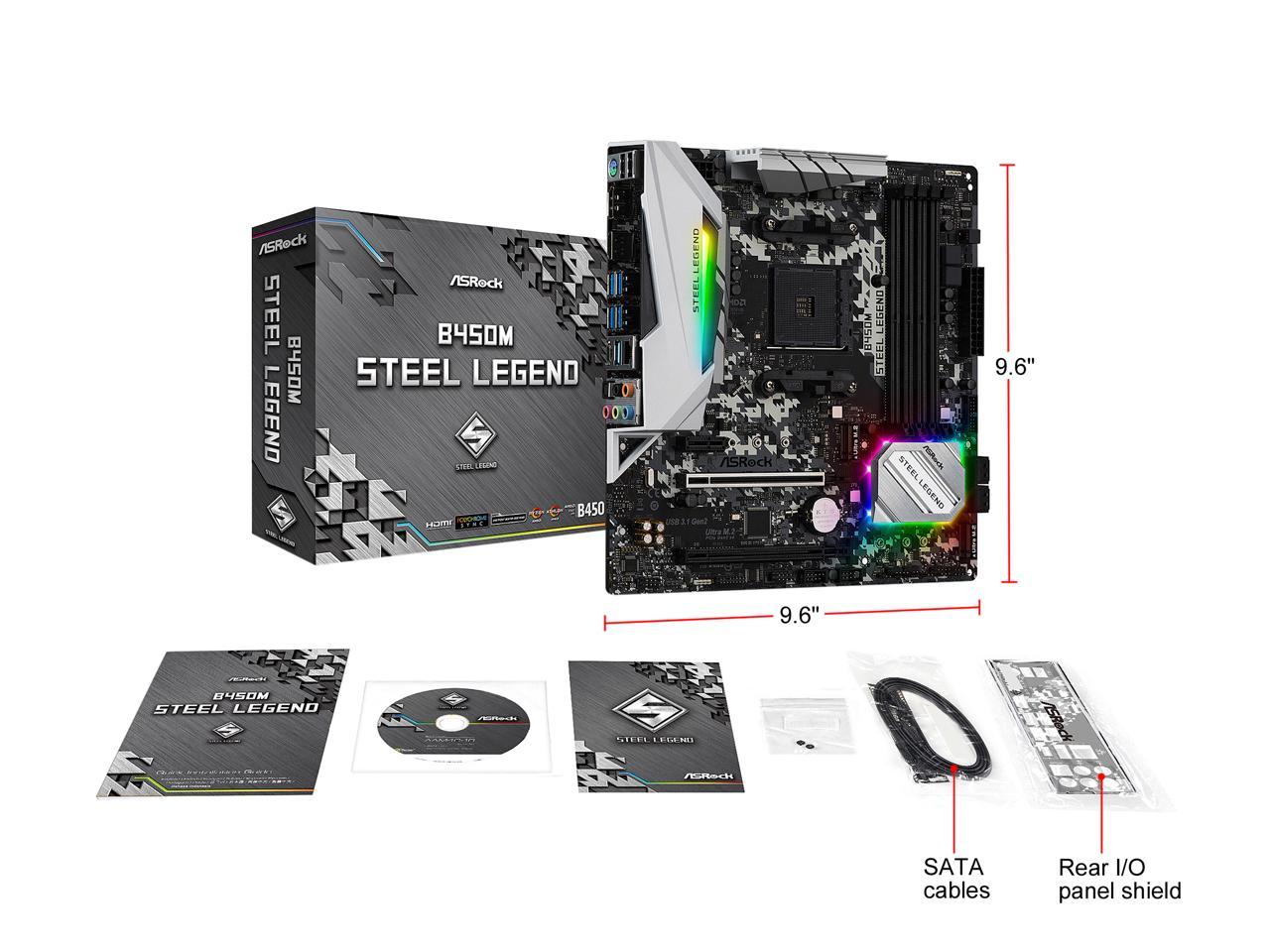 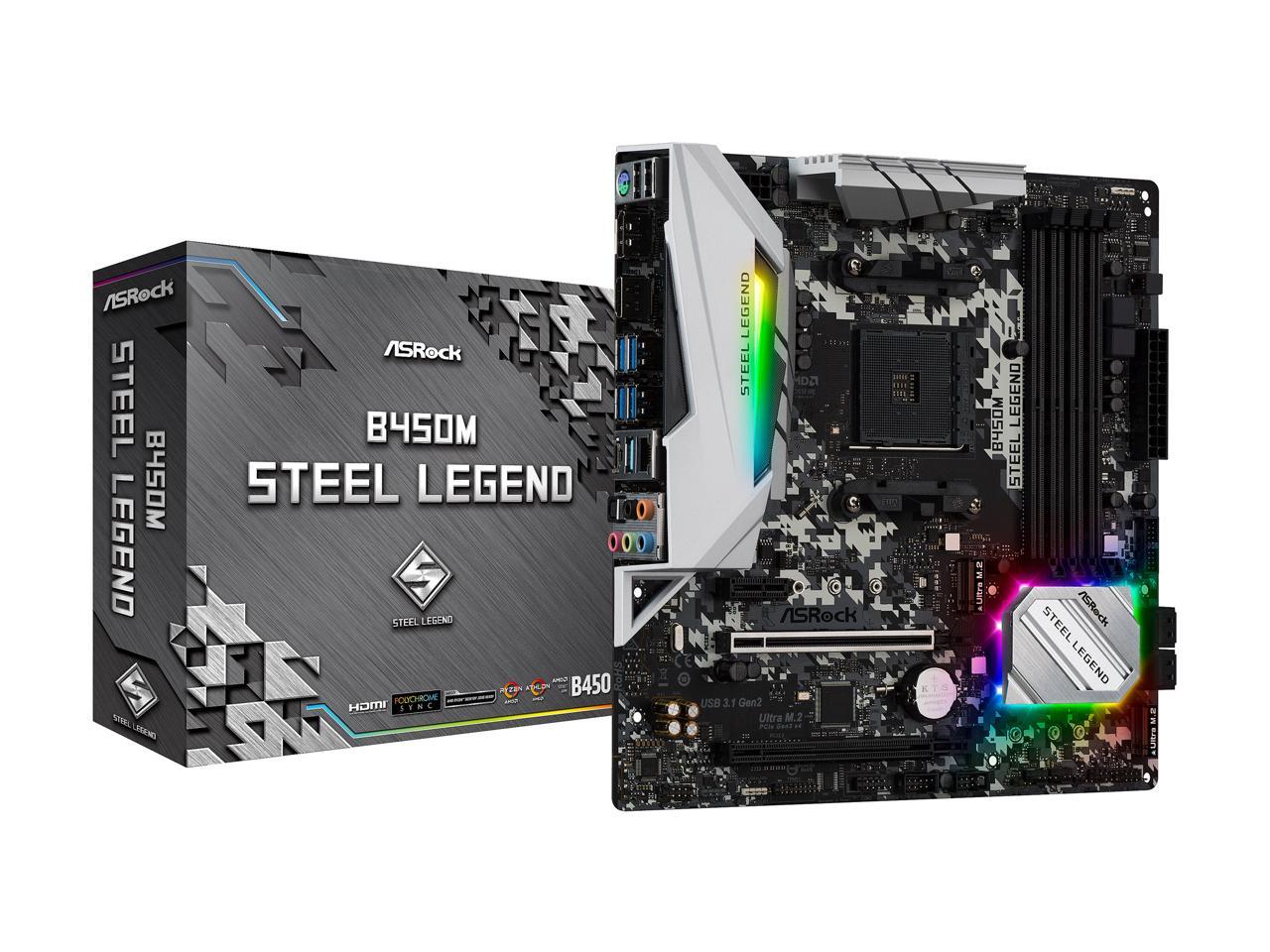 Powered by AMD B450 chipset, this motherboard flawlessly supports up to 3nd generation AMD Ryzen processors of up to 16 cores. This micro ATX board looks great, featuring a camouflage-themed PCB and aggressive-looking heatsinks. Its onboard LED lighting features full spectrum of RGB colors with various effects, and can synchronize with other devices that support ASRock Polychrome. With a micro ATX form factor, this B450M Steel Legend has quad DIMM slots supporting DDR4 3533+ (OC), two PCI-E x16 slots ready for AMD Quad CrossFireX, two M.2 slots, and two USB 3.1 Gen2 ports (rear Type-A + Type-C), so you have all the essentials needed to build your new powerhouse. Moreover, this board is constructed to be tough with Super Alloy components, Full Spike Protection, and a PCI-E x16 slot covered by steel plate for better strength and less EMI.

If you're looking for a solid, budget-friendly yet feature-rich foundation for your dream system, look no further than ASRock B450M Steel Legend.

Steel Legend represents the philosophical state of rock-solid durability and irresistible aesthetics. Built around most demanding specs and features, the Steel Legend series aims at daily users and mainstream enthusiasts! Providing a strong array of materials/components to ensure a stable and reliable performance. A motherboard that fulfills every task—with style!

Two of the world’s fastest M.2 slots. One delivers up to PCIe Gen3 x4 32Gb/s transfer speed, the other one supports SATA3 6Gb/s mode.

* Please refer to the product specification page for more detail.

This motherboard has a pair of onboard Type-A and Type-C USB 3.1 Gen2 ports built on the rear I/O for supporting next generation USB 3.1 Gen2 devices and to deliver up to 10 Gbps data transfer rates.

The advanced PCI-E Steel Slot packed with solid cover that prevents any signal interference with graphics cards. It also allows the heavy graphics cards to be well-installed in the PCI-E slot safely.

Extra large aluminum alloy heat sinks that effectively take away heat from the MOSFET and chipset so that your whole system may perform more stable.

Cons: I too experienced the issue that the first negative reviewer did, but it was not "DOA". You just need some troubleshooting. If you finish the build and power it on for the first time, but nothing will display and the rgb lights up on the motherboard, don't panic. You can try two things (i actually had to do both because i messed up an oc and had to reset the cmos after i got it turned on and setup) : unplug your machine and hold the power button for 20-30 seconds to clear out the ram, or just remove the battery from the mother board for 5 minutes (you may have to remove your gpu to get to it like i did). Also I'm not a HUGE fan of the camo style pattern on the mobo io. But that's just nitpicky. OH, ALSO for some reason i can't get a display cable into the motherboard display port. Not like it's an issue because my gpu has one. Despite the minor problems, I'm gonna 5 star it to counter the 1 star it got from a lack of troubleshooting.

Overall Review: If you can get this for the $90 I just bought it for on here, grab it. I took a huge risk buying it before it even had really any reviews, but I'm glad I did.

Pros: - Phasers. - Did a lot of research, this one had everything I was looking for other than a heat sink.

Cons: - Only reason I wasn't going to buy this was becuase it doesn't have the heat sink that it bigger brother has, but the bigger model wasn't available yet so I went with this one.

Pros: Came flashed with 3rd gen Ryzen support (there is a sticker that indicates this outside the box) RGB Four memory slots Optical audio

Cons: None yet. Just remember a video card if you get a non-G cpu. Oh, and wifi if you need it.

Overall Review: This board worked fine out of the box. It has the features I needed at a bargain price. Wifi would have been nice, but copper still performs better, so using a cable isn't an issue. The optical audio is great for those who can use it.

Overall Review: Booted up with Ryzen 3600 without a need for a bios update. Well thought-out board layout. Plenty of fan headers and USB ports. No reason to go with the full ATX version unless you really need extra PCIE expansion.

Cons: Led software is trash, the "static" color option doesn't even work correctly unless I use the bios to control it. QC must not be very good considering half the led headers were bent sideways. Not sure if they work as I don't use leds.

Overall Review: If you can spend more on a board, do it. Clearly asrock doesn't care about QC. 4 stars because I don't have a need/use for the led headers. Everything else worked fine.

Pros: Amazing cool looking board and lots of options that a lot of boards do not have. My biggest and most favorite is that it offers 2 M.2 slots! Plus heat sinks, 2x PCI slots, etc., and is super easy to work on.

Cons: The graphics are cool (white and gray), but the print on the board isn't the easiest to see when you are using a flashlight after it is installed to see what pins are for what.

Overall Review: I paired this board with an AMD Ryzen series 7 2700x, GeForce GTX 1060Ti, 16 gig corsair 3200 DDR4 Vengeance Pro RAM, EVGA 750 PS 80+ Gold, and a cooler master ML240R water cooled system! Long story short it is an amazing setup with this board. Plus its all tucked inside a Fractal Design Meshify C case!

Overall Review: It is worth noting that only one of the m.2 slots is an ultra slot. The other is just standard sata I believe, but again, you get two slots on a micro atx board! This review for ASRock review rebate program.

Pros: Looks great. UEFI ok. ultra nvme does not interfere with GPU Price well worth it.

Cons: -AsRock rebate process convoluted and time sensitive. Don't buy it with the rebate as a selling point. You probably won't get around to it and if you do it will take more time than its worth. -Limited RAM frequency support.

Overall Review: Love it. I can't think of a better B450 option price for quality. If you dont like RGB then just turn it off. Easy in bios.