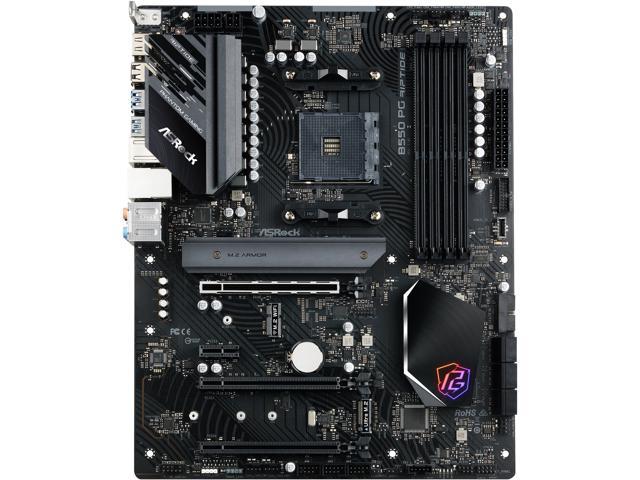 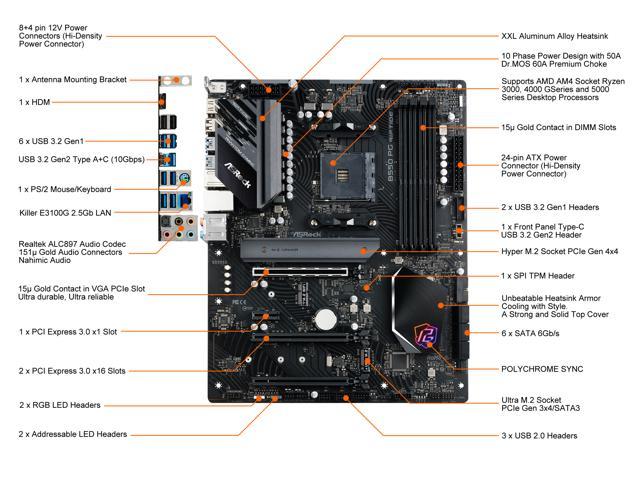 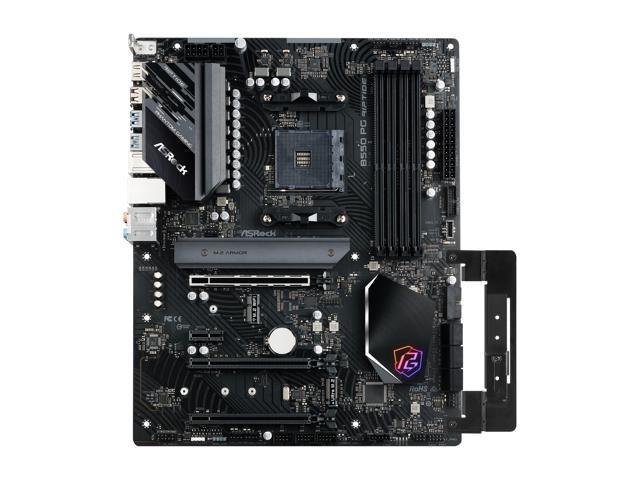 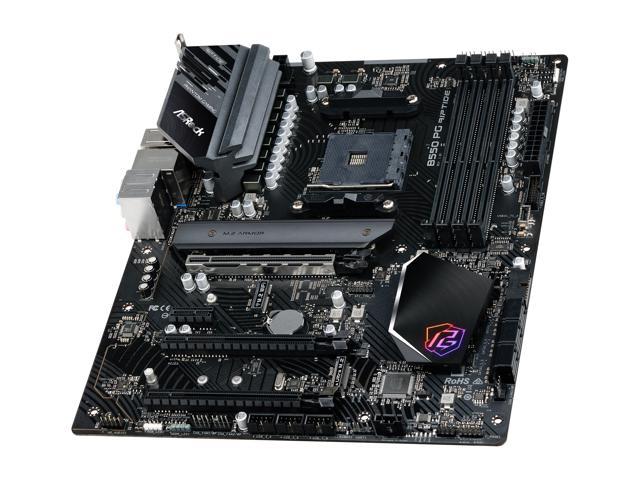 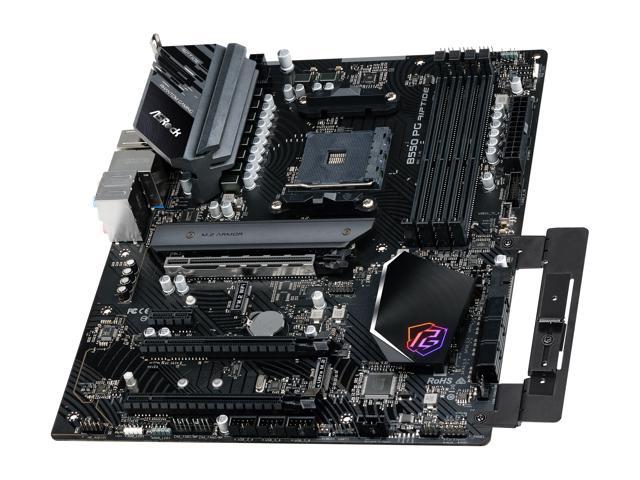 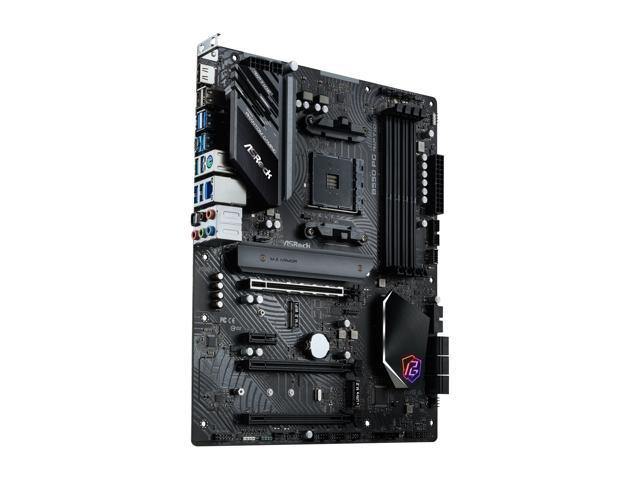 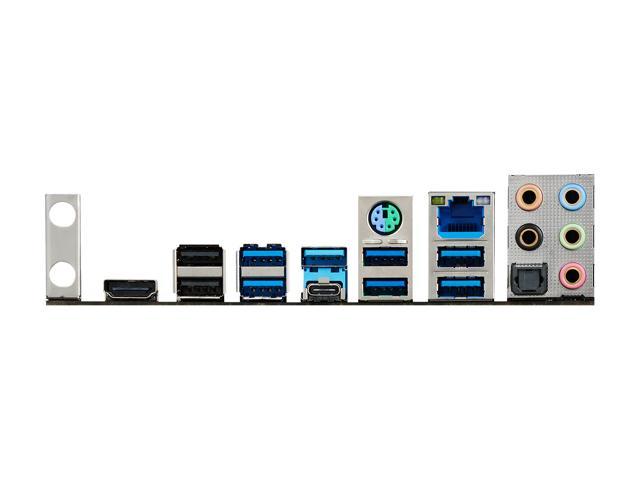 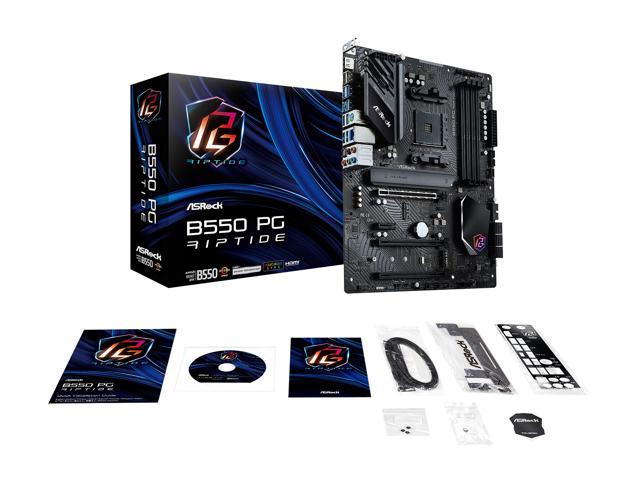 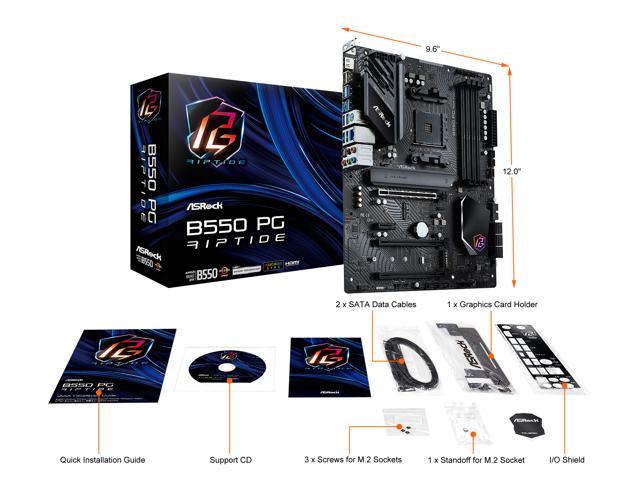 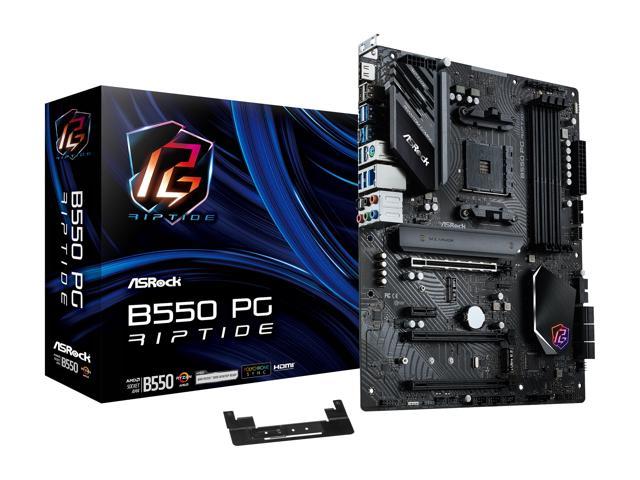 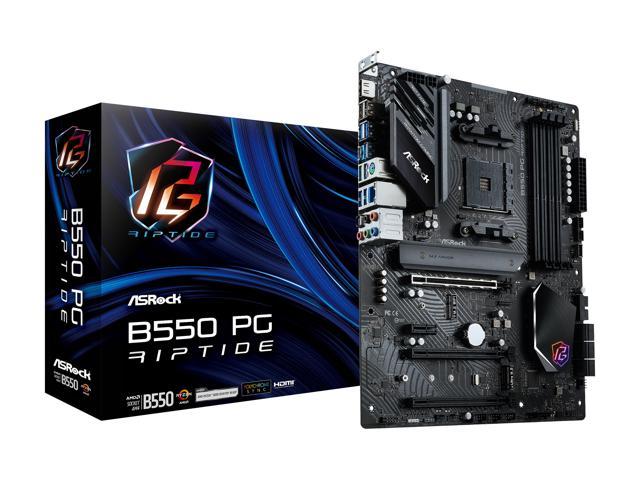 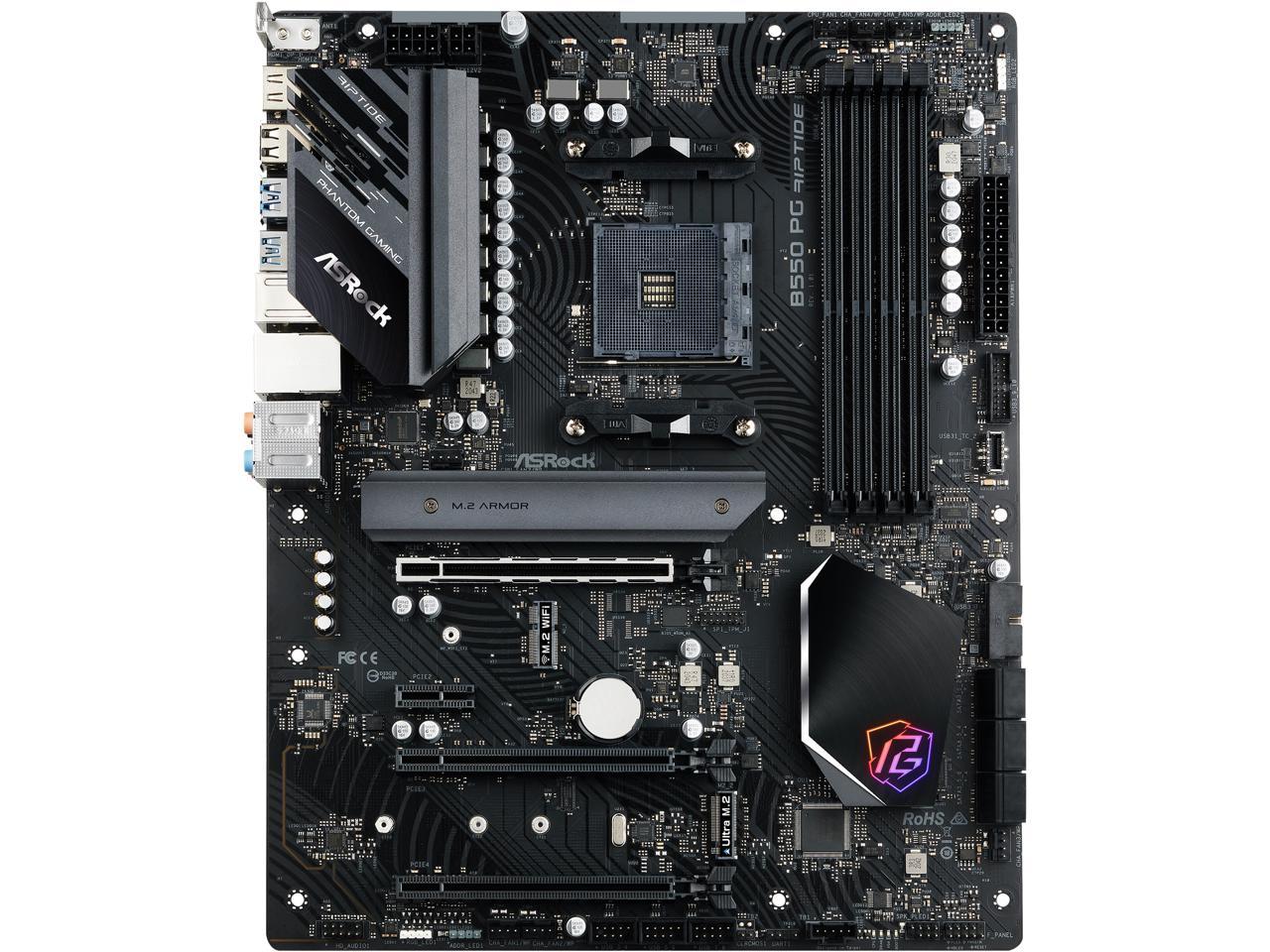 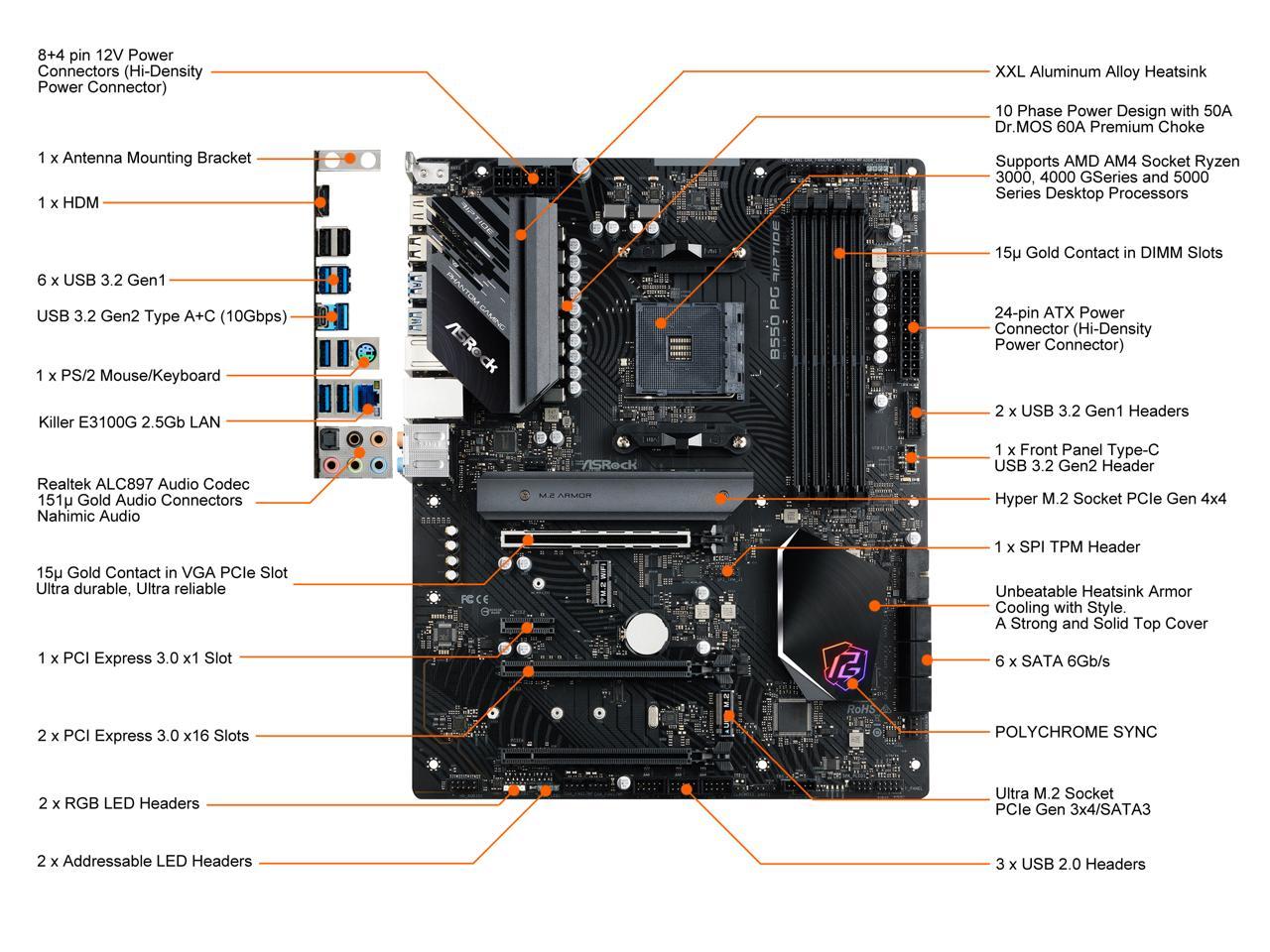 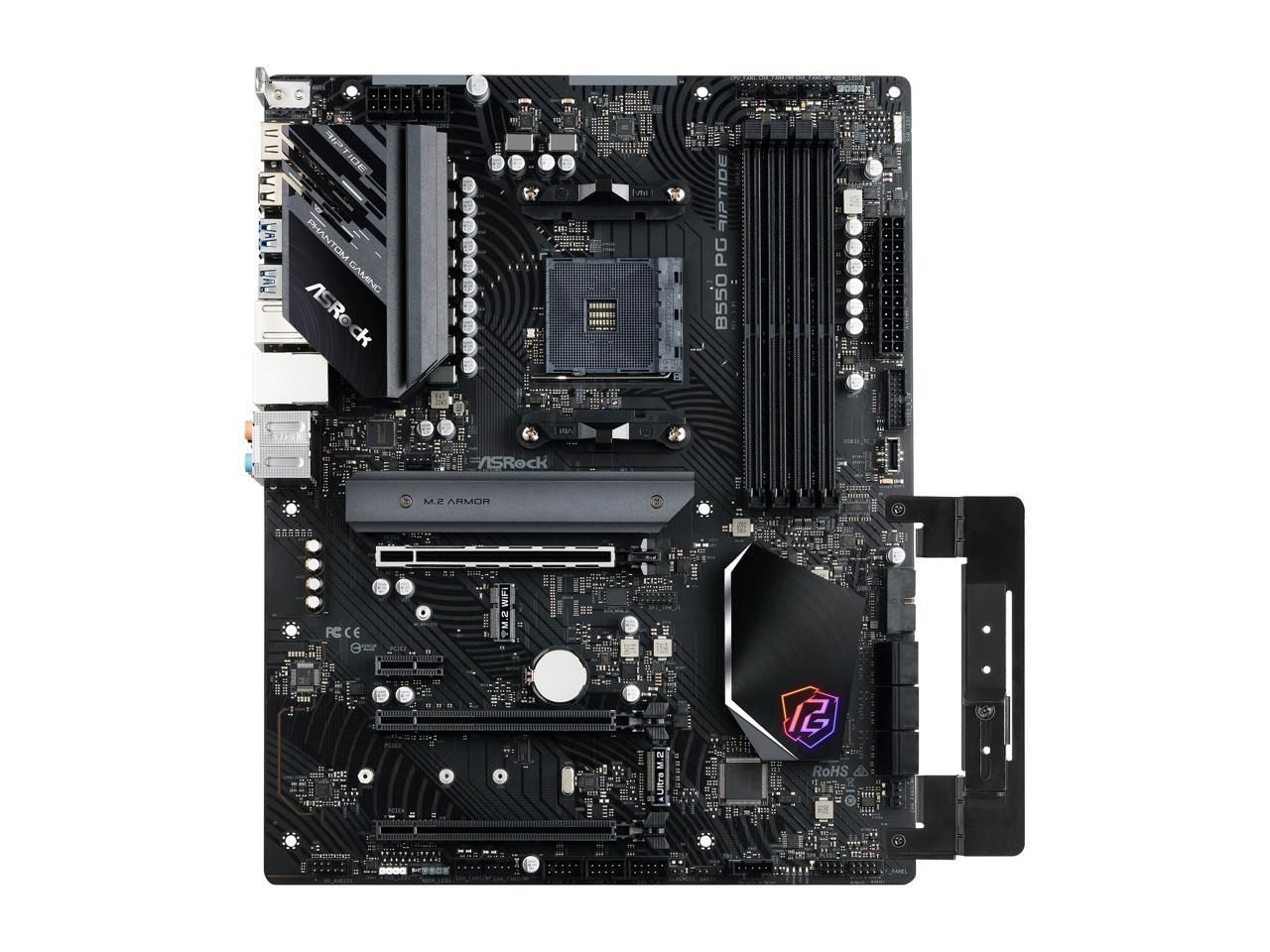 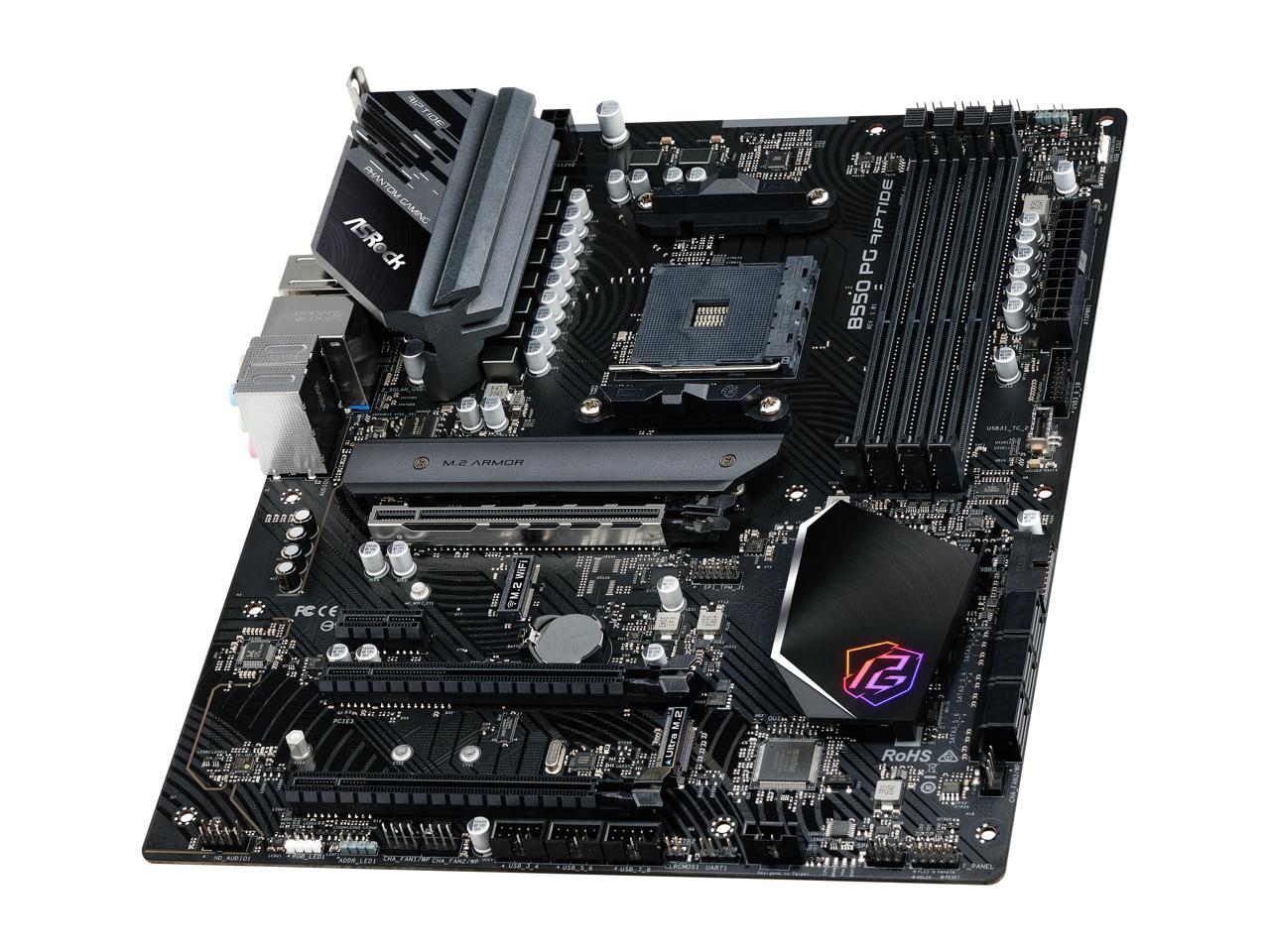 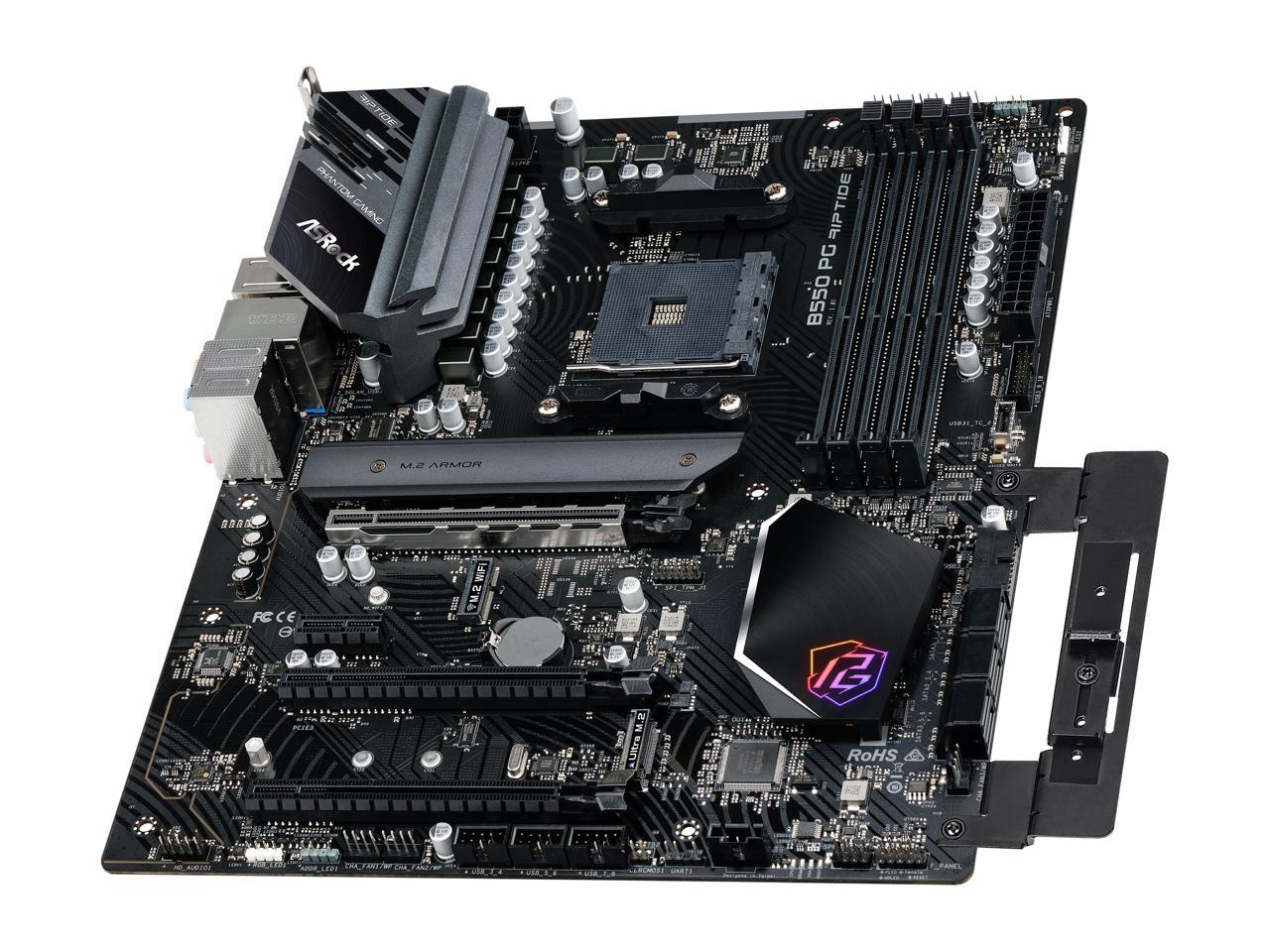 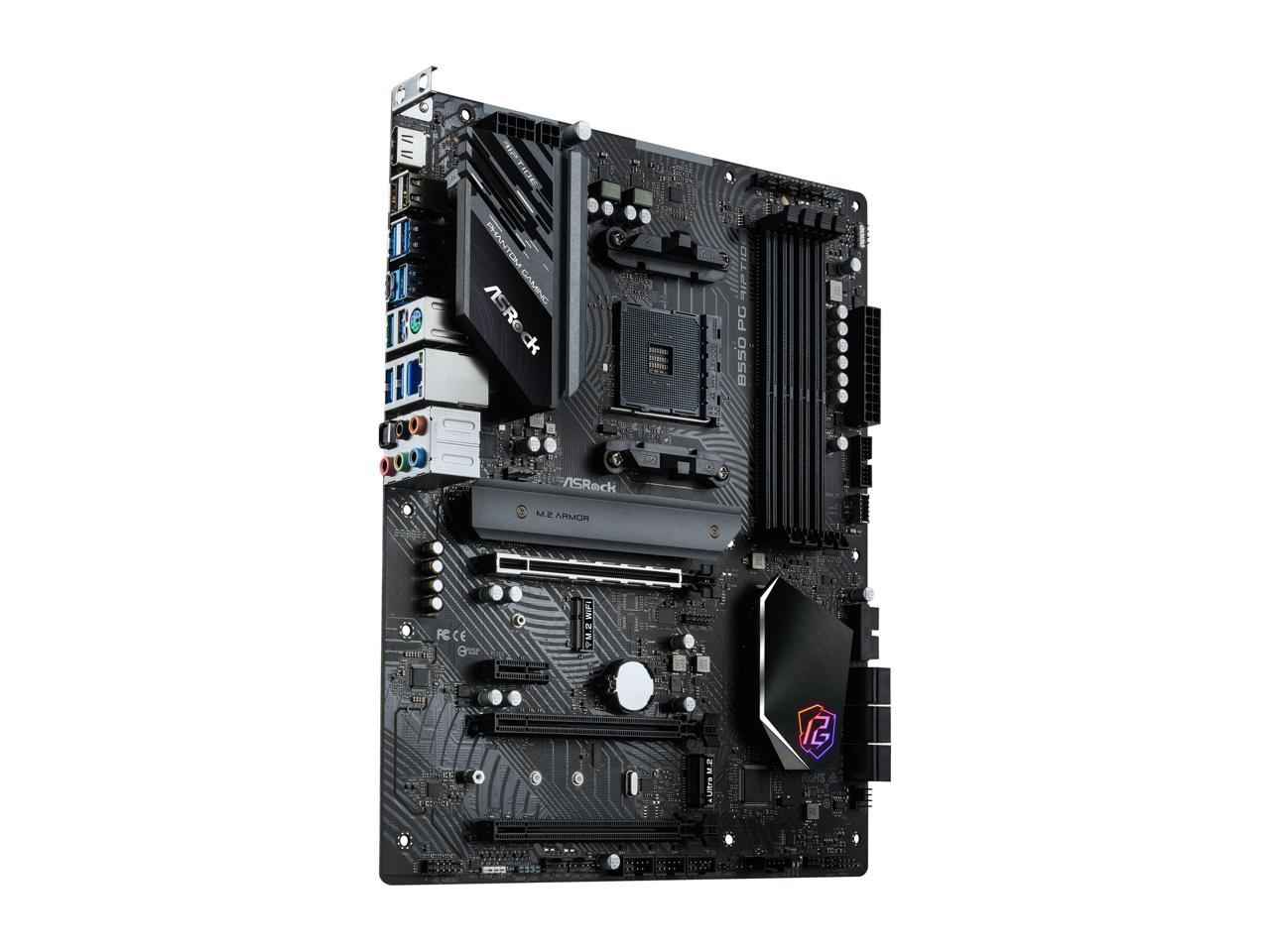 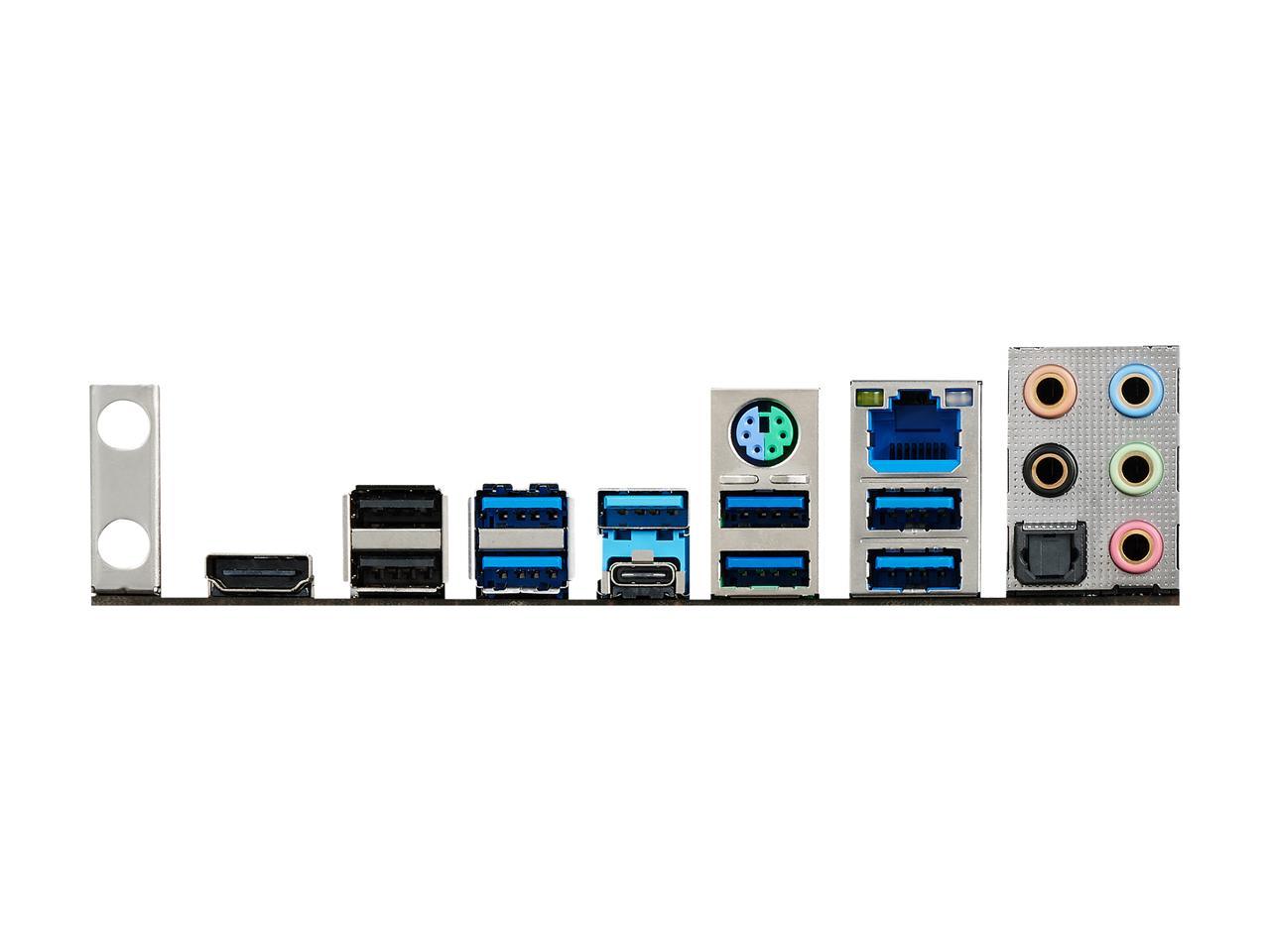 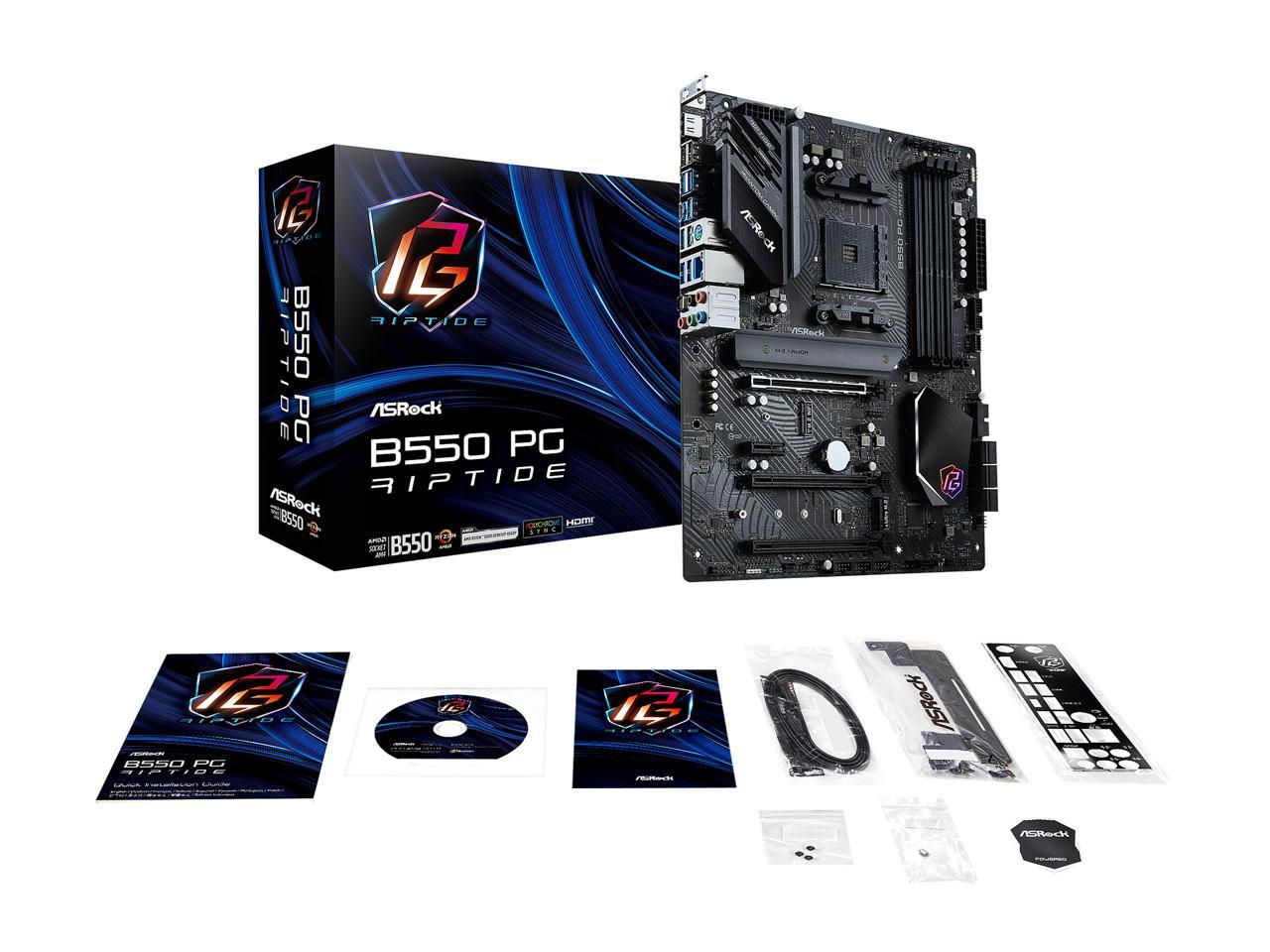 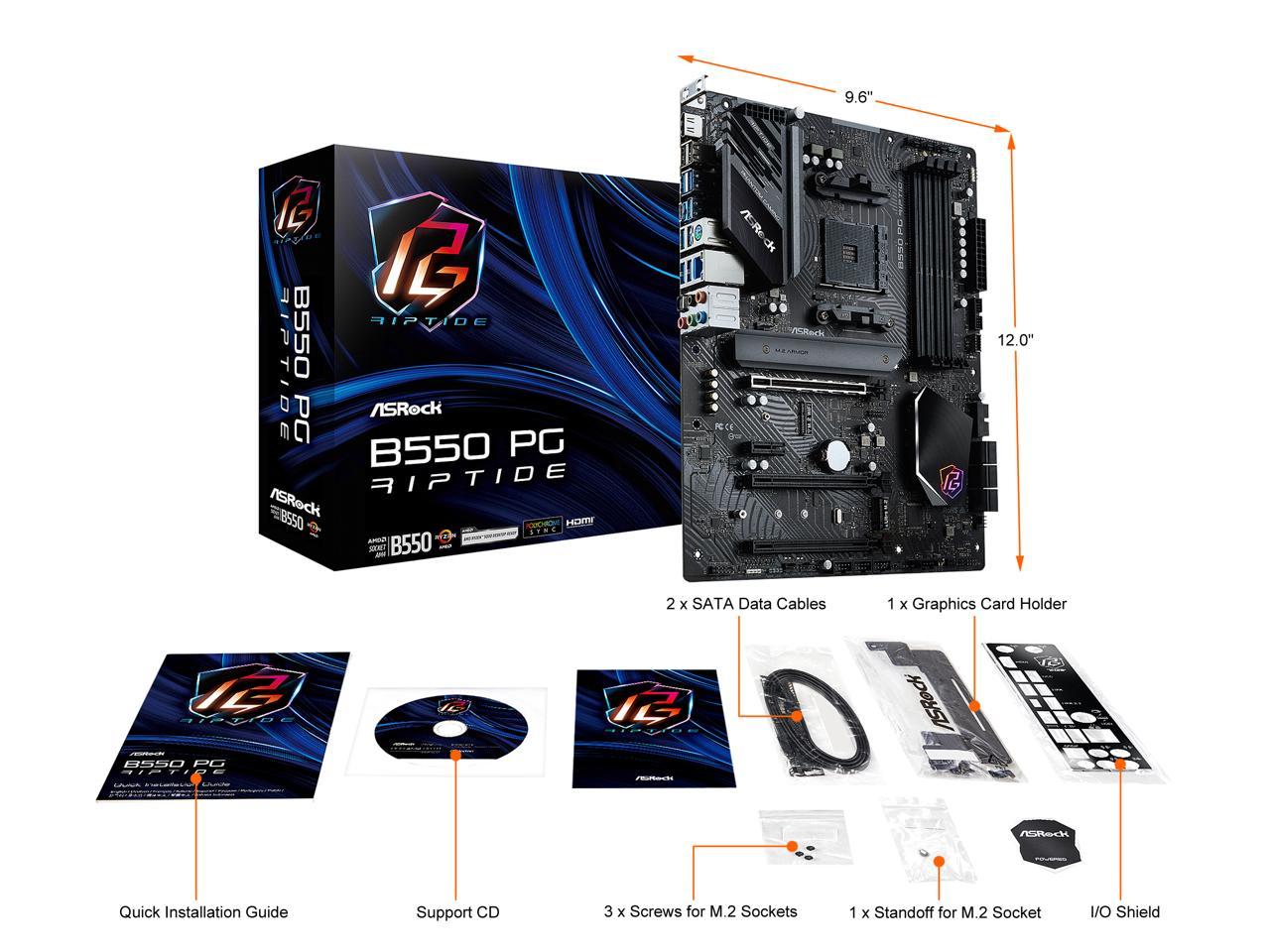 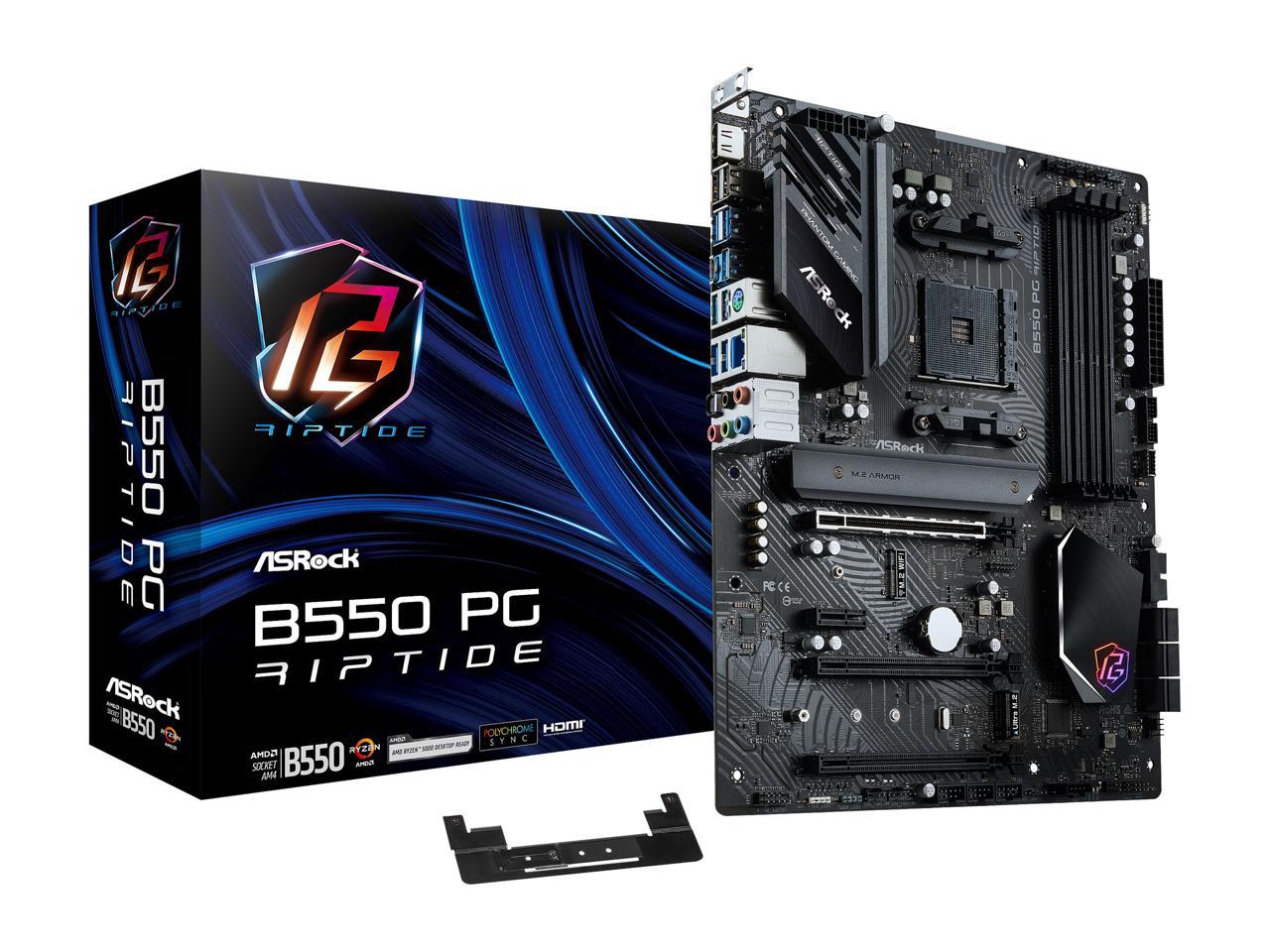 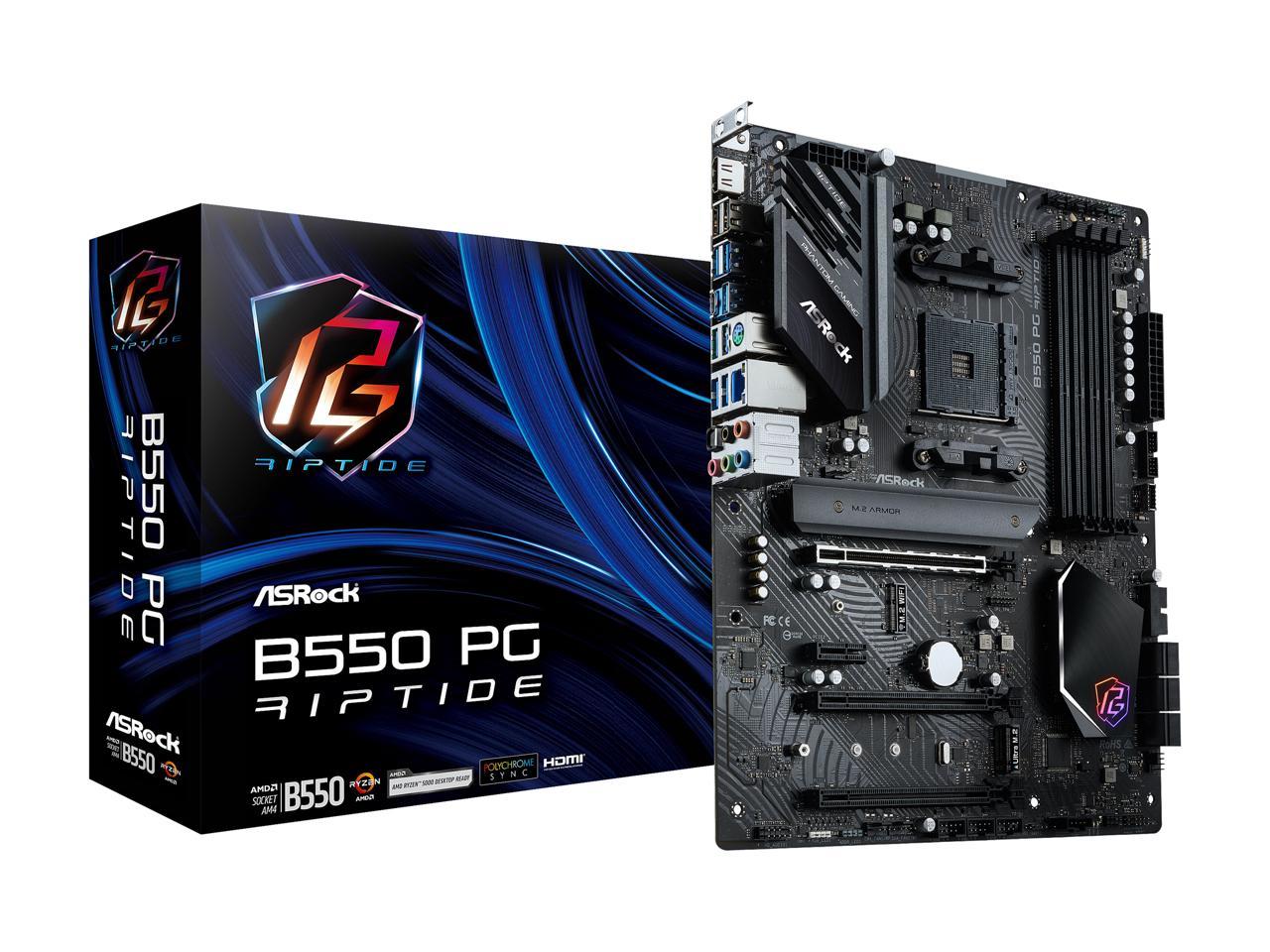 Learn more about the ASRock B550 PG RIPTIDE

Pros: Heavy Board it Brand New with the New Bios it comes with a V.C. Holder made of Steel and adjustable been wanting one for years. On Sale this is my 3d AS Rock board in 6 months all 3 Fired Wright up. Can;t say that with Gigabyte Boards. Sent a New 450 in DEAD 25 $$ to ship 4 Months later I get it DEAD there NO Excuse for that.

Cons: For the Price all Updated NO CON FANTASTIC 550 BOARD Now Lower the Price on the 5000 8c

Pros: None! It's horrible!

Overall Review: I purchased this MB because I trusted Neweggs recommendation of boards based on the Ryzen 7 5700x build I made. So let me break down the situation. I built the PC, activated Windows and registered my PC, everything was running smooth....THEN I started to do the Windows Updates for the drivers and out of nowhere the PC literally shut down and started back up on it's own (basically a restart), no warning, no nothing. As the PC booted back up, I waited because I figured it was just the updates doing their thing so I just went and made me a sandwich. 20-30 minutes later I come back, move my mouse because it's probably in sleep mode.... nothing. I shut down the PC, waited a few minutes and started back up... nothing. I open the case and realized the motherboard has 2 LEDs lighting up, 1 for RAM another for CPU. I removed one of the ram sticks, removed cooler, and CPU, then I reinstalled everything and readded thermal paste.... It turned on just fine and the lights lit up again except this time after a few seconds it went from CPU and RAM to BOOT. I then decided to try all other parts on my other PC. CPU worked fine, GPU worked fine, radiator worked fine, everything except the MB worked. So I ended up returning it for a refund because I don't need this headache, so I decided to buy a better quality board from Asus which cost just a few more dollars!

Manufacturer Response:
Dear Eduardo Alvarez, We sincerely apologize for any inconvenience this may have caused you. Please trouble shoot the mainboard whether the issue is resolved. • Unplug the ATX power. • Clear the CMOS (refer to user manual link : https://download.asrock.com/Manual/B550%20PG%20Riptide.pdf ) • Load the BIOS setting default. • Download and update the BIOS L1.42 link below. Link: https://www.asrock.com/mb/AMD/B550%20PG%20Riptide/index.us.asp#BIOS • Test with 1 x memory, switching another memory if it's same issue. • Test with another known good power supply to verify. If you have any technical or warranty inquiry in the future, please contact us at https://event.asrock.com/tsd.asp We will assist you shortly. Thank you ASRock Support Tech Support Email: https://event.asrock.com/tsd.asp
Chris O.
Ownership: 1 month to 1 year
Verified Owner
Works as intended10/19/2021 8:00:22 AM

Pros: Relatively inexpensive, the board has had no problems keeping my 5950x happy. The CPU will keep itself at 5GHz no problem and can use my 4.0 nvme drive with no issue. My 3080 has never had problems on this board either.

Cons: I do feel as if the memory has a harder time overclocking on this board compared to the x470 taichi ultimate I had before this board. If you are looking to have a good ram overclock experience, this may not be the board for you. I would do more research as this could be just my board particularly

Overall Review: Love the board just be sure to order a good WiFi module when you purchase it or you will find you need to tether your phone a few days to it before it arrives