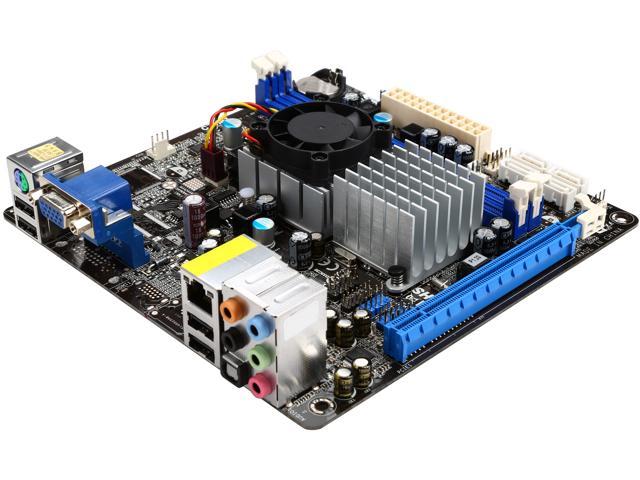 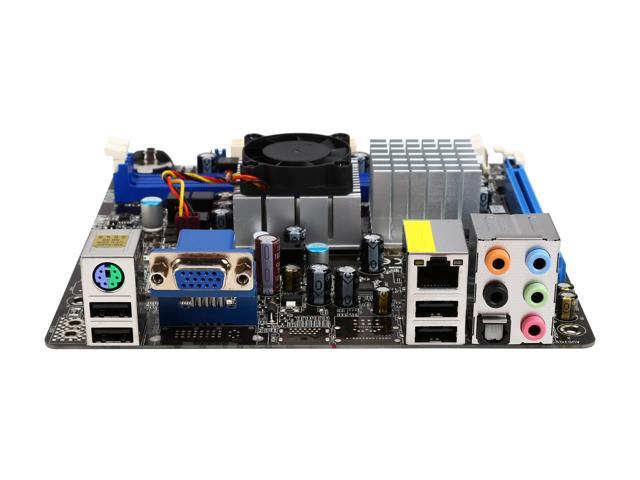 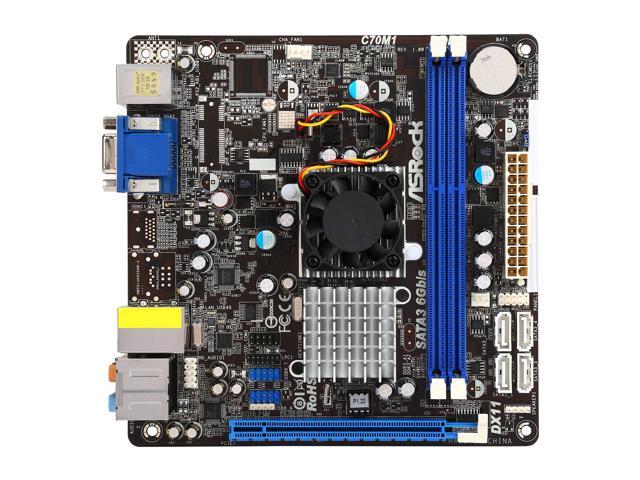 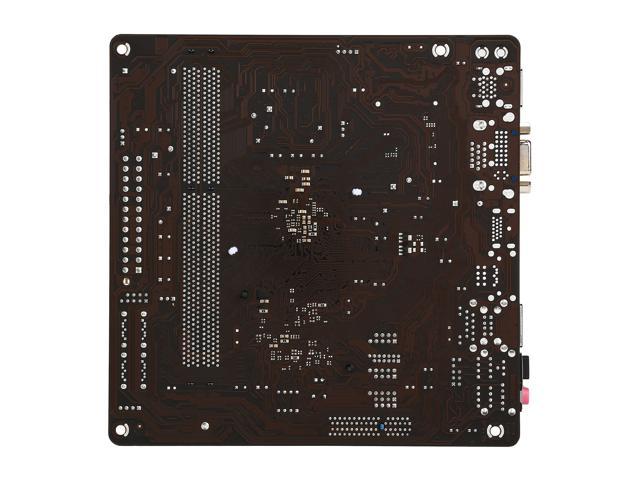 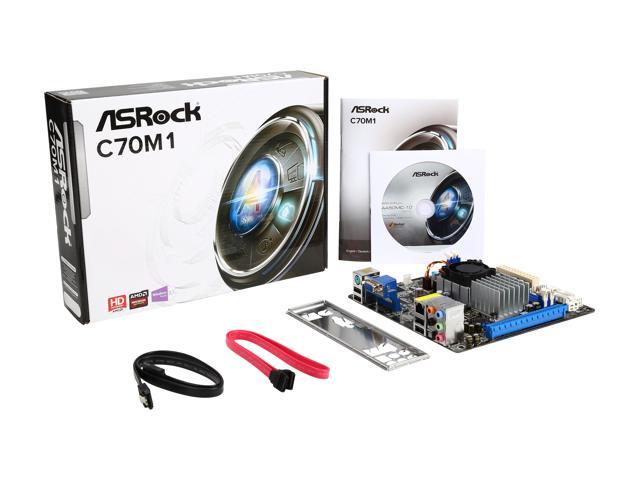 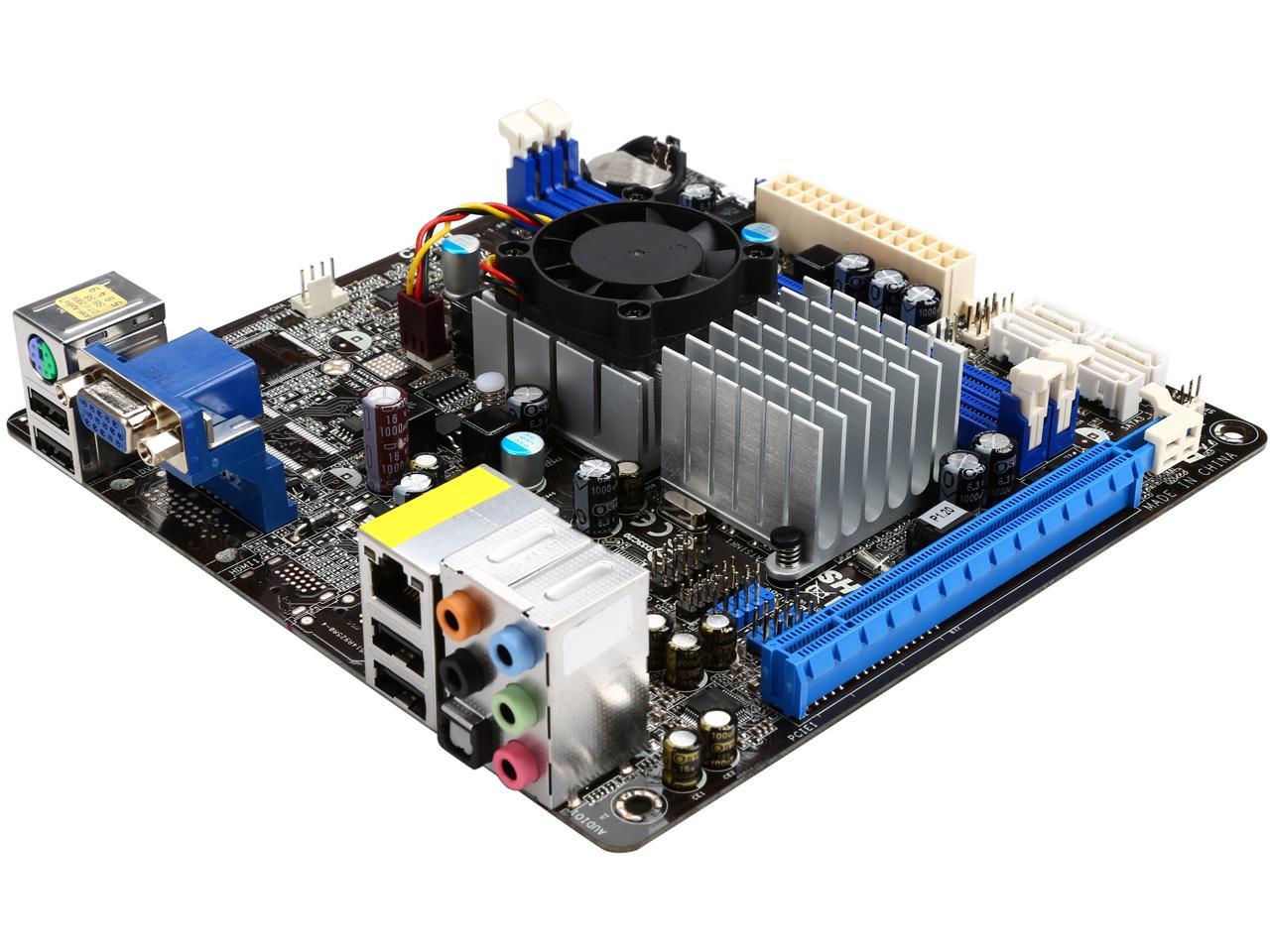 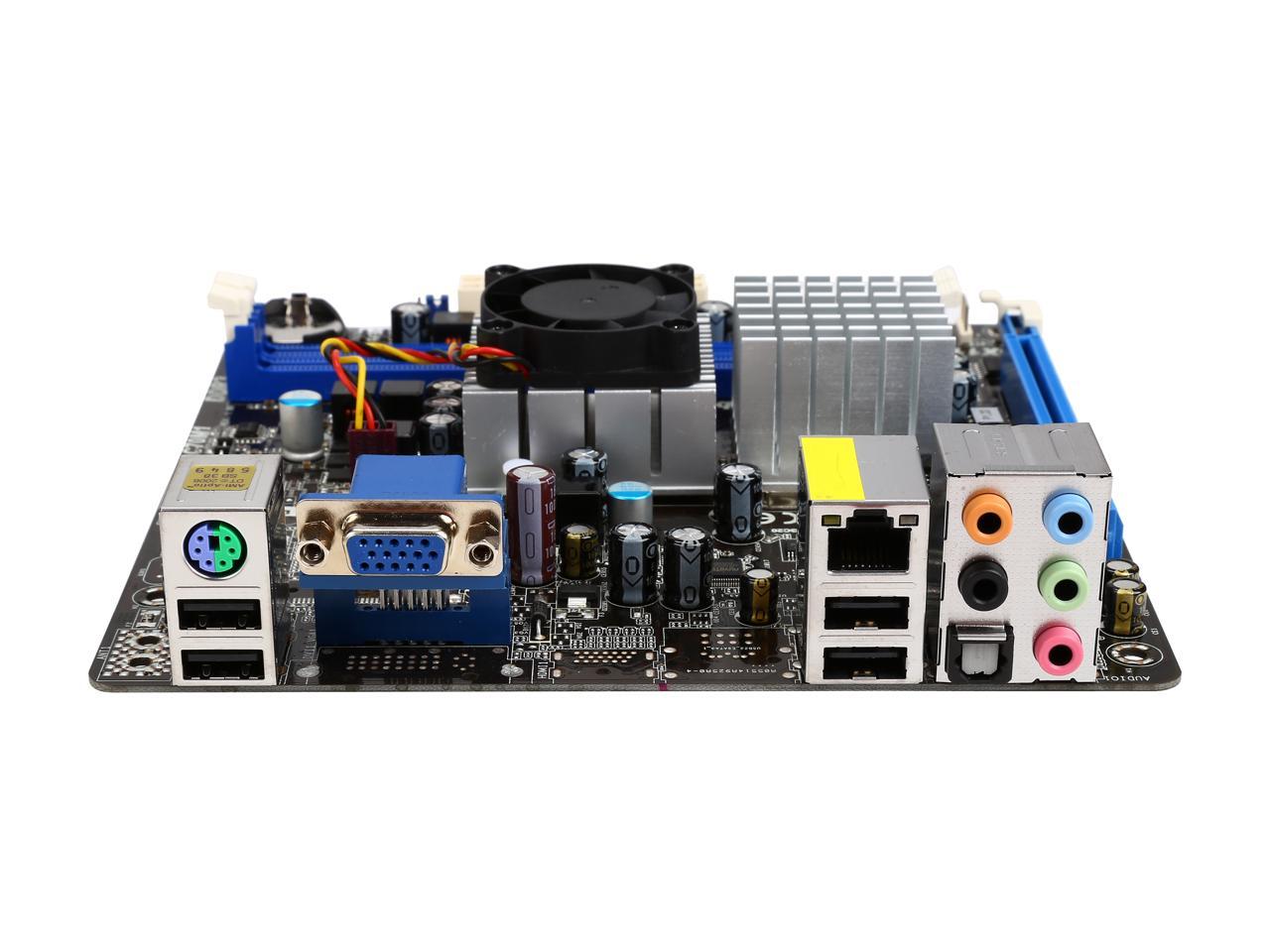 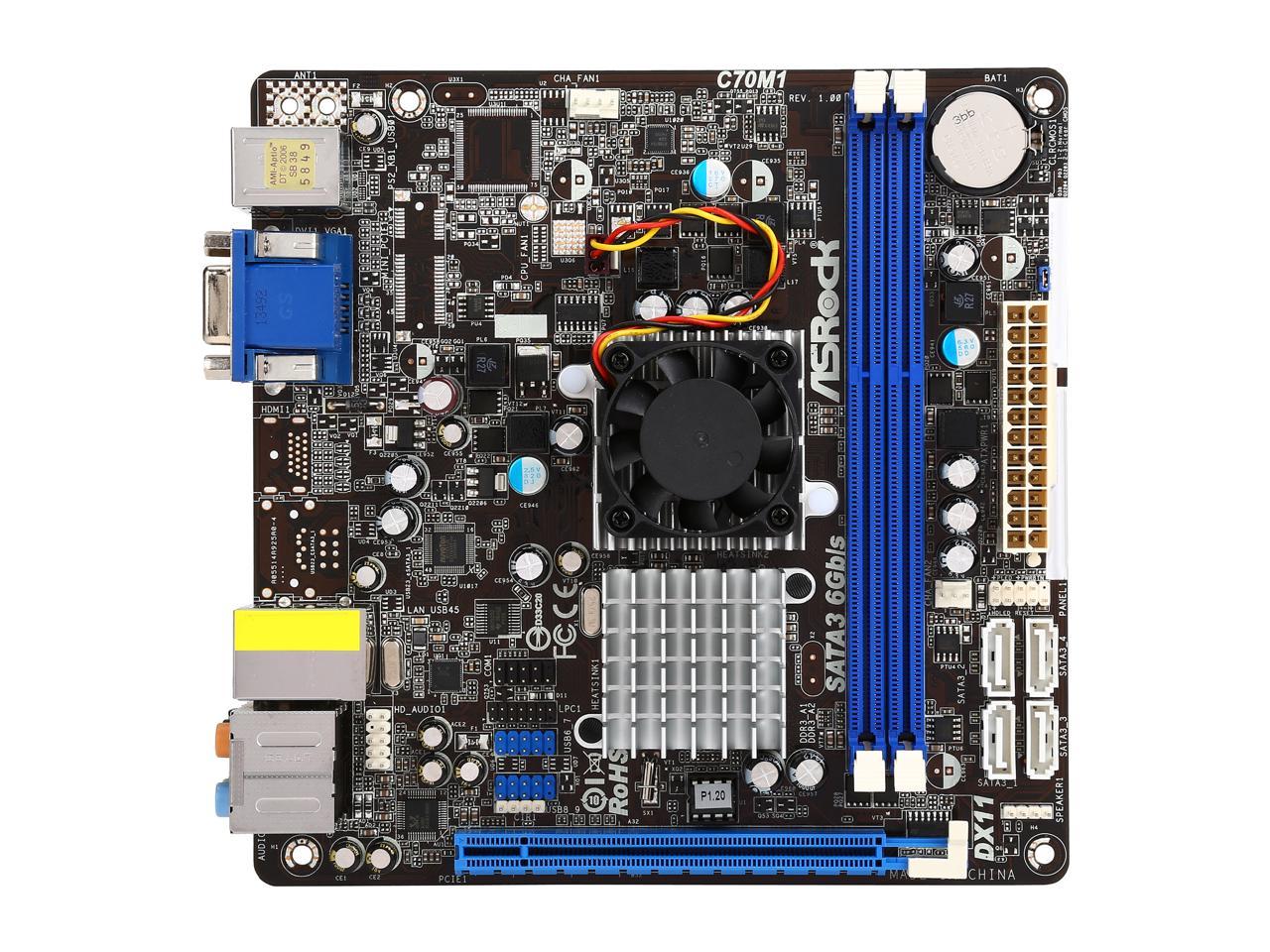 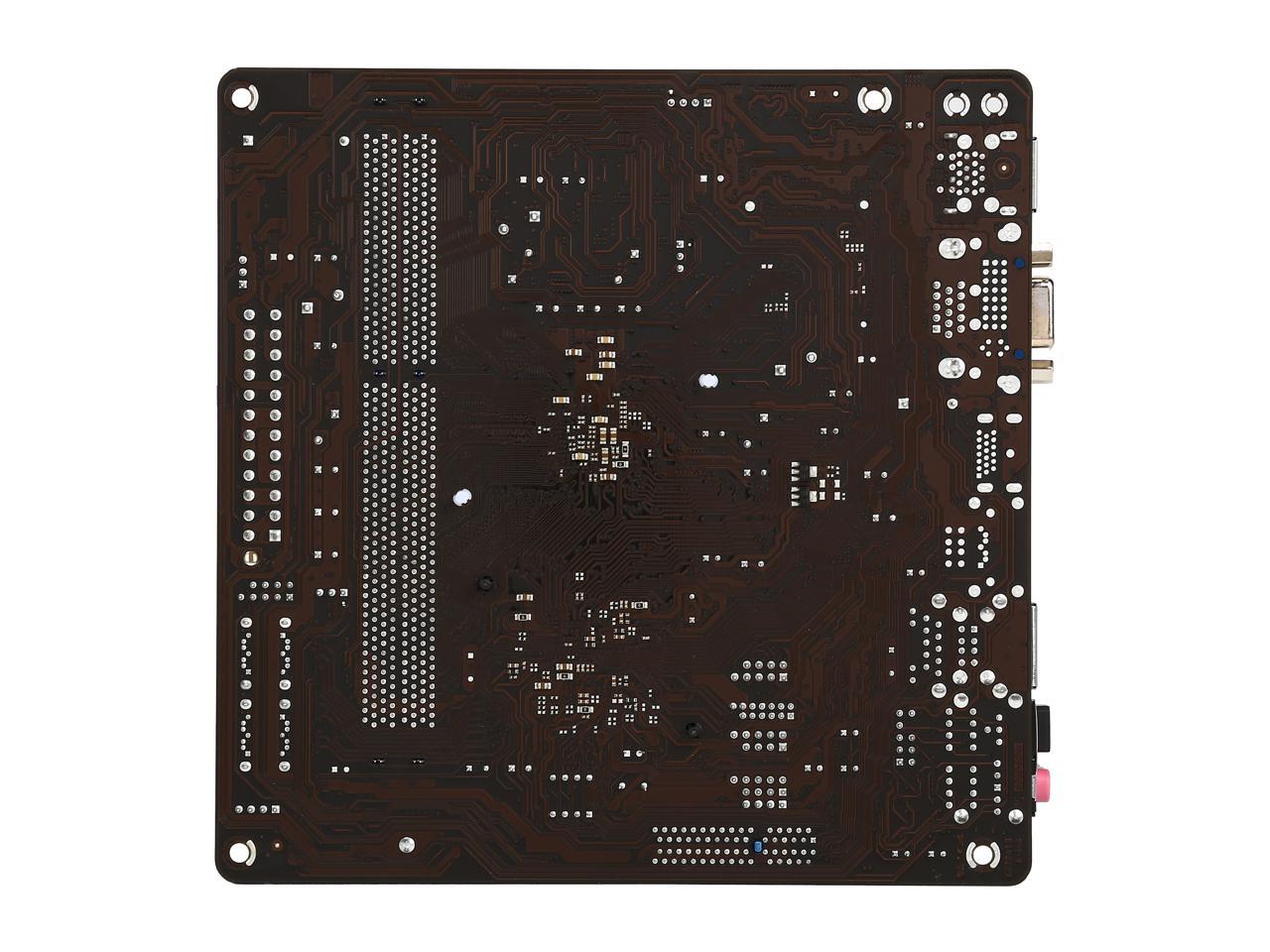 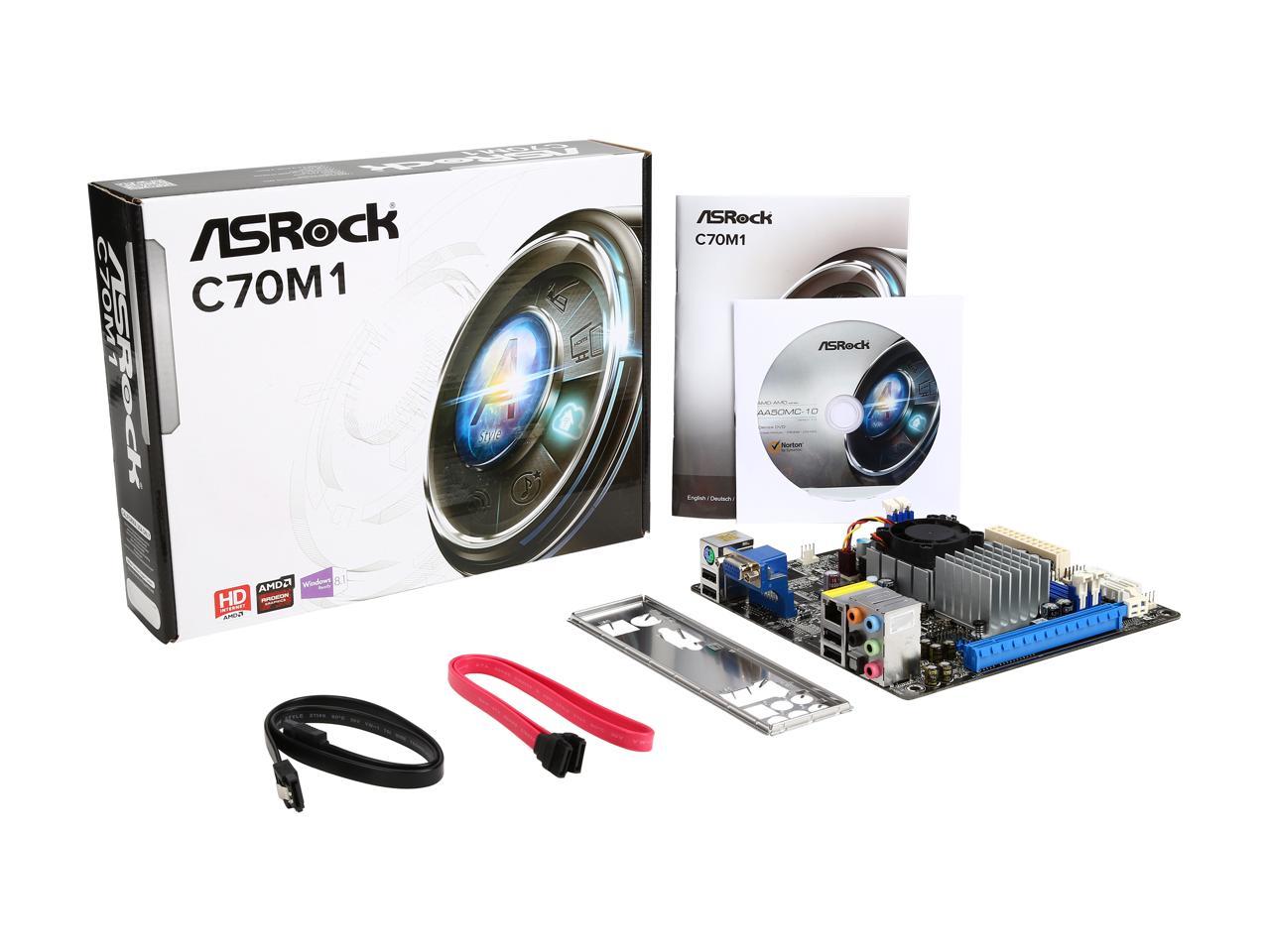 Learn more about the ASRock C70M1

Pros: Works as advertised. First booted from a USB stick with a linux image, no problem. 2nd connected a SATA hard drive that I had been using in another computer with linux mint installed. It also booted up with no problem and autodetected the built in video, ethernet, audio.

Cons: If I had it to do over, I might look for something a little faster. I tried playing with mplayer a video that I had recorded from a High Definition TV broadcast and ran top in a terminal window to see what the usage was. (top is an ancient unix command line utility for checking that kind of thing which has been inherited by linux. I'm showing my age probably by even knowing about it.) According to top, mplayer was using around 90% of the CPU. It used a lot less when playing a standard definition video. When playing the high def file, that, along with other processes added up to more than 100% CPU, but since this is a dual core machine, I reckon it could do that. I get the feeling that when browing a busy website, one with a lot of ads and stuff (this one, newegg, is a moderate offender in that regard), that it is sluggish, but that's kind of subjective.

Overall Review: At the same time I bought this, I bought a memory stick for it, The G.Skill Ripjaws Series 4GB 240-pin DDR3 SDRAM DDR3 1066 (the low enough spec one that you needn't bother to overclock.) I might get another such stick to boost my ram to 8 GB in the future and see if that makes a difference. Since I bought this partly because it's low power, I might someday try connecting a wattmeter just to see how much power my whole setup (motherboard, power supply, disc drive, USB TV stick) is using.

Pros: This little board and CPU combo are great for low-power applications. I'm running this and a couple of HDD's with 4GB of RAM as a file server with Ubuntu 14.04. I have it all powered by a 180 watt Flex-ATX PSU, but I imagine you could go with an even smaller PSU if needed. The system doesn't get hot, sips power, and is barely audible.

Cons: None for my application.

Overall Review: I love this little board since it does what I need it to. I can't speak to how this would operate as a desktop system, but with it being dual-core and decent enough GPU built in, adding in an SSD and at least 4GB of RAM and I bet it'd be a great little system.

Cons: no cons. write enough to fill in this waste of space.

Overall Review: this is a waste of space

Cons: I see no cons - as long as I do not expect too much from it. This is NOT a gaming machine. Only USB2 ports; no USB3.

Overall Review: Yes, I would recommend this machine to anyone wanting a big step up from a PI or similar machine. IMHO, this is a good little board for NAS or basic web machine. It might also be a good first build machine for someone wanting to try building a computer for the first time. Something to note: When installing Linux, I noticed a perceptible increase in performance when using the AMD distro version. I had 32bit x86 Debian Jessie NetInstall on a flash drive and tried that first. Install was a little slower than expected and overall response was not promising. Decided to try the 64bit AMD Debian Jessie NetInstall; install and overall operation was definitely better. So... If you are installing Linux, be certain to use and AMD installation. Also, note that after Linux is running on this machine, you will need to download and install the realtek and radeon drivers for best performance.

Cons: CPU is woefully under underpowered at 1 GHZ.

Overall Review: The board has great potential, and recommend over a PI. You just need the right software.

Pros: Fast, Powerful, Cool Running. I am using this Motherboard as a FreeBSD machine running PFSense. Works like a CHAMPION. ALL AMD processors are 64 Bit, so you can run 64 bit or 32 bit Windows, Linux, Unix flavors. I LOVE ASRock boards with AMD processors. This Motherboard sips power and runs VERY Cool.

Overall Review: Intel is 3X the cost with much less computing power. About all that's available in Intel is Celeron, and that's OLD TECHNOLOGY. All AMD is 64 bit unlike Intel's comparable products which are all 32 bit. You choose, but I say ASRock AMD motherboards are the smart choice, and they are a much better bargain than Intel.

Cons: This motherboard is consuming 24 watts when idle. My other setup with Asrock AM1H-ITX + AMD quad core 5350 with same SSD, same gold 80 plus power supply and same kernel configuration is 16 watts when Idle. I tried all power modes tried freebsd, rhel, ubuntu but same results. So don't know what this 9 watt claim is. Also the AM1H-ITX comes with all solid capacitors this m/b doesn't. I am returning these in favor of AM1H-ITX.