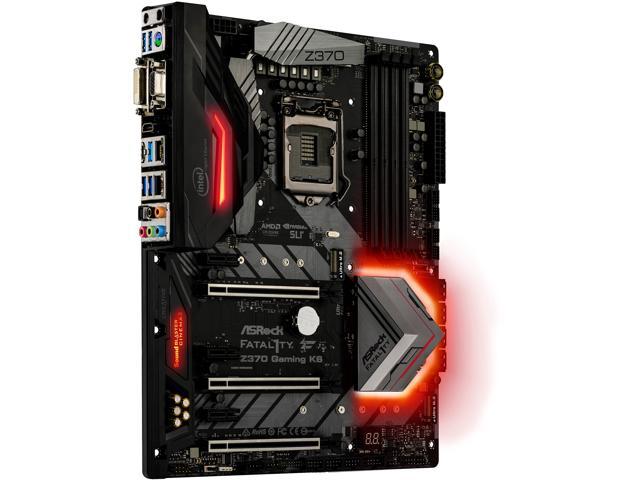 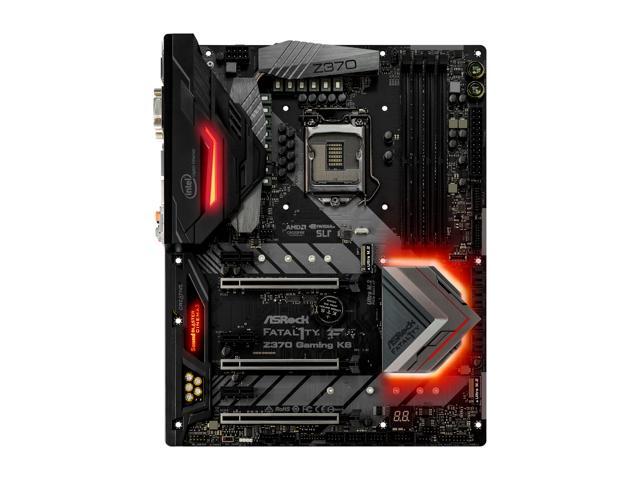 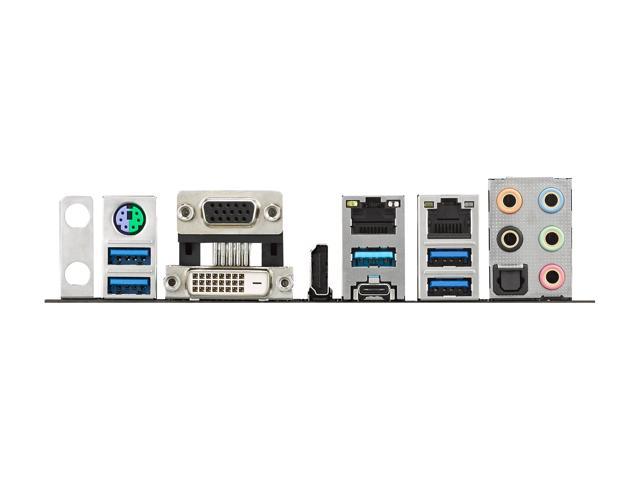 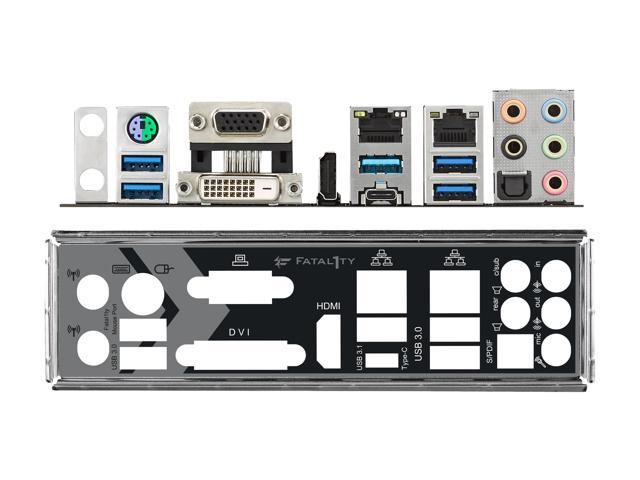 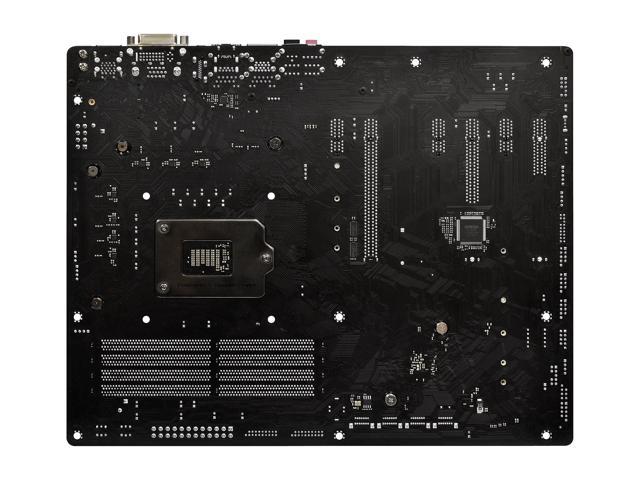 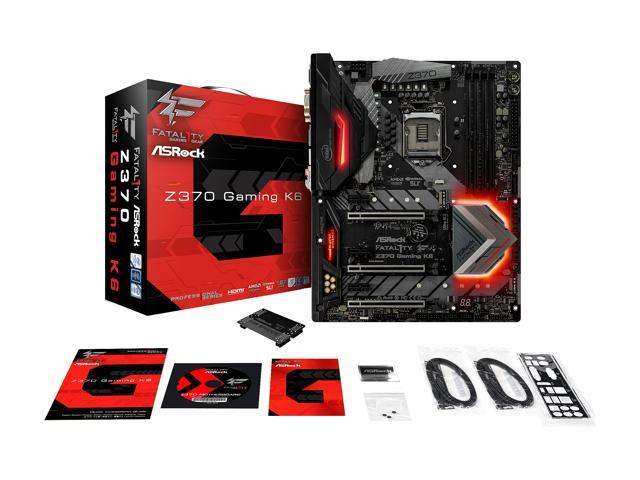 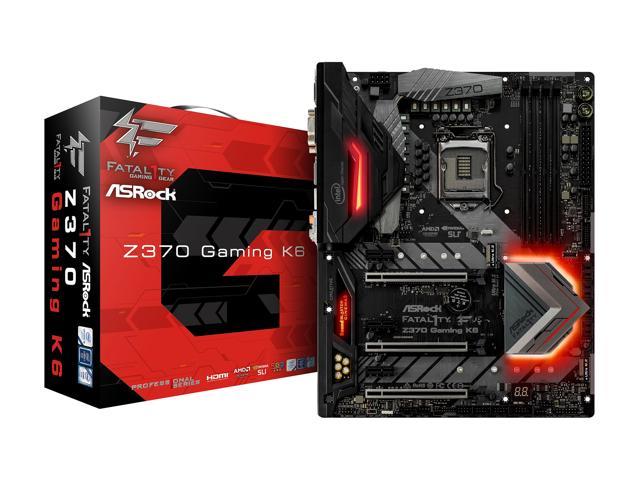 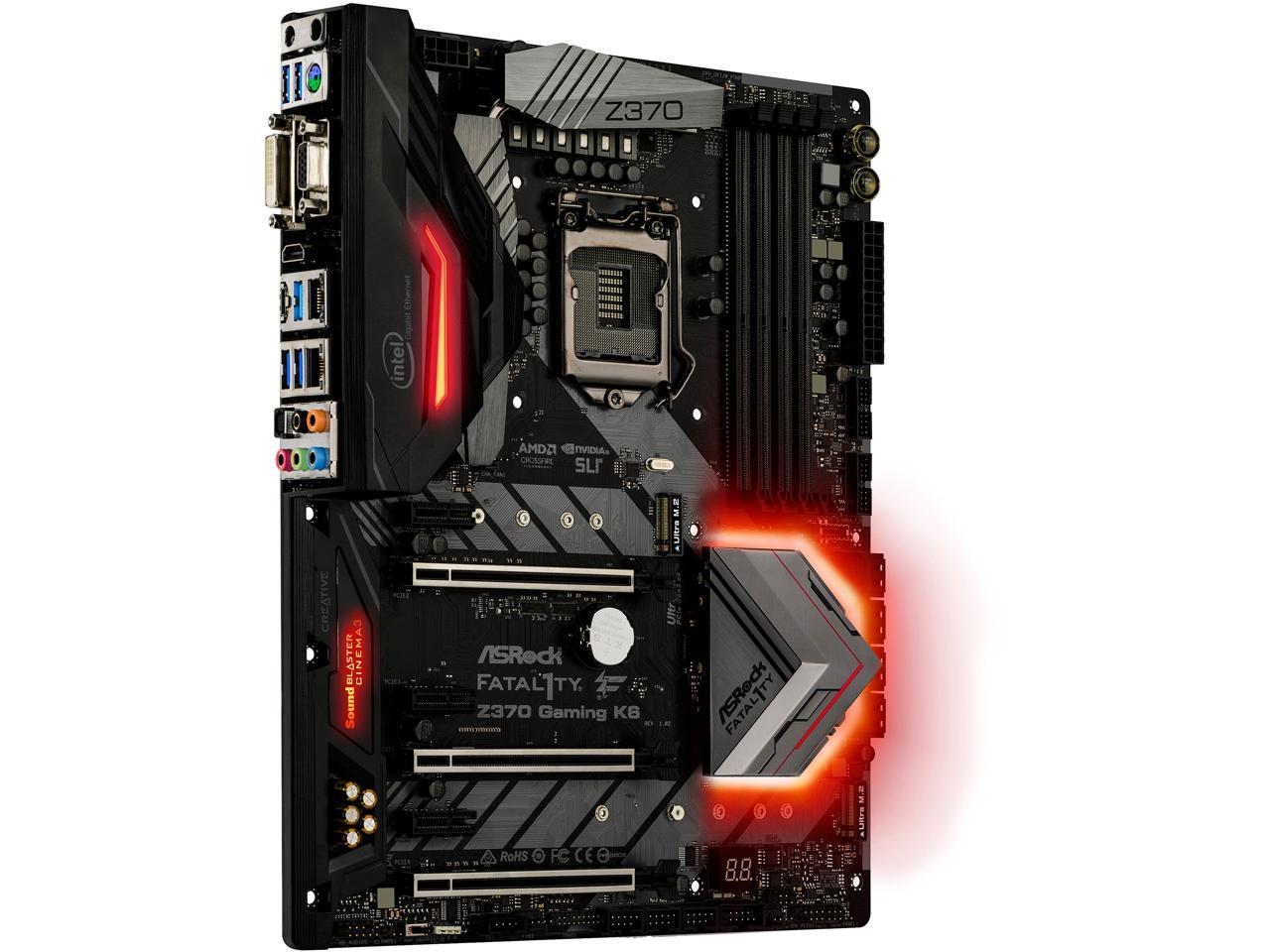 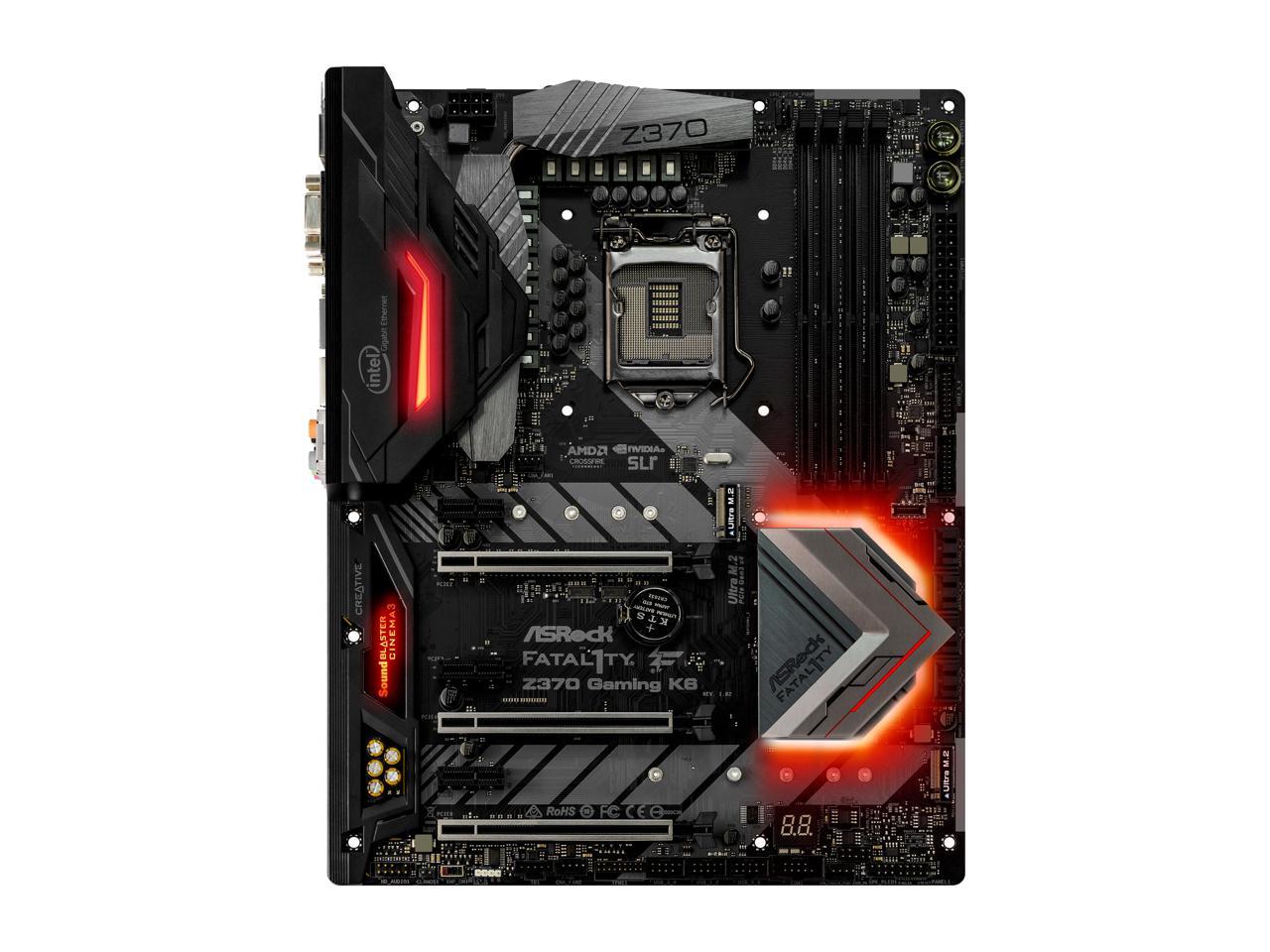 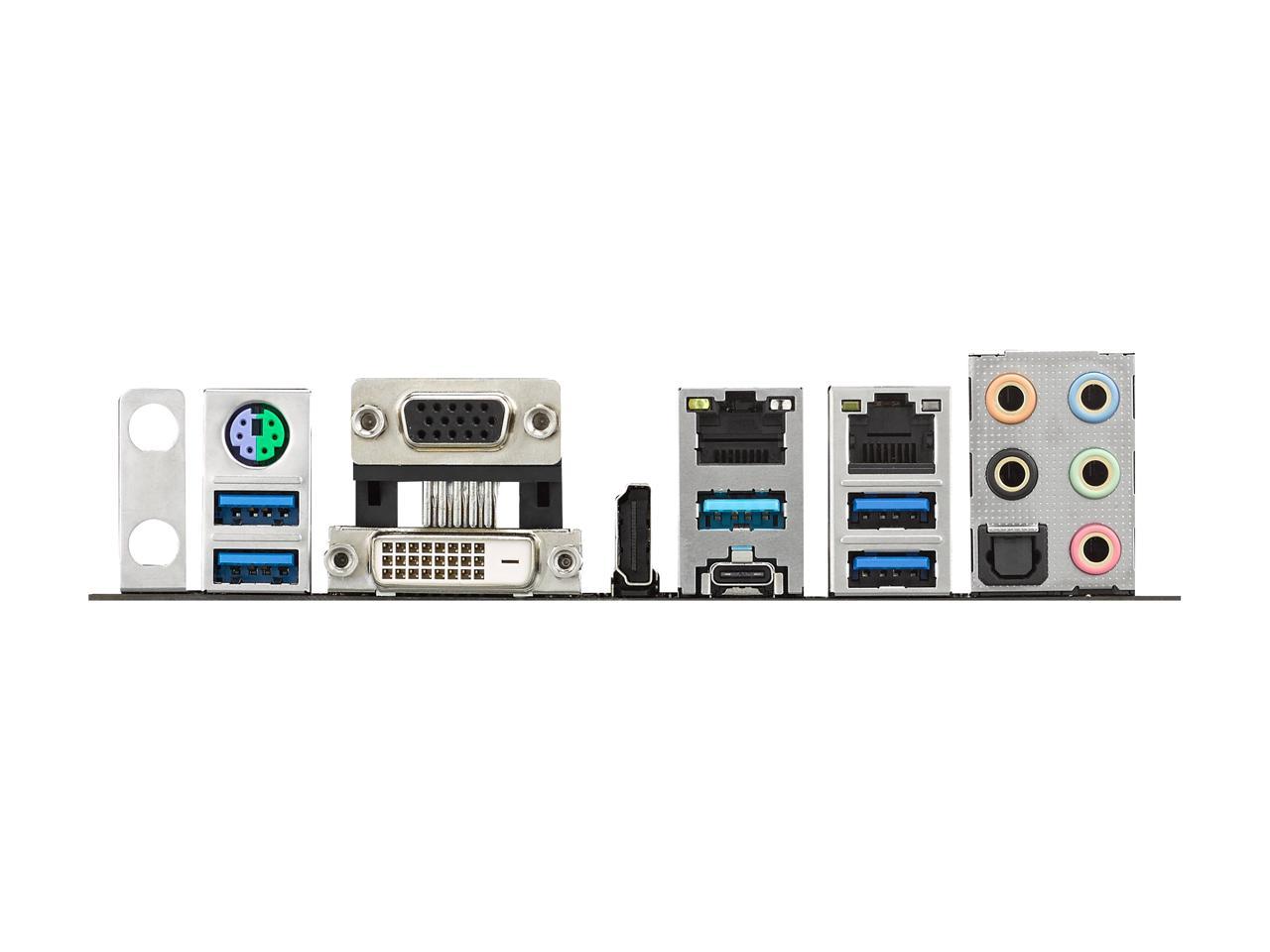 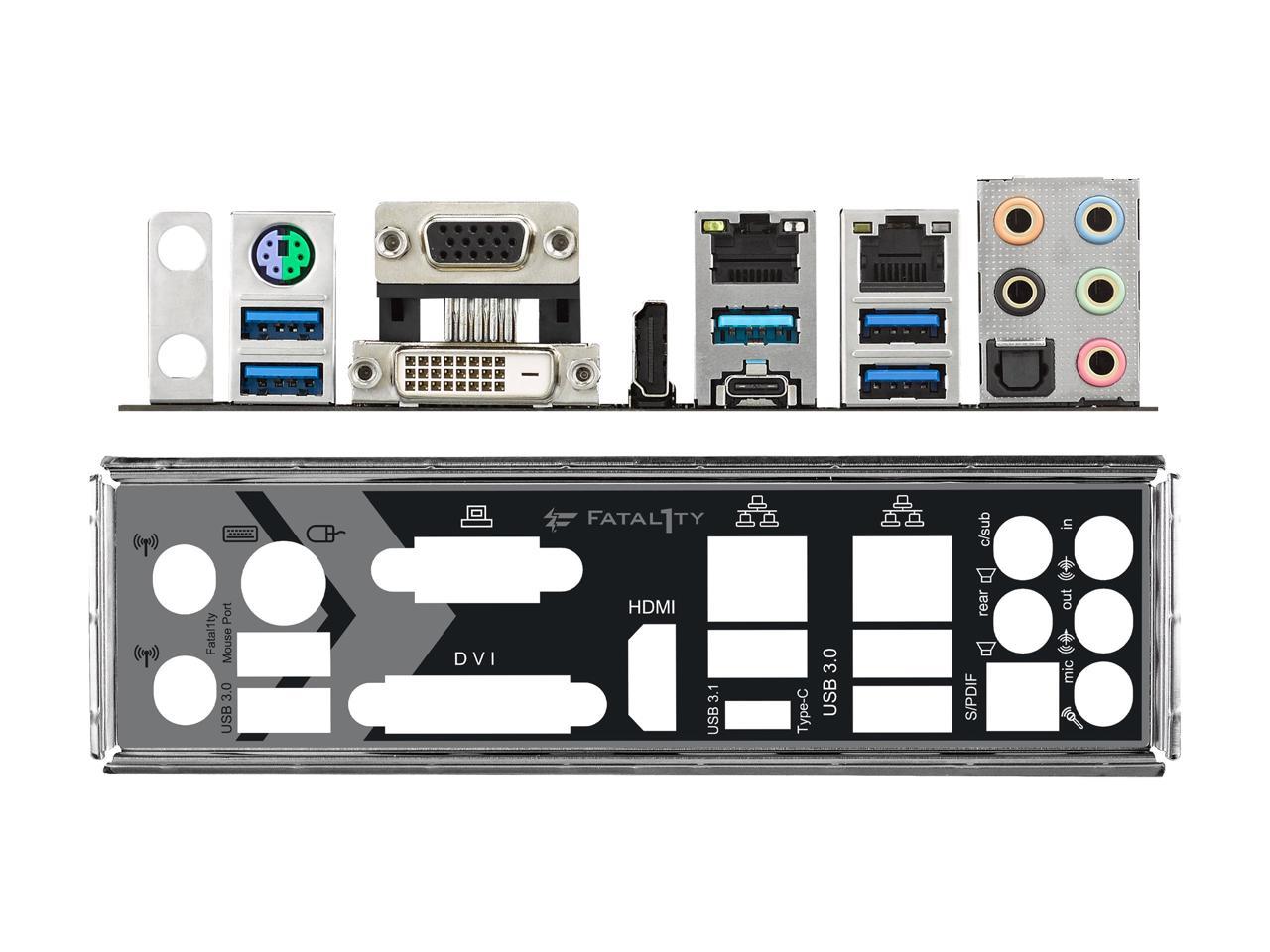 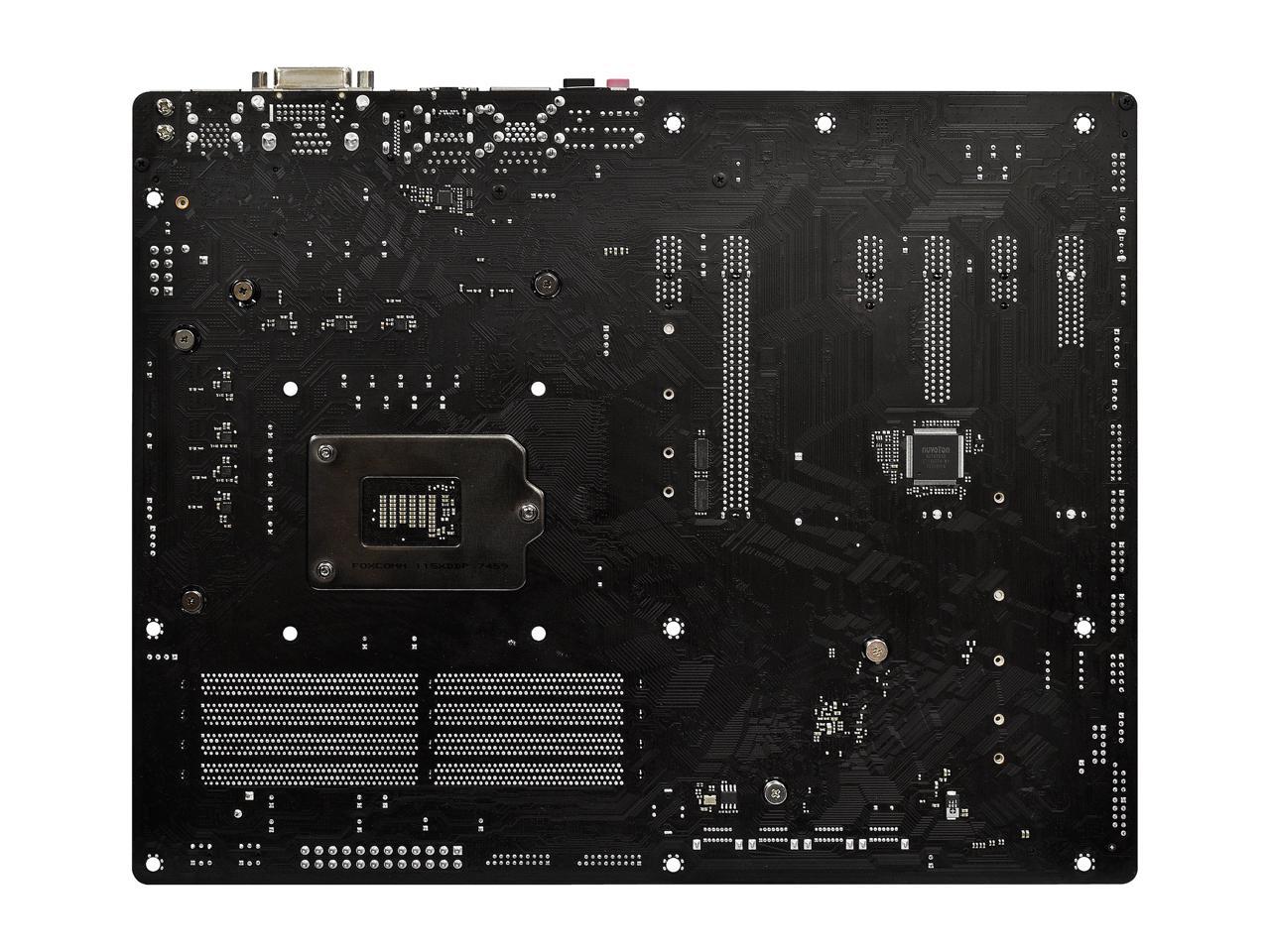 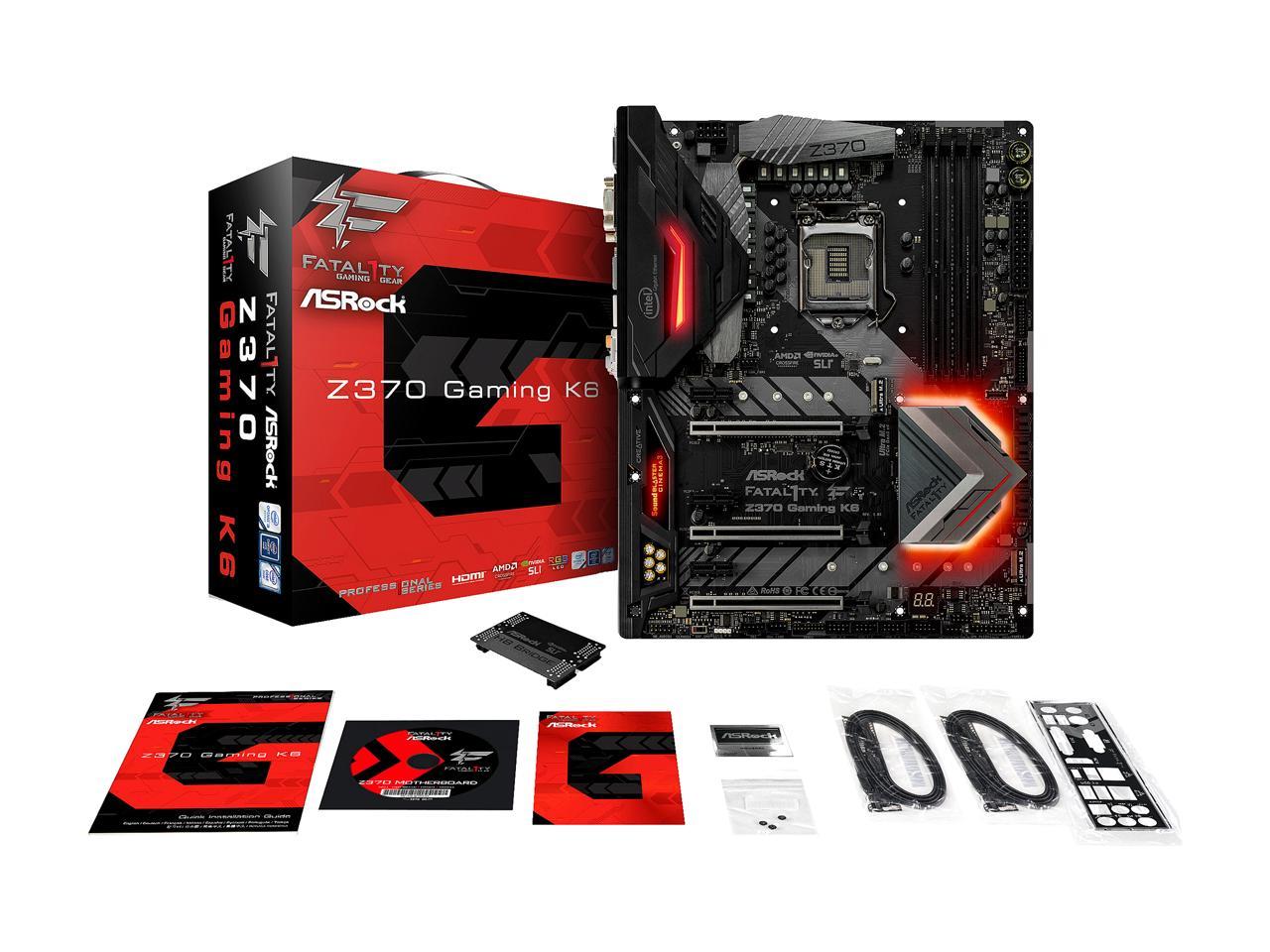 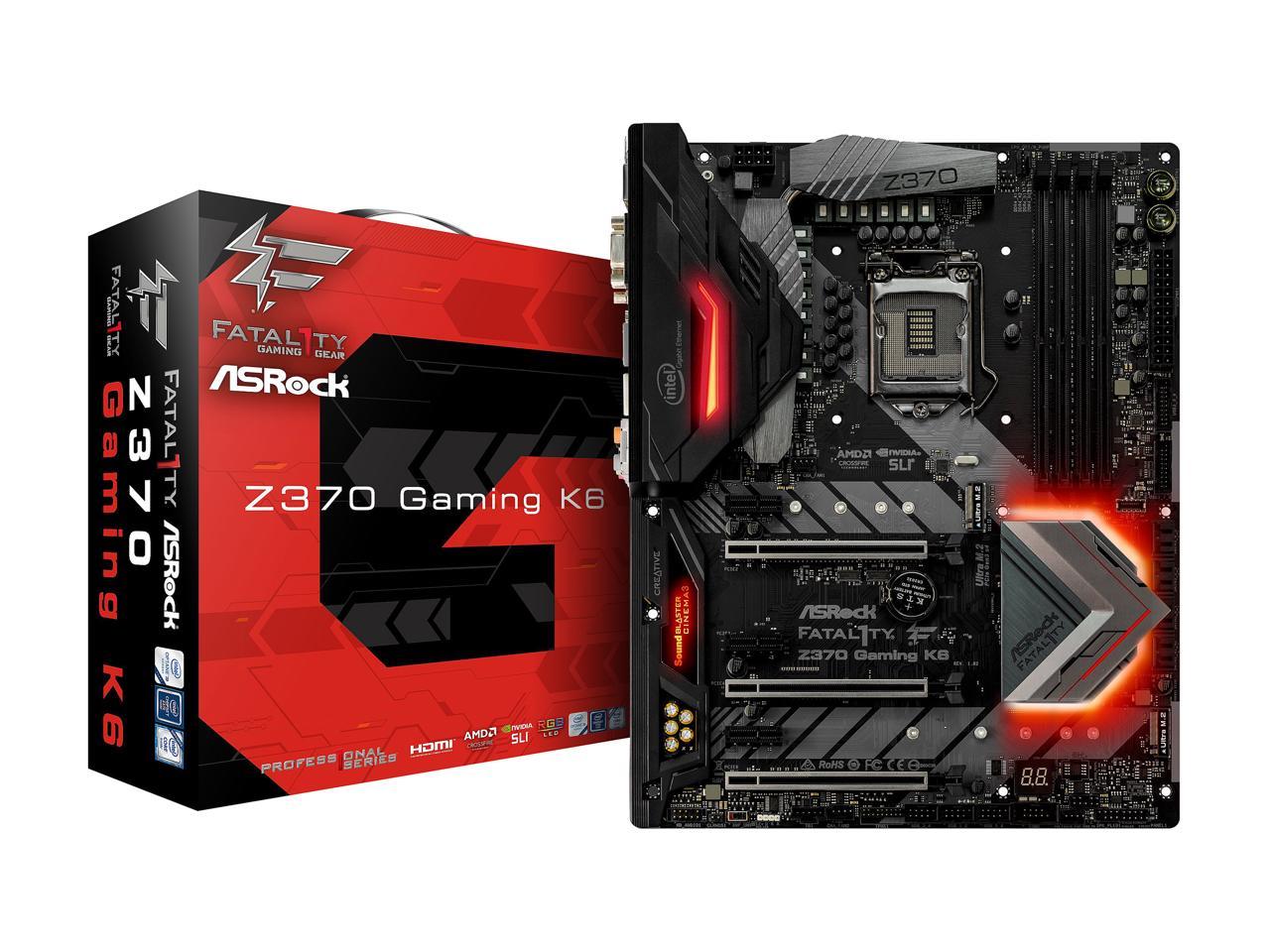 (81) Write a Review
OUT OF STOCK.
Overview
Specs
Reviews A pair of onboard Type-A and Type-C USB 3.1 Gen2 ports built on the rear i/o for supporting next generation USB 3.1 devices.

An additional external base clock generator which provides a wider range of frequencies and more precise clock waveforms. Cons: First board I assembled for approximately 3 hours was unfortunately DOA. However, I RMA’D that and re-purchased the same model motherboard for will-call same day to minimize downtime. Furthermore to make matters worse, I arrived to Newegg will-call facility to pickup the second board. However, before signing for the second board, I told their employee that I prefer to open and inspect the motherboard in front of him before signing and taking possession of it . Upon my inspection of another so-called New motherboard, I noticed several bent pins on the front panel connector, and numerous fingerprints all over the board, which show signs of use/open box. At this time , I called customer service from the willcall center to report my concern , and possibly get a discount due to open box item. Upon my request, I was denied any discounts and had to dispute and RMA the second board too. I will never recommend Newegg for reliable products, or good customer service.

Pros: - UEFI is user friendly. - Easy OC works well. - Outstanding board for extreme manual overclocking. - Included ASRock utilities are helpful and easy to use. -Plenty of fan headers for my HAF 932 Advanced. - The "breathing" red lights look pretty cool (and I don't usually care about how my computer's innards look).

Cons: - You have to be careful with the shared M.2 and SATA ports; be sure to read the manual about this if using an M.2 drive. - Manual could be a bit more clear about which DIMM slots to use if using only two sticks. It's pretty clear, but not dummy-proof. - SATA connectors sit directly under the graphics card on the fastest PCI-E port. - The top fan header is partially covered. Still useable, but it's slightly challenging to get a fan connector on.

Overall Review: This review for ASRock review rebate program. After many years of using Asus boards exclusively I tried a Z170 OC Extreme for my Skylake build in 2015. I was so impressed with it that I began my search for a Z370 board by comparing ASRock's boards against each other, and then taking the one best-suited to my needs and comparing it with the competition. It was no surprise to me that, after comparing features, price, and reviews (both amateur/user and professional), the ASRock board won. I notice one of the other reviewers alluded to the Extreme4 board having superior power supply to the CPU. I looked hard at the Extreme4, and decided this board was a better bet. Whether it is true that the Extreme4 has better supply to the CPU I can't say, but I can say that this board is up to the task of extreme manual overclocking. I didn't get a great i5-8600k for overclocking, but I found an overclocking site that shows the 10 highest CPU frequency overclocks for this CPU, and the Gaming K6 was the board used in the 2d or 3rd fastest, so I know it's the chip that limits my overclock rather than the board. Although this board has some flaws, the drawbacks are nothing more than annoyances, and the performance is top-notch. Easily deserving of five eggs.

Pros: Board looks great in my case, has a good layout, feels sturdy.

Cons: Arrived DOA with a short -- will not power any fans. I will update my 1 egg when I get a new one. - Also, ASrock support is terribad for some reason. "Reset bios" ... from a board that won't boot. ^^ gg.

Overall Review: Yes, I believe I received the statistical anomaly. :) Hoping to get my replacement shipped ASAP.

4 out of 4 people found this review helpful. Did you?
Manufacturer Response:
Dear Paul, We sincerely apologize for any inconvenience this may have caused you. Please trouble shoot the mainboard whether the issue is resolved. • Unplug the ATX power, remove all components from mainboard. • Remove the mainboard from chassis, place it on mainboard’s box. • Clear the CMOS. • Reseat the CPU and heatsink fan. • Test with single memory module. • Test with onboard video. • Connect the monitor. • Plug the 24 + 8 (4+4) pins ATX power. • Connect the chassis power switch to mainboard. • Turn on the power to check if its post. If you have any technical support inquiry, please contact us at http://www.ASRock.com/Support/tsd.asp We will assist you shortly. Thank you ASRock Support Tech Support Email: http://www.ASRock.com/Support/tsd.asp
Alfred W.
Ownership: 1 month to 1 year
Verified Owner
OK motherboard to build a new rig6/1/2018 1:53:22 PM

Pros: The motherboard has the right amount of specs and the budget to built a new rig. Able to auto detected correct timings for the specific ram. Easy to update the BIOS firmware by USB drive or internet connection in the BIOS menu settings.

Cons: Warning!!! Connecting the monitor to motherboard's VGA for Windows 10 installation will gives you consistent shutdown and errors during the process. It requires video card to complete a full OS installed. This took me two days to troubleshoot until I gave a last shot by installing a video card and finally it would completed the task of installing the OS. If I did not done this I would return this motherboard and get another brand. Needs to go to the advance BIOS menu for changing LEDs color and animation. For those who have the power/reset button LEDs on the MB are always on or LEDs and Fans still spinning with complete shutdown, these are the steps I did to resolve this problem. This also effects on Windows 10 users after the OS updates. In the BIOS menu go to Advance Menu(F6) > select the Advanced tab on the menu > select Chipset Configuration > scroll down to Deep Sleep > from here select from Disable to Enabled in (S5) or (S4/S5). You have to try either (S5) or (S4/S5) to see if it turns everything off on your MB. Also, after updates to Win10 version 1803 recently, I had to switch from (S4/S5) to (S5). I had no information to what cause this problem with Windows 10 updates that is interfering the MB's Deep Sleep settings.

Pros: -Seems to be the best balance of features at the price point -RGB lighting and OC settings can be completely controlled in the BIOS (no need for another program to run in the background on start up).

Cons: -GPU covers most of the SATA headers

Overall Review: I bought this motherboard to use with my i5-8600K as it seemed to be the best balance of features for the price. Onboard wireless really seems to be the only thing missing and I have a PCI wireless card so onboard wireless wasn't worth paying extra for. It arrived in a very pretty box and the only issues I had when taking it out were that one of the nuts for screwing down the M.2 drives was rolling around on the board (not a big deal, it's meant to come out to support different sized M.2 drives) and I only got 2 (should have been three) of the M.2 screws. The board is sturdy and well made (the armored PCI x16 slots are a nice touch). Installation hit a snag as the little prongs on the rear panel around the HDMI port wanted to go inside the HDMI socket so I had to bend them back with some needle nose pliers. As others have noted, I ended up with one of the screws from my previous ATX motherboard not being used with the K6. There was a hole in the motherboard that lined up with an unused hole in may case. Maybe a hole that is supposed to line up with a different form factor motherboard? Once I got it up and running it took me a little while to figure out how to get it to boot Windows 10 from the USB and it is not very clear when you have enabled your RAM's XMP profile. The directions were terrible for both of these, but that seems standard. MANUFACURERS: HOW HARD IS IT TO MAKE DECENT INSTRUCTIONS?! The board did recognize my RAM and loaded the XMP profile to get it running at 3600 MHz without any additional tweaking (make sure to check the ASRock QVL). It also immediately recognized my Samsung EVO 960 M.2 and loaded windows to it just fine. I like that the OC and RGB functions can all be set in the BIOS and don't require a program that has to be started on boot up and left running in the background. Haven't done any OC'ing yet but every adjustment that can be made for the CPU and RAM is there. One of the CPU fan headers is also designed to work with a pump for liquid cooling and you can tell it in the BIOS if it is a fan or pump. Make sure you get your SATA ports all set before installing the GPU as they will be covered and note which SATA ports are disabled when using M.2. The only thing I haven't quite figured out is in the BIOS it shows my CPU idling at ~40C but upon starting up windows both EVGA Flow Control and CAM show it at ~28C. I have an EVGA CLC 240 and I can hear the pump running so I feel like the BIOS number is off. All the negatives I had with this board are minor and I would definetly recommend it unless onboard Wifi is a must for you. This review for ASRock review rebate program.

Overall Review: I have purchased boards from many manufacturers and have over years narrowed down to ASRock exclusively as they have the best feature set and performance for the money. Solid boards and they back em up as any problems I have had were quickly remedied by contacting support or quick RMA.

Cons: - The cosmetic plastic piece over the IO is gigantic and would have prevented me from installing my radiator on my mid-tower's top vents had it not been removable.

Overall Review: I'll update this review in a few months with anything additional that comes up.

Overall Review: I was having trouble initially getting my 8700k to run 5Ghz stable under 1.45V. Once I updated my BIOS, I'm now running 5Ghz @ 1.3V @ max 70C (overnight Prime 95 stress test run). Initially bought a asus strix-h board which didn't have the VRM cooling and was DOA out of the box, so happy with the switch.