product
13-157-339ASRock FM2A85X Extreme6 FM2 ATX AMD Motherboardhttps://www.newegg.com/asrock-fm2a85x-extreme6/p/N82E16813157339https://c1.neweggimages.com/ProductImageCompressAll640/13-157-339-06.jpgOutOfStock120.91USD/home/Components/Motherboards/home/Components/Motherboards/AMD MotherboardsASRockASRock FM2A85X Extreme6 FM2 AMD A85X (Hudson D4) SATA 6Gb/s USB 3.0 HDMI ATX AMD Motherboard114.994108
OUT OF STOCK
Sold by: Newegg
Shipped by Newegg
This item is currently out of stock and it may or may not be restocked.
Out of Stock
Add To Wish List 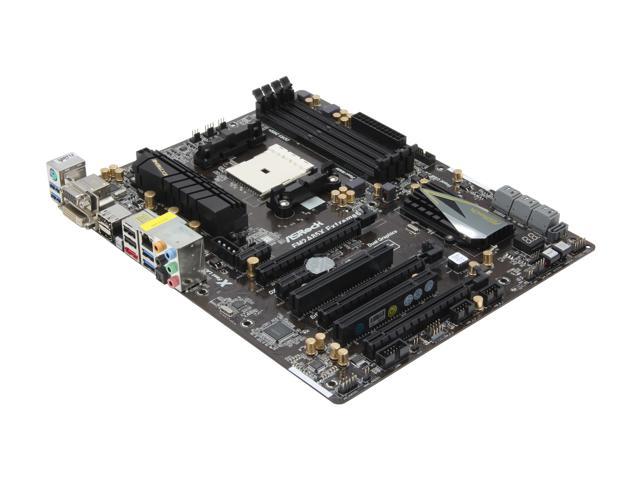 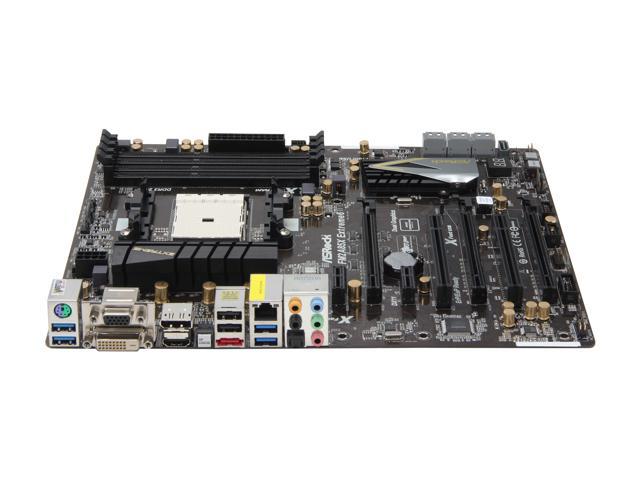 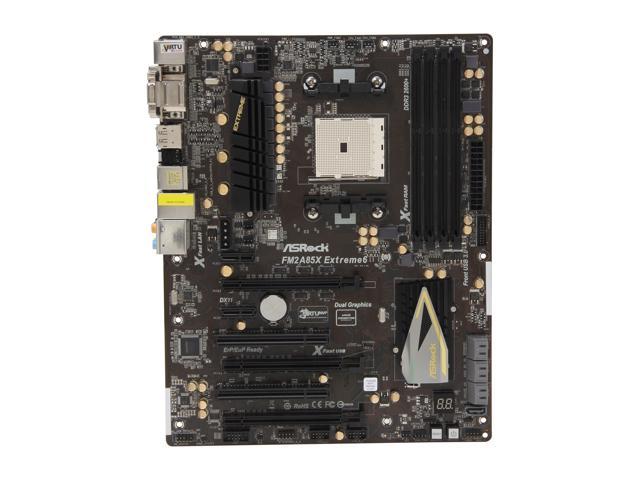 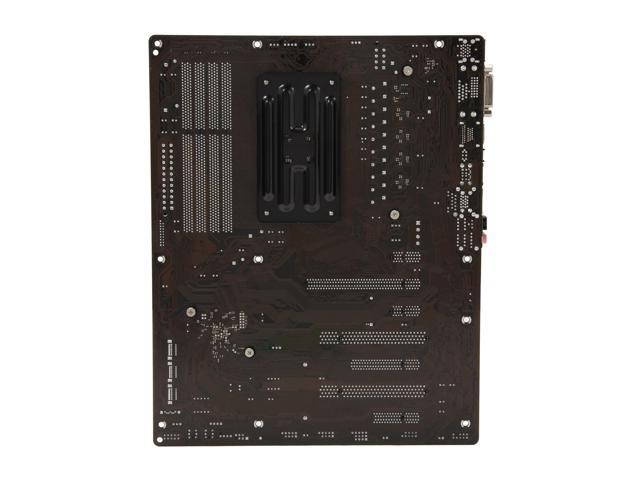 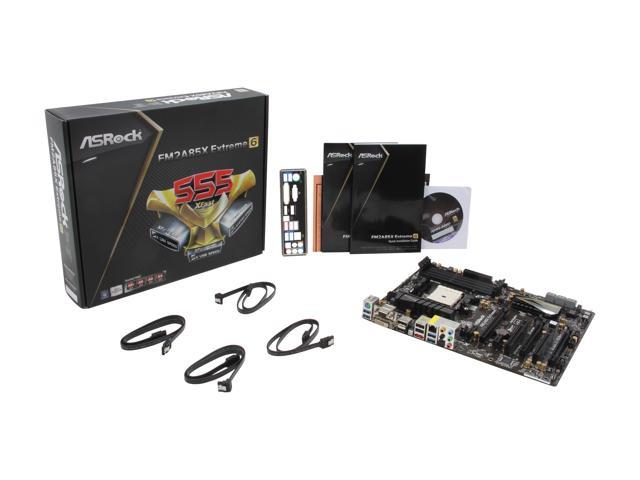 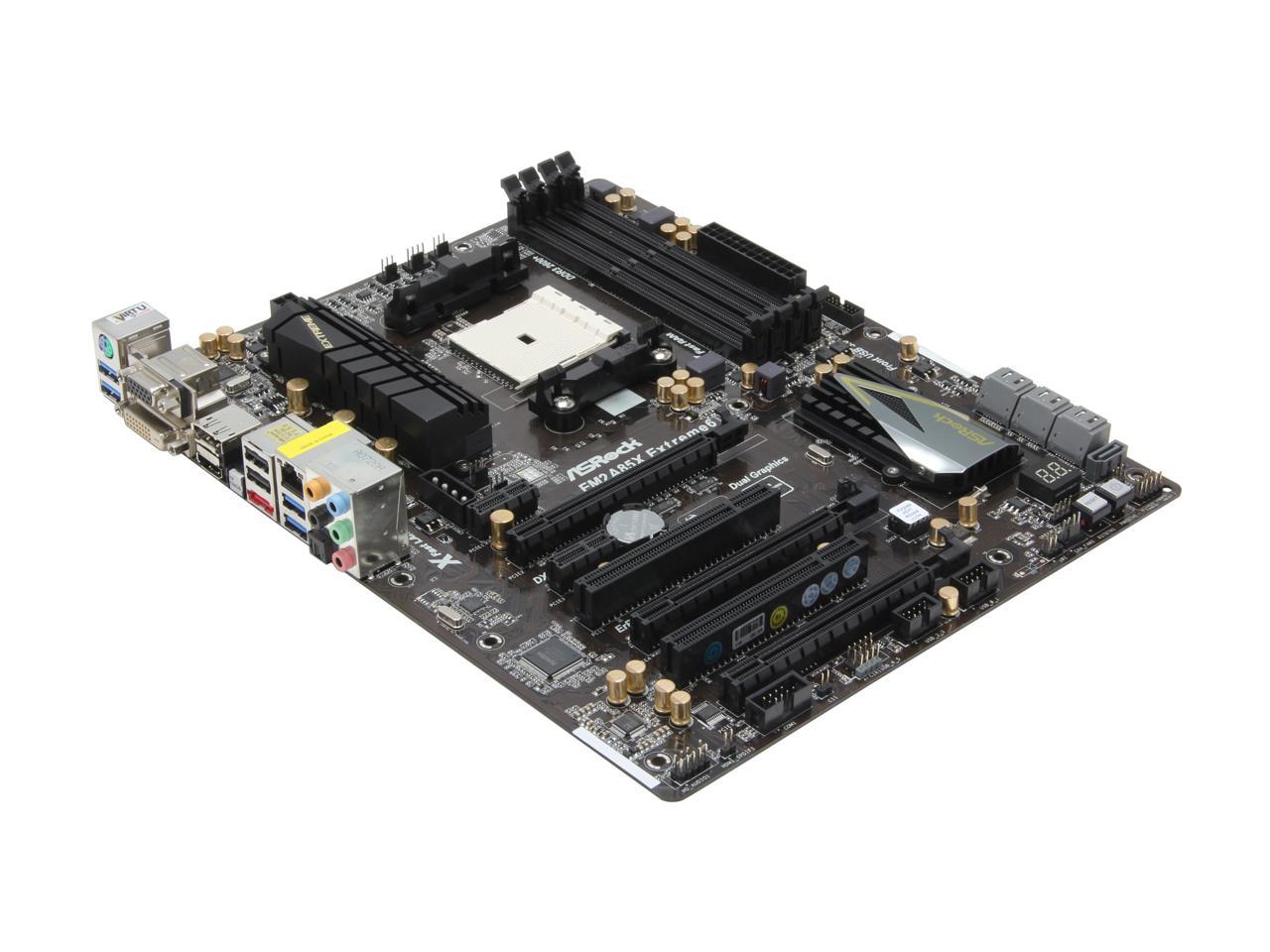 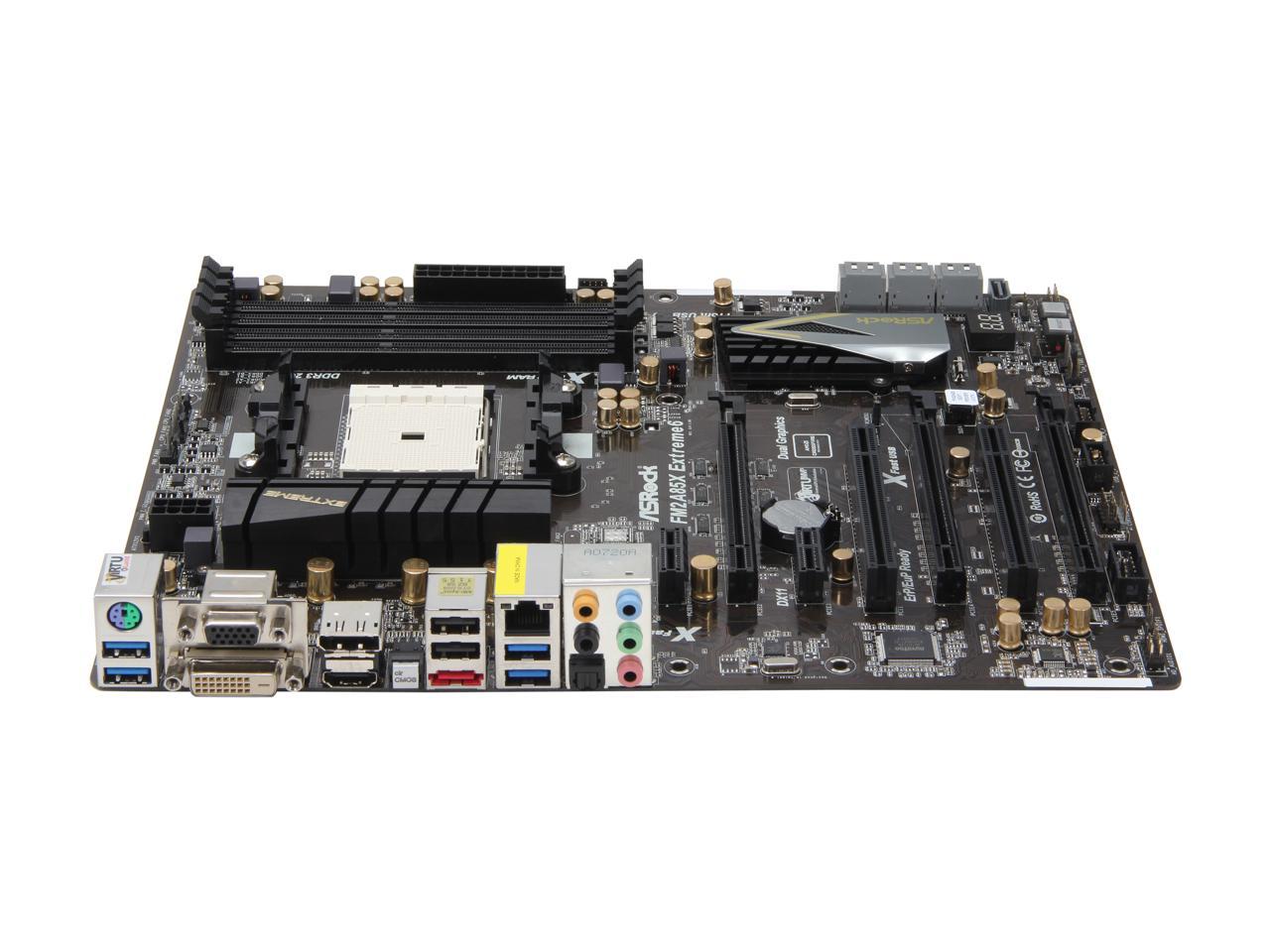 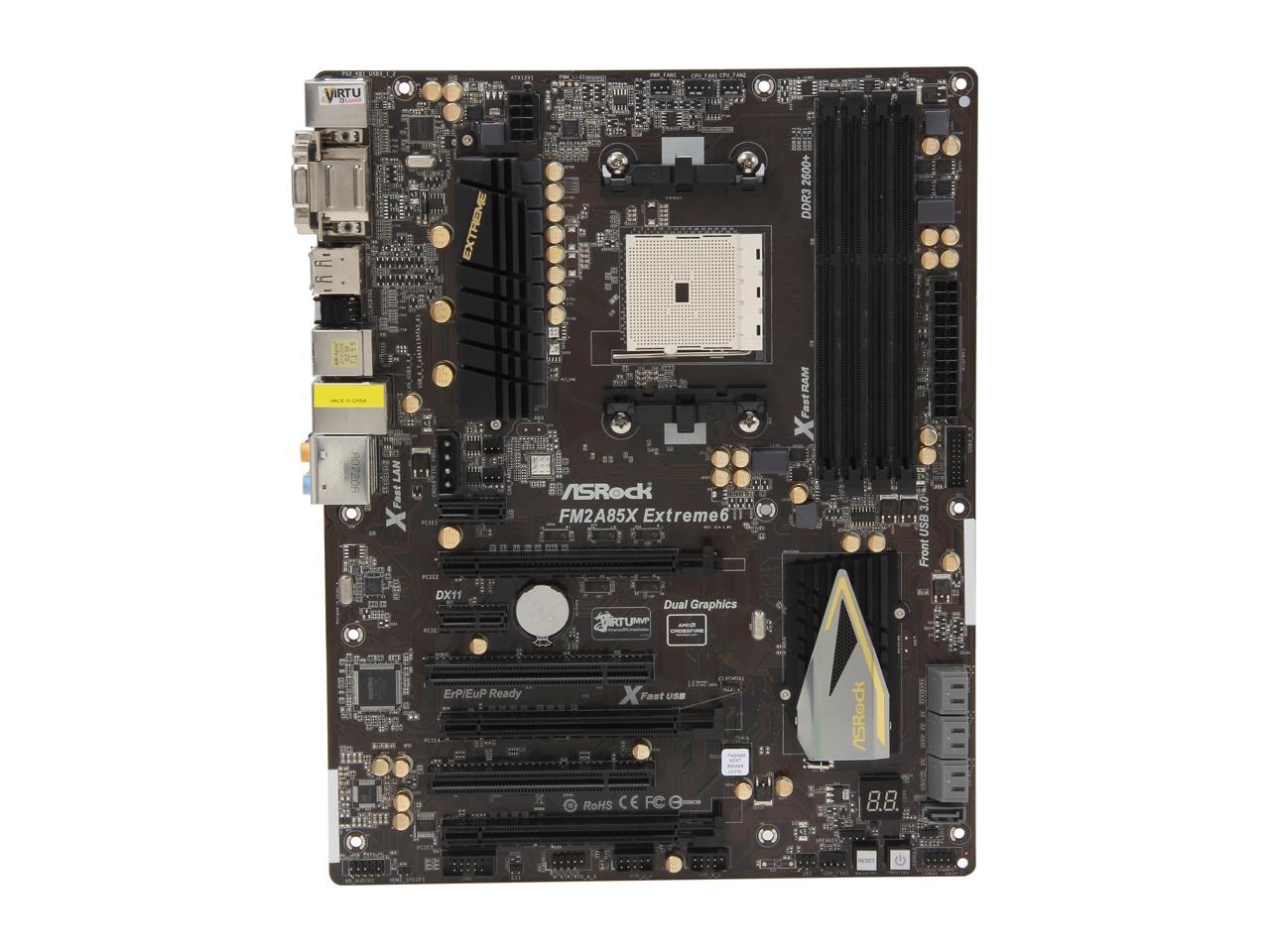 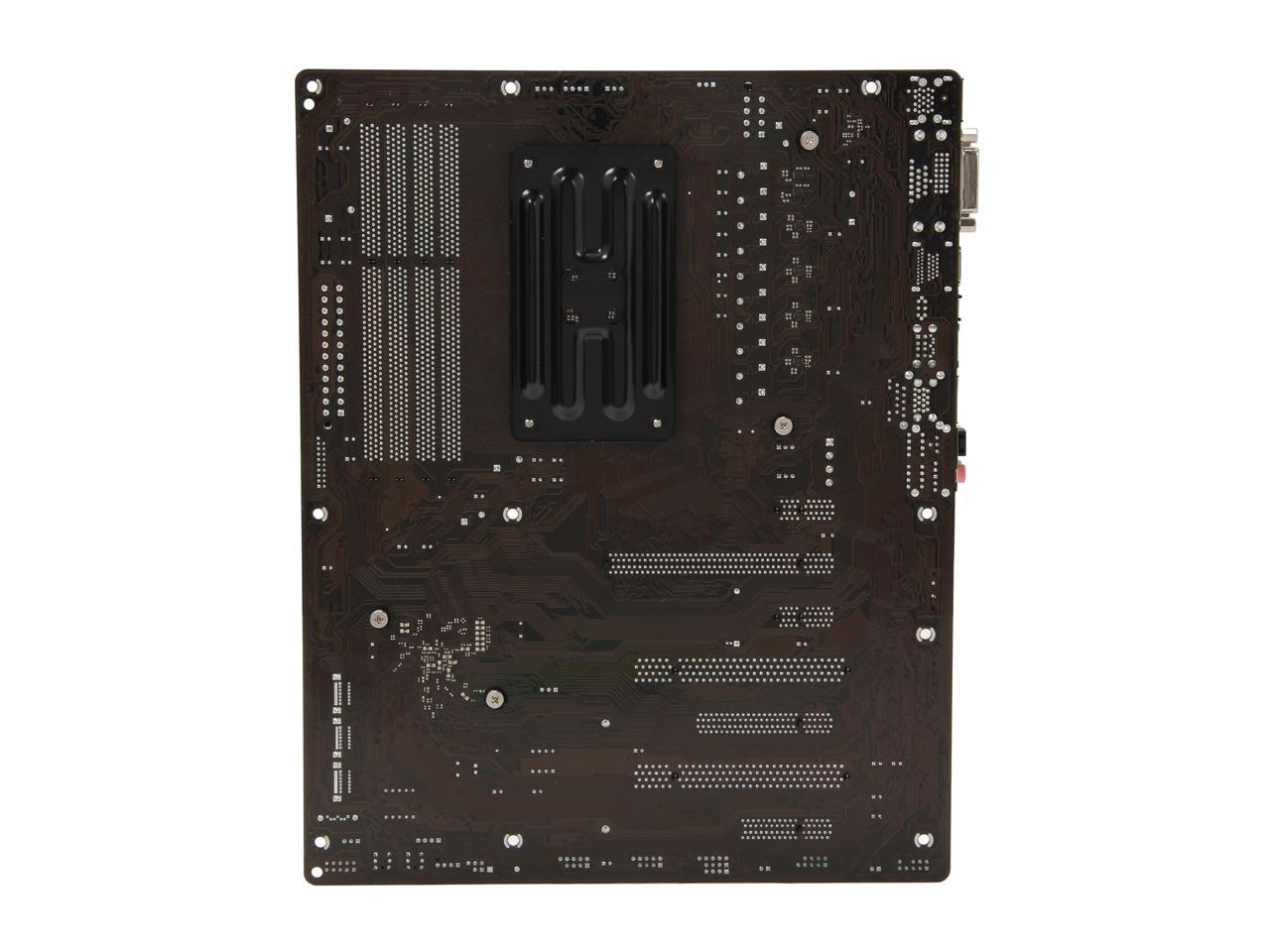 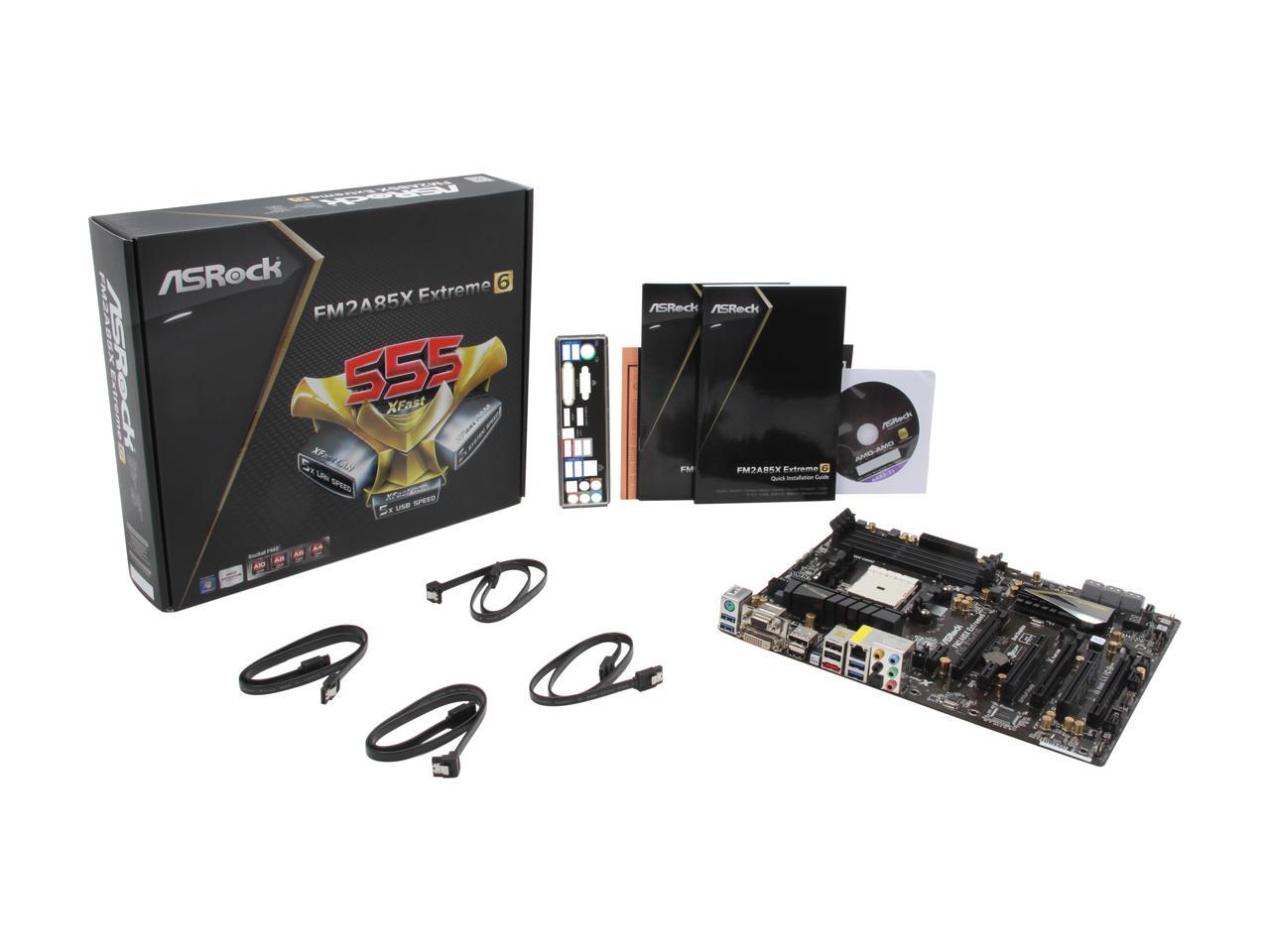 (108) Write a Review
OUT OF STOCK.
LOADING...
Overview
Specs
Reviews

Pros: I wasnt sure about going with asrock but I am glad I did! This is an extremely well made board and all you'll need for your Trinity build. Forget the higher priced gigabyte and Asus options.

Cons: While installing windows 7 I had my USB keyboard/mouse in the top usb3 ports. This did not work. You have to put them in the usb2 ports during install then you can move them back. Not worth deducting an egg over as it was an easy fix. The board also defaulted my 1866 gskill ram to 1600. Was an easy fix with the xmp profiles.

Pros: low price for the features with an excellent BIOS ...and my entire system looks great murdered-out in black.

Overall Review: the last time i built a computer, it had an overclocked Athlon on an Abit NF7-S v2 board ...so i was a bit rusty and behind the times. i liked my Abit, but the reviews on this board were too good to pass it up. everything booted right up, i went into the BIOS to set my RAM for 1866, then installed the OS and board drivers ...all without a single hiccup. i could not be happier with my system. AMD A10-5800K Trinity (stock clock w/ OE fan for now) G.SKILL Sniper 2 x 8GB (F3-1866C9D-16GSR) Rosewill Capstone 550 M Corsair Force Series GT 60GB SSD Western Digital Black WD5003AZEX 500GB Vantec UGT-CR935 USB 3.0 Multi-Memory Card reader ASUS DRW-24B1ST SATA DVD Burner Thermaltake Dokker Mid-Tower Windows 7 Home Premium

Overall Review: I/O shield was slightly bent on arrival, but, not enough to knock an egg off. I was, at first, hesitant to try out ASRock... will definitely be a repeat customer. I'm not a PC gamer but I very well might get back into it now. Haven't overclocked... yet.

Pros: Short of fixin' supper this will do it all!

Cons: Unfortunately I bought a 16gb set of DDR3 2600 G Skill RAM. I did not read the fine print, and now I know that this board can only handle TWO sticks of DDR3 2600! Since my 16gb kit is four 4gb sticks two of them are paperweights! BUT not their fault I failed to do my homework!

Pros: - 8+2 phase. Great for overclocking. And speaking of overclocking this board is pretty easy to do so. I'm still in the process of tuning my 5800K but overall it seems pretty straightforward. Change it to manual, adjust the multiplier, input your desired CPU voltage, run Prime 95 (custom, 90% RAM) for ~12 hours, and repeat. - Realtek ALC898. This is Realtek's highest onboard audio chip that is featured on most high-end boards Intel boards. Besides this one, there are currently zero FM2 boards that have anything better than a ALC892. Of course it's nothing compared to a dedicated sound card but it is certainly a step up from the previous Realtek generation. - 3 PCI-Express x16 slots! Two of which are 8x/8x when occupied. Nice. - Onboard power and reset buttons. Also a nice add since I do a lot of test builds outside of a case. The same goes for the onboard debug LED which can be handy. - Combo PS/2 port. Great for anyone who is still rocking an older keyboard or a mechanical keyboard. N-Key rollover FTW! - Gold plated capacitors. Probably does nothing in terms of performance but they look so cool. ;) - The rear eSATA port runs of the A85X FCH. Huge plus for that. I hate third-party SATA controllers. They're slower than the native ones and make booting slower.

Cons: - Brown PCB. Not sure why ASRock opted for such an ugly color over the more popular black. - 4-pin Molex is in an odd position, above the PCIe slots. Ideally it should be towards the right side of the board, near the 24-pin ATX or use a right-angle SATA powered connector found on some Gigabyte boards. But I do have to give ASRock kudos for implementing it as it does help when you use a couple of power hungry video cards that can draw to much current through the PCIe slot and fry your 24-pin ATX cable. - Single BIOS chip. Won't be a problem for most users but it would have been nice to have a backup just in case a BIOS update goes astray. - VGA (aka D-Sub) connector? Other than a few older projectors and CRTs, I don't know of many good uses for such a legacy port. I think a DVI port would have been a smarter decision. - Realtek LAN. Okay.. I'm being picky and a bit biased on this one. I'm a sucker for Broadcom, Marvell, or Intel NICs.

Overall Review: I've been eyeing this board ever since FM2 was launched. Originally I was going to get the Gigabyte GA-F2A85X-UP4 but felt it was lacking for the $130 price tag. I also felt the same for the Asus F2A85-V PRO (although they've got their UEFI down perfectly compared to everyone else). But for $100 that the FM2A85X Extreme6 normally goes for is nothing but mind-boggling. You get better features for less $$. To sum, the board has been kicking along great for about a week since I've had it. Overclocking is pretty easy to do. There aren't any hoops to jump through just to tweak your CPU or RAM for that matter. ASRock has been stellar with their UEFI/BIOS updates. If you are looking for which FM2 ATX board to buy, don't look any further, this is the one to get.

Pros: Mobo is great so far. asrock customer service was pretty good too in solving the one problem i had.

Cons: the mobo i received came with an old BIOS chip rev 1.5 and my processor required the 2.0 a simple phone call got my new chip in the mail but the hassle and wait of that is very annoying after i had waited for the mobo and then had to wait longer

Overall Review: i like this mobo. really good bang for your buck. got a pretty good rig setup. would definitely recommend this mobo for a gamer on a budget. i would couple this with AMD A10 6800k 4.1ghz processor. that is what i got and it is a masterful combo.

Pros: Excellent motherboard for my A10-6800K APU. The UEFI BIOS is a nice little luxury, and updating it went flawlessly. Setting my RAM from its default 1600 (below stock) to 1866 (stock) was literally a 2 click process.

Cons: The added software is useless to me. It says it makes USB ports and LAN faster, however it wasn't noticeable and took up space, so I uninstalled it. Not enough to knock an egg off considering it was a breeze to get rid of.

Overall Review: Easy to use. Also, make sure to clear CMOS when you first start it up. Nothing would work for me until I did.

Pros: Tom's Hardware approved, Great Price, Everything you'll ever need in a motherboard!

Cons: Ordered two of these, and one of them was DOA out of the box. It never posted at all. Thanks to Newegg though, they gave me an RMA without a question, and a replacement is a few days away!! Once again Newegg, thanks, YOU RAWK!!!!

Overall Review: All the bells and whistles and then some, all rolled up into one lean mean fighting machine! Got my A10 5800 clocked at 4.0 ghz, with turbo on, and turbo is set at 4.4 ghz. I haven't experienced so much as a burp, much less a hiccup out of it yet! Once i figured out the settings on the board, I realized that the best and easiest way for me to effectively overclock it was to utilize the unlocked multiplier of the black edition die. I believe that i could push it a little higher without issue on the stock fan, but i'd rather let it break in for a while before I try to coax a little more speed out of her. Funny thing is that this isn't even a gaming machine for me, it's a HDCP total media center that I built. It's in a Moneual 972 black case. I have a Blu-Ray player in it, 16 gig of AMD Radeon RG 2133 Gamer series ram in it, and I have a Silicondust HD Homerun Prime as my tv tuner. With Windows 7 Ultimate as my operating system so i can join my home domain, this machine is able to take anything i have cared to throw at it without even thinking about cracking a sweat. It really makes for a nice piece of equipment in the entertainment rack indeed. Thanks Newegg, YOU RAWK!