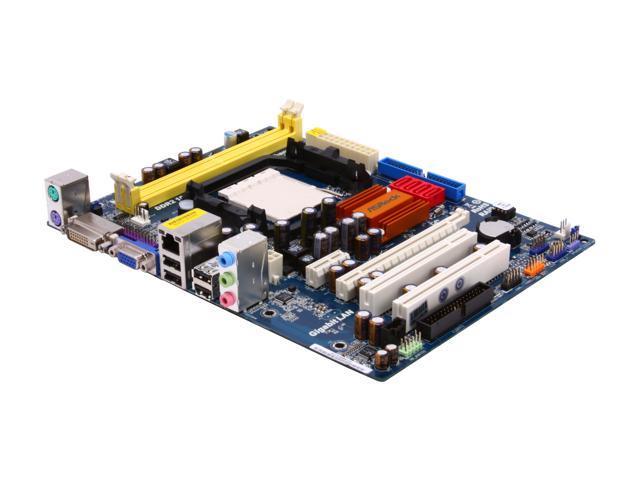 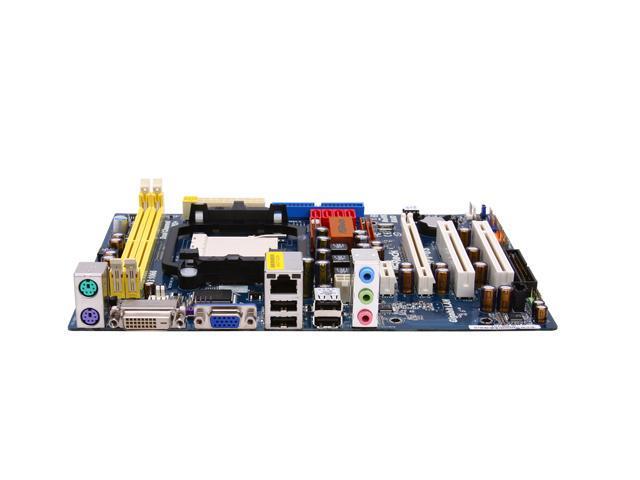 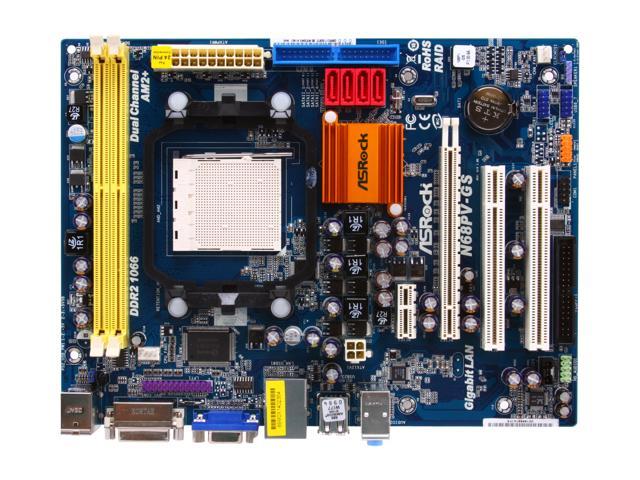 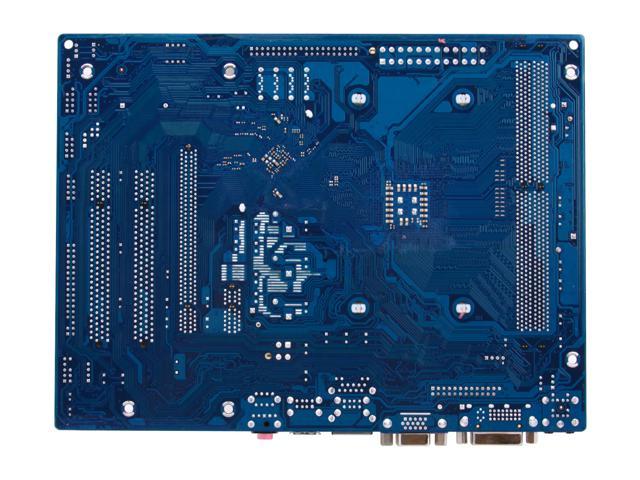 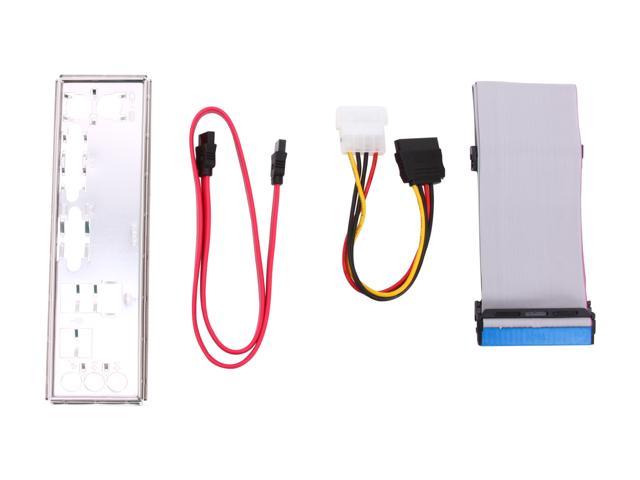 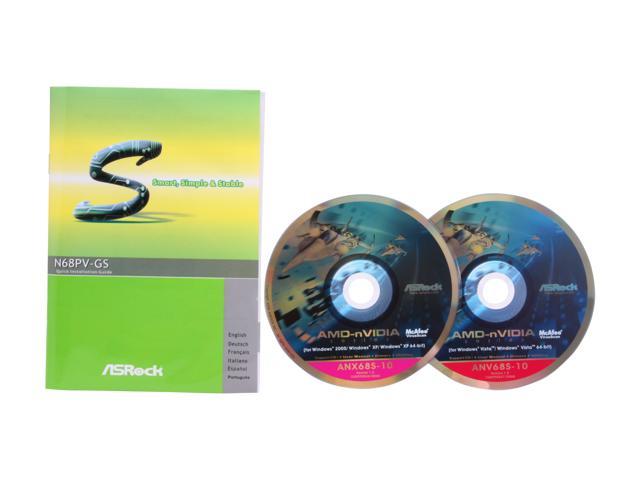 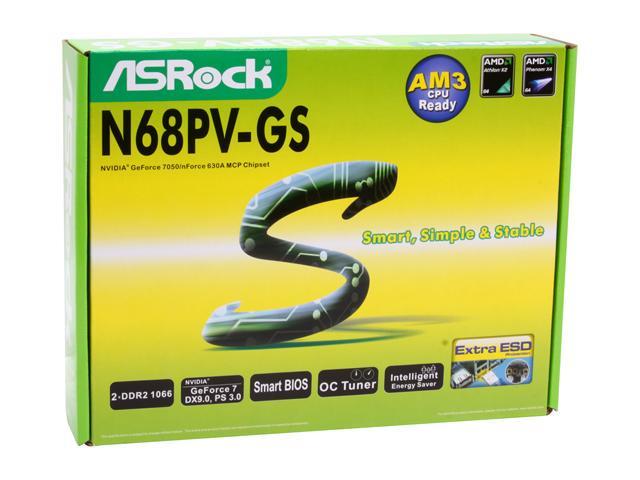 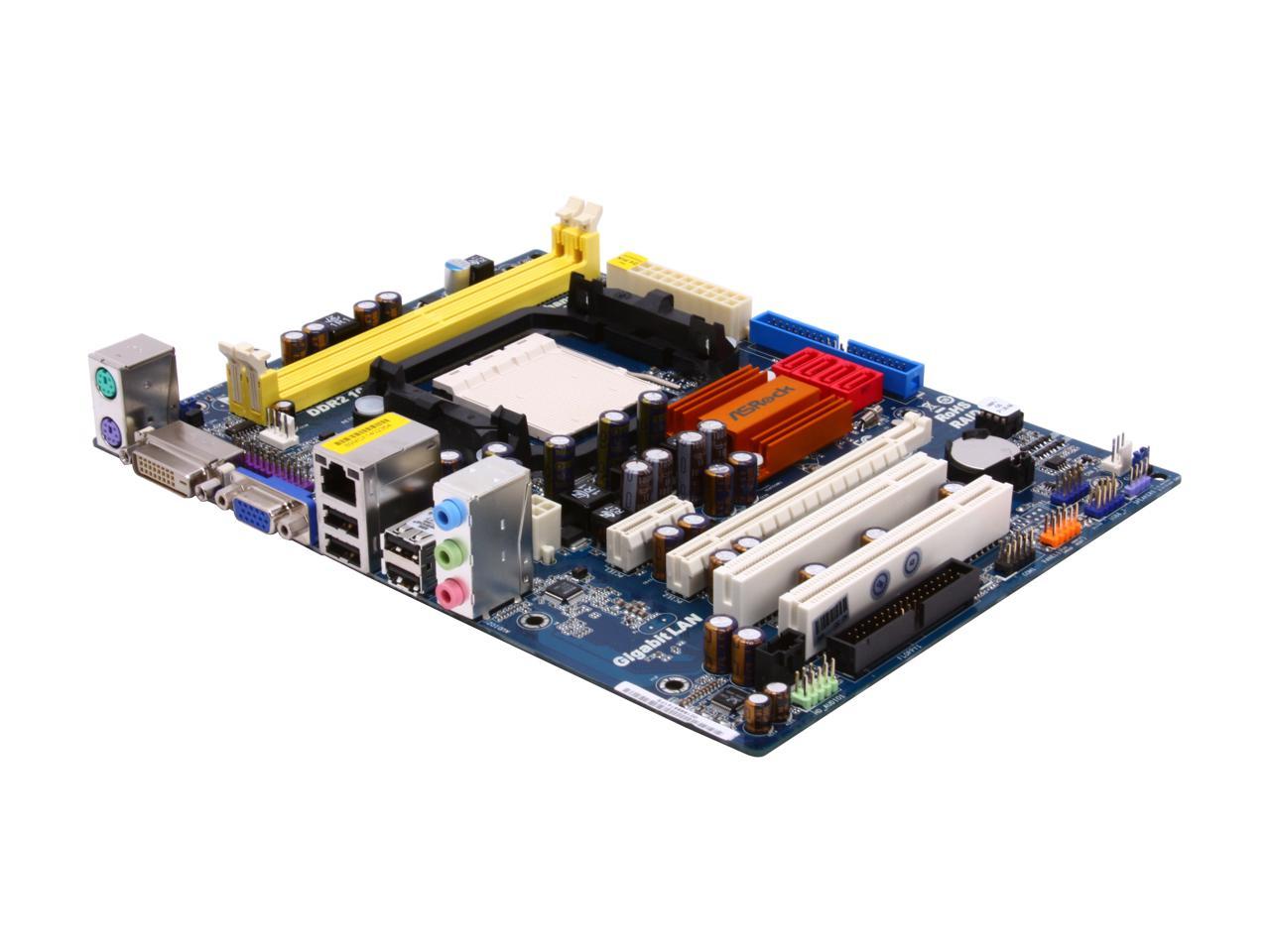 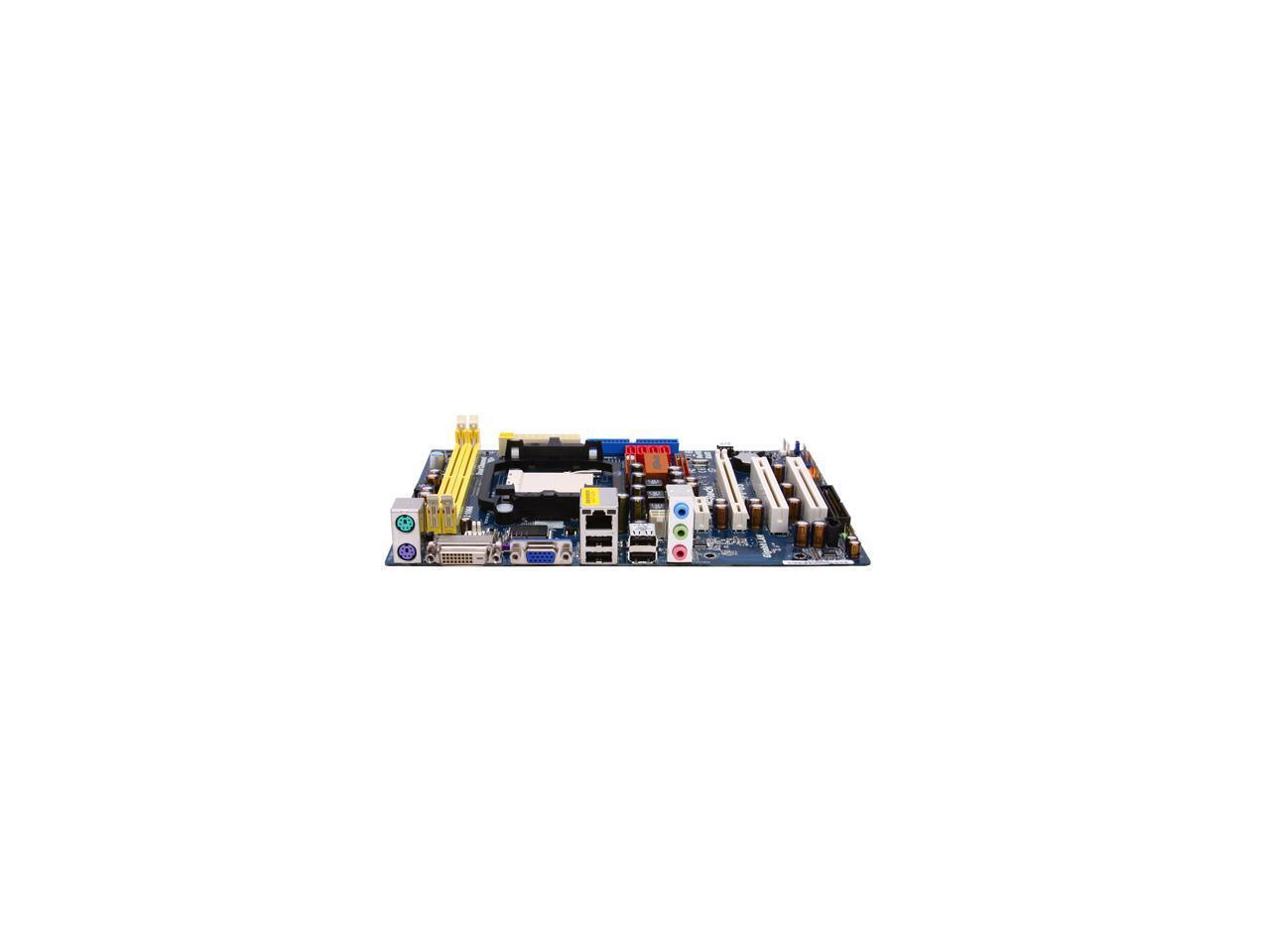 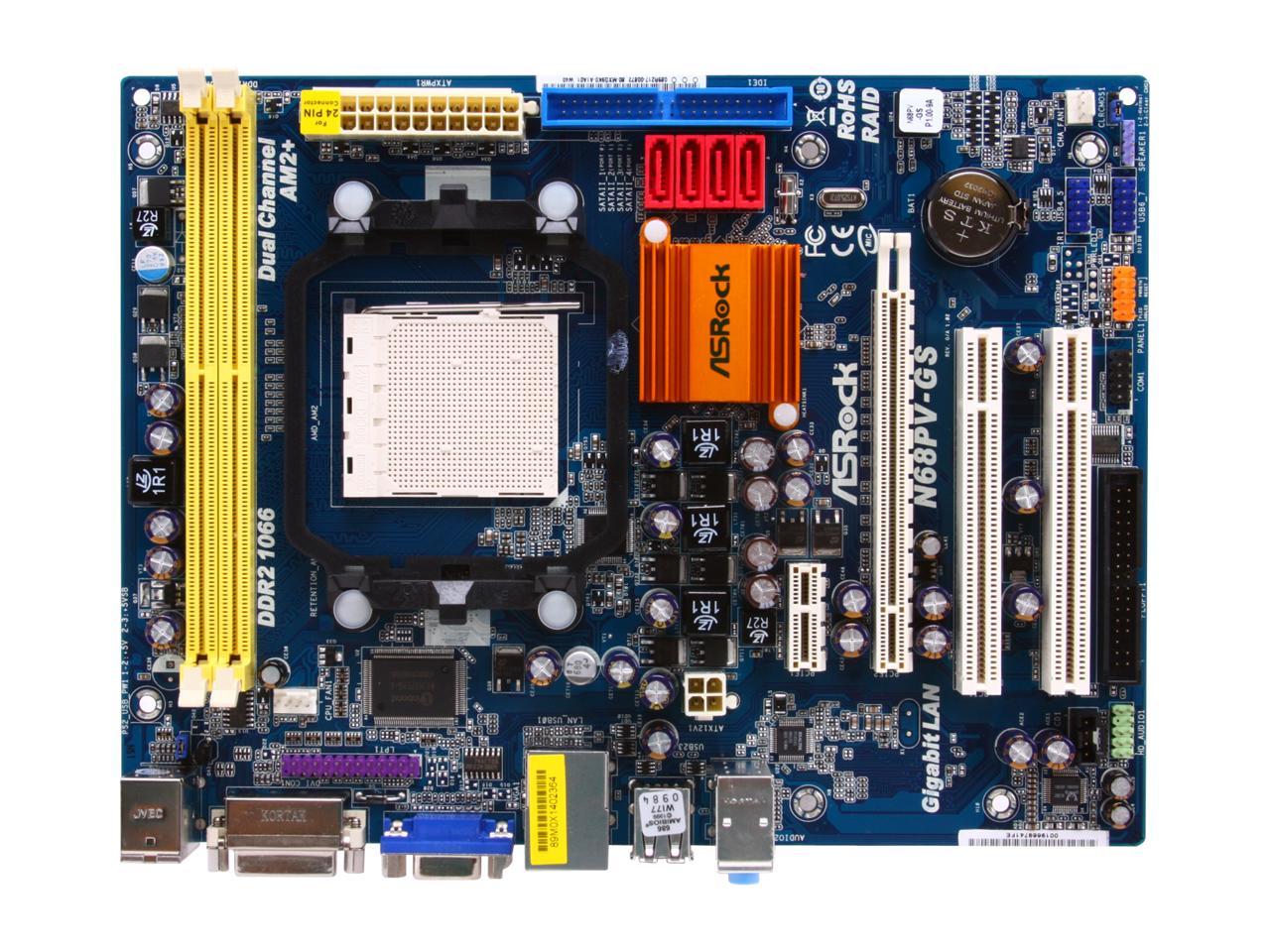 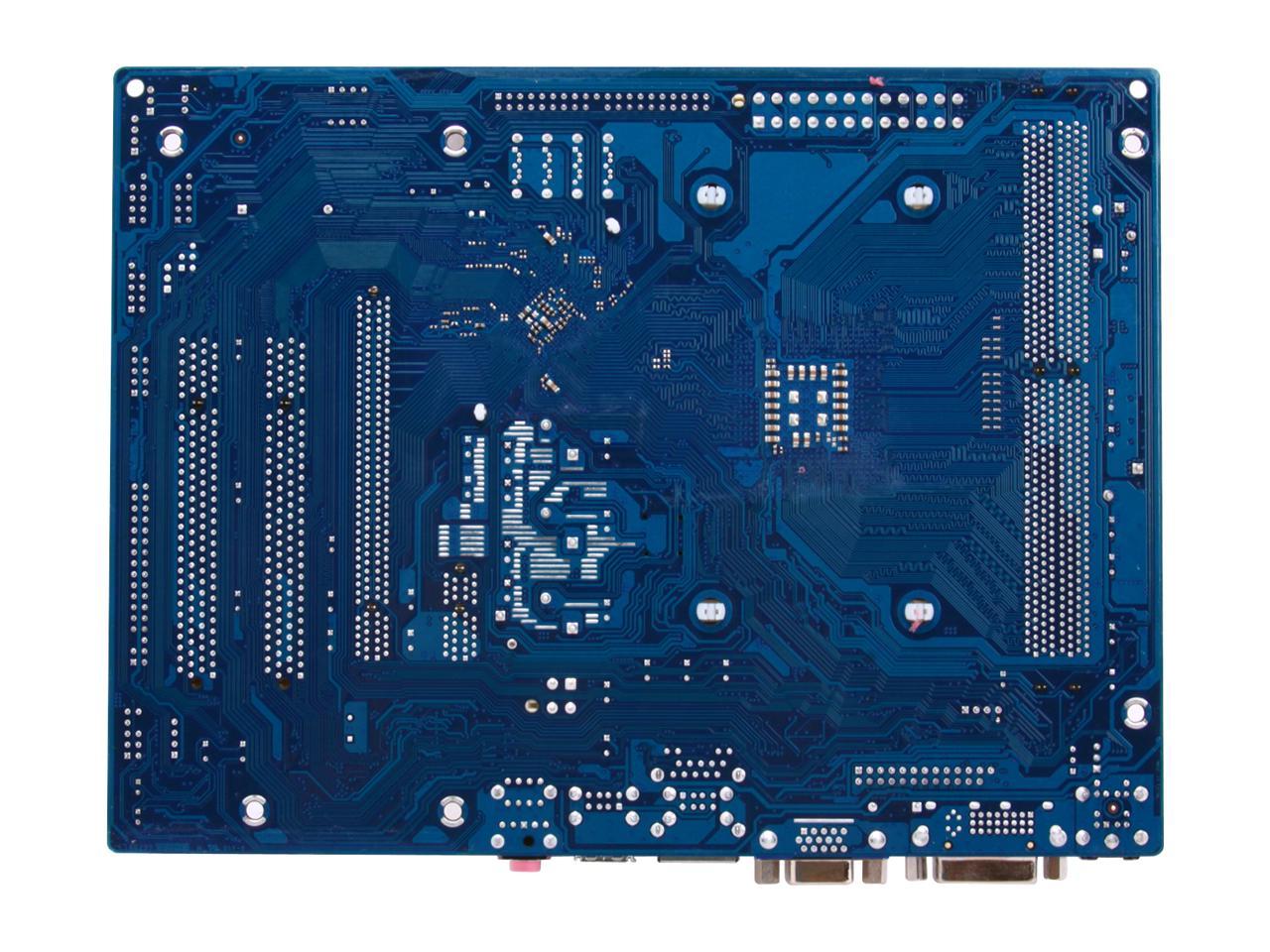 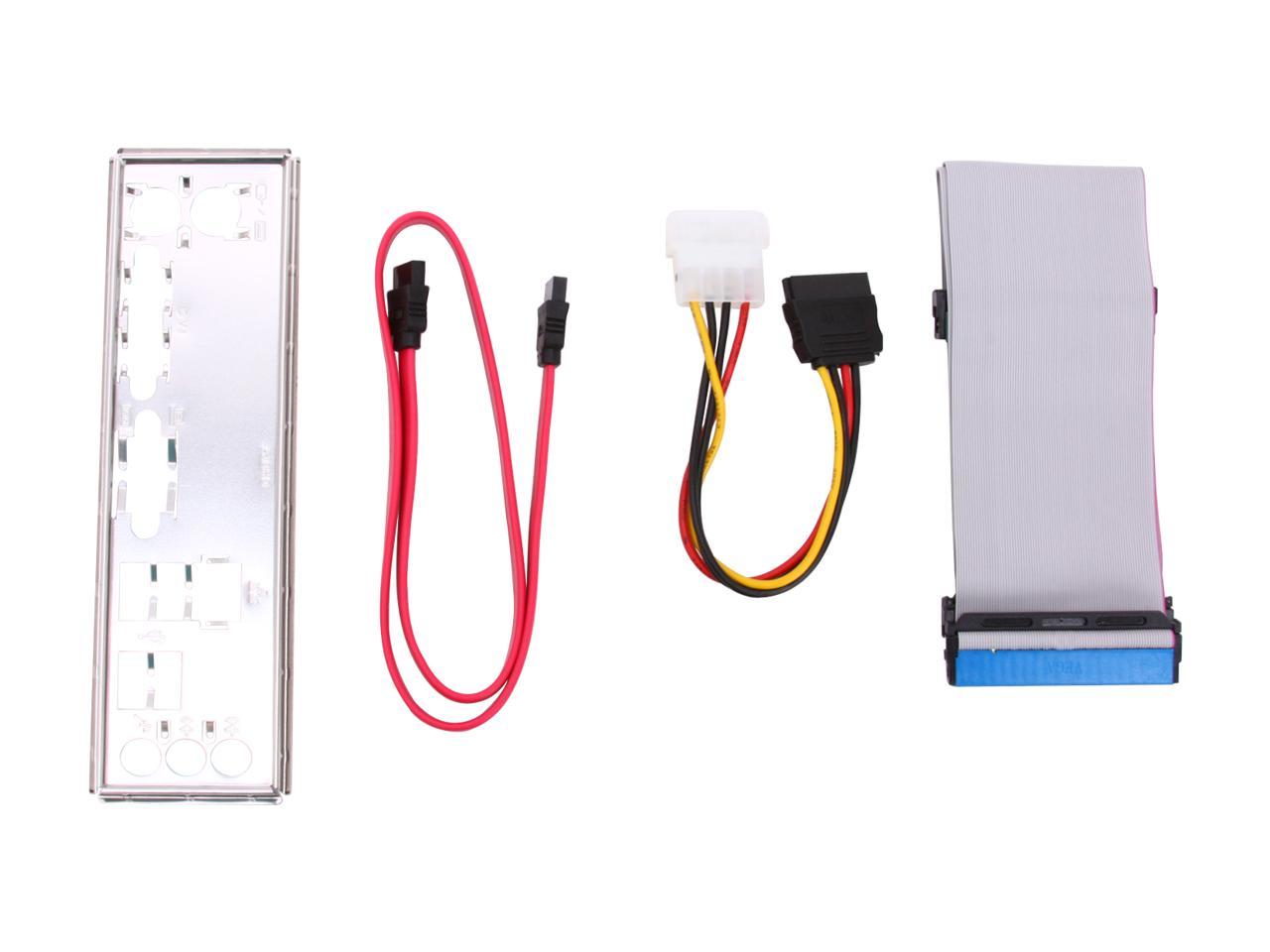 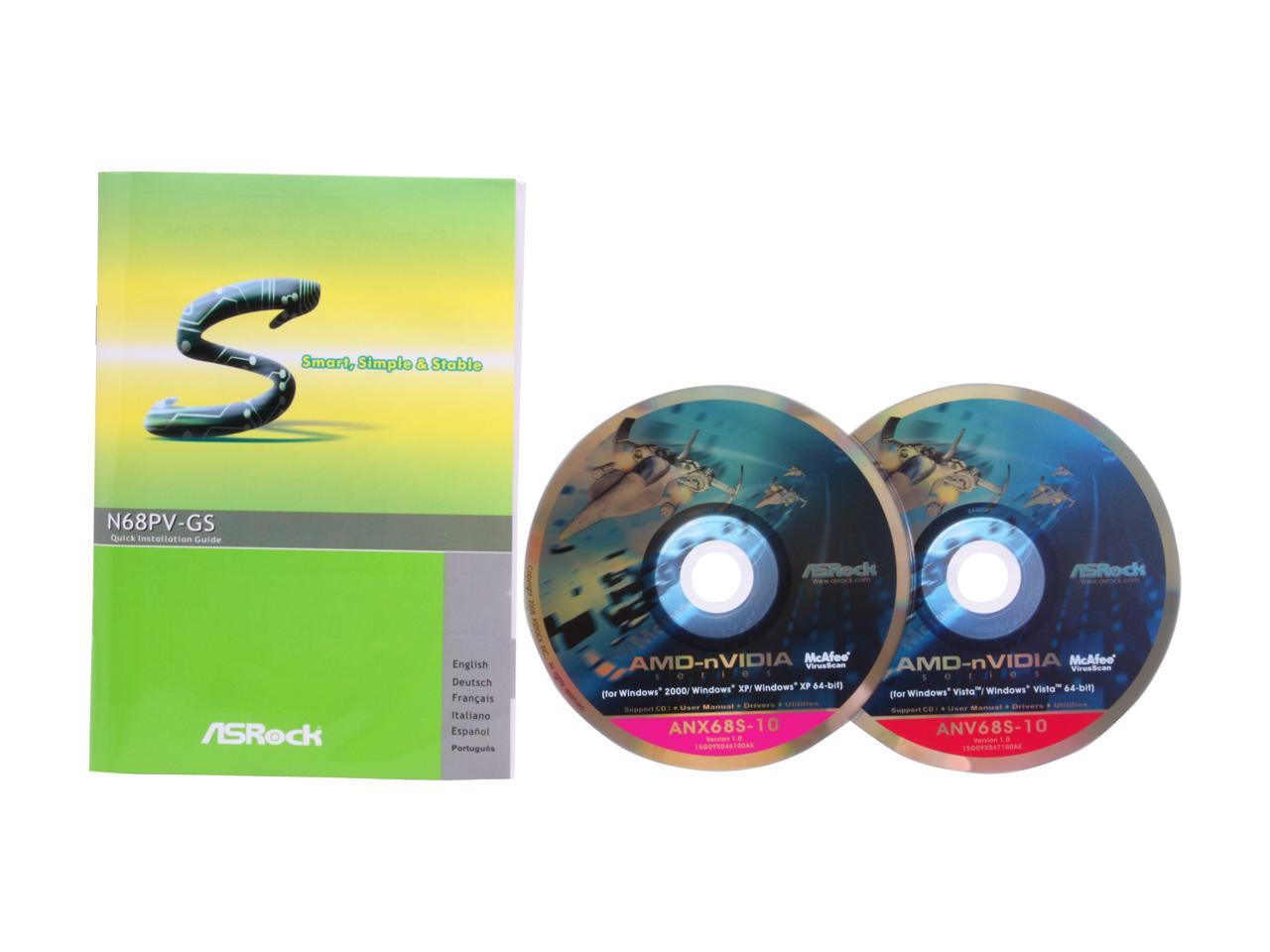 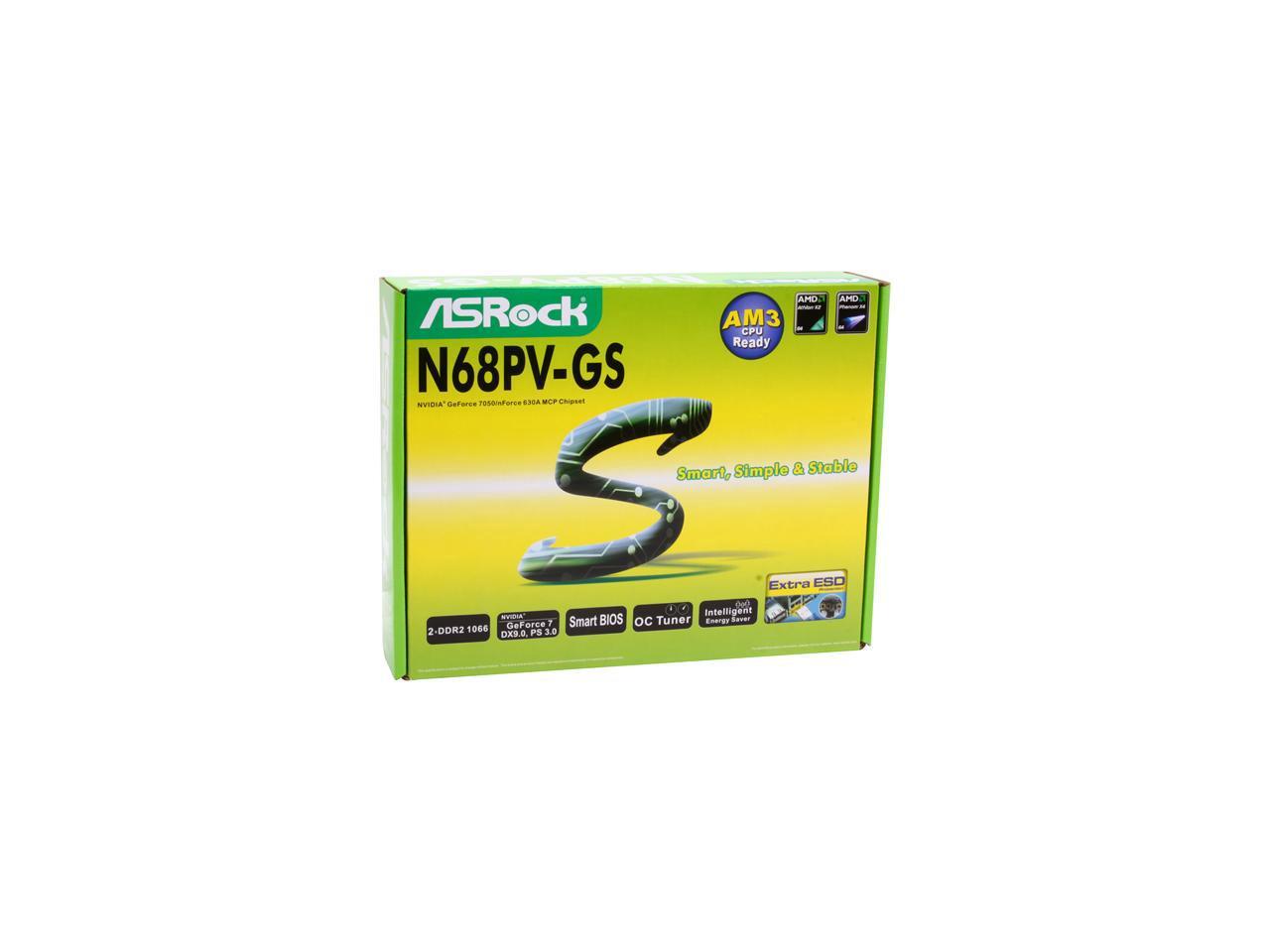 Learn more about the ASRock N68PV-GS

Pros: Worked right out of the box with 4GB Kingston DDR2-800 ram and an X2 5050e. Plenty of overclocking options in the BIOS, which is a treat for a board at this price. Works in Windows 7 using the supplied Vista driver disc and Windows Update for the 1 unknown device (built-in infrared device). Supports the 7750 Kuma and 95W AM2+/AM3 cpus.

Pros: So far BIOS has many more options than expected (TONS of memory tweaks for timings and such) and loads very quickly. Has more mobo headers and ports than I'll be using as I'm putting this in a home server.

Cons: None as yet. Has everything advertised. If you want something it doesn't have, it say in the specs and you should get a different board.

Overall Review: BIOS loads so fast it's hard to catch it sometimes. I'm only using with DDRII 800 and a sempron so can't comment on some of the more fancy hi end stuff. Appears to have no issues with linux, though I haven't tested the sound.

Pros: When they work they are quick and perform quite well with Windows XP ...

Cons: DOA motheboards -- serial numbers within a few numbers of each other probably bad batch ...

Overall Review: Quality assurance may not be what it used to be ...

Pros: none that I know of

Cons: Ordered one, came with a dead graphics card, ordered another worked for it bit then died... I'm using a GIGABYTE now

Overall Review: Newegg was fantastic through the whole thing, I really appreciate it

Pros: Very well built. The manual includes all the diagrams for the pins/connections with very clear pictures. I've built many computers before, but this is my first ASRock board. I'm pretty impressed!

Cons: Only comes with 1 sata cable.

Overall Review: This board was very easy to install. I highly recommend this, even for those new at building computers.

Cons: The integrated Nvidia GeForce 7050 useless for gaming. I was trying to be cheap and hoped it would suffice for playing WOW, but even at low settings it was too choppy. I upgraded to a MSI N94GT-MD512 GeForce 9400 GT 512MB PCI Express Video Card, and now for a budget gaming system, it freakin rocks. Had to buy a Link Depot Power Y Cable to power two fans, otherwise it would only power one fan, no biggie as cable was only a couple bucks. No eggs deducted for the preceeding comments, as this MOBO was obviously not made for gaming right out of the box, even as a budget gamer. However, if you have a Video card laying around to use, or are planning on picking up an independent card, this MOBO is fine. I had real good luck with the CPU, MOBO, and MSI Video Card combo on my build; for a budget system WOW plays great!

Overall Review: I bought this MOBO along with the aforementioned CPU. Both installed perfectly & perform fantastically. This CPU & MOBO combo were used to upgrade a 5 yr old Dell Celeron PC that was hanging out at the in-laws collecting dust. Thanks to this combo, coupled with 2 gigs of DDR2 533 RAM I had laying around from another PC, the build turned out great for a quick budget upgrade ($115 shipped) to an otherwise obsolete PC. Fortunately I was able to recycle the Hard Drive (including the XP Operating System), DVD drive, etc. Even if I had to purchase the RAM, which would have been $25 (for a combined price of $140), I couldn’t get a comparable new PC for even twice that, which made recycling the old Dell a no brainer. My ultimate goal was to create a budget gamer, & after the build was complete & the system was played for a few days, I ended up upgrading the integrated video card to the aforementioned MSI. Now I have an awesome budget system for playing WOW when bored at the in-laws.

Overall Review: I got tired of running linux on hand me down windows'98 machines and wanted to build a budget up-to-date box. I am impressed, installed Ubuntu 8.10, took about 20 minutes. virtually painless. makes me wanna say windows bub-bye! I would recommend this motherboard to anyone just building their 1st box. Hec case-newegg 2gb kingston 533 ram-from an old dell samsung sata dvd burner-newegg seagate sata 250 gig hd=dell amd x2 4000+ -left over from an upgrade Walla! -a decent box for ubuntu

Pros: cheap mobo for a buget build i put a amdx2 5200 2.7 ghz and 4 gigs of a-data pc6400 no problems doing anything well worth the price easy setup

Cons: you cant use 1066 memory unless you put a quad core in this mobo glad I went with the 800