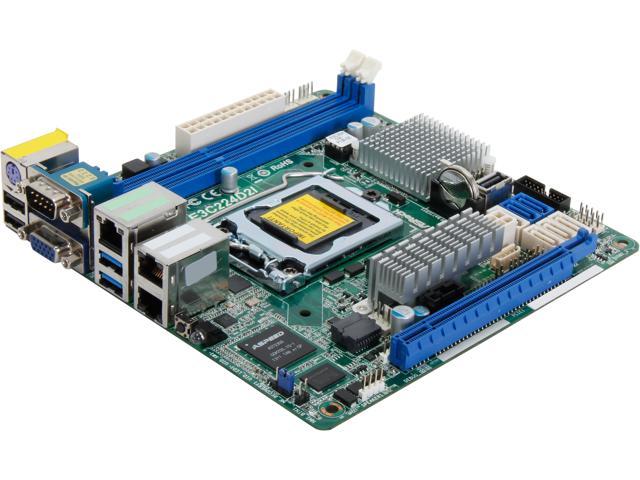 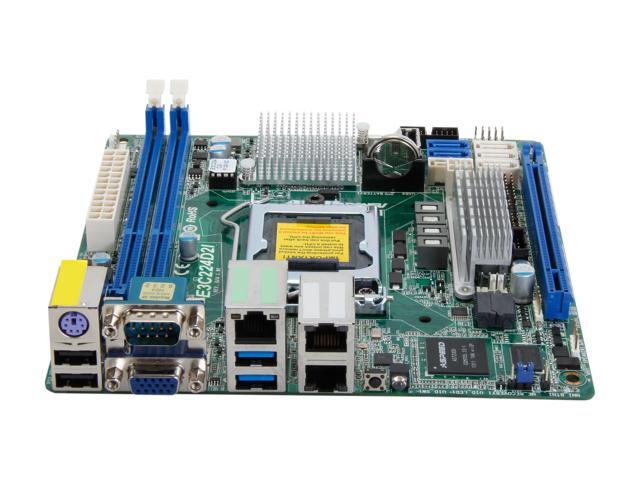 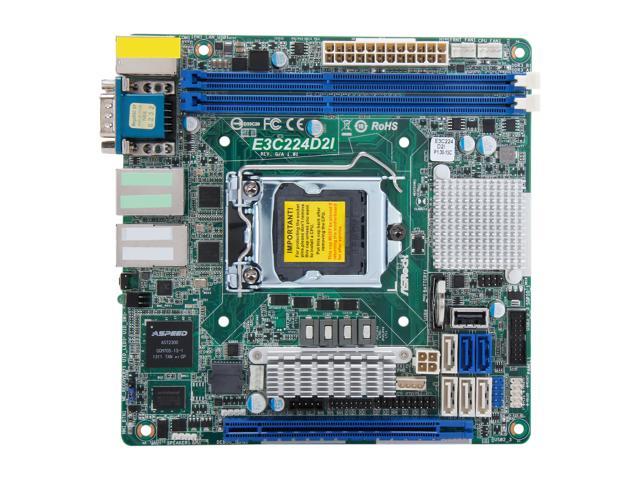 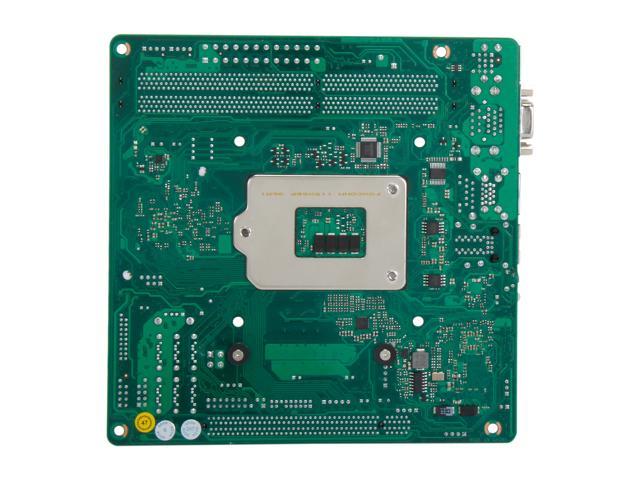 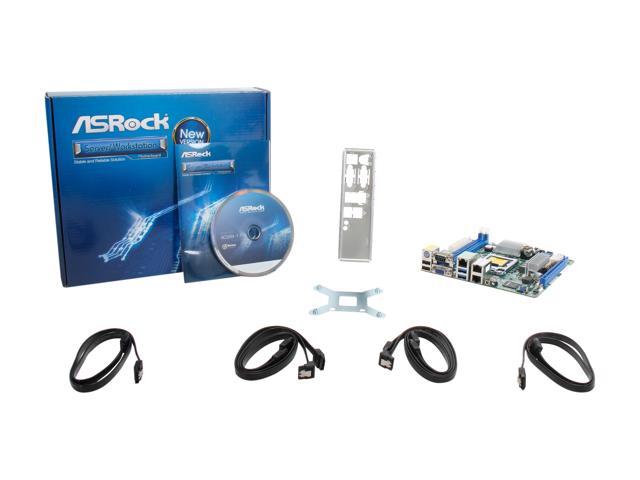 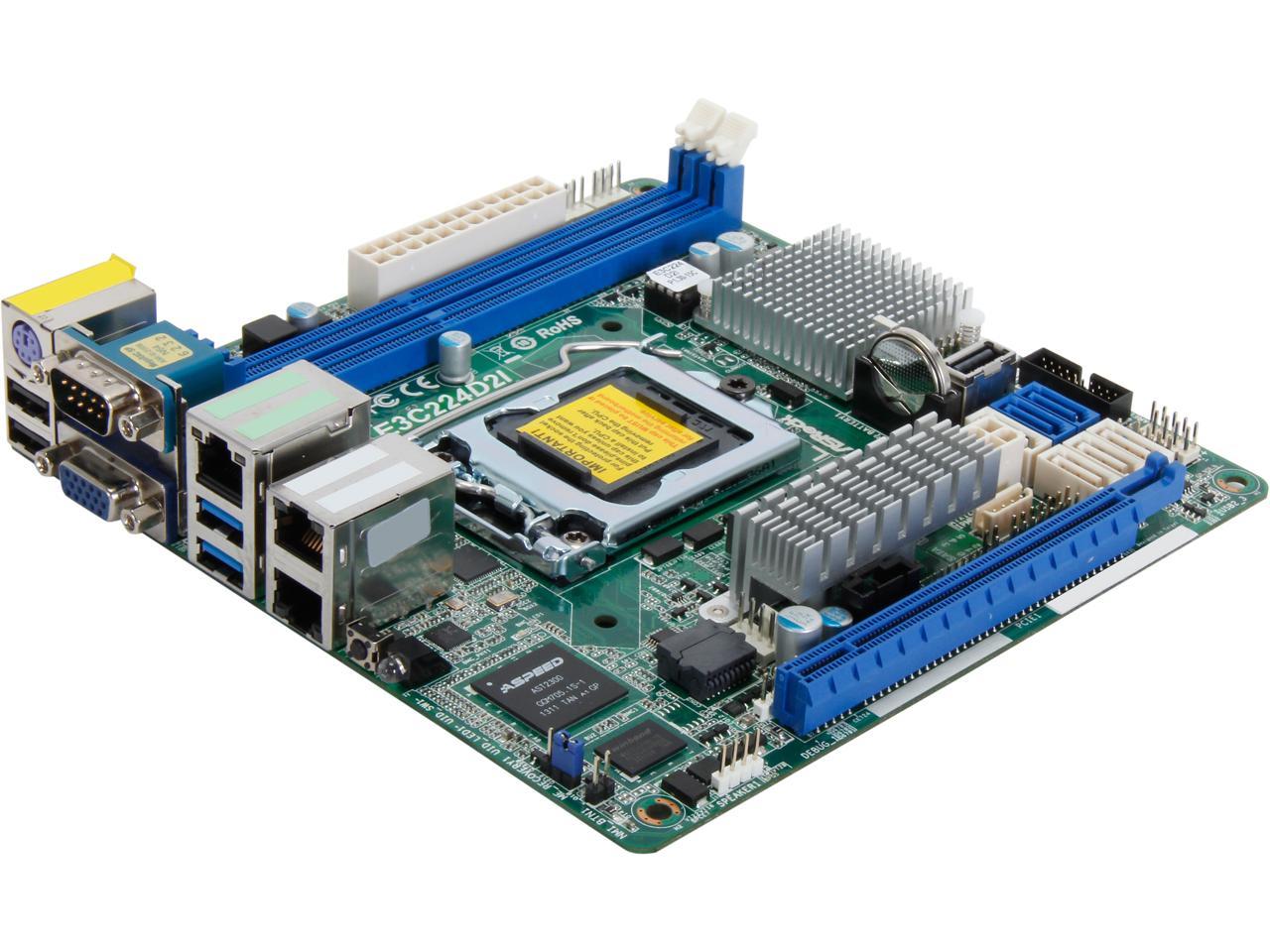 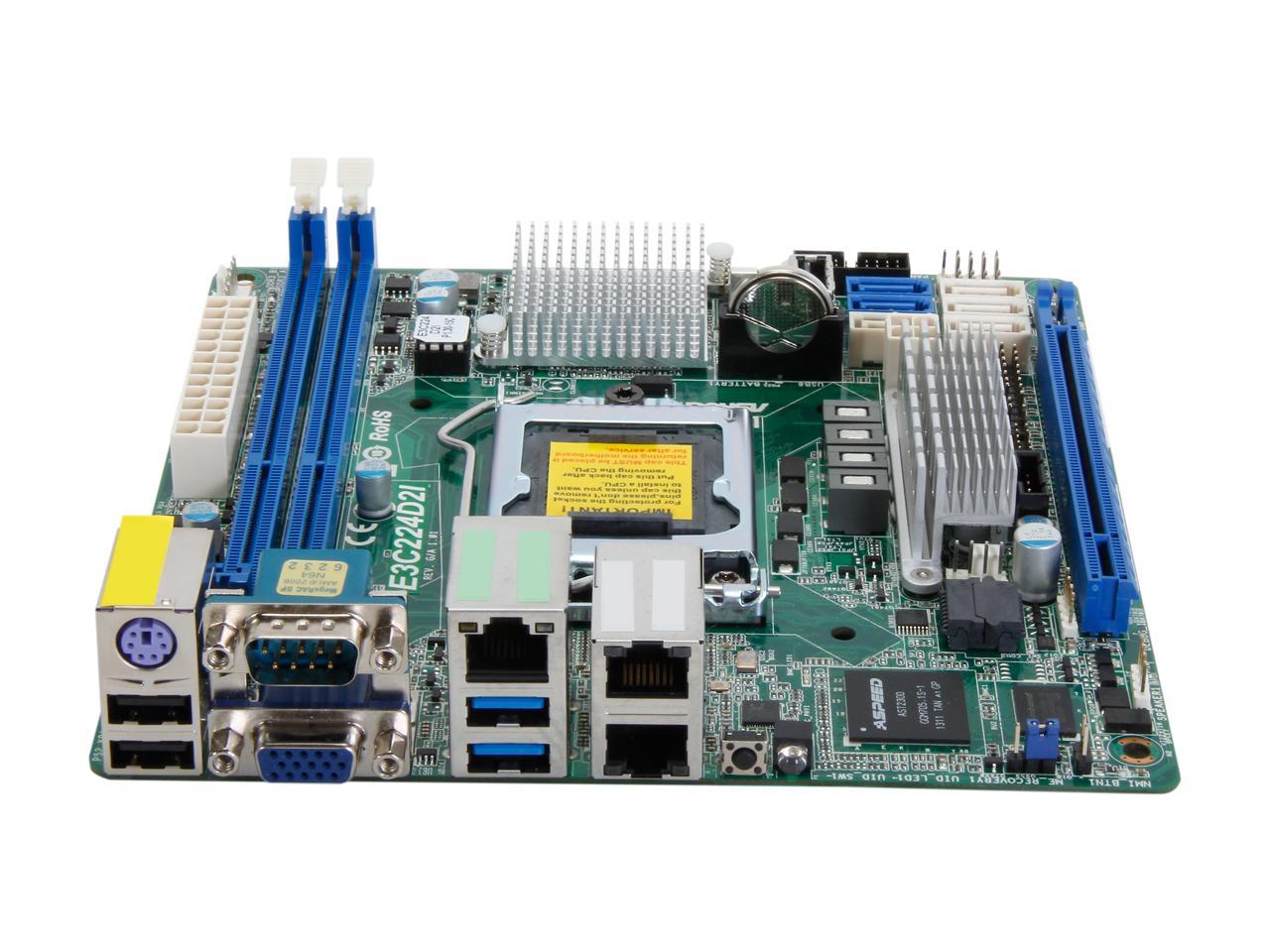 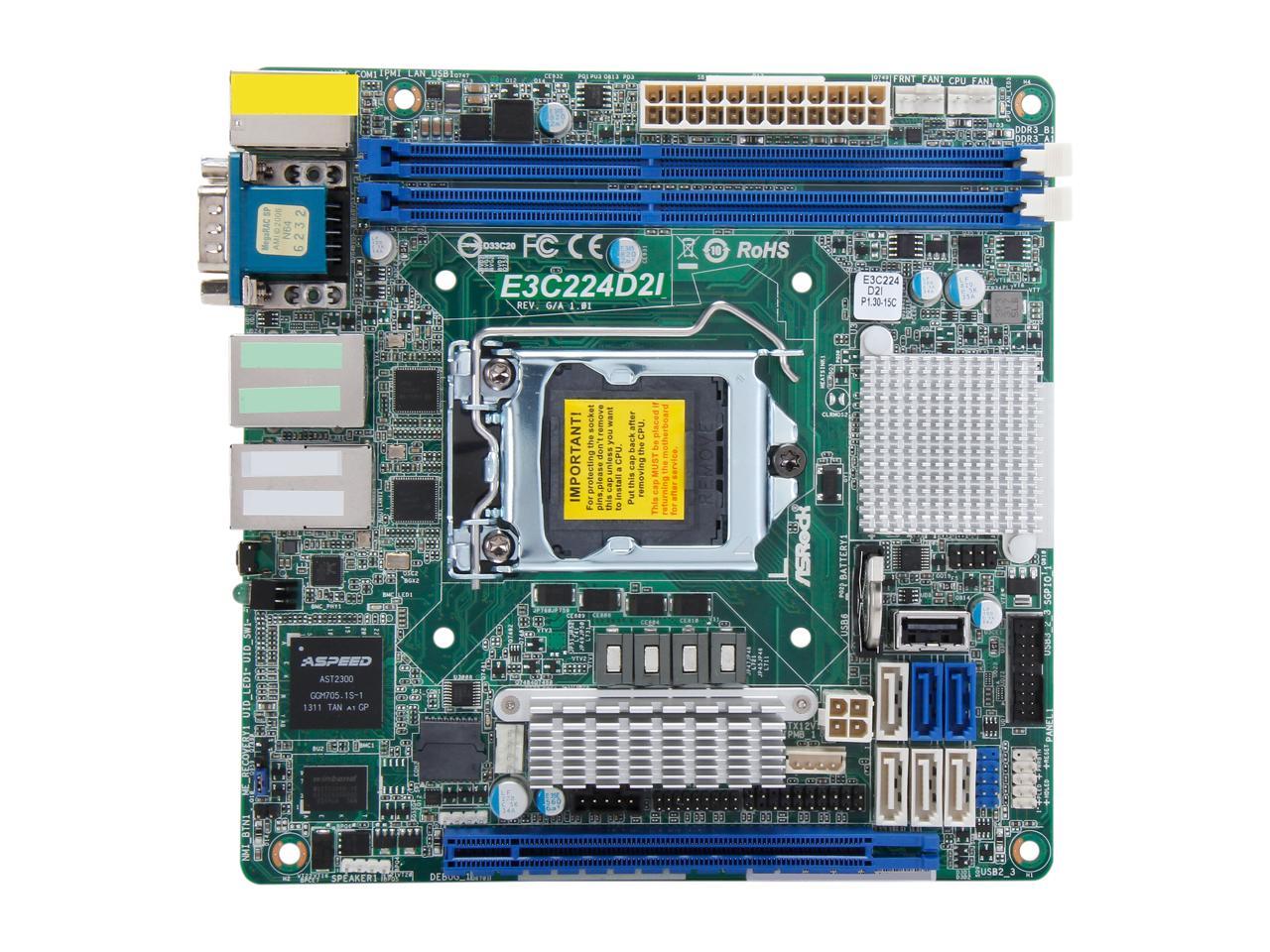 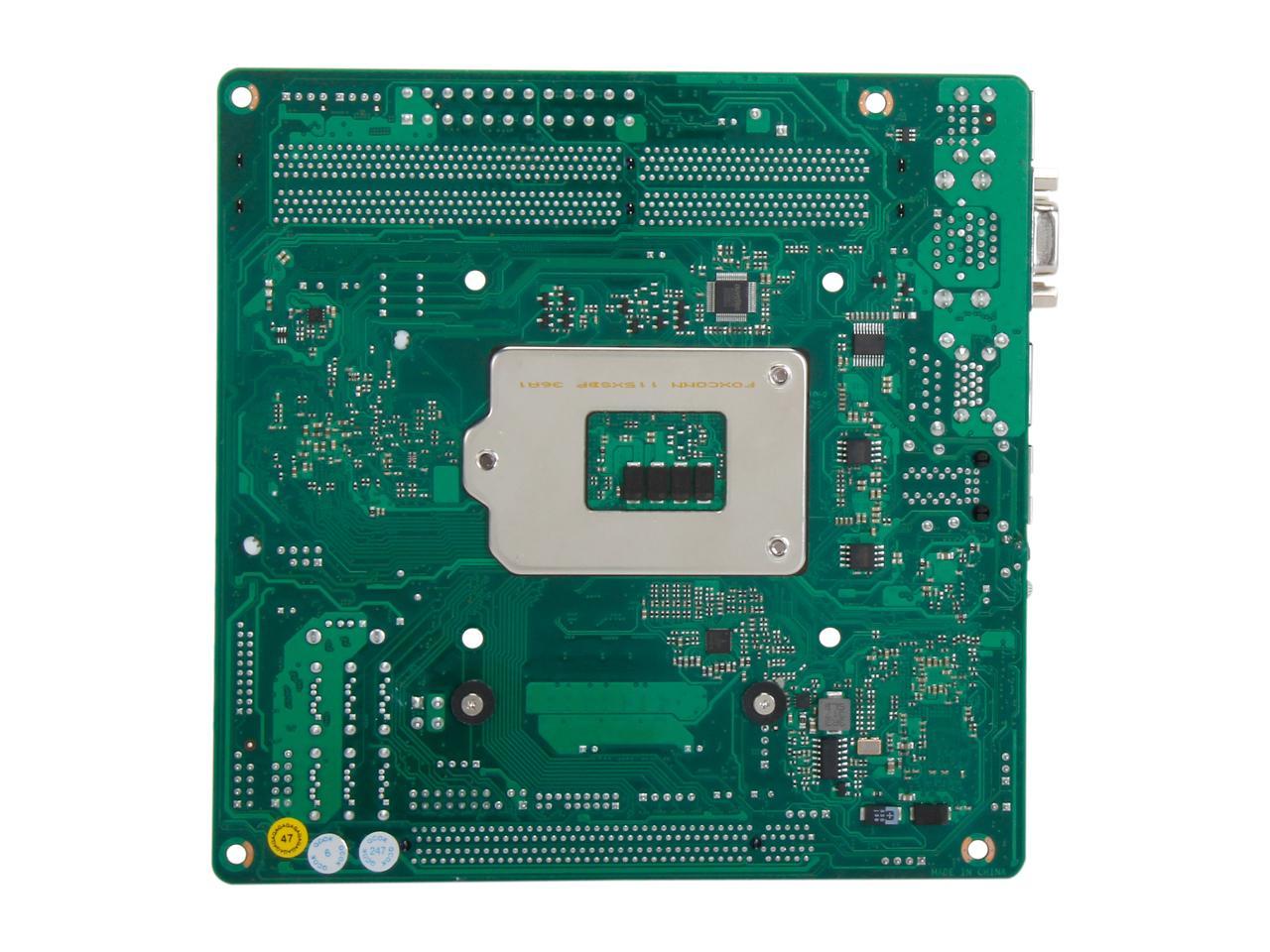 The ASRock Rack E3C224D2I Mini ITX server motherboard is ideal for small form factor NAS for high capacity file storage. It comes with four SATA 3 and two SATA 2 ports, and supports RAID 0, 1, 5, and 10. Install multiple drives and share them across the network easily. Cons: I use this board for a headless home server that I keep tucked away in a not-easily-accessible location. That means working console redirection and virtual media (features of the BMC/IPMI) are critical. This board has that, and generally it works quite well, but I believe there is a bit of refinement and polish still required. This is why I docked one egg in the overall rating. For example: as I mentioned, I deployed a system based on this board in a hard-to-reach location. But that was not a problem as the IPMI functionality made it easy to interface. However, on the computer I used to access the IPMI, I switched to AVG Anti-Virus, which actually blocks the IPMI. However, disabling some of the web-filtering features of AVG allows the IPMI to work without issue. (Arguably, this is actually an issue with AVG.) Another problem was when the web IPMI interface simply stopped working. William at ASRock tech support was able to help me get this working again. You can actually telnet or ssh into the IPMI system (default username is "sysadmin", password "superuser"). It appears to be a small Linux system. However, this system does not appear to be documented anywhere. But it seems as though it could be a quite useful tool. There are network interface bonding options in the IPMI config. However, there is only one dedicated interface for IPMI; the other two interfaces are presumably only for the OS. So bonding makes no sense in this context... everything works, so maybe it's OK, but it annoys me a little that there is no explanation for this. Overall, the cons basically annoyances, not deal-breakers. I would have docked another egg if it wasn't for the excellent support I've received from ASRock. I reserve five eggs for a truly perfect-in-every-way product. My experience with this motherboard is that it's just shy of perfect, so I can't give it the full five eggs.

Overall Review: I use this for an all-in-one home server that acts as: - A file server (using Linux software raid) - A Linux development server - MythTV backend (open source DVR) - An MPD (music player daemon) server for my whole-house sound system (no built-in audio on this board, but works fine with a HiFiMeDIY USB DAC) Build is: - ASRock e3c224d2i motherboard (of course!) - Xeon E3-1230v3 - Noctua NH-L9i heatsink/fan - Seasonic SS-300M1U power supply - U-NAS NSC-800 DIY NAS chassis - IBM M1050 RAID card (flashed to "IT" mode to be a pure HBA) - Two Intel SSDs in RAID-1 for OS and user home directories - Five 3TB 5400 RPM 3.5 HDDs in Linux software RAID-6 - One 3TB 5400 RPM 3.5 HDD for MythTV recordings - 2x8GB (16GB total) Crucial ECC RAM I actually run the CPU with only two cores enabled, and TurboBoost disabled. These settings are designed to act as a safety measure against possible overheating. (I am basically artificially lowering the CPU's TDP.) The NSC-800 chassis is *very* compact, so I'm being over-cautious in the interest of making overheating virtually impossible. Even with these deliberately lower-performance settings, the system is more than adequate for my needs. Once again, I want to openly thank William at ASRock for the excellent support he's provided.

Overall Review: Paired with an Intel Xeon E3-1220V3 and 16 GB ECC RAM. No performance issues at all in a FreeNAS system.

Overall Review: The Build is: XEON E3 1220V3 ASRock E3C224D2I Crucial 8GBx2 CL9 ECC Silverstone ST45SF-G SanDisk Cruzer Fit 8 GB FreeNAS I have to say though, William (Will) at tech support was extremely helpful. I had an issue with my first mobo which he took the time to help me troubleshoot and followed up on. Really impressed. My replacement was fast and everything is good.

Pros: Good specs for a FreeNAS build. Mini ITX, but still has an 1150 socket. 16GB of RAM is good for a decent sized pool.

Cons: - Instructions on using IPMI interface poor for an IPMI novice such as myself. I initially thought the board was dead, and only after plugging it into my router and checking the IP address assigned to it, was I able to attach to the web interface and power on the board. Overall quality of the IPMI documentation is mediocre.

Overall Review: I had originally ordered the Supermicro X10SLM+-F, which is a micro-ATX form factor, but then found this mini-ITX board and returned the Supermicro board. Once I got the board powered up, it has been running flawlesssly since. I was a bit unsure about the RAM as the ASRock site didn't explicitly list Kingston KVR16LE11S8/4 sticks (1.35V ECC) as supported, but I have had no issues with them. I'm using an i3-4130T CPU.

Pros: This is a great buy. No need to go into detail on features, but this is a great home server board. Several case "smart" fan connectors, IPMI, ECC, dual LAN, internal USB are all premium features if you use it in this role. Top of the line premium support (see "other thoughts").

Cons: Had an issue where board refused to POST after 9 months

Overall Review: Let me join the chorus of praises for William at ASRock Rack. I had an issue where my board wouldn't post after humming merrily along in near 24/7 operation for 9 months. To further complicate things, I am living in Europe and was concerned about the extra challenges that might entail. I needn't have worried. Raising a ticket through the website brought William into my life, and let me assure you that he offers a level of support that is exceedingly rare. Friendly, courteous, intelligent, insightful and ultra-responsive are all accurate descriptors. William and I had a string of around 25 emails over the span of a couple of weeks. Most of my emails to him were turned around within an hour, if not minutes. He liaised with the ASRock Europe team to get some new BIOS and BMC chips to me, which were at my doorstep within a few days. After Will guided me through the process of flashing the MAC addresses on, I was good to go. No one enjoys tech problems, especially not on a home server rig that serves as a central filing system / repository. But stuff happens, and it's how a company responds that really determines their reputation and whether they will earn repeat business. I was thoroughly impressed with ASRock support, specifically with William from ASRock Rack. Would definitely recommend this product without hesitation and I will be buying more from them in the future!

Cons: HDMI would have been nice, just because. The company that manufactures this board have said this is in the pipeline for future models. Not a deal breaker for me, but would have been good for the flexibility.