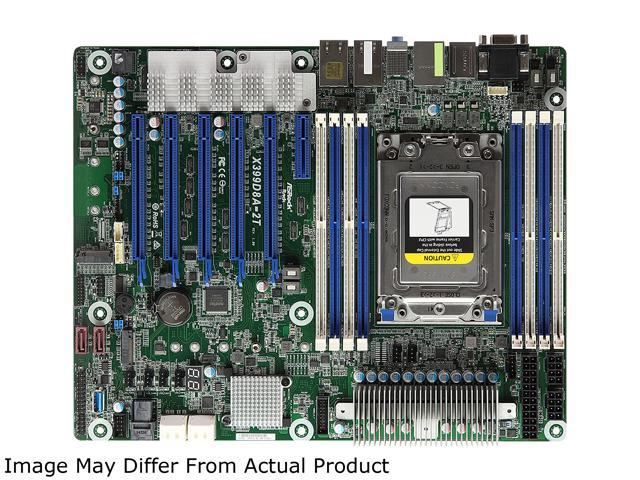 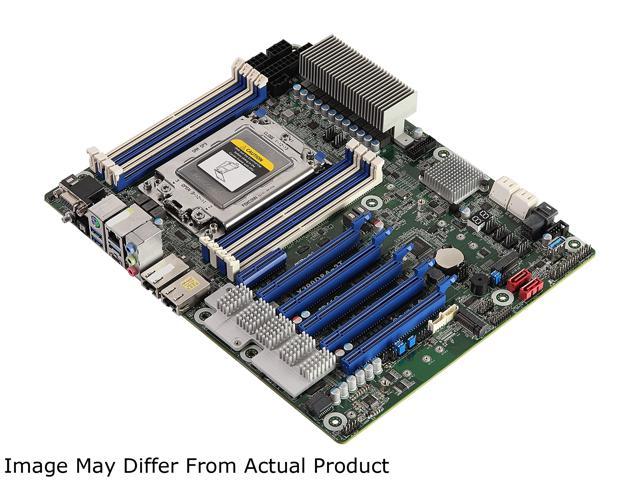 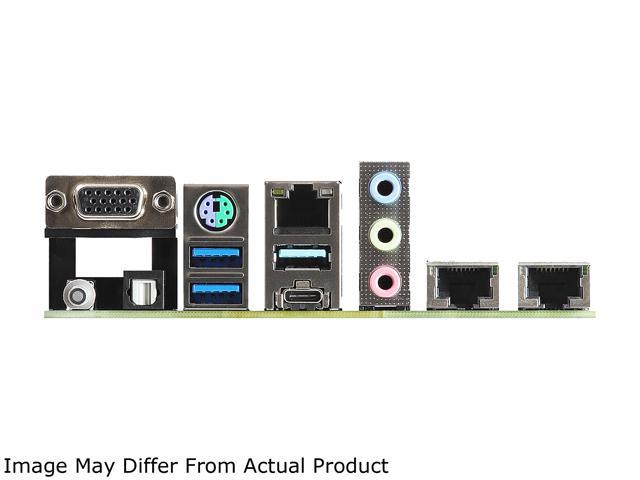 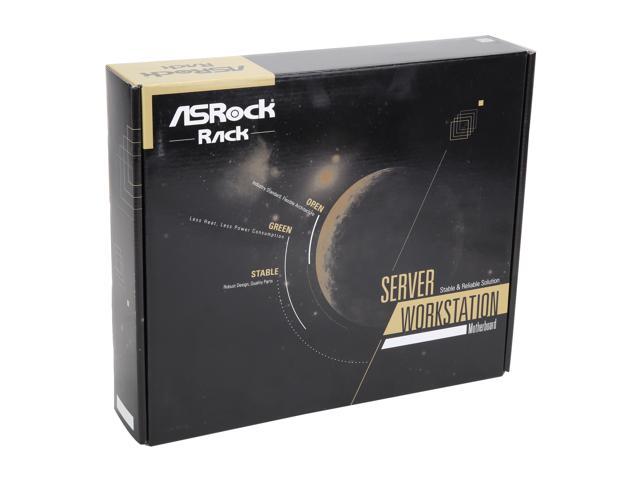 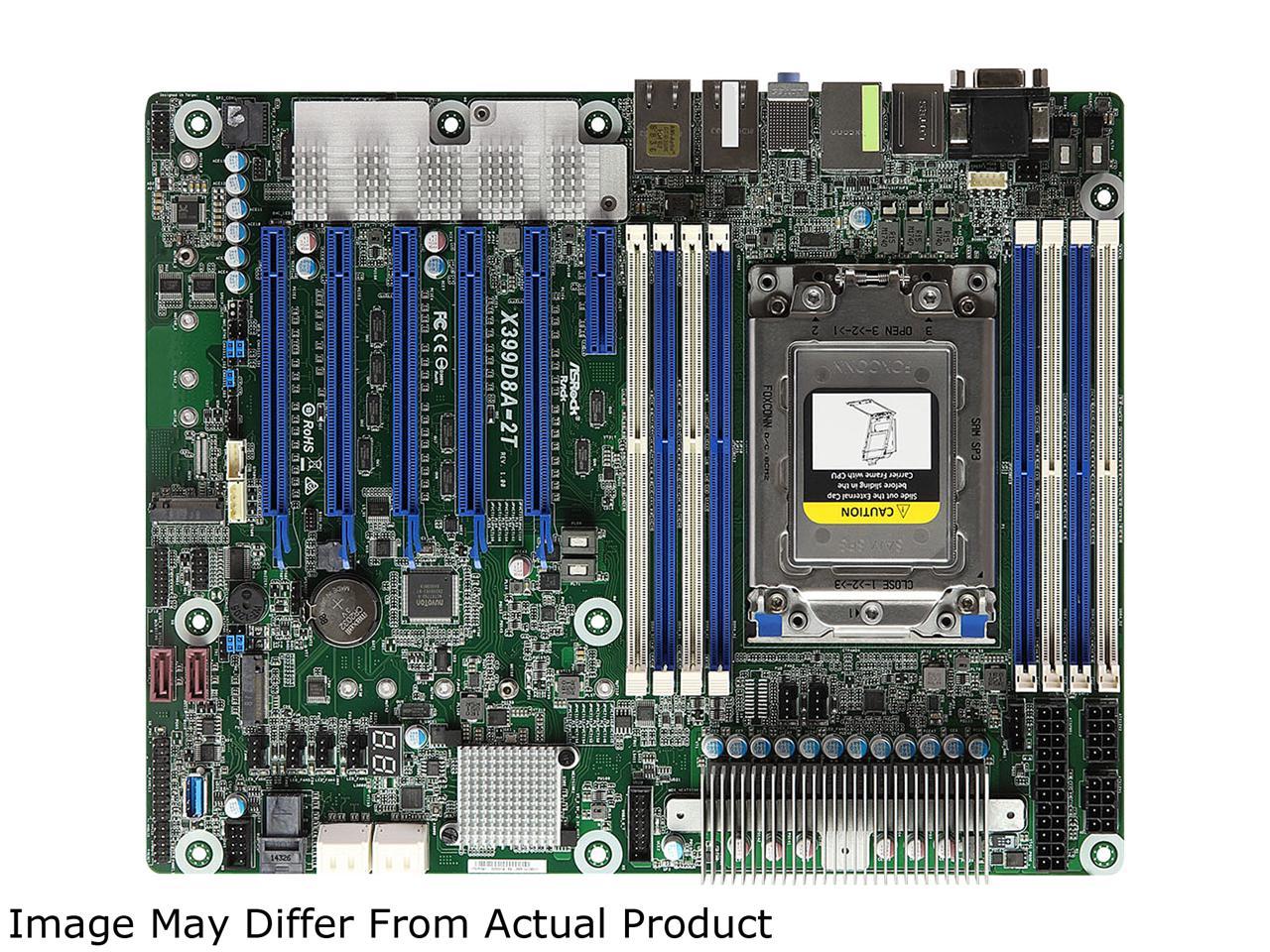 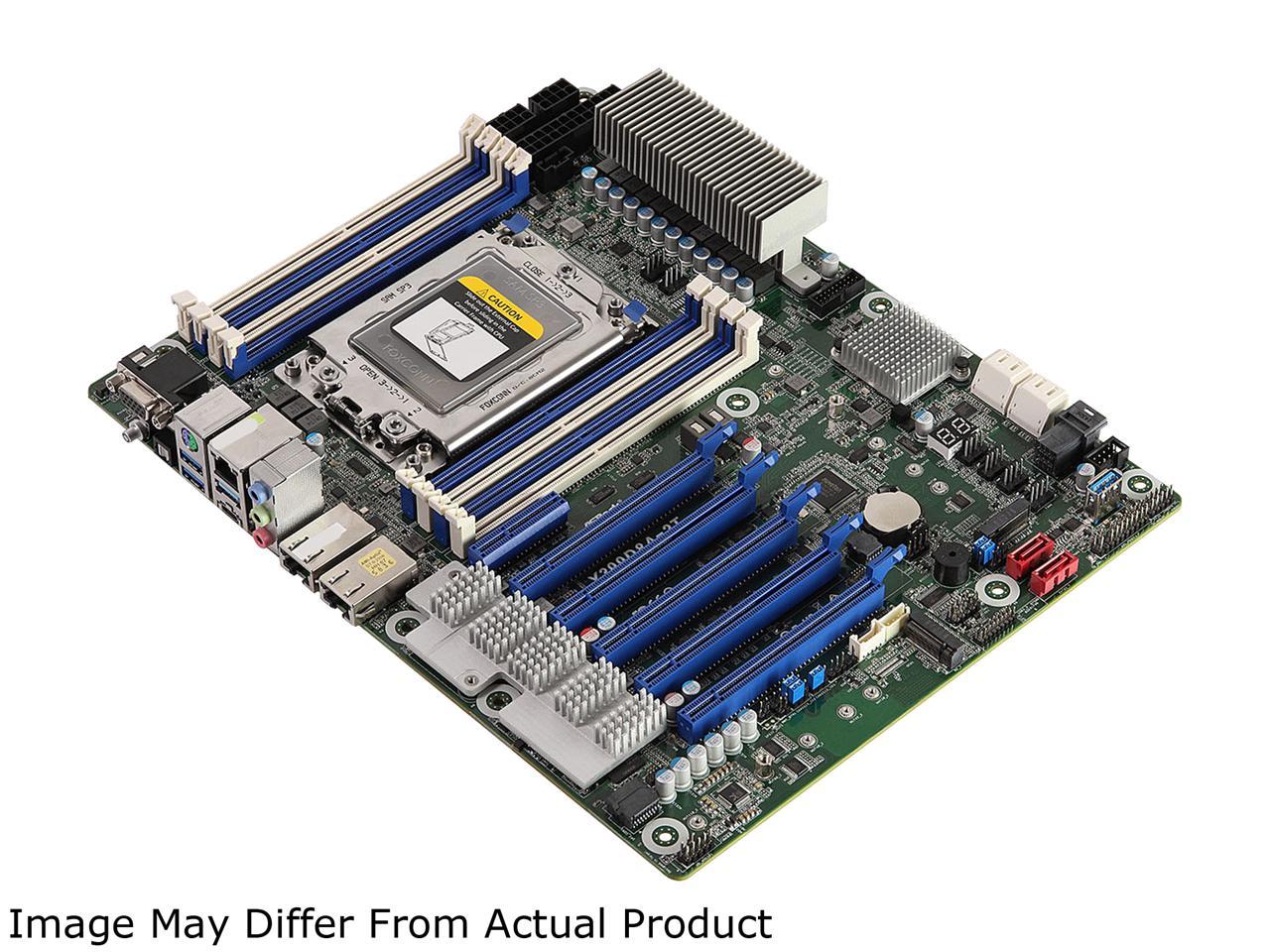 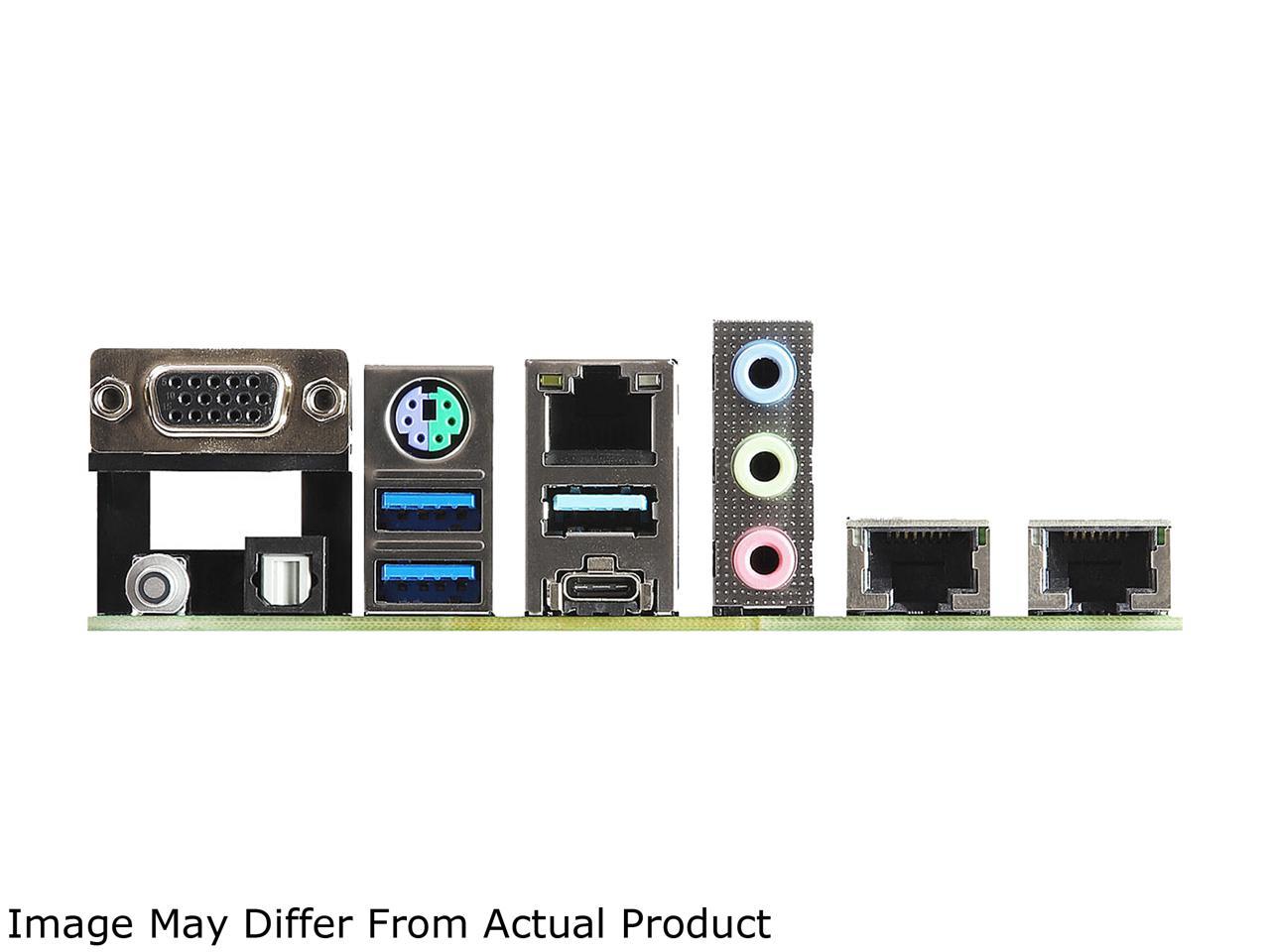 Pros: - BMC IPMI -- you don't need a monitor to even set it up! - VGA on board! No PCIE lanes sacrificed on a video card, great if you need tons of storage - Twin 10G (RJ45) ethernet ports! - Internal sensors connectivity (chassis panel, PSU, etc) - Only real option for the x399 platform in 2021 - free (as in beer) remote monitoring software directly from AsRock (for linux and windows at least) - Most important of all, stable as a rock, and with BIOS features beyond any level of expertise

Cons: - None really. I think this motherboard is close to as 5 eggs as it can get. But I'll bite and mention negative issues (which aren't worth taking an egg off): - Hard to get (always out of stock) - No 1st tier support, in the sense of there is no 1-800 number or chat feature in which you can talk to an engineer and ask him to walk you through error codes, or BIOS setting, or any other issue. - As with any motherboard, it cannot possibly offer ALL features, so I am sure if you dig deep enough you can find a feature that is missing. - This may be controversial for some, but for some enterprise clients, they may want support for Microsoft Windows Server out of the box and a tight integration at that, this motherboard may not fulfill that. I did not test this under Windows, but it is my understanding that the motherboard doesn't have ALL drivers for all features under that OS.

Overall Review: I think this board is quite famous already in server system builders circles (at least the brand). I was surprised to see only one review and a one-egg review at that. I usually don't review purchases, but this one seems like a no-brainer and I do think the one egg rating is unfair to the product. Overall, I give this board 5 eggs and can provide some more perspective as HEDT system builder. I do not build servers, I have built several High End DeskTops through the years and modified others. Air cooled, watercooled, overclocked, fitted with GPUs, fitted with storage, you name it, but mainly X470 (Ryzen 2 and on) and X399 (Threadripper 2 and on) desktops. I have purposed some of them as servers for storage mainly. I believe at the time of these Zen 2 platforms launch is when AsRock Rack started releasing these server motherboards. I think before that the only other alternative was SuperMicro., but I don't think they did any Zen 1 motherboards. From talking to other server system builders, AsRock Rack has been a welcome addition. From my perspective, the X399 platform was one of those true innovations that you would see performance (computing, pcie lanes and memory capacity) jump over previous AMD generation. However, I built systems around Gigabyte Xtreme X399 motherboards and from the 5 systems I built, 4 motherboards went belly up. I sent them to be repaired via warranty to their California facility only for them to fail again. Since I was happy with the platform and the systems as they were, I just looked for another vendor. At this point in time (2021) the only choices for new motherboards are really AsRock (Taichi) and AsRock Rack. I can recommend both, but this one really is high end in server features. I had no true hardware issues setting it up. It didn't go smoothly as other motherboards, but I attribute it to user error as far as I can tell. For example, I set it up with one ethernet connection via a single RJ45 cable and I was able to see the IPMI info as well as the regular X399 server traffic on two different IP addresses (which I knew you could do). However, while I was setting up hardware (fans, nvme's, water pump, memory, etc) I could no longer see the regular IP traffic of the server after a couple of restarts. I was also getting random restarts. After investigating a bit, I turned off PBO (CPU overclocking!), c states (power saving motherboard states), removed energy saving PSU states and removed the XMP memory profile (and memory was downclocked below its speed rating) and changed the RJ45 cable to the other one and connected a new RJ45 cable to the BMC info on a different hardware hub and all was dandy. Some of other hiccups I ran into: memory I put in was from a desktop. It is rated at 1.35v and was not ECC, (I know, sacrilege) and indeed the sensors complained that the voltage was too high (at 1.35v) andthe server would re-start randomly and give memory errors. OK, lesson learned and downclocked and undervolted the memory and the issues went away. Another issue was network traffic. I saw the BIOS setup correctly and IP addresses as well, but once I booted into linux ubuntu (20) the network ethernet card was having trouble started. I am not sure why. So I changed the cable to other onse and also connected a cable to the BMC IPMI controller and the issue went away. I know most people hate RGB, but just in case, the memory had RGB lighting and it was preserved in the server at time of install and ran correctly. I know, useless, but just in case someone is curious. The waterpump is PWM and worked without issues and reports RPMs correctly through the sensors service and ramps up when processor is used, as it should. I was also playing around with many different Nvidia cards I had laying around. I inadvertently put one in an x8 pcie slot instead of x16 and the motherboard immediately reported it as running degraded... I thought that was very cool and useful. I can see that once you go IPMI, you truly will never go back. There are tons of features I probably will not use, including all sensors (chassis open sensor, chassis light, hardware IPMI interaction) and many more features, including PCIE bifurcation X16 -> x4x4x4x4 . and overclocking. And just to be absolutely clear, the memory I had laying around was not in the QVL (Qualified Vendor List) but it was not only recognized-- but overclockable according to it own timings. It was not Samsung b-die, so decided to stay away from it for now. I am having a hard time trying to understand why some folks would not like this board, and the only answer I can come up with is if you are pressured for time in a corporate environment and you get a lemon, yes you will be left out in the cold. Especially accessing the features in a Windows OS. Otherwise, happy server building. Don't hesitate, the rumors are true, this is truly a revolutionizing server board.

Cons: The system won't boot. with simple CPU/RAM installation; the system won't boot. I've built many machines before, including an Epyc server which uses the same package as a Threadripper, so it is not user error. Something buggy going on and no phone number to call tech support.

Overall Review: I'd be happy if it actually worked.

Manufacturer Response:
Hi Dave, Won’t boot as in Power On Failure (fan not spinning) or POST Failure (fan spinning)? This board uses Threadripper CPU, EPYC CPU won’t work. Do you also know if you are using UDIMM or RDIMM? There are many circumstances to potentially cause the board not working properly and we do need more information from you before making a statement or come to a conclusion. Our Technical Support page is always online as everyone is reaching out at http://event.asrockrack.com/tsd.asp . Please contact us if you have any technical question. Thank you! ASRock Rack Support Email: https://event.asrock.com/tsd.asp