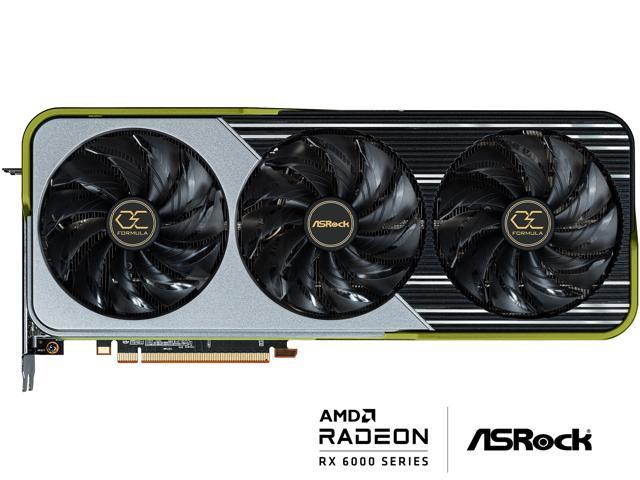 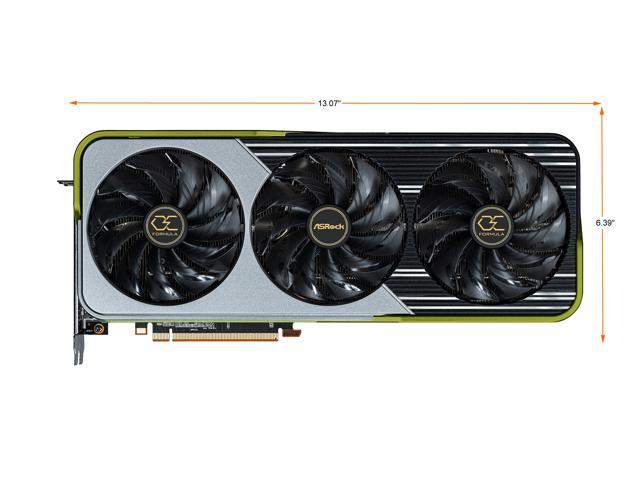 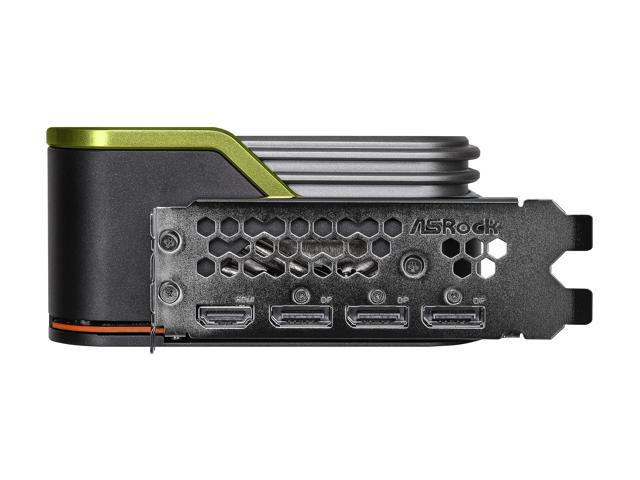 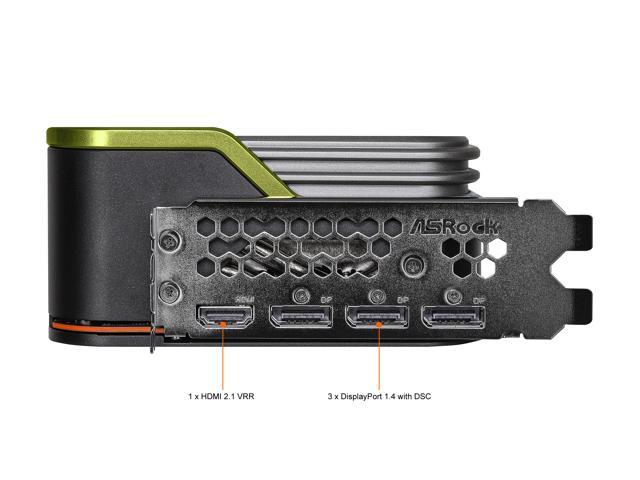 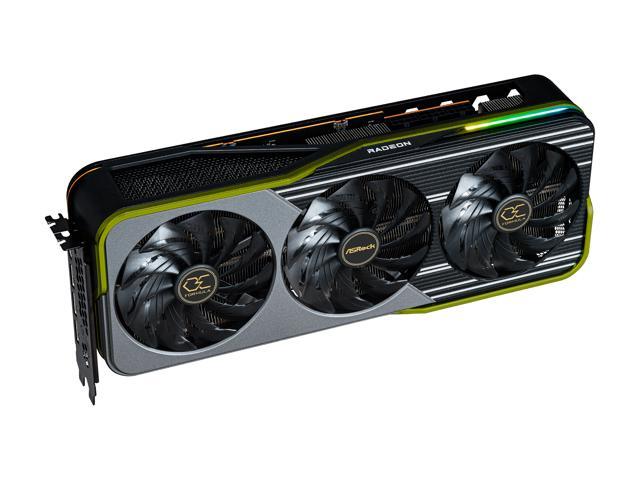 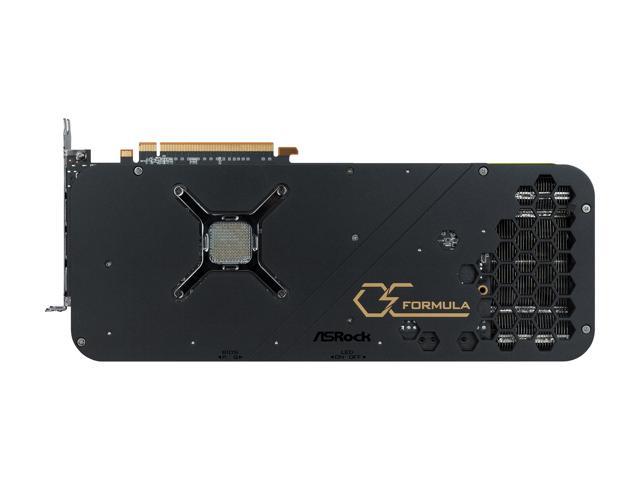 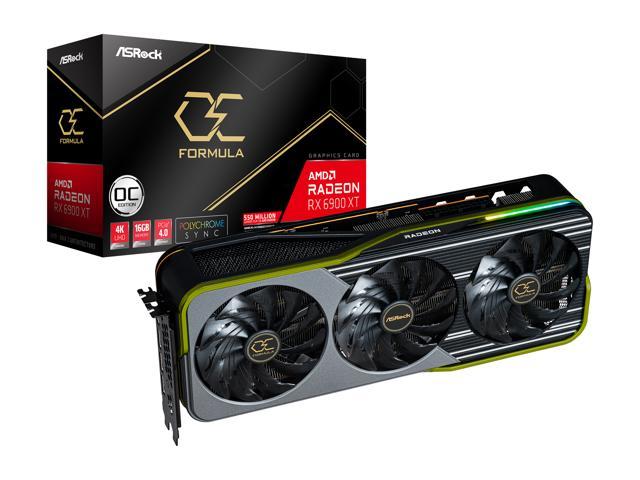 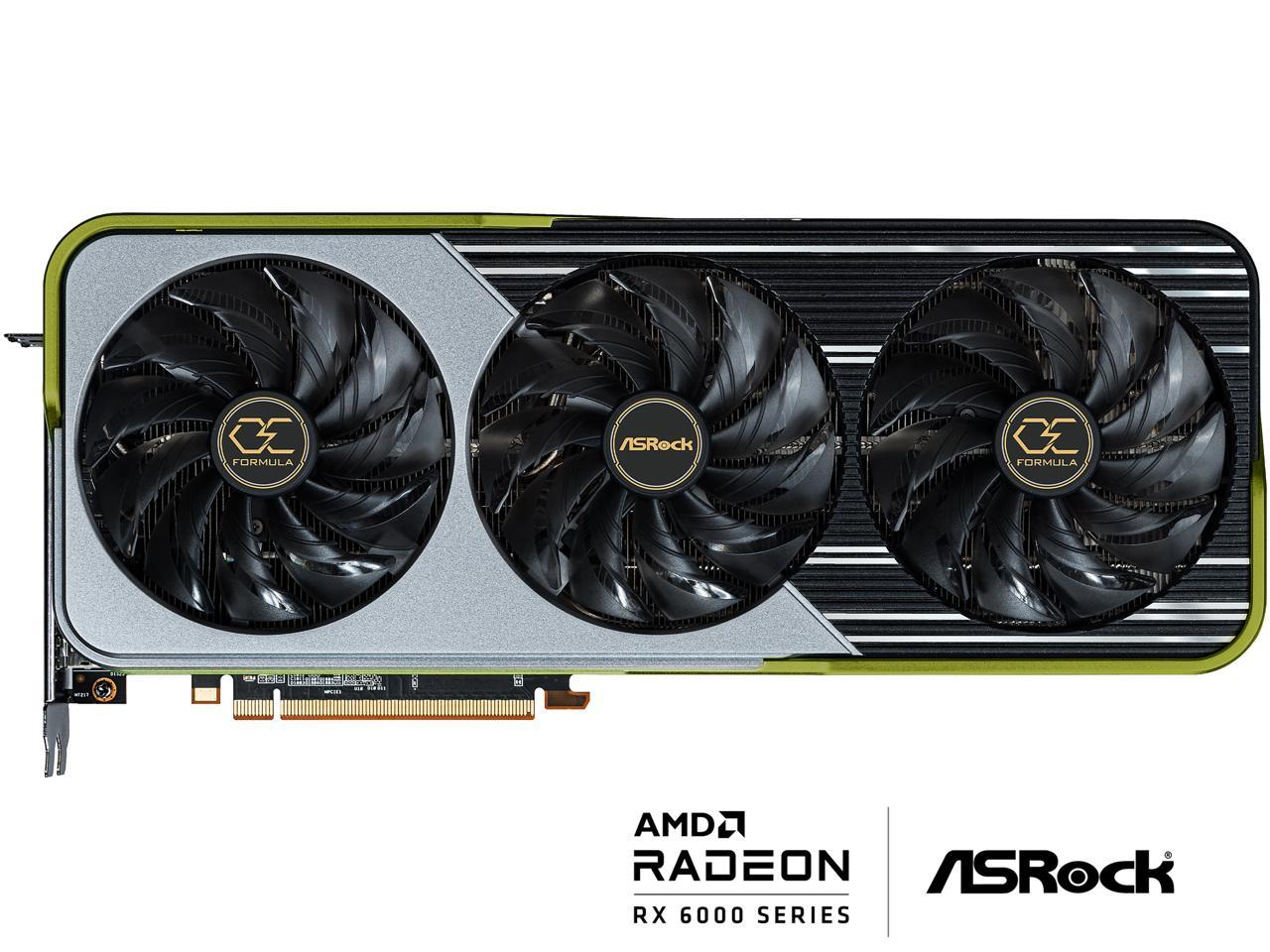 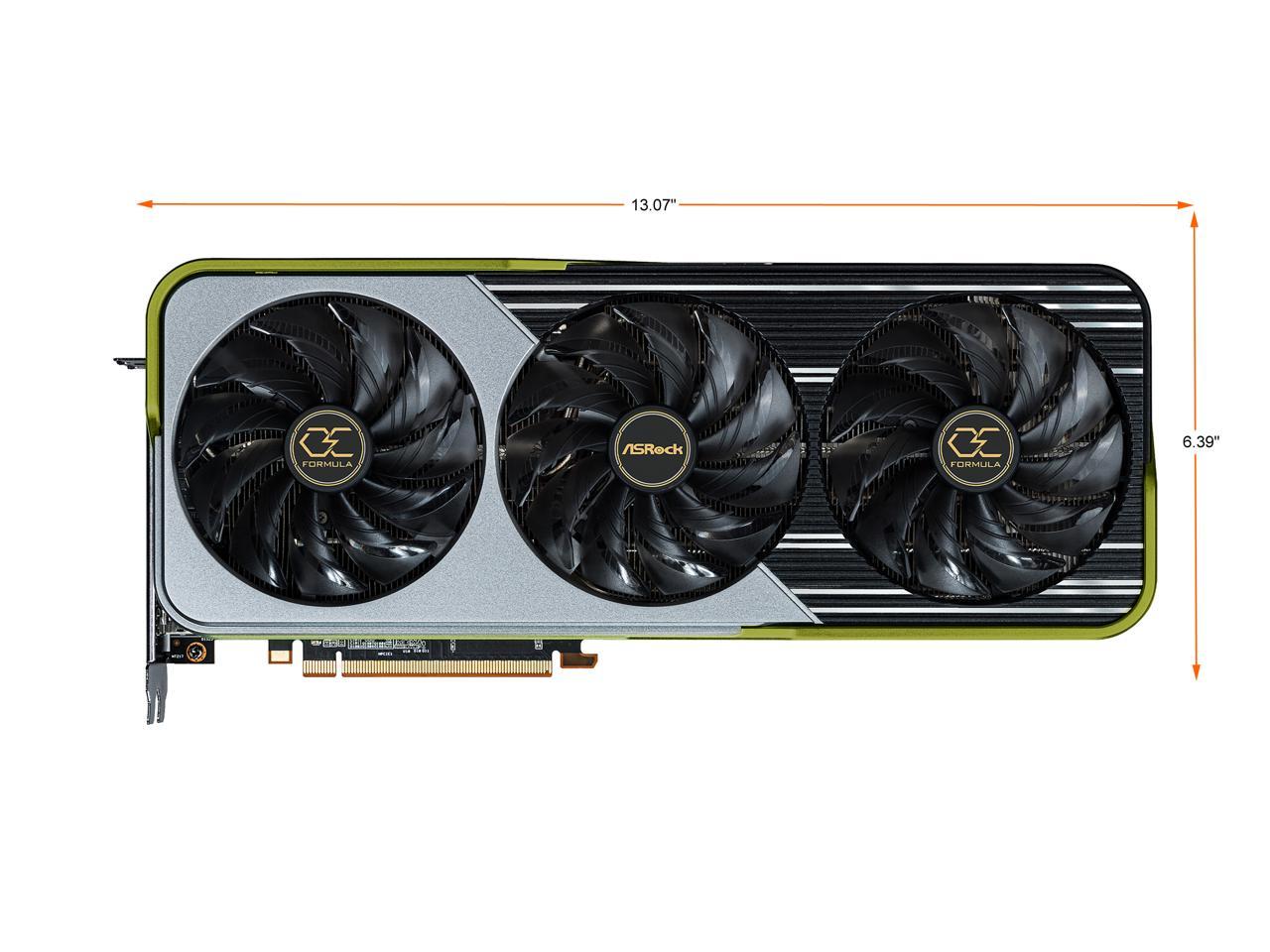 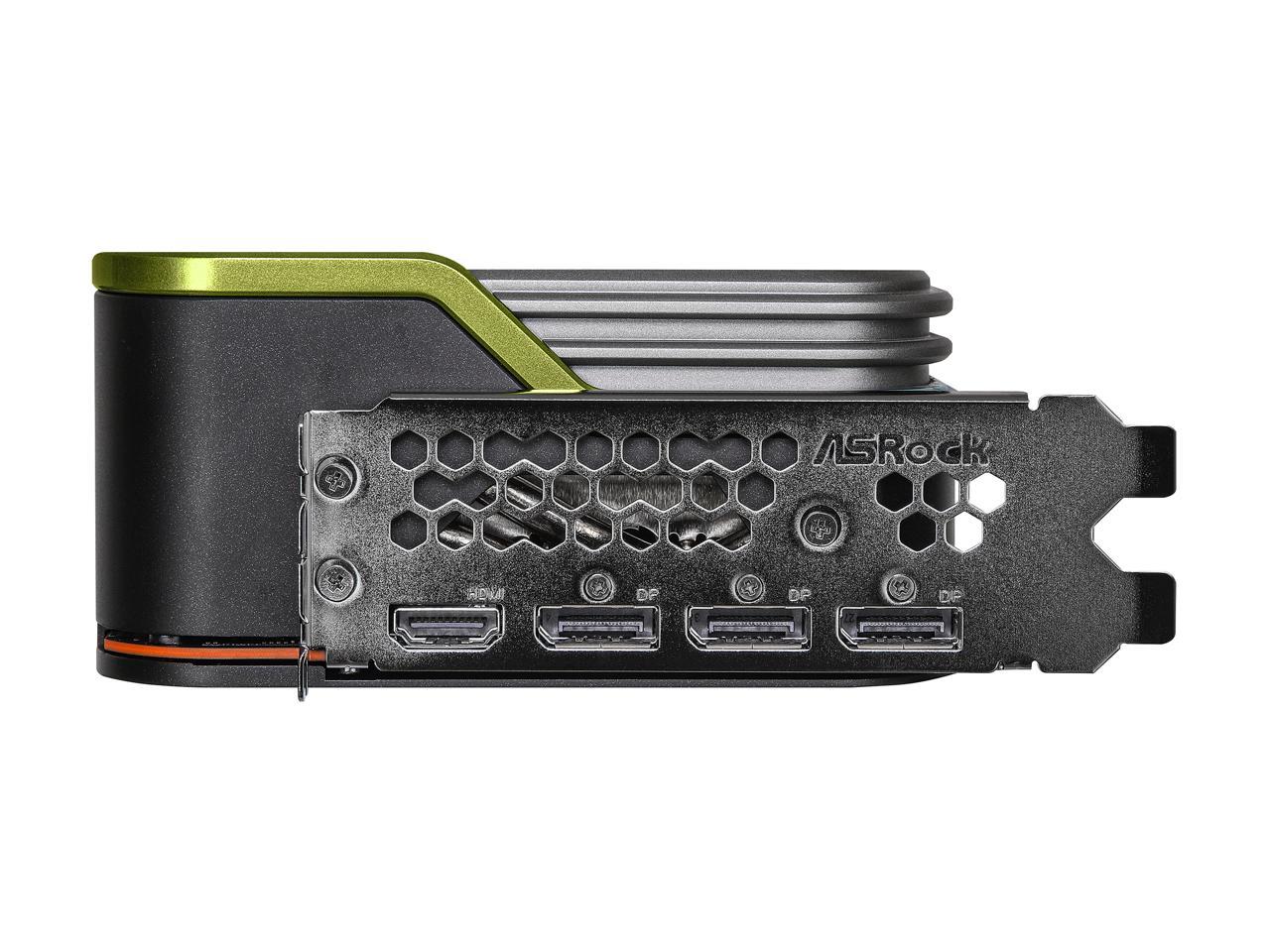 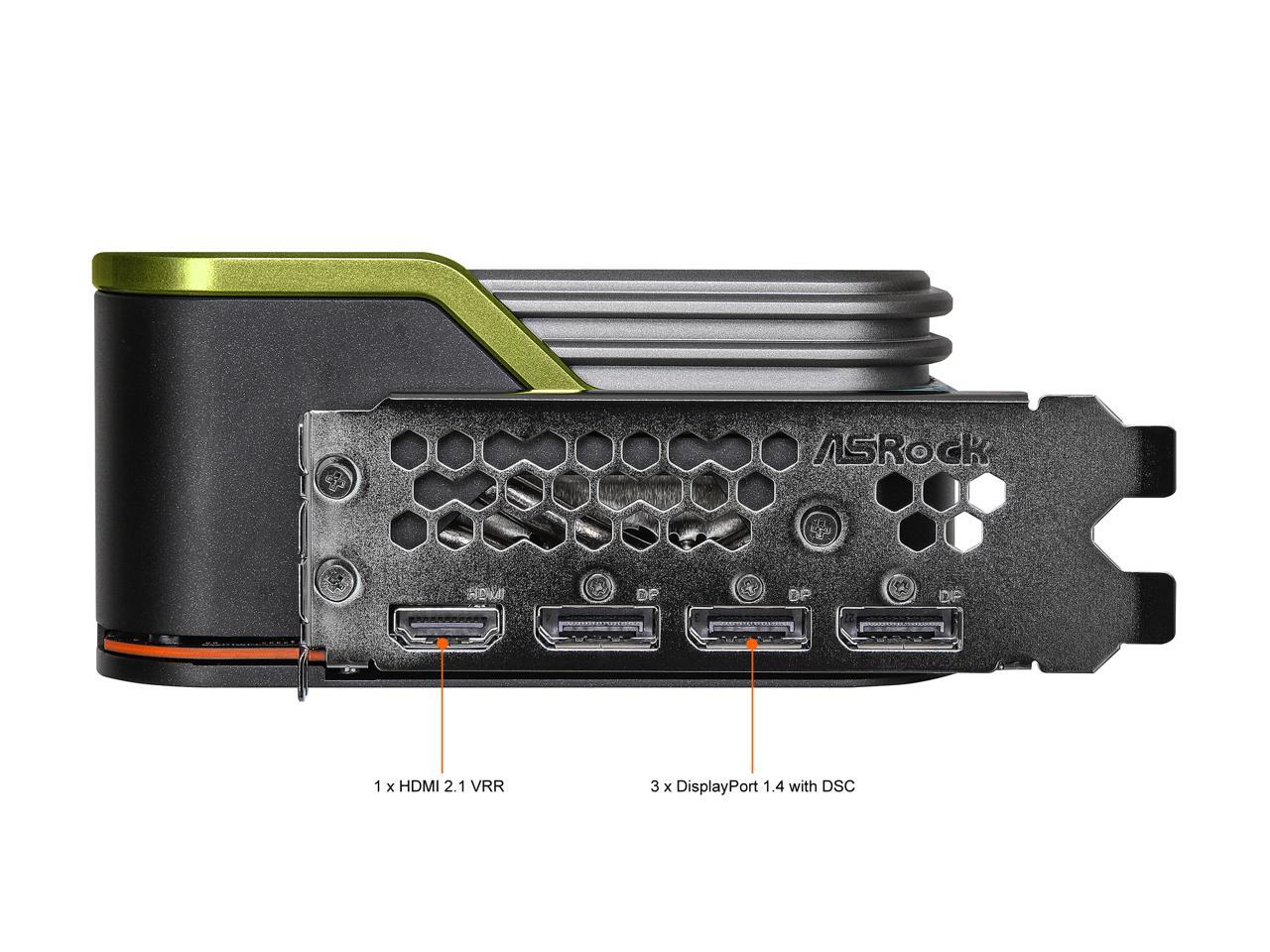 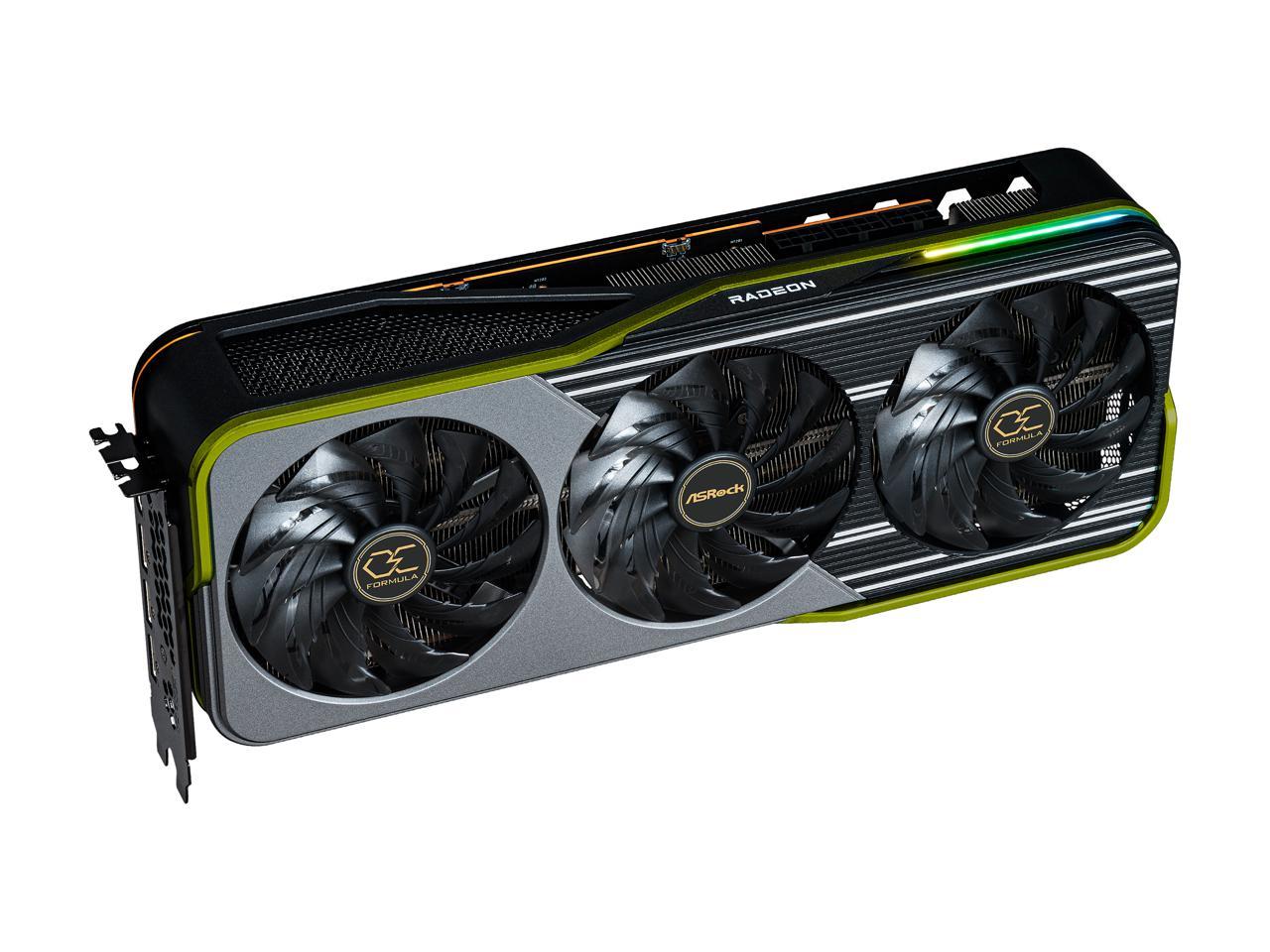 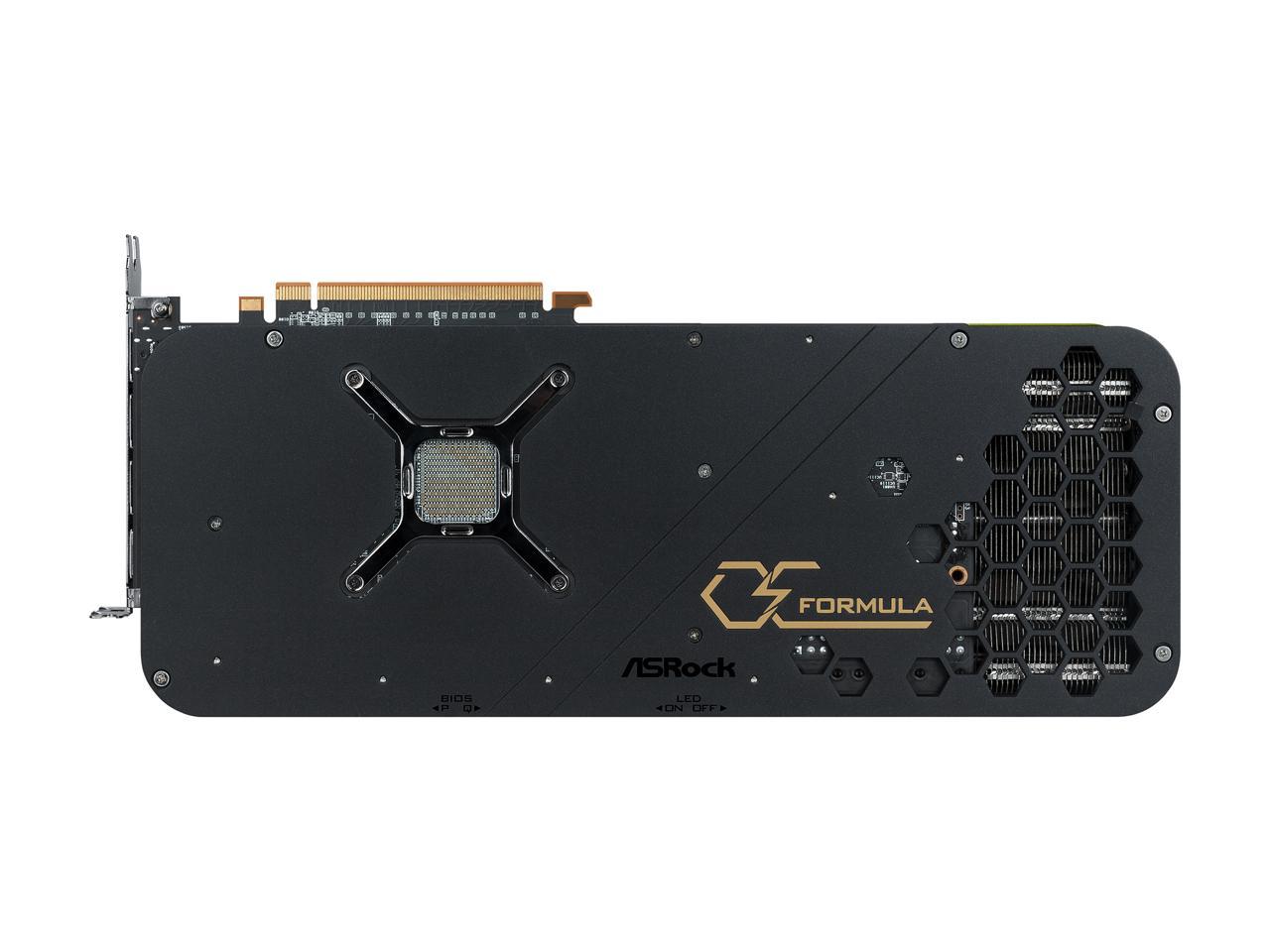 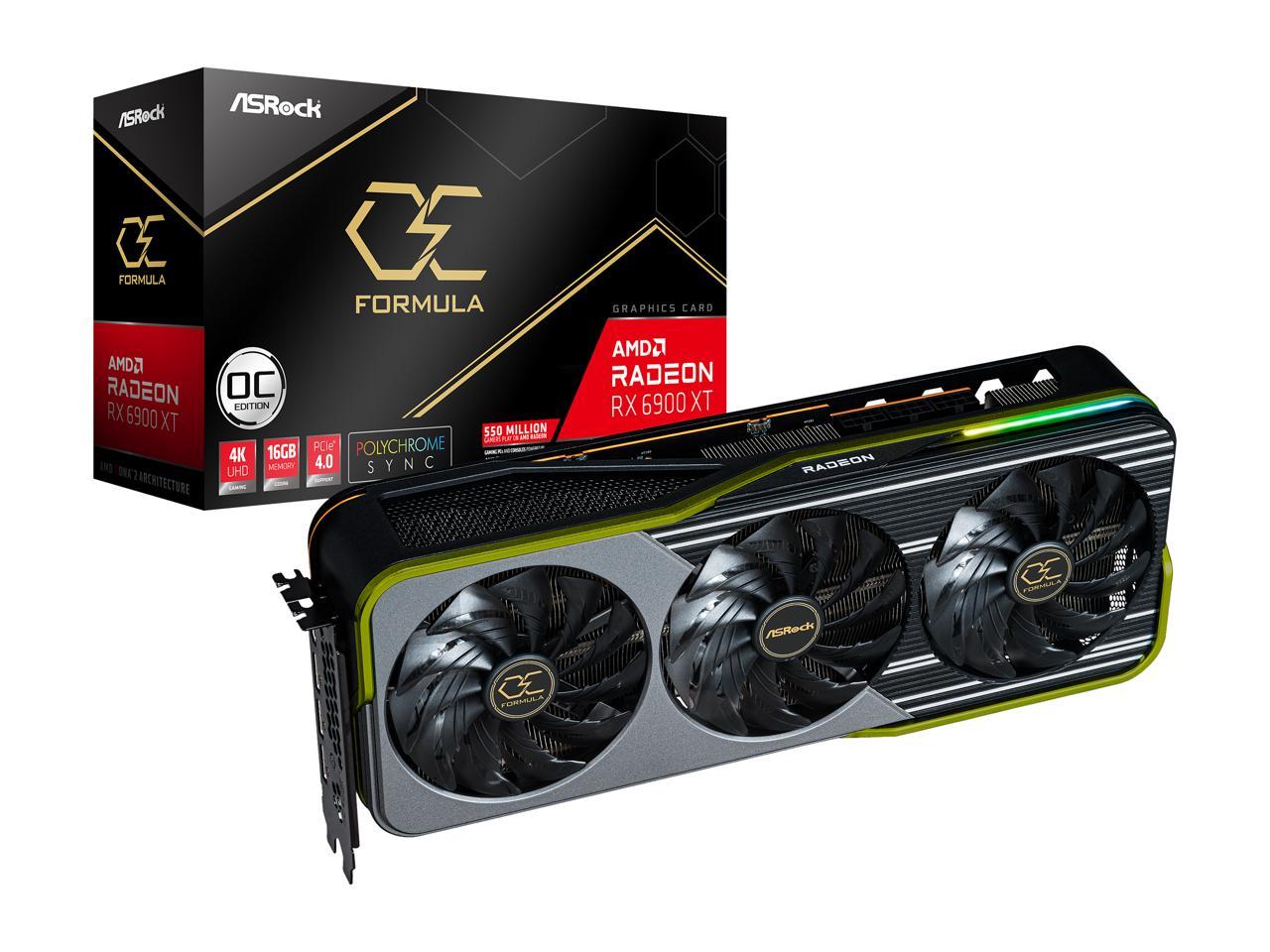 Delivers great performance which is more higher than reference cards based on the solid hardware design.

Create your own unique colorful light effects with the integrated ARGB LEDs. It can also be synchronized with your ASRock motherboards that support Polychrome SYNC.

21 phase power design with high quality components delivers a more sufficient power to the GPU for the optimized performance.

Crafted for the best balance between the thermal efficiency and silence by all the details.

ASRock’s custom Striped Axial Fan delivers enhanced airflow to optimize cooling from not only the stripe structure on each fan blade but also the polishing surface on the bottom side.

Guide the airflow to go more regularly and quickly to enhance the cooling efficiency by the V-shaped cutting fins and the V-shaped air vents.

The heatpipes are consolidated to maximize the contact among each others and also the GPU baseplate for the optimized heat dissipation.

With premium copper base heatsink design, the direct contact area to the GPU would be maximized to improve thermal transfer effectively.

Eliminate the gaps in the contact area to maximize heat transfer and thermal efficiency.

The premium thermal pad helps to transfer the heat of the components to the heatsink, improving heat dissipation.

LED On/Off Switch
On or Off? Switch as You Want.

You can switch not only the built-in ARGB LEDs but also the ARGB LEDs equipping with the connected strips/devices at once.

Dr.MOS is the integrated power stage solution which is optimized for synchronous buck-set down voltage applications! Intelligently delivering higher current and driving up to 90A continuous current for each phase, thus providing improved thermal result and superior performance.

High Density Glass Fabric PCB design that reduces the gaps between the PCB layers to protect the graphics card against electrical shorts caused by humidity.

Not only can it handles 4K graphics but also supports the next generation 8K video output for the ultimate visual experience.

This graphics card features PCI Express 4.0 support, with a throughput of 16 GT/s and enables two times the bandwidth compared to PCI® Express 3.0. Get ready for the next generation of PC gaming.

One Gaming DNA for PCs and Consoles

Pros: Easily maxes out every game in my library at 4K resolutions, with some older titles barely getting the card to 1/4th of its top clocks.

Cons: Big, really really big. Double check your case measurements, it was a tight fit in my Focus G case with the drive cage installed. You also need 3x 8pin PCIe power connectors to feed it. The price is also a big con, being inflated to nearly double MSRP.

Overall Review: Also not as loud as my previous 5700XT either, even when I force it to 2.4Ghz core clocks.

Cons: Price to performance is a hard pill to swallow, but if you want the best Radeon, this is it.

Overall Review: Finally gave team red a chance again for my GPU since the 9800 and am not disappointed, just a bit more poor.

Pros: The triple slot design of this card features a massive heatsink clad in elegant armor. Much like other huge graphics cards, it has an external support to prevent its great mass from damaging your PCIe slot and motherboard. AsRock also included a switch for dual bios as well as addressable RGB lighting on the card. It pairs well with the higher end of last gen Ryzen chips, and is one of the fastest 6900XTs available.

Cons: When pushed hard, this AsRock monstrousity can draw over 400 watts of power. You can definately get top-tier fps performance (usially matching rtx 3090) but you will lose efficiency to get those extra frames. I recommend a 1200 watt+ psu- which is only slightly higher than AsRock's own recommendation of 1000 watts. AsRock's own tuning software is rather pointless as offers nothing beyond the scope of AMD's own control panel software. I was able to push the GPU clock quite a bit without issue, but I could not get much more out of the VRAM. The pricing on this card is outrageous. At over double the MSRP of the standard 6900XT, it does not offer enough of a performance leap or extra features to justify its price tag.

Overall Review: This is the best the 6900XT and AsRock has to offer. If you have extra money there is alot to like about this card. It's super fast and powerful, but also very expensive and power-hungry.

Pros: - Card is a monster - Very fast - does everything it says it will - will make people love you

Overall Review: This card is impressive out performs the 3090 in most cases, it's massive and draws a ton of power. (Huge power spikes). But works well

Pros: Ran great for a month.... -good paper weight -can be used as a throwing weapon incase of intruders

Overall Review: -I spent 3 months trying to get this card to work properly and have tried replacements and on other pc's and I always no matter what end up with Crashes + Driver timeouts -im very sad -0 rating if I could

7 out of 11 people found this review helpful. Did you?
Manufacturer Response:
Dear Shant, Sorry for any inconvenience this may have caused you. We will be more than happy to assist you. Please contact us at https://event.asrock.com/tsd.asp Thank you ASRock Support Tech Support Email: https://event.asrock.com/tsd.asp
Timothy C.
Ownership: 1 week to 1 month
Verified Owner
it's a beast7/9/2021 6:34:11 PM

Pros: It looks good. It runs everything at high settings. During the winter, I can warm my house with the heat coming out of the back.

Overall Review: This thing is a beast. I can run Among Us at top settings. I can watch in wide eyed enthusiasm as I get killed within the first minute of game play or as I'm voted off during the first emergency meeting because I took too long on a task. It means that I can watch youtube videos while I wait for the round to end and I can get back to dying early.

Pros: Big and mean card, like it is crazy how huge this bad boy is. It makes my EVGA 1080 FTW2 look like a childs toy pretend card. Respectable framerates on my ultrawide 1440P 144 Hz monitor while it lasted.

Cons: died in just over one month (a week outside of Newegg return period). Paid too much and was forced by Newegg to buy a superfluous motherboard with it because they wanted to extort customers. Oh well, I got tired of waiting...

Overall Review: Haven't really had much of an opportunity to play games since installing this, a few hours a week. I was playing Horizon Zero Dawn and it just crashed. Then the computer wouldn't post (sticking at VGA with some crazy beeps). Replaced this with my old 1080 and it came right up. I've lucked out in the past and have never purchased a bad computer component before, just sucks that the first one that I get is THIS EXPENSIVE! It has shattered my faith in the AsRock company and now am worried that this will be an issue moving forward now that I am past my return policy from Newegg.

5 out of 9 people found this review helpful. Did you?
Manufacturer Response:
Dear Micah, Sorry for any inconvenience this may have caused you. We will be more than happy to assist you. Please contact us at https://event.asrock.com/tsd.asp Thank you ASRock Support Tech Support Email: https://event.asrock.com/tsd.asp
Muncho
Ownership: 1 week to 1 month
Verified Owner
Monster Card Monster Performance7/22/2021 5:21:59 PM

Pros: Looks Great Out of box Performance Outstanding Support in the Box

Cons: Price - only con that I can think of

Overall Review: Ok I am not super well versed in all aspects but I get the general idea on all these graphic cards. I was wanting to upgrade to either a rtx 3090 or the 6900xt. Finally this was available on Newegg with 199 off so I went ahead and did it. First off it is a monster but once unpackaged it looks great and this version came with a support. It was very easy to install and thank the lord I had purchased an 850 power supply previously for this build not realizing once I upgraded I would need 3 PCie power plugs lol. Now it does say 1000w is what they say but it works fine on my 850w. Downloaded Adrenalin software and I was ready to game. So far it laughs at everything I have thrown at it. I generally play first person shooters so just saying. Overall I really like this card and hop AMD continues with the advancements they claim and tease us with. Oh out of the box close to 2600mhz in performance mode. Have not tried in quiet mode so I cannot say anything about that.