Purchases from these Sellers are generally covered under our Newegg Marketplace Guarantee.
1,516 Ratings (87% Positive)
Sold and shipped by: DealKingContact Seller
Ships from United States.
1,516 Ratings (87% Positive)
On-Time
Delivery
90.73%
Product
Accuracy
92.89%
Customer Service
Satisfactory
86.61%
View All Seller's Reviews
This item is currently out of stock and it may or may not be restocked.
Out of Stock
Add To Wish List 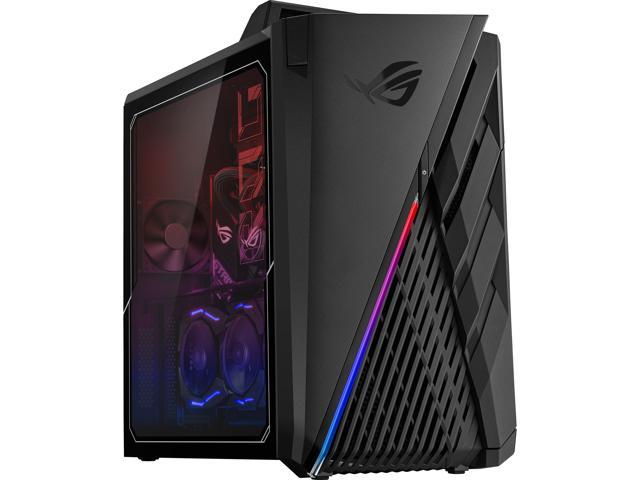 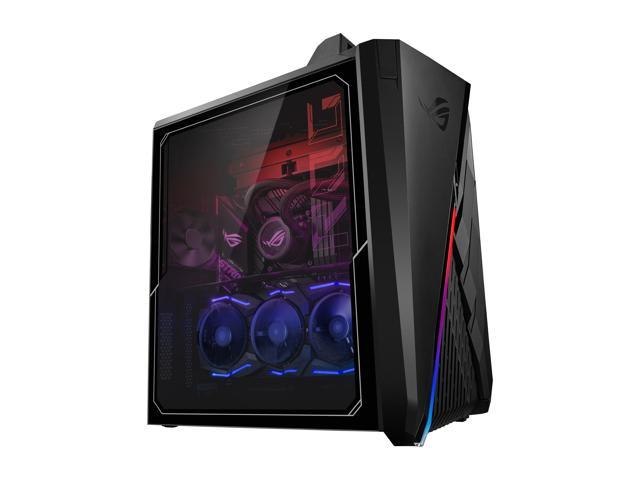 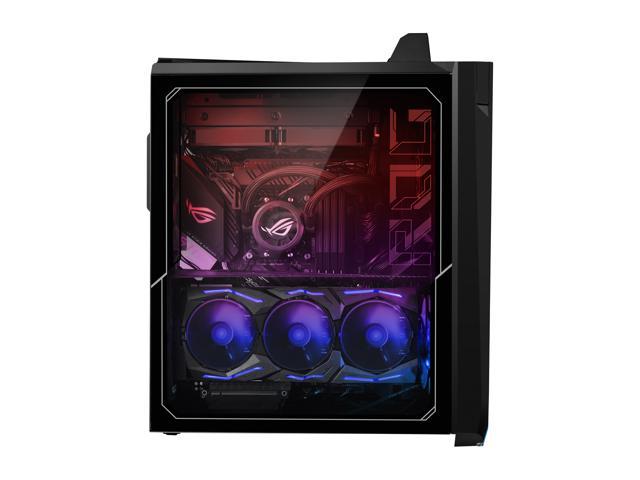 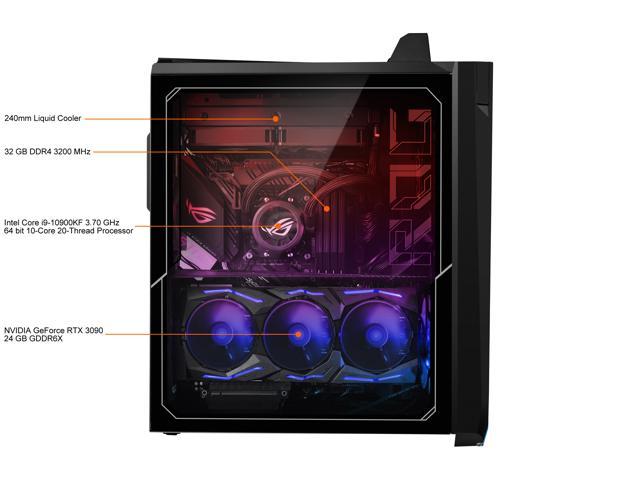 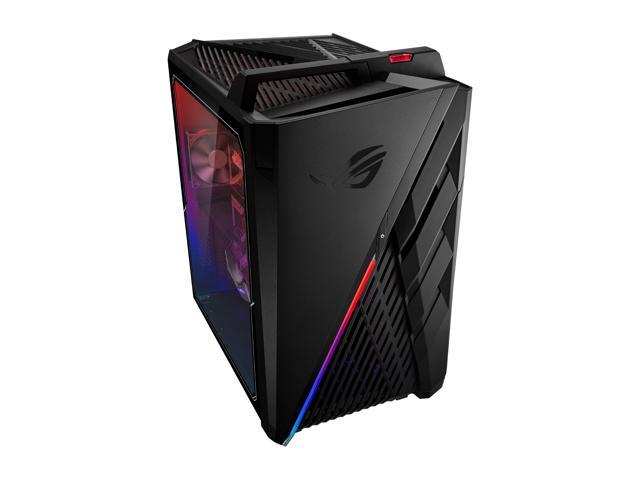 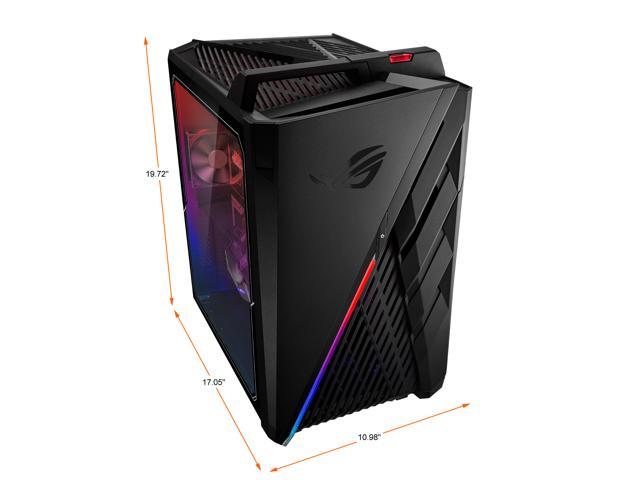 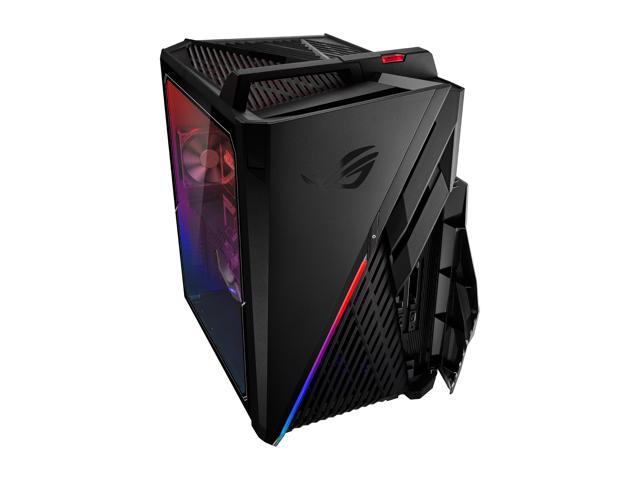 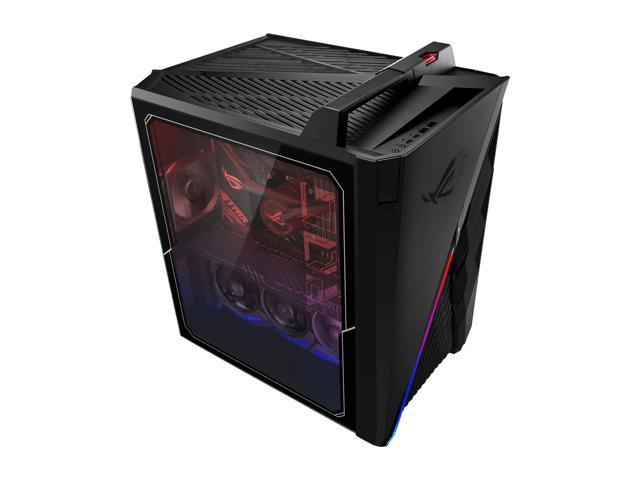 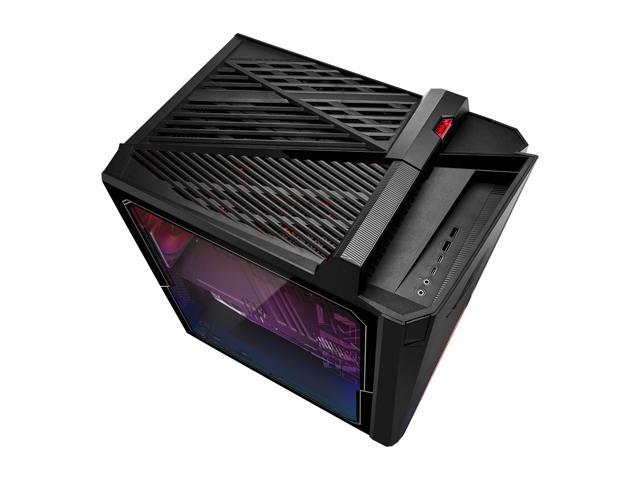 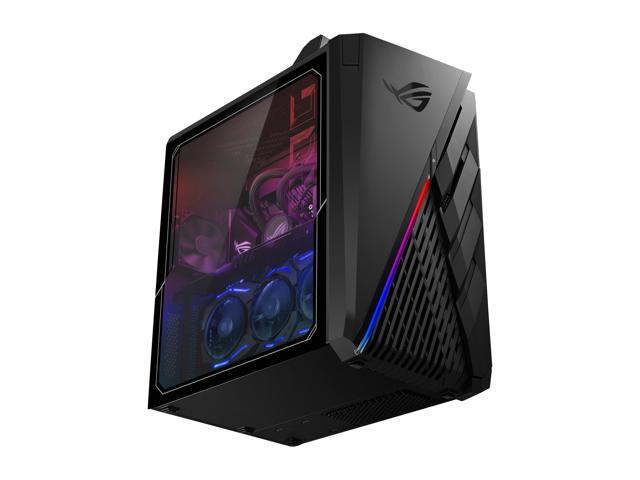 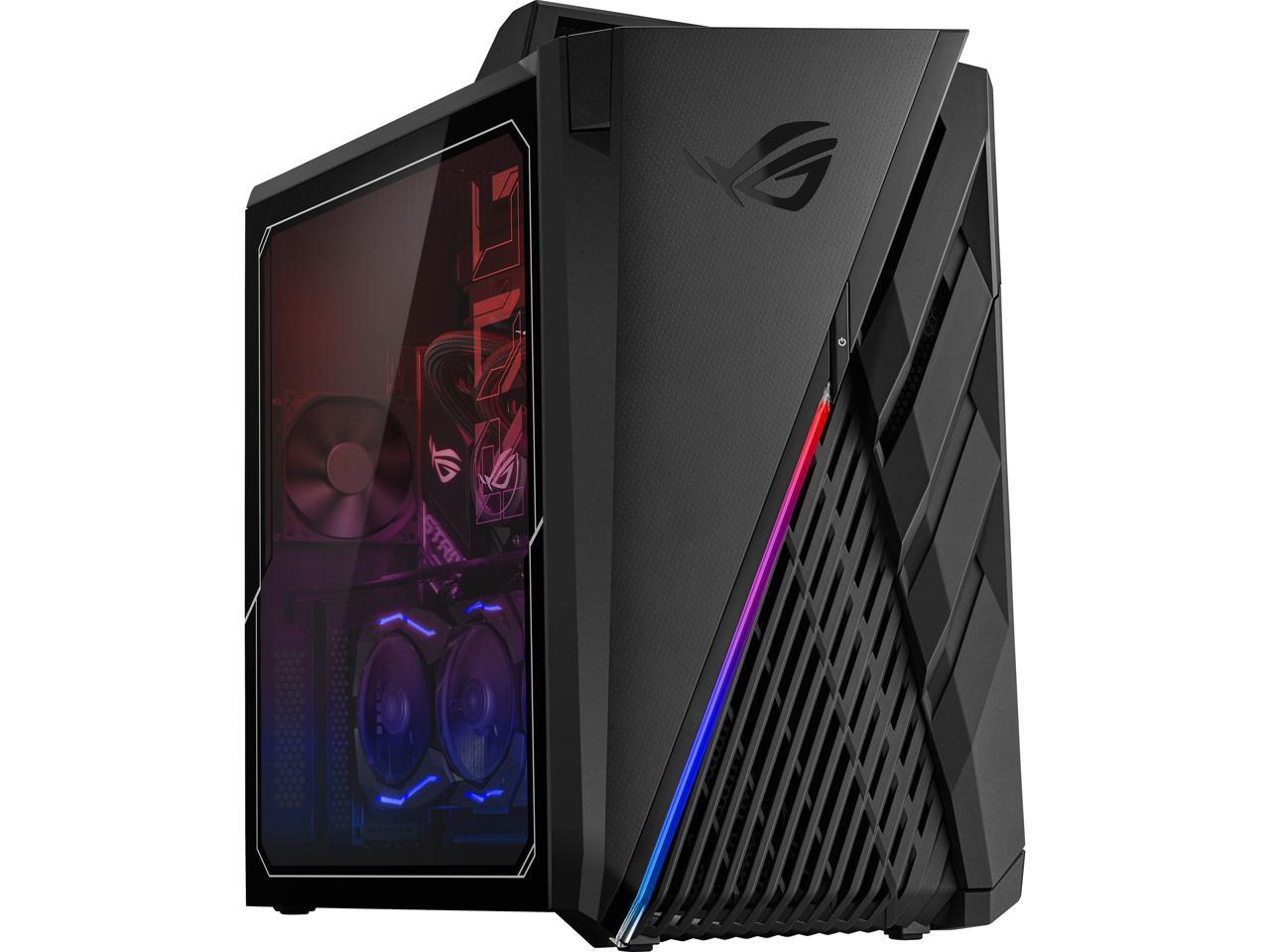 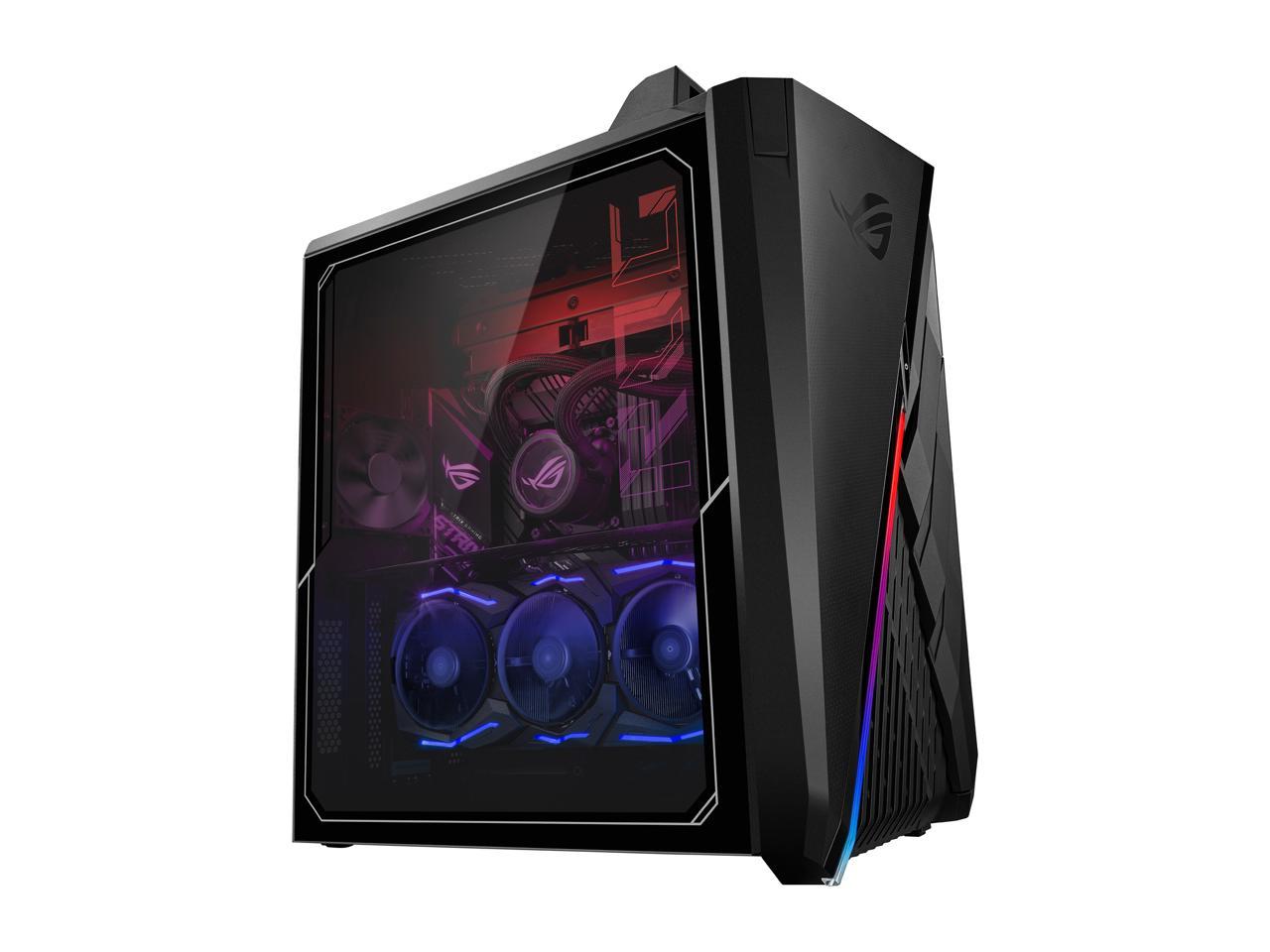 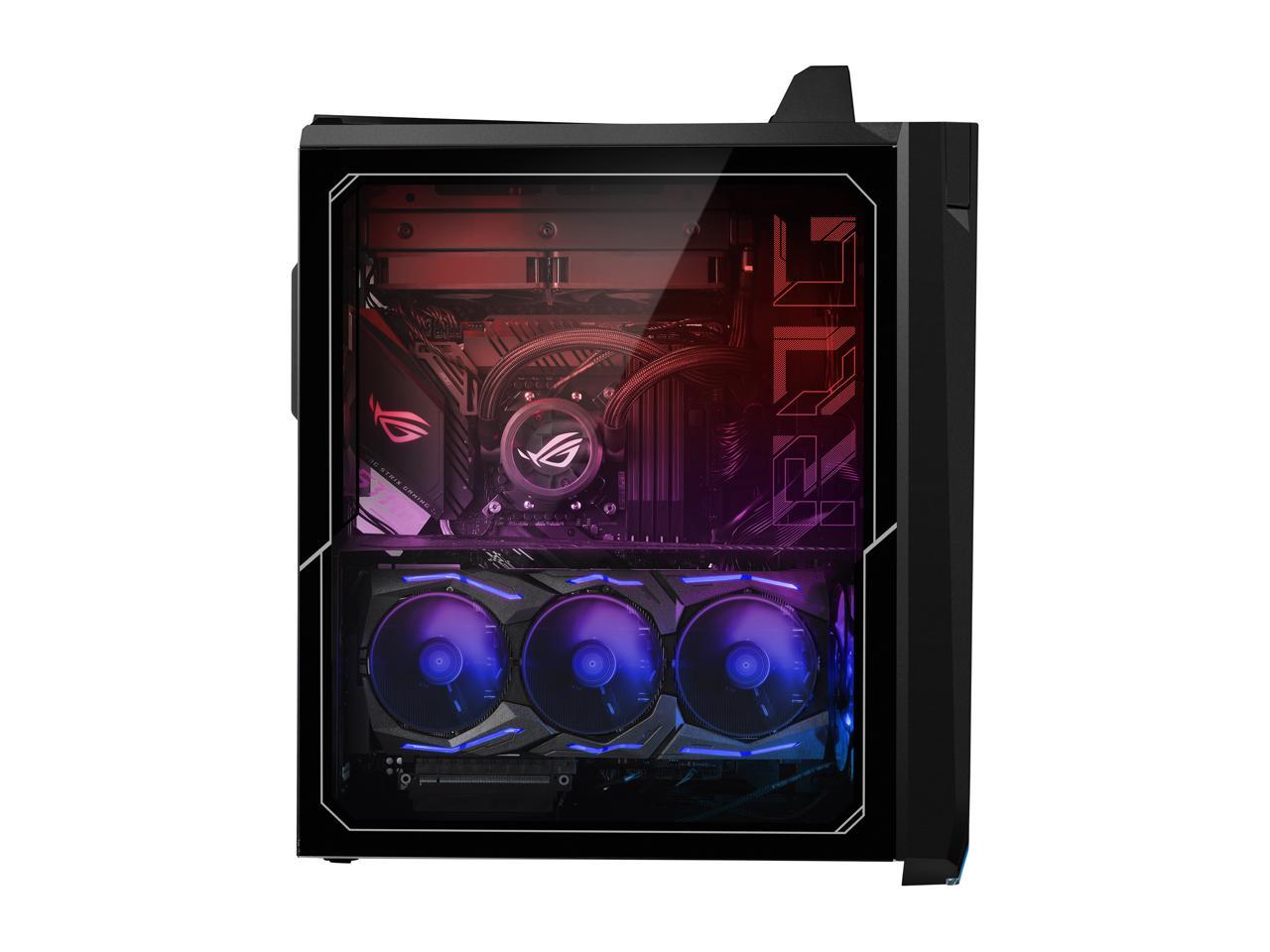 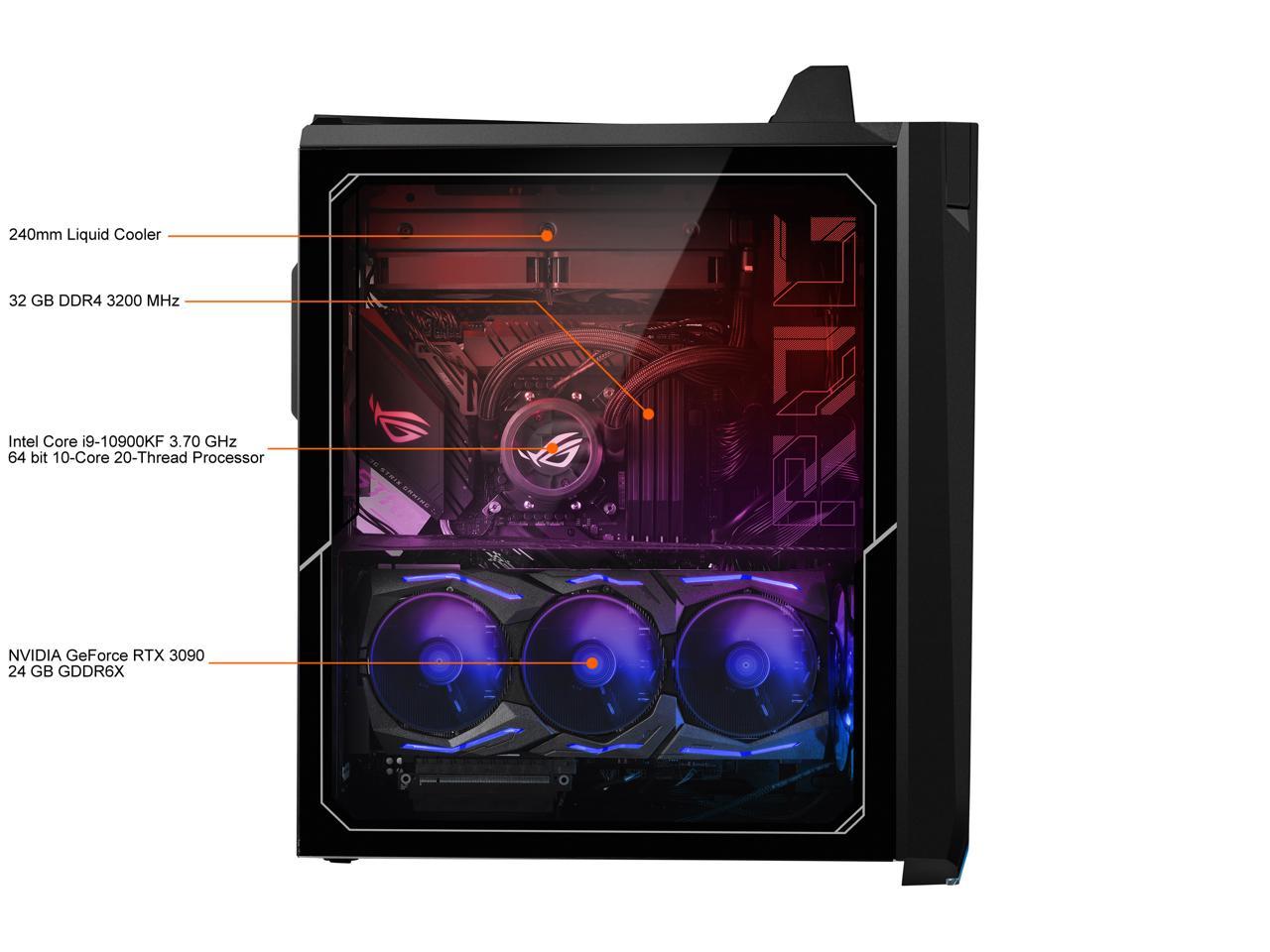 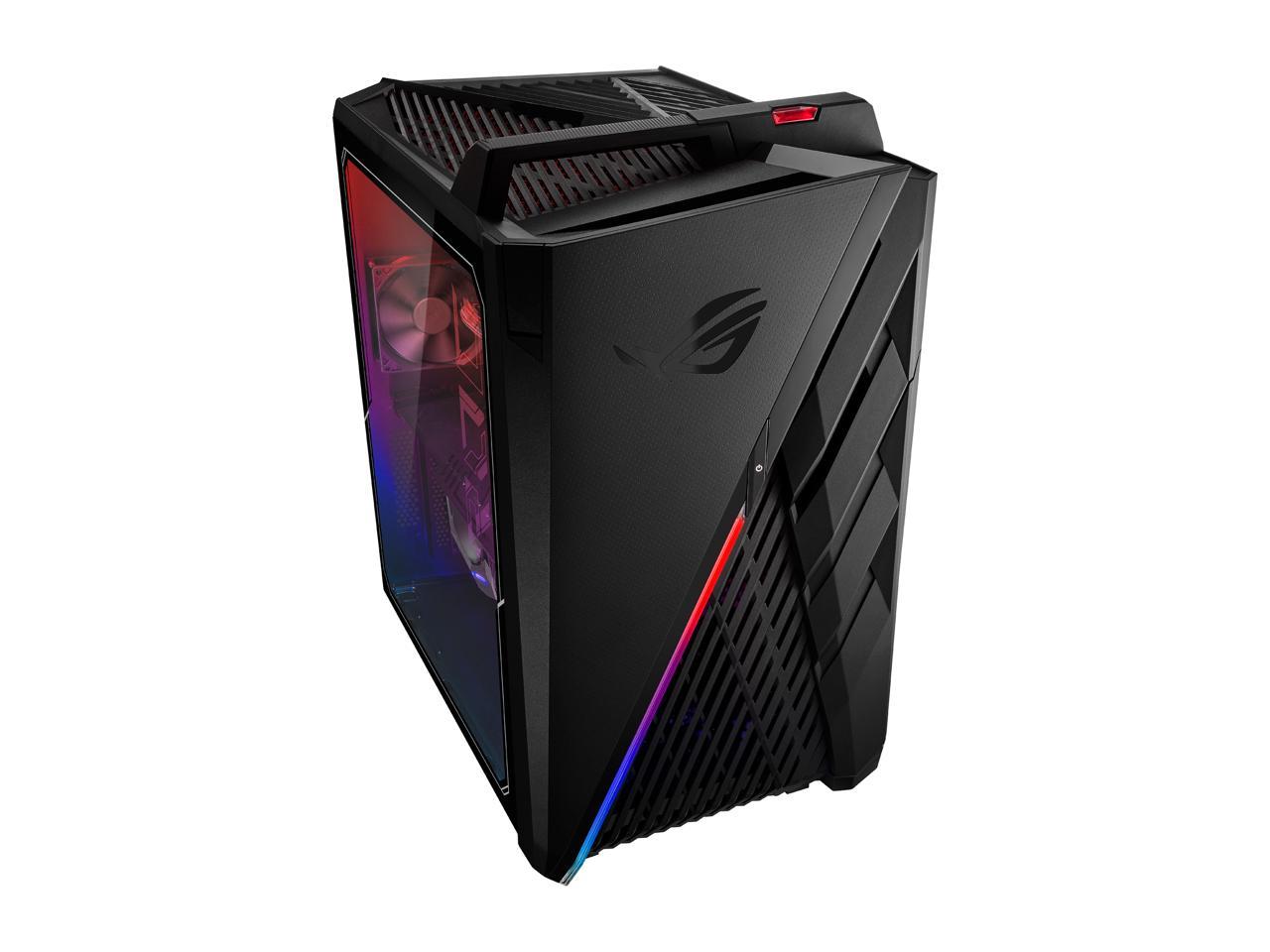 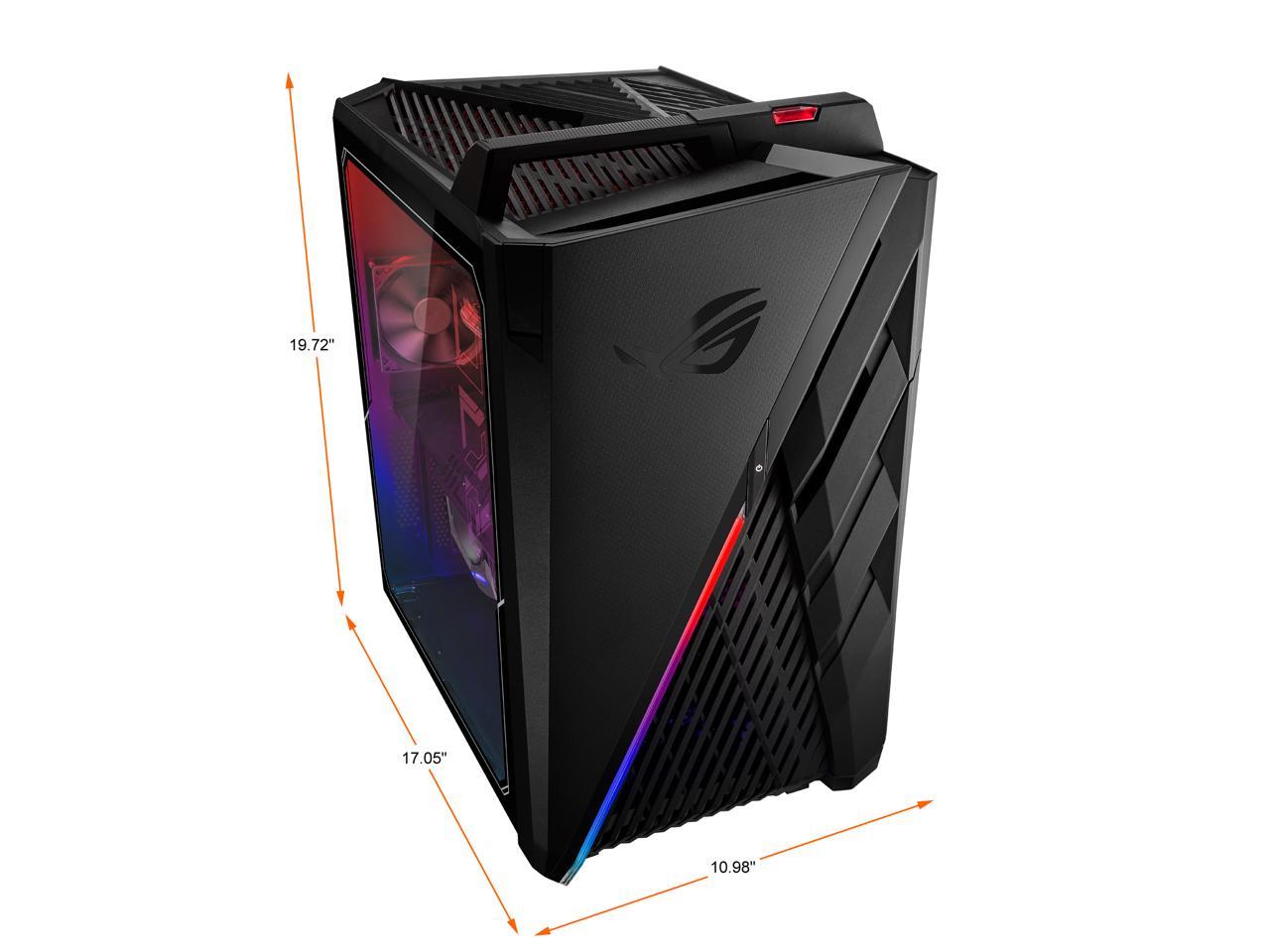 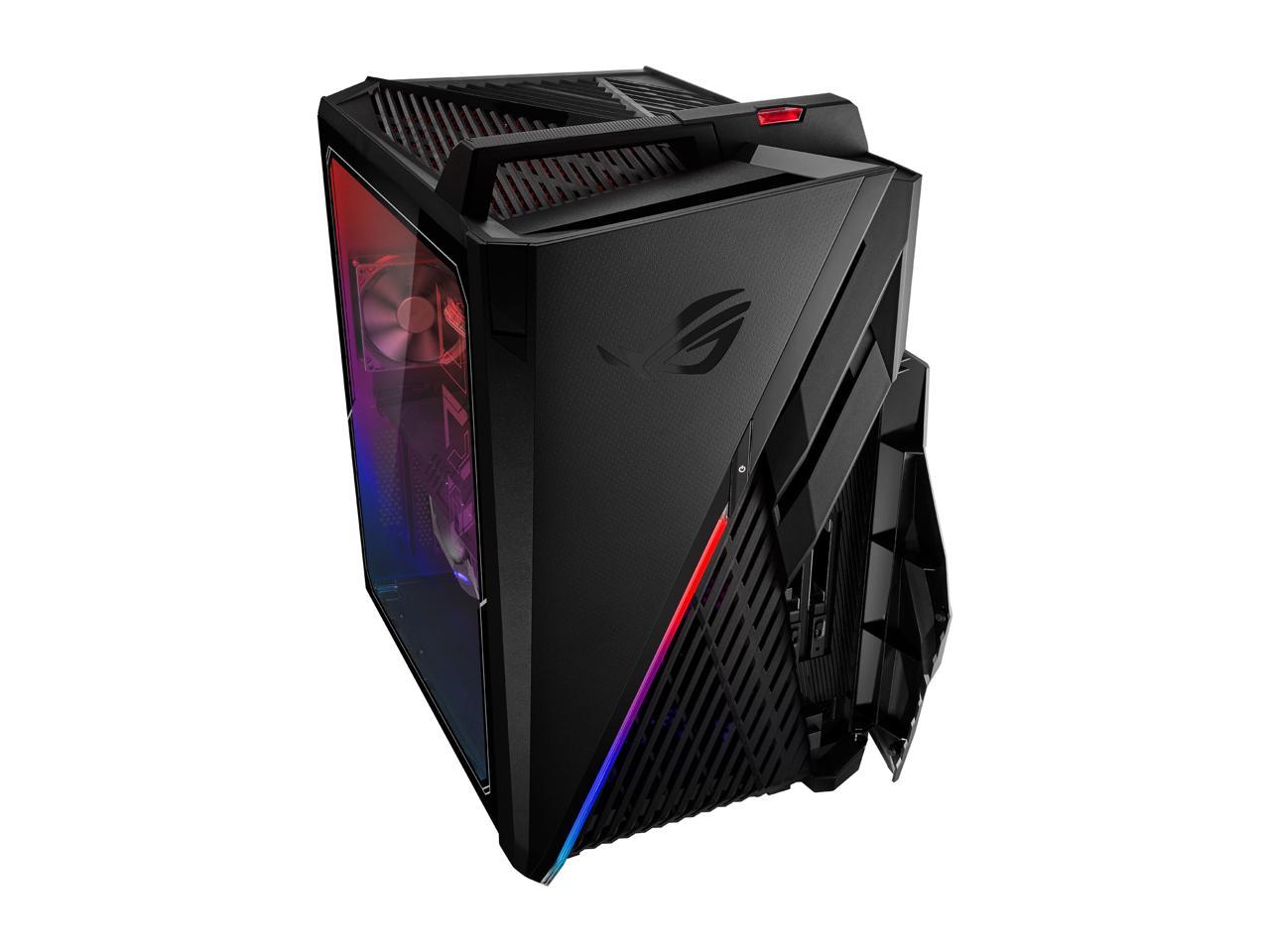 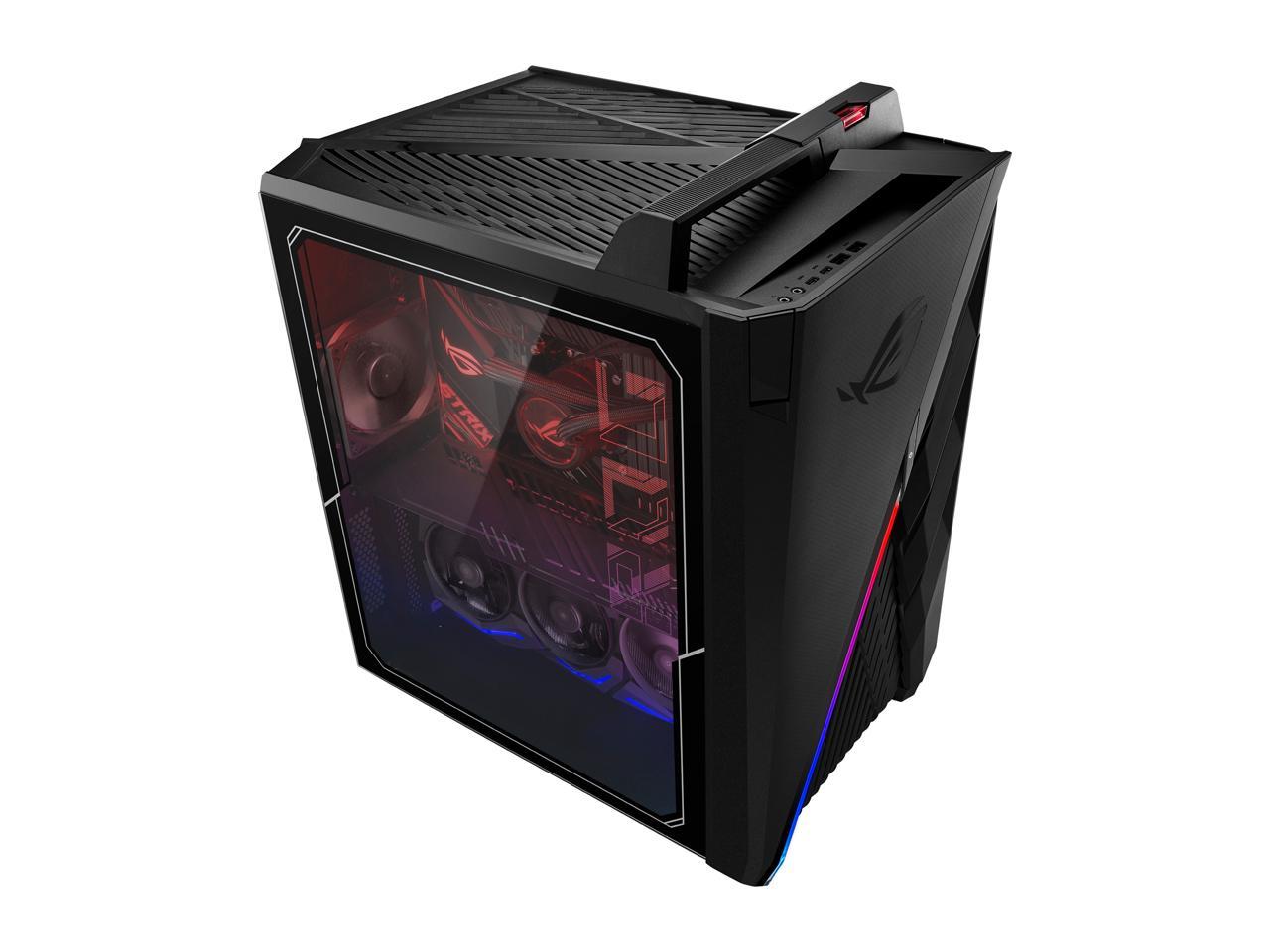 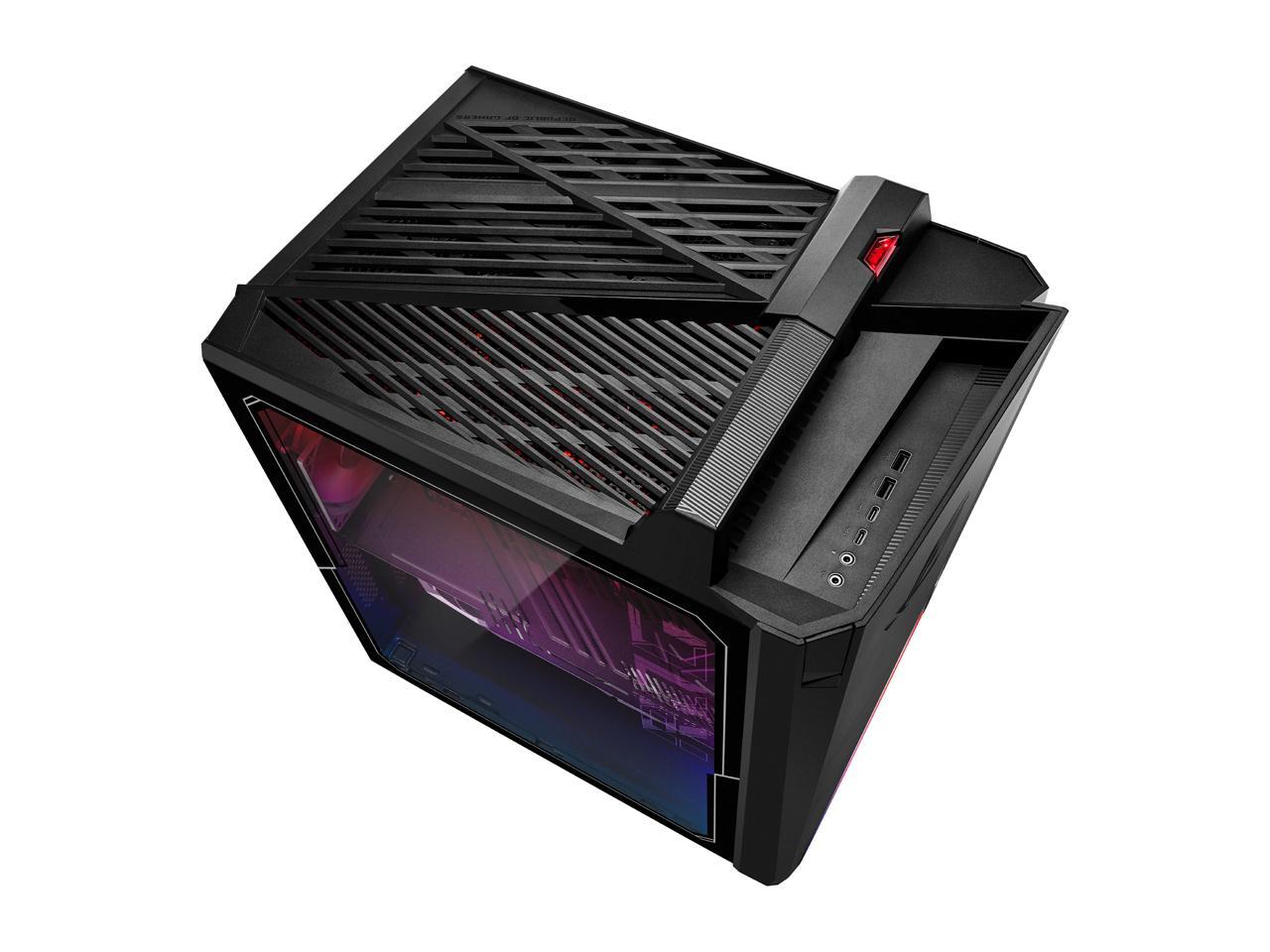 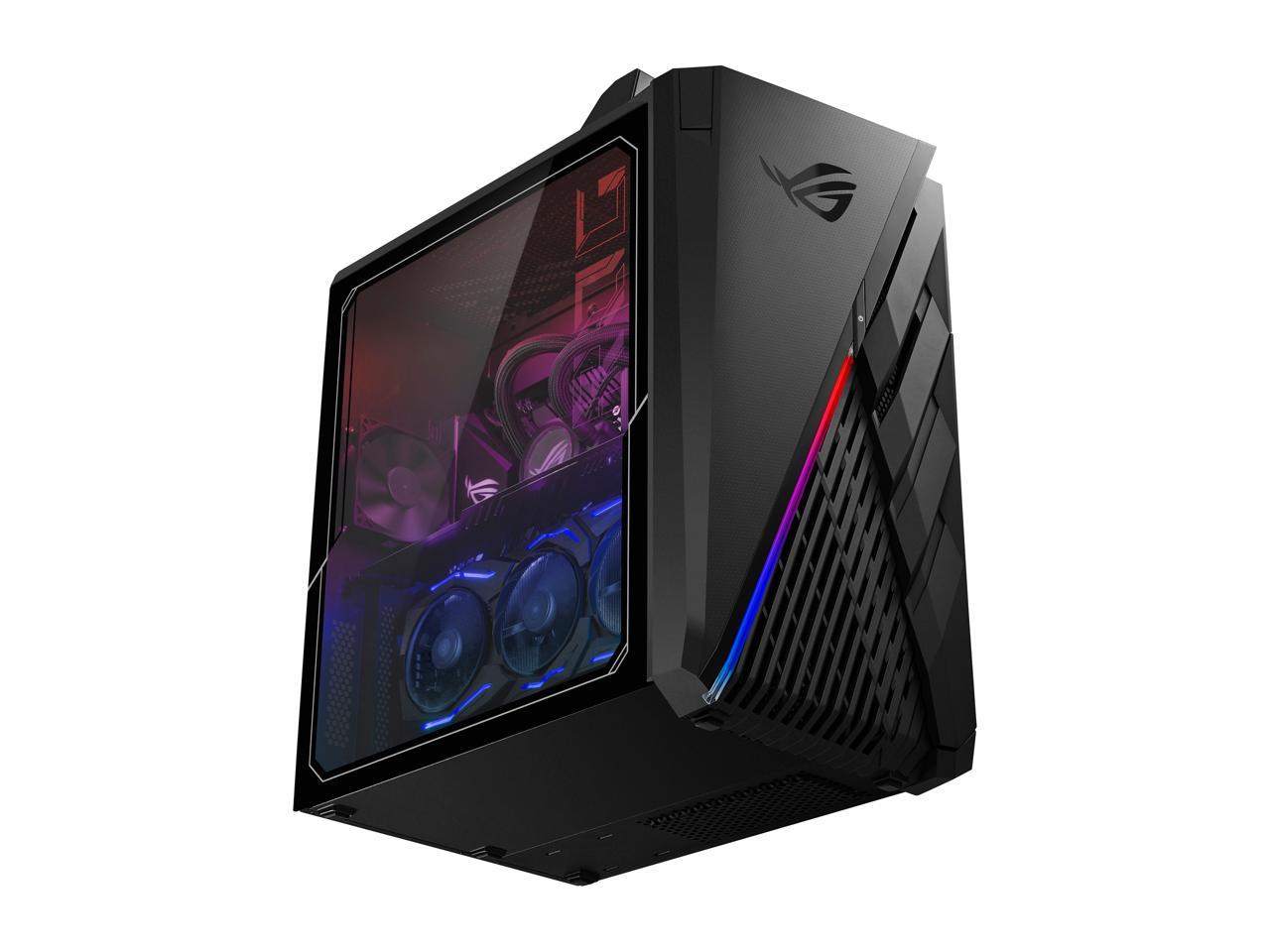 Learn more about the ASUS G35CZ-XB998

Pros: Good stuff inside but... that' it.

Cons: Worst Case you will ever encounter ! ONE Case fan, a small case fan at that maybe 90mm. ONE Case fan... thought i would mention that one again and from ASUS ROG gang. The pc is always hot. What a waste. It crashed three times so far due to heat. WHO the hell designed this?! FIRED!

5 out of 5 people found this review helpful. Did you?
Manufacturer Response:
Dear Tried and Tested, I'm sorry to hear that you have experienced repeated crashing and overheating problems with this machine. This is absolutely not the kind of experience that we want any of our customers to have. If the unit continues to crash during normal use, I would recommend contacting your reseller for a return. I will also forward your design feedback to the Product team for review. If you have any general or technical questions, please email me at cl-lane@asus.com and include case #N2102029573-0002 for reference. Thank you for choosing ASUS! Best regards, Lane ASUS Customer Loyalty – US Support
Anonymous
Ownership: 1 week to 1 month
Verified Owner
Great quality product but...4/29/2021 7:36:52 AM

Pros: - The components and the performance are awesome! - The case looks very solid compared to my other cases - RTX 3090 are known to have cheap thermal pads but this RTX 3090 ROG seems to have better qualities thermal pads to transfer heat. - Water cooled CPU - Nice packaging - RGB lights are cool

Cons: - This computer only has 1 small fan for the exhaust - There are no intake fans in this big massive desktop - GPU VRAM are at +-98-102C when it is on high demand which I don't like at all. Even if the VRAM can handle over 110C. In long term, I believe the GPU won't last that long at that temperature. The vertical GPU is nice but there isn't much space between the motherboard and the back plate (VRAM area) to dissipate the heat to cool down. I had to remove the glass panel to let the air flow inside the case to low it down to +-90C. Now I need to find a way to add fans which will be a headache. (The CPU water cooled fans does work but not enough to remove the heat) - I expected a mechanical keyboard at least - The mouse is normal (I was expected better)

Overall Review: Overall, I really like it and the components inside are worth it. I just wish I bought the GPU mounted horizontally for better heat dissipation. I also wished the case had intake and more exhaust fan. RTX 3080 and 3090 are known to have overheating issue. If you don't plan to play very very heavy extreme games, I would recommend this desktop since all the components are ROG compared to other computers with a small price different. I might do a video review about the pros and cons with thermal camera soon!

2 out of 2 people found this review helpful. Did you?
Manufacturer Response:
Dear Valued Customer, It's unfortunate to hear you're not completely satisfied with your G35CZ. We certainly value your feedback on this matter, and I will be letting the related department know about the issues you are experiencing for continuous improvements to the product line. If you need any assistance, feel free to contact me at cl-adrian@asus.com, and I will help you to the best of my abilities. I am here to assist our customers with our products and dedicated in bringing a resolution to all issues that they may come across. Your case for reference is N2104076725-0001. Thank you for choosing ASUS! Best Regards, Adrian ASUS Customer Loyalty – US Support
LCD
Ownership: 1 month to 1 year
Verified Owner
Remove the 2 panel at the side and run it at 100%5/19/2021 7:22:59 PM

Pros: - Excellent computer and chassis - Remove the 2 side panels and run it at 100% - Glass panel is amazingly beautiful but I had to remove it because of too much heat with the 3090 running at 100%.

Cons: -need to remove the 2 side panels because the system generates a lot of heat with the 3090 -

Pros: Works as intended. Has a good components (except mouse)

Overall Review: I want to say that overall the PC makes a positive impression. Below are just some complains which I have, but they are not overlapping the machines good sides. It is fast as hell, functions perfectly and has a lot of gamers gimmicks and ASUS bloatware which could be useful for some (or easily uninstalled). Anyway, it is necessary to note some obvious design weaknesses: 1) The PC comes as a well-built single piece. No loosen parts, no unconnected wires. All screws are tightened and has a well-known Phillips cross heads (no proprietary bolts, so easy to disassemble). But the case literally doesnt have a place for any pci-e extension cards. There are some slots on the mainboard (which the vertical graphic card completely blocks). But even if you use some extension wires to connect your, lets say, a PCI USB-host, or PCI card reader, the case doesnt have any spare output slots to attach it to. Just look on the rear of the case to get what I mean. 2) The single piece also means that there is no any documentation or spare/additional parts which are usually comes with motherboard, PSU, CPU etc. when you obtain them separately. I guess they were just thrown out during the assembly. Why to give user additional wires for PSU if he cant attach any extension, yes ASUS? The motherboard has a place to install second M.2 SSD, but who needs that tiny little screw to hold that SSD in place? (Wish you a luck to find that single screw without insane overprice, lol) Keep that stock CPU cooler which could help if the water pump breaks off after the warranty expires? Why bother! The PC is supposed to be overclocked, but do user really need the mobo guidebook? Let that lazy consumer try to google it himself without even a slightest hint of the model and revision. Its always fun to have a routine BIOS update as an epic quest! 3) The machine is really quiet at idle and on low tasks, but when on load - that tiny little SINGLE 90x90 fan on the back wall struggles with throwing out all that hot air. And it starts to wine with annoying pinching noise. Not something to be bothered of when youre wearing the earphones, but enough to irritate your roommate within several hours. I guess that issue will be solved within a year by itself, because THE CASE DOES NOT HAVE DUST FILTERS AT ALL and the clogged fans do not produce weird sounds. What a joke! Luckily there is a place to put some generic dust filters in the case, but I didnt try it yet. I didnt experienced any overheat shutdowns like the dude below, but lets see on a wider timescale (when the summer comes) if the lonely small fan is enough for such melting furnace. 4) Mouse and keyboard were not the parts I expected much from, but they surprised me anyway. The keyboard is really cool keys are smooth, pleasant to touch and very silent. Disappointedly there is no USB host inside, which Ive been accustomed to, but thats not a big deal. And the mouse The mouse doesnt have a surfing buttons forward/backward! Really, ASUS? Last mouse I saw without those buttons was attached to COM-port and had a rubber ball inside (yes, Im that old) Also, dont miss that the case is much wider and shorter than default PC towers. If youre planning to put in into some sort of holder/shelf or on desk with narrow space, measure it in advance! Summary, the machine is great for the price I was lucky to get it. It is very fast and pleasant to use most of the time. But also has some noticeable flaws, which to some degree could be dealt with after some investments. I recommend it to buy for anyone who doesnt want/cant build its own PC or just has given up trying to get a 3090 to start his custom build.

Pros: With computer components being so scarce this was not a bad deal for everything you got.

Cons: As the title states the computer hard crashes once under a load and slow to boot afterwards. Normally takes 10 seconds or so to boot up, but during a crash a good one or 2 minutes. Aside from battlenet, epic games, and steam the computer is pretty bare as far as installed programs. Windows is up to date, graphics card up to date. ALL updates have been done. I was able to monitor the hardware prior to the crash and temperatures never exceeded 70 Celsius. This does come factory tuned so maybe they just tuned it wrong. I don't know.

Overall Review: Newegg has been great during this process. Unfortunately there is something off about this machine. I am the second customer to have this problem out of 12 reviews, so that tells me that ASUS is doing something wrong. This is the first ASUS product I have ever had a problem with.

Did you find this review helpful?
Manufacturer Response:
Dear Valued Customer, It's very unfortunate you've encountered issues with your system. Please understand, all ASUS products are manufactured with materials that comply with industry's quality standard and each one undergoes intensive quality control testing and inspections, this is a random problem. ASUS provides warranty for the unit in order to fix or repair any isolated factory escape defect. In the meantime, please make sure you're using the latest drivers, if you not, you can update your drivers via Armory crate in your settings tab. Should you need any assistance sending the unit in for warranty service, You can reach me at cl-adrian@asus.com. Your case for reference is N2102029573-0003. Thank you for choosing ASUS! Best Regards, Adrian ASUS Customer Loyalty – US Support
Anonymous
Ownership: 1 month to 1 year
Verified Owner
Good build for pre-built5/29/2021 6:49:22 AM

Pros: 3080 tuf Everything works well together and it's am asus

Cons: Was disappointed it wasn't a strix 3080 but the tuf is a beast so it wasn't that big of a disappointment

Did you find this review helpful?
Manufacturer Response:
Dear Valued Customer, We certainly value your feedback on this matter, and I will be letting the related department know about the issues you are experiencing for continuous improvements to the product line. If you need any assistance, feel free to contact me at cl-adrian@asus.com, and I will help you to the best of my abilities. I am here to assist our customers with our products and dedicated in bringing a resolution to all issues that they may come across. Your case for reference is N2104076725-0002. Thank you for choosing ASUS! Best Regards, Adrian ASUS Customer Loyalty – US Support
Anonymous
Ownership: 1 month to 1 year
Verified Owner
Great PC for the money5/24/2021 8:02:12 AM

Cons: The case only has one fan, So you have to take off the glass side panel if you want the pc to run smoothly and cool, otherwise it overheats.

Overall Review: Great PC for people that can take apart the pc and put it together, because it is not a finished product. Needs more cooling!

Pros: This is the epidemy of desktop computers!! I have built hundreds of computers over the years but this one is the best! Fast FAST FAST!!

Cons: The only thing this setup is missing is the driver disk and manual. I have looked all over and have failed to find these important items.