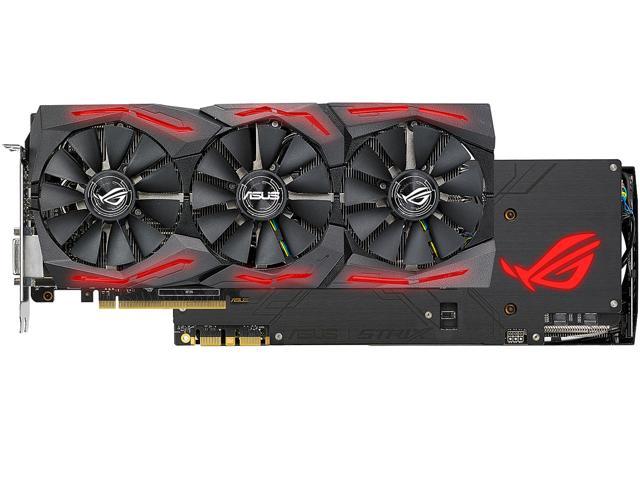 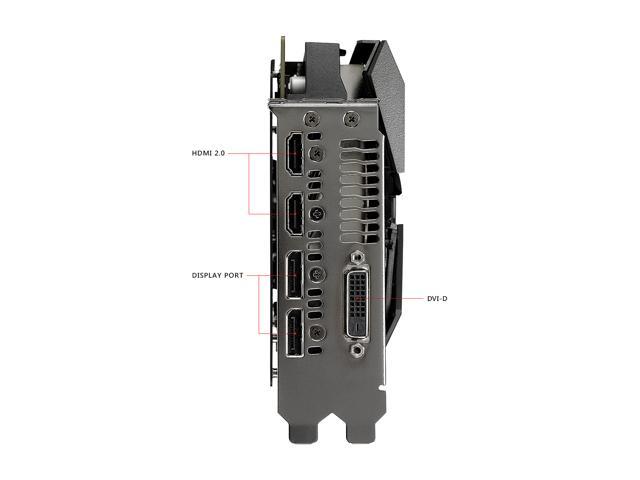 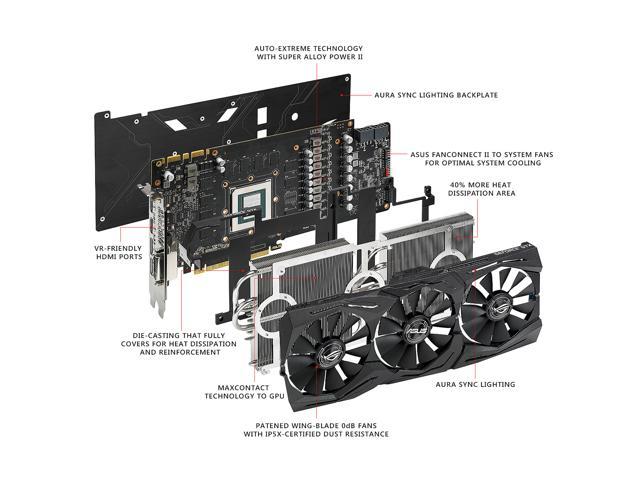 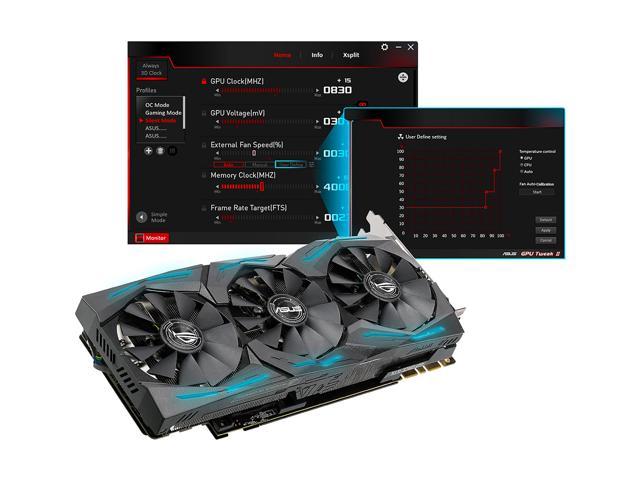 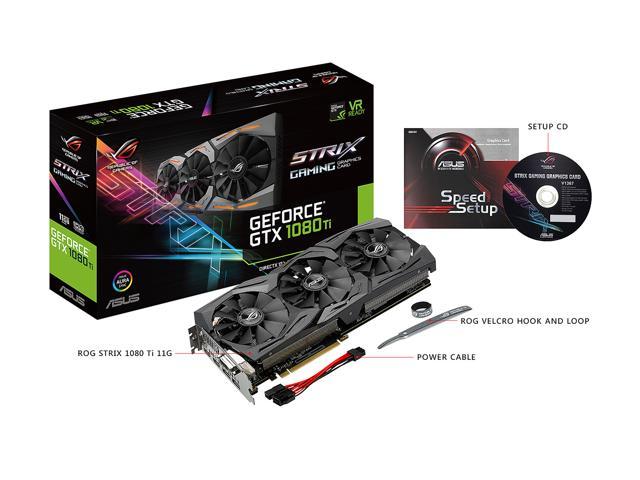 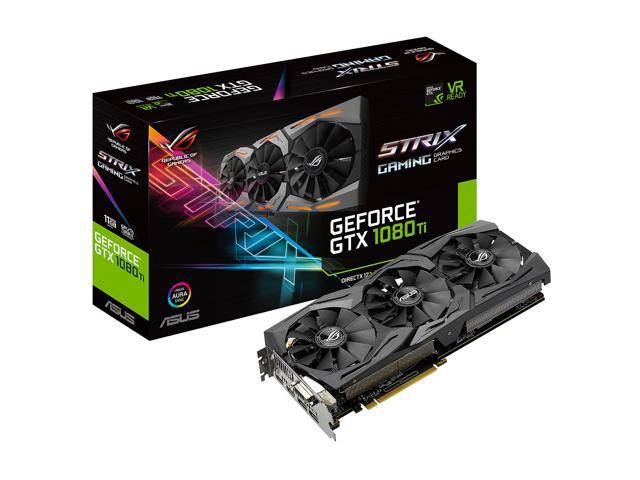 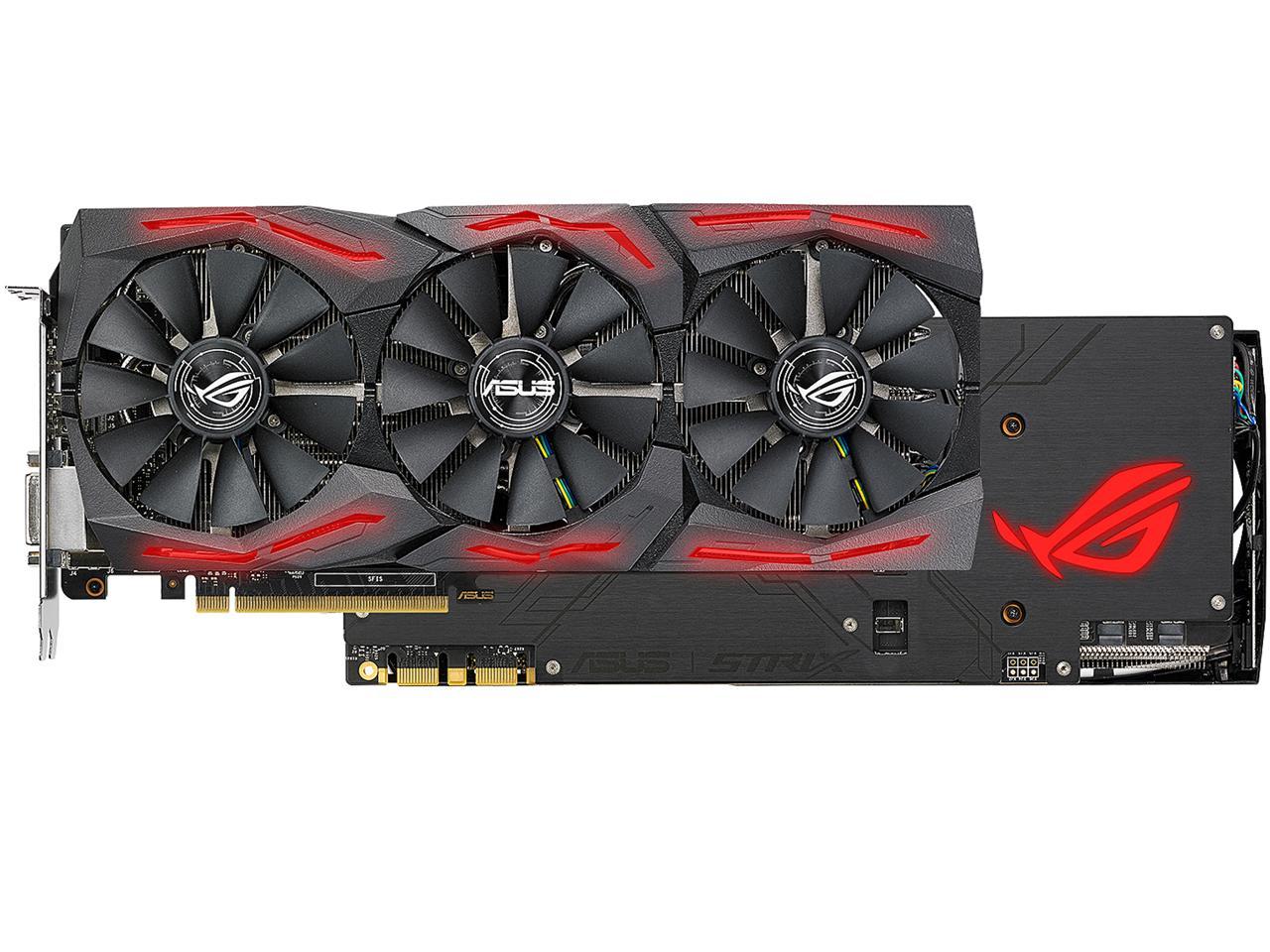 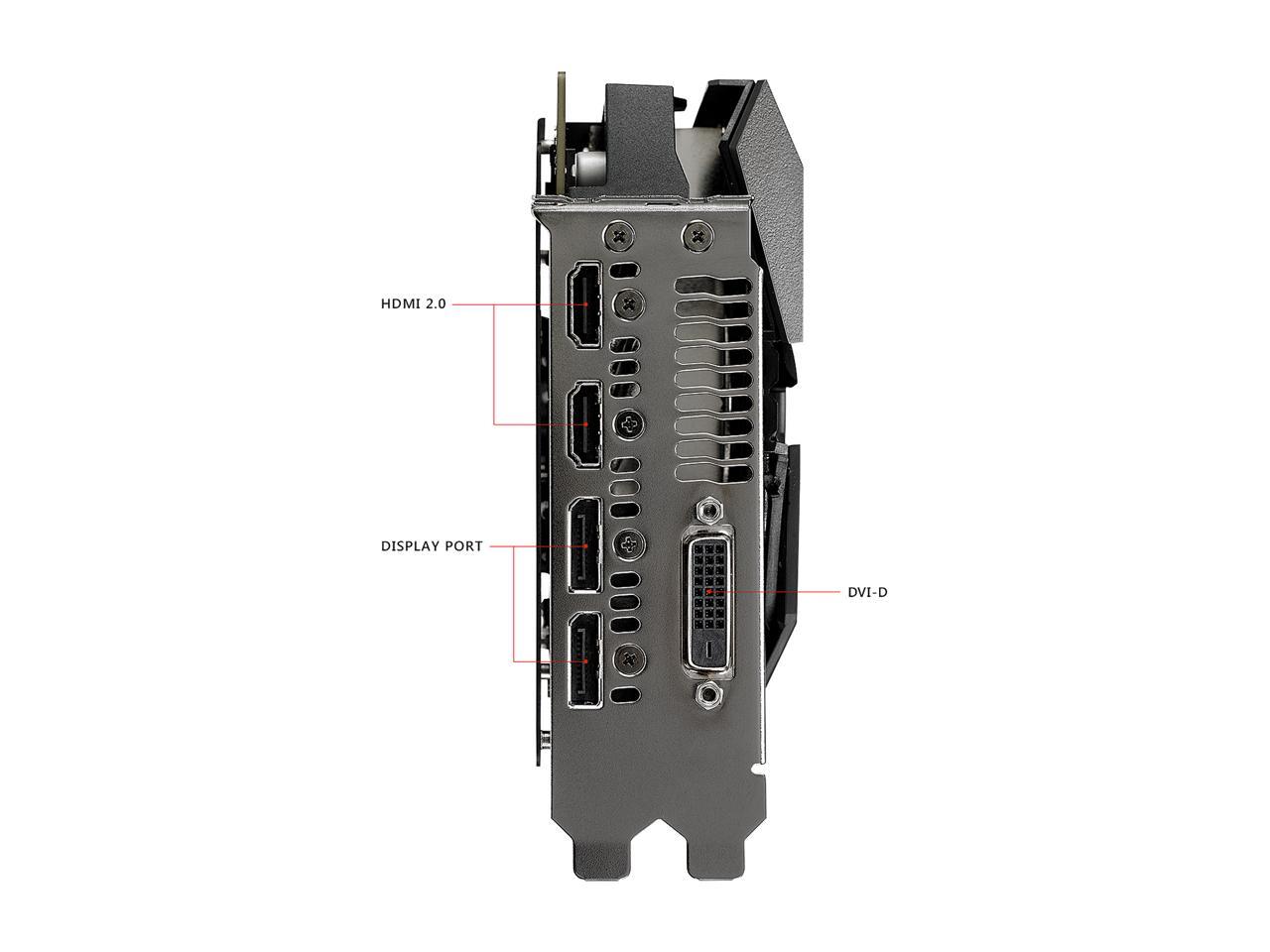 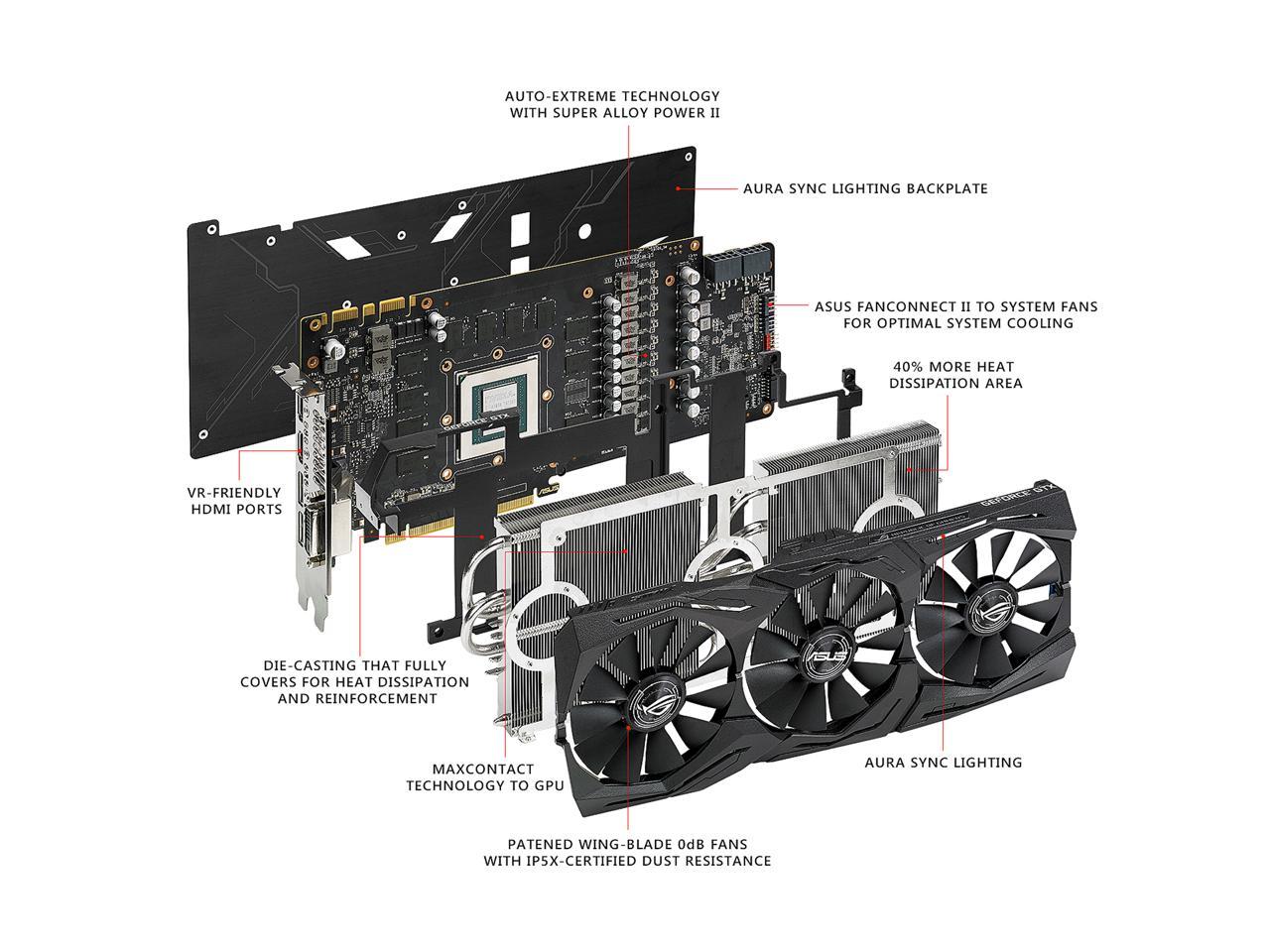 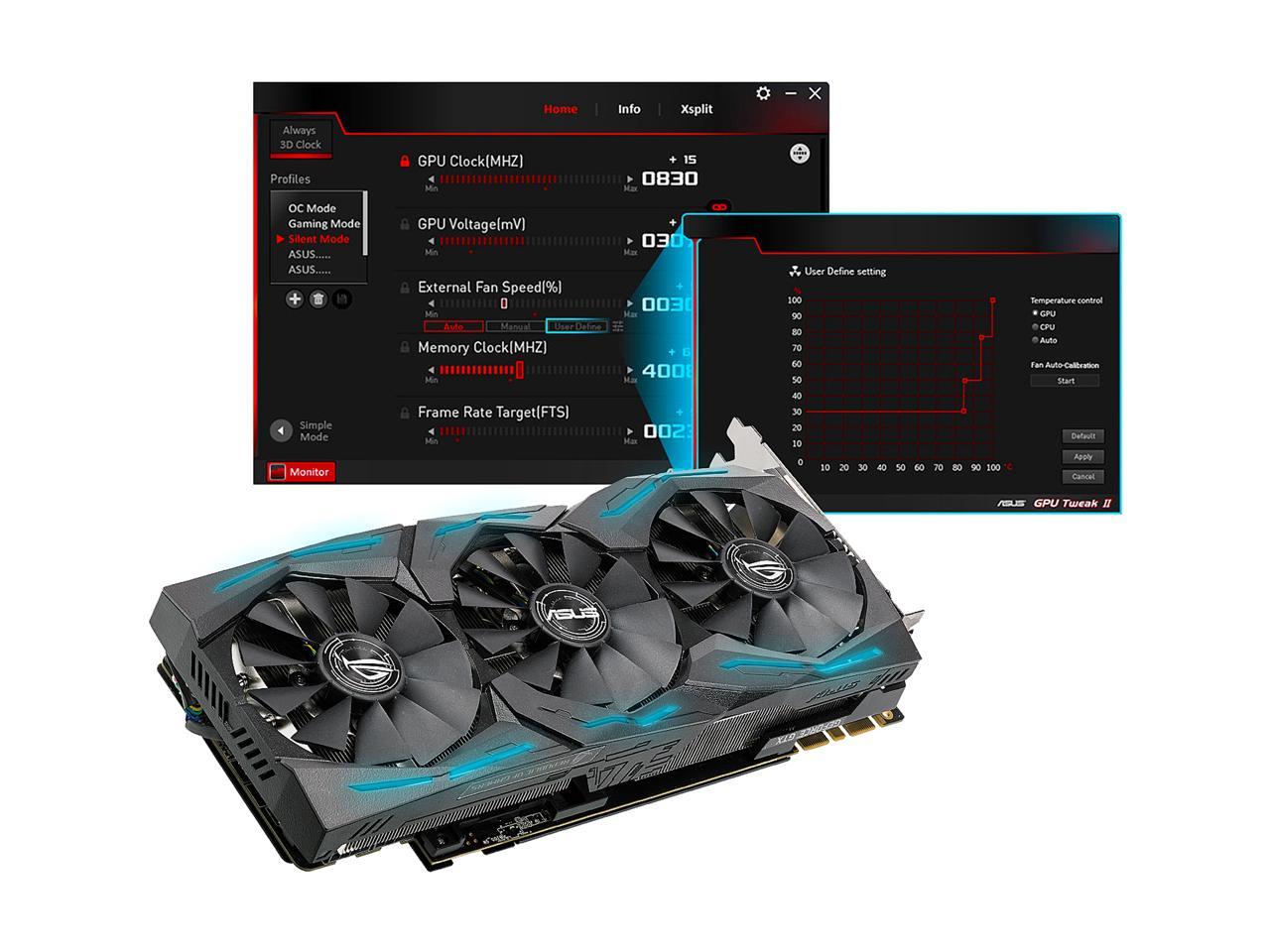 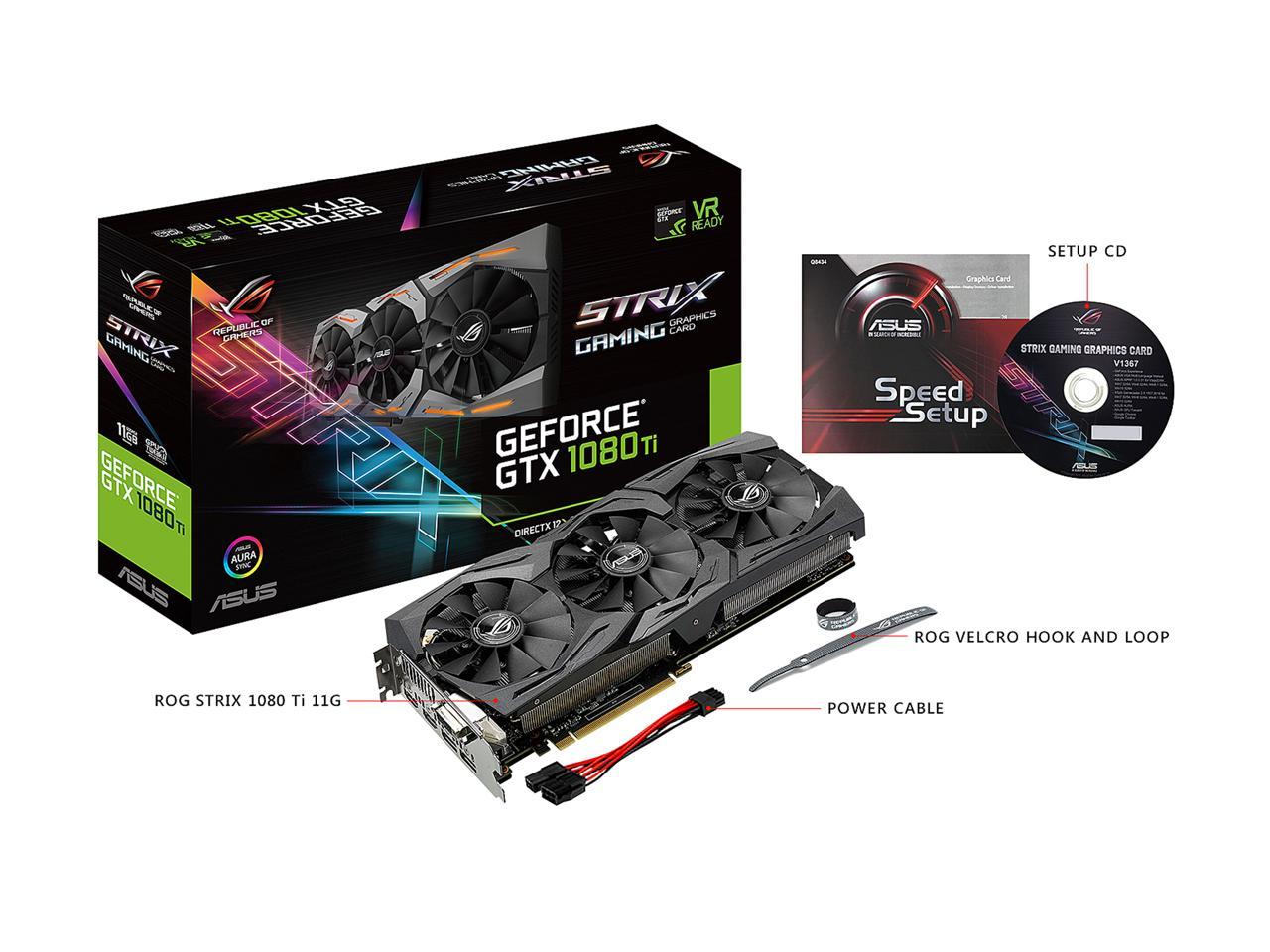 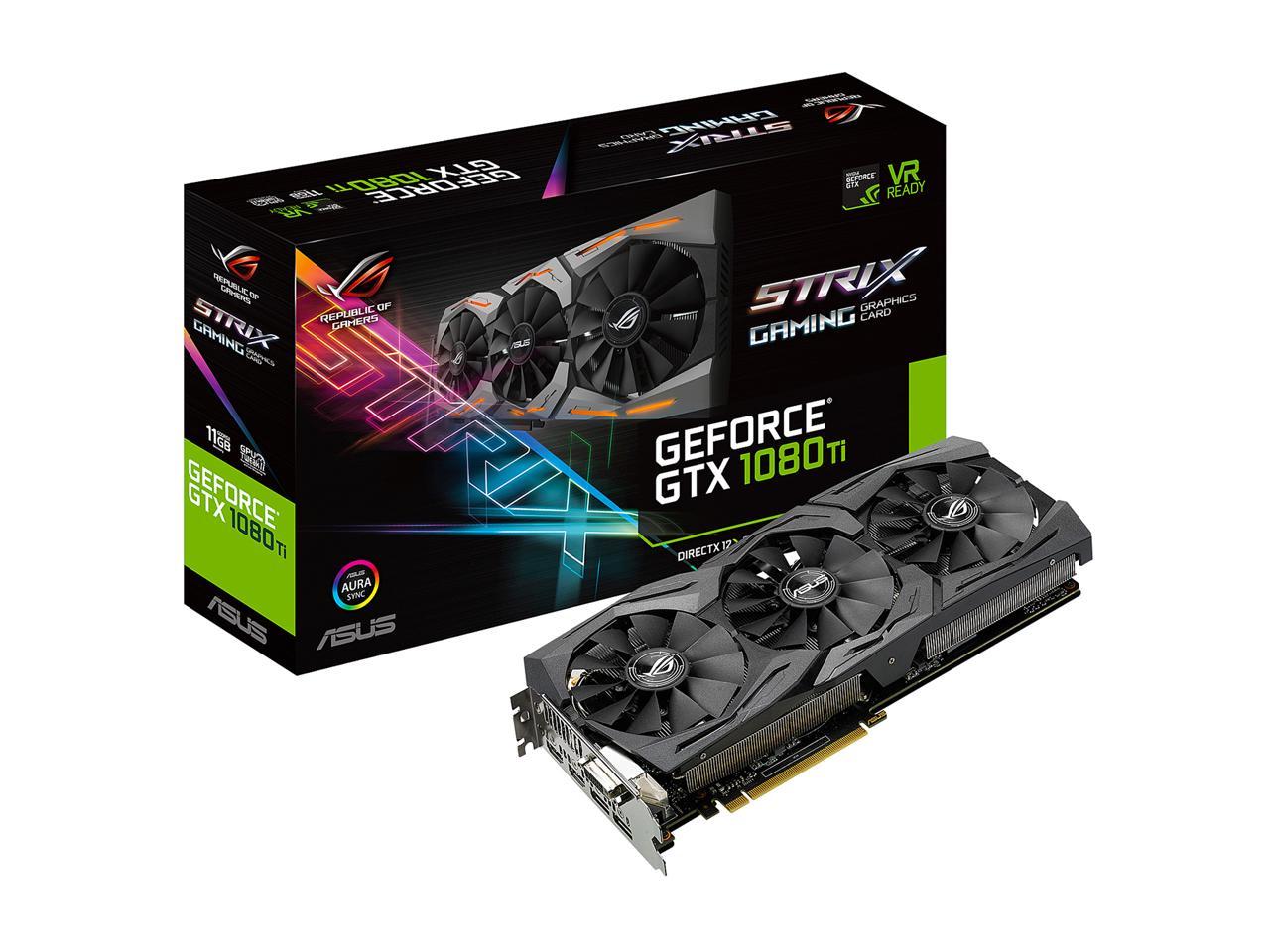 Learn more about the ASUS STRIX-GTX1080TI-11G-GAMING

Pros: - Blazing fast and cool, able to get a stable overclock at just over 2000 MHz after 10 mins at 99% load in SLI. With an aggressive fan profile, the top (hotter) card in SLI stays under 70C without as much noise as I was expecting. - Aura RGB can be set to reflect core temperature without GPU Tweak. It's a nice (rough) temperature indicator for when you can't/don't want to open up monitoring software. - FanConnect works without GPU Tweak. You can't set a custom profile, but the fans spin up at 60C and stop again when the temperature reaches idle levels. - Single card sped up my Redshift renders by 25-40% compared to the Strix 980 Ti OC.

Cons: - Thicker than previous-generation Strix cards, so having two of them in a motherboard with three slots per PCIe x16 makes them sit VERY close together. Top card temps are consistently 8-10C hotter than the bottom card, up from 5-7C in my setup with a 980 Ti + 780. Still, it's not as thick as some other options (Gigabyte Aorus, Zotac Amp Extreme).

Overall Review: I needed two cards to upgrade my dual-GPU rendering setup, so these seemed ideal based on my past experience with Strix's very good cooling and the fact that they aren't quite as thick as some of the other custom options. I was pleasantly surprised to find that these overclocked to speeds comparable to the OC Edition, although that might be luck of the draw. FanConnect is also a nice feature; I use it to connect to a large side fan, and having it not running all the time cuts down on dust (and power usage). It's great that it works without GPU Tweak, as I much prefer Afterburner. I've now owned 9 Asus GPUs and 2 Asus motherboards, and I've only ever had a problem with one GPU, which developed a fan problem and was replaced by Asus within a week of RMA. Hopefully that track record continues and these last for a long time. Overall, this card seems like a nice improvement over the FE, with vendor-specific features that can actually be pretty useful. If you aren't obsessed with getting those extra few guaranteed MHz from the OC Edition, you can save some cash by grabbing one of these.

Pros: -I've owned this GPU for about close to 8-10 months now, and I can say that it is an ABSOLUTE MONSTER. This card will run just about everything at 2540x1440 resolution at about whatever your monitor can handle -For reference, I can run Destiny 2 @144 FPS, Arkham Knight, maxed out @ 70-110 FPS, Witcher 3, maxed out with heavy texture mod loads @ 130-144 FPS, Deus Ex: Mankind Divided maxed out @80-110 FPS, and other high-fidelity games like Rise of the Tomb Raider @ 120+ FPS -This card almost NEVER runs very hot, and I have it overclocked as far as I can get without a crash error -GeForce Experience app is very handy in getting your driver updates so you don't have to go screw around on websites. I found downloads go through much faster via the app rather than the website.

Overall Review: -I didn't want to consider this a con, but for the power you're getting in this card, it is BIG. If you're building a PC or a PC for the first time, please write down the measurements of your case, your motherboard, and this GPU. Make sure you have ample room length wise, but also height wise in case you don't have a case with a lot of depth in it -Consider buying case fans with this. While it should be a given you should have them anyways, and this card doesn't run hot, you'll feel less paranoid about it if you have that extra airflow going in and being drawn out

Pros: - Powerful, Perfect for 1440p ulstawide and 4k gaming. - Cools extremely well. - Doesn't sag much, even with a heavy cooler. - Overclocks well, mine stays above 2000mhz at 45% fan speed

Cons: No big complaints, just a couple of couple of nitpicks. - Card can get pretty loud at 50% fan speed or above. - My card has a lot of fan motor noise at 20% and below.

Overall Review: Everything that ASUS produces always seems to be among the best, at least in my experience. Another great product.

Pros: Great card. Runs Furmark at 66C in an open air Core P3 case mounted sideways up against the glass with fan speed ~44%. Fast. Replaced a brand new MSI DUKE 1080 TI that smelled like burning plastic at any temps above 55C. This card is twice the quality of that card at the very least. If this card is in your price range and isn't too high above MSRP as it has been in the past, I would highly recommend it.

Cons: The Aura lighting program to configure the RGB LED lights should just be part of their Tweak program. Kind of annoying to have to install both. I noticed the 8pin cable they provided was multicolor and unshielded. I mean at the high end who would use it... Still they could have just made it black. That is all the nit picking I can do.

Pros: extremely fast. can handle whatever you throw at it besides going over 4k of course. silent. beautiful. The aura software is easy to use.

Cons: The sli is not great unless you are planning on 4k

Overall Review: A great card that will not need to be upgraded for the foreseeable future

Pros: Very powerful runs most games at 60 fps+ at max settings with no problem (by most games I mean games like black desert, fallout 4, Tom Clancy Wildlands etc) very very nice Very cool and quiet... running at around 68-70 C at full load Just a beast sexy RGB lights and overall a sexy looking card... I love the bulky look

Cons: Had a coil whine so I RMA'd it for a new one.... customer service is awesome though