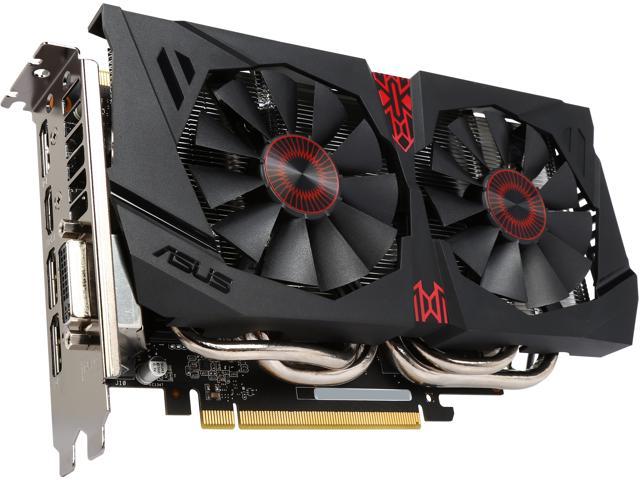 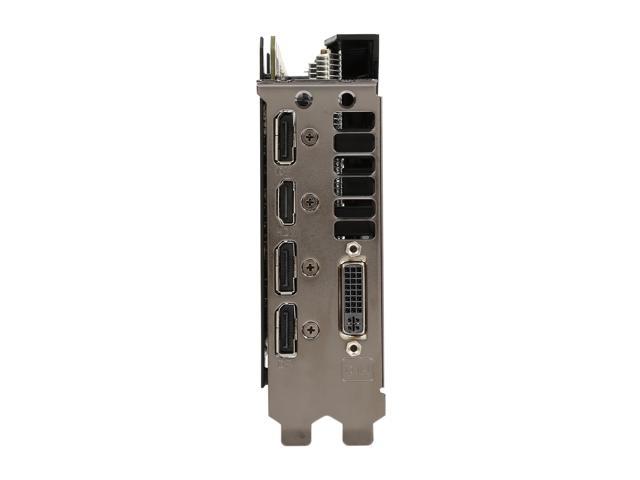 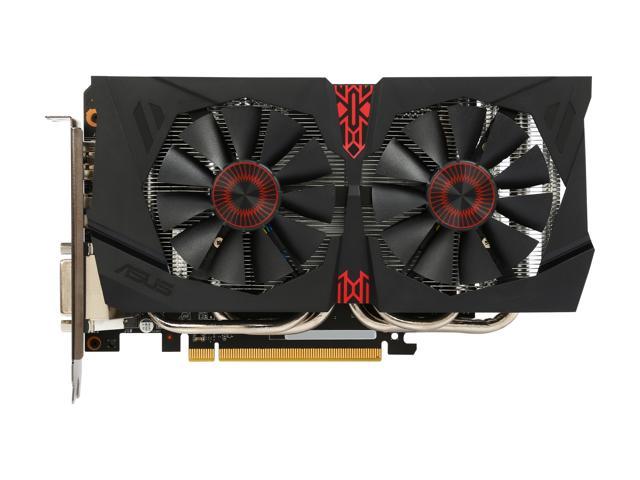 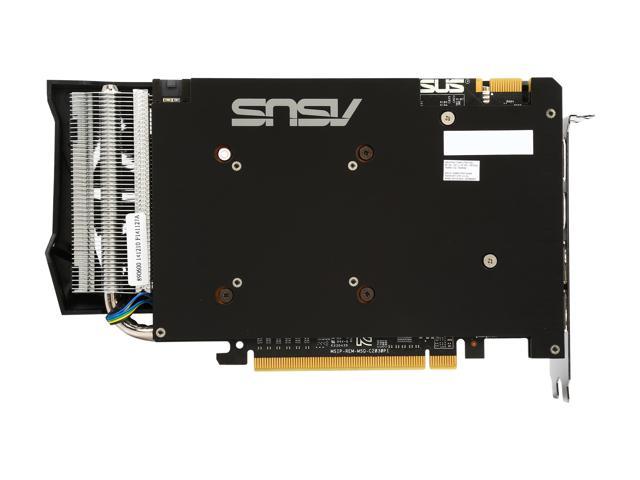 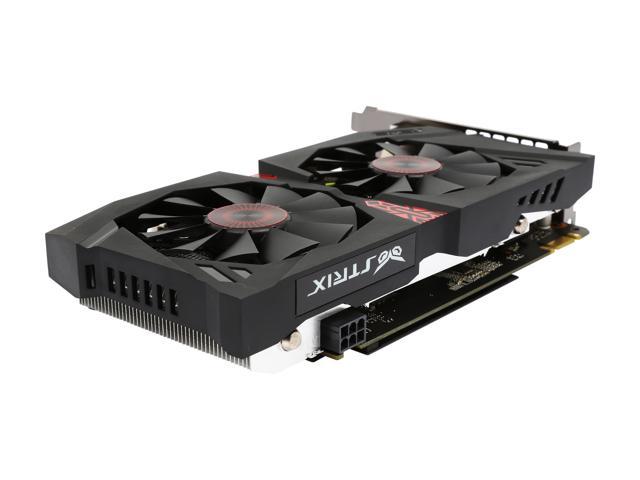 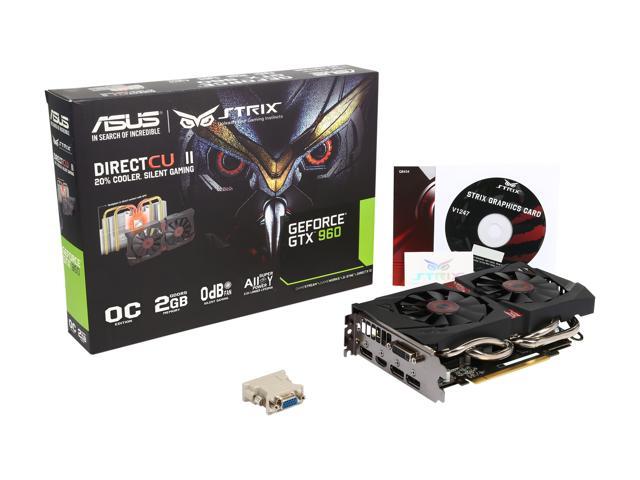 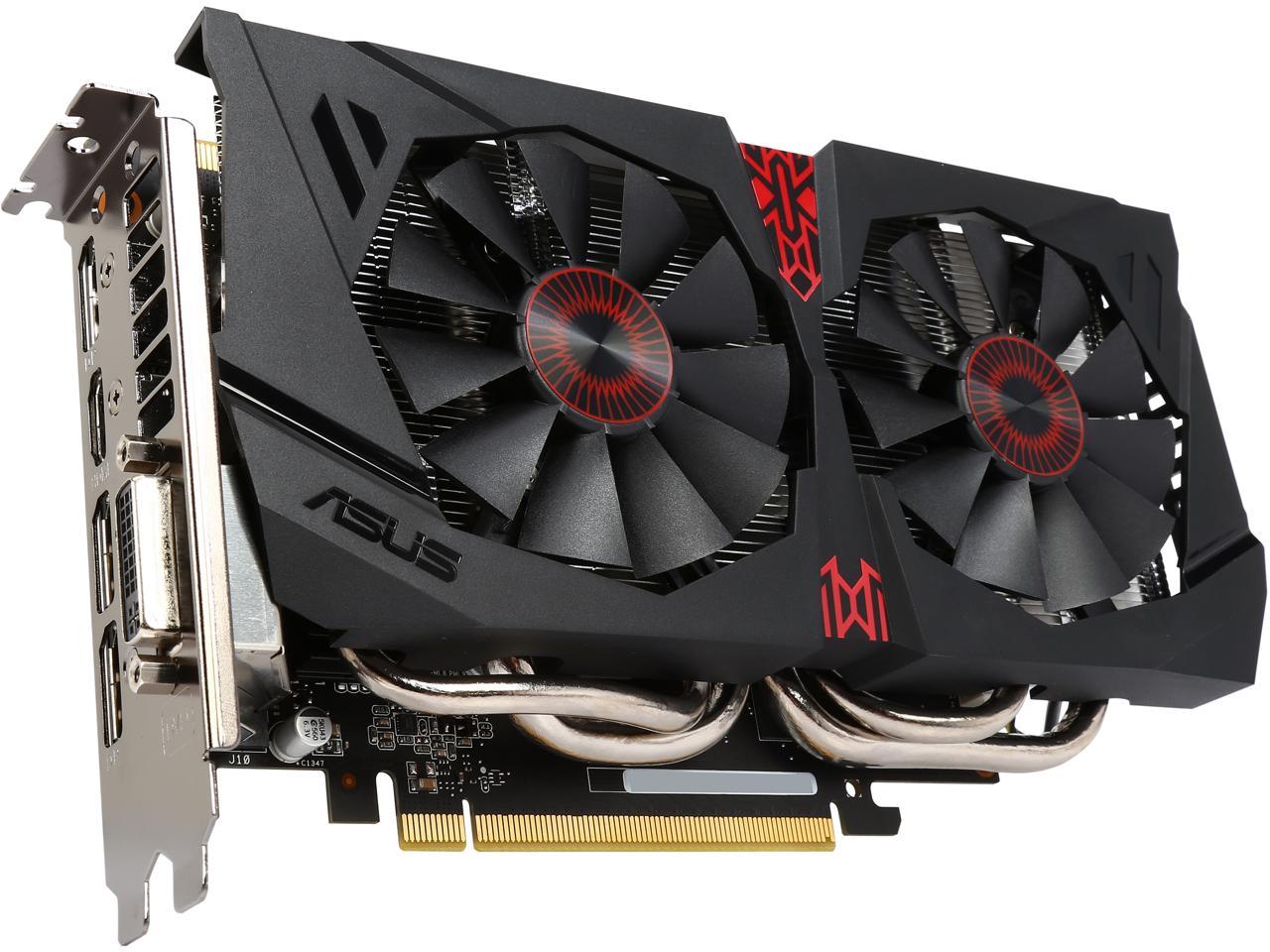 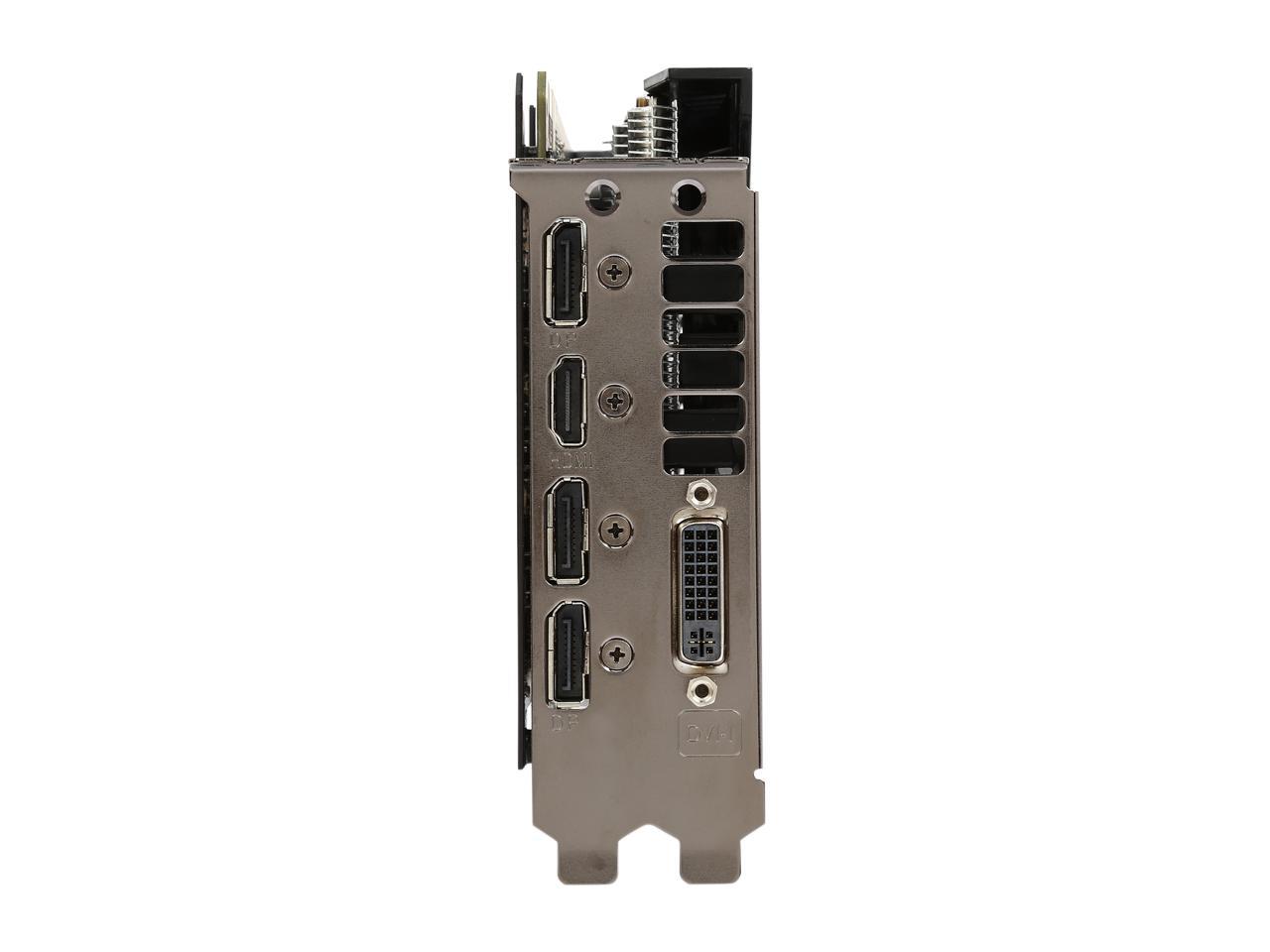 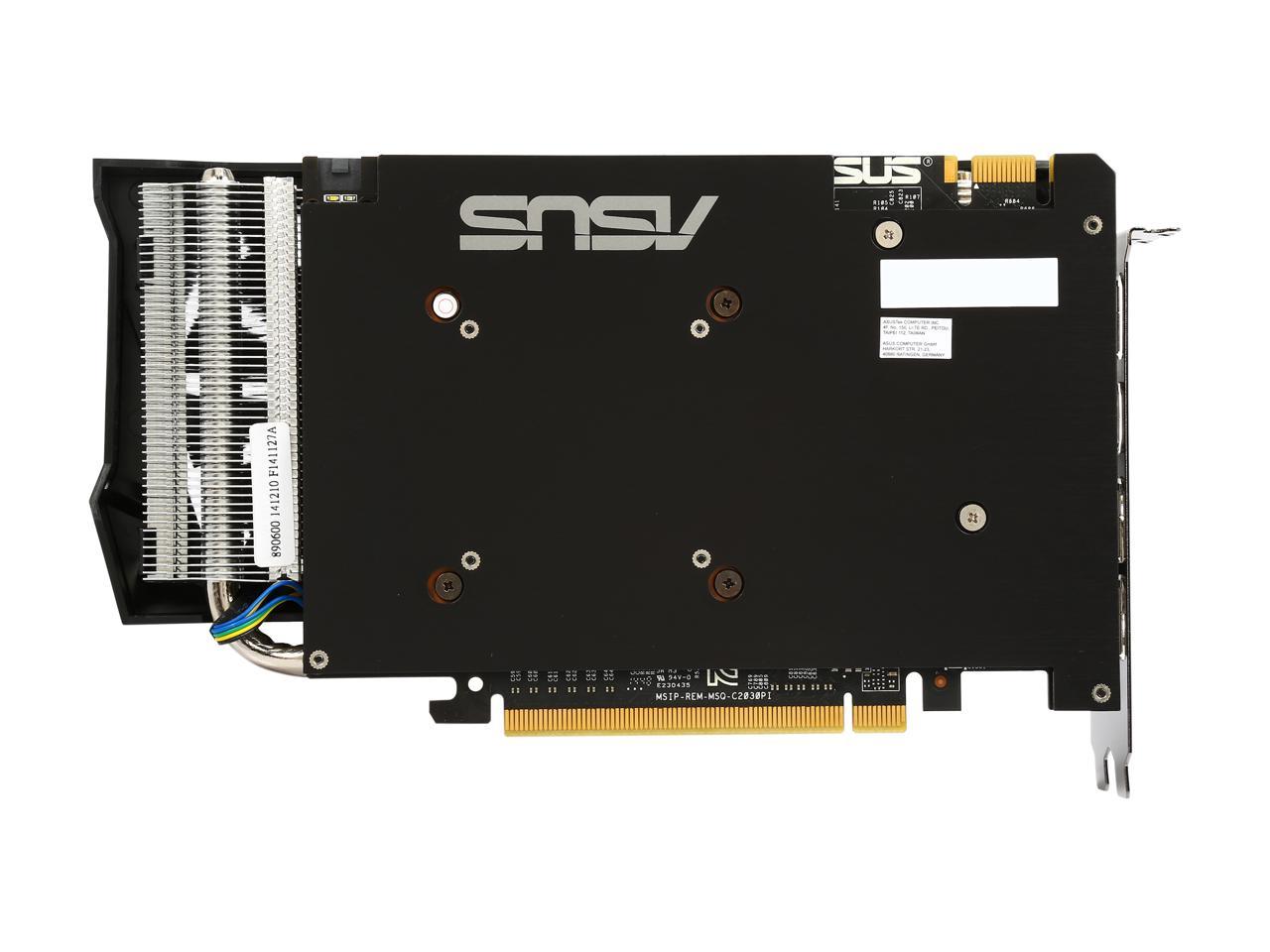 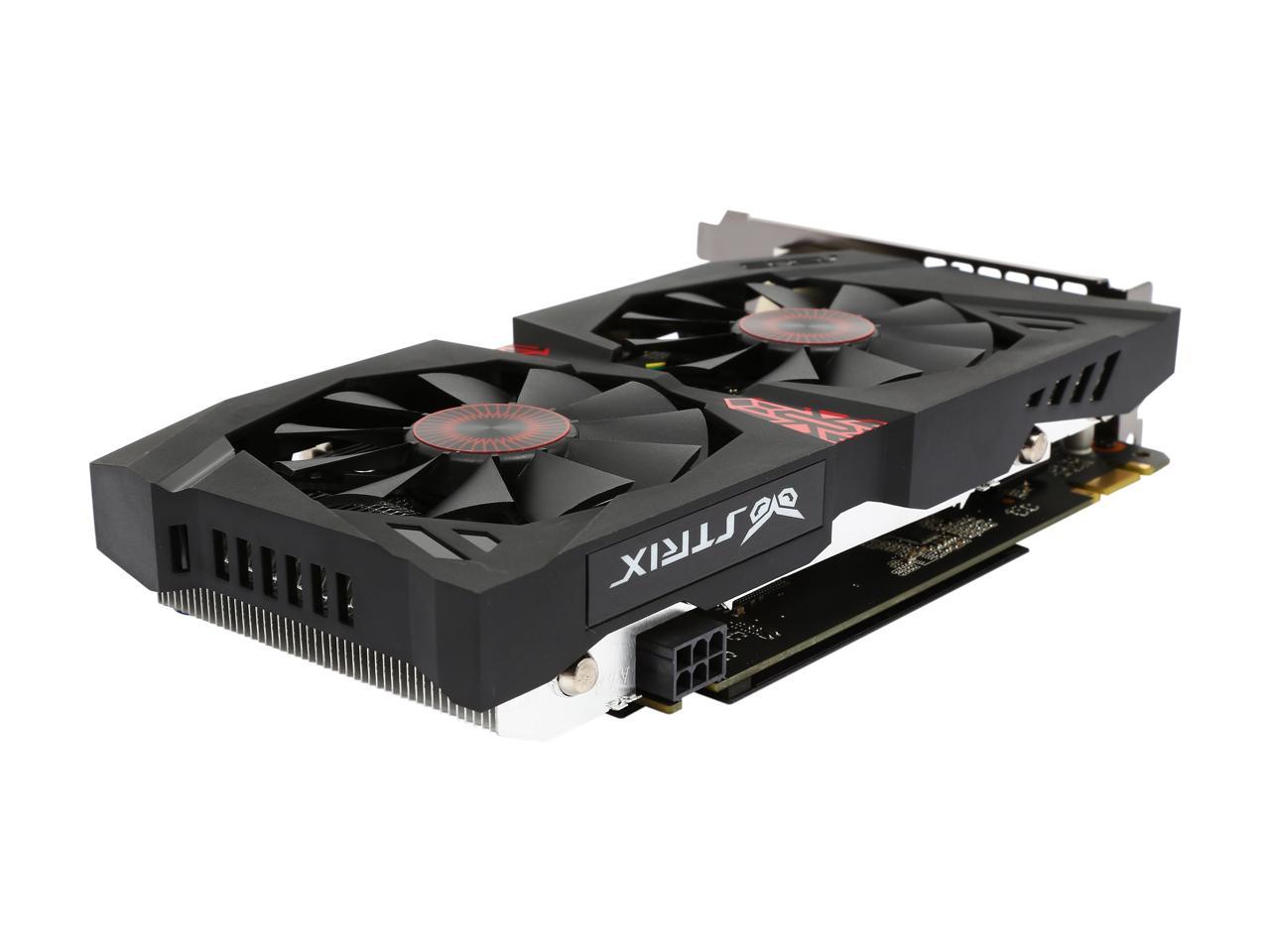 The new card features feature exclusive ASUS Super Alloy Power components and backplate design for enhanced durability and cooling, and GPU Tweak with XSplit Gamecaster for overclocking and online streaming that's as simple as it is flexible. Strix GTX 960 comes equipped with a DisplayPort interface to support connections up to 4K/UHD (ultra-high definition) resolution.

Strix GTX 960 is factory-overclocked at 1291 MHz and has a 1317 MHz boost clock speed in OC Mode that delivers stunning gaming performance. Strix GTX 960 provides 12% faster gameplay in Assassin's Creed® Unity and Battlefield 4™, and runs the 3DMark 11 (Extreme) benchmark at 1920 x 1080 Full HD resolution 6.5% faster than reference designs. It is fitted with 2 GB of high-speed GDDR5 video memory that races along at boosted speeds of up to 7200 MHz. Exclusive DirectCU II cooling technology outperforms reference designs with an exclusive 10mm heatpipe that transports 40% more heat away from the GPU — a first for the industry! The design also includes 220%-larger heat-dissipation: this means performance that's 30% and three-times (3X) quieter than reference for ultra-stable hardcore gaming with very low noise. And Strix ups the ante still further with 0dB fan technology that lets you enjoy games like League of Legends® and StarCraft® in complete silence — because the fan stops completely when the GPU temperature remains below a set level. XSplit Gamecaster lets you easily stream and record your greatest gaming moments at the click of a button. It's simple, easy to use, and perfect for sharing your gameplay with the world. ASUS GPU Tweak helps you modify clock speeds, voltages, fan performance and more, all via an intuitive interface. Download XSplit Gamecaster today and get a 1 year FREE XSplit Premium License. Learn more about the ASUS STRIX-GTX960-DC2OC-2GD5

Pros: This card was an update from a old r9 260x which liked to be quiet noisy may. The r9 260 was ok for gaming at 1600x900 which in todays terms is a litle less than 1080p. With this card bieng so quiet my wife asked me to install a noisy fan so she could fall asleep. Now Performance wise I am able to turn everything to ultra, yes, on my 1600x900 monitor. I get 50-70 fps solid never dipping below. I havent tried to over clock because even Dying Light is able to run at 2k DSR resolution with a stable 55fps. My g3258 will run 4k Far Cry 4 on my monitor at a steady 55 fps with this card. Asus has truly impressed me and I am now a return customer for all future needs. If the 128 bit is the only thing holding you back then all I have to say is this. Less is now more when it comes to tech. DX12 and all the optimizations nvidia has done make this so. If you still like big number bragging rights then by all means brag about how big it is to someone else. Get ready for DX12 with this awesome card and dont look stricktly at bandwidth anymore, which today is like only looking at cpu frequency, we have moved passed that and now bandwidth is getting there to.

Cons: Need More Stickers to Promote Asus Strix. Maybe A car sticker and a sweater voucher would be nice.

Overall Review: TLDR: Worth every penny. I am a budget Gamer, my case is not fancy. My power supply is only 500 watt. My processor is a g3258.My Monitor 1600x900, I can crank all setting on ultra and runs 50-60 or above fps on Dying Light, Cryisis 3, Far cry 4 and 4k DSR Far Cry 4 at an average 0f 50-55fps, which may I add Looks like a real game from this century as I can not believe how beautiful it actually looks.

Pros: Keeping in mind that I upgraded from a GT 530: -Great Performance/Price ratio -Stays incredibly quiet. During normal use of my PC (browsing, word processing, etc.), the fan doesn't even kick on. -Lower power usage compared to other cards. -Overclocks (even more) nicely, though it is finicky due to the boost clock (which gets overclocked by the same amount).

Cons: -It's not a GTX 970/980. -The 2GB of VRAM is a little meager compared to most other modern offerings. -Narrow 128-bit interface. -Overclocking is finicky with Asus GPU Tweak, and I have yet to find a way to disable the boost clock.

Overall Review: The cons really aren't cons, except for the overclocking quirk. If you buy this card, you do it for the lower power consumption or budget (or at least you should), and know what you're getting. Coming from the GT 530, this thing is a godsend for gaming. I was on a budget to get a better GPU, and didn't feel like spending the money on a 970. The narrow memory bus and 2 GB VRAM worry me for future-proofing; for now it's doing the job very well. However, if you have the extra cash, definitely take the step up the 970/980.

Pros: Installing the ASUS STRIX-GTX-960-DC2OC-2GD5 was quick and easy. Using the NVIDIA control panel, I quickly configured my TV and my monitor as dual displays. PowerDVD played my Blu-ray movies without a hitch and some simple video games played without problems, also.

Cons: So far, none (it has been only a week, so take that into account).

Overall Review: My purpose in buying the ASUS STRIX-GTX-960 was to upgrade from an Radeon HD 6850 video card. While I haven't done any FPS measurements, the GTX-960 appears to be performing well and the price was close to $200 which I considered to be a good, budget, price.

Pros: Pros- Low power consumption, if your psu is higher than 450 watts, then you're good. Runs everything on high settings, and the card runs pretty decent on games like Battlefield 4, Crysis 3, and The Evil Within. I can't wait to play the Witcher 3 with this baby! Also I was expecting this video card to be big, but the card itself is actually quite small. Overall- Small card, low power consumption, runs great on most demanding games, and great value along with the free witcher 3 code ^_^

Pros: Made my computer so much better wonderful graphics and looks great on every game.

Cons: Nothing wrong from what u can see.

Pros: small 1- 6 pin stays very cool cant hear over my pc fans also does ultra 2k hd on some games great if you have nvidia shield

Cons: none so far but i dont have a 4k monitor only 2g of ram

Overall Review: im not going to say this runs all my games with all the eye candy even running in sli cause i bought 2 , but does a great job on most of my games there perfect for small builds may have to buy the 4g when they come out

Pros: This card is much shorter than other 960s - I think about two inches shorter than the MSI version. I had concerns about the MSI version fitting into my mid-tower, so this was an obvious choice. I was skeptical of the heatsink/fan design at first glance, but I actually find it quite attractive now. Card runs cool! While playing GTA5 it's never even reached 60 Celsius. Also very quiet. Silent when not playing games, and not very audible during games. I overclocked it an extra 50 MHz without any issues. I'm sure I could go further but I don't have a need yet. Plays GTA5 on some high/some ultra settings very smooth. Witcher 3 is a good bonus if you buy it during the right time.

Cons: They decided to put a bright white LED to notify you that power is connected correctly. However, it could be annoying if you sleep next to your PC as it is always on. If you don't mind putting a very tiny piece of electric tape over it then it would be a non-issue.

Pros: using this card for about a month, play i my games high res, quiet, small, easy to overclock

Overall Review: I got this card for upgrading my old 560ti. I didnt wanted to change all my pc so, in the middle range price this card is the perfect fit. Wasnt sure first and was looking at the 970, but since a play in 1080p, i run dying light and far cry4, high res with no problem at all.