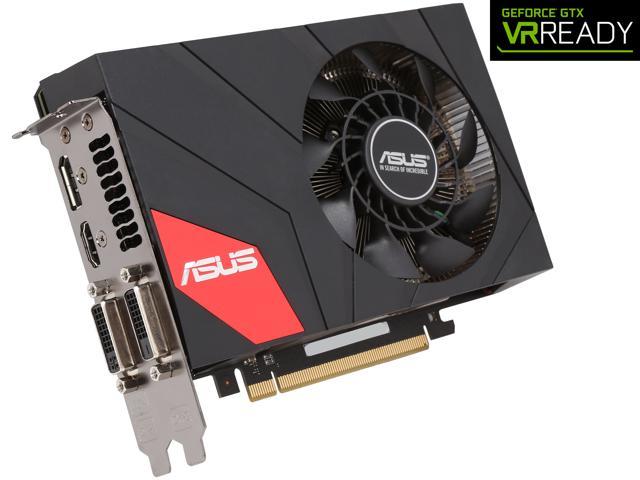 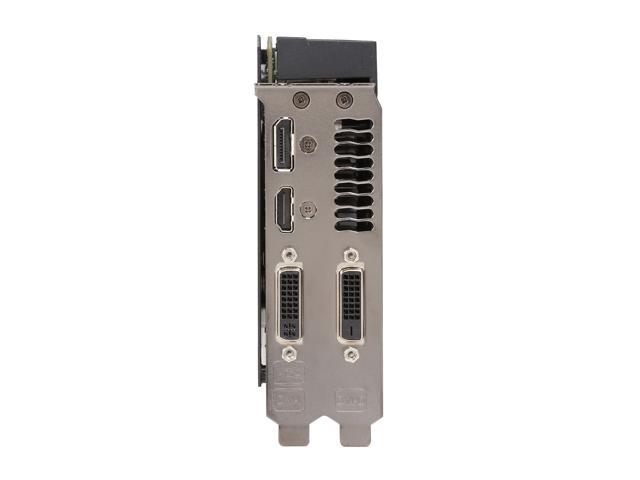 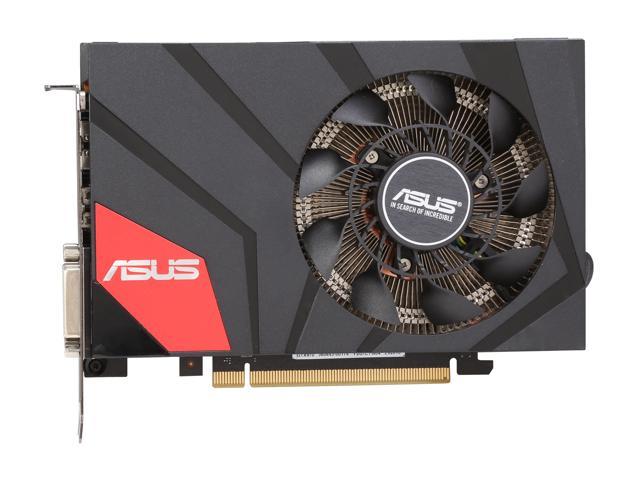 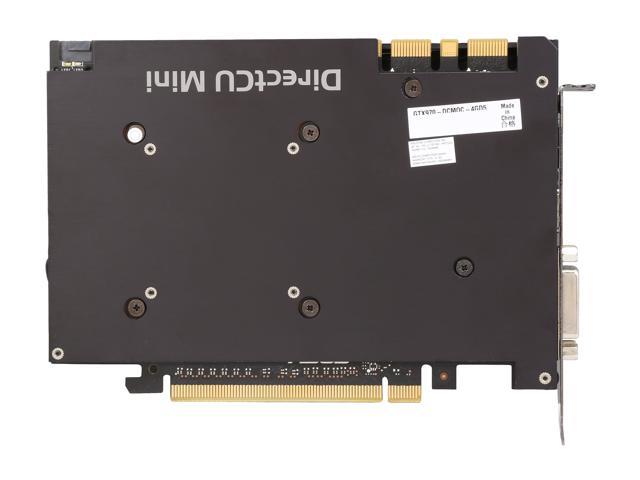 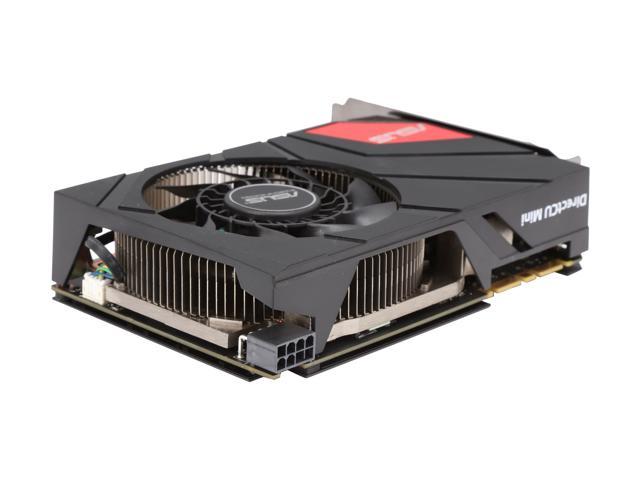 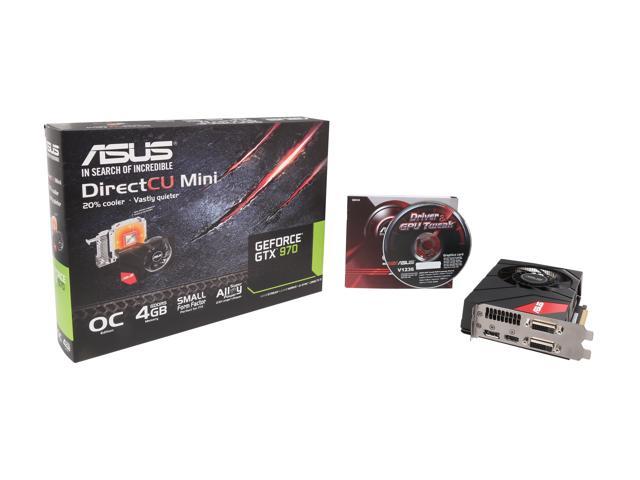 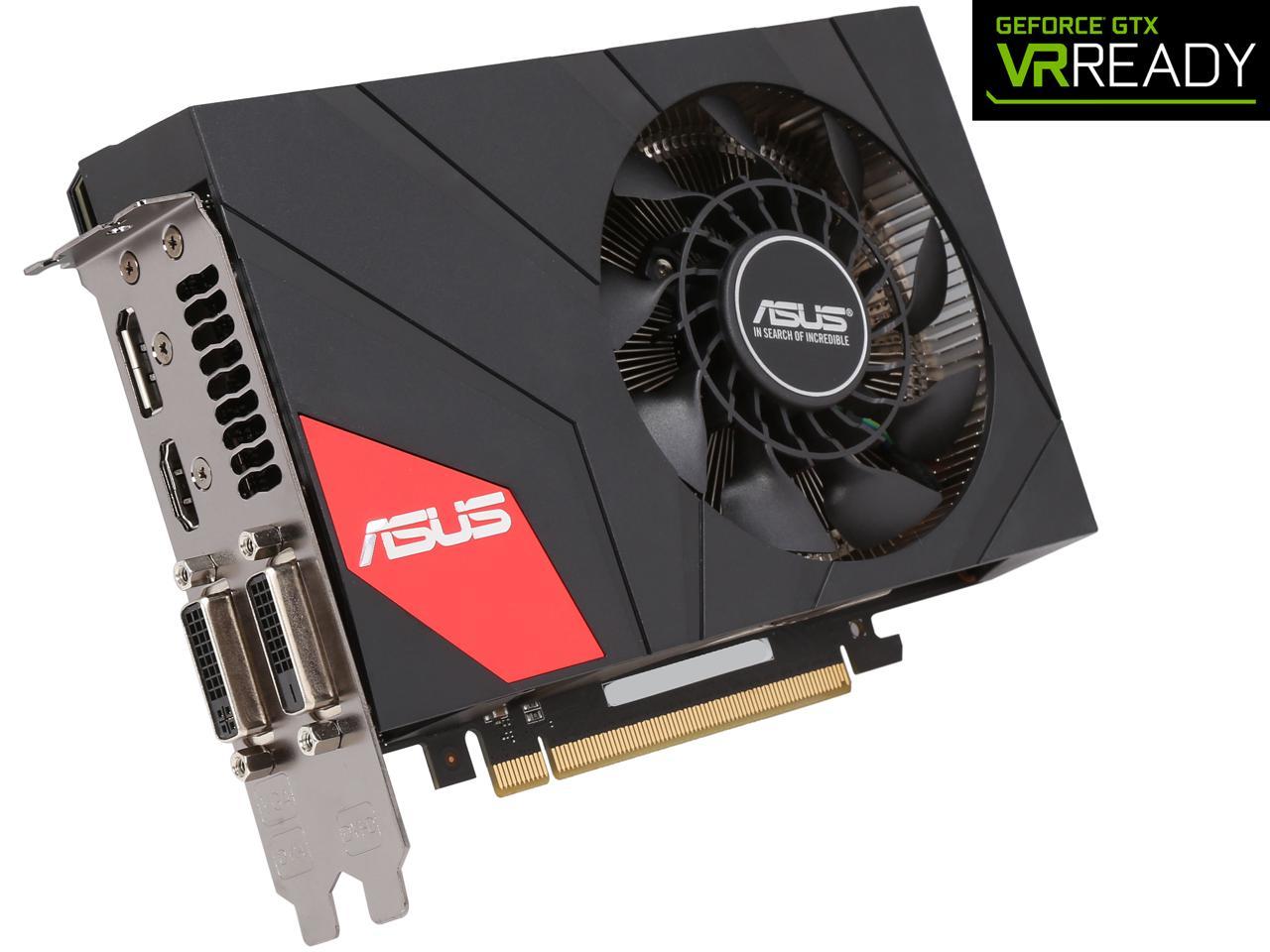 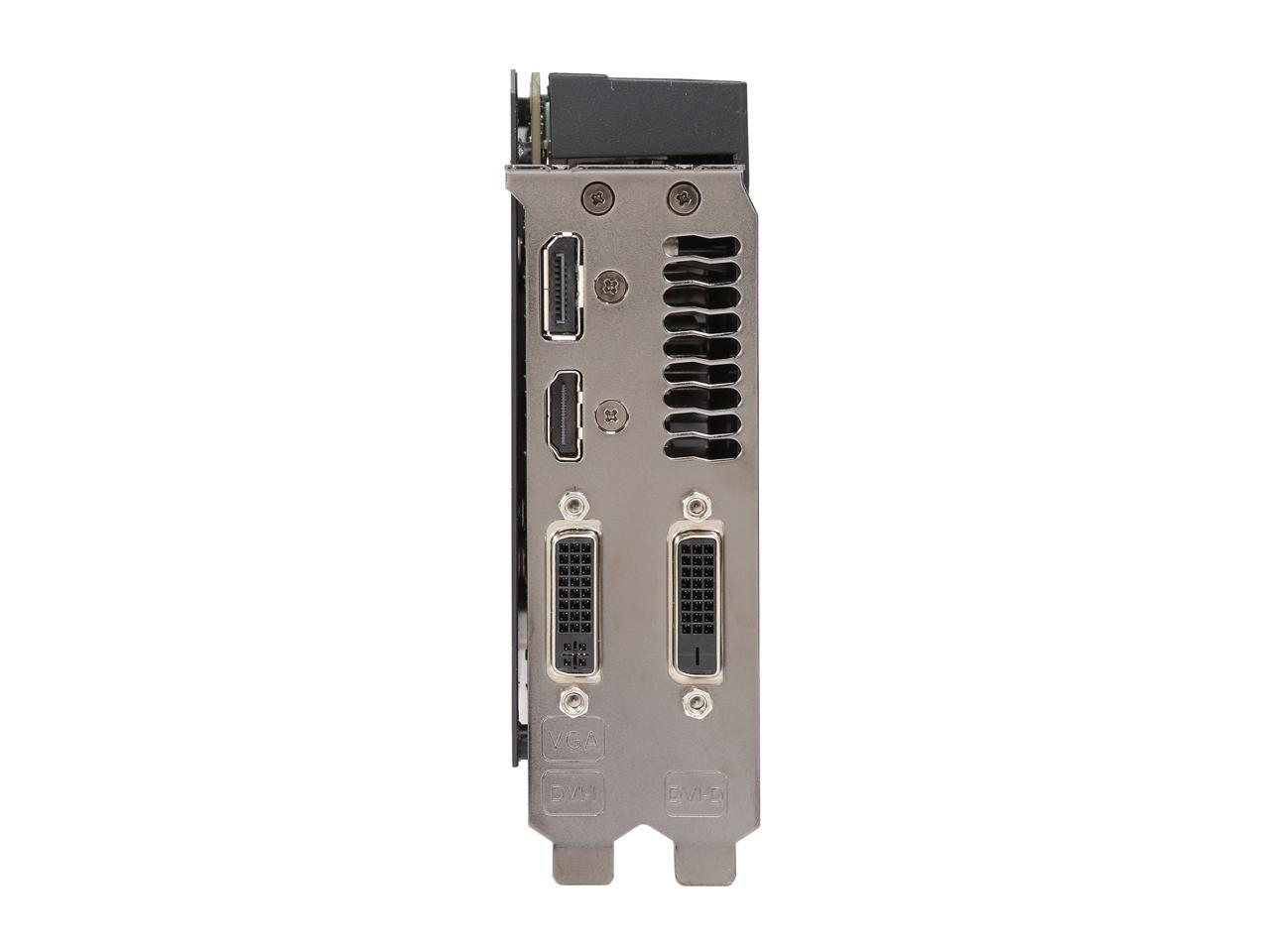 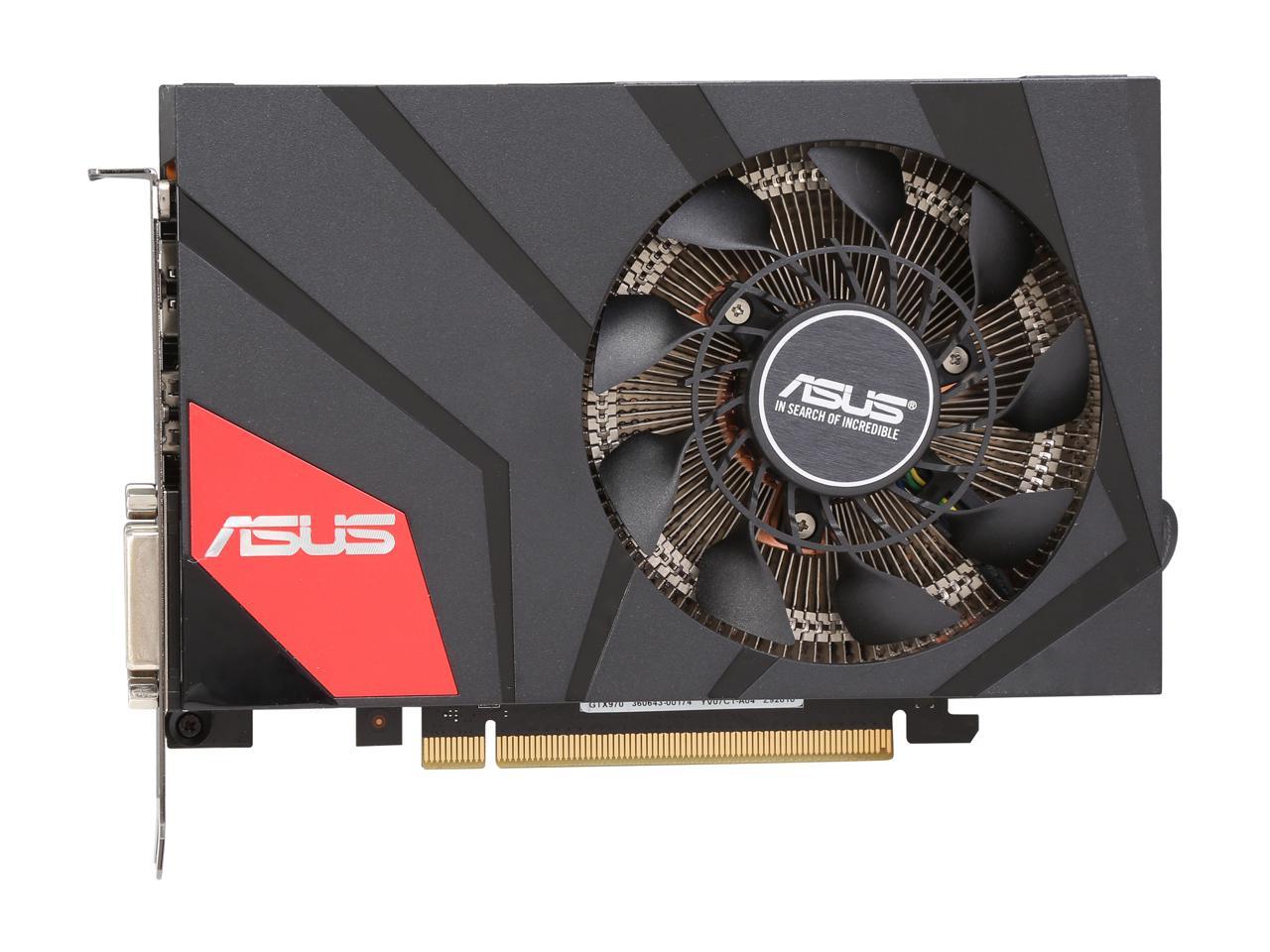 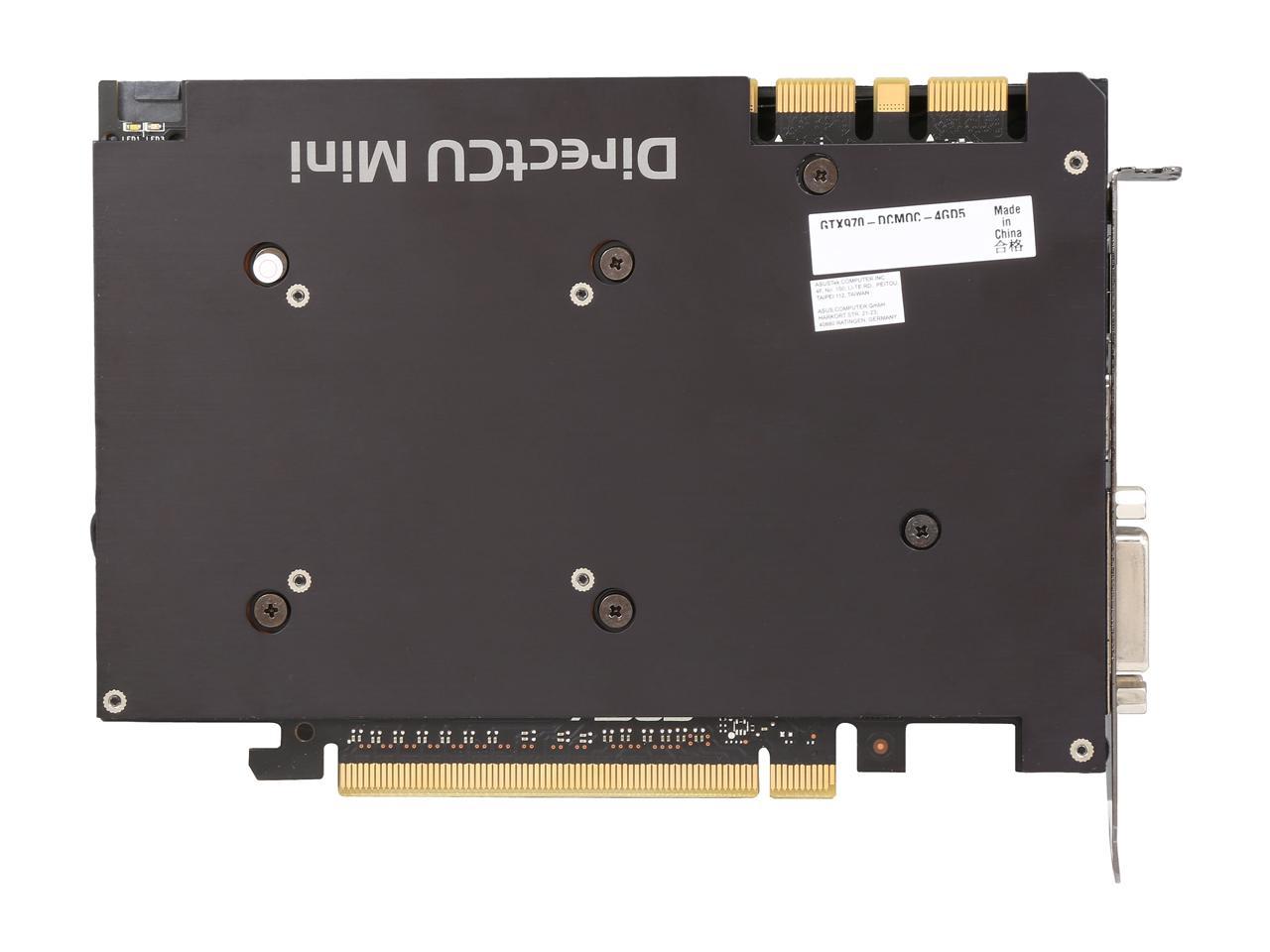 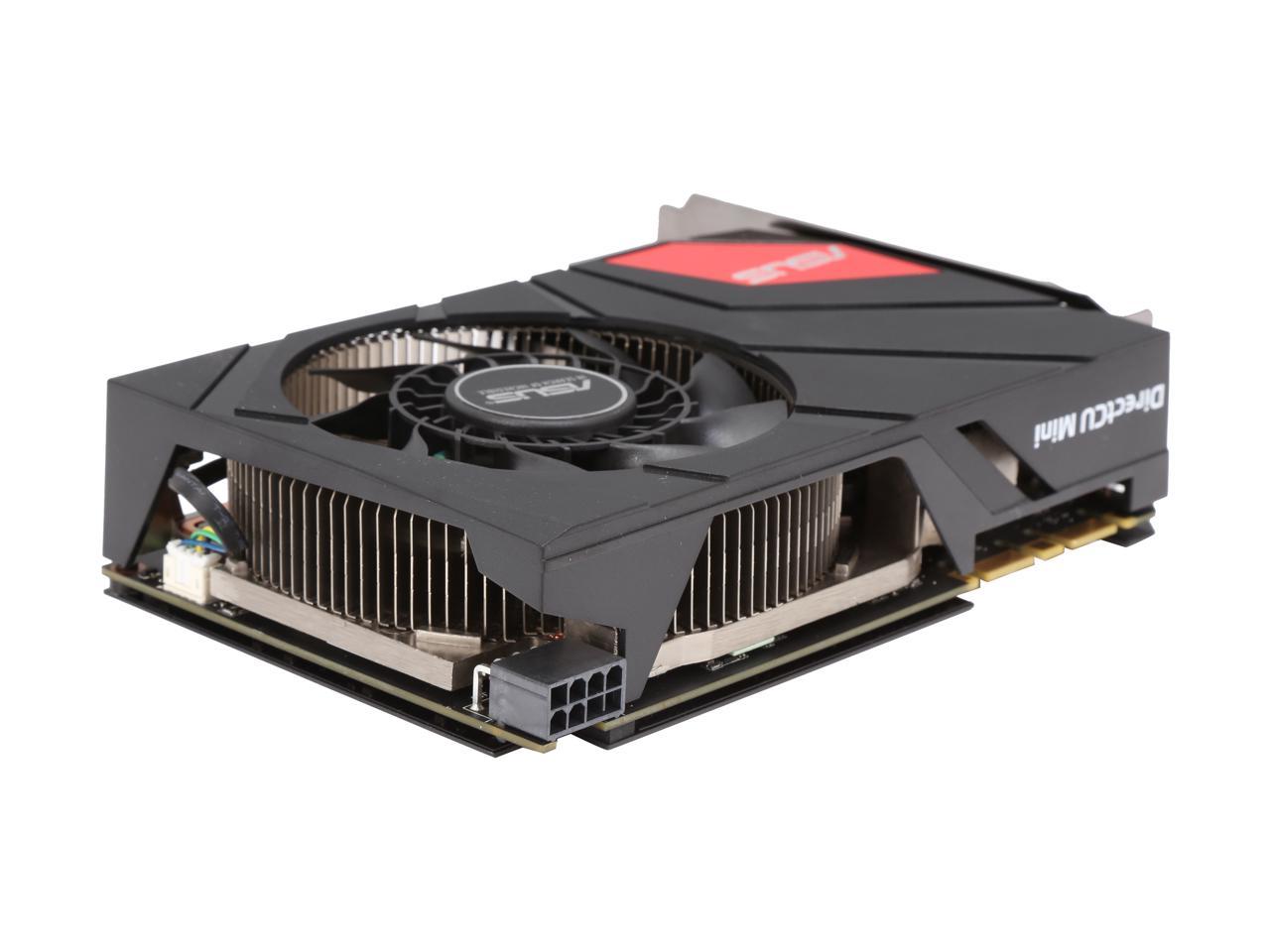 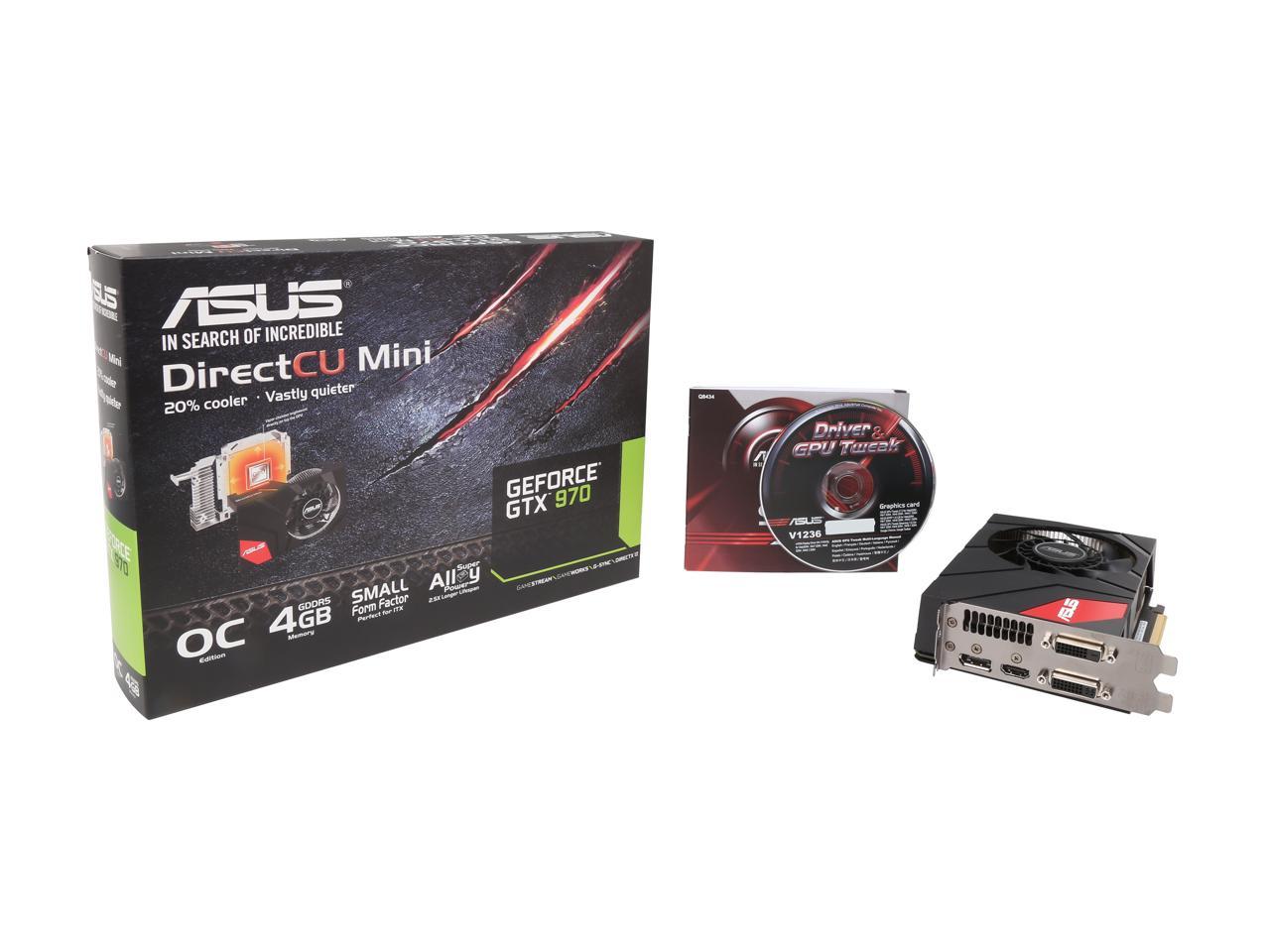 Learn more about the ASUS GTX970-DCMOC-4GD5

Pros: Awesome card!! Even in my outdated system Phenom II X4 965 8GB G.Skill DDR2 PC800 Win 7 pro. Runs everything Buttery smooth Shadow of Mordor at high/ultra settings MKX Ultra. Amazing what this card did for my system upgrading from a EVGA 560ti 2gb.

Cons: No cons really. Only con would be the shipper Newegg decided to go with. OnTrac really sucks the guy walked halfway up my lawn and threw my $330+ dollar video card onto my porch. Horrible service newegg needs to drop OnTrac.

Pros: I like this graphics card! I built a mini-ITX computer using the Cooler Master Elite 110 computer case (it's basically a small cube.) I am all about downsizing this year and I don't like big bulky computers laying around! Anyway, this graphics card is powerful enough to handle modern games and it doesn't make a lot of noise while playing games! I would have to compare the noise level to a regular gaming console and I even have my new cubed computer sitting up on my desk next to me. So glad I went with the Asus over the Gigabyte. This Asus graphics card has a back vent which keeps the graphics card 20% quieter! Go with this one over the Gigabyte!

Pros: I've had this card for almost 10 months now. Figured it was time to give a good update. Put through three different cases now. Mini design fits in almost any case. Fan pulls heat away from the card rather well. Has a backplate!!! Pulls less power than previous series gtx cards. No Coil whine for me. Able to tackle most games on Ultra settings. 58avg fps in Skyrim heavily modded "600 fps" in LoL 60 fps in Metro 2033 and Last Light about 30avg fps in Ark Survival Evolved, had to tweak some settings about 30-40avg fps in Rust avg around 50-60fps in Fallout 4 on Ultra (definitely uses 100% of card)

Cons: Be sure you have good air flow in your case. While this card does very well at pulling heat away from the card, if your case can cycle the ambient hot air with cool air, it will start to get hot over time. This wasn't an issue for me until I got a dell xps 8700 used, which had a poor design of only having one case fan that doesn't have good air flow. Playing games on ultra, after about 45 minutes my gpu monitoring program would alarm that temps were going over 70c. Doing much better in my new case After 10 months, this is also due to dust build up on the GPU. The GPU design does well to pull heat away from the card IF air can actually flow through it. I'd suggest checking it every few months,. I've been slightly negligent.

Overall Review: The case I originally put this in had the Power supply in the bottom of the case, which helped greatly to keep good airflow around this card. I "upgraded" to a used dell xps 8700 which had an i7 I was really looking for, and that case didn't have nearly as good air flow. I've upgraded to a new case which has MUCH more room and the card is working great again. This card performs just as well as it should. Good GPU performance definitely also relies on good CPU and RAM. I previously had an i7-960, which limited ram speed to 1066. My newer i7-47700 and ram at 1600 increased FPS by about 15+ in most games. I have a friend with an AMD A8 Processor, and his 980 does worse than my 970... so Be sure your CPU can handle what you want to throw at it! On another note, I've decided to water cool my system. Finding a waterblock for this GPU was extremely hard since it's an Asus proprietary design. I finally found ONE company in China that has made one. If you google Asus gtx 970 mini, and look for linustechtips in the results, you'll find a post I made about my findings, if you're interested. Once I can water cool this thing, I'll test out some overclocking on it.

Pros: Great size 1 - 4 Pin power connector Asus double bladed Fan is powerful but yet quiet when system is not in heavy load.

Cons: None for now.

Pros: This has a small physical form which for me is great. I have it in a micro build so it really helps save room. I prefer this to a huge 13" video card. It runs everything like you would expect a GTX 970 to run. I was a little worried that I could have overheating troubles and wouldnt be able to overclock. This has not been the case so far. I have been able to overclock it +120 cycles and about 10hz on the memory with stable results. It runs stable for about 30 minutes when overclocked to +200 cycles, but eventually crashes in to a blank screen. I use a Phantek Enthoo (http://www.newegg.com/Product/Product.aspx?Item=N82E16811854009) with stock fans and no extra cooling. My hunch is with a little bit of extra cooling this card could stay overclocked at +200. But it could be this also hits its limit being small form factor with stock GPU fans. Overall though this card is solid. I have no complaints about fan noise. Currently the stock i5 6500 CPU fan i am using is the most noticeable fan in the computer.

Cons: Nothing so far, but I will update if anything comes up in the future.

Overall Review: I would recommend this product to other people doing a micro-atx computer build. There might be other options if you arnt looking for the smaller profile. But this one is great if you are.

Overall Review: Don't get fooled by the size of this card, it's very fast. This card has a custom designed cooling system. There is a vapor chamber instead of heat pipes and the cooling fan has a specific shape to blow off hot air more efficiently. I've had this card for over 3 months and there was no black screens, blue screens, random shut offs or what not. The GPU idle temperature is about 35°C, when under load it gets up to 78°C with a fan not even reaching half its speed. People who say there is a coil whine, get a normal PSU and/or a motherboard because there is no coil whine for me. I think ASUS made a lot of effort into making this card and I hope they will continue to release this lineup for future GPU chips as well.

Pros: Lets see where to start. 240% faster than the MSI GTX 660 TwinFrozr III it replaced. Surprisingly quieter, I can barely hear it over the stock Intel cooler(i5 3350p). I manually set the fan to 70% when gaming and have yet to see it go past 70*c(65*c average) (in a SG05BB mini itx case)at stock clocks (boost 1251mhz). I have not heard any of the coil whine that others have mentioned yet, even with v-sync off. Plays every game I play in 1080p at 60+ fps average(BF 3&4, Hardline, Fallout 4, KF2, GTA V) with max settings and 4x Anti Aliasing. Seems to be of solid build quality and I like that the back-plate is included.

Overall Review: Not really cons, but there's a small white LED light where the power connector is that's always on. Even when the computer is in sleep mode. I know It's probably for trouble shooting but may be annoying to some. Does not have heat pipes in it's cooling solution, but instead uses a solid thick piece of aluminum combined with an aluminum fin (cpu)type cooler that I was kind of weary of at first but coupled with the proprietary fan seems to cool this card alot better than expected. Does not include 4 pin power to 8 pin PCI-E adapter that many others do.

Pros: Wanted something that could handle current games, but that was not as over-sized as most of the new cards out there, due to my build being a micro-ATX. Needed reliability, high performance, and good cooling, and this fits all the needs.

Cons: In another year from now it may not be quite up to handling the newest games on Ultra settings, but for now it's churning everything out beautifully in 1080.