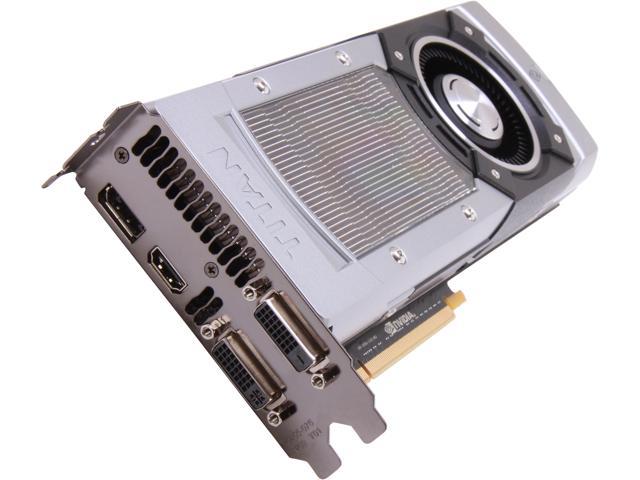 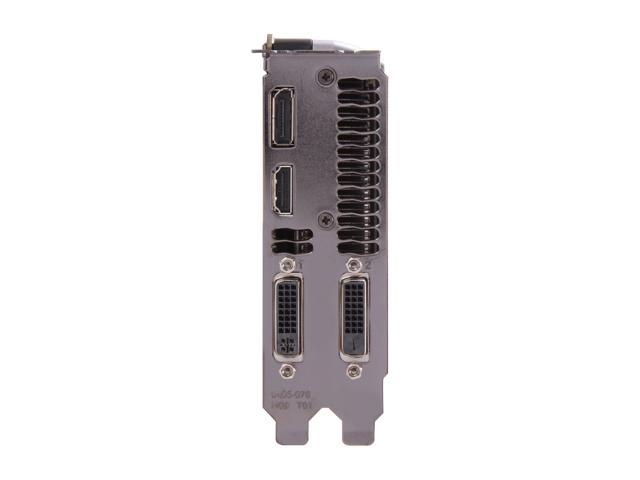 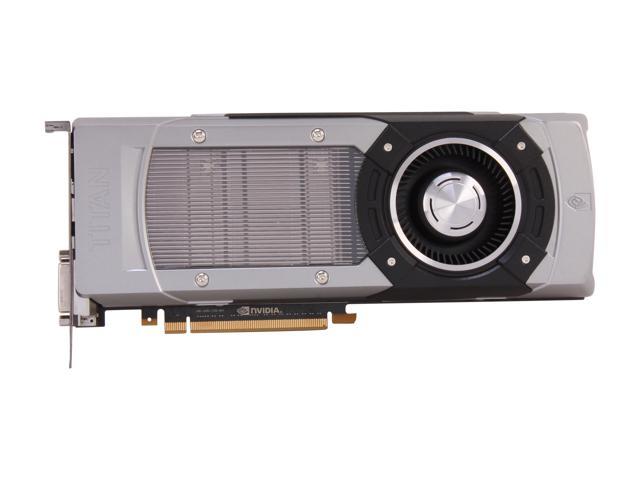 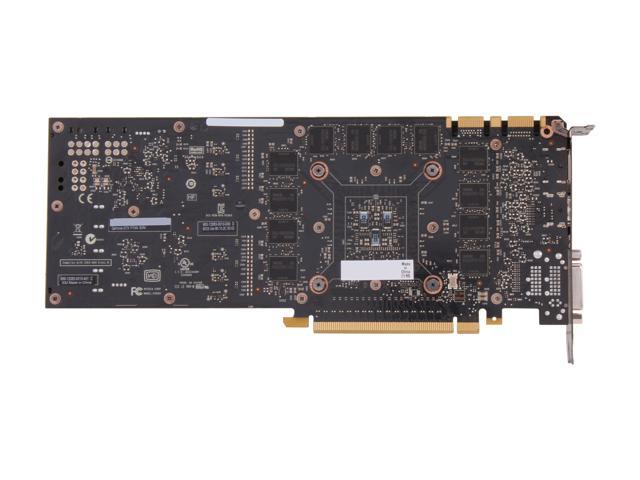 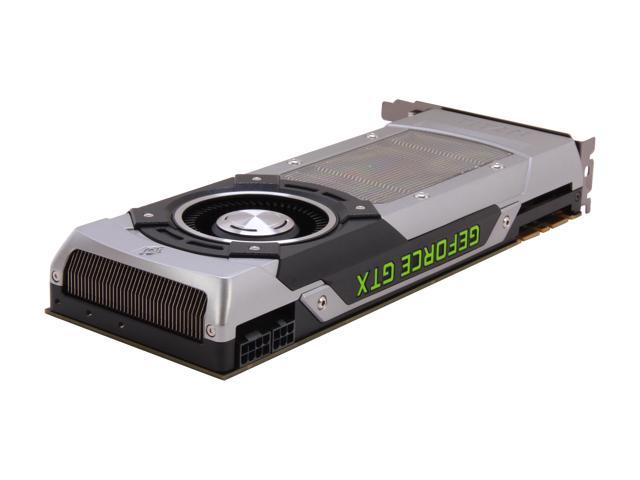 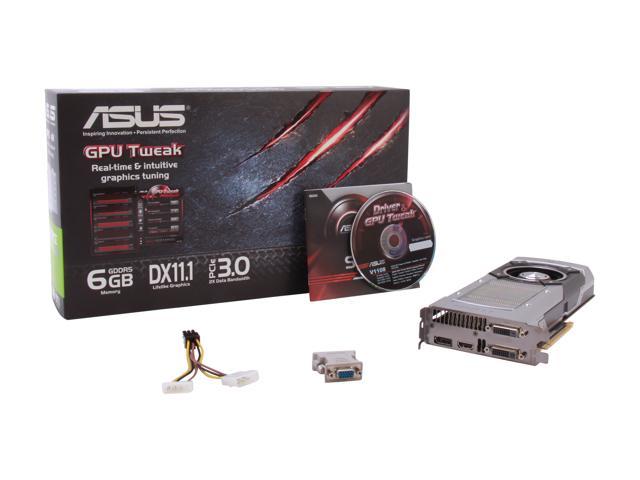 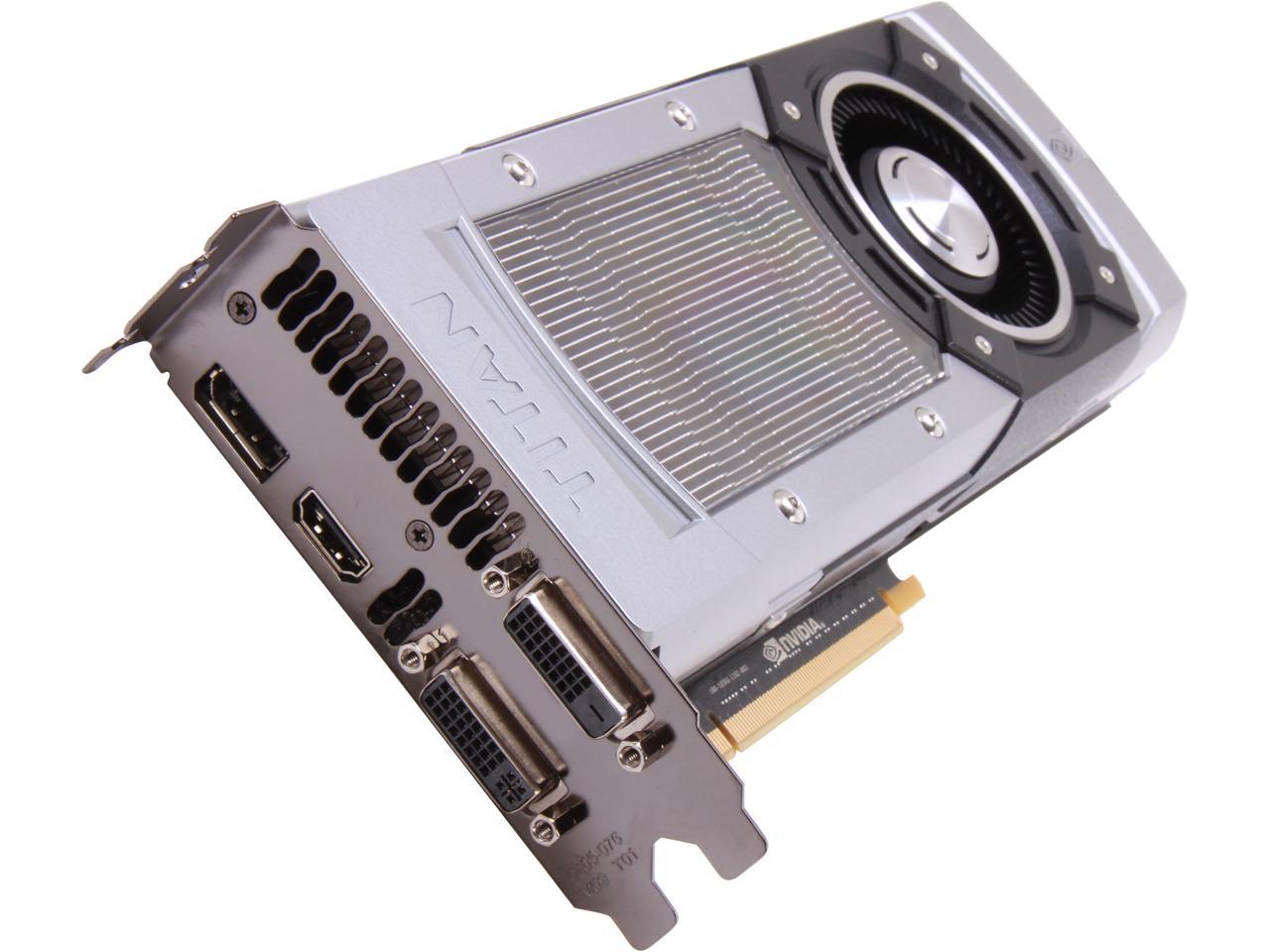 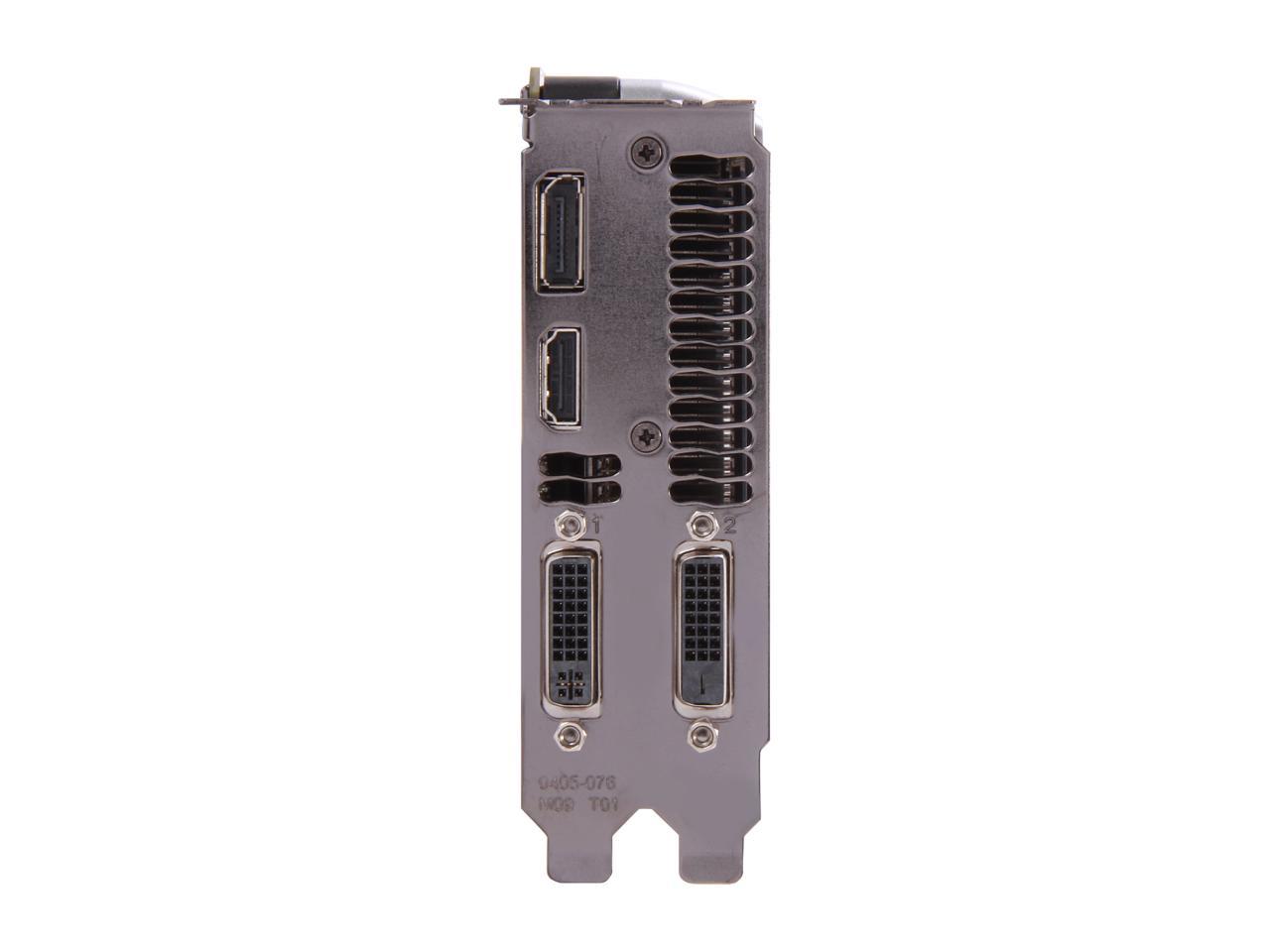 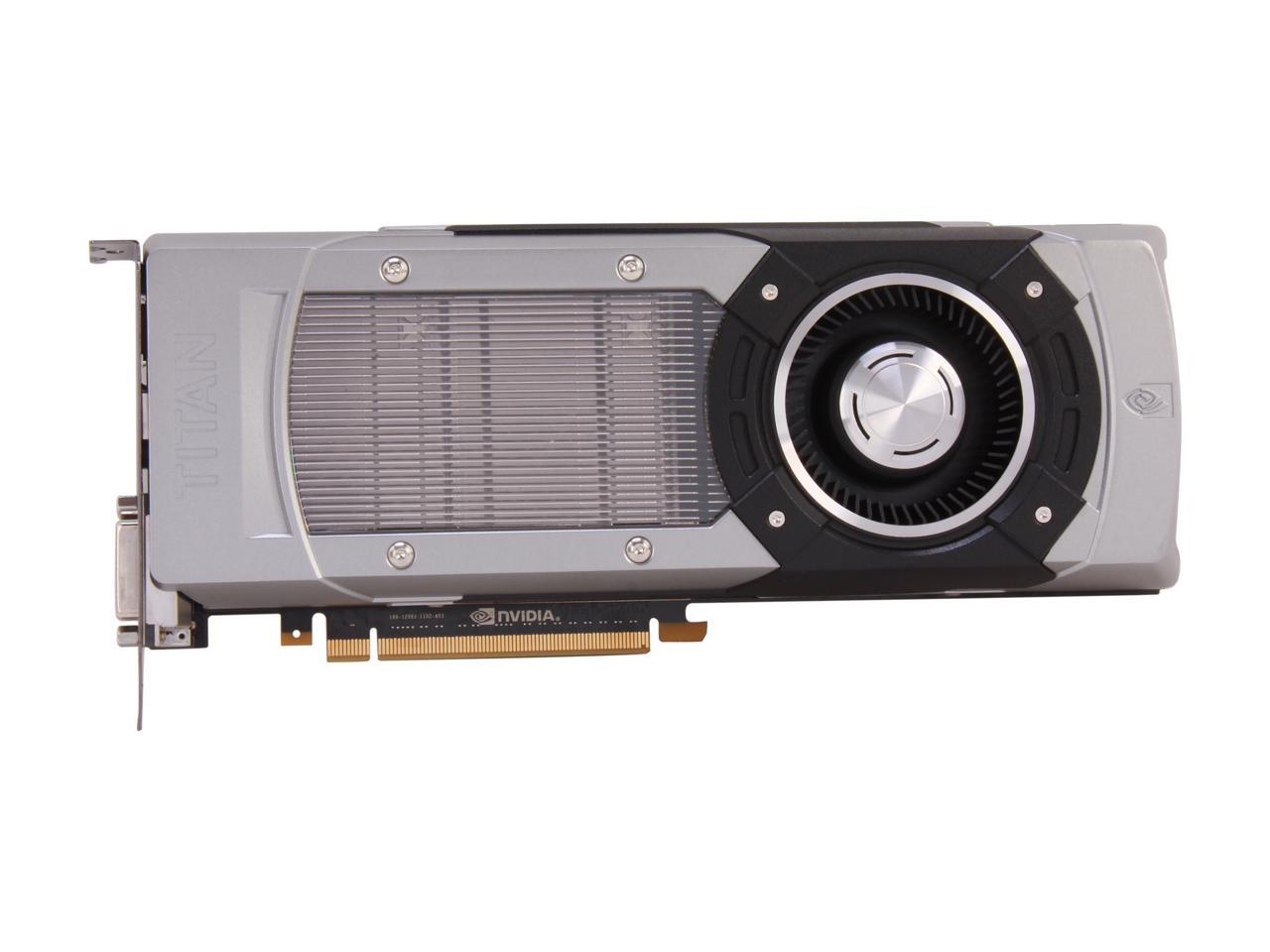 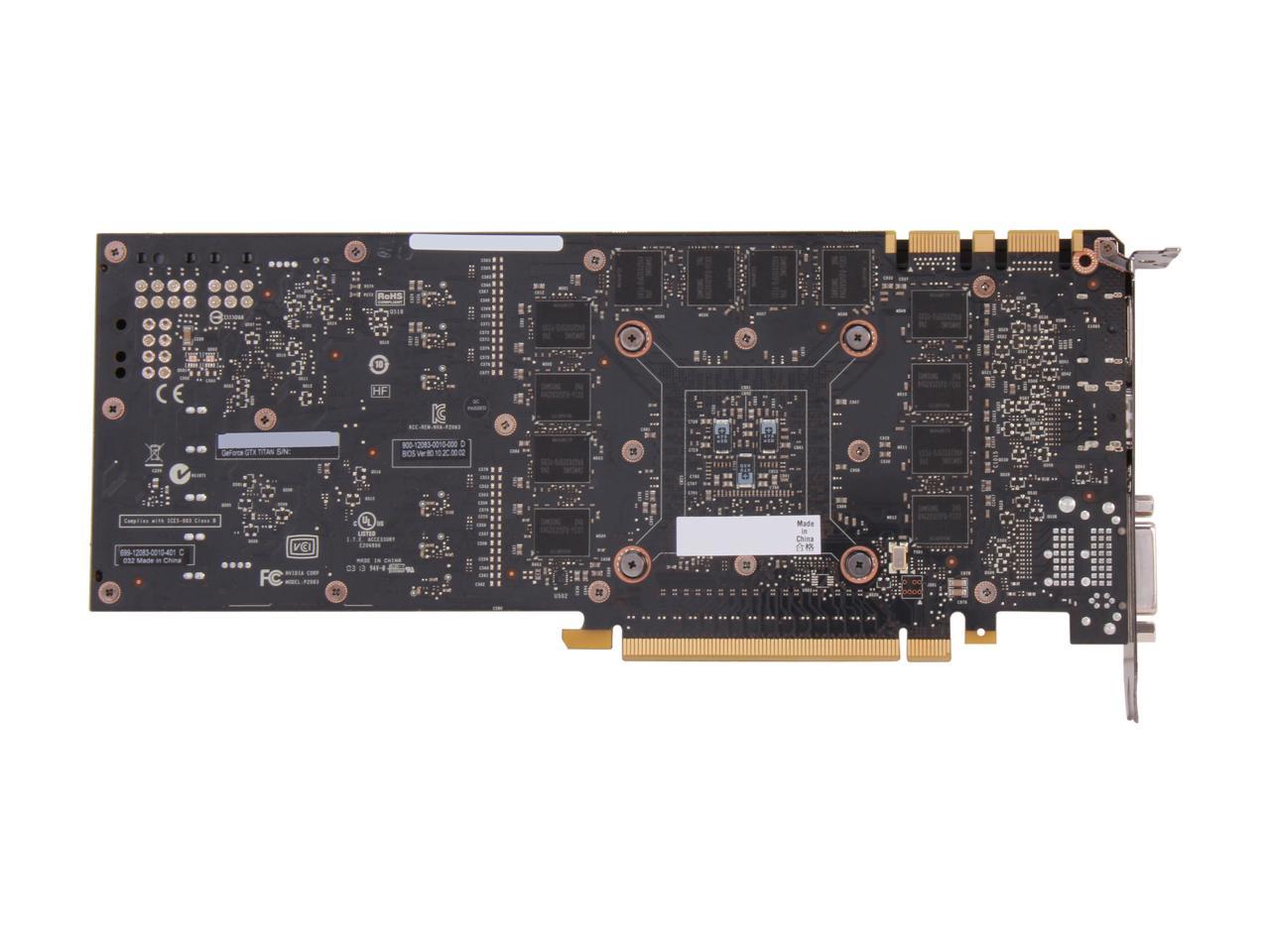 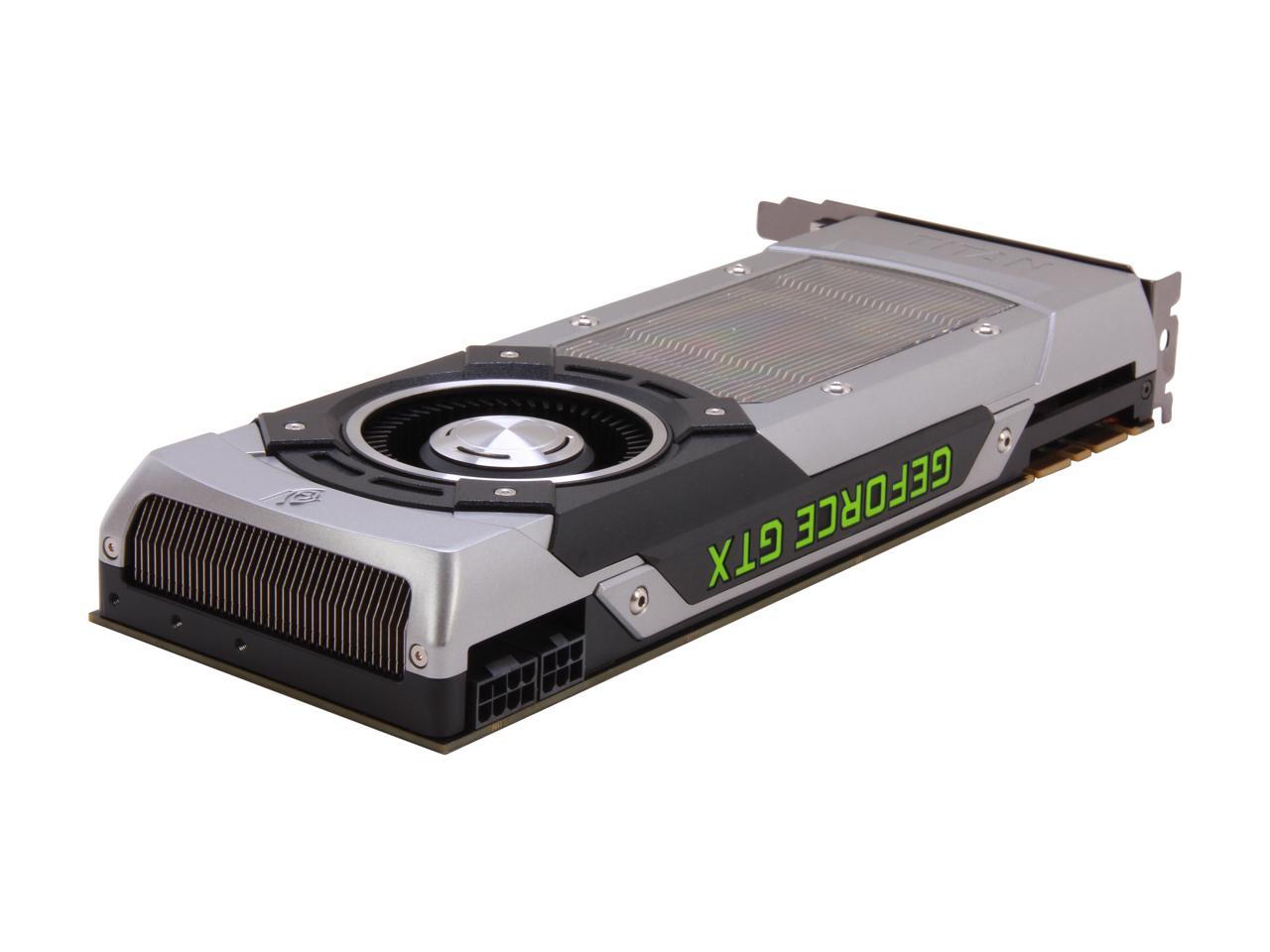 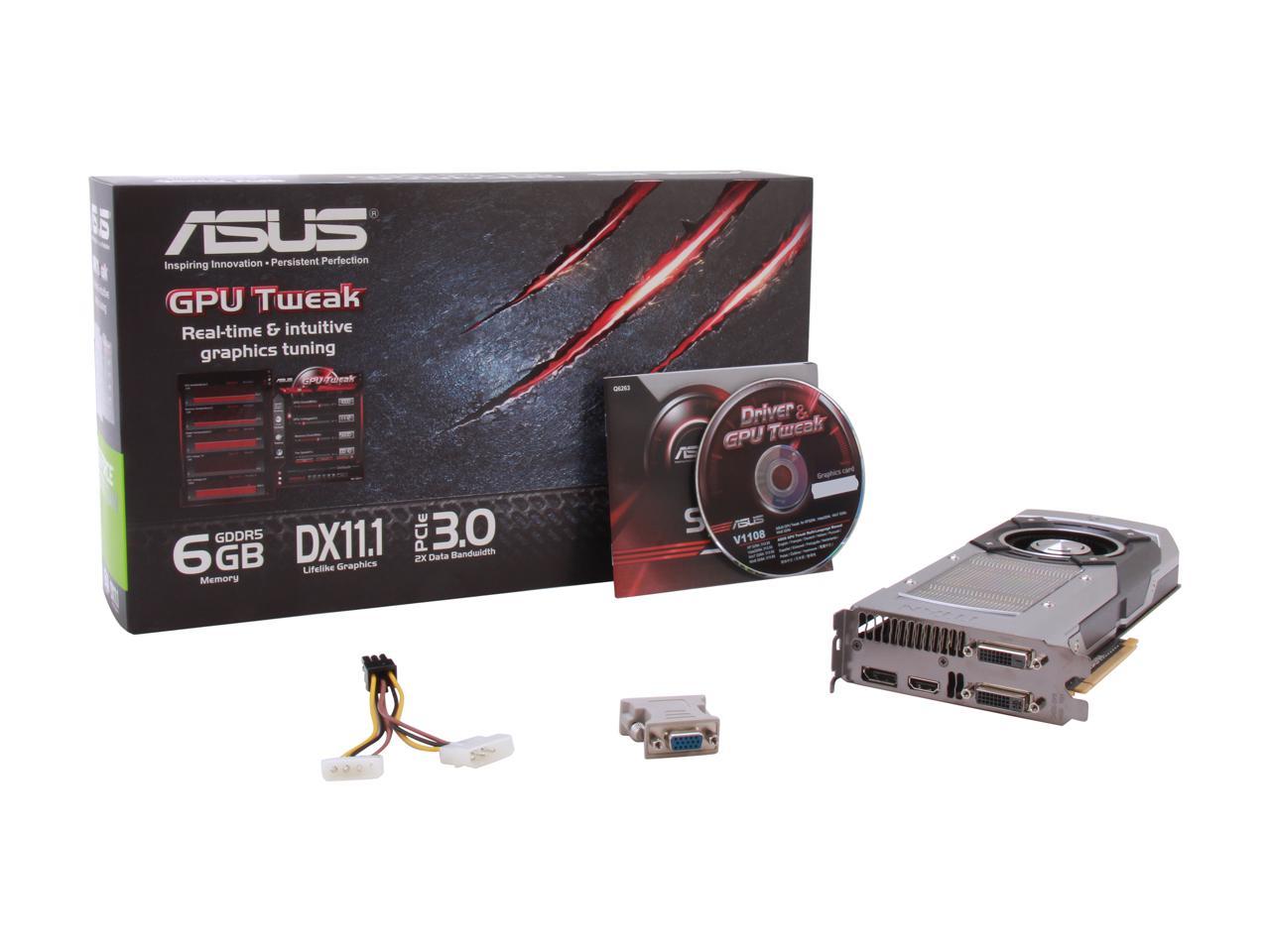 Learn more about the ASUS GTXTITAN-6GD5

Pros: The absolute best gaming experience money can buy at this point. SLI Titans will play anything maxed out, period. Moving up to 3D Surround and there are a few limitations but not many. The only so far is Crysis 3 in 3D Surround and the Witcher 2 with Ubersampling enbaled in 3D Surround. Every other game I've played, 3D capable or not at 5760x1080 40 frames minimum on everything. Running 5760x1080 with maximum settings average frame rates: Bioshock 3 80 FPS, 3D Battlefield 3 55 FPS, Crysis 3 60 FPS, 3D Skyrim 60 FPS, 3D Far Cry 3 60 FPS. V sync enabled of course. The Titan is an excellent overclocker. I was able to acheive a maximum stable GPU clock of 1225 Mhz on air, but I run it at 1150 Mhz when I'm not benchmarking as it just seems to be the sweet spot for this card in my opinion. And the Titans run very cool. I run the fan maxed out because I wear a headset and can't really hear it, however the GPU never exceded 64 C under any conditions and that's in SLI. Very nice looking card. With the glowing Geforce GTX lettering on the side it's immediatley apparent to anyone who sees it that you don't mess around when it comes to PC gaming. I was able to acheive a score of roughly X5400 and P14000 in 3D Mark11 with a single GPU at 1175 Mhz and X10150 and P21200 in SLI at 1225 Mhz. I've been using MSI Afterburner to overclock as I don't like the Asus GPU Tweak software. It limits your clock speeds, where the MSI software does not. I would complain about the price, but when you think about what else is it that could touch this kind of performance and how much would that cost? 3 GTX 680 Classified edition would cost around the same price as two of these and you would get about the samer performance. But you'll get far better scaling with 2 GPUs than 3. Take my word on that. I've run 3 and 4 way GPU configs and I hate anything over 2 GPUs. 3 way SLI isn't bad, but 4 is flat out horrible. If you've got 2 grand to throw down on graphics cards SLI Titans is where it's at. 1 of these bad boys is about as fast as my SLI 3GB GTX 580s that I had previously. These cards support the monitor overclock, but I've never actually tried it. I've read reviews about other people who have got 60 hz monitors into the 80 hz range which is amazing. My monitors, Acer GD235HZ will not go over 120 hz. Not surprising really. They also support TXAA which is an extremely costly setting to run in terms of performance but is absolutely gorgeous and you'll be able to do it with SLI Titans. Execpt Crysis 3. It crippled the frame rate on that game with TXAA enalbed with other settings maxed @1080p. Having 6 GB of VRAM is a bonus. I doubt you'll see that kind of usage for years to come. The most I've seen so far is 2.7 GB of VRAM used.

Cons: Driver issues. Which is to be expected of any new graphics cards. Not usual at all. But I should point out that I can't play Rage because artifacts keep cropping up all over the place. Bioshock 3 crashing randomly. Witcher 2 crashing randomly. And it happens whether I'm overclocked or at factory clocks. I'm also seeing artifacts in Witcher 2 in 3D but not in 2D. Didn't have that with my 580s. The Asus GTX Titan doesn't really come with any goodies included. No free software or any good adpaters or SLI bridges. According to what I've read the cards start to throttle the clock speeds above 70c, from what I understand it's not supposed to occur until 80c. That may be a driver issue that will be fixed later on, or it may not. I've never hit 70c so I don't really care.

Overall Review: I wanted the fastest 2 way SLI setup I could get for running 3D games. As, 3D games don't seem to scale correctly with 3 or more GPUs 2 way SLI is the way to go for 3D. I scored 7th place on Futuremarks website Hall of Fame for 2 GPUs on 3D Mark 11 Extreme preset with SLI Titans. That's the kind of power you get with these cards. I'm no expert. Just a casual user.

Pros: Great performance without having to deal with all the multi GPU issues. Coming from a Xfire setup, the Titan offers the smoothest gameplay I've seen in years. Great looking card and the build quality is what you'd expect from a $1000 card with none of the plasticky look most of the other cards have. Thermal and acoustic performance are top notch. Whisper quiet even under full load.

Cons: Price. The most expensive card I've ever bought. Poor bundle. For that price they could have included at least a couple of good games instead of the useless voucher for F2P games. They could also had a backplate to go with it instead of the bare pcb, for both cooling and aesthetic point of view. The GPU Boost software/drivers are far from perfect and while the overclocking is pretty good (1150 Mhz on average) the software is currently not working exactly as advertised.

Overall Review: Bottom line, buy it if you can afford it and you will have the best gaming experience you can get.

Overall Review: I love this GPU. Previously I had a GTX 590, which would run hot when clean, and overheat when dusty -- and had a lot of instability with some games. Now everything JUST WORKS. All latest games run completely smoothly with all eye candy turned on. Under 100% load running a stress-test, Titan GPU gets up to 81C, drops down to 80C AND STAYS THERE adjusting the clock/voltage just minutely lower to maintain even temp. Only downside was that when first installed, my machine would not boot -- I had to revert back to my old GPU, flash a specific Beta version of my motherboard BIOS, and then switch to my new card. Fortunately, I had done my research ahead of time and was anticipating this issue. I really wanted the best performance possible on a single 1920x1080 monitor with the stability and simplicity of a single GPU. Since switching to this beast, I don't even have to think about performance or stability -- its a given. LOVE IT.

Pros: This is a great card especially if you run programs and games at very high resolutions and turn up the eye candy to max. Many of the games that I had maxed out with my old video card are now perfectly smooth. Planning on putting 2 more in for 3 way SLI. Did I mention they are awesome for running CUDA based programs?

Cons: Expensive. Does it really need to cost as much as a 690? Come on, Nvidia, we can do better than that.

Overall Review: For those of you with the cash, this is a great card to have. Overpriced? Yea. But try telling that to people who buy Ferraris, Bentleys, and Mercedes. Do you need something that expensive? No. But is it nice to have? You bet.

Pros: Single GPU, near 690GTX performance without waiting for SLI tuned driver sets. 6GB VRAM, great if you love to crank up SSAA.

Cons: A more reasonable price would have been $100-200 lower. However, with no competition and considering the target audience (users with multi-monitors and big screens) I guess you can't blame Nvidia for pushing the pricing envelope.

Overall Review: Well worth it if you game at above 1080p or use any extreme image quality settings such as SSAA. At 2560x1600 and this is the first single GPU that packs enough grunt to fully max every game out. The 7970 I had before struggled with some recent games, especially when the AA was turned up. You'll probably still need to go SLI for multi-monitor configurations.

Cons: Not really any

Overall Review: Although the Titan costs a lot it gives you a lot of performance. In fact it is the most powerful GPU on Earth. This GPU is based on the new Kepler Architecture that is used on a super computer Nvidia helped to build. It's like having a gaming supercomputer at home! It fits in my mini-itx case and can DESTROY any game on the highest settings.

Pros: -Fantastic powerhouse card. Runs everything on max settings and, some games easily over 100 fps without breaking a sweat. -Solid-feeling blower, looks like something taken out of a performance vehicle. Looks awesome inside my CM Stryker case. -Came with Metro: Last Light. Great game to benchmark it on. -Runs nice and quiet at idle, and even on full load doesn't get very loud. -Runs cool even for a blower design. After a few hours of Metro Last Light, it's never running hotter than 73 degrees C, and the Fan Speed is barely around 60% speed at this point.. -Low power use. Powering this card with an AMD FX-8350 with a 750W power supply and doing just fine.

Cons: -Very long card. Barely had room for it inside my old CoolerMaster 690 case, and the cooling on it definitely benefits more from having that extra space. -The price. -Despite how awesome it is, doesn't play games on its own or fetch a soda, or even get hot enough to make eggs. -Only reference coolers. No MSI or ASUS style coolers available presently (to my knowledge), but the cooling solution on it works quite well, so not necessarily a con as much as a difference in preference.

Overall Review: Great card, while it remains to be seen if it was worth the high price tag, I'm at least self-assured I won't have to upgrade it for a very long time.

Pros: Best single GPU solution there is. Runs very quiet and cool. Draws very little power for such a powerhouse.

Cons: The card still can't play every game out there "maxed" out with a 2560 x 1440 monitor and maintain 60fps. The bios and drivers for this card needs an update. They will "throttle" themselves back as temperature approach 70 degrees F.

Overall Review: Got one of these with the first batch that came out, but waited to see if some updates would be released before I wrote my review. These cards should be able to give us so much more. Hopefully a bios update and new drivers will give us what we wanted with these cards.